I must be the last living KL Blogger who had never been to this place, ... well, to be honest, I wasn't really a diehard fan of the famed Bayswater outlet in Queensway. I preferred the other Chinese eateries along the same road, like Hung Toa, and Kam Tong. But since the sterling has soared to RM7 to the pound, and although it has dropped back to around RM5.5, I haven't been to visit the Queen since 2005, so one has no choice but to replicate one's anglophile needs here in colonial KL. Marks & Spencers, ......Harrods (I still haven't been to the KLCC outlet), ....Victoria Station, ....(kidding), and now, Four Seasons of Bayswater.
The Everybody Loves Raymond group hasn't met up in awhile, and when the list of possible to eat at places was sent out via email, there was a resounding aye to meet here.

For starters, I didn't even know this Capsquare place existed...I mean, I did know, but I didn't know it existed in its present form. It actually looks quite nice. Although it was very quiet at night, I quite liked the ambience of the entire area. Good dinner venue, easy parking, etc.

Surprisingly, we were one of the only tables there that Monday night. However, I am sure the place must fill up at lunch time.

Nothing warms the heart more than seeing a whole range of meats strung up, waiting to be eaten. Actually, yesterday, while lunching at a coffee shop in Lucky Gardens (Nam Chuan), I was counting the chickens (after they hatched) at the chicken rice shop. Wow, just running some quick numbers through my non-Chinese educated and math impedimented brain, I'd say the chicken rice man was into some serious money! He can probably send his kid to study in London and ask them to eat 4 Seasons Duck rice there every day. I digress.

The brinjal hotpot with mince meat is always a favourite, wherever and whenever. If you like brinjal that is. Brinjal. Somehow brinjal sounds so much less exotic than Aubergine or even Egg Plant. What's in a name right. Problem with these dishes, they were all screaming out for rice the way a damsel in distress screams for her prince charming to save her from an ivory tower.

Sweet & Sour Prawns. Truth be told, I have always thought sweet & sour was the "ngak gwai low" golden standard. Which true blooded Han chinese eats sweet and sour ?.... however, there are sometimes when a good sweet and sour dish really adds flavour to complete the entire range of tastes.....the prawns were fresh, and crunchy, and this was a pleasing dish.

I presume this was Hong Kong Choy Sum. Though why Hong Kong, of all places, should be deemed a paradise for growing vegetables, is beyond me. I'd have thought with so little land, growing choy sum wouldn't be high on their GDP earning list. Well, veg is veg. As long as its not too old, and chewy, it's fine by me. Actually I don't even mind old and chewy. I'm a simple person.

Can't remember what taufu dish this was, but I remember it was one of their signature ones, and it was good. Bits of fish paste I think it was. (that's the problem blogging more than a week after the event....these grey cells have been ravaged by alcohol and retain less memory than an outdated pentium)...

Does this dish need an introduction? The layers of fat, sandwiched between the lean, beckon like an old friend. Actually, someone commented it wasn't fat enough. True, but thankfully so. Again, another dish that just yells, RICE PLEASE.

Charsiu, one of the mandatory litmus tests of any roasts place. On a scale of 1-10, I'd give it an 8. Pretty good, and a good balance of lean and fat. A conversation ensued about how it's impossible to find fatty charsiu in Singapore.

Hairy Berry, is that true? (very deja vu, I think we've had this conversation before)

My second attempt at a Red Velvet cake. I seem to have major problems with preventing my creams from melting. Maybe because this was put together in haste, and it was like building a house on shifting sands, and the blardy cake nearly collapsed. Fortunately we weren't there for the aesthetics and I think the cake tasted quite good. Well, I gave the remaining quarter to Thamby to try.

Ah, how could I forget their piece de resistance, the famed Roast Duck. Well, let's not compare with the ducks in UK I reckon. I actually find the UK ducks a bit TOO fat (gasp, is that possible!) for my liking, and this one here more suited to my palate. Although the ducks hang around greeting arriving guests in the front, they aren't just chopped up and served immediately. I think they are slowly roasted again slightly, so that its warm, and the skin almost cripsy. Very good. No complaints whatsoever. 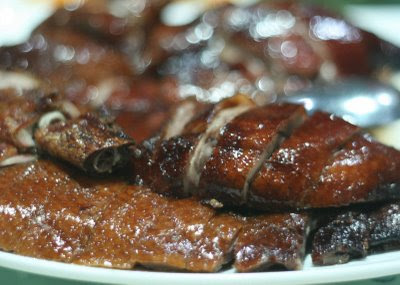 Definitely worth a visit. In fact, I went again with my folks 6 days later. Didn't bring camera though. Do try out the see chiu ngau hor too.

Posted by fatboybakes at 9:52 AM

wah the pork is calling my name! gosh. its only 11.15am and i cant control my saliva already

I will have to correct you...I am the last KL blogger to visit this place...haha...still haven't been...looks good tho!

the duck is too skinny i tell you..they shud import some fat london duckies over for god sake..

esp after all that running, my body been screaming for carbs..

I haven't been. Like you, I keep forgetting Cap Square exists. I've been there once and it was pleasant enough. Just don't have more of a reason to go there. Not even the lure of 4 seasons. Mind you, I don't think it was ever that great. It was just that it was so comforting to sink my teeth into that fat, juicy duck and steaming hot plate of white rice drowned in duck gravy and token Chinese lettuce while its cold and miserable outside the restaurant. Aaaahhh....

Fat duck (how does heston do his duck, I wonder), lean duck - as long as it is roast duck, tis good duck!!

*reminiscing abt the juicy duck as per pap's description*

I'll be back to say hello to siew ngap in July-Aug.

Somehow I did not find it that impressive. Gimme sei-ngan-chai's or Sunrise's anytime.

We're all same same la...all late in visiting...funny how we decided to visit at the same time hor? I wasn't impressed with the roasted meats at all (char siu, siew yoke). The duck was okay la...crisp skin, tasty enuff. The highlight of the visit was the chilli paste.

pssttt i hvnt been leh even though it's kinda close to my opis :P

There is nothing quite like duck grease. I could have duck grease plain with white rice I think. Sweet and sour prawns are a firm favourite, even if they are a reminder of the Chinese colonial cousins and that their real home is the token Chinese stall in every food court overseas, brighter and more orange than the last one!

Red Velvet cake looks good. Must give that a try one day. I thought the duck was so so, still miss those fat juicy birds in London!

"The brinjal hotpot with mince meat is always a favourite, wherever and whenever."

Is it weird to say "Me too" repeatedly? Coe me love it too. :) And a good "Ham Yue Fah Lam" gets the appetite rolling too.

And what's wrong with your red/brown velvet!?!?1 Looks perfect to me ya know! Good job. So when can start ordering?

know the place... but never been there. THe closest I ever got to this place is Pink Sage at Wisma RA or Yut Kee @ Dang Wangi.. hahaha!!!
You ARE not the last blogger man... I am!

TOO FAT DUCK?? I think it's too skinny for me la!

Mm yes, I'm currently living in London and my boyfriend lives within walking distance from Four Seansons! Don't really eat there very often though, I fear from my arteries and my student budget, heh. But yeah it really is lovely!

Hahha..verdict is YOU R NOT the last one. blogger or flogger!
me think ur red velvet looks alrite. perhaps not so many layer of cream might help to keep it upright? ;0)
JHP's ones are muffin-shaped mahh, so it didnt topple.

TNG, okay okay, i aint the last, by the looks of it. just felt like the last.

jaslyn, lucky you! london is such a happening place to be. (mind you, not sure i actually want to LIVE there).

thule, at least you got excuse ma, new baby, live out of town, etc etc...

qwazymoneky, actually red velvet is already available for sale. bald eagle was the first to order it.

boo, suddenly i got a craving for goose. lets go.

550ml, haha, yeah, one of my new acquaintances, a chef, apparently was looking for copious amounts of duck fat to whip up some dish....

BABE!!!! Shocking!!!! no excuse. but aiya, take your time la, guess it should be there for awhile.

thamby, ooh, the charsiu was very good when we were there. aiya, maybe your standards too high la, oh queen gourmet...bow bow bow...

tummythoz, sunrise is where again?

GFAD, whats missing? oomph in my prose? ARGHHHHHHHHHHH! NOOOOOOO!
who is heston ??? charlton? was he into duck?

alexandra, haha, by now you'd realise the place is fraught with very MIXED reviews from bloggers. so best not to crank up the expectations when you do go.

xin, haha, hope you managed to satisfy your craving.

hav to c how when i get back to hk..plenty of walking though..

and I haven't been there yet. :P

funny that i can relate to the Indian food in London more than those ducks and wantons. i think i has got to do with the cold weather la. i mean, we always crave for curry and not roasted duck on those rainy nights in kl mah..hehehe...

as for the lean char siu, ya lor, i've not eaten a piece of really fat char siew in singapore. maybe i should go find some with unkaleong tonight. just to prove if it's a myth or a fact.

we din get to eat the mui choi pork belly on monkeys' day out. looks very good la! yums!

The duck is totally the main dish we want a piece of.

I want Bayswater, oops Four Seasons ... yummmmmmmm! Can't believe I have yet to actually go to this CapSquare outlet :-(