Let it never be said that Chef Frankie Woo of Gu Yue Tien is not creative.  In all my years of munching and crunching on Yee Sang, I have never chanced upon this particular version, which if you look CAREFULLY, are deep fried pipefish... which also lends credence to the theory that Chinese do eat everything. 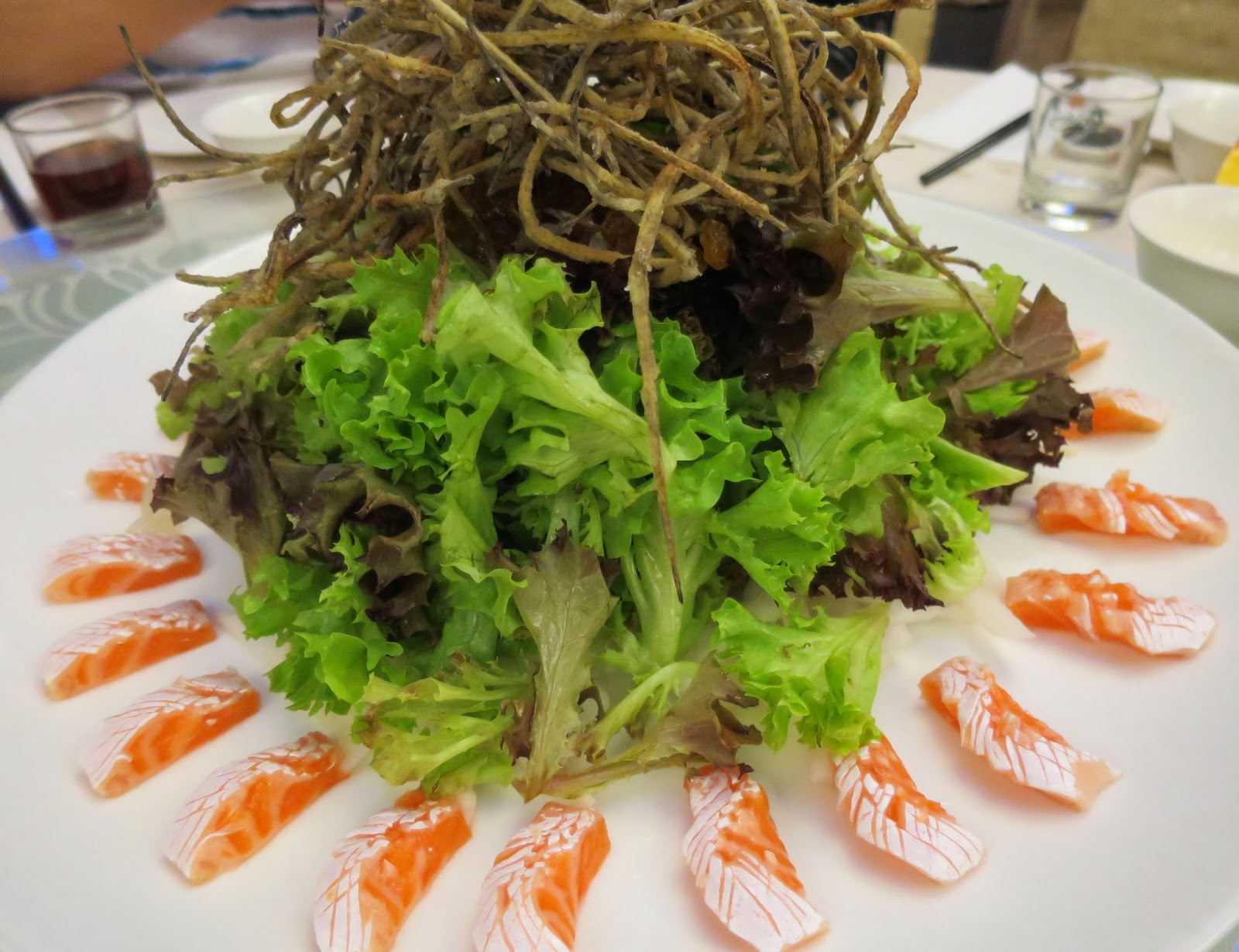 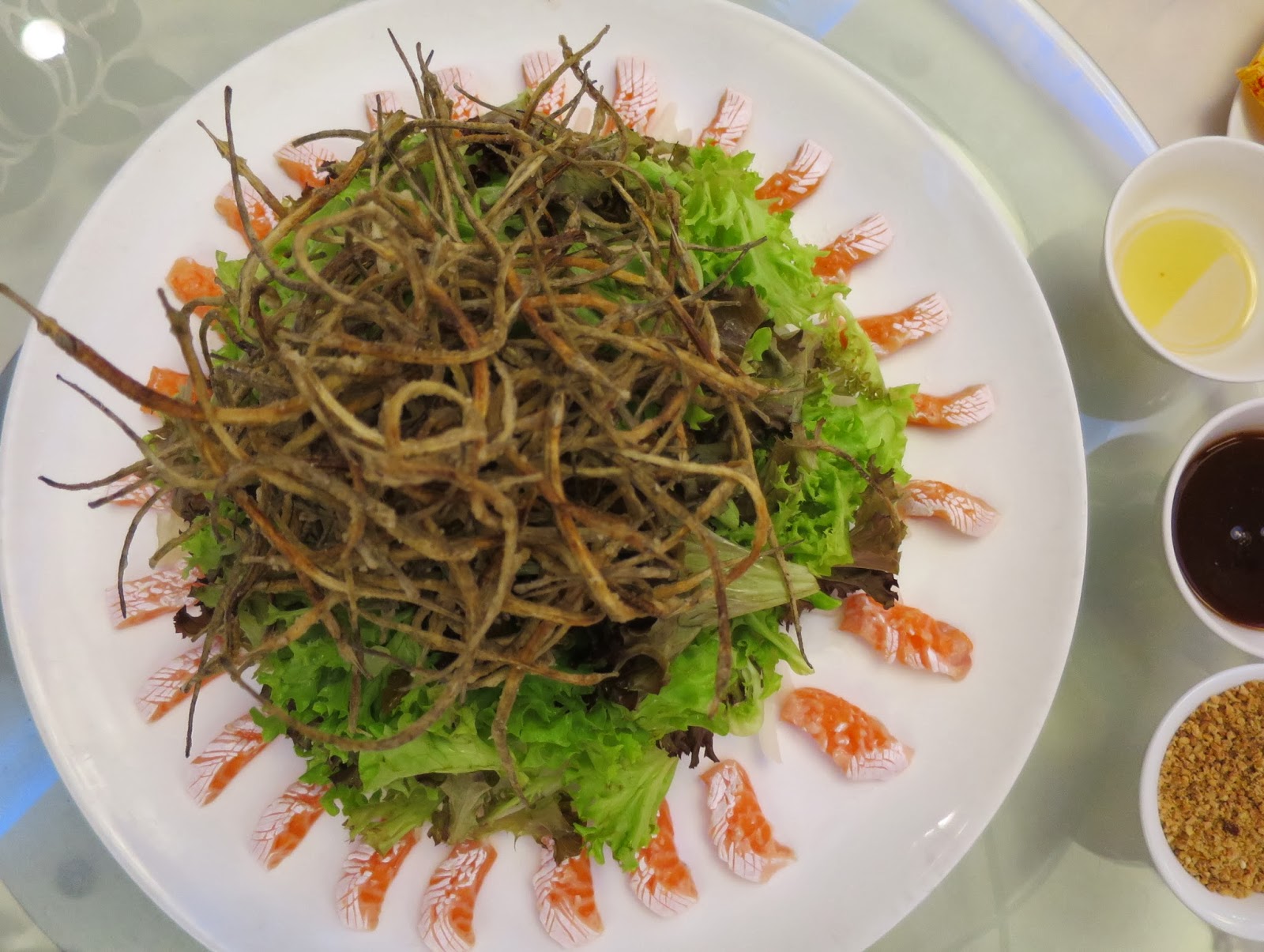 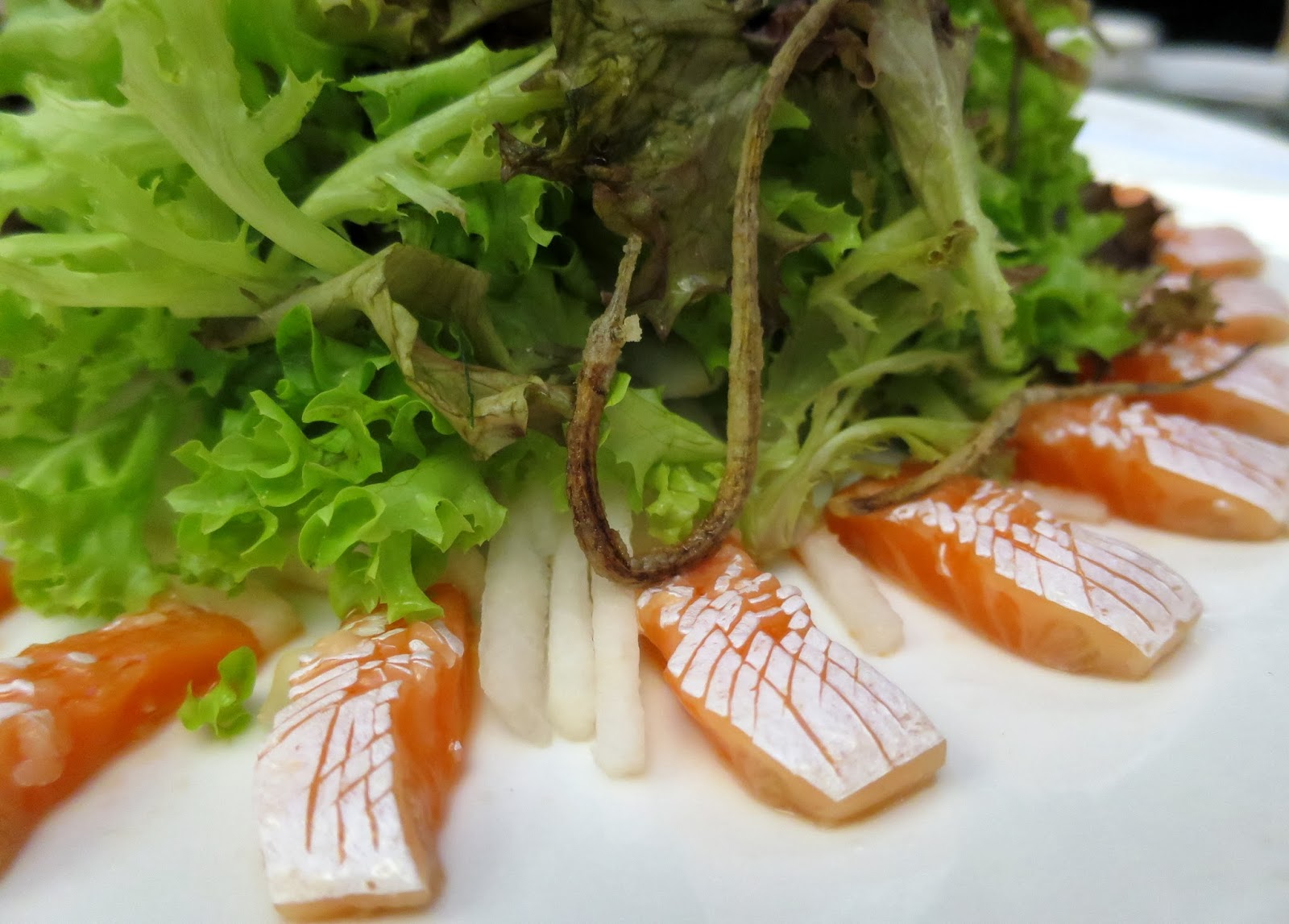 To be absolutey honest, I did not care much for the taste of the pipefish, which I found a bit too "sang", (fishy), but the rest of the dish was yummy, not in the traditional yee sang sort of way, but more like a salad.  Bunches of frisee, with julienned chinese pear and lovely generous chunks of salmon sashimi, with their own special sauce, made for a lovely appetiser. 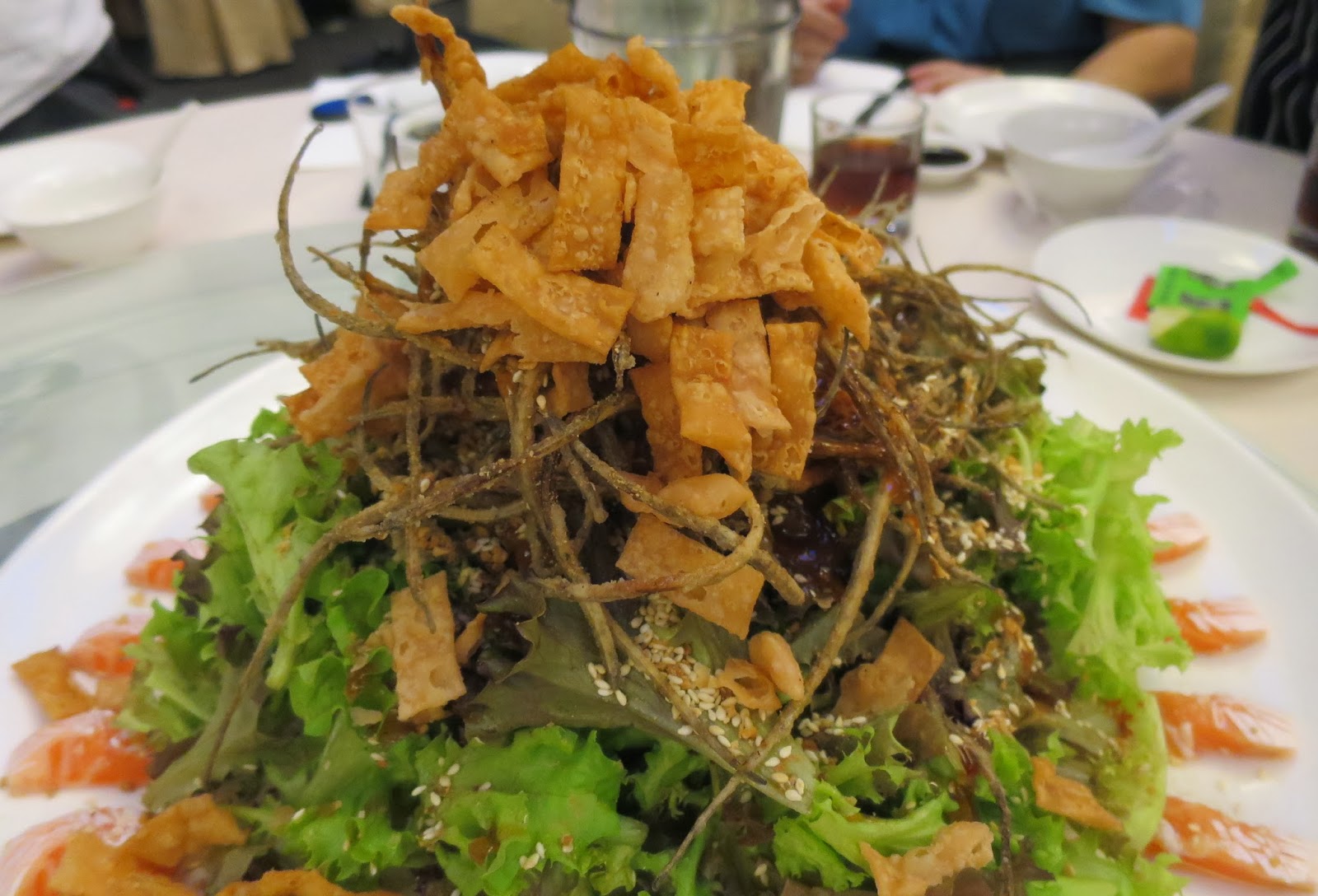 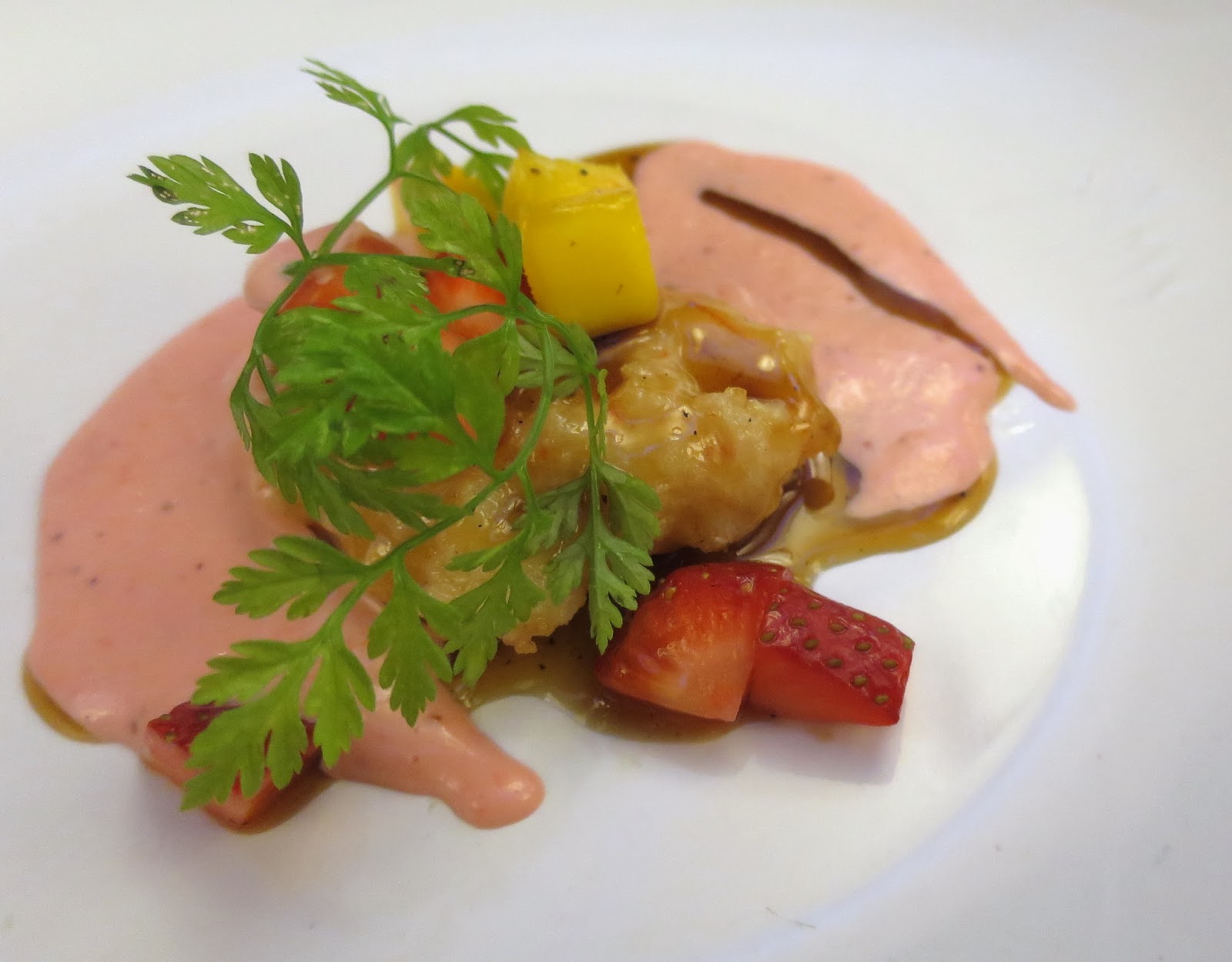 A battered prawn cake with strawberry sauce.  Strange bedfellows, but typical of the creative genius of the Chef, who obviously does not stick to the conventional.  And what is life if not for variety.  I usually roll my eyes in exasperation when the less culinarily adventurous souls shudder at any combination remotely different from conventional norms.  Salty caramel???  Gasp.  But sweet and sour is hardly a combination new to the chinese palate I'm sure. 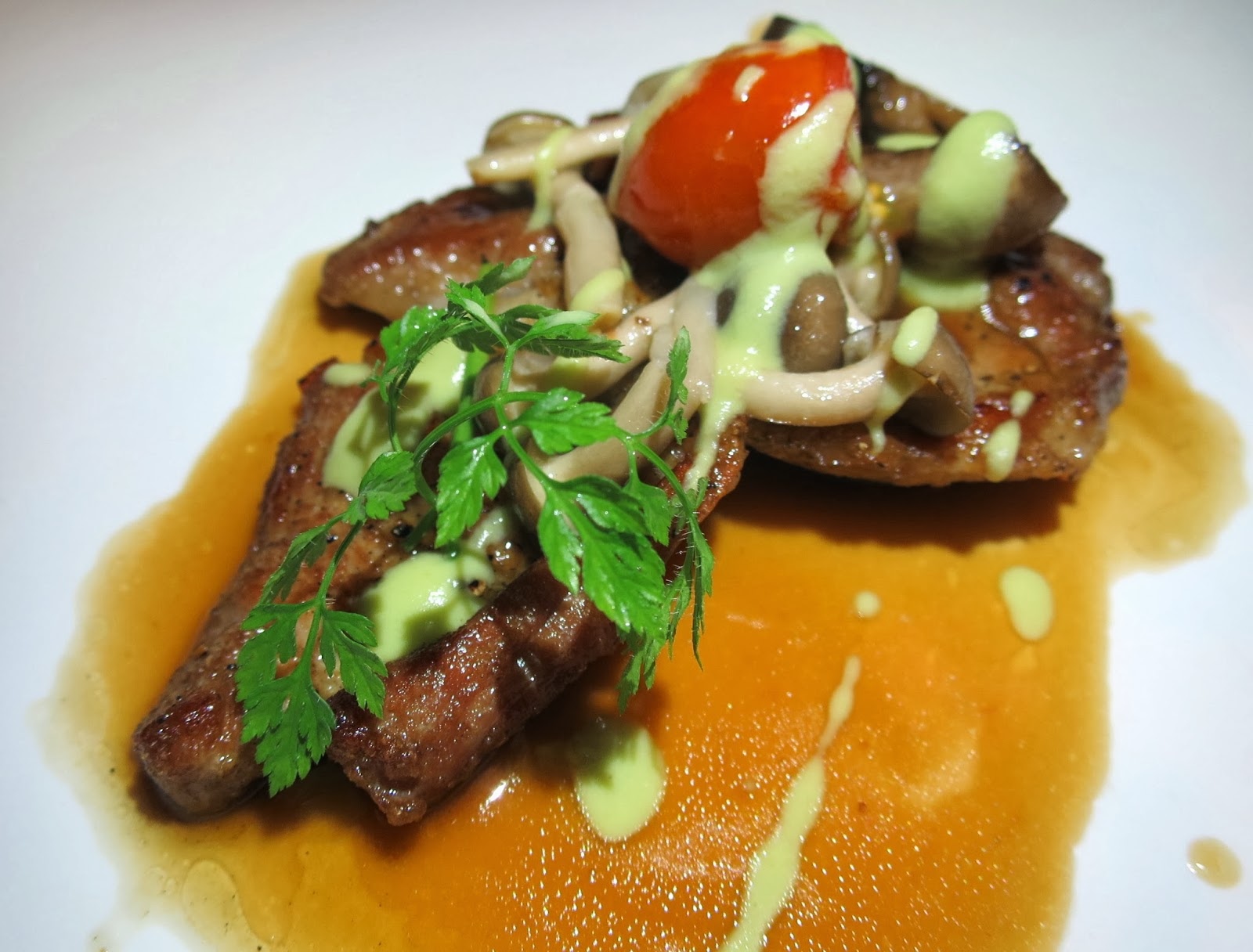 Iberico Pork Neck With Mushrooms and Wasabi Sauce.  I could and would have whacked a double portion of this, had it not been for the fact that I was in polite company, ie, Makan Fairy Godmother and friends.  Moist, melt in the mouth pork, with sauces that titillate the palate, with the added fire from the wasabi. 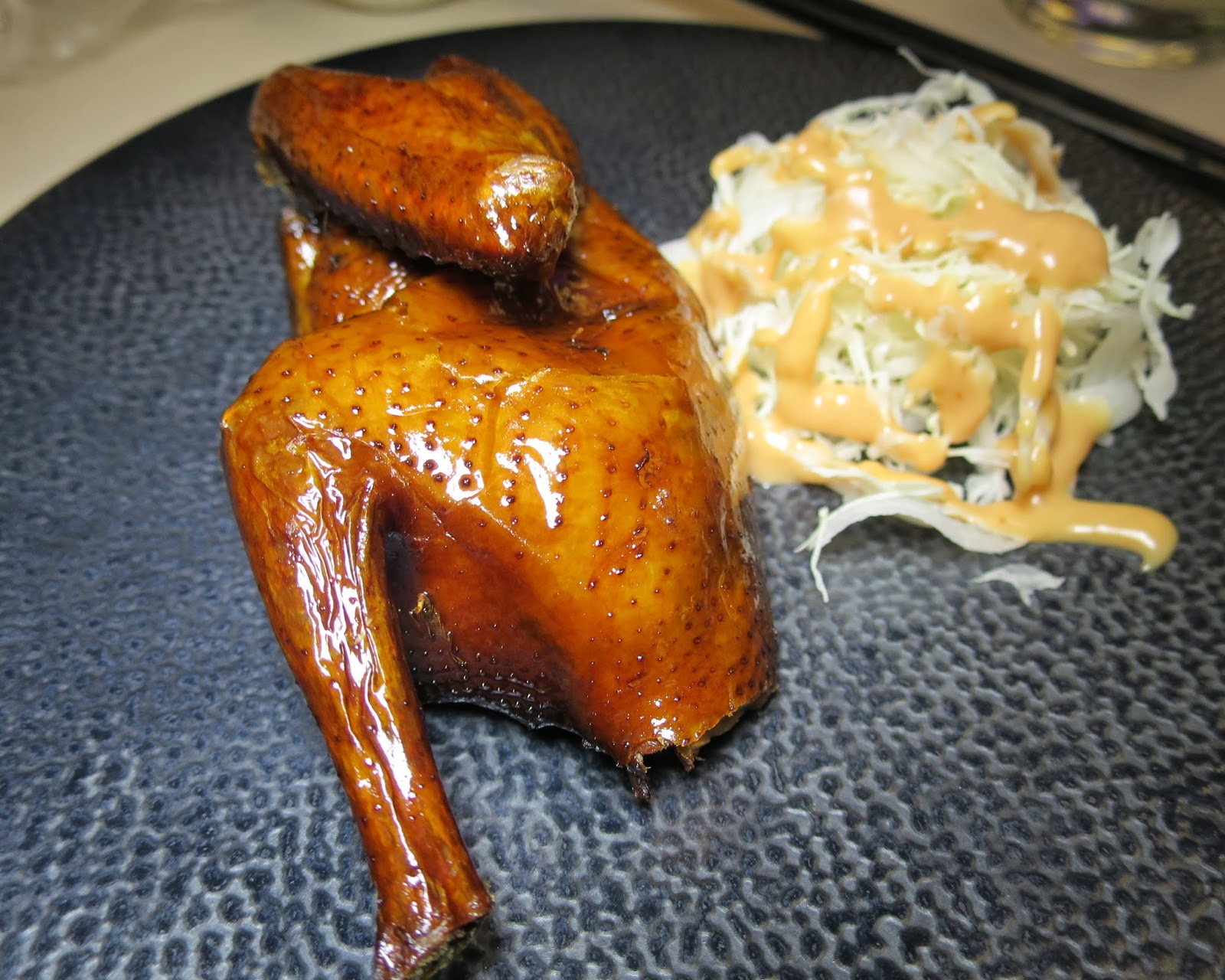 And just when we were bemoaning the shutting down of another favourite place, Richwell, which used to serve lovely Shatin pigeon, look what came a homing down to us.  Roasted Pigeon.  Just looking at that glistening skin, was even to make my heart flutter, much like the pigeon was doing earlier that day.  I generally like fowl in most forms, quails, pigeon, duck, chicken, geese, ...occasionally parts of turkey (the bird, not the country) if it's not drier than the sahara.  (the desert).  The pigeon, roasted to perfection, is such an elegant dish, I feel.  The slight gaminess of the meat makes it different. 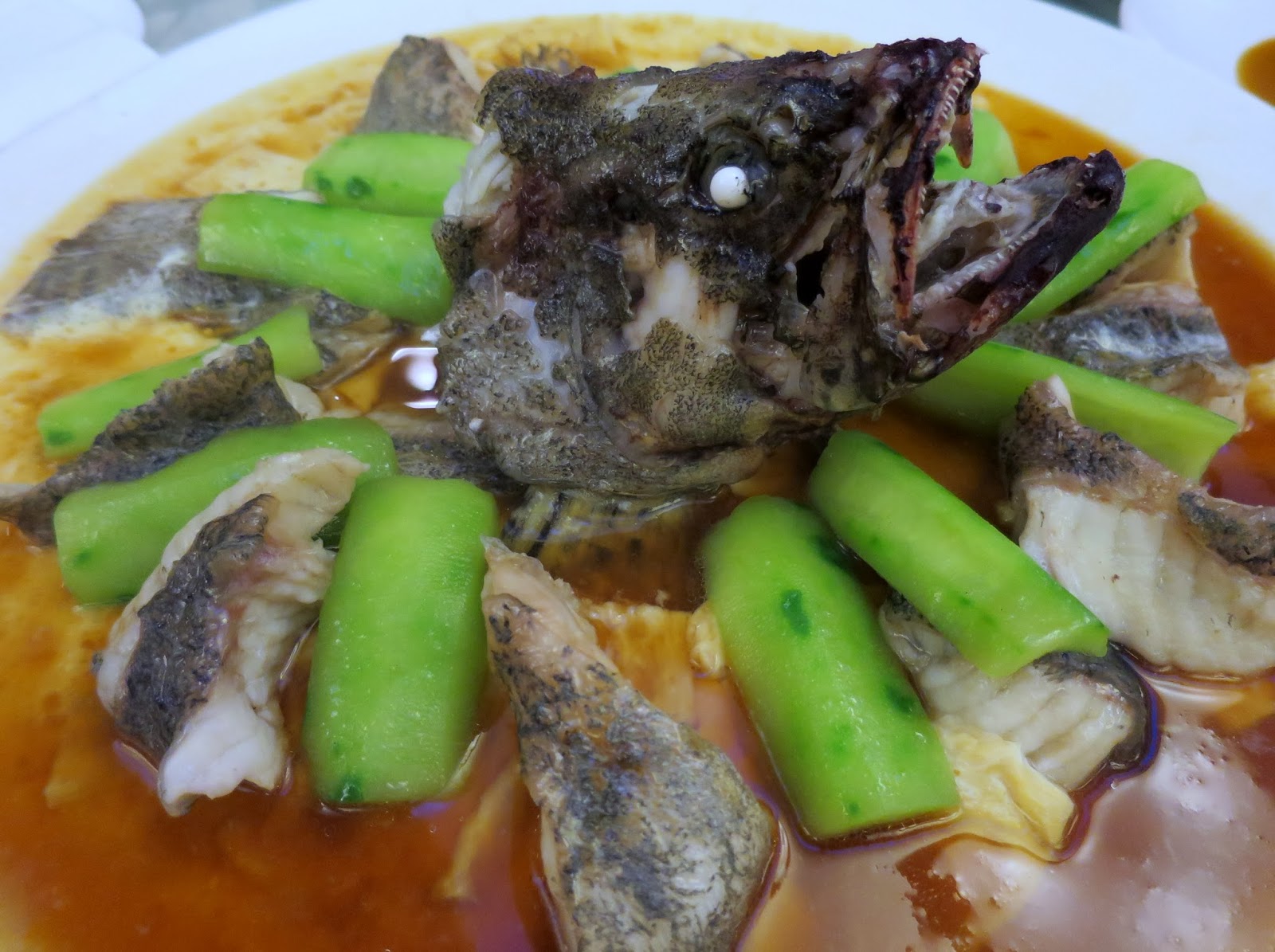 A rather angry looking Steamed Garoupa With Ketola and Beancurd skin.  Fresh slices of this deep sea fish, in a gorgeous broth that one could just drink and slurp on its own.  I never particularly liked Ketola when I was growing up, but that's because we used to eat the entire thing, that fibrous loofah with the seeds as well.  I love Ketola now. 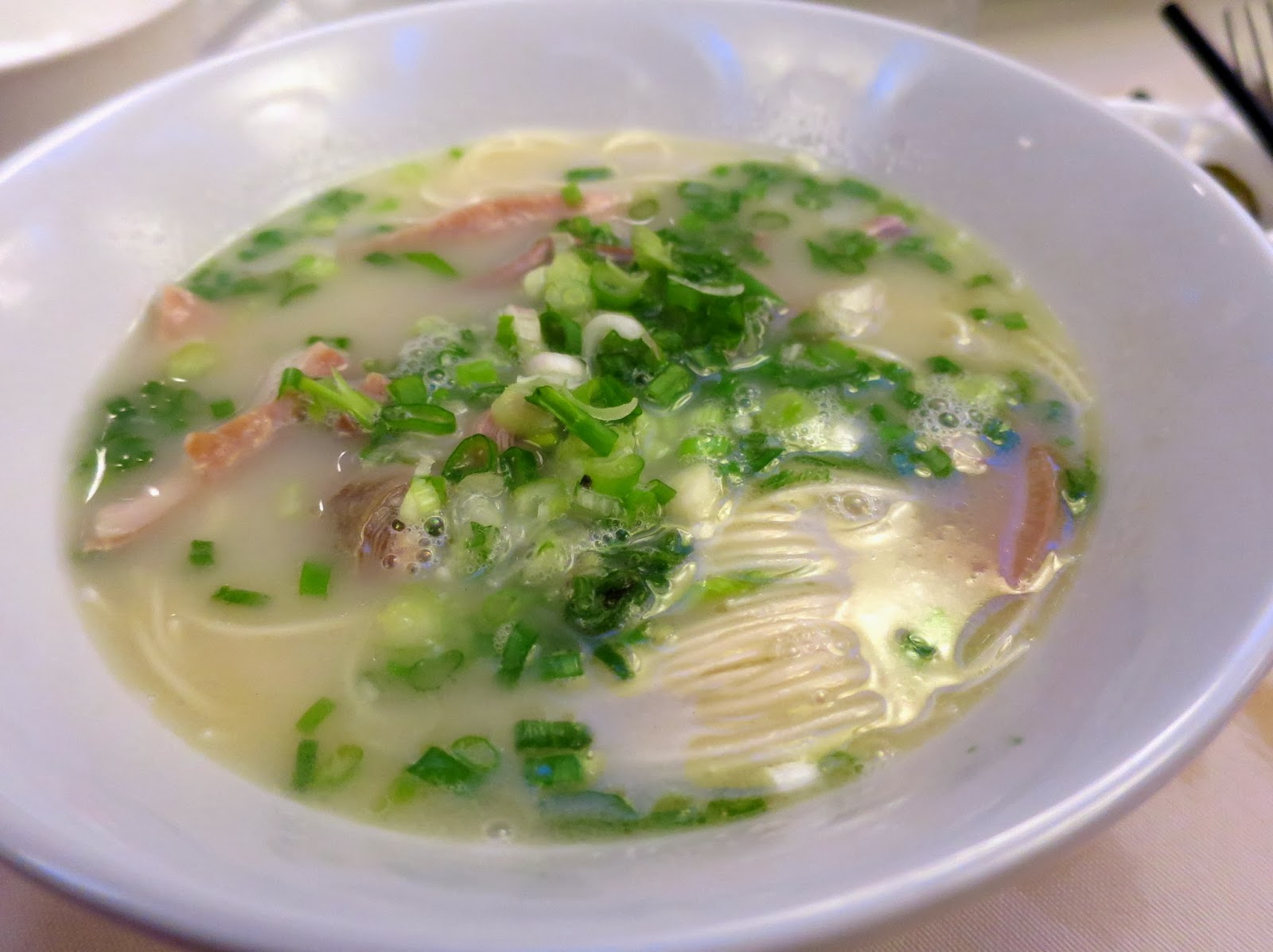 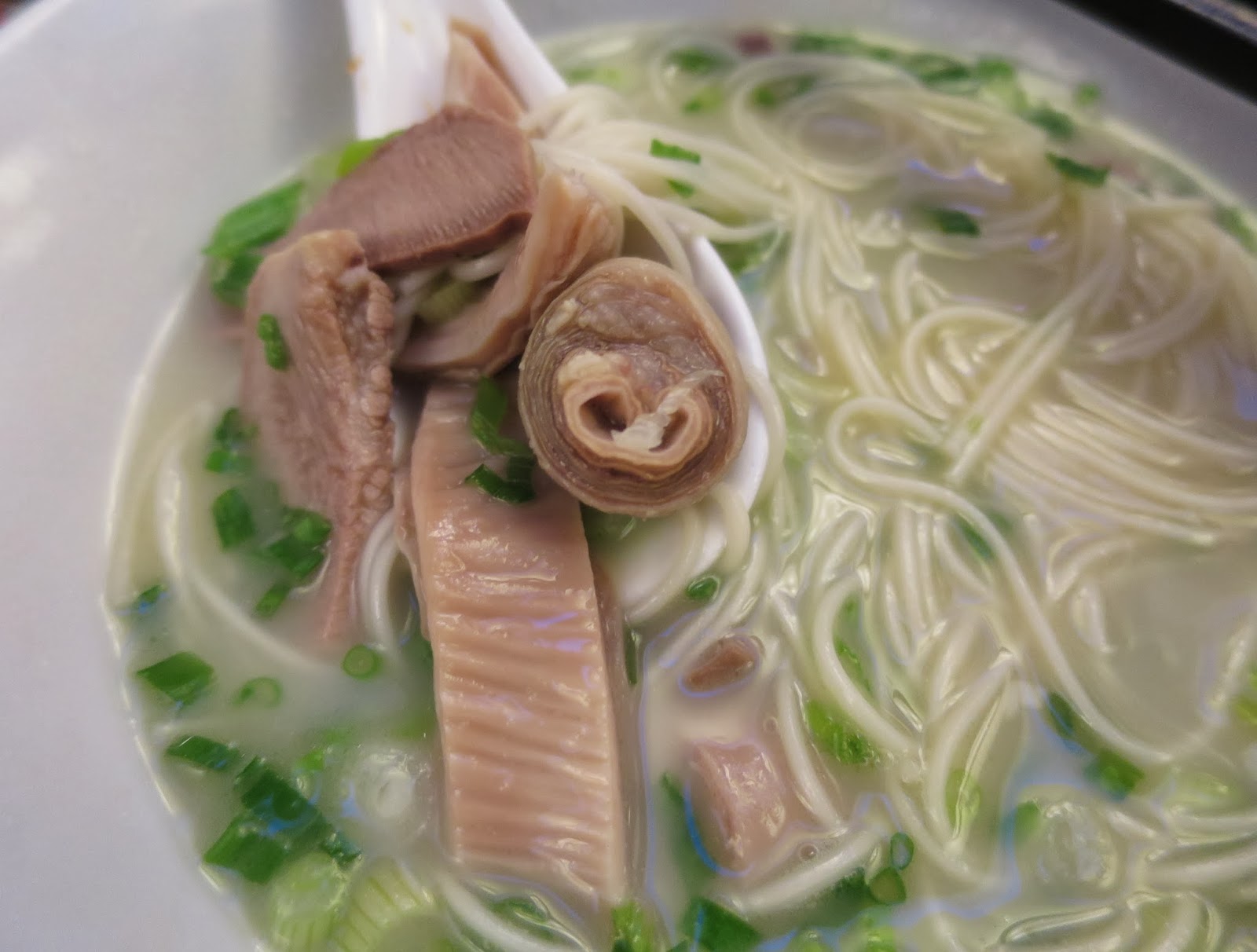 The most incredible pork offal soup, with longevity noodles.  Slices of pork stomach, intestines that are stuffed in multiple layers, in a tantalizingly fiery peppery soup, that really packs the proverbial punch.  I could eat this alone and be very contented. 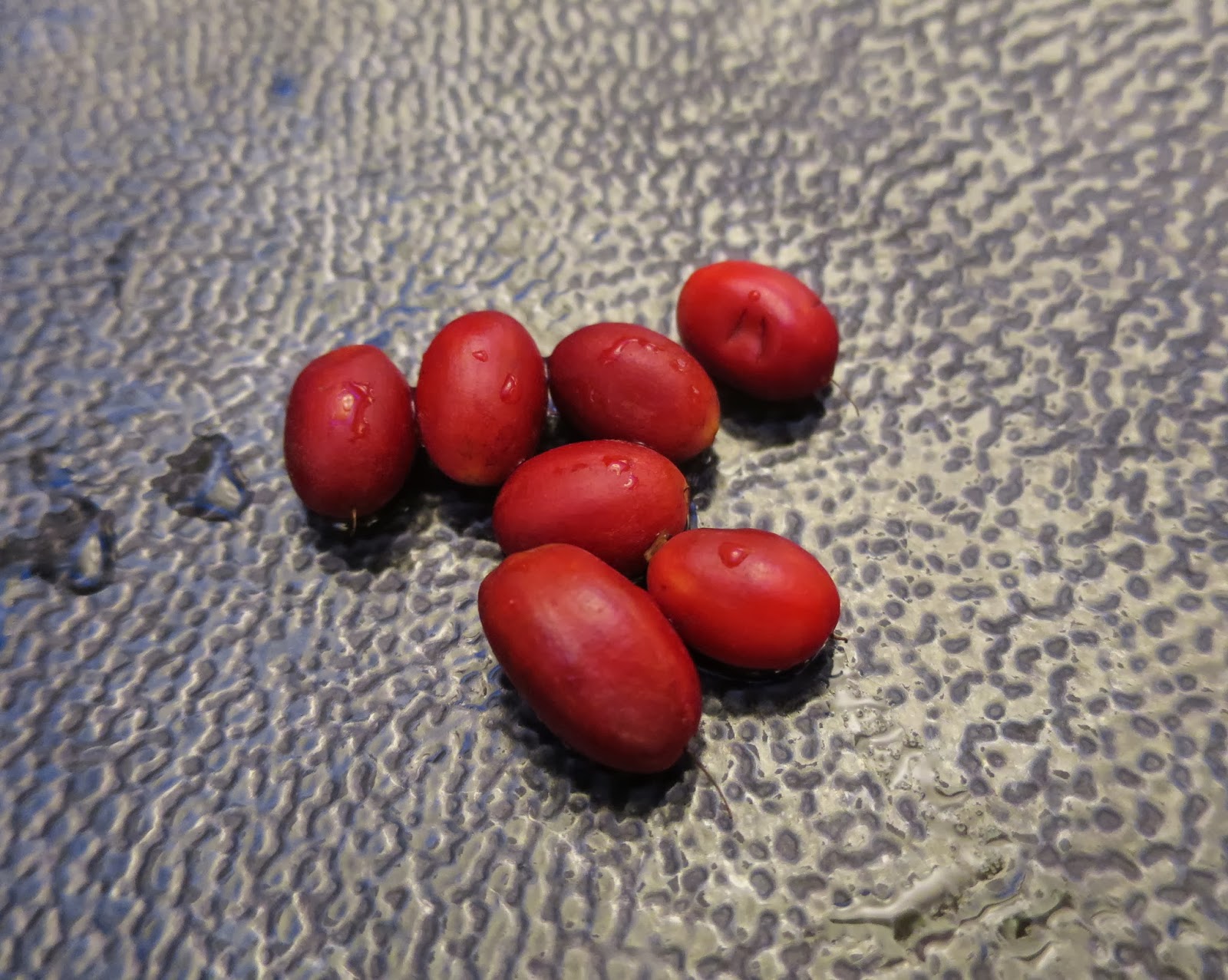 And for the finale, a little magic show, so to speak, with these magic berries, (no, they're not the magic beans from Jack's beanstalk), that on it's own, do not taste like anything evocative, but they have the ability to alter your tastebuds, so that bitter and sour tastes sweet.  Believe it not?  Well, I was a skeptic, but am now a believer.  Chef Frankie plants these himself, in his garden, and it's really quite bizarre, that just ONE of these berries will render your tongue tricked for an hour or so. 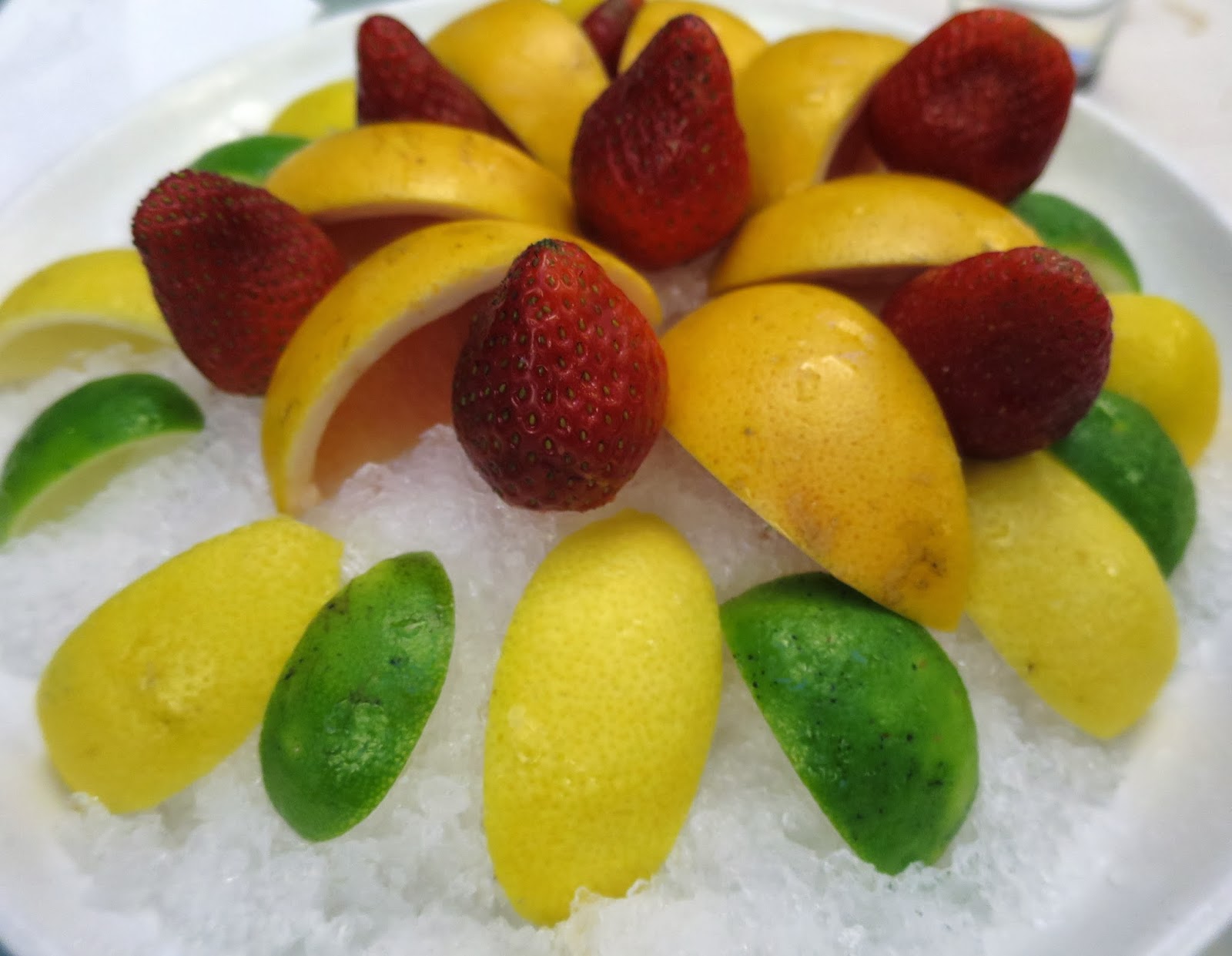 To accompany the magic berry, (You can read all about it's scientific name HERE in CCFoodtravel's well wikipediaed research post), the sourest of citrus, starting with green limes, yellow lemons, grapefruit and tart strawberries.  Incredibly they were sweet!!!!  Mind you, I love sour, so I wouldn't have flinched, but it was really a strange sensation, to bite into a slice of lime and not having to wince a little.

Not advisable to take these if you are drinking expensive plonk, for it definitely distorts your palate.  I must get a hold of a few of these berries, such a cool party trick.

Well, as that entire complex will be torn down in the near future, Gu Yue Tien's days are numbered in that location, so fans of Frankie Woo should hurry on while he keeps firing up his wok there.

Posted by fatboybakes at 1:56 PM

I can't imagine someone saying they didn't eat fish, because it was too horsey.. can you??!! :P

Ya la.. best fusion chinese ever!! I will never get sick of it.