Serendipity is when you get an invite to a restaurant such as Kampachi, scheduled just perfectly before another event across the road.  What are the odds of that happening.  Makan Fairy Godmother of late has been conjuring up these invites with her magic wand, so I gladly trotted along, to Kampachi at Pavilion, where I know the fish was probably still swimming in the oceans of Japan just earlier that morning, or the day before. 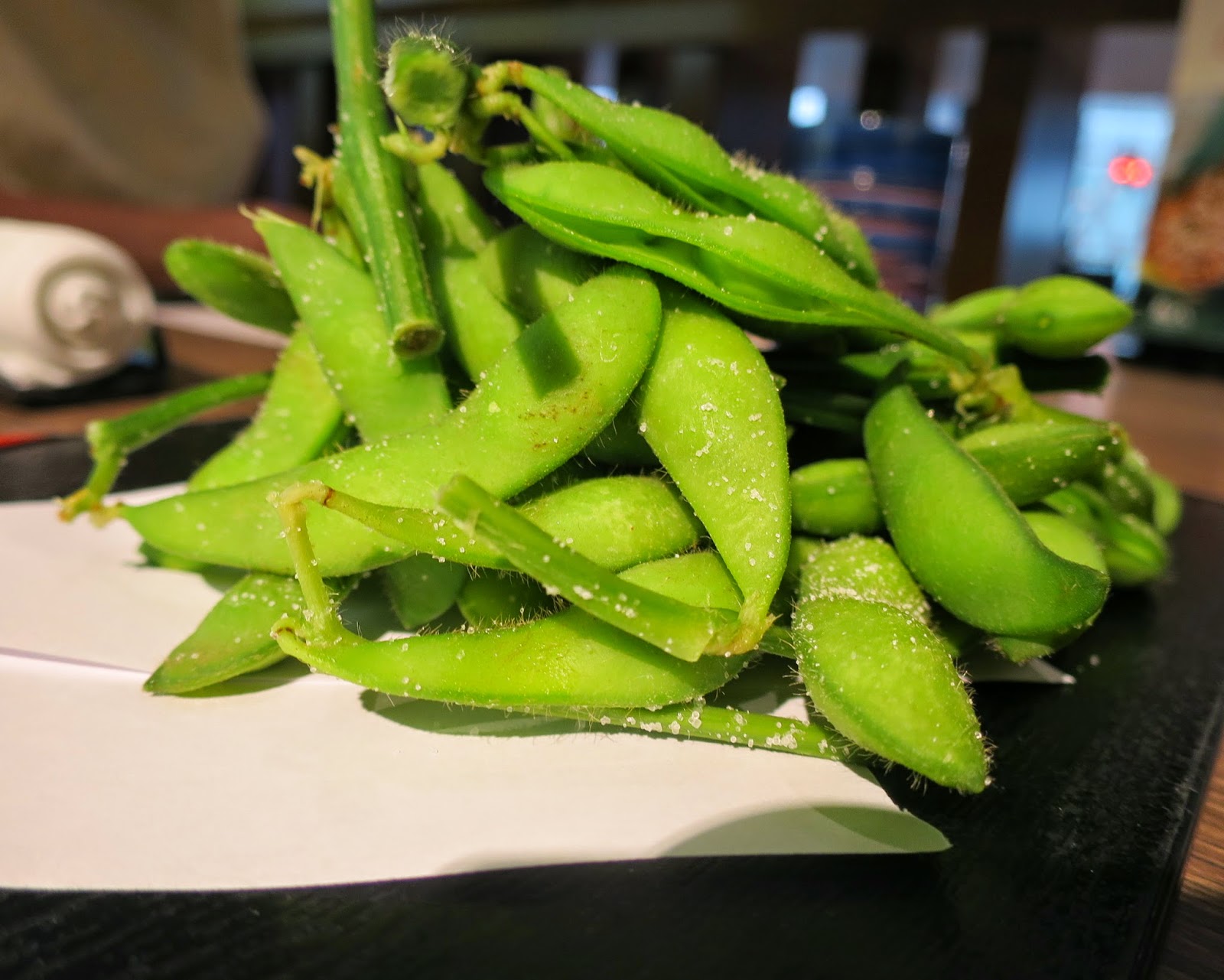 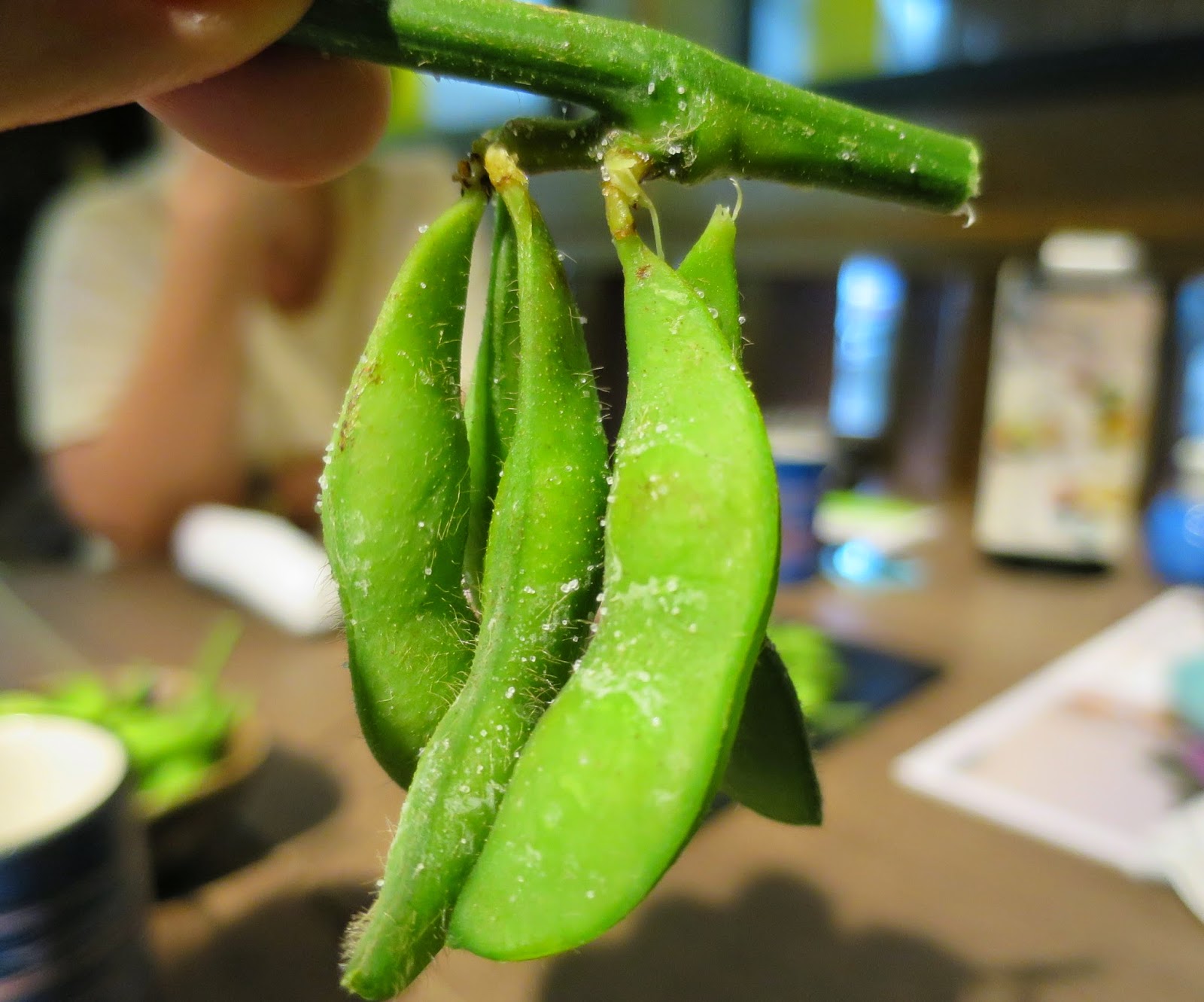 Apparently, I have not lived, because this is the first time I am seeing edamame beans off the stalk.  It isn't as uncommon as I hitherto thought, but nevertheless, what is life is one has done and seen everything.  So yeah, edamame on stalk was a first for me.  Such a simple yet satisfying snack.  Some of you might not know this, but edamame is basically soya bean. 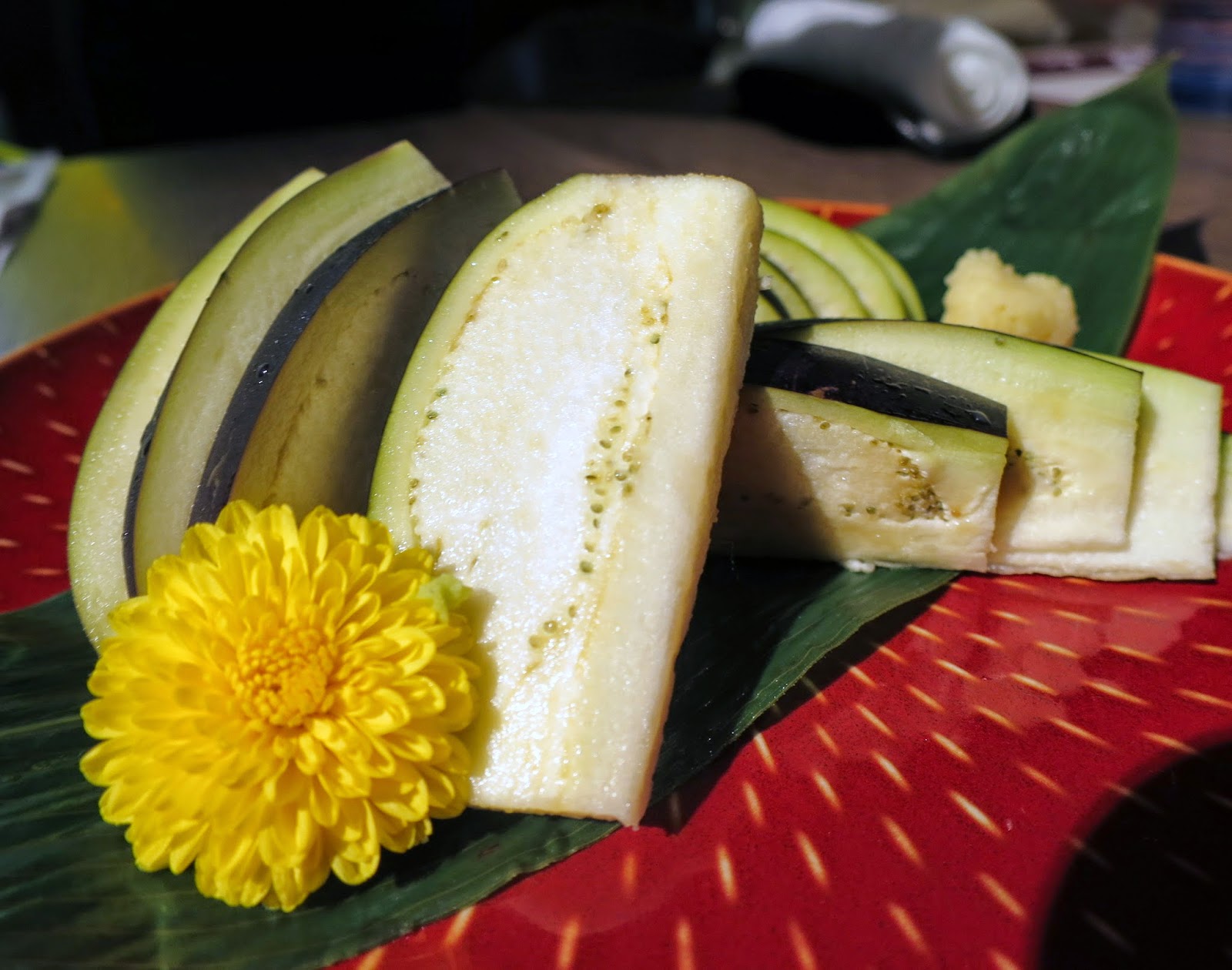 Another first for me, raw eggplant.  But no ordinary egg plant, these are Mizunasu, which is a Japanese water eggplant.  The thought of biting into raw eggplant...I had all kinds of preconceived ideas of sappiness and bitterness, but these delightful plump purple things were absolutely delectable.  Sweet and succulent, it tasted almost like a fruit.  It's seasonal. 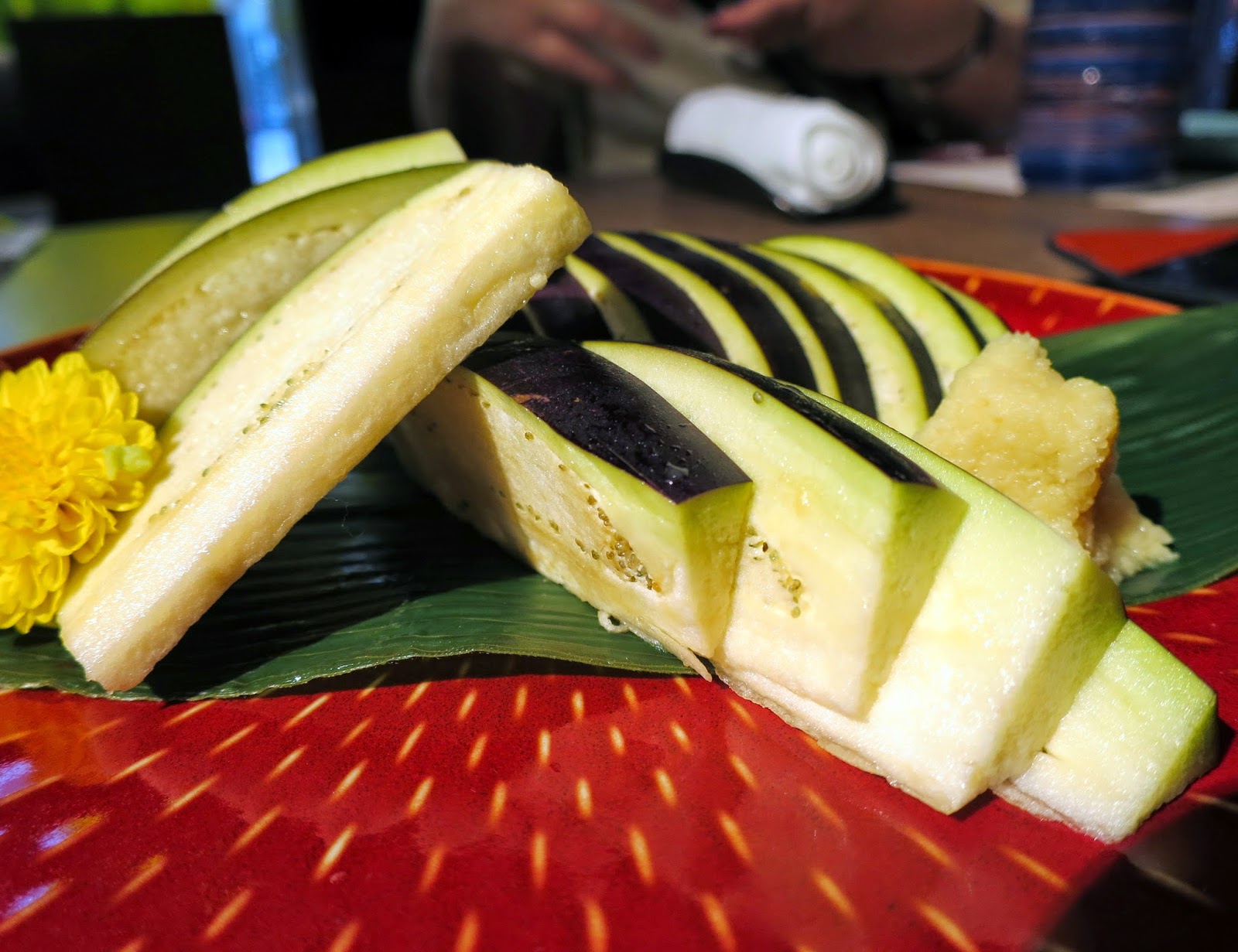 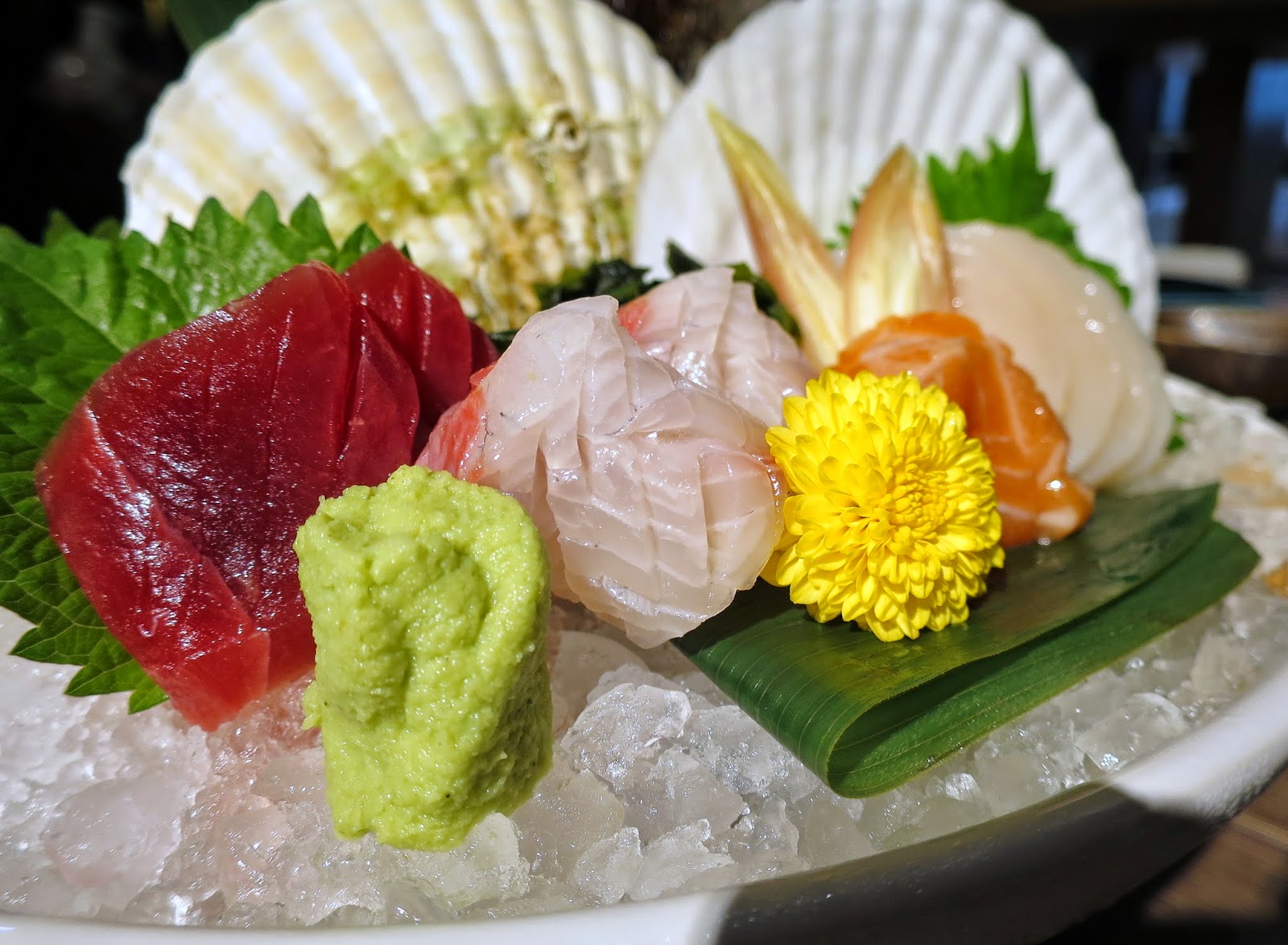 A gorgeous platter of sashimi, with hamachi, salmon, scallops, prawns, tuna, ....but the piece de resistance... 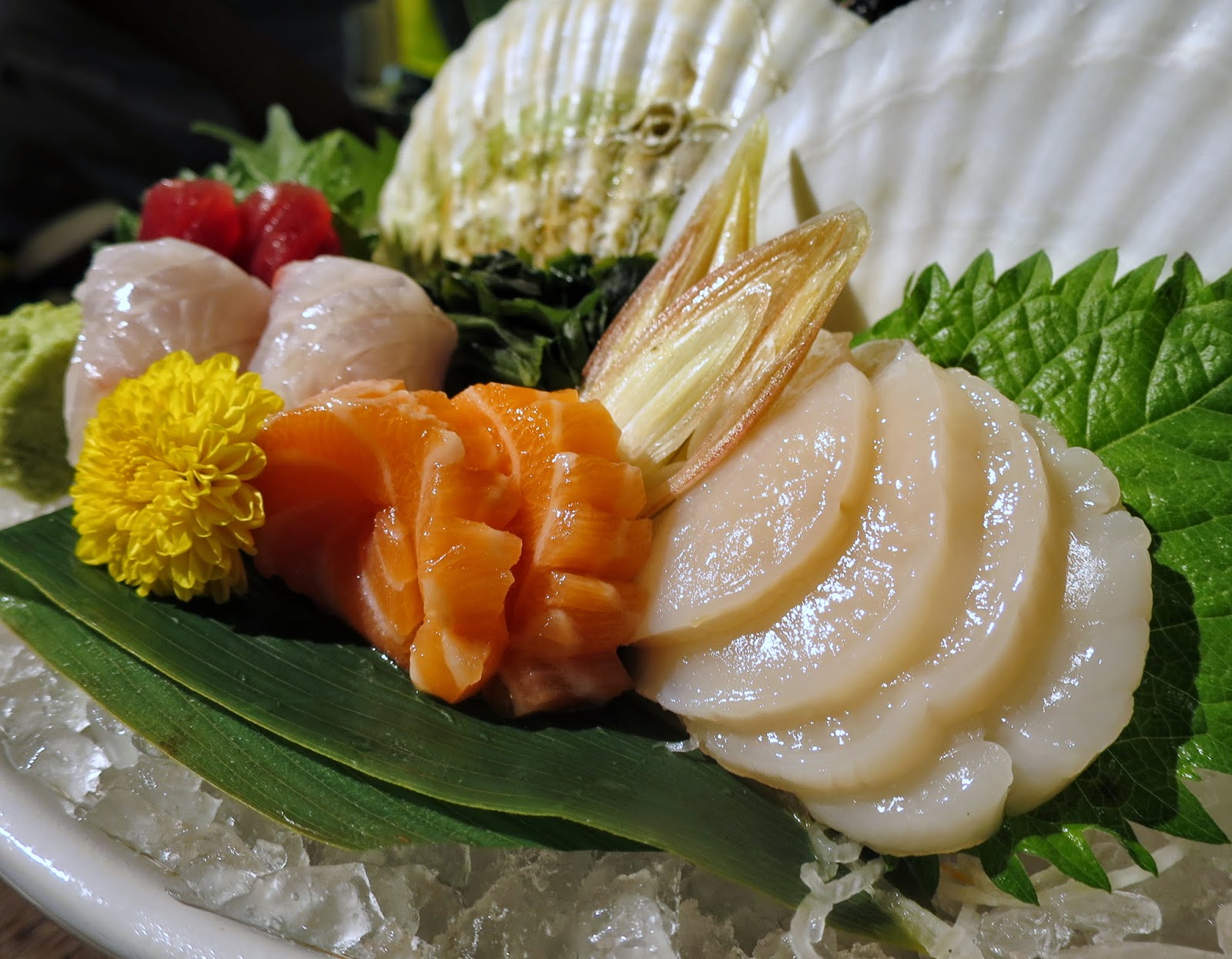 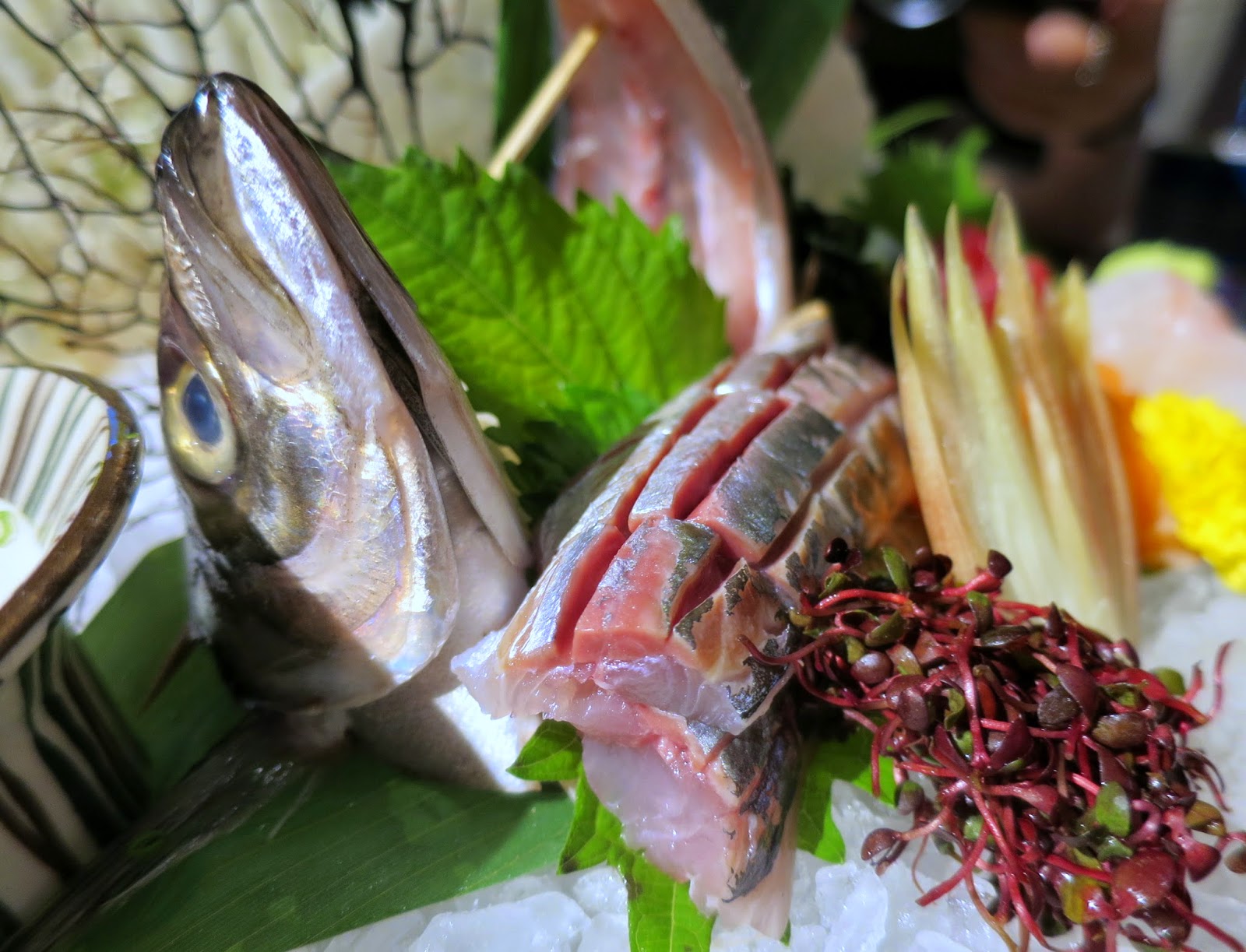 The Aji, or the Horse Mackerel.  This is not eaten like the others, slathered in wasabi, but eaten with grated ginger, and soy sauce.  I loved the firm texture of the fish, and the freshness, which really ..with a little bit of imagination, you could taste the briny sea water still flowing through the veins of the fish.  I daren't ask the price.  The remaining head and bones are not wasted, and are fried to a lovely crispy offering, which would go jolly well with sake. 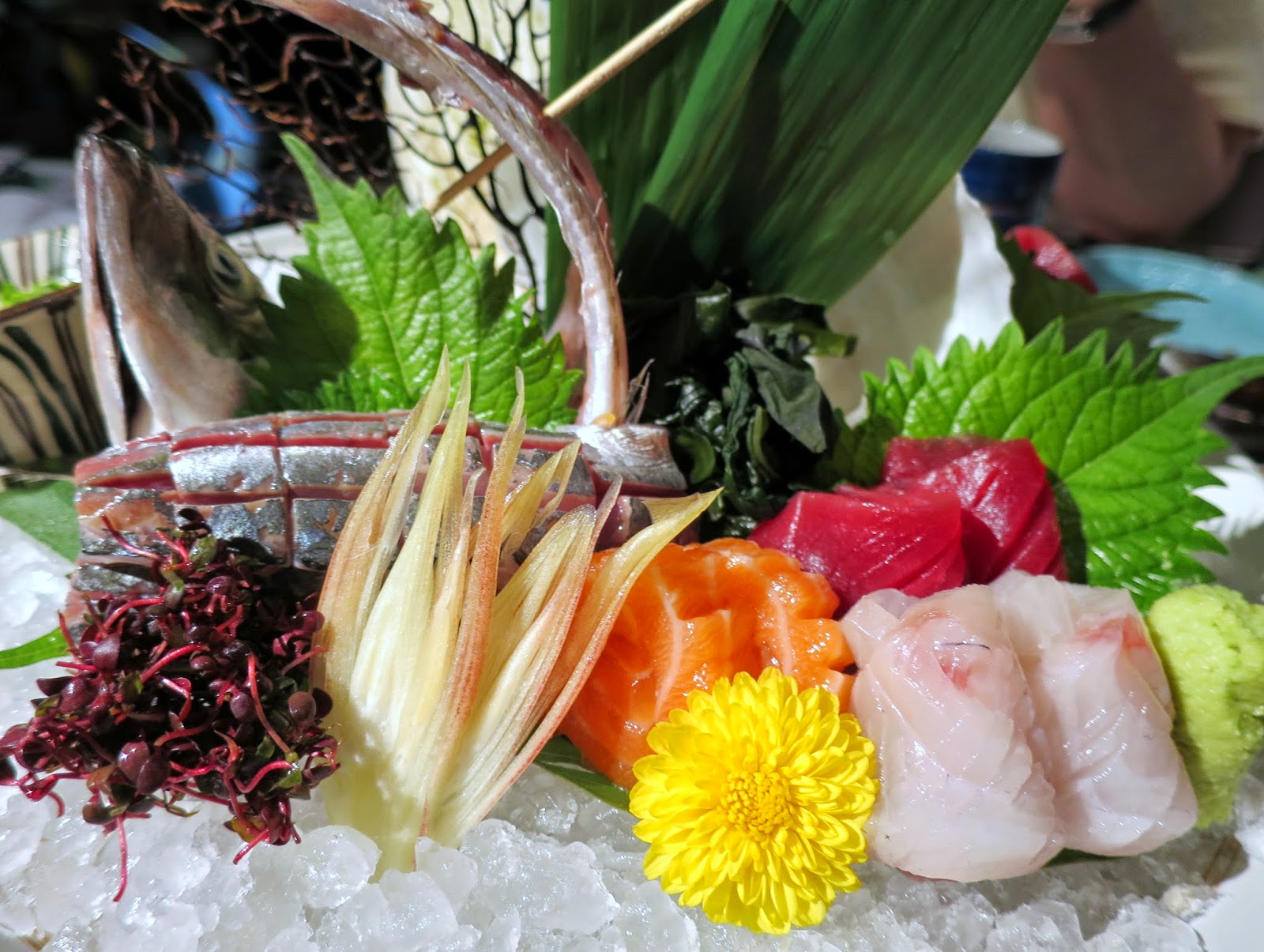 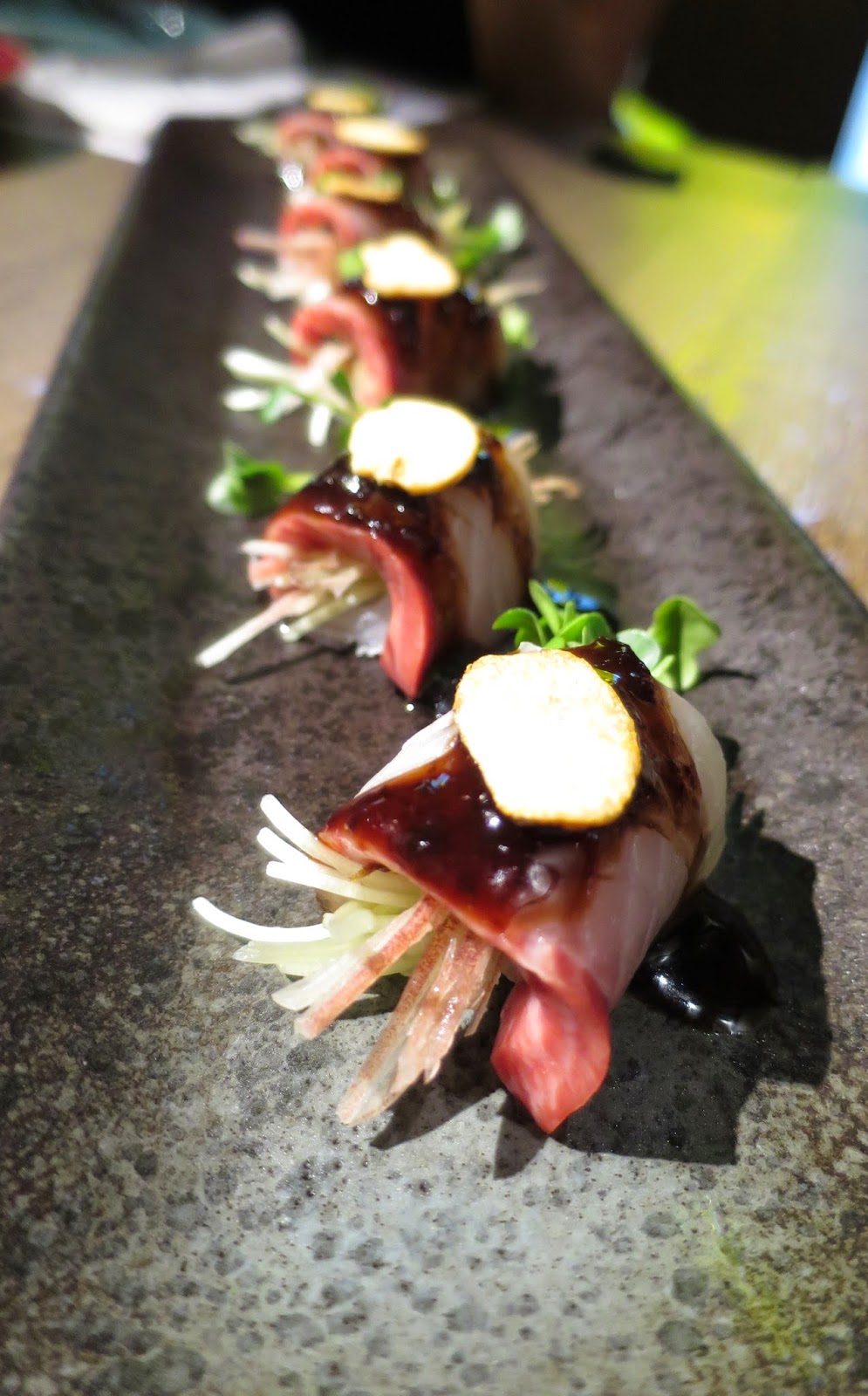 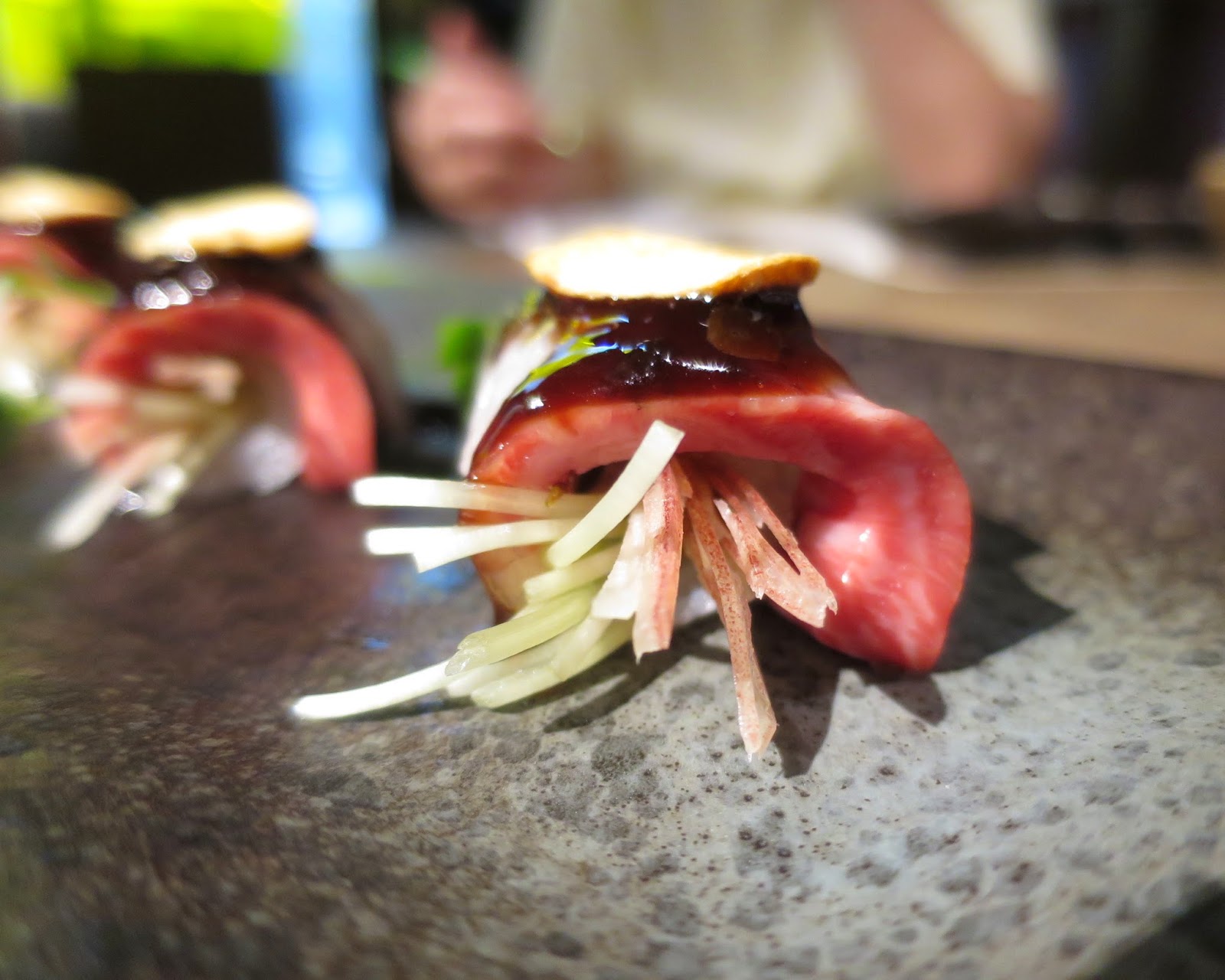 Kampachi Carpaccio, or as Ciki insisted on confusing us, Kampachi's Kampachi Carpaccio....Kampachi is yellowtail, in case you were wondering.  Not just the name of the restaurant.  Absolutely sublime, as this decadent fatty piece of sashimi glided down my throat, and I had to restrain myself from making audible groans of pleasure. 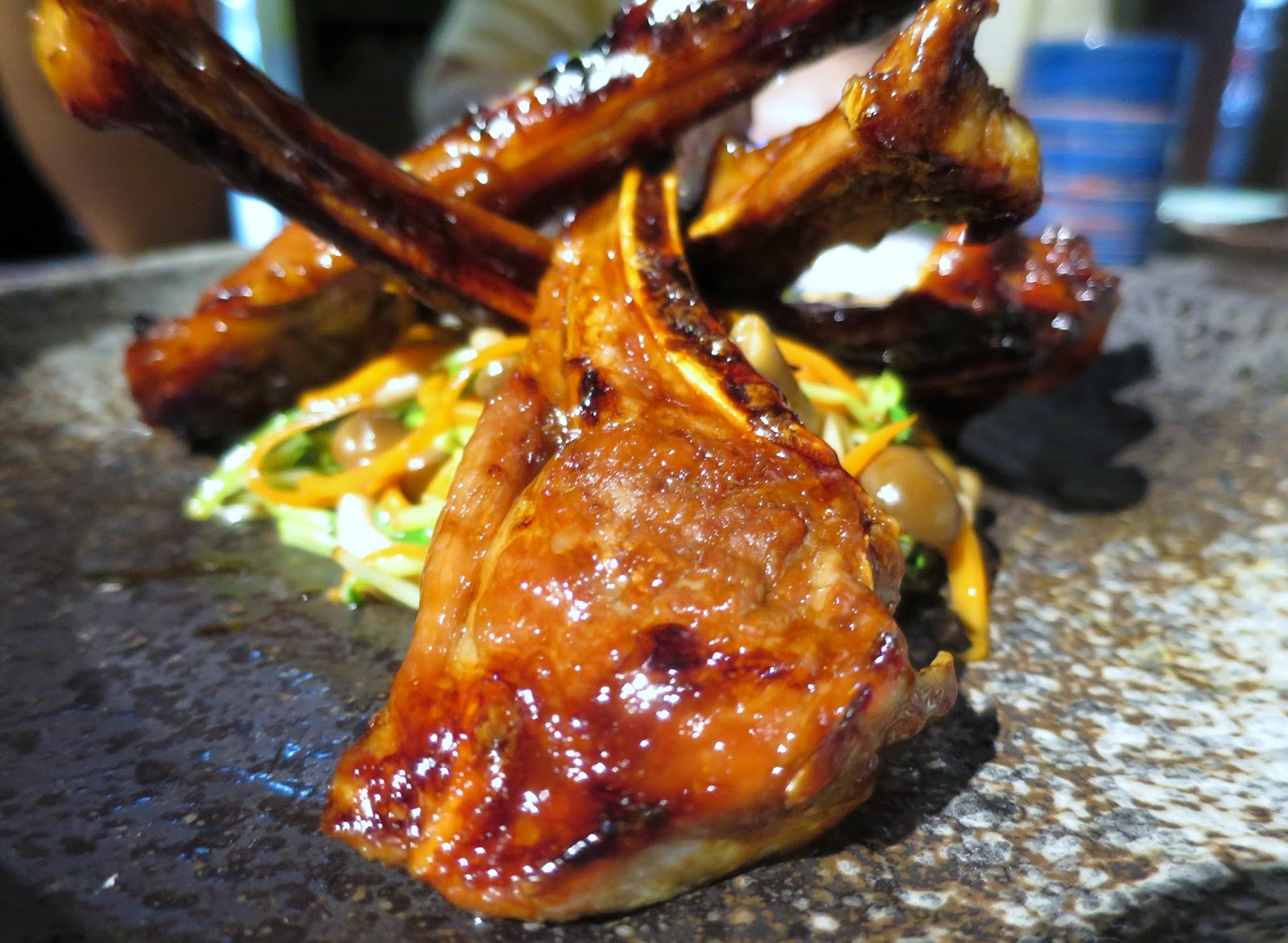 From surf to turf, as we indulged in the Lamb Saikyoyaki. Although I am not ovinely inclined, I had to say the marinade made the lamb totally unlamby, and utterly delicious.  It was a miso marinade, but seemed to be somewhat caramelized in the cooking, rendering it a nice sweet and salty combination. The crisp garlic chips and mustard also complemented the dish. 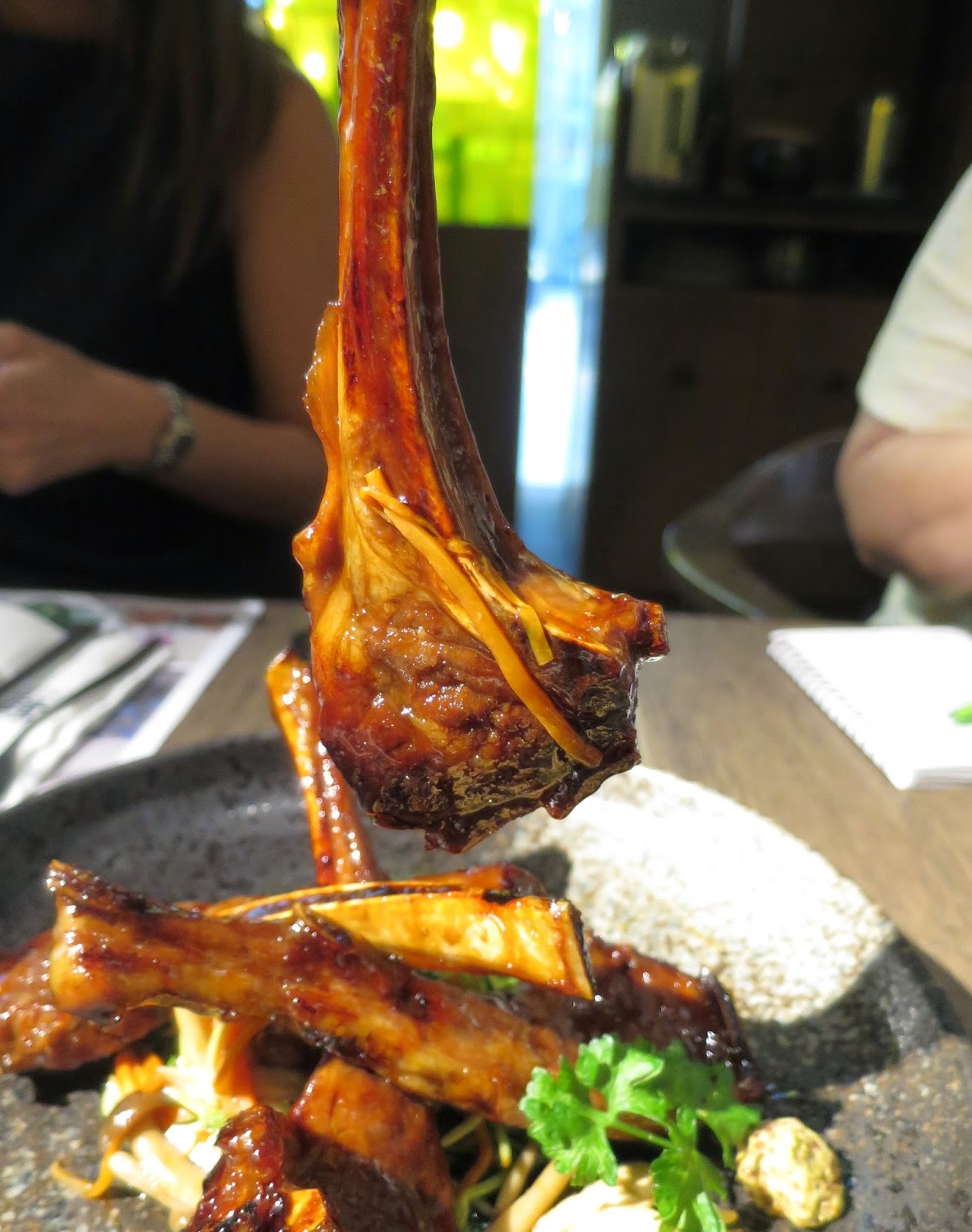 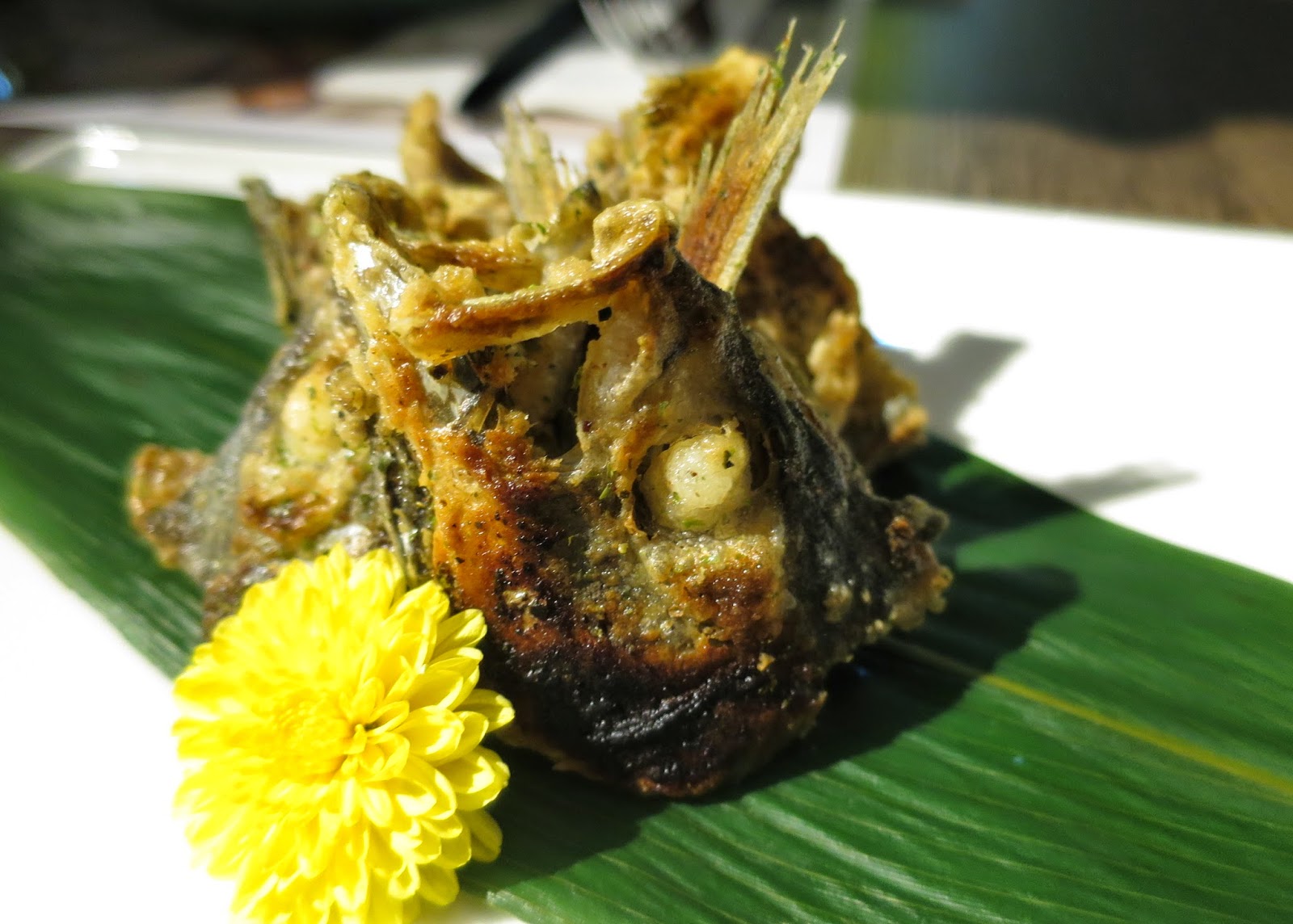 I see you, says the late Aji.  Nothing is wasted, the only thing missing was a beer or sake!!! 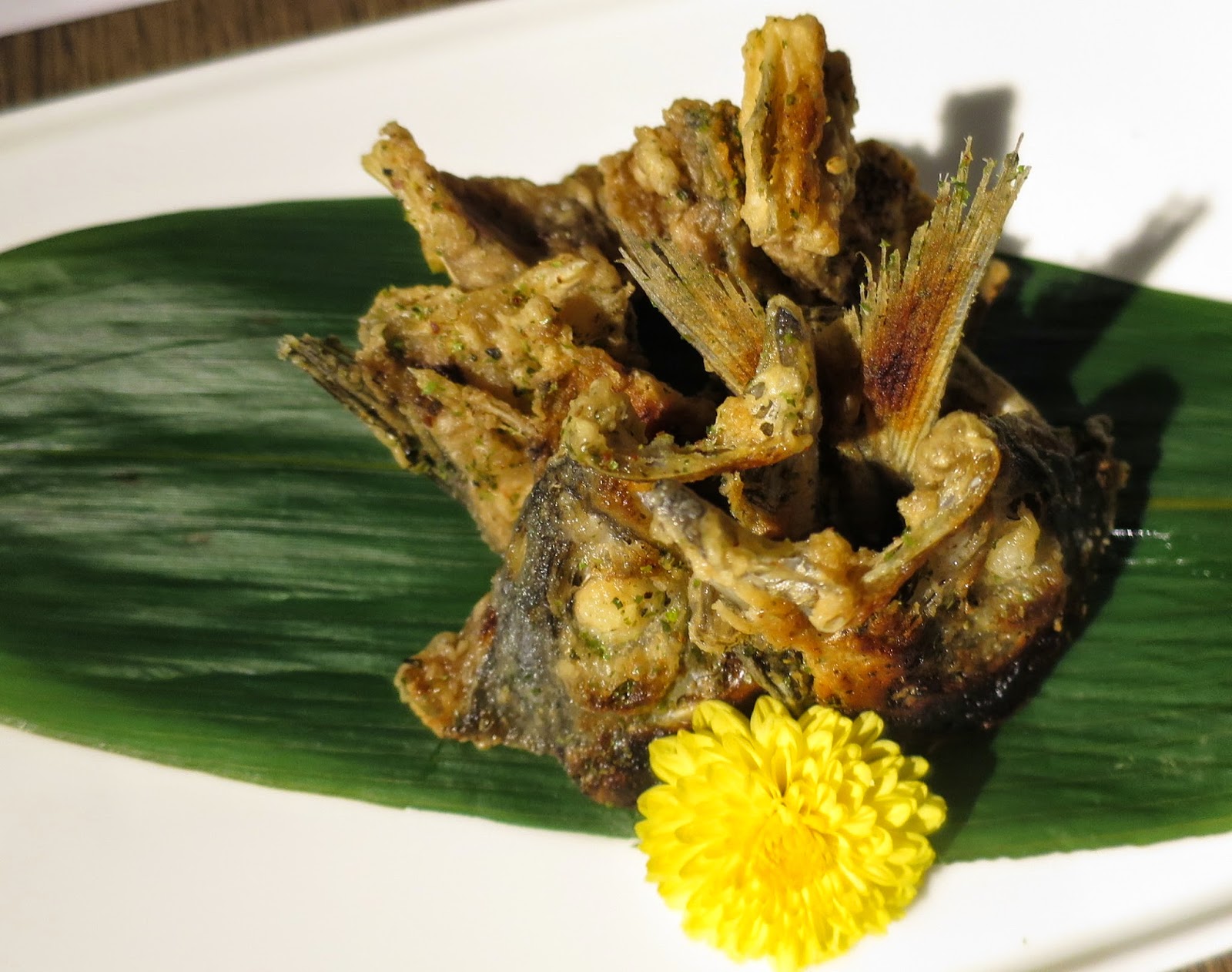 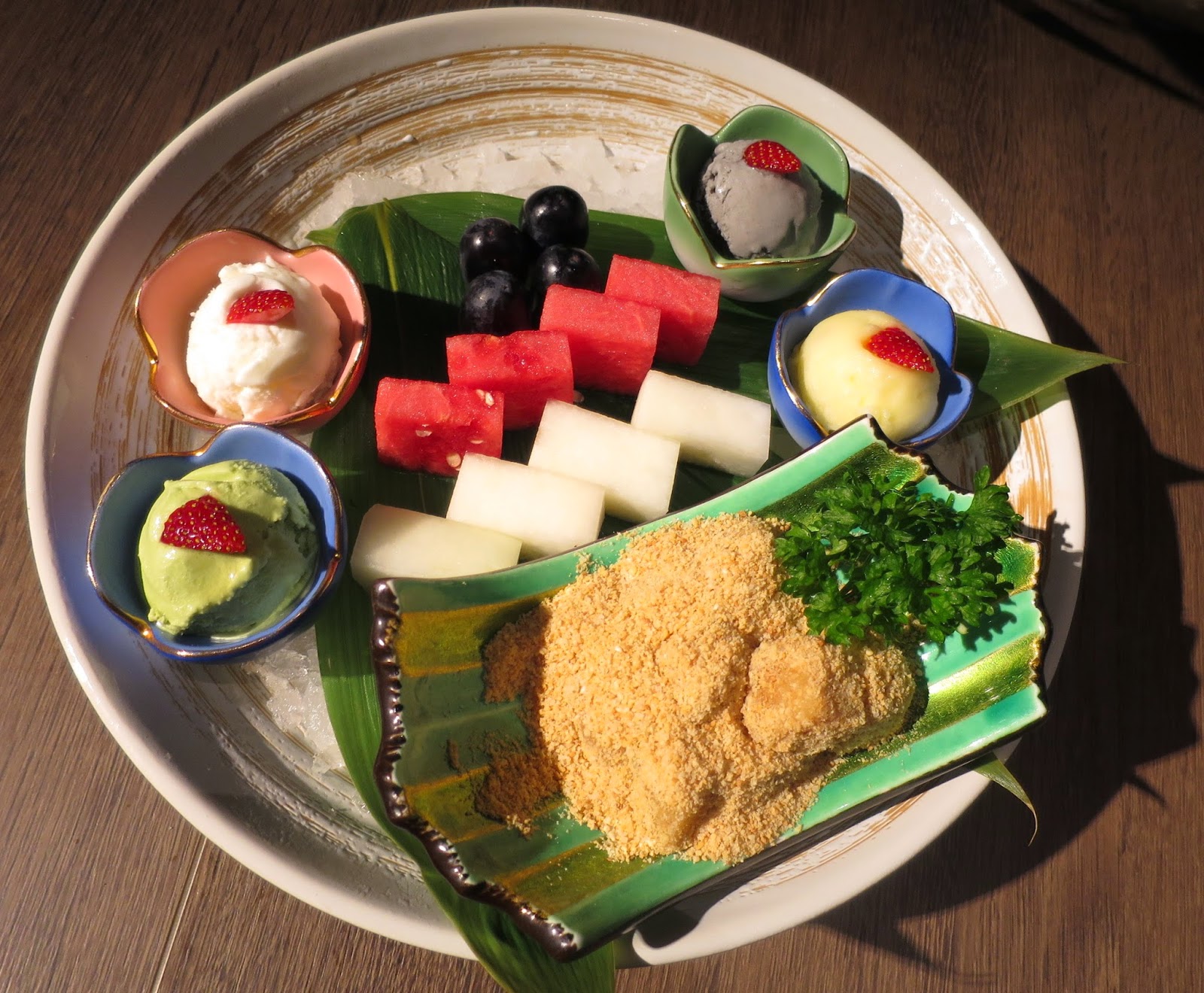 If burping were a  Japanese way of expressing satisfaction at a meal, then BURRRRPPPPPPP!!!!!