Of Eagles, Bald of Course, Hummingbirds and Mockingbirds

With so many lost souls gathered under one roof, there were tears and laughter, friendship, and for some, love. The roof was getting hotter, and smellier by the hour, as sweat odours from the runners began festering, creating a veritable sauna. I was amazed at the dedication and loyalty of some wives, who had been sitting there since 4am, to cheer on their respective other halves.

I am talking of course about the Standard Chartered Marathon, KL. How is that related to food? Well, because, I have never known so many people from one particular group, in this case, FOOD BLOGGERS, participating in a RUN. Let's see, there was Nipple Joe, Paprika, (and other half), Lecouple Toy, and me, of course, doing the 10km. In the 21km, Cumi AND Ciki, (who at the end of the run, looked like she could still pose for Tatler), the Deaf One (honorary food blogger by virtue of association), Yin Yin, ... and in the FULL MARATHON, drum rollll, BALD EAGLE. (and Wai Hoong, but he had just finished his 48 hr cyclathon Book of Records feat, so what's a 42 km run right?). So yeah, so many lost souls were gathered under one roof.

However, the purpose of this post really, is to pay homage to BALD EAGLE, that dear fellow, who, a day before turning THIRTY NINE, managed to complete the 42km, albeit hobbling the last 12km. Rumour has it that his wife, AWHIFFOFLEMONGRASS, was there at the finishing line, shouting RUN, BE, RUNNNNNN.....while the poor guy, cramped and can barely walk, croaks, "I CANNNNN'T RUNNNNN, DUHHHH"....ah well, its the spirit that counts. 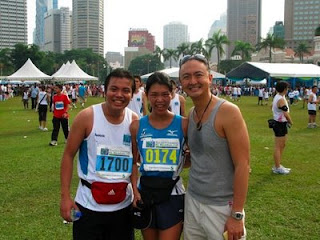 Pics shamelessly stolen from Nigel Skelchy's facebook....thanks Nigel
(sorry Yin Yin, forgot to put your pic in the kohlaj...now you get a whole pic to yourself)

And to usher in his 39, his good wife, who failed to see he was cramping and still did the "DO NOT DO" prescribed in the runner's handbook, hosted a lovely surprise at Max's New Kitchen..... 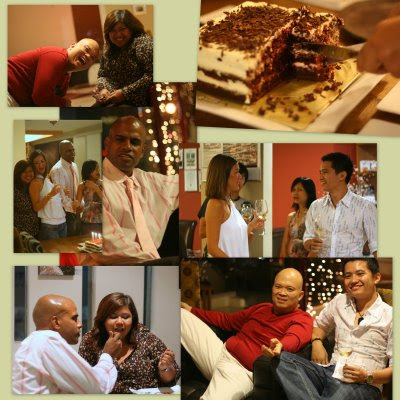 Anyway, this post is to wish Bald Eagle a very happy albeit belated birthday, and may the marathon fall a week after your NEXT birthday so you qualify for the men's veteran's category.

While we're on the topic of Birds, Big, Bald or small, I found myself, as I was chatting with Thamby, with some ripe bananas on my hand. What to do with my ripe bananas? Hummingbird cake sprang to mind. But as I checked the tin cupboard, dratted thing had no canned pineapple. What household doesn't have canned pineapple? Chis!!! Yet, the bananas were screaming out at me, mocking me, to make them into a cake. So, since I had HALF the ingredients for a hummingbird cake, I present, THE MOCKINGBIRD cake.

It smelt divine, and I scalded my tongue, tucking into a freshly baked piece. If you talk to me now, you'll only hear "mmmfff uh uh uh pbbbttth".

PS - Oh, thamby and I have started this game. We dictate the first line for the next post. That lost souls crock was from her....
So, I am now tagging Ciki of Cumi & Ciki:
First line for your next post:

The humidity caused the wild monkeys in the Taman Tun Park to be restless, almost as if they were on heat.

Posted by fatboybakes at 9:45 AM

hilarious!!! yes indeed it was a mini food bloggers run wasnt? too bad i got lost among the crowd n couldnt run with u guys..

bravo FBB!! Bravo!!! I hardly run these days... waistline is expanding too!

from 200 to 450? tht's a lot more bananas! No wonder the cake looks absolutely dense and yummy!

fbb, so, if i use pineapple, do i have to use more flour ar? cos pineapple is a wet ingredient mah. i'll try to get some nuts from phoon huat oso la.

your cake and the photo looks really good la. the colour is smashing! :D

I am really awed by the no. of food bloggers who did the marathon! And here I was, thinking that being a food blogger means full exemption from exercise. How wrong I was, how wrong.. aiks!

well done to all of you who ran the marathon!

Oooooh! Got entire pix for me :) You're the bestest, FBB! *runs another marathon to hug FBB*

Congratulations to all runners-cum-food bloggers ;) Only a year ago at the Orange Run 2008 I met a single friend...now there are so many running kakis :)

And a big, big salute to BE for attempting the Full marathon, and for completing it under 6 hours...I wonder when I'll ever be able to conquer the 42km. Happy Birthday Awesome Marathoner!

FBB, you had pretty good timing there. My Mizuno Wave Run, I only managed to do 1hr 22 mins...still slower than you!

550ml jar of faith -- I always tell people I live to eat and I run to eat ;) Come join us lah, it's really fun, as you can see. Drag that Pontianak Lee along too :P

While we're on the topic of Birds, Big, Bald or small, I found myself, as I was chatting with Thamby, with some ripe bananas on my hand.

But despite that all, I'd still kill for your mockingbird cake. I have no morals.

Chuish looks so cute in the photo!! And you got position 1270? Very impressive! =D

Oooh...is that a banana-esque cake? Monkey wants a piece please.

Congrats, FBB on your run results - impressed! And kudos to all the running floggers who participated - maybe should have a Bloggers Marathon soon eh!
Hmmm... why must use hawaiian coconut ahh for the cake? Use malaysian coconut can or not?? After all, your bananas were malaysian what!

pure glutton, chuckling at my msian bananas. erm, i dunno if they're literally from hawaii, the package i bought from bake with yen says hawaiian coconut. maybe its like hawaiian solo papaya, a name, more than where its from.

qwazymonkey, i aint usually a big fan of my own cakes, but this is so hearty, i whacked 1/4 myself.

thamby, what you harping abt, mockingbird cake?

yin, you're most welcome. ah, so now i know who's keef.

babe_kl, bake with yen la. dunno if its really from hawaii. prob can buy your own coconut and grate. but the santan type grating is too fine oridi. has to be coarser than that.

j2kfm, you still young la, can do one.

hairy, i pass u the hummingbird recipe. but no, i think u use less banana. flour amount almost the same, and the recipe i have for hummingbird all use oil one, not butter.

TNG, what to do? the bananas were just nice for cake. actually prob overdid it with the bananas,...would've preferred a slightly drier texture.

thule, if i didnt run, i think i cant call myself fbb oridi, have to be VFBB...

yeah, nipples, u managed to stay ahead though! well done.

wow! it takes courage to run a marathon...good job :)

Woohooo! Congrats on your time! I love that collage, everyone looks so happy, fresh and wholesome like some ad for organic food and holistic living hor? Mockingbird cake! hahahahaha

hahahahaha food bloggers need to run because they eat too much! i run a lot too, to burn all the calories :D

Hawaiian coconut same as dessicated coconut?? :p sigh i was in bake with yen on sat but they were closing d chased me out :(

You were the one who originally introduced us to the hummingbird cake. We posted it last week. Your mockingbird version is deliciously punny.

chrystal, whats your blog site? i cant access it via your identity! i was the one who introduced hummingbird to you? are you sure??? ;)

babekl, no la, dessicated is very fine, like to make santan. this one is grated coarser. actually, u can prob buy those old coconuts and grate yourself. use the magimix.

ladyironchef, ooh, u should join us for the next run!

paps, what was your time ah?

alexandra, of course, i only ran 10km. i presume your kudos are for the heroes in our midst, who did the 42 and 21km.