The seasons sure do fly, and although we theoretically only have one season in my country, ie, summer, we do have the entire year dotted with festivals that make this country the united colors of benetton as it were. In my country, in January & February, its usually Chinese New Year-ish, then we have the Hindu celebration of Thaipusam, where devotees fast and pierce themselves with hooks and such, and carry the portable deities called Kavadis. In the March - April months, we have a mixture of Qing Ming, Lent, Easter, etc... more minor, those, and dont warrant a public holiday. At some point, the Chinese have their dumpling festival, and then we have the mooncake festival, Deepavali, and Christmas.

Now, orbiting the calendar as years go by, are the Muslim holidays, because they follow the lunar calendar, which seems to be one month less per annum than the Roman counterpart, so, every year, the Eid, Ramadan, the Haj, all become almost a month earlier than the previous years. Muslims living in countries with real seasons, will find that if Ramadan is in winter, the fasting time from dawn to dusk is shorter, and conversely, in summer, longer. I am not sure what happens if they live in the land of the midnight sun during Ramadan. Perhaps someone can elucidate.

Like ALL festivities, there will be the pious, and the commercial. Or a happy combination of both. One such phenomenon is the Buka Puasa (breaking of fast) buffets that seem to have evolved and mushroomed since the early 90s. It is generally a happy time, where Muslims get together with their non Muslim friends to partake in the breaking of fast. They would also do their Maghrib prayers, and all hotels in my country do provide facilities. Or they would not get their building permits.

Anyway, even before the start of the actual month of Ramadan, which incidentally, is today, and let me take this opportunity to wish my Muslim friends Selamat Berpuasa, hotels are aflurry with preparations for this annual event that goes on for a month. We were invited to Essence, Sheraton Imperial, by Cindy Yoong, the PR Manager, to sample their fare.

They usually showcase a wide variety of local favourites. The chef here is tossing the dough to make roti canai.

Roti canai and murtabak. Though personally, I try not to load with carbo at buffets. Head straight to the oysters and sashimi, I always say. But I guess after a long day's fast, carbo might be good.

Being very diverse, they even have hainanese chicken rice, with a choice of roast chicken, roast duck even, and steamed chicken.

Dates, a must have while breaking fast, for they are the favourite of The Prophet, and good Muslims seek to emulate him. However, diabetics should exercise caution, as dates ARE very sweet.

A roast lamb on the spit. Accompanied by lovely chargrilled vegetables. The lamb was tender and aromatic.

A lovely spread of Briyani Gam. I couldn't resist trying this. Anyway, I hear Basmati rice is good for you, or is the least harmful of all the rices, because it contains the least starch.

Slabs of fresh salmon and tuna, for sashimi, and sushi.... I love the California Roll and transform it into my own salmon roll by unfolding it, chucking in chunks of raw salmon, and re-rolling them.

A dizzying array of Malay delicacies. I like! Ulams with myriad accompaniments, from cincaluk to sambal belacan. Alas, I did not see any tempoyak. Lemang with serunding, satay ( the satay at Essence is very good, by the way)....

Rendang Tok! A rarity in this day and age. Big gamey chunks of beef stewed in a lovely rendang sauce till dry. A special Perak-ian salad, comprising Pucuk Paku and Pucuk Ubi, with a unique dressing of catfish and coconut imparting an almost cincalok-y kind of texture.

Desserts are actually at a different location, hidden away in the Red Room. A dazzling display of East Meets West, from onde onde to Tiramisu. Thamby spat our her onde onde, while laughing at something funny, being more accustomed to a different type of ball in her mouth.

Actually, for me, at hotel buffets, my favourite dessert by the time I'm done with the mains, are really fruit and ice cream. Give me that and I'm a happy camper. Oh, and ice kacang, even better!

Thanks Cindy for the invite. 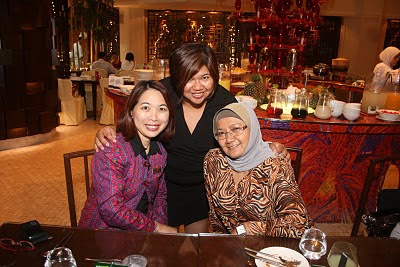 "In my country"? Errr....don't we all know you're from Pakistan already?

I like your 1Malaysia photo. Cindy looks every bit the Indian that she is.

I spat out my onde onde? Sure....only if there was a HUGE mirror separating us and you looked at your reflection and thought it was me. (Ewww)


ahpa, how much do u weight now?

Why did LL spit out her onde-onde? *curious*

I'm going over to KL for a holiday.
What's the best way to book good hotel (4-5 star) in KL for the best price? Thanks.

I'm reading between the lines ..and it's telling me the food is "ok" but there is a good variety.

vialentino, actually its not bad for a ramadhan buffet. lots of local delicacies which are sometimes hard to find.

TNG, like all buffets, there are probably one or two items that I'd zoom in on, and the rest are well, buffet. but one man's meat is another man's poison. i can never fathom ppl who go to buffets and fill themselves on fried rice.

myfoodsafari, your best bet is to get a malaysian to book for you.

LFB, i was gonna suggest a missing meat, but then realised it would be insensitive. so, yeah, sushi and briyani, the way forward.

J, i told you, thamby is only used to having a certain kind of ball in her mouth.

ciki dear, i weigh too much... but that's coz my hearts made of gold.

nipples, even better right, a mixed indian...how better to show the spirit of 1 malaysia...

thamby, okay la, i spat out my ondeh ondeh but only coz i was laughing at something, i forget what now...