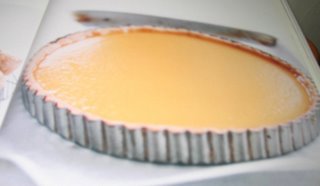 This is what the finished product should look like, according to Donna Hay's Classics II 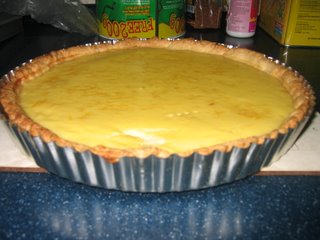 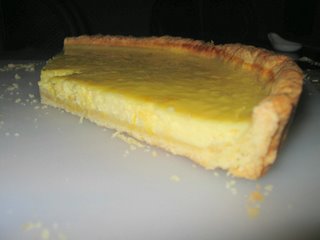 And this is what MY finished product looked like.

Anyway, the reason for the difference in the appearance, I reckon, is quite easy to explain.
1. I do not have a flan tin with vertical walls. The walls to my tin are a bit angled.
2. I did not follow her instruction to strain the lemon mixture, because I added lemon zest to mine, making it even more lemony.
3. The dent you see in the filling is probably from some kid who poked his finger in.

Was actually going to make a lemon delicious pudding for usual family dinner, but my mother mumbled something about a lemon tart would be nice. Anyway, I've noticed the tarte citron in Mr Ho costs a small fortune. I haven't tried the one there, but hey, a lemon tart is a lemon tart, probably differing only in sourness. Most commercial lemon thingies I find aren't tangy or sour enough. Probably the general SOURNESS TOLERANCE INDEX (STI) of the public is quite low.

1. 2 cups sifted flour. (actually, its going into food processor, so not sure if sifting is necessary)
2. 125gms cold cold butter, cubed.
3. about 3 tablespoons ice water.

Blitz the flour and butter in a food processor until fluffy like breadcrumbs. Use the pulse mode. Then little by little, add the ice water until it forms a cohesive dough. Watch for that split second when it transforms from crumbly texture to a doughy texture.

Refrigerate for 30 minutes, not longer. Roll out and put into a 9" diameter flan/pie tin, and bake at 180C with a layer of baking beads, rice or beans. This is called blind baking, for you novices out there.

Erm, of course, you need to put a layer of baking paper beneath the beans/rice. Oh, oh, dont forget to poke some holes into the base of the pastry, or the thing will rise like a hot air balloon.

After about 10 mins, remove the beans/rice.... I THINK the purpose of this whole exercise is to make life harder in general, and also to prevent the pastry from deforming too much. Either shrinking, or puffing up.

Meanwhile (after u put the pastry in oven), make the filling:

Actually, I reckon for a 9" diameter tin, the above quantities are a bit short. So, my suggestion, 4 eggs, and 1 cup cream

Anyway, using a double boiler set up, ie, bowl over pot of boiling water, dissolve the sugar into the lemon juice. When dissolved, add in the cream and eggs, and continuously stir for about 5 minutes.

At this point, you are supposed to strain the filling mixture. I guess you can, and then add the lemon zest in later.

When the tart base has been cooked, (about 20 minutes), lower oven to 140C. Take out tart base from oven, unless you are heat proof. Pour the strained filling mixture in, (don't forget to add in the zest at some stage), and bake for another 20 minutes on the lower heat.

So to summarise, sequence is.

And remember this sequence for other tarts.
Posted by fatboybakes at 12:12 PM 20 comments: 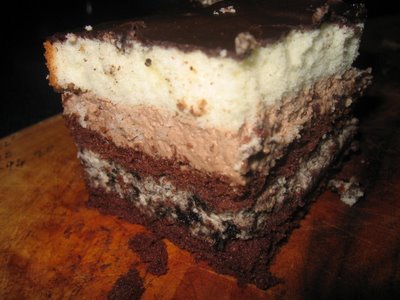 I really should work on my presentation, and make sure the knife is free of crumbs when cutting through a layered cake. Anyway, this particular cake was inspired by RPM Instructor, Alexander Lee, who displayed a pic of a sponge sandwich with oreo cream in the centre, but refused to divulge where he had eaten it.

So, I decided to improvise.

1 portion chocolate sponge
1 portion vanilla sponge (actually, 1 choc sponge cake would be sufficient, if you can't be bothered to have muhibbah colored layerings)

2. Bake in square or round tin.

3. While sponge is baking, whip the cream, and crush the oreos (1 packed means one tube). Depending whether you like your oreos chunky, or finely crushed.... crush accordingly.

4. Use 2/3rds of whipped cream and add in oreo mixture.

5. Melt the chocolate (with a dash of unbeaten cream) and use a portion of it to mix a chocolate cream with remaining whipped cream.

6. When the sponge cake is ready, and cooled, cut into three layers, and intersperse first layer with oreo cream, second layer with chocolate cream, and top it off with a chocolate ganache.

7. Refrigerate, and serve cold.
Posted by fatboybakes at 1:39 PM 13 comments: