Whenever friends open an F&B outlet, hope springs eternal that yay, a new hangout place, to drink especially.  Well, if you're teetotaller, young and happening, then this new place in Bangsar is the place for you.  Or, if you have deep pockets and have kids and would like to indulge them with designer milk shakes.....

Credit has to be given to the founders and owners of Patissez, who originally hail from Canberra (to the uninformed, that is the capital of Australia),  and who came up with the unique and novel concept of the FREAK SHAKE... 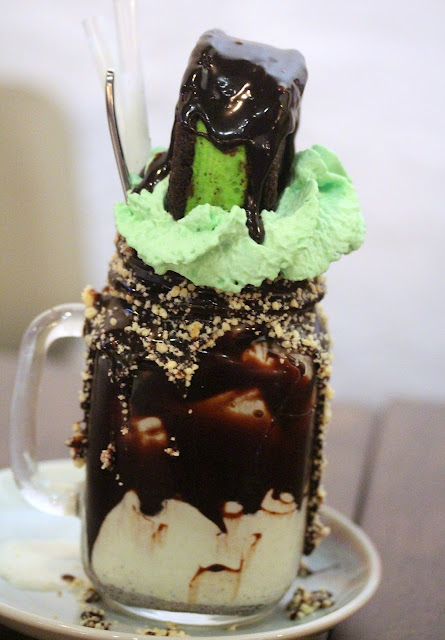 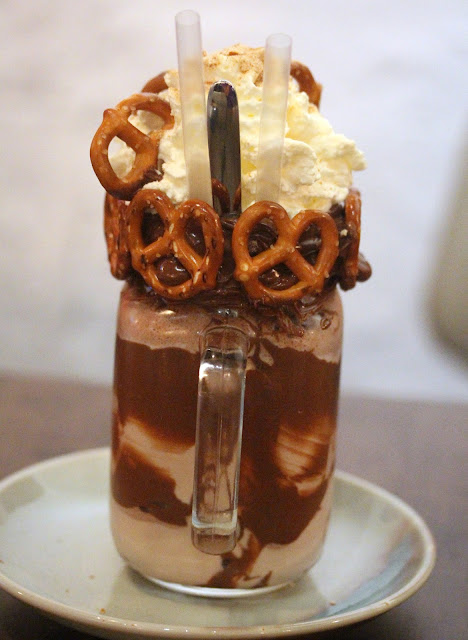 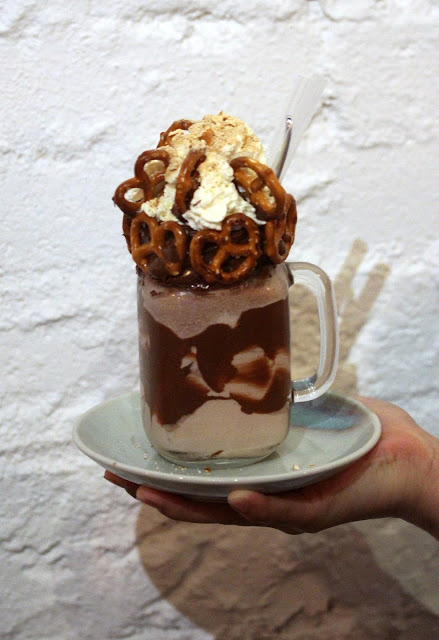 Even I who am not a fan of milk shakes have to admit that these shakes do look rather inviting, sort of like a cardiac arrest in a glass, (who doesn't love that), portable dessert.  Priced at RM23 each, I'm guessing my four kids will be sharing one when we do go there.  Now, surprisingly, despite its gregarious appearance, the shakes itself are not overly sweet, and the combinations of say, nutella and pretzel, do lend a novel dimension, which is so lacking in most pedestrian cafes these days.  If you like Mint, which I do, the Mint Condition is packed with that minty goodness.  Judging by the throngs of people, it's obviously a hit, as KL craves something new in concept and taste.

Other shake flavours include the Red Velvet and Muddy Pat but they're all priced at RM23. 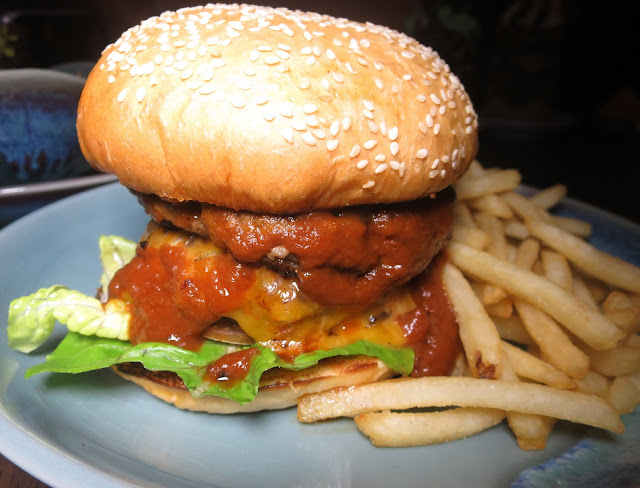 The Freak Burger, RM38, a generous double beef patty, some chicken bacon, Patissez chicken jam and fries on the side.  What's not to love... a moist juicy piece of meat between two well endowed buns... 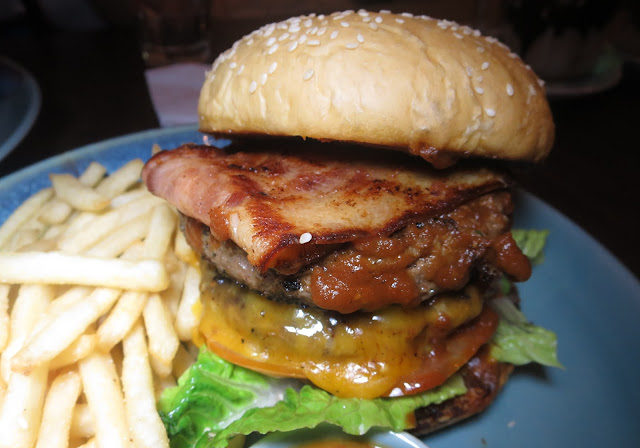 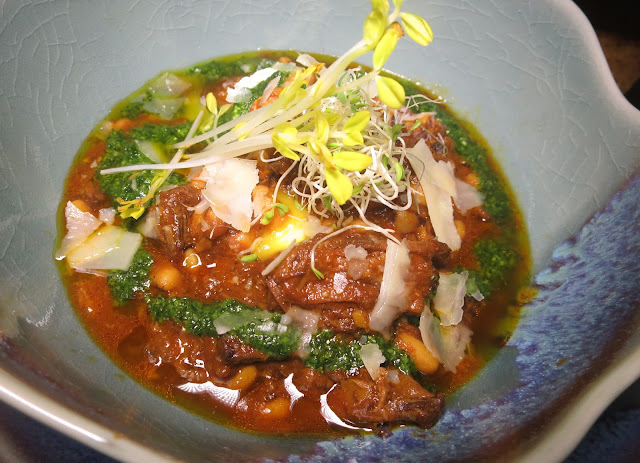 Slow cooked Cheeky Beef, much like a stew, which come to think of it, very few places do, and do well.  Served with a side of sour dough bread and pesto sauce...Perfect community dining this dish, almost passover like, each one dipping their bread into the lavish gravy.  RM35 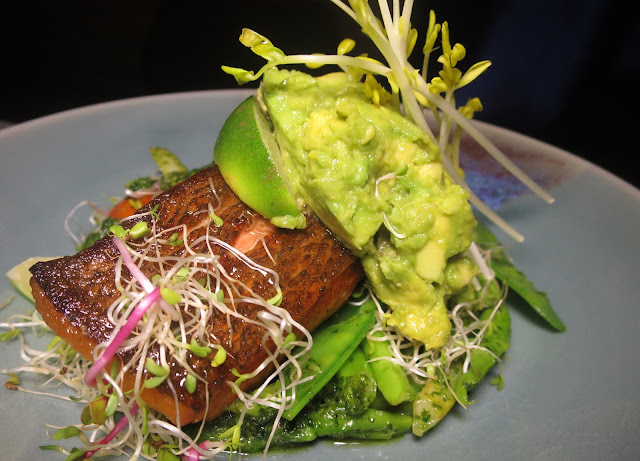 Spring salmon, RM45, what struck me most about this dish is the abundance of avocado, which we all know is a small king's ransom in this country, so that alone makes this dish worthwhile I reckon.  I loved the generous sides, (not particularly being a fan of cooked salmon), and the fish was also seared well, without death being warmed up twice over. 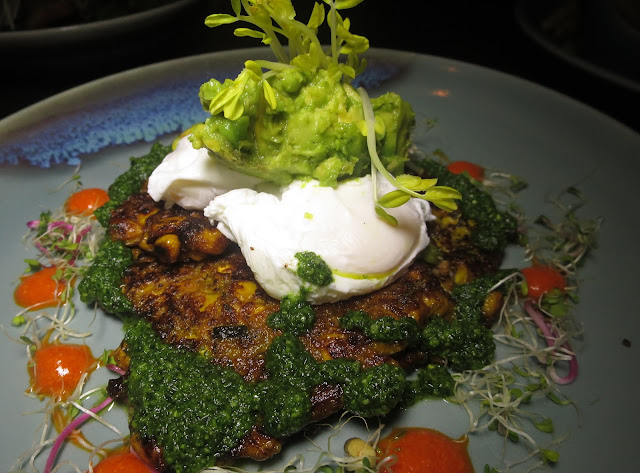 Possibly my favourite dish of the night, Corn and Zucchini Fritters, it contains all my favourite stuff, corn, courgette, avocado, alfalfa sprouts, and egg!!! RM23... and doesn't break the bank either.  Might head over for a dose of this soon. 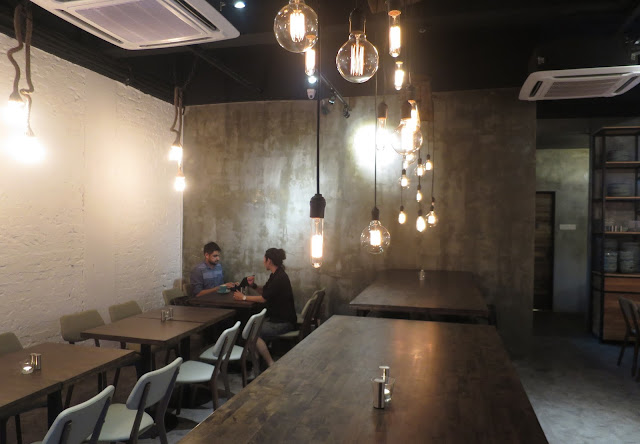 The interior is "minimalist", (which seems to be the new "opulent"), and we managed to snap this picture of an almost empty place because it was Ramadan, and this was JUST before the madding crowds came thronging in by the droves. 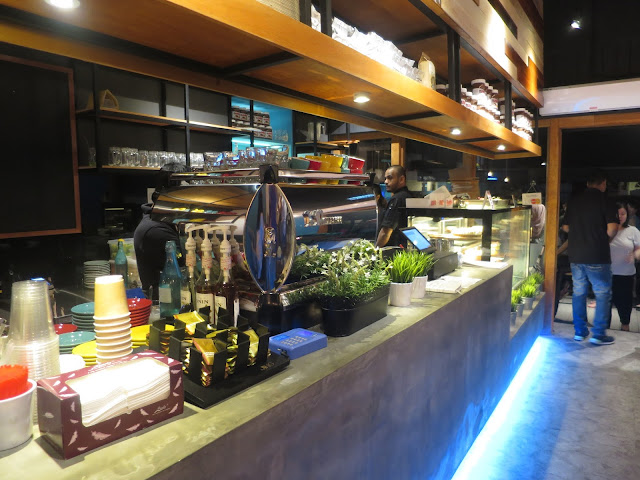 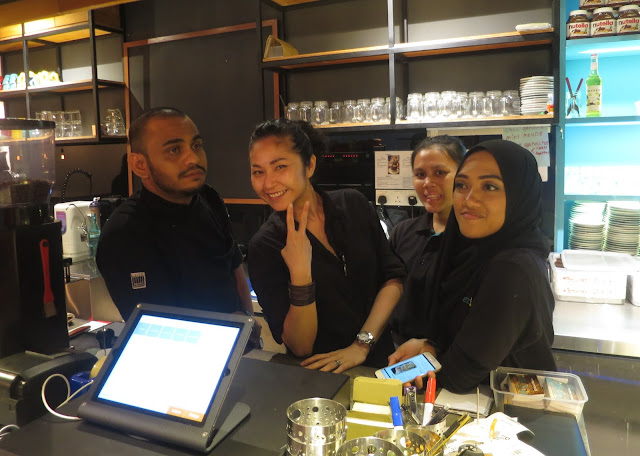 The friendly staff, and it was lovely to see an old familiar face.... 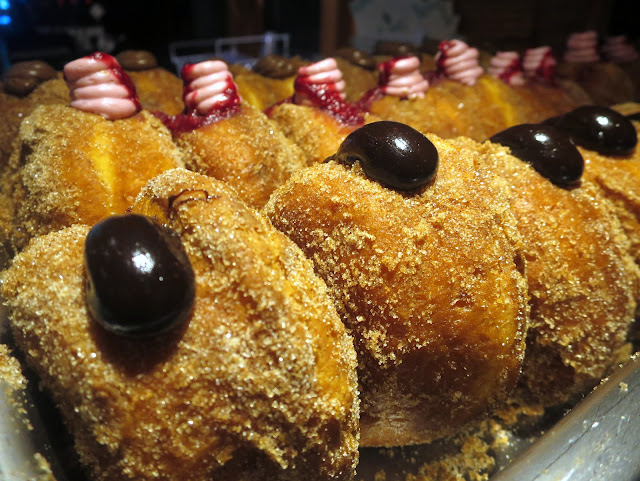 They pride themselves on their gargantuan house made doughnuts, (or is it officially spelt donuts these days?), with various types of filling.  Personally, I like plain sugar raised or cinnamon donuts with no filling, so this is off my radar.  I like the term HOUSE MADE, it's far more appropriate than "home made" especially if the restaurant isn't quite a home. 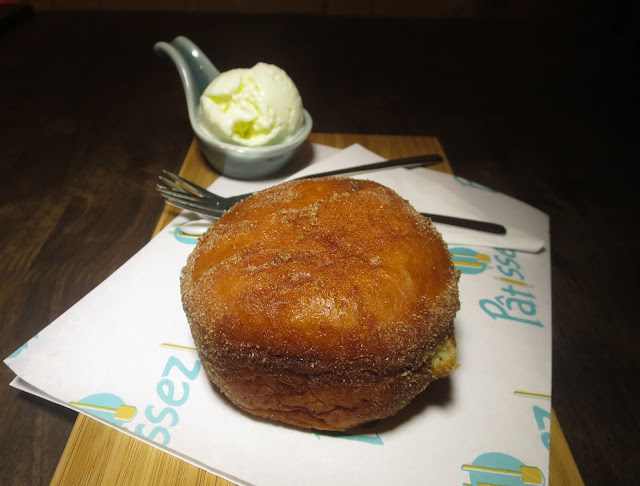 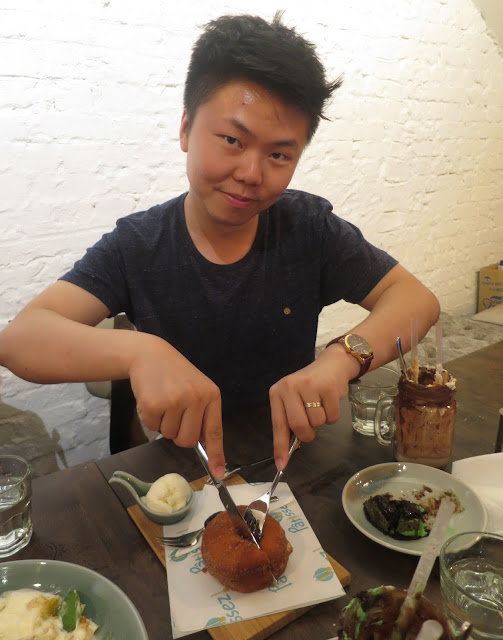 Broughtuptoshare is about to share his donut...Read their review HERE... 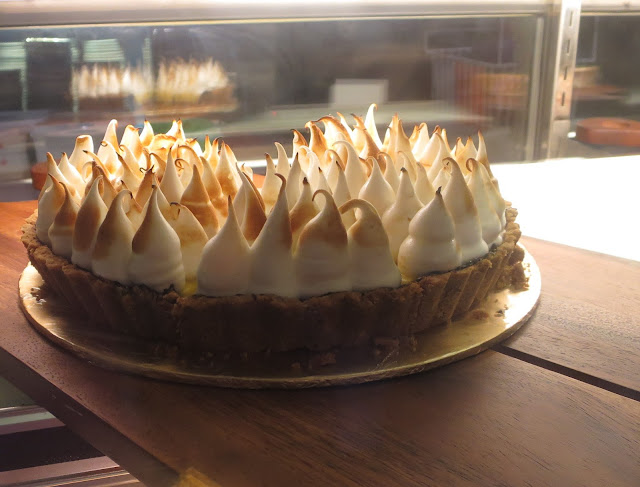 Other desserts include a variety of cakes, lemon tart, (Or was it lemon meringue pie...it's one or the other) 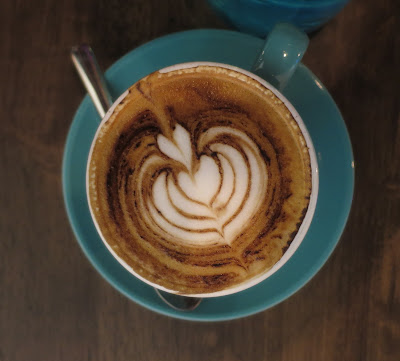 And there's always coffee art....I thought it was an onion, but it was concentric hearts.... 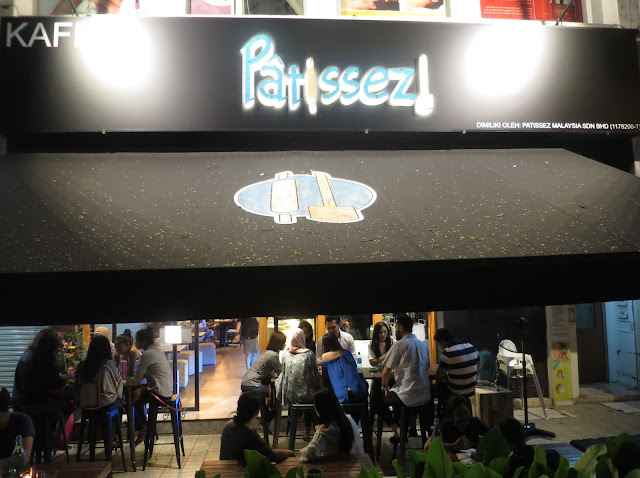 By nightfall the tables were already filling up, and by the time we left, local celebrity Bangsar Babe was actually in the queue to get in.

Congratulations to the owners of Patissez for the new and novel concept that is so lacking these days.

As far as meals go, I always like the clean feeling associated with a steam boat, all the better in cooler climes, but since 90% of KL seems to be refrigerated, (I think it's ridiculous how cold some malls and cinemas are), in all probability steam boat places also have the ambience of say, Cameron Highlands, at a comfy 22-23 degrees.

I was surprised actually to discover that Xin Cuisine, one of my favourite hotel chinese restaurants, actually has a steam boat set.  And only for RM50.

What I had not realised is how difficult it is to photograph a steam boat meal.  In retrospect, I should have done close ups of the steam wafting from the boat, those netting implements that is used to fish stuff out of the cauldron, etc etc...  Because really, as far as photos, go, you are basically shooting a bunch of raw stuff on a plate...And where IS the glamour in that!! 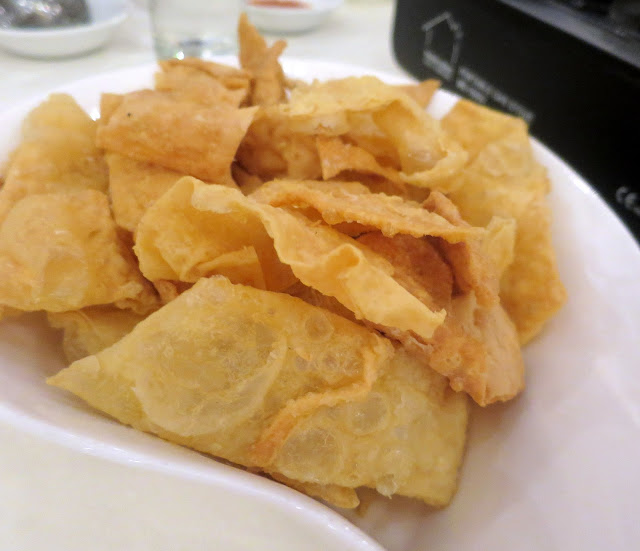 These fried bean curd skins ...were so delicious we had at least three helpings, and till now, I am unsure if they're meant to be chucked into the soup spa or eaten just like that, but either way, it was delicious. 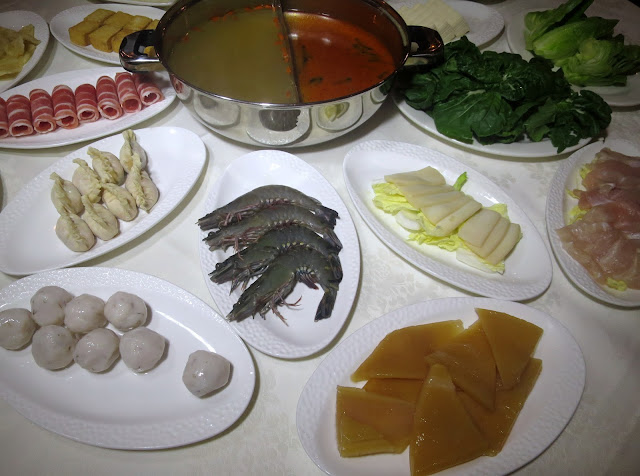 You will notice a welcom absence of any processed stuff, so no weird looking fish balls, crab sticks, (my pet peeve amongst all processed foods), .... everything is basically RAW, except for the fish balls, which are actually stuffed with other stuff, and is rather palatable. 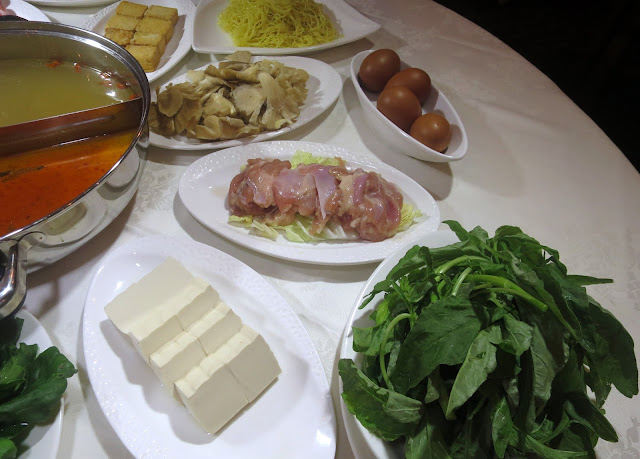 How do YOU eat your steam boat?  I have for years used the above featured egg, as a coolant, whereby I will break the egg into my bowl, and dip the cooked stuff into the raw egg.  By the end of the meal, the egg would have somewhat cooked, and I top it off with a little soup, and slurp it all down. 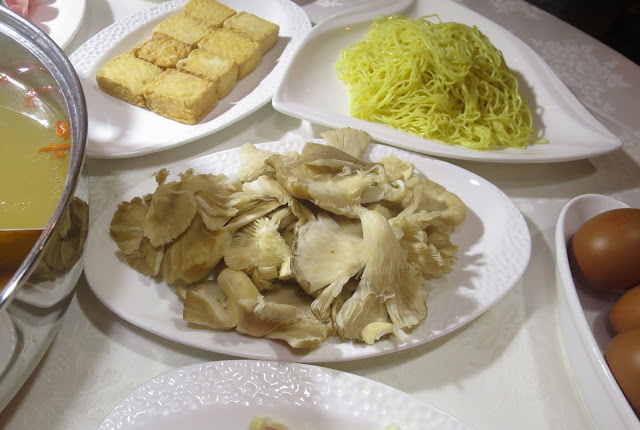 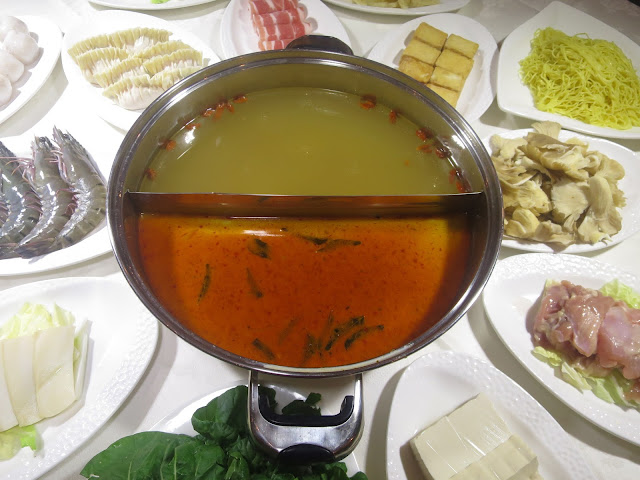 One unique feature about the Xin steamboat, is the soup,...you have a choice of herbal, clear or curry.  Curry is not quite normal, usually you get tom yam,  The Curry is not a thick laksa type curry with coconut milk, but surprisingly works well...  and the myriad ingredients makes it so tasty towards the end, you could just chug a whole bowl of the soup. 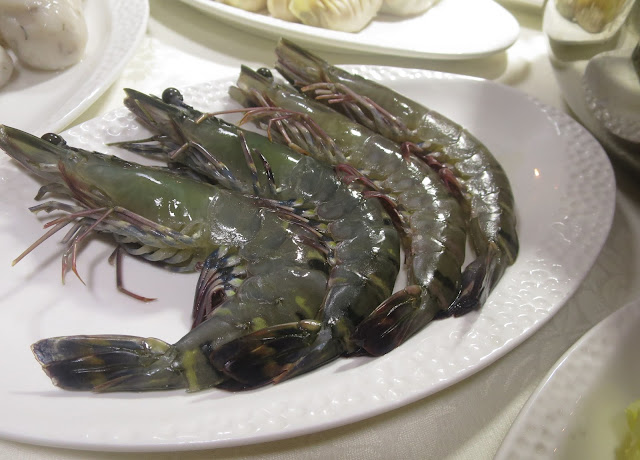 The freshness of the stuff is great.  These tiger prawns were firm and succulent when they had turned into the crimson hues of cookedness. 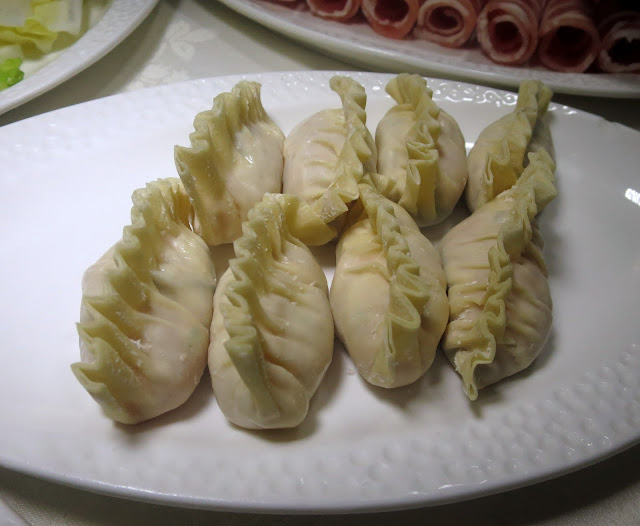 I loved these dumpling, water dogs, whatever they're called.  Plump parcels of meaty goodness, with a variety of texture, from crunch to chew. 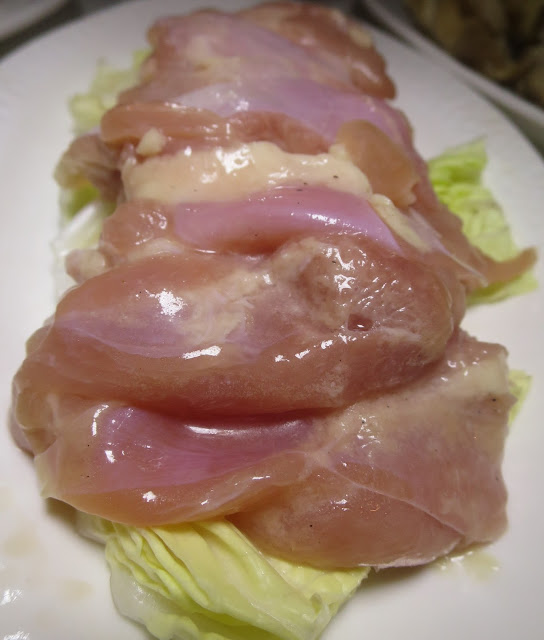 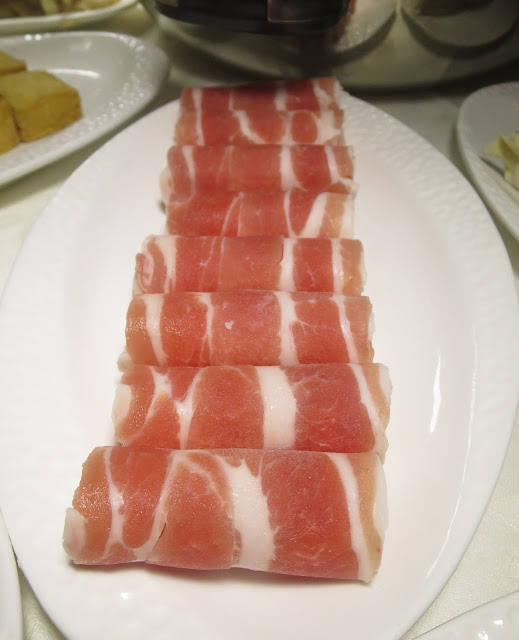 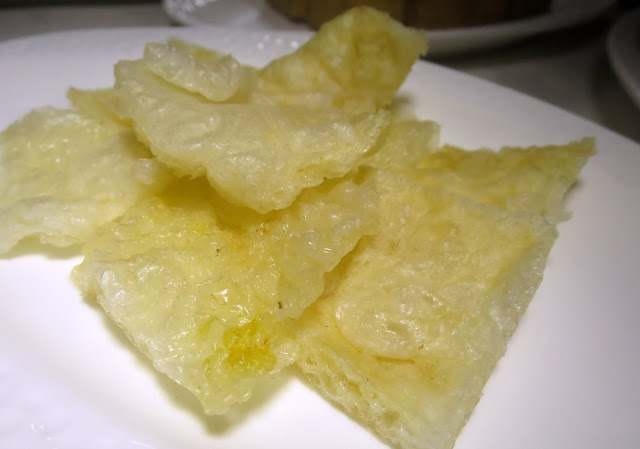 Fish maw, for those who like it... I'm ambivalent myself, and wonder who first thought of eating this. 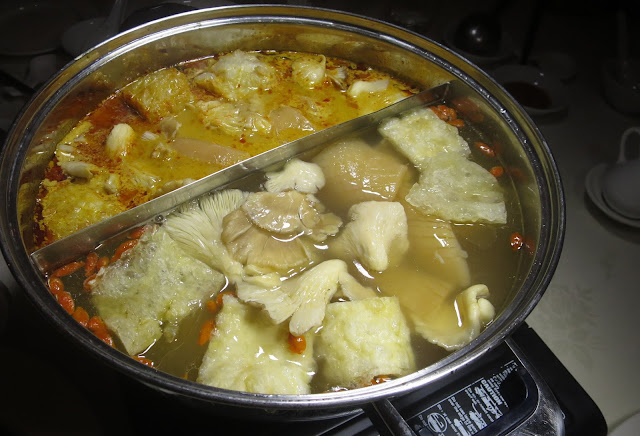 There is something comfortingly communal about steam boat, because it somehow doesn't seem like a meal you'd partake with people apart from those you are close to. 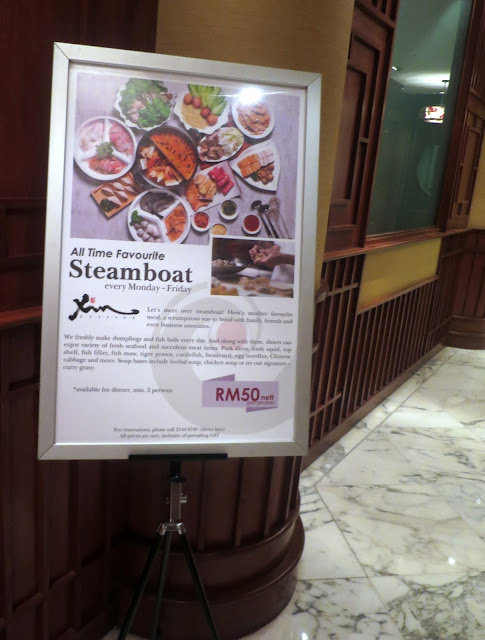 They also have an upgrade, where for a few bucks more, you get more ingredients, I forget what now.  But for me, give me my egg, non processed foods, noodles, a nice stock, and I am a happy camper.