Mid Autumn Festival Menu at Elegant Inn..and While We're At It, the 9 Emperor Gods Menu Too

True to their reputation, Malaysian Chinese ...and I suspect it's not confined to Malaysian...live to eat. The very festivals according to the lunar month almost always entails feasting of a certain kind, if it's not the excesses and yee sang of Chinese New Year, there's the dumpling festivals, the sweep the tomb festivals...hungry ghosts ...all of which see some form of communal feasting.

When Makan Fairy Godmother said that Jeanette of Elegant Inn has invited us to try the Mid Autumn Festival Set, I dropped all other plans, including an invite to tea with the Queen of England.  Okayla, maybe I didn't (drop all plans), but it is ALWAYS a pleasure to dine at Elegant Inn.  Previous posts would reveal that Jeanette is a REAALLLLY fussy eater, and by extension, restaurateur, and serves her customers only whatever passes her own stringent standards.  Suitcases of delicacies are lugged back from all over the world, to ensure a dining experience that is beyond complaint. 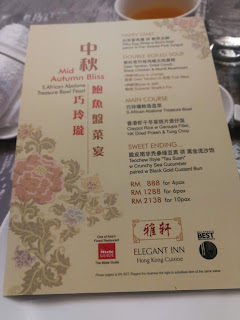 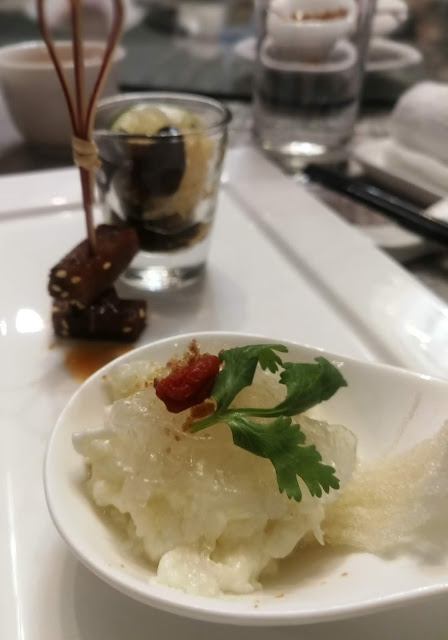 To start, Silky Egg White with Bird's Nest paired with Pan Seared Pork Tongue.  I had to think very hard if I have ever had pig's tongue... I think probably not. 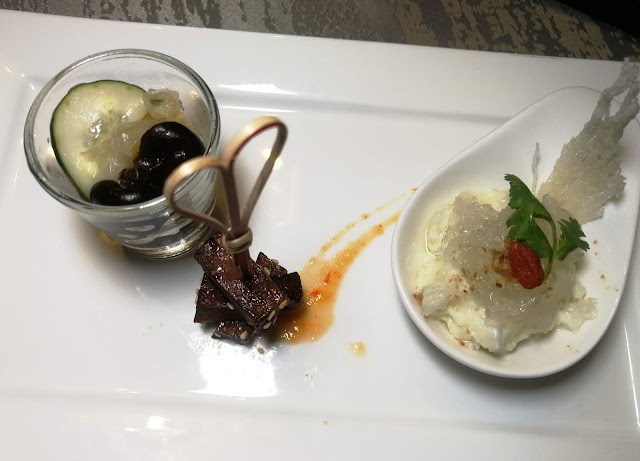 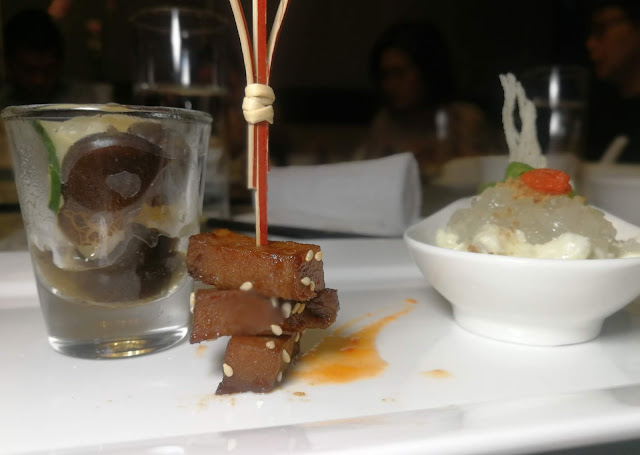 Who knew egg white could be so tasty.  Now the tongue, from this angle perhaps looks like luncheon meat, but I have to say, I love the texture and flavour.  There's a certain bite to it, yet deliciously tender. 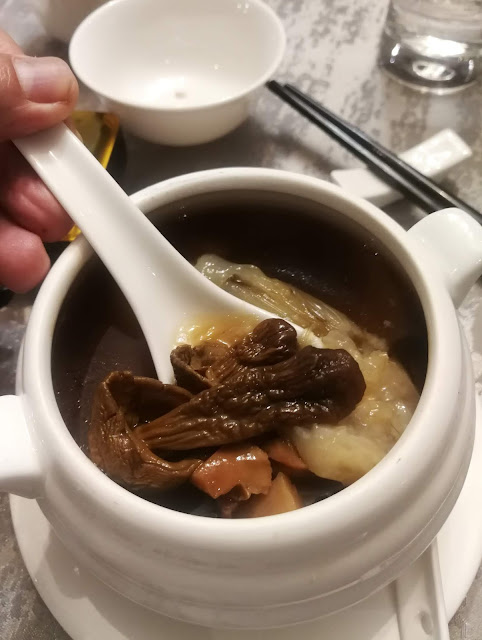 A luxurious double boiled soup, with deer tendon, dried conch, black chicken and Murrill Mushroom.   An amazingly sweet and delicate broth, the type that you know cannot have been made instantly, but only through hours of loving double boil.  There is an option to "upgrade" to fish maw replacing the deer tendon, at RM10. 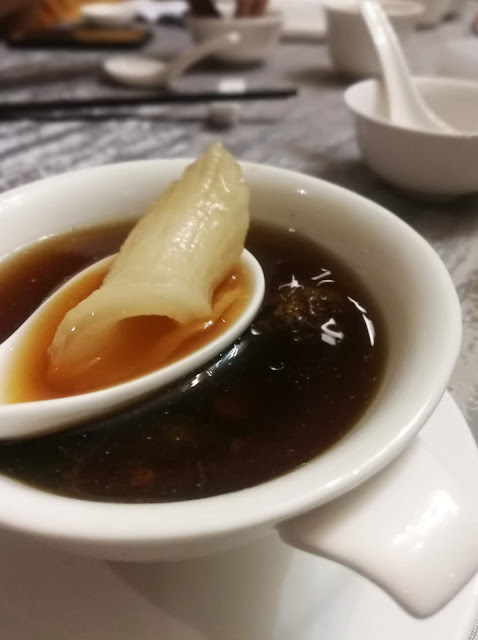 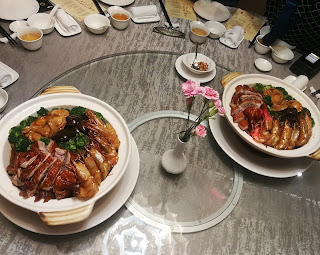 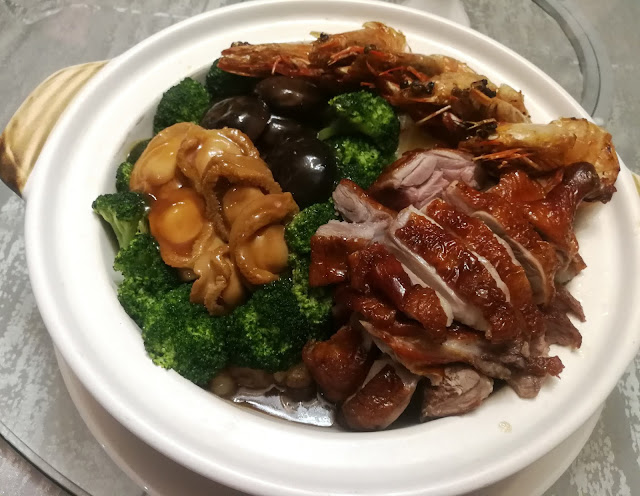 Without a doubt, the piece de resistance for the night was the South African Ablone Treasure Bowl.
Who says that Poon Choi is only for Chinese New Year?  .....Well, no one actually....it's a communal dish that I reckon can be enjoyed all year long.  Of course, it's what goes into the pot that determines its treasure worthiness. 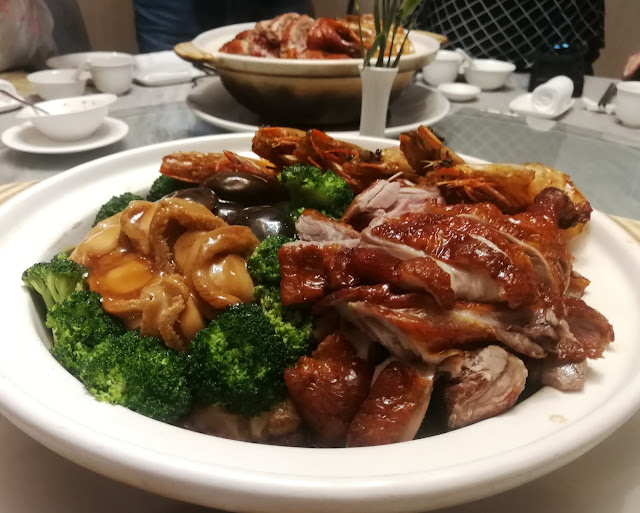 According to Jeanette, it's what's beneath the surface that is most important, and it's what imparts the flavour, not the stuff on the top.  And of course, the bottom of the barrel in this case is a superb stock made from Pork Cartilage, Chinese Cabbage, and Daikon. 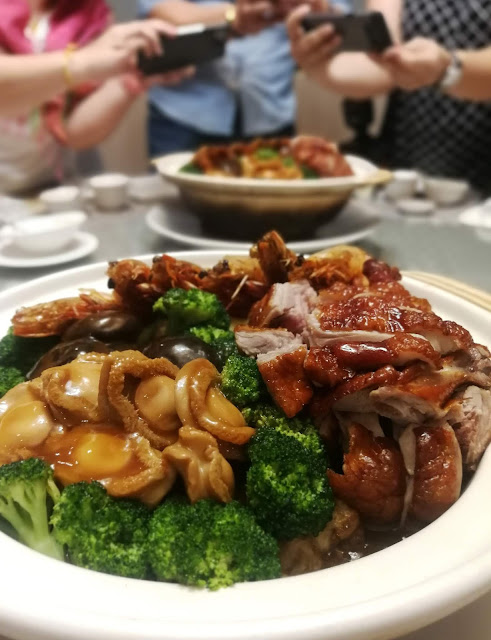 Regardless of that lay beneath, the stuff on the top were well, top notch.  I loved every single item, from the coveted abalone to the pedestrian brocolli.  The roast duck was also totally delicious.  If I had ONE "complaint", it would be the prawns which I felt were a bit overcooked.

I really hate whoever coined the phrase, "the camera eats first", but sadly, it's true. 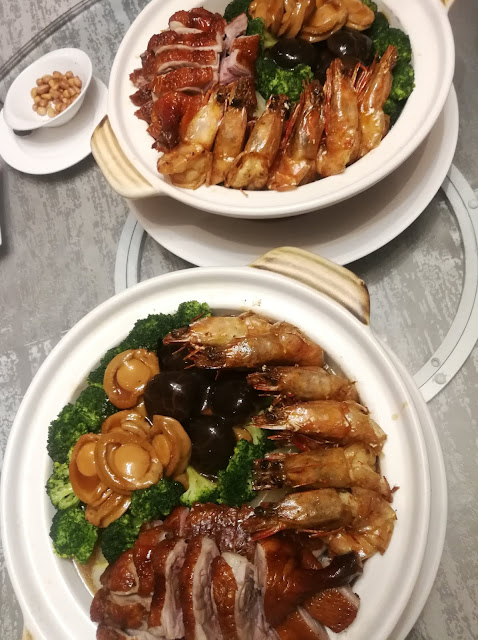 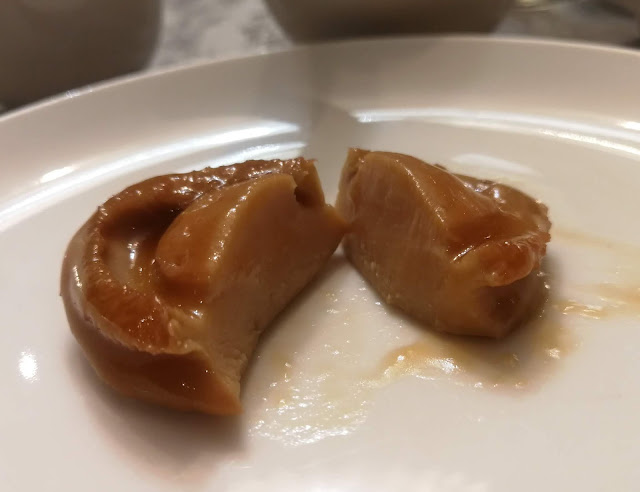 A cross section of the err...I can't remember how many lipped abalone. 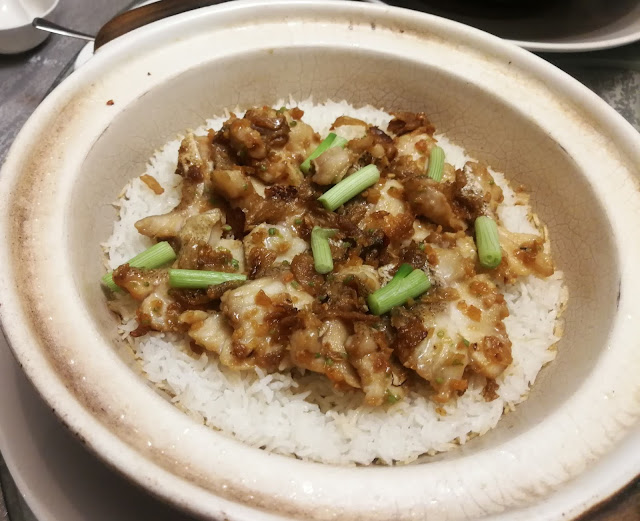 Claypot rice with Garoupa Fillet, HK dried prawn, and Tung Choy.  This is the requisite carb dish I guess.  Flavour wise, of course was very tasty, but is really quite eclipsed by all the stuff from the poon choi. 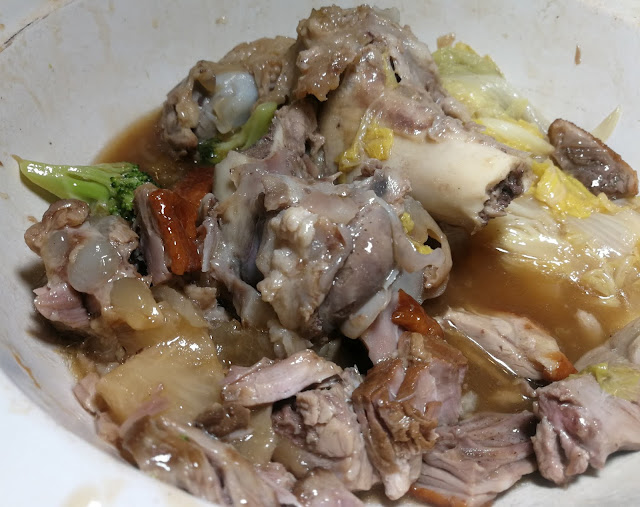 Just look at the amazing stuff at the bottom of the treasure pot.  Indeed, what lies within is most important.

Now, as if we weren't already food comatosed, Jeanette insisted we try the 9 Emperor Gods Festival Vegetarian Cuisine.  This one is only available the first 9 days of the 9th Month of the Lunar Calendar, coinciding when the Nine Emperor Gods make their annual visit. 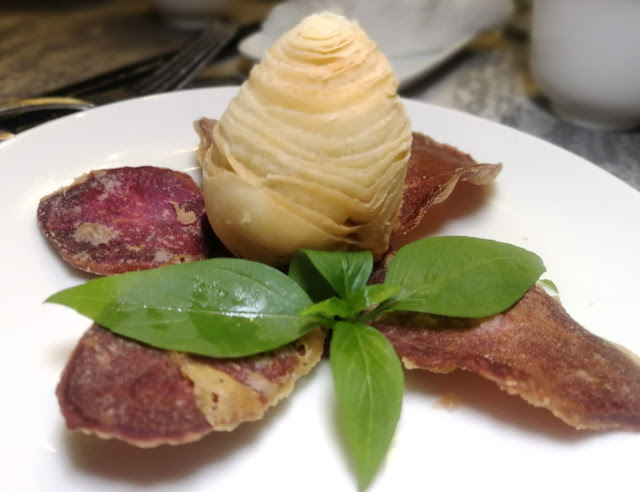 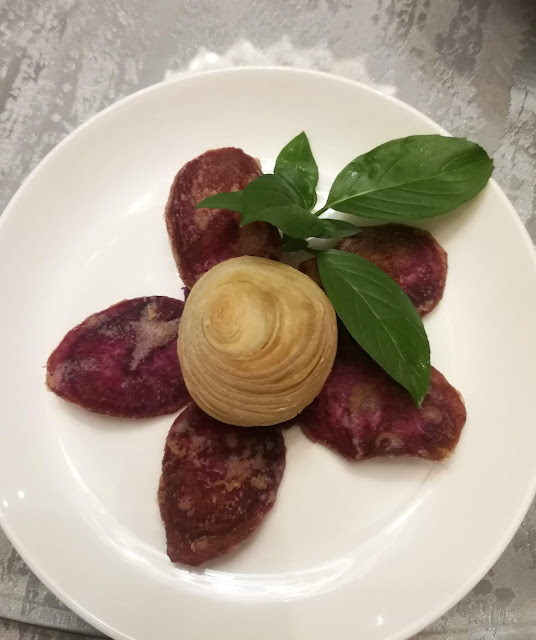 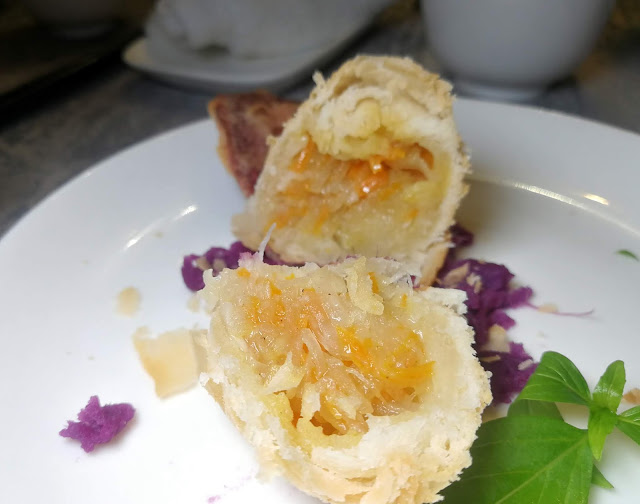 The fillings were almost like that of Pai Tee. 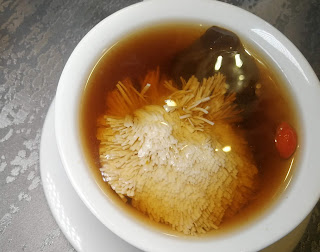 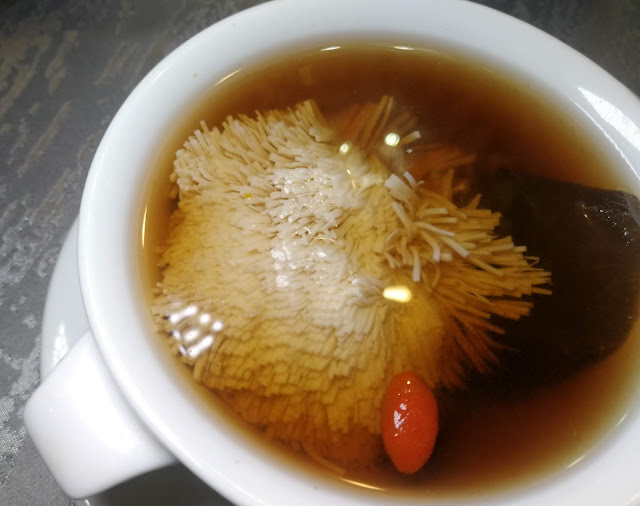 This was easily the most evocative dish, so very unique.  Tofu Blossom with Fresh Beet Root and Carrot, Double Boiled Soup.  It boggles the mind how a piece of tofu can be so intricately sliced by KNIFE.... It's of course purely for the visual, as to me it didn't really do much for the taste. 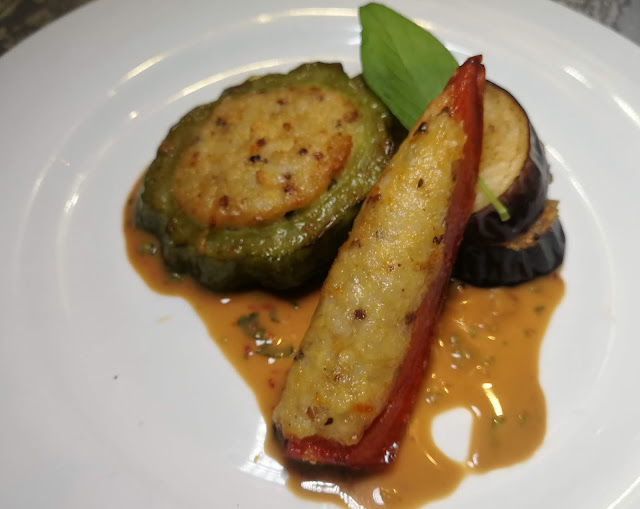 The main course of Trio Treasures Stuffed with Organic Beancurd and Quinoa. The quinoa gives it that body but of course being a  meatarian, (carnivore), I would prefer normal yong tau foo any day.  The gravy is noteworthy. 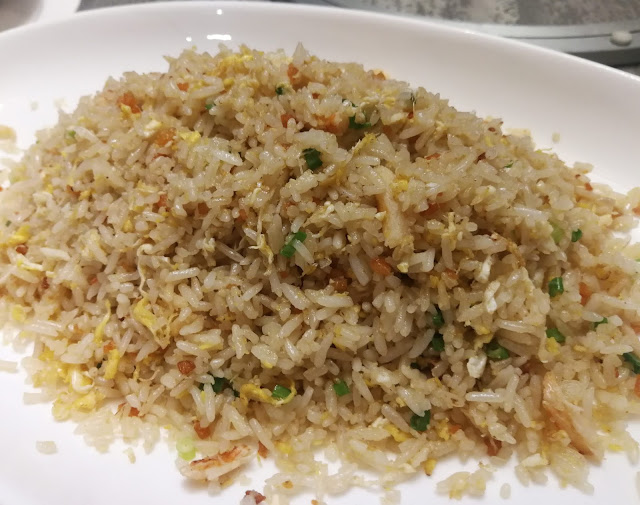 Off the menu, but their signature Fried Rice is SOOOOOOO good.  Crunchy bits of dried prawn, (not dried shrimp), with the most fluffy rice ever. And again, this is NOT in the vegetarian menu. 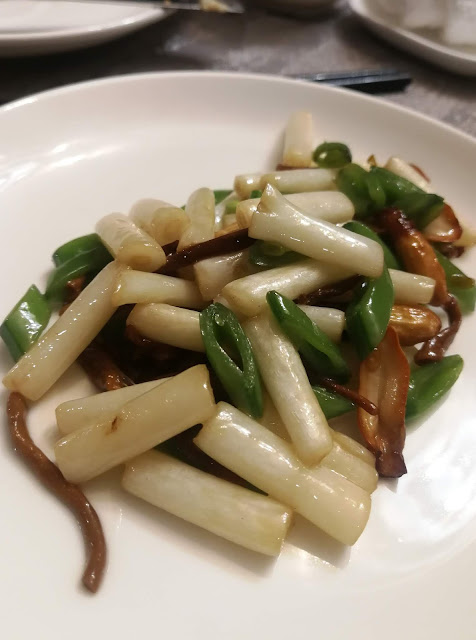 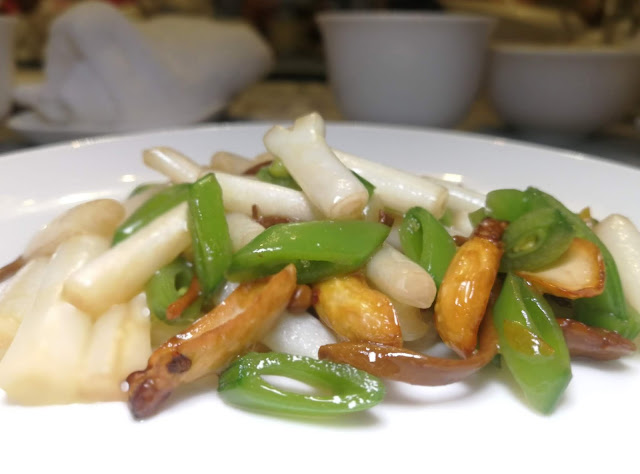 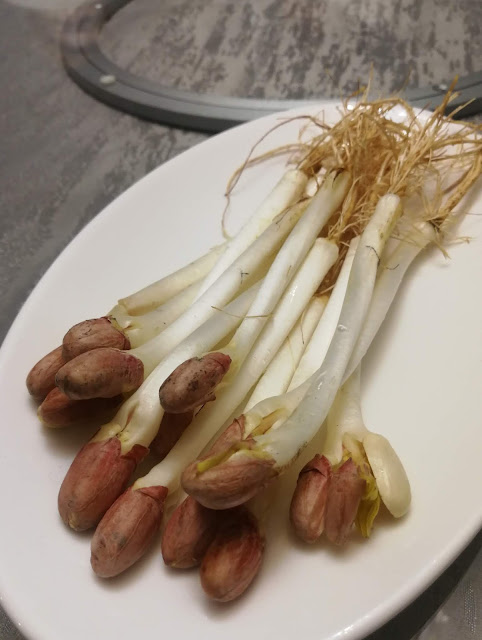 You think you've seen it all, but far from it.  This dish, groundnut sprouts wok fried with sweet pea and premium cordycep flower.  Say what?  Groundnut sprout?  It's like a bean sprout, but sprouted from groundnuts.  That sprout part is delicious, a cross between a chive and asparagus. 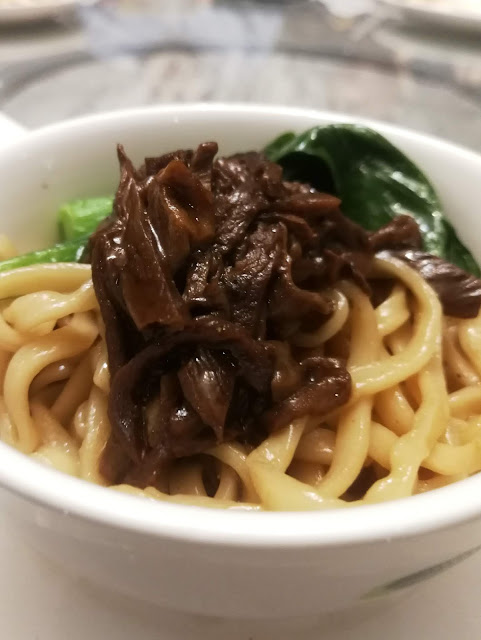 Premium wild porcini noodles.  The noodles are eggless, and are surprisingly springy. 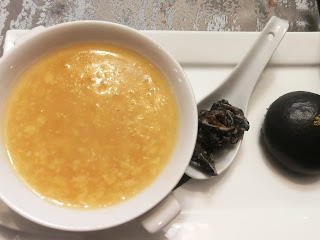 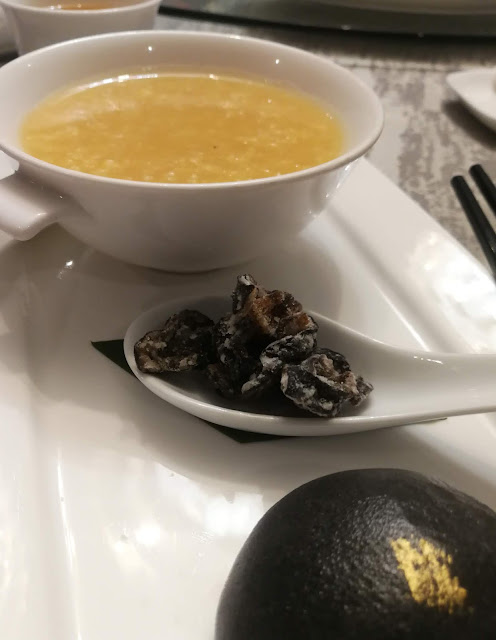 A rather unique dessert , Teochew style "Tau Suan" with Crunchy Sea Cucumber, and black gold custard bun.  Now here's a chef willing to push the boundaries.  That sea cucumber is surprisingly crispy and delectable, and the slight saltiness neutralises the sweetness of the tau suan, and therefore should be eaten together.  However, one should daintily place a piece of sea cucumber with each spoonful, rather than tossing it as a crouton into a salad, into the bowl of tau suan. That ensures the crispiness of the sea cucumber. 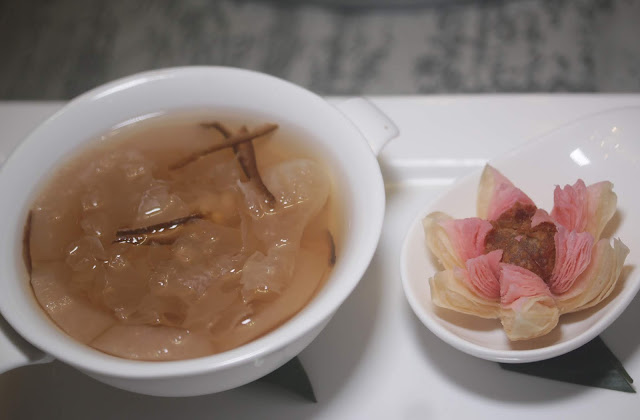 The Vegetarian menu, available only for the first 9 days of the 9th month, is RM138 per head for a minimum of two people.