It's always interesting to see what latest tipple the good people at Single and Available are bringing in to our sunny shores. Privileged to have with us the Master Distiller all the way from the distillery,  at a very elegant evening tasting soiree at the spanking new WHISKY COVE in the Pavilion Hotel.

AnCnoc (pronounced ANNOCK, the capital C being caps for a reason, ie, it's silent), is made from the purest spring water in Knock Hill (I guess that's where the "NOC" comes in), and their two copper pot stills are made to the same design as they were in 1984, with their wide bases and high necks (somehow images of swans come to mind) give anCnoc the fresh light flavour.

It is indeed very drinkable, the 12 year old glides down the throat effortlessly, is easy on the nose with hints of lemon and maybe caramel, almost sweet in taste. 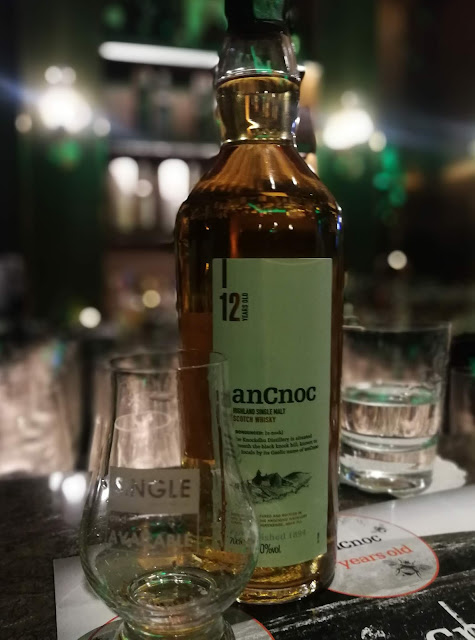 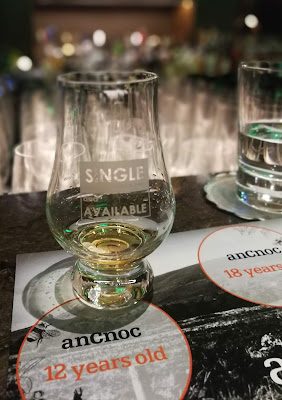 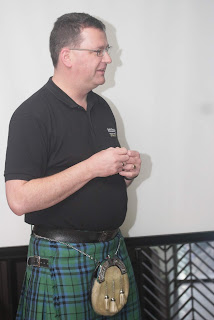 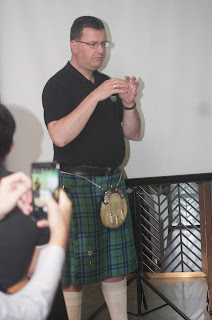 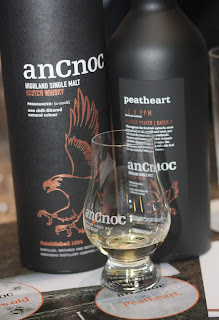 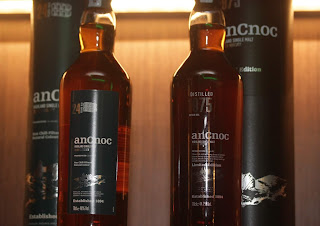 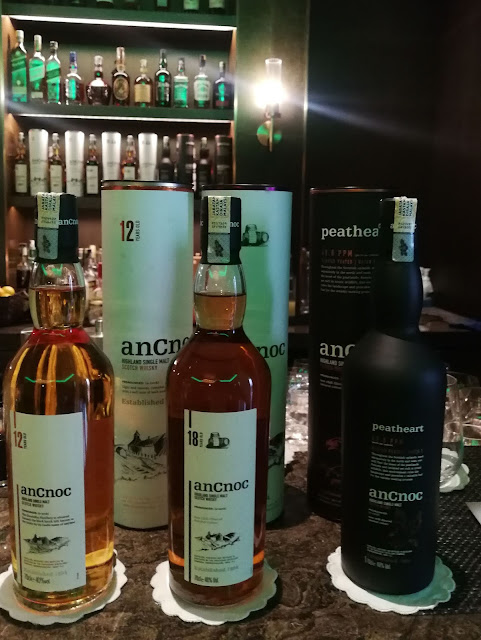 The 18 year old is one classy dame..ooops, dram.....more complex than the 12, because it is matured in Spanish Oak Ex Sherry casks, and American oak ex bourbon casks, and not chill filtered.  We didn't get to try it with ice, but presumably it will turn a bit cloudy since it's not chill filtered.  The colour is a darker amber from the 12, with a dried fruity nose, and caramel, spicy taste. 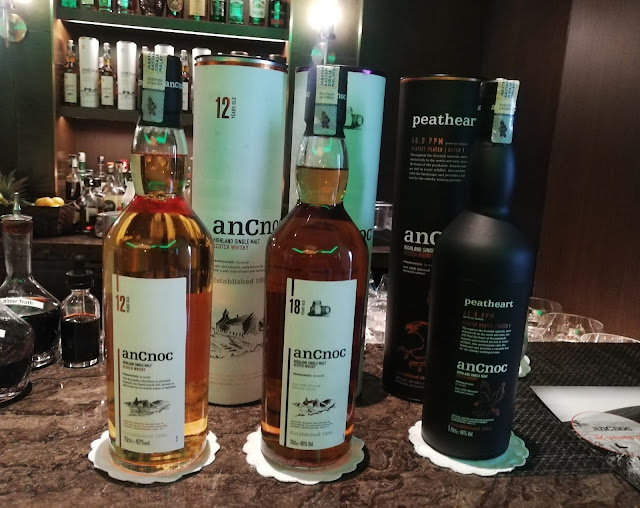 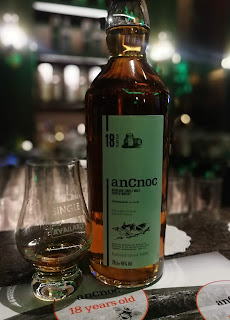 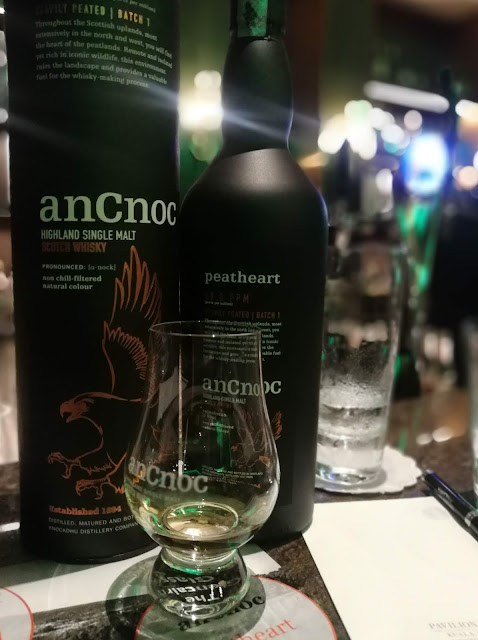 From the rich peaty soils of Scottish uplands, the peat is used as a fuel resource to fire the stills and drying the barley, hence imparting that peaty taste that is actually very mild compared to the Islay ones, making it a perfect dram for those venturing into peat but not quite ready to go all the way.

An impressive ABV of 46%, I personally enjoyed this bottle the most, as it was different, and also I love the dramatic name that sounds like a Scottish medieval war movie.

For more information and pricing, contact the good people at SINGLE AND AVAILABLE.

Posted by fatboybakes at 11:25 PM No comments:

It's always refreshing to see when chefs innovate and try to be creative.  Of course there is a place for classics that should NOT ever be changed, (I personally feel that when traditional Chinese New Year yee sang, for example becomes unrecognizable, then it is just a salad), but some items are an open canvas, leaving only the chef's mind as the limit.

Zuan Yuan recently welcomed their new Chinese Executive Chef, Tommy Choong, and we were privileged to sample his debut dishes.  For the uninformed, Zuan Yuan is the Chinese Restaurant at the One World Hotel, and is pork free.

This specially curated menu is available in the month of March. 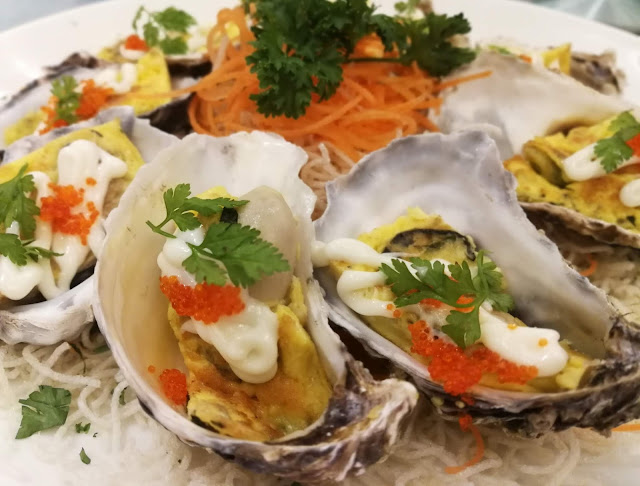 Pan Fried Omelette with Oyster and Thai Basil Leave with Mayonnaise.  Oddly enough, most of us on the table, at the mention of pan fried omelette with oyster were expecting the traditional Or Chien, but this was LITERALLY a pan fried omelette, on the oyster.  Good if you like your oysters embellished and disguised from it's original molluscy taste.  However, I personally am not a fan of mayonnaise, and would have preferred the dish without the western invention.  Egg and oyster is safe combination. 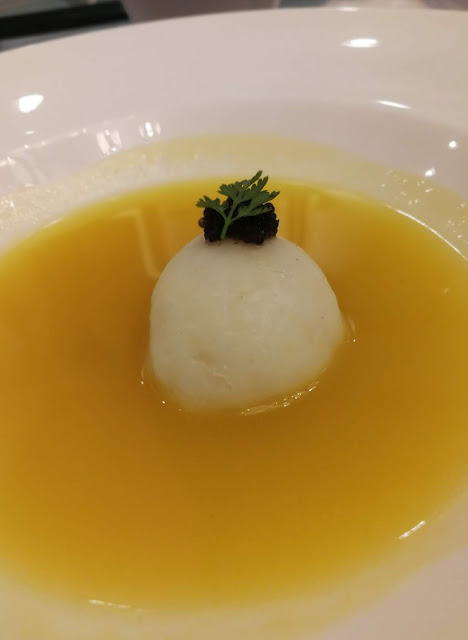 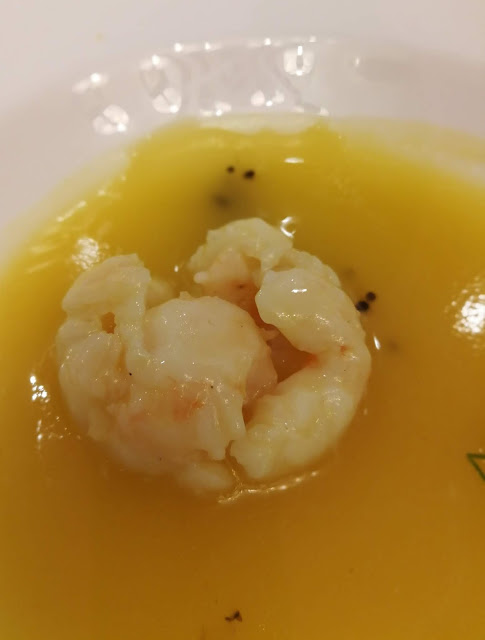 Braised Superior Soup with Scallop Dumpling and Saffron.  Without reading the name of the dish and if blind tasting, this soup is almost flawless.  A rich sweet broth, (oh, except it wasn't hot enough, but hey, when you have a table of media and bloggers clicking away like the paparazzi stalking Megan Markle, it's understandable that the heat would have dissipated), with a tasty and filling dumpling.  But when we saw the word scallop, there was some discourse as to WHERE the scallop was, cos the interior of the globule certainly looked more prawny than scallopy.  It was later revealed that the scallop is minced to make the skin of the dumpling.  Interesting to say the least. 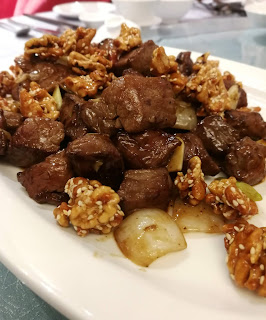 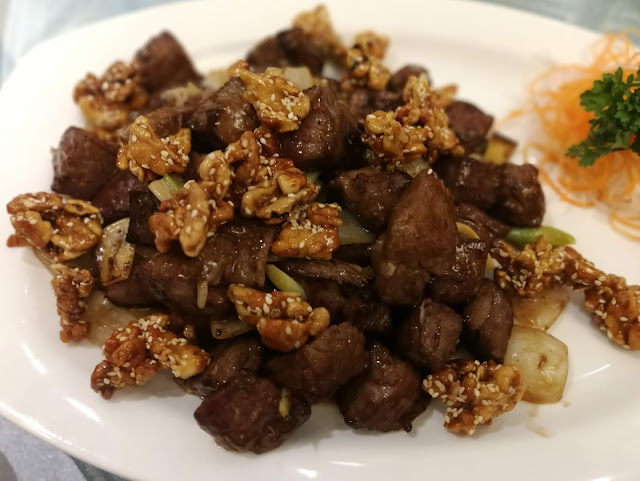 Without a doubt my favourite dish of the day, the Pan-Fried Cubed Beef Tenderloin with Chef's Signature Sauce.  Usually when beef is cubed like this, it is SO easy to overcook it, and any amount of things can go wrong, tough overcooked beef, undercooked beef.  But this dish was excellent, and the accompanying caramelised walnuts were also a hit.  His signature sauce is also worthy of a signature. 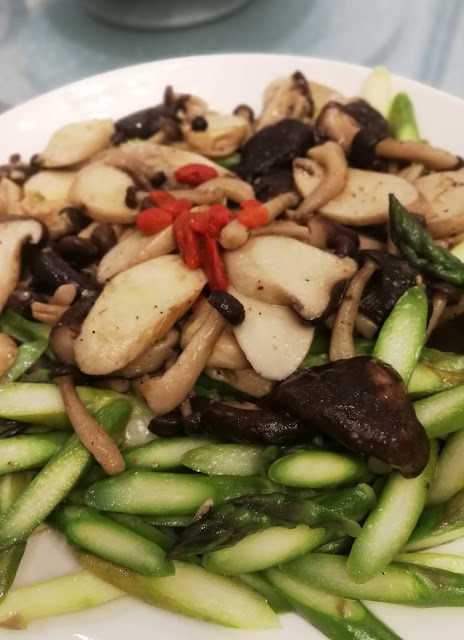 Stir Fried Australian Asparagus with Assorted Mushroom and Truffle Oil. A rather elaborate vegetable dish, not your usual token greens of brocolli and what not.  I am an asparagus AND mushroom fan, so this dish hits the spot.

Crispy Fish Cake with Minced Cabbage and Sweet Sauce.  There was some speculation if the sweet sauce was the same as the Signature sauce of the beef, but apparently it's totally different.  A pleasant dish, but has that dim sum dish kind of feel to it.  I think it would be more appropriate as a starter. 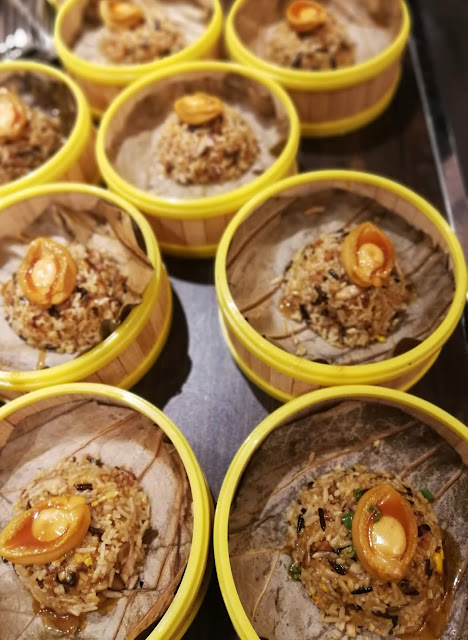 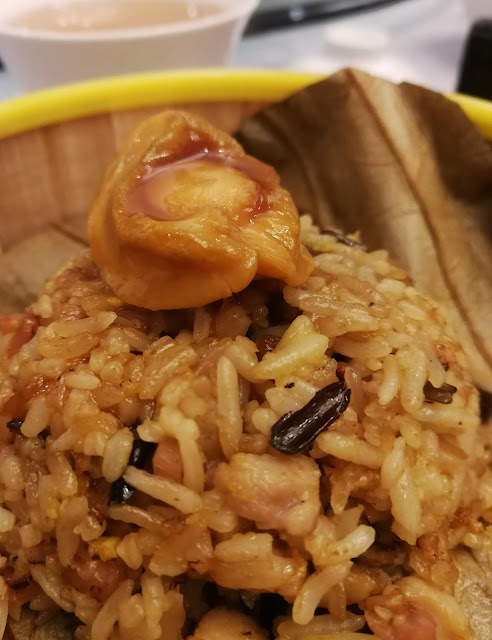 My second favourite dish of this spread has to be this Braised Abalone with Wild Rice wrapped in Lotus Leaf.  The wild rice is the black specs of rice which resemble our black pulut (Glutinous rice) but hails from Canada and is a whopping RM100 per kg here.  So savour the black grains when you order this.  The entire dish is so tasty, and of course made all the more luxurious with the scallop. 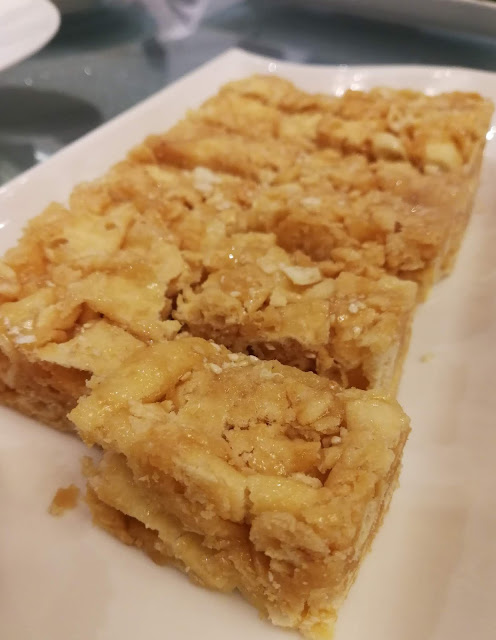 Dessert was a surprise.  Chef played around with this age old traditional sticky sweet thing called  Sa Kei Ma, but it is far less sweet and sticky than the ones we grew up with always wrapped in pink plastic.  I am unsure if this is actually part of the dishes available. 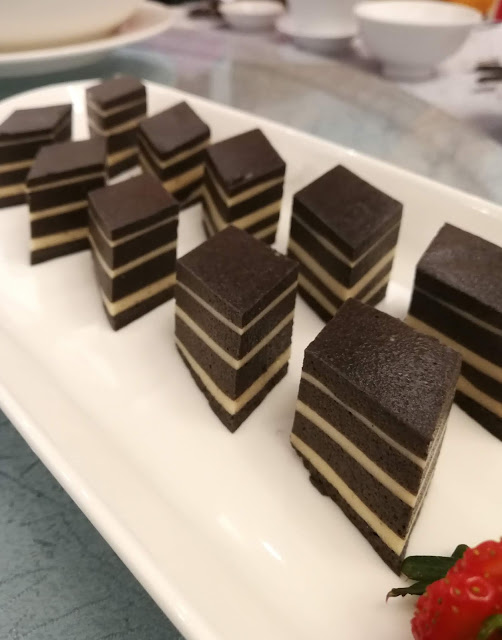 Black Sesame Jelly.  Honestly, not a fan....so I'll pass on this.  However if you are a black sesame fan and this kind of texture, (spongy and gelatinous at the same time), you will like it. 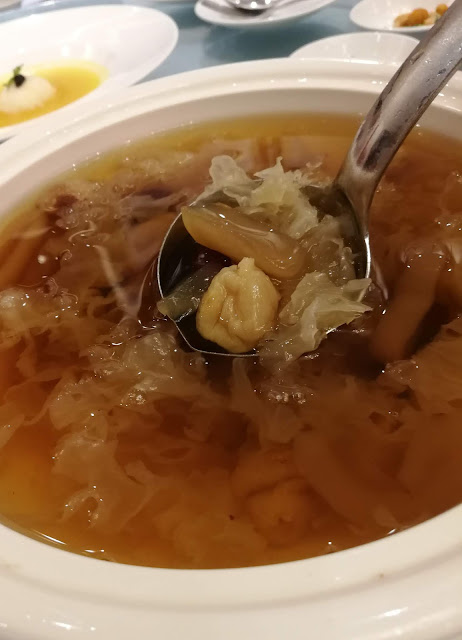 And wash it all down with a honey sea coconut and white fungus tong shui.  This I liked.  I like old sea coconut, with a bit of crunch, and realised that not everyone does.  My table mates preferred the young tender ones. 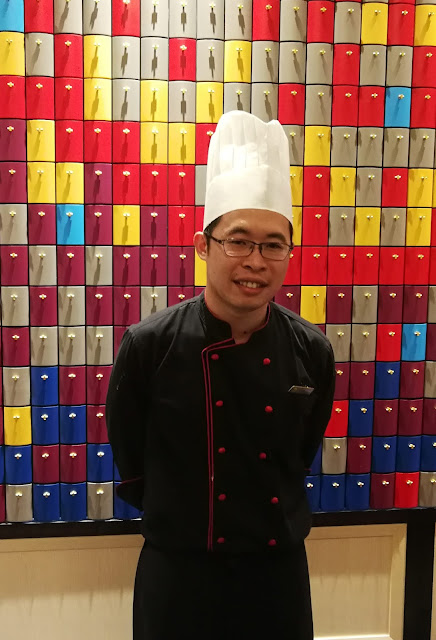 That's Chef Tommy Choong, with  a star-studded resume, who started his career as a  kitchen hand when he was 19 at Regent Hotel Kuala Lumpur (Grand Millennium Hotel today), followed by the  Mandarin Oriental Kuala Lumpur - a job he held for the next 9 years.

Other feathers in his cap include hotels like Sheraton Imperial Kuala Lumpur, Le Meridien Putrajaya and Four Seasons Hotel Kuala Lumpur.  His goal in Cantonese cuisine is to achiever "clarity", probably "qing" in Cantonese.

This menu we were privy to is available till the end of March.

Anyway, all the specialty dishes are priced at RM48 net per portion.

In addition to the main dining area, the restaurant also has 6 private rooms.

For reservations call
Zuan Yuan One World
03-7681 1159 or
zuanyuan@oneworldhotel.com.my

Posted by fatboybakes at 9:40 PM 3 comments: