Like an overseas guest that visits once a year, there is little dispute who is the "guest of honor" or in this case, the "dish of honor", at a particular dinner.  Year after year pass in the blink of an eye, we look back at our old photos and bemoan the loss of hair, the additional girth, the sagging bits and bobs, and every year, there are those "landmarks" that remind us, yet another year has come and gone.  Fortunately in the Chinese almanac, these seasonal foods seem almost seamless, one after another...yue sang for Chinese New Year, dumplings for the fifth month, moon cakes for the mid autumn festival, joss sticks for Qing Ming, goodness knows what food for the hungry ghosts, the list is endless.  And fruitcake for Christmas, of course. 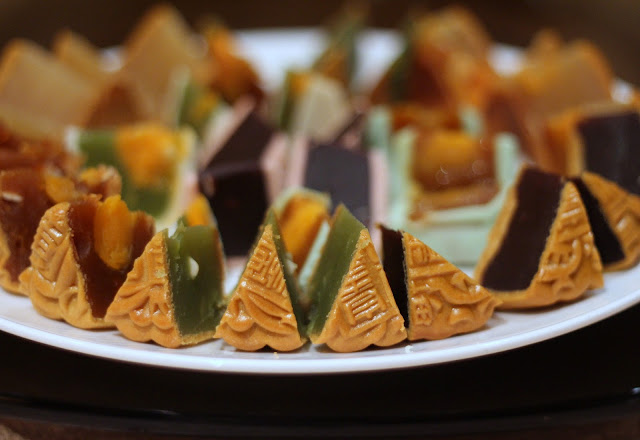 Let's not kid anyone, the star of the show is definitely these beauteous morsels, which have evolved over the last ten years, that the traditional lotus paste and red bean paste have almost all but taken a back seat to these upstart new comers.  I rarely see the nut & ham version these days.

At the Emperor Chinese Restaurant in Dorsett Grand Subang, these mooncakes are available from now till 19th September 2013, and are available in a variety of flavours.  The baked ones are Pandan Lotus Paste with Egg Yolk, Pure Red Bean Paste, Pure Sweet Potato Paste (this is a new discovery for me and I think I shall crown it my flavour of the year for mooncakes), White Lotus Paste with double yolk... and for the Ping Pei (Crystal Skin) there is more or less the same fillings, but with that delicious crystal skin.

But of course, mooncakes, as delicious are on their own, do have to be accompanied with a chinese banquet for the sake of ... well, fellowship and dining ambience.  One doesn't go to Chinese restaurant and order just Mooncakes, and sit down and eat them.  Fortunately for us, the Emperor has lovely Chinese food.  It is PORK FREE. 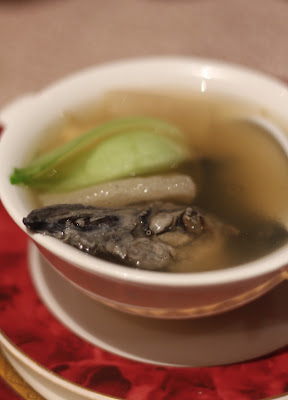 Double Boiled Fish Maw Soup With Bamboo Pith & Vegetable. A hearty soup that almost makes you feel immediately healthier upon consuming.  I am not usually a fan of pith and maw, but the ones in this bowl were surprisingly delectable. 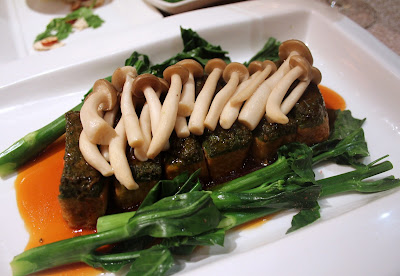 Braised Homemade Spinach Beancurd With Shimiji Mushrooms.  This spinach tofu combo has become a perennial favourite, and seems to be available in a lot of Chinese restaraunts. I loved the Shimiji mushrooms, which really give the dish that added crunch, literally, contrasting with the texture of tofu. 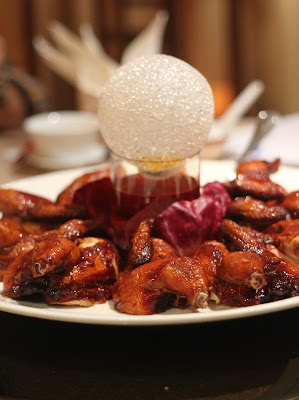 Spring Chicken, a painful reminder of what I am not anymore.  Deep Fried Crispy Spring Chicken "Fung Sar" style.  The presentation was interesting, a platter of chickens with an illumated ball in the centre that changes color. 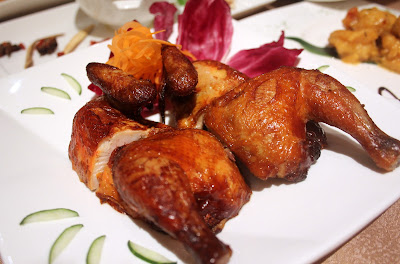 I posed a question to the table, WHERE DOES ONE BUY SPRING CHICKENS?  Cos if you think about it, I never see it in supermarkets, or markets.  So apparently one has to specially order them, as they are slaughtered at their tender age.  I love spring chickens, they're always so juicy and moist. 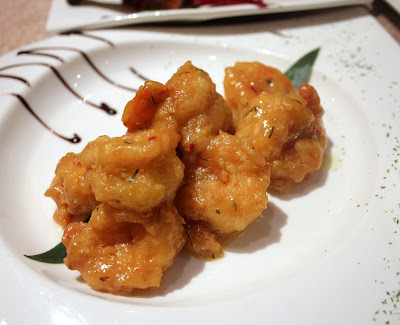 Wok Fried Peeled Prawn with Homemade Butter Sauce.  The batter could have been lighter and crispier, but the prawns were very fresh, and the butter sauce is subtle, not in your face butter, (although there is nothing wrong with that). 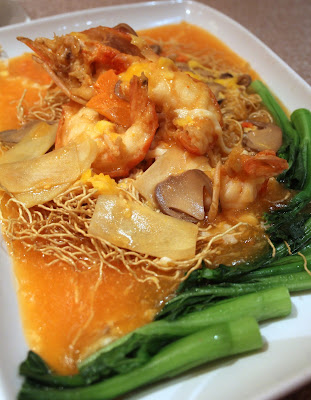 Wok Fried Egg Noodles and Fresh Water Prawn, Cantonese Style, aka Sang Har Meen.  I loved this dish, because the sauce was prawnily flavourful, without being too thick and starchy, and the noodles were also done well, crispy but yet springy, ....if you know what I mean. 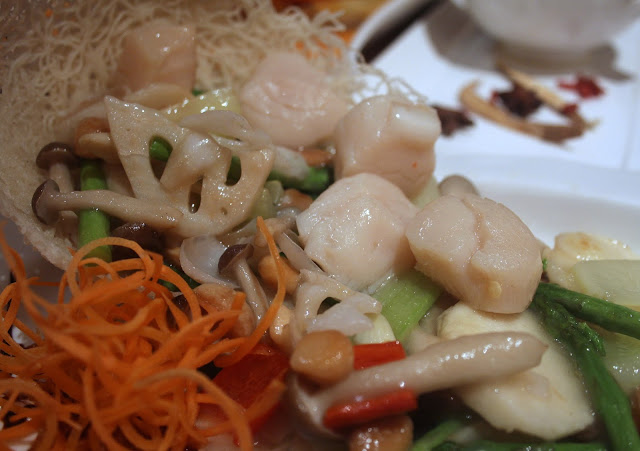 Quite honestly, I think this stir fry method for cooking scallops works best for me.  I know the term Pan Seared Scallops sound very uppity, and are found in menus of restaurants that are equally so, but for some reason, the room for error for pan seared scallops is so small, that 8 out of 10 times, I find, its either over or undercooked.  The former being worse than the latter.  But in this Stir Fried Mix Vegetable Fresh Scallop Teow Chew style, the scallops seem to be perfect.  Succulent, and really complementing the very unleafy vegetables. 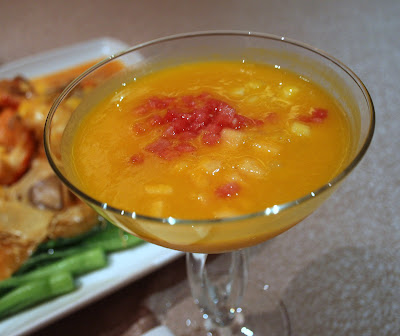 To wash it all down, a delightfully refreshing chilled mango puree with fresh mix fruit and sago. 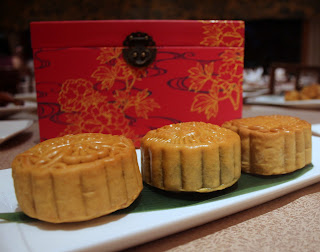 The mooncakes come in the attractive red chest in the background. 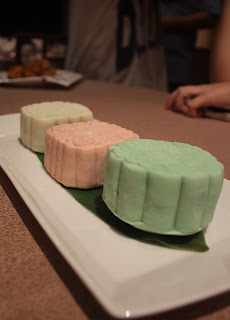 Prices of mooncakes range from RM15- RM20 each. 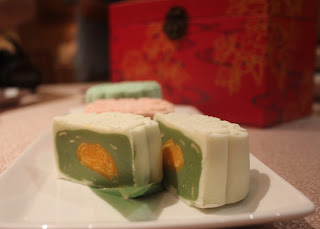 This is the pandan lotus ping pei mooncake with single yolk.  Whoever decided to pair pandan with lotus is a genius, I tell you.  It's a match made in heaven...or on the moon, at the very least. 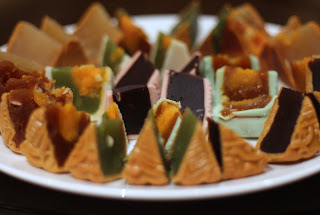 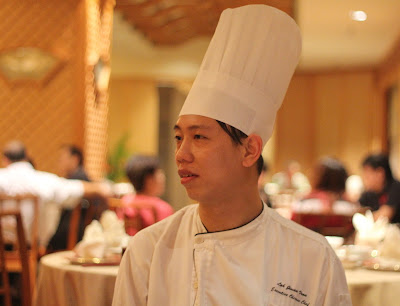 Finally, some of the mainstream press interviewed Chef Loh, who we unanimously agreed resembled the twin brother of fellow blogger, KY of KY Speaks, and even his fiancee, Haze, exclaimed, OMG, when she saw him.

For the mooncakes, guests that purchase 10 boxes (4 pieces of mooncake per box) and above in a single receipt will receive a complimentary Dining Voucher for Sunday Dim Sum Brunch for 2 at the Emperor Restaurant.  CIMB & Enrich cardholders get 15% discount on minimum spend of RM150, and Dorsett Prestige Club gets 20% Discount on minimum spend of RM150.

Many years ago, circa 1997, one of my closest friends, a Korean American named Justin, told me of a special kind of juicer, that slowly juiced vegetables, fruits, and how he consumed juices from that juicer regularly, resulting in glowing skin and untold health benefits.  It's like one of those "grandmother" stories, that are seared in your head, and it gets etched in your memory like two teenagers carving their names in the bark of a sycamore tree.

Fast forward, 16 years later, a friend on FB asks a general open question, "What is a good masticating juicer to get?".  Of course, when I first heard the story from Justin, I don't think he used the word "masticating", which of course, we all know, means to "chew".  I mean, it's a rather common word, I oft hear mothers tell their kids, "oi, masticate your food properly, at least 1 minute before swallowing", so one wouldn't expect it used in the context of a juicer.  But I guess if you think about it, that is really what the juicer does.  Crunches, and grinds, much like our molars on food, ...

So, when friend asked me to try out and review the Kuvings Silent Juicer, I was rather intrigued.  I was looking forward to that glowing skin that Justin told me about.  Now, I am embarking on this juicing journey, so watch out for a glowy leaner me in say 2 months time.

Firstly, you can check out the range of juicers HERE or http://shop.kuvings.my/.  I was surprised that there are so many different models, and prices range from the lower thousand to about RM1,500.  The model that was passed to me is the BOLD BAXTER, a sleek vertical juicer that is retailing for RM1,499-00. 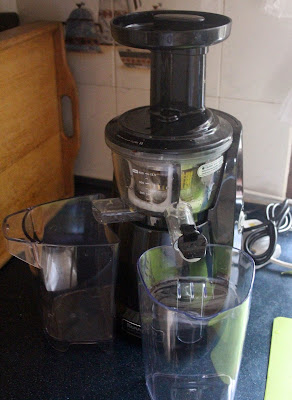 The Bold Baxter... I love the black.  Looking at the juicer, you might think it looks dreadfully complicated, and well, I can't say I wasn't intimidated looking at the parts, but it's definitely one case where the whole is greater than the sum of the parts. 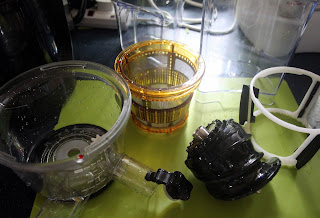 The mechanism basically has four parts, the main juicer bowl, the masticater, aka the ULTEM SCREW (that black solid thing that looks like it fell out from a sci fi movie), and the other plastic thingies. 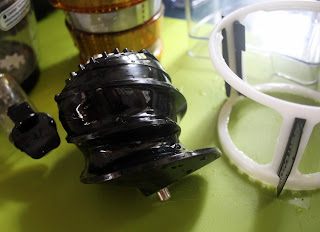 Now, what is supposedly so special about SLOW JUICING?
Basically, copied from their website:
The world certified Kuvings Silent Juicer does not have the high speed juicer system (traditional juicer system).
It has a slow speed squeezing system, which is giving 100% pure juice without breaking down the nutrients.

Assembling really isn't rocket science, as it turned out to be quite simple, and a matter of aligning dots, much like a camera lens. 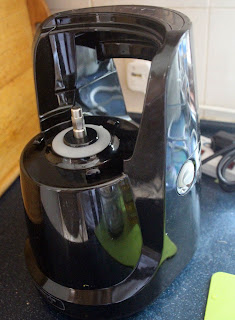 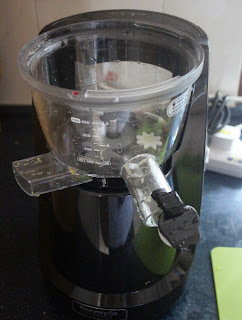 Step 1, place the main bowl in, and follow the arrow, with a slight turn until it clicks. 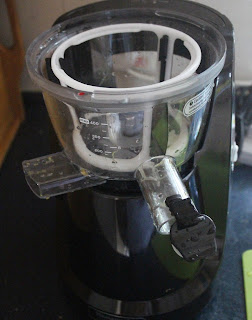 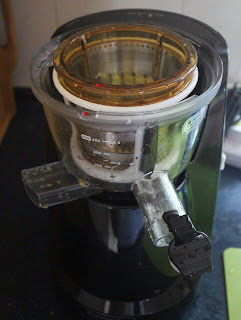 Step 3, the filter is to be aligned with the red dot. 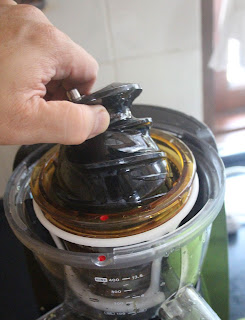 The ultem screw goes in next, before the lid.

For the inaugural blog post, I decided to make a Salad in a Glass (inspired by a recent pineapple dinner I went to recently), comprising a bunch of coriander, a bunch of mint leaves, 2 green apples, one red apple, one cucumber. 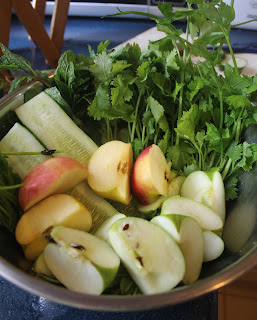 Oooh, I can feel the health already.  It actually yielded about 500 mls of juice, enough for three glasses of this size.  Son No 1 said that it's the first time he's heard my dad say "YUM".  (Dad is not really a food kinda guy).  It was rather yum, if may say so myself.

Anyway, you can watch the video here and see for yourself how it works. 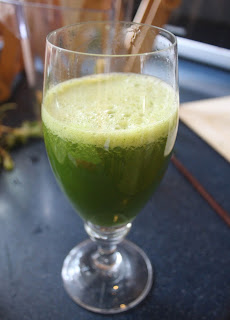 Salad in a glass 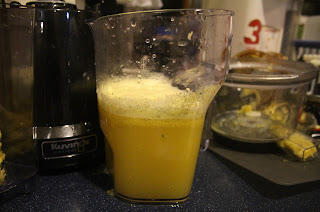 One pineapple yielded this much juice, around 600ml.

To you juicy lucys out there who love juicing, honestly, (and I'm not saying this just because...) the texture of the juice coming out of this juicer is totally different.  The pineapple juice is almost creamy!

Anyway, you can purchase online, and for the vertical juicers, (Betty, Chloe, Baxter and Rob), if you key in "FATBOYSGIFT" in the promo code section, you will get the mincer unit for free.  Now, if you check the website, the mincer can be used to make frozen fruit sorbets and "froyos".  (Will blog about this frozen fruit yoghurt thing next)
This promo is valid until 31st August 2013.

But, if you are a SINGLE PARENT, or buying for a CANCER patient, (obviously it's an honor system),  there is an ongoing promo (key in "SINGLEPARENT" or "CANCER") in the promo code, and you will get a RM250 discount.  (Cannot be used in conjuction with FATBOYSGIFT promo).