Yikes!!! I've been baking everyday since Friday. On Friday, it was the birthday cake for friend's birthday party, (no cell group), who requested the flourless chocolate cakes. Again, let me reiterate that decoration is not my forte. I really need to attend some cake decoration class, so if any of you have any pointers as to who conducts these classes, without making it like a diploma course with commensurate pricing, do let me know. 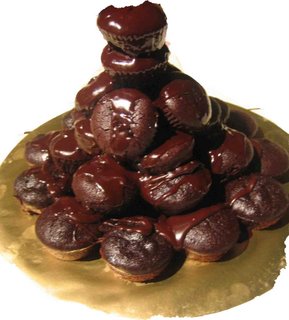 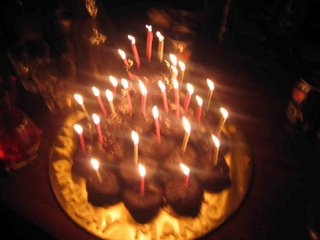 Starting with Friday night, this was the outcome of 34 pieces of flourless chocolate cakes piled together. The problem with this cake was the stress involved in getting it to the destination without it toppling. Of course, I had structurally enforced with with skewers, but you never know, it's like the equivalent of 10 on a Richter Scale when the car goes over some potholes in KL!! 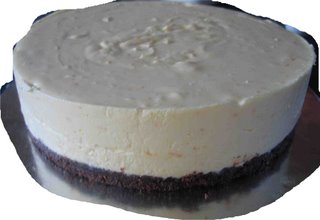 On Friday night itself, I get an order from Datin, asking for passion fruit cheesecake, lemon meringue pie and scones. Aiyo, wheeeeeere to find passion fruit at such last minute. Hardly something I can buy in the wet market, or even cold storage. After much objection, she resigned herself to any cheesecake. I asked if she wanted the chilled variety or baked. Fortunately, it was the former, so she got an orange cheesecake. I have NOOO idea how this one tasted. Lemon Meringue Pie, now becoming a standard order, wasn't much of a problem.

Fellow gym member had ordered a Durian Poppy Seed Cake as well. (all this was for Sunday morning pick up). So on Saturday night, before going off to join my pals for a spot of Pok Kuat (Dead Gin), I had to basically make, the cheesecake, the lemon meringue pie, the durian poppy seed cake, and the sponge base for Baby Boy's 4th birthday on Sunday.

On Sunday, after church, and after a nap, had to prepare Scones, Chicken Pies and assemble the chocolate oreo cake for the birthday party. 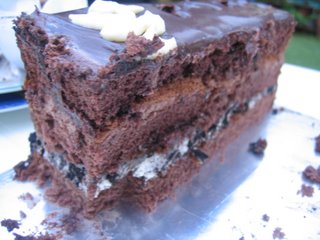 The chocolate oreo cake, which in my opinion, tasted better than it looked. I had just plonked on some power ranger toys as decoration, coz that's what the kid wanted. Then again, I spent all of 15 minutes icing it, with ganache. 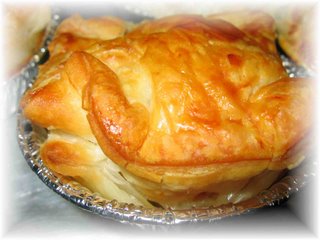 These chicken pies sold out like hotcakes at the tea party. It was a last minute inclusion in the menu. Quite handy albeit a bit more costly to use the disposal tin foil pie containers. 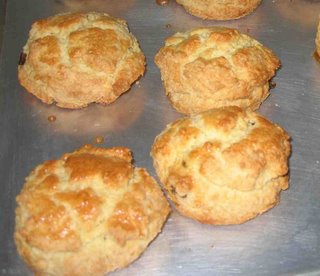 The scones which were also popular, but not as popular as the pies.
Although I did get the following compliments for the scones:

I have a great secret for baking cheesecake, always make sure you place the cheesecake pan inside of a larger pan filled with water. this ensures the most moist best tasting cheesecake. Looks like I might be in KL in October we can make one (the baileys choc cheesecake is especially good) Also I can show you how to do some cake decorating, has been a while but I used to be able to make roses for cakes

Anonymous said...
This comment has been removed by a blog administrator.
7:02 AM

fatboybakes said...
This comment has been removed by a blog administrator.
11:25 AM

venetia, hi, thanks for the link. arrrghhhhh, a bit shy to have name published so i've deleted ur comment, since i can partially edit it. can u please repost minus name...u know la, i very the shy one leh.

clay, thanks for the tip, but yeah, the baked cheesecakes cookbooks do prescribe that method of baking... heh heh, so it might not be such a secret after all.....but thanks though, and look forward to learning from the master.

Flower said...
This comment has been removed by a blog administrator.
11:24 AM

haha, flower, thanks. size wise, you MIGHT be half of me actually....
but aiyo, for you, living over there in perth, no domestic help, i take my hats off to you la.