[ERRATA : Thanks to Lin for pointing out the mistake in the recipe]

Much as I adore her, I have to say her latest TV series, Nigella Express, hmmm, is a bit iffy. Too many store bought ingredients, and too many canned goods. Then again, I guess she did say it was "express", and everything I suppose, really, unless we are doing everything from SCRATCH, like planting the wheat to make our own flour, and rearing our own cow for our own butter, is to a certain extent pre-prepared, so, it just depends what level of pre-preparedness we're willing to espouse.


In case no one understood what I meant, well, for example, using ready made puff pastry, as opposed to making it yourself. Well, who bothers, especially in our hot climate, to really make your own. And I was telling Lemongrass that you can now buy ready made tart cases (shortcrust) from Marks & Spencers in Gardens. She reckons that making a Pecan Pie using that would be cheating, as the filling is so easy to make. So I guess where is the cut off point for when using "ready made" stuff is acceptable? Tossing stuff from a can and a packet and preparing a salad using prewashed premixed salad leaves? Does that constitute home made? Ah well, the lines are blurred in our modern day and age.

So, when I saw her making her Hokey Pokey (or honeycombs) from scratch on Nigella Express, I was rather intrigued. She was saying, why bring flowers when visiting a friend, (not that I would anyway, unless the friend was in a box....even then, being a practical chinaman, I'd probably give money instead), and proceeded to explain how she always whips up some home made hokey pokey.

Anyway, on Saturday morning, it was unusually unhectic for me, and I found myself twiddling my thumbs, so I thought I had to try and experiment with her recipe, that only called for THREE ingredients, and cheap ones at that. (please do NOT bring me hokey pokey when you visit.....).

Dig how EASY this is.
Stir the sugar and syrup together in a saucepan. (before putting it on the heat)
Put on heat, (as in on the stove, not the other kind of "heat")
The mixture will slowly melt. Do not stir, but just lightly swirl the contents. (that means lifting the saucepan and tilting it in all directions, except upside down)
When it has all melted to a glorious golden caramel, take off the heat.
Add the baking soda, and whisk semi vigorously. Like a science experiment, the entire mixture will froth and bubble like foam coming out of the mouth of a demon possessed man.
Pour the frothy mixture onto a prepared silicone sheet or non stick baking tray.
Let nature take its course and the froth will harden.
Chip away cooled hokey pokey into chunks, or squares, or whatever. 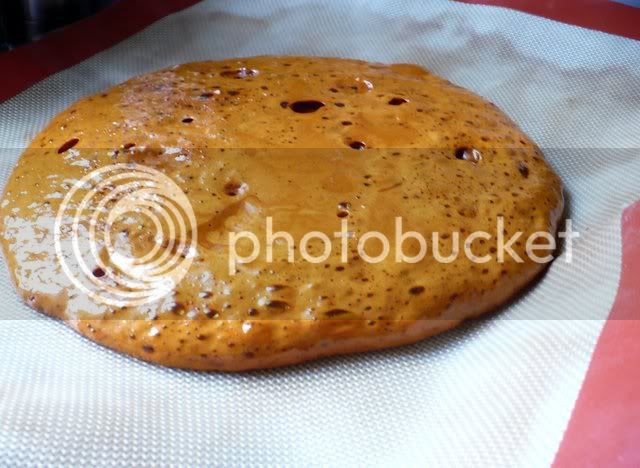 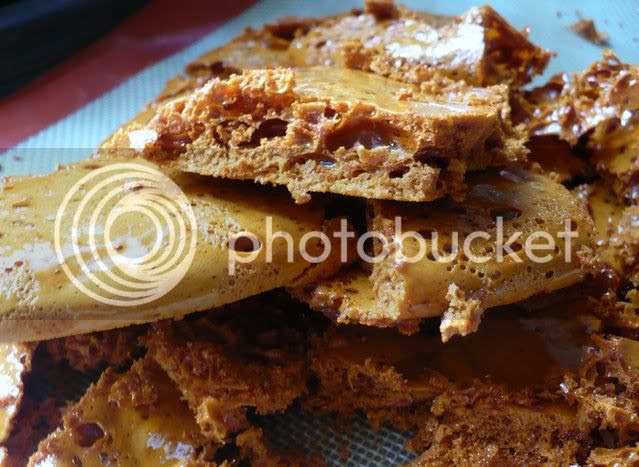 Well, I think I overcooked my sugar so it turned out bitter. Also, it didnt remain in that wonderfully crunchy honeycombey state for long, ....maybe it needed an airtight container. Anyway, because it was a bit on the bitter side, I decided to crush it up and chucked it into the tiramisu dessert I was serving my gambling kaki. Turned out well, coz friend was raving how the bitterish bits complemented the sweet mascarporne. Oh well, I figured you can't go wrong anyway, since cocoa is also bitter, and that's sprinkled liberally on tiramisus.

So, calories ARE cheap. Mothers, (and fathers), its a great visual for your kids, especially when the mixture foams up like volcano lava spewing out of a pot.... so do give it a try if for nothing else, the kick of watching the reaction.

Hi,
I saw that episode too. I don't think I can just eat this Hokey Pokey on its own. Anyway, been reading your blog lately and love it !

i agree with fbb , puff pastry aint easy to make at home due to hot climate unless u have a proper kitchen. hmm , will try the recipe with some roasterd nuts later . thx ffb

ah, breadpitt, coming from a pastry pro, i guess i am justified then, in not bothering to make puff pastry. eh, go and teach us la. i set you up with the owners of cooking house, wannor not?

min, thanks for dropping by, and for the kind words. i also cant eat the HP on its own....

helo, just wanted to know the reason u decreased the amount of golden syrup used and increase the amount of sugar at the same time.... Nigella mentioned 100g castor sugar and 4 tbsp golden syrup. You did that to balance the sweetness? (sorry if i sound rude,Im just curious cuz I want to try this recipe also!)

hi lin. oh dear, to be honest, i just typed this in my office, from memory, without the recipe in front of me. you might be right. although in my mind, i only measured out 3 spoons of syrup. let me verify, but if nigella said that, then that must be correct la. sorry!!

Love how you re-cycled the bitter Hokey Pokey creatively into tiramisu and got rave reviews some more! Nigella would be so proud! :D

P.S. Yes, calories ARE cheap but getting rid of the fat they create takes nearly FOREVER. Sighs...

P.P.S. (Looks at above post-script.) Yes, I know I'm über-skinny... but before anyone kills me, it don't mean I'm not afflicted with a bad case of belly flab oso ma...

oh, the show..frozen food aside, i fell asleep during last week's show..even those "things" which looked great in green couldnt keep me awake...sigh...

but am waiting to try the chocolate mousse with marshmallow..next month la...

As for the milk you use, please remember how you played midwife to the mum-cow who gave birth to the calf that eventually ended up giving milk out of her pretty teats into your silver bucket in the shed in your backyard, dear FBB. *_^
(I often feel rather cow-y in cow-filled Switz. Thank goodness I don't lactate.)

ask newbie like me to teach, i will be very nervous. btw im not qualify to justified u also, lol!

breadpitt, haiya, tell you wat, i be your mouthpiece, you be the hands.

kennymah, thankyew...yes, i've always prided myself on being able to recylce well. and dont even START about the skinny thing.

you should encourage meena to start with this kind of recipes..! HAHAHA

i love this too..