It was a long awaited lunch, that had been postponed a few times, which was a blessing in a way, because it gave the hostess time to boldly experiment with ambitious new frontiers, such as crispy skin siu yoke (roast pork). Anyway, I underestimated the time it would take to get there, and as I was nearing the place, I got a call from a rather frantic sounding Pea asking where I was. However, I wasn't disappointed by the youth of today, as Nipples was only milliseconds ahead of me. The couple who lived the nearest, in Shah Alam, ie, Lemongrass and Bald Eagle, sauntered in the latest, like Paula Abdul and Randy Whatsisname when they missed the cab for the auditions.

Most of the invitees were already huddled around the dining table by the time I got there. Pea and Mr Pea were dishing out the vast array of food they had been slogging over. Very impressive. Everything they served was home made.

Even the fish paste for this glorious yong tau foo was hand beaten by PP. It takes a woman of great strength, and faith, to actually make their own fish paste from scratch. For me, its the Magimix, or forget it. And to laboriously stuff all the bean curd and chillis with the paste, and then cook it.....sounds like a full day's work to me. 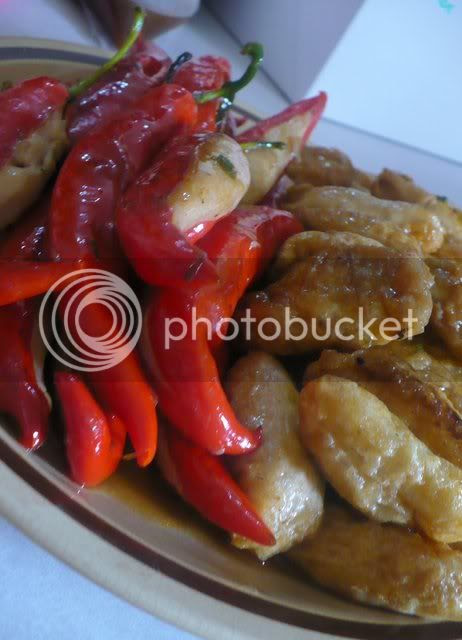 The fish paste was yummy and springy. I think I myself whacked three or four of those stuffed chillies. My favourite. My least favourite is White Tau Foo, which I'm glad wasn't there.

And here we have the legendary roast pork. This dish takes two days to prepare, coz it requires dehydrating the skin in the fridge. Through some marvel of nature, the skin was dehydrated while the meat remained soft and moist. Definitely a must try recipe from the same bought that I also purchased. 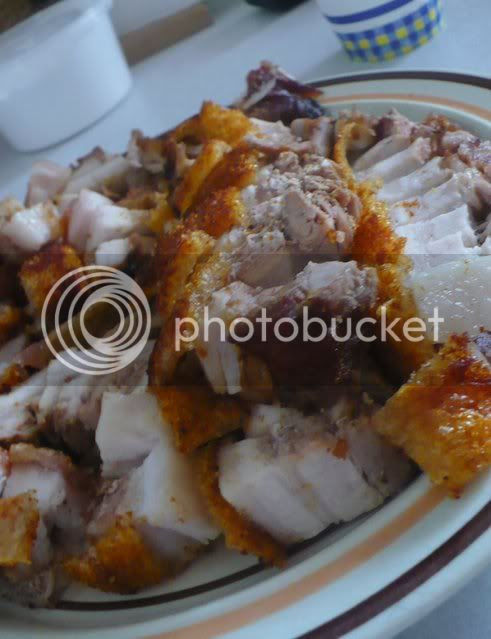 White Tau Foo, not exactly my favourite, but the garnishing was yummy. 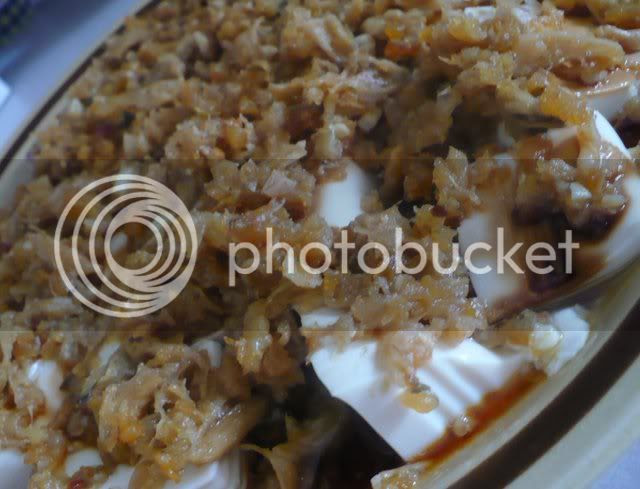 The delectable cream puffs, that seem perky and puffy as......a robin in spring?... well,yeah, filled with a tangy lemon cream, brought by the Just Heavenly Pleasures Boys. There's something indescribably pleasurable in sinking your teeth to something that oozes out glorious thick cream. I think hence the appeal of the classic cream puff and eclair. 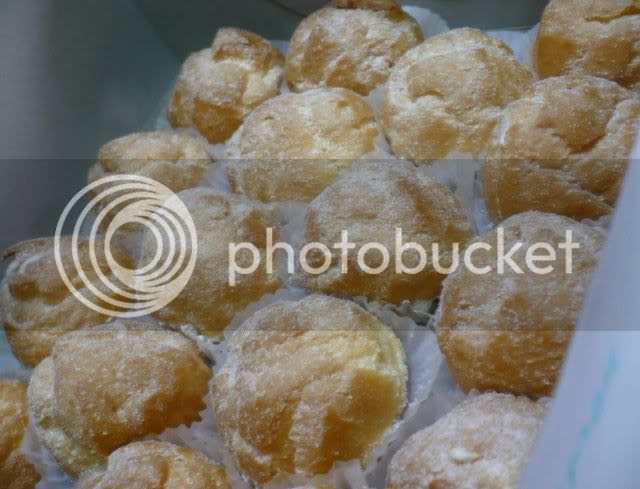 Obviously I am not describing the food in chronological order as it was consumed. This stir fried veggie is like a woman with makeup screaming out to be photographed. The colors just look so natural, (unlike the aforementioned woman), like a flower garden in Cameron Highlands. 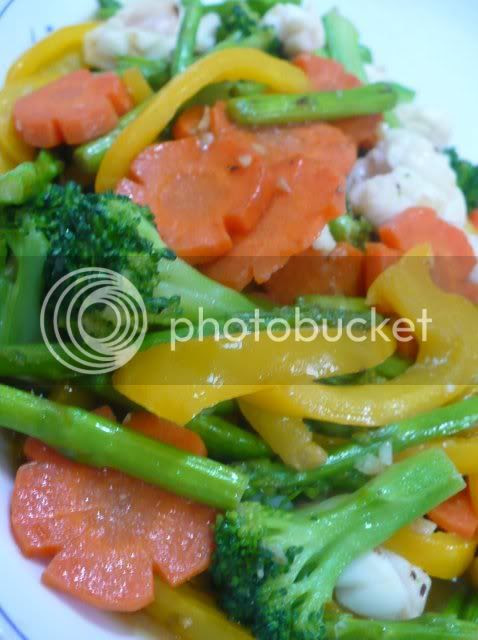 I think Nipples brought the roast duck....the meat was tender and succulent, no complaints there. But since its not homemade (in Pea's home anyway) we shall not dwell on it. 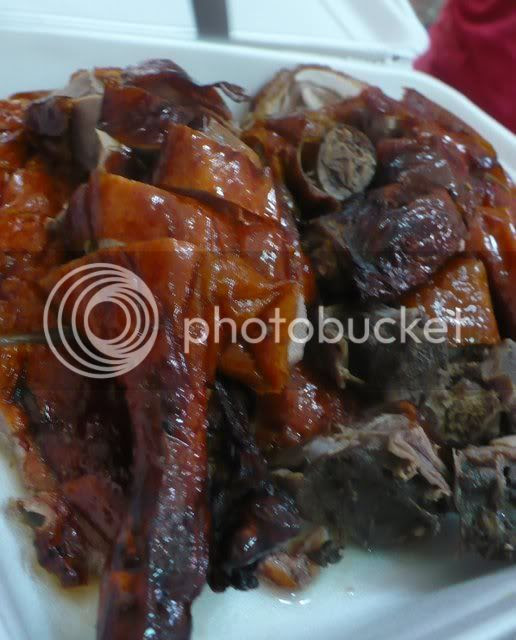 The curry chicken was also made by Precious Pea. What an amazing hostess. I thought it was superb, spicy enough, but without searing your tongue. Thick rich coconut gravy, in keeping with the theme of decadence on a Monday afternoon. Oh, it was a public holiday in celebration of Gautama Siddharta's birthday. (and I think death and englightenment all rolled into one) 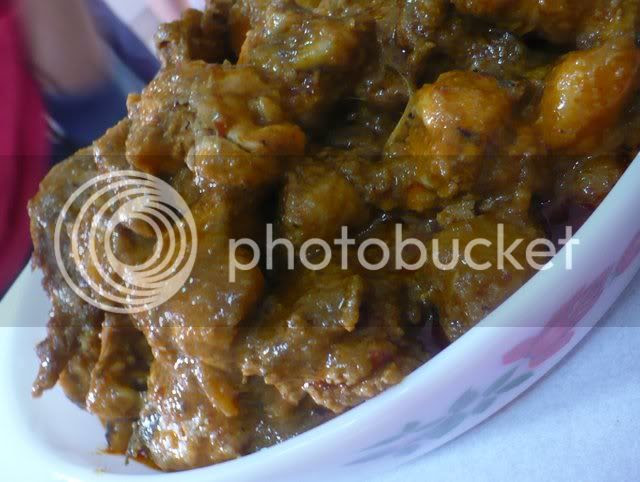 Mr Pea's legendary vinegared pork trotters, that spawned Tolkien length threads on Facebook. As someone announced that it was for confinement, (confinement refers to the period after a woman gives birth, where she's supposed to eat certain things and not eat certain things. Gingered items are good because it expels gas), I declared I was expecting my 5th. I should declare here that I meant 5th helping....not 5th child. 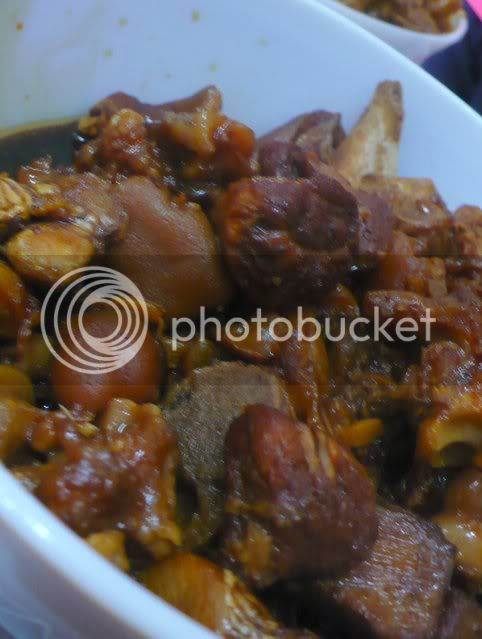 The other desserts contributed by JHP Boys was a freshly baked yorkshire pudding with icing sugar and honey, AND a wonderfully wobbly wine jelly. The wobble in the jelly was perfect. Not too wobbly as to be sagging, taut enough to render a wonderful texture, yet, not hard and crunchy like agar agar. The trick apparently is to use gelatine. Having suffered a minor hangover from a champagne tea the day before, I didn't dare risk imbibing too much solidified wine. 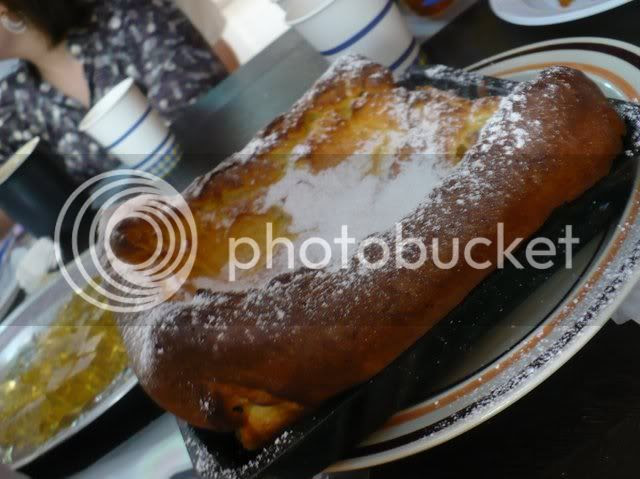 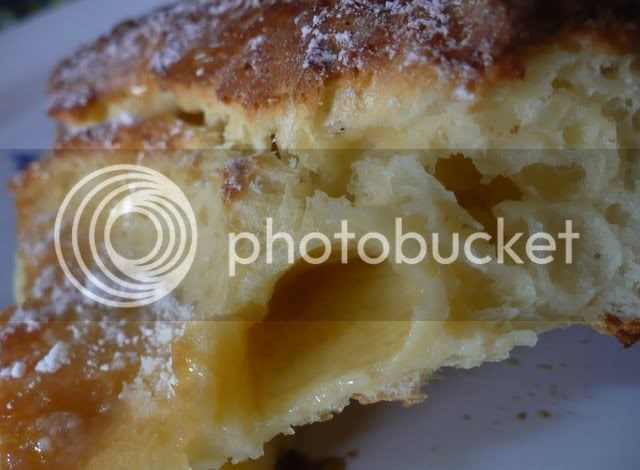 On the social side, the company was great. Nipples, on no less than two ocassions, put his foot in his mouth BIG TIME. The first was a statement implying that the baker boys weren't yet FAMOUS, (GASP!!! Nipples, JHP boys have between them 1500 ppl or more, on their facebook), and the other statement disparaging a certain group of people, who were certainly present in the room.

Making a rather inaugural (well, for me anyway it was inaugural) appearance was the recently titled Hairy Berry.

Conversations ranged from neutering of dogs to how to stimulate them. Lemongrass gave a very naughty giggle as she watched in wonderment at the little doggy's urm.... woody. And blatantly in front of Bald Eagle too. There was also the inevitable conversation about the two Davids showdown in American Idol. As this is written, the results are already out, but I have been warned severely not to make any hint at the results. I find it hard to believe in this day and age, such things can be kept secret, when even something as secret as the brokering of judges in the judiciary cannot be kept secret. 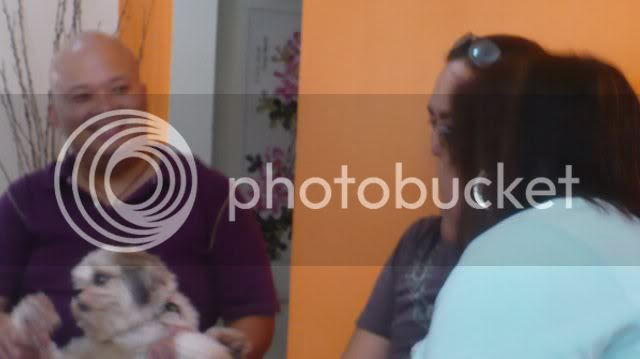 This is one of those mystery shots. Why was he sitting with the laptop facing away from him? Maybe he's so accustomed to modelling for products, he thought he was doing an endorsement shoot for dell, or whatever brand it was. 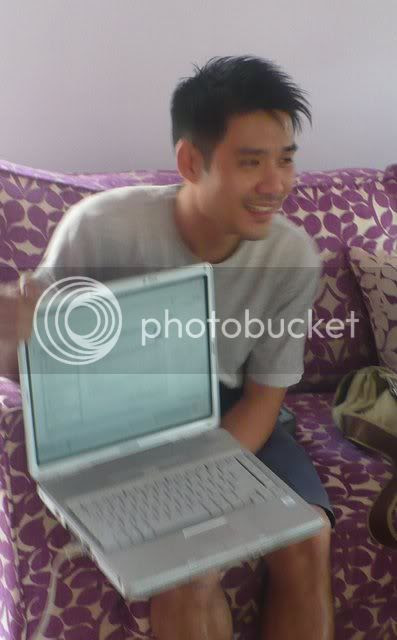 If there was one shortcoming about the whole event, it was that the hostess didnt entertain us on the koo chng WHILE we were eating. She could have created a totally Xin ambience by playing this wonderful classical chinese instrument as we ate. 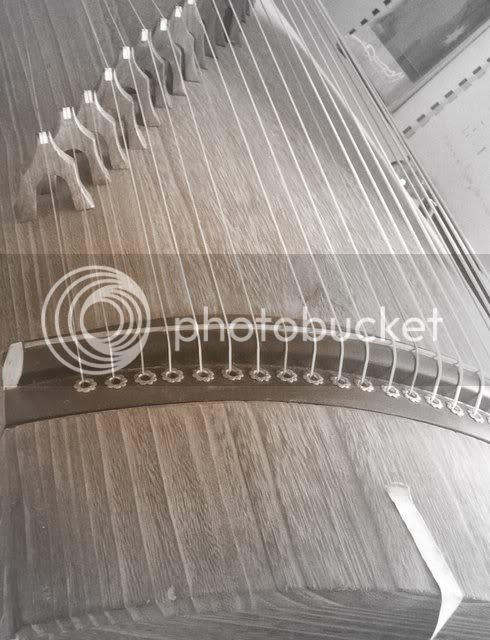 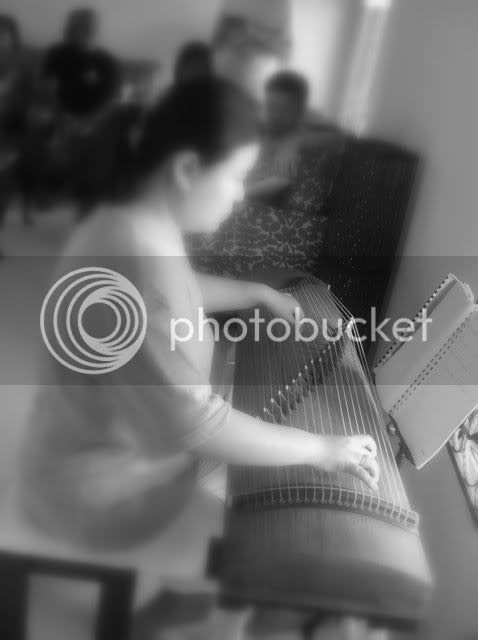 It was a fabulous lunch, thank you so very much Precious Pea and Mr Precious Pea. We...well, I, hope to be invited again for the glorious spread very soon.
Posted by fatboybakes at 11:51 AM

Oh...now is the hairy berry the same one that's going on, on the latest ultra long facebook thread? I shall help your readers solve the mystery. I was patiently waiting for Mr. Pea to type in his password. It's a common IT folk thingy, we do tend to memorise keystrokes. So to avoid any untoward incidents, I turned the Keyboard away from me so as not to steal furtive glances at Mr. Pea while he was typing in his password.

Glad to know you enjoyed the lunch as much as I enjoyed hosting it. Definitely will be more in the future, after I learn more dishes. Hehehe..you certainly wouldn't want to have the same dishes again rite?

Err..one correction, the fish paste was done under supervision of my mother in law. It was a 'virgin' attempt although it was splattered all over the floor. But don't worry, the floor was clean.

Hey...how did my precious pea ended on Nigel's lap?? Aikss..was he stimulating my dog at that time????!!!

ah, the wine jelly! fantastic, wasn't it? and the roast pork, and the pork trotters. and of course, the jokes. hey, u should have mentioned yr fabulous cake too. oh, well, it will be in my post. watch out for that this summer! haha.

and nice meeting you as well. am deeply honoured by that shot. in fact, i thought of editing it abit and use it as the background for my headline. can?

aiyoh..youth nowadays was warned personally by mrs pea not to come 1pm sharp mah...so what to do..leave klang at 1pm sharp lor..

wat to do..i think i like the taste of my feet larr...

hairyberry, opcors, go ahead and use the shot. i cant possibly blog about my own cake, can i!

precious pea, no need to learn new dishes, just replicate everything again oso i like.

unkaleong, ah, its like blind people who can tell what number is being dialled by the tones from each key hor. very terror....

oh nipples, so i wasnt hearing things..the duck was from klang and it was from you. thanks for the yummy duck. hope it was nowhere near your feet.

Only the Legendary F.B.B. (macam the Notorious B.I.G., only not, you know, dead) can segue from our fabulousest foodblogger (almost Nigellaean in her brimming and beausome bosoms) and her fetish with doggie ding-dongs to the War of the Two Davids and link that with the state (or statelessness, rather) of our fine judiciary today.

Me, I still can't get over that siu yoke and chicken curry. Decadent I tell yew... *drools in memory*

gosh, and only the highly articulate and eloquent kenny mah can cause me to actually check the dictionary for a meaning of a word. SEGUE. (wow, actually pronounced seg way)what a cool word. i cant wait to use it now. i'm craving for some sour vinegar gravy.

Just as well we sauntered in the last. You guys were like vultures surrounding the food. I thought can start eating immediately, but NOOOoooo you were still photographing everything. How rude.

(But my apologies to the multitalented hostess who did an amazing job with the cooking and the massaging of the dog's..ahem)

Mmmm.. we love yorkies smothered in honey for breakfast. Sooo easy to make and the way it blooms magnificently in the oven.. like magic liddat! And wonder of wonders, it's one of those rare dishes that still tastes marvellous despite the huge deflation.

I miss siew ngap so much now that it hurts... :(
Is the Sunrise duck still good ar?

kat, haha, yup, it does taste good even after deflation...