Launch Of My Nourishment Magazine

Some of you may vaguely remember that I was supposed to be involved in a new food magazine. However, due to some miscommunication, and probably also they had enough contributors, I was NOT involved in the first issue..... but nevertheless, was rather pleased to know that it did come to fruition, and is now readily available at quite a number of F&B outlets. 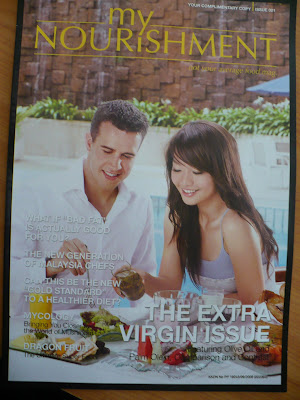 Anyway, last Thursday, I get a call from a rather excited Chief Editor, and Chef, Ryan Khang, who tells me, "Hey, what would a food magazine launch be without the presence of that very important group of people, the FOOD BLOGGERS?" and tells me to invite some "famous food bloggers". Of course, fame is very subjective. In my mind, the famous ones are those that I read, and who are my personal friends. So beware, this kind of vague instruction could very well lead to a nepharious form of flogger cronyism.

On my list of invitees who could make it, were of course, Boolicious of Masak Masak, the hawt hawt Ciki of Cumi & Ciki, (and Cumi), Babe in the City KL, Nipple Joe of Lots of Craving....together with the last minute stand ups, heh heh, Jackson Kah and Jules, who were both down with a cold, Paprika who had a family obligation, and those that couldn't make it anyway, due to their hectic social schedules, Nigel & Allan, and AWOL (A WHIFF OF LEMONGRASS). But yeah, in an ideal world, that would have been my more or less complete list of of Food Bloggers. Oh, I forgot Precious Pea too, who is perpetually packing and unpacking, from her staggering list of holidays on Air Asia. Datuk Tony Fernandez should give this woman a permanent seat.

The event was at Nikko Hotel. The carpark is a nightmare....cars going in and going out meet at a deadlock right after the entry barrier gate, and while the turn to the lower basement is like 20 feet away, it takes 10 minutes to get there, coz of the back to back traffic of cars exiting.

I digress. The editorial team was there, dressed up to the nines. No wonder the guy on the cover of the magazine looked familiar, coz it was Francois Loubet, the handsome french chef who teaches in Taylor's College. Other culinary luminaries were there too, such as the president of the Malaysian Chef's Association, I forget his name. Julie Wong, Boolicious' boss, of Flavours Magazine, with Jean Michel, from HTC, French Culinary School, the authoress of Fruitastic, etc etc and so forth.

Babe & hubby were already there when I arrived, and we were digging into the homemade dips prepared by Chef Francis Lim, whose class I attended in Cooking House once. The dips were excellent, ......much better than the hotel food that was served later on. But, we weren't there for the food, but for the glorious company of food bloggers. 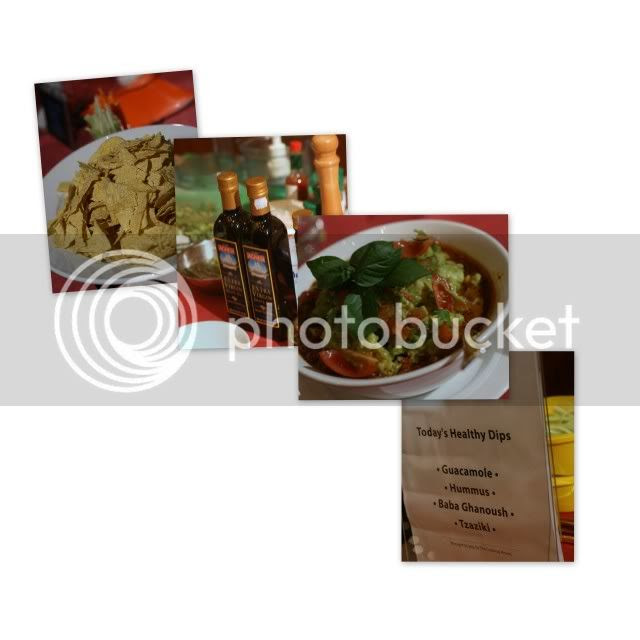 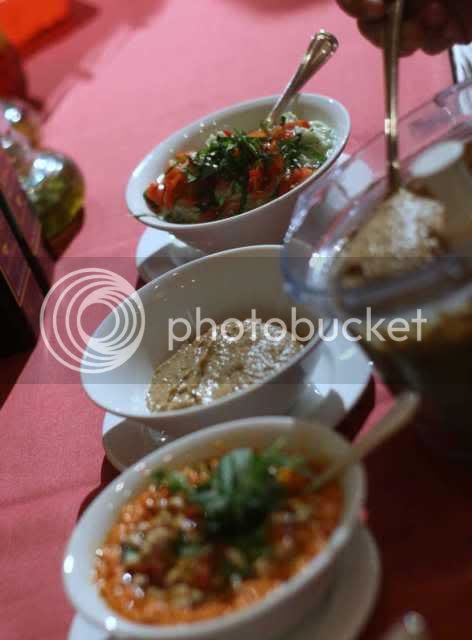 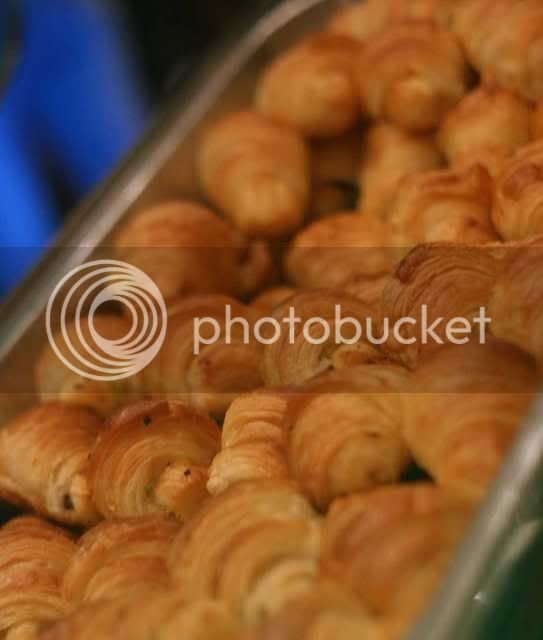 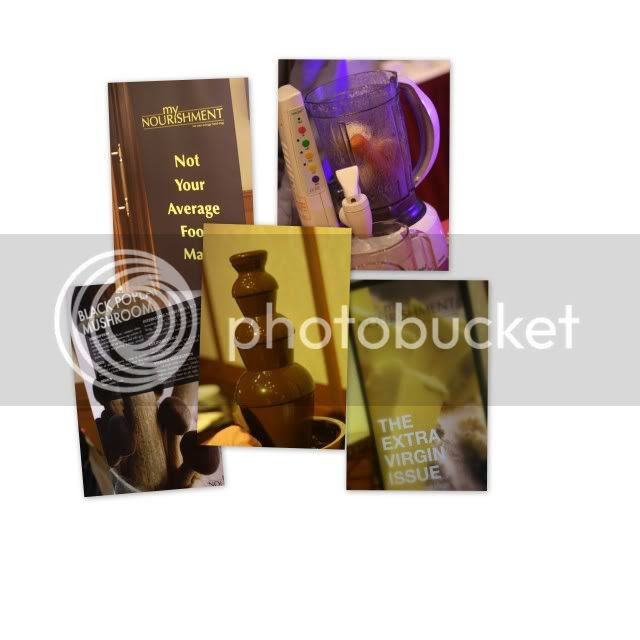 One of the interesting items on display was that super blender that blends juices to a fine pulp, so that nothing is wasted. I had copious amounts of fresh fruit juice that night. How very healthy. Alas, they ran out of champagne too quickly, and Nipples, Ciki and me were foraging desperately for another glass of bubbly. Red wine was giving me a headache. 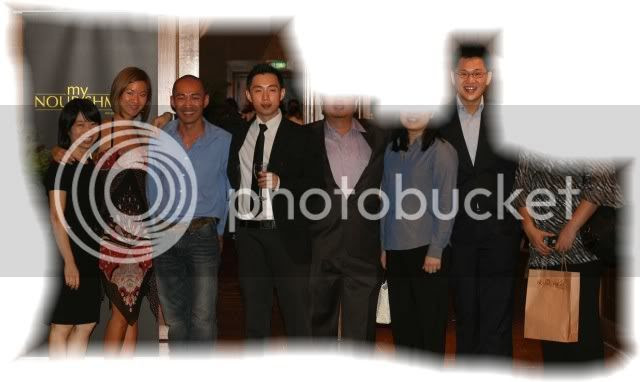 I LOVE chatting with Jean Michel, and his French Malaysian accent. Very funny chap. We look forward to sampling his cuisine at Cuisine Studio, Tropicana when he's back from his travels on 3rd December. He actually invited us over to go and eat there before he went overseas, but alas, I couldn't make it. 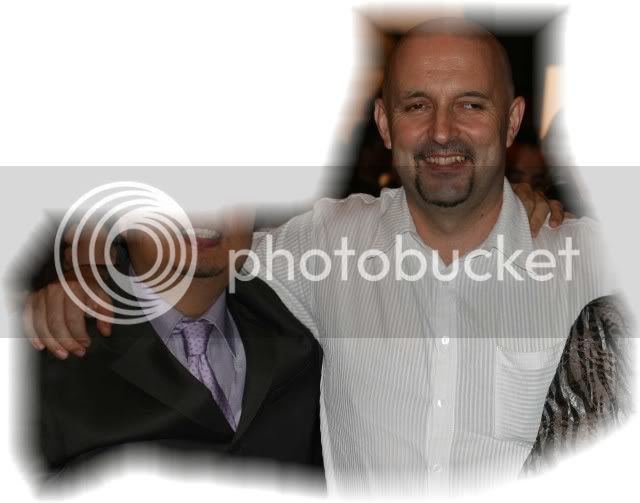 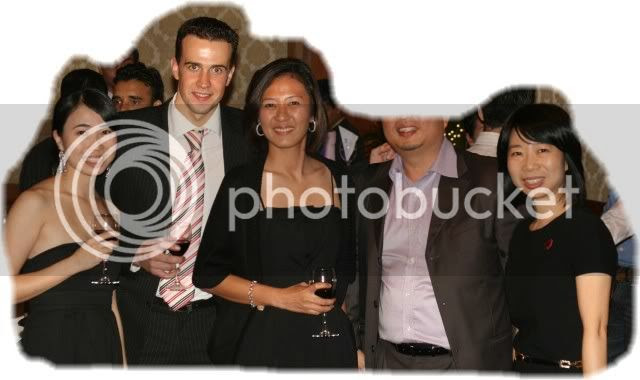 Well, although there was a fairly big crowd, us floggers I think had a fairly good time.

Big thanks to the Editorial team and Ryan for a wonderful time.
Posted by fatboybakes at 9:36 AM

You guys certainly look plenty posh! And inspired me to go out and get me a new (fitted) suit but quick! Now, I wonder if Ermenegildo Zegna is having a sale... :p

woah, all the glitz and glamour...so nice!

and cant wait to get a hold of the new mag in town. with a title like "the extra virgin issue", i'm hoping it's a playboy for foodies..awesome...

if so, does that make fbb hugh hefner ar? hehehe....

Congrats! Such a posh and lavish party *envy envy*! Would certainly like to get hold of a copy of this mag!

Thanks for the invite ;-) I'm really honoured to be placed in your book of fame hahaha...

Aiyoh and I really blushed when Ryan went round introducing... come and meet the famous food bloggers :p I also overheard him telling his guests that he have a group of famous bloggers at the launch.

Ryan, if you're reading this... I'm truly honoured and thank you. Looking forward to more classes at The Cooking House

thanks for the invite..finally could take out the coat..and realised it was already abit on the "tight" side..

Wow what a luminous cast of the Malaysian flogging community! Very nice! Do us proud!

550ml, yes, i was very blessed to be with the flogging luminaries...and am very honored they took time off to come.

nipples, you looked very dashing, hardly noticeable that the suit was on the tight side.

babe, but you all ARE famous what. no need to be shy. very honored that you could make it.

ah pure glutton, the fish is back. yeah, ...i am sure subsequent issues will be even better.

LFB, of course names like zegna and ferragamo and boss will only appear in my dreams.

I thot hugh hefner is still alive and hanging around with bunnies who look disturbingly alike since umpteenth years ago??

Nowadays Middle Eastern is the in thing ah?

now that your post is up, i can post my "fill in the blanks" version... lazy, lazy!

why you chop off the heads like dat.. so brutal ler... haha

You look good in a suit. You should wear it more often.

C&C, haha, ... re the heads, some of these famous flers very shy, and as for myself, who is not so famous, i also very shy.

gfad, middle eastern? what? who? the dips? only hummus and tzakiki mah...guacamole is harddddly middle eastern.
hefner alive meh? hmm, must check.

wahh..thks so much for adding me to your sidebar ;o)
And I definitely will be getting a copy of this mag! Very err..creatively edited pics..

what a posh event. and I finally make my mark here. can I link you as well?

j2kfm, yalar, now only visit...have been visiting u long time oridi ma. link away.
too much work to blur faces.... heh heh...

Ahh...didn't know u missed the fish, hehe! "Raynebow" is my other evil personality (hence the mask) - the NON-food part, haha!
I have linked u ages ago!

PG, ah so. have linked u oridi.... thanks for linking.

wah, show everybody's faces except yours.
Is that blender good for chilli and lemongrass too? Because I've been looking for one for a long time. I ended with 3 blenders and they do not do a good job! Will see u in Melb. next year. Email when time is closer.

Hi there, do you have any idea where can i get delicious Birthday cake? Urgent.

From toilet humour (in the last post) to a sophisticated soiree, you've got it all covered, FBB. ;D
From soiled underwear to nifty suits and pretty stripey ties. Man, you're a one-stop shop for varied tastes.

Why lah some folk got partially beheaded? They're very shy, are they?

myfoodsafari, i am not sure if that blender can do that but it should, by the sound of it.

argie, hahah, yes, some are very shy, hence the beheading. yes, varitey is the spice of life...