Did you know there's a difference between whisky without an E (whiskey), and Scotch refers to whisky produced from Scotland? Well, yeah, I knew the latter, common sense dictated that, but I didn't know a whiskey from a whisky.

When I got an invite to attend a single malt tasting, I was a bit apprehensive at first, coz if it was ANYTHING like WINE tasting, where people swirl the glasses, sniff the wine, gargle it in their throats, and rattle off a verbose list of unpronouncable french terms, like buckay, vintayje, etc. And since I am a pleb, who knocks back anything alcoholic (not those alcohol flavoured stuff like Watsons gin) basically (except tequila & gin, cos I o/d-ed on those in my youth), I thought, hmmm, would a single malt tasting be wasted on me? But I DO LOVE SINGLE MALTS, so I agreed, and in any case, it was a very small crowd of food bloggers that were invited. (before any of yall ask why I didn't invite you, it basically wasn't within my powers to do so, ....alas). Oh, did I mention we were told we'd get to taste a 30 year single malt???? Weep, people, weep.

The venue, Carcosa Seri Negara, no less. Fit for Kings and Queens, and who did I get to escort me? The QUEEN herself. Queen of the DSLR Realm, AWhiffofLemongrass aka Thamby. The woman was riddled with a flu bug, (not the swine variety I hope), and argh, riding in a aircond car with her was as good as sending out a gilded invite to the swarm of bacteria, "You are cordially invited to take up residence in my body"...

We were the first of 4 bloggers to arrive, and met our host, Marian Eu Hooi Khaw. We see her name in the papers all the time, so it's nice to finally put a face to the name. She's such a sweetie, and so very friendly.

Dinner was a buffet spread, ....as our main purpose there was to write about the Single Malt, I didn't really take note of the foods. It was decent enough, the duck confit wrapped in cabbage leaf was delicious, and so were the prawns at the salad bar. 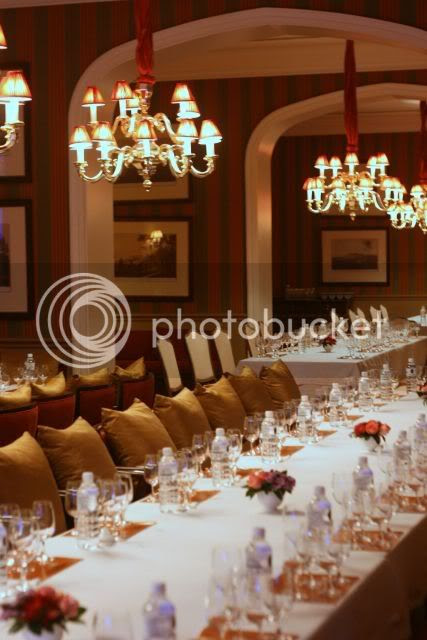 Although the dining room was all decked out, like a bride, we weren't allowed to eat there as they wanted the table settings untouched (like a bride) for the whisky tasting. 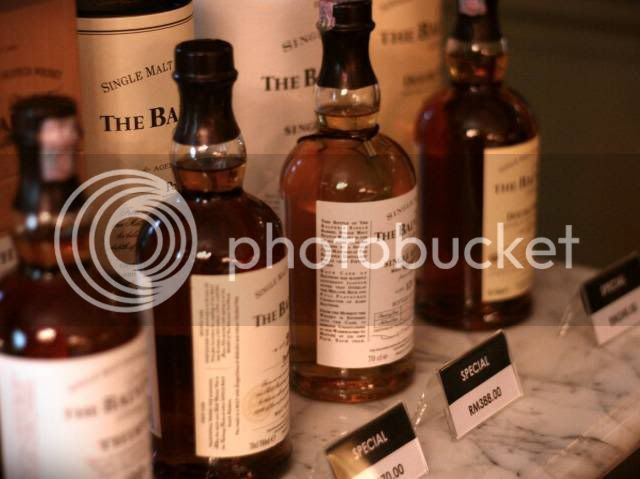 The bottles were priced at a special price.... 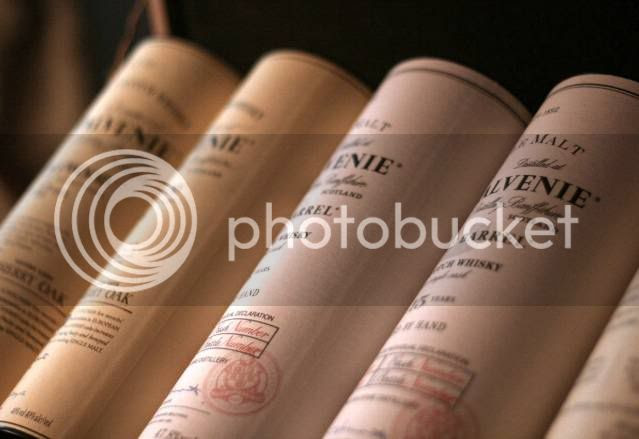 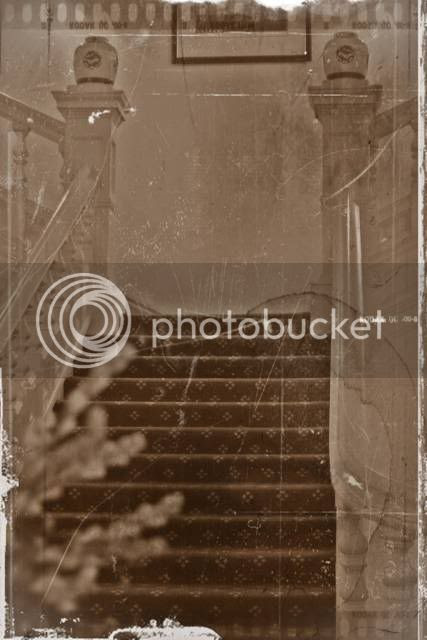 These stairs have had the privilege of being walked upon by Queen Elizabeth II herself...I think. 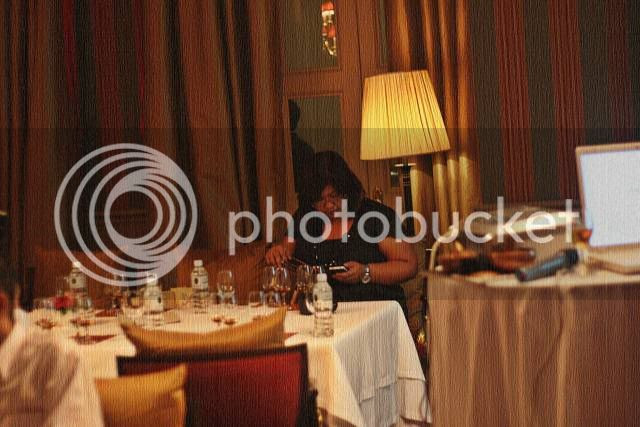 Her Majesty, Queen of the DSLR 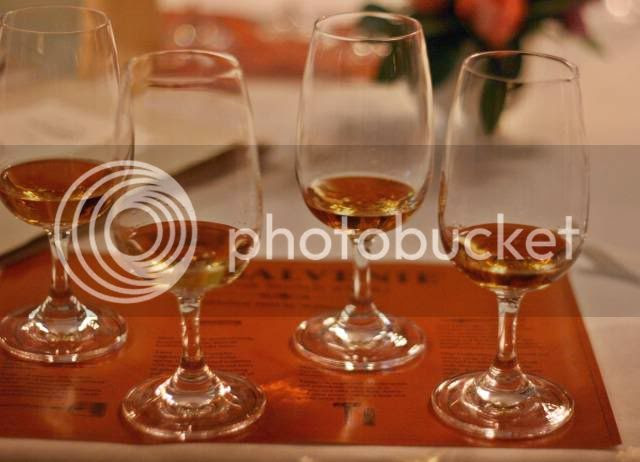 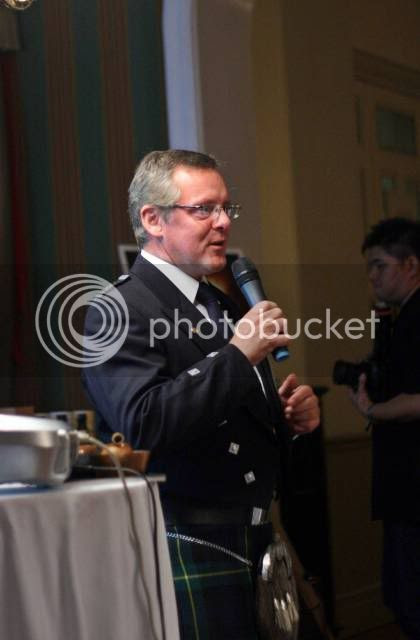 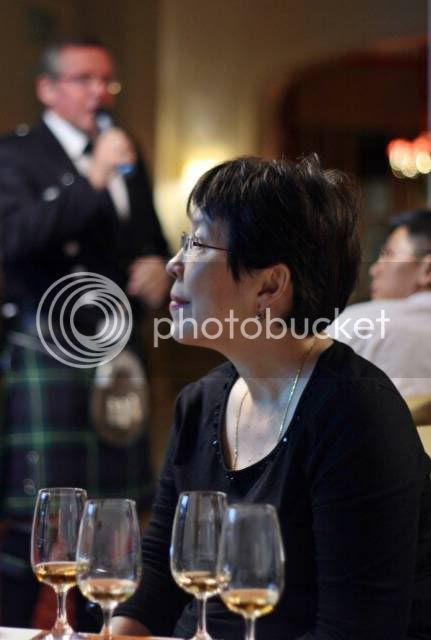 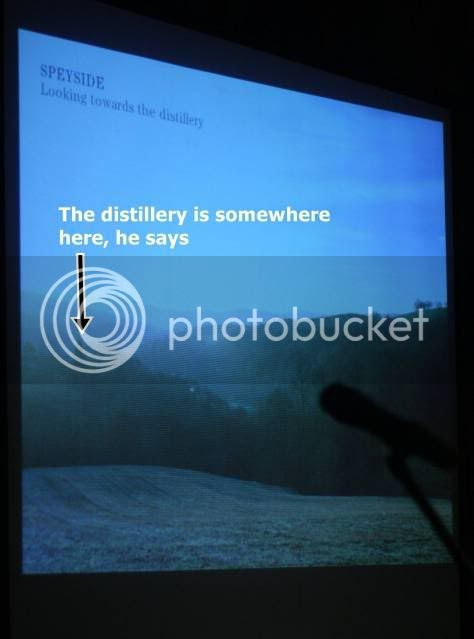 According to David, the distillery is somewhere here. (look at arrow) 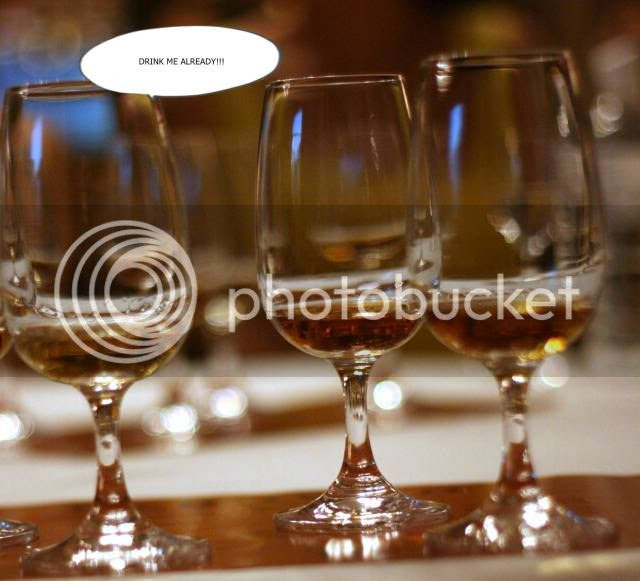 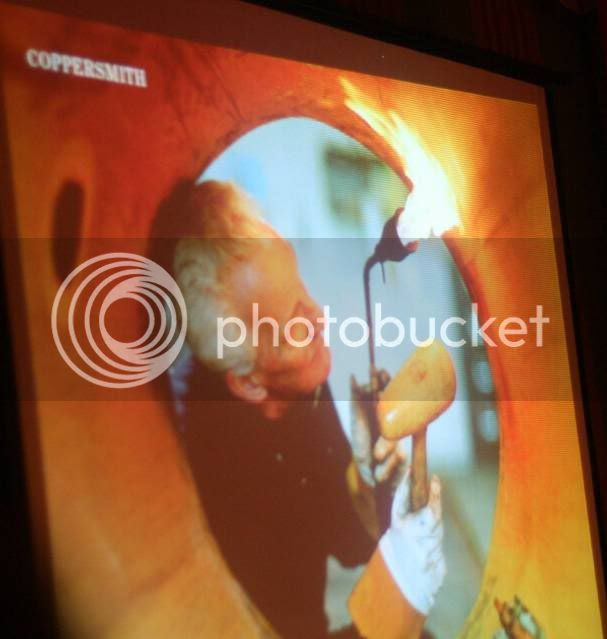 The only distillery to have their own inhouse coppersmith... 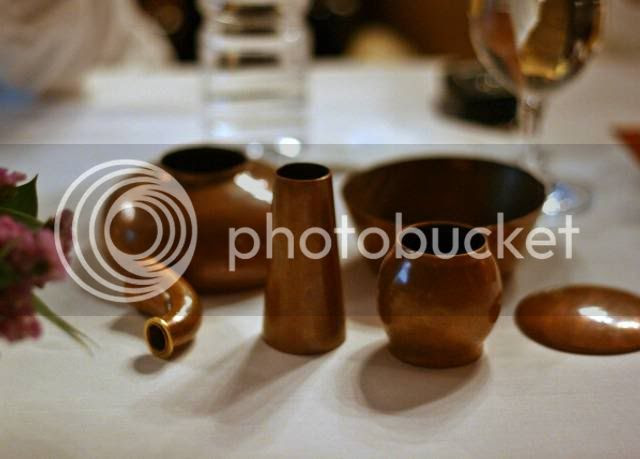 The miniature parts, exact replica, of the whisky stills.... 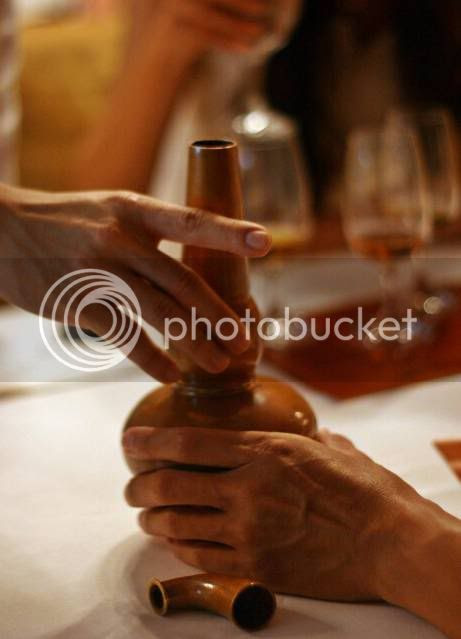 The hands of friendship meet over whisky... 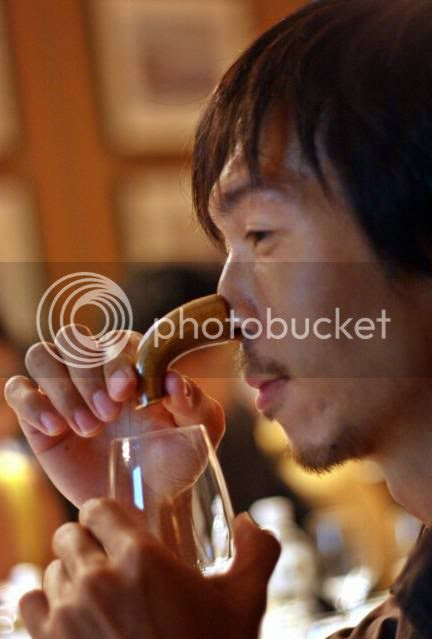 Wonder if its to suck in or blow out? Anyway, he's Chummy with Ciki...(get it?) 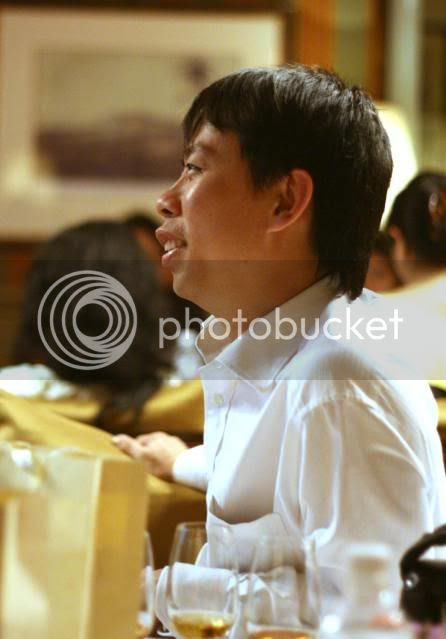 Famous Blogger, KY Speaks....nice meeting you KY!!!! It was an honor! 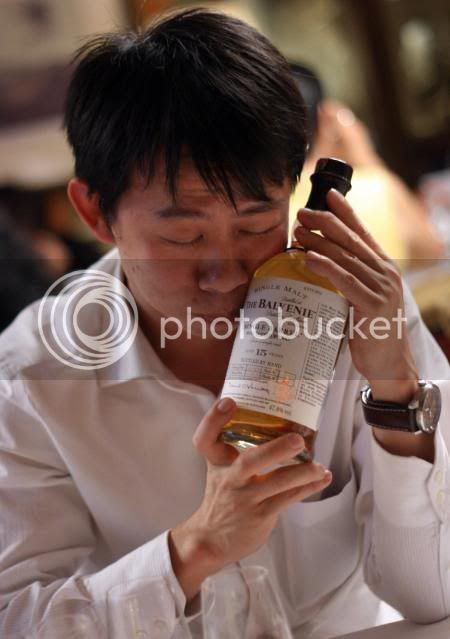 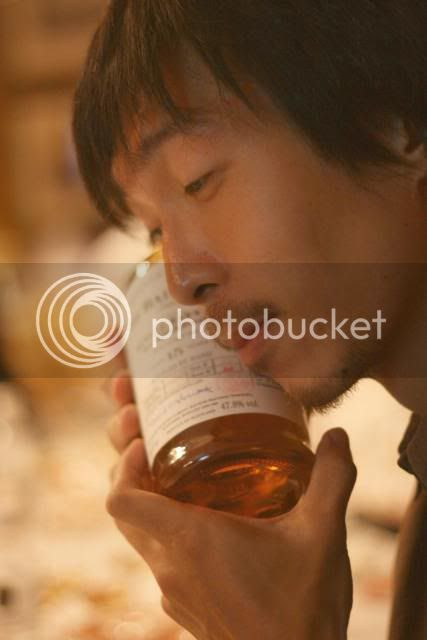 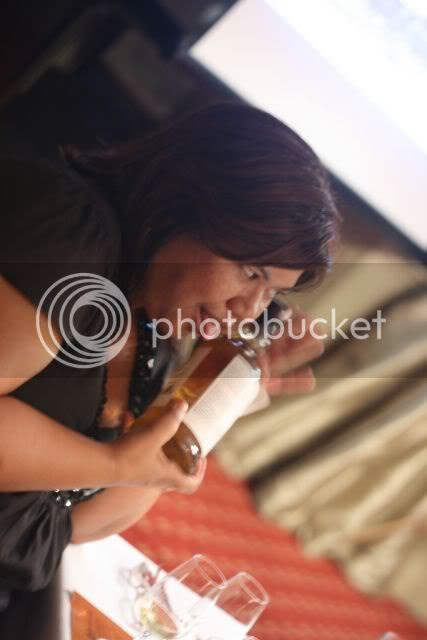 Lyrical Lemongrass has always prided herself on her tongue, which apparently can detect the taste of nearly anything...

Anyway, the 30 year old one, which costs in excess of RM2 k a bottle, is indeed fine stuff. Smooth, and oh so very palatable. It has a wonderful fragrance, mellow okay tones and hints of candied orange peel.

The 21 year old is also great, and to quote their words, refined with remarkable character, it is creamy and silky with fruit, honey and spice notes.

The 15 yr is actually better with water, apparently, but this was the least favourite one, perhaps because I gulped it down BEFORE David said to add some water.

The 12 year is a fine drink, and very drinkable. Funny, someone said that although when you taste the whiskies, obviously it gets better with age, but after you've tried the 30 yr, surprisingly when you go back to the 12, it is PERFECTLY drinkable.
It was a great night out. Thanks Marian, and you know who you are, for organising this!
Posted by fatboybakes at 9:48 AM

ROFL. hilarious:p Why didn't u save some for me?!

I was wondering why thamby was let off with such an innocuous photo. That was before I scrolled down to the last picture...

I didn't know in whisky tasting you can use such glasses. Learn something new everyday.

How did you get the old-and-crumpled-B&W photo effect ah?

So what is the diff between whisky and whiskey?

Magnifique!! Wow you even met THE KY! Ah, the usual suspects :-) Heh heh, Lemongrass and her TONGUE!!!

I love the last 2 pics! Especially the way Cumi holds and caresses the bottle... =P

wah, even flu-ridden her powder-ful tongue can taste all the subtle flavours...;p

Err so what's a whisky from a whiskey?

Oh by the way, I 'borrowed' a couple of your droolsworthy pix for my most recent post. U don't mind-hor? *batting almost non-existent eyelashes*

Hi again. Fyi, I just got enlightened on the 'e' at Her Lusciousness.

where's your photo holding the bottle??? I saw you in lyrical lemongrass's blog...
wow... satisfy your tastebud for alcohol... of course it was a great night out!

I nearly choked on my food reading your blog lah. Hilarious! Ah, you really cheered me up. If only men can understand that a good woman is like a good single malt whiskey hor? We are definitely more desirable once we hit our 30's. :-)

Did you manage to sneak some out in a flask for me?

Such a cool event - great tasting whisky, good friends and yummy food. So where's our flask of whisky?

Her Majesty, Queen of the DSLR told me about this event last week. so funny!!!

fbb, i got one question la. no worries, it's not like those why 4 but not 5 eggs ones..hehe..can whiskey be used in baking cakes ar? i mean, like a buttercake?

hairy berry, greetings from perth. why on earth would you wanna put whisky in a buttercake? i am sure there's no harm trying though. prob quite nice.

boolicious, hahah, i FORGOT my hip flask, as usually its for smuggling booze INTO an establishment, not OUT.

paps, a woman like you would remain desirable forever one la...

thule, aiyo, fren, i never put my own pic in my blog ma. i very shy person.

TNG, the woman's tongue is apparently like no other. i'll be dedicating a post to that part of her anatomy soon i think.

jules, yeah, got to meet THE KY

GFAD, all the pics of thamby are nice ma....chis. the effect is from photoscape.

ciki, i'd have expected that to be de job of chummy.

IS there any Double Malt? LOL.

RM2k is cheap. I think the spot price for 30 year old whisky is on the other side of 1000 sterling pounds.

fbb, looks like meet the queen experience of a lifetime, no queen but balvenie tho. Now I got it cumi is cumi and ciki is ciki. Always thot cumi sound purr catty lady and ciki is the nimble monkey. Sorry ciki !!

Aiks aiks. I just came back from Scotland but I have no idea what whiskies I had... was good though! :P

So nice, so nice. That will really have you feeling good.

It must have been quite a sober official night at the Palace , with Her Ladyships , the Lord Balvanie and some hip youngsters at hand , but no loose bar tapping princesses and noise , befitting no doubt His Lordships's impeccable pedigree & the awestruck audience
lol !

BSG, hahah, actually, it wasnt a starchy event at all, surprisingly.

duo dishes, it was a lovely evening.

LFB, chis, i hate you, you lucky sod.

jencooks, heh heh, now you know who's who la hor.

henry, maybe i got the price wrong....but it was on a special offer that day.

Have we mentioned that you eat well? Very well. :)