Chile, to hear how its said, click HERE. Although phonetically, it seems to be spelt as chill lee, actually its more like how a Singaporean would say, chill. ie, Chill Leh....

Fascinating doesn't even begin to describe this country. 4300 km long, (vs our little peninsula here which is 740km from north to south...lets see, that's around 6 times longer! Wow, talk about length!), probably stretching over several climate types, thus having the best of all worlds, sea, snow, desert even, (the world's driest desert is in Chile, for those of you who failed your geography), the ATACAMA desert. Fortunately, this was not a geography lesson or a test, but a chance to savour the culinary delights of this wonderful country. With such diverse range in climate, they probably have everything from durian to penguins.

It was a lovely evening soiree, at the Westin Kuala Lumpur, hosted by ProChile and the Embassy of Chile in Malaysia. ProChile(Chilean Export Promotion Bureau) is a trade delegation of 15 Chilean firms which hopes to establish business relations with Malaysian companies. The video presentation, which was short and sweet, tantalized our mental palates, and really puts Chile on the list of MUST GO TO destinations. Hopefully air travel between here and there will be be more affordable. 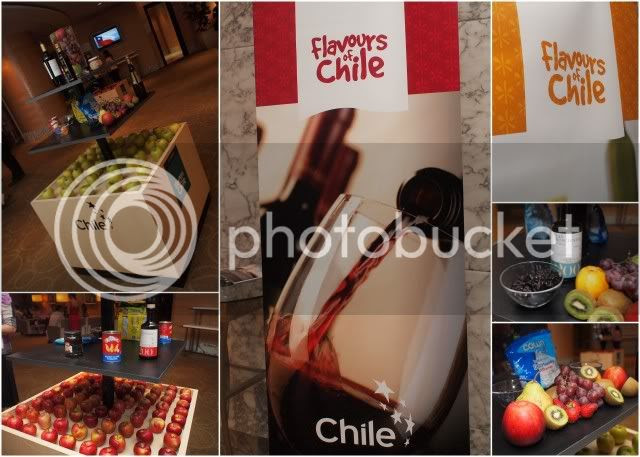 While waiting for dinner, we mingled around and sipped a lovely cocktail that tasted like a fizzy margarita, very lethal. 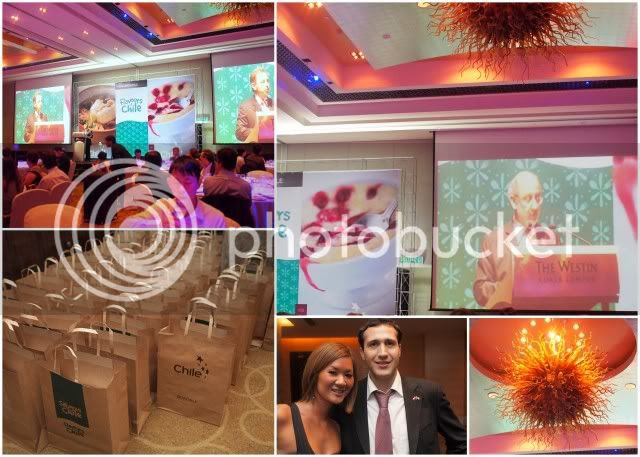 We were all seated amongst familiar faces in the media table.

While texting on the phone with a friend, he asked me, so, what is the national dish of Chile? Judging by the way the women on the table were going ga-ga when he appeared on screen, I'd say the national dish is Chilean Chef Carlo von Mühlenbrock . 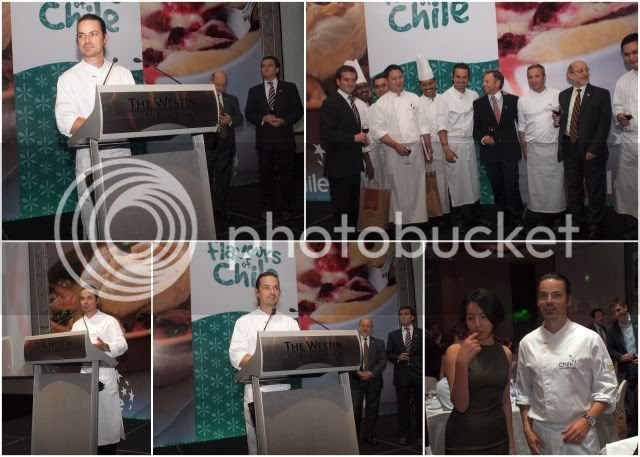 Ruggedly handsome, some described him as a cross between Antonio Banderas and Johnny Depp. His screen persona was riveting, as he explained to us in that exotic Chilean accent the dishes that were being prepared for the night. 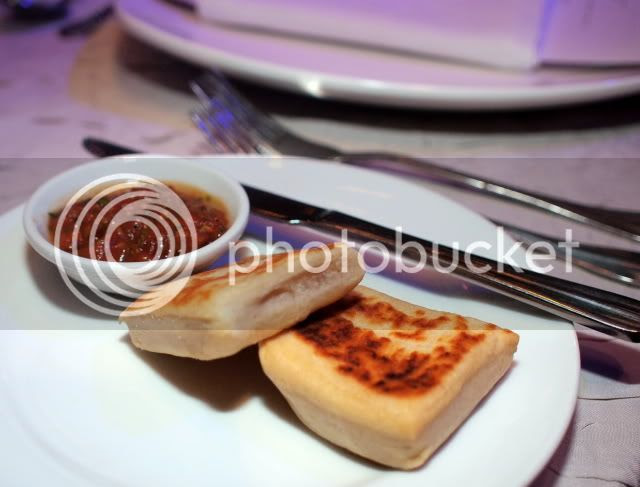 For starters, we had cheese turnover with merken seasoning, sopaipillas with Chilean avocado dip and Chilean croaker and clam tartare. Anticipating many other culinary delights to come, we didn't want to fill ourselves with carbo, although this oven baked tortilla bread with Chilean tomato dip was absolutely delicious. (pic above). 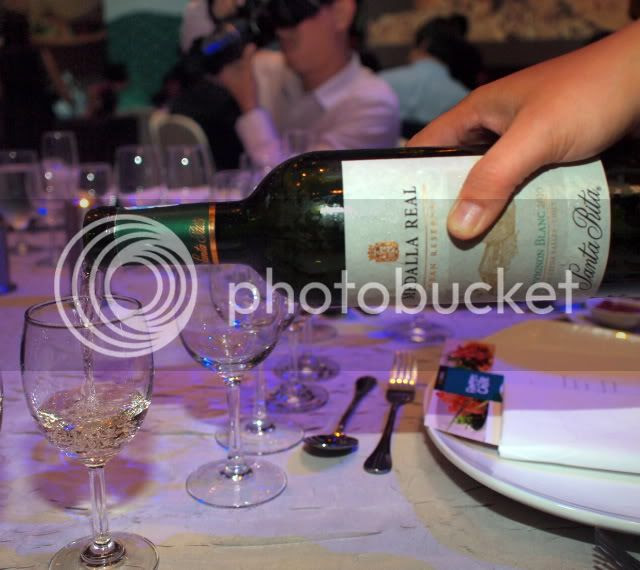 Nothing like a good buz from a Vina Santa Carolina Savignon Blanc. Crisp and refreshing, and totally suitable with the next course. 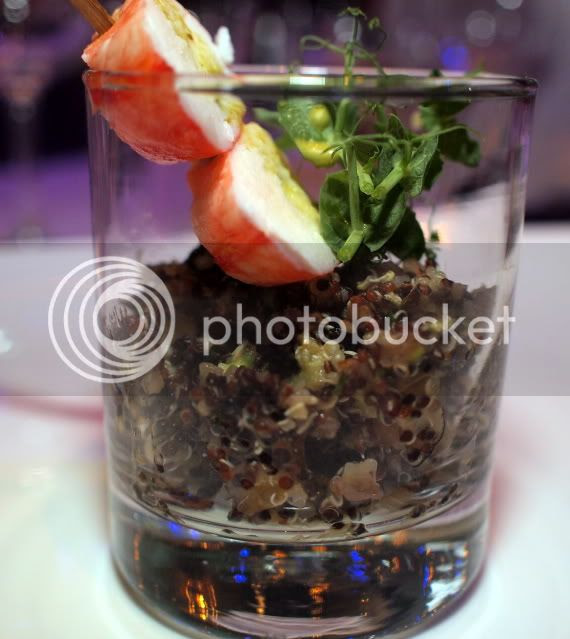 Quinoa Timbale with avocado and Chilean King Crab. I told you, they have all KINDS of produce! The king crab was sweet and succulent, similar to the alaskan and hokkaido king crab, and from equally cold waters I'm sure. The crunch from the quinoa, the tangy sauce, the chewiness of the crab was a real treat to the senses. 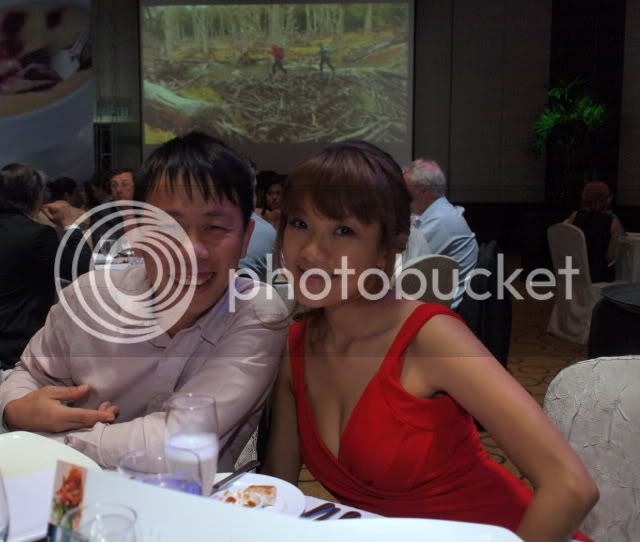 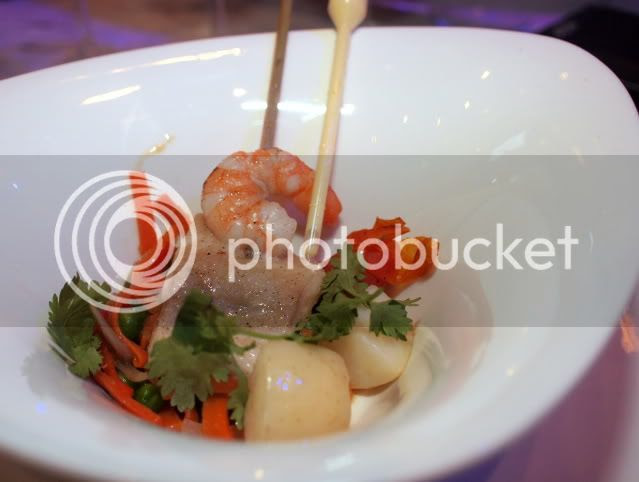 Pablo Neruda's Conger Eel Chowder. I don;t know what I feel about eel, generally, but this eel, wow! Tastes like scallop. And the chowder, a clear broth, together with the seafood in the bowl, was simply sublime. There was a wholesome heartiness about this dish, and considering it was a banquet hall, great care had been taken to ensure none of the seafood was overcooked etc.

The term Conger eel suddenly reminds me of the song, CONGA....
Come on, shake your body baby,do the Conger
I know you can't control yourself any longer 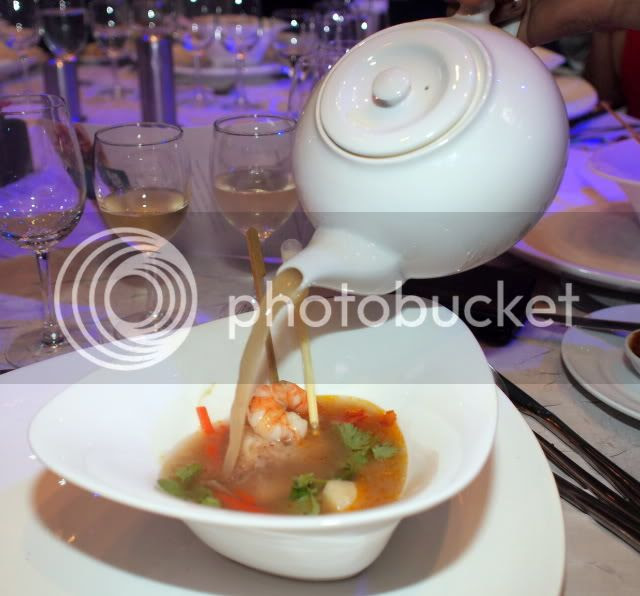 Now, what sets HER apart from your regular bloggers who blind their fellow diners with the flashes, and keep the table waiting while every dish is photographed, is this girl SKETCHES all the pictures of her food! How remarkable is that! 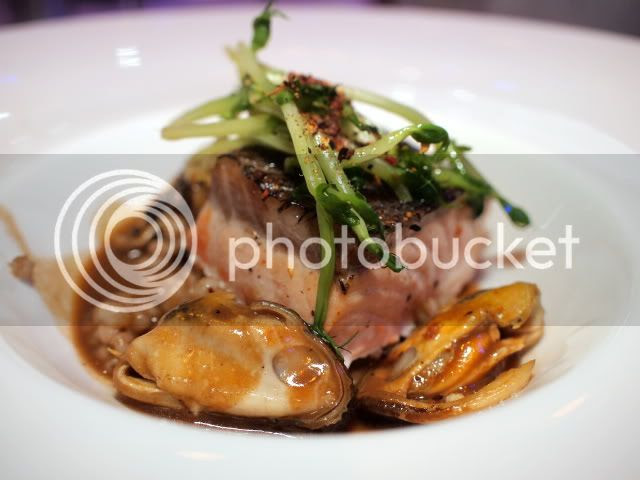 Smoked Salmon & mussels with coriander spiced barley. Again, I am not a fan of cooked salmon, but this was done to perfection, and honestly, hats off to the Westin crew for being able to pull this off on such a large scale. A slight local twist with our local beansprouts as a garnish. The mussels were fresh, and juicy. The fish was served with a Vina Cono Sur Pinot Noir. 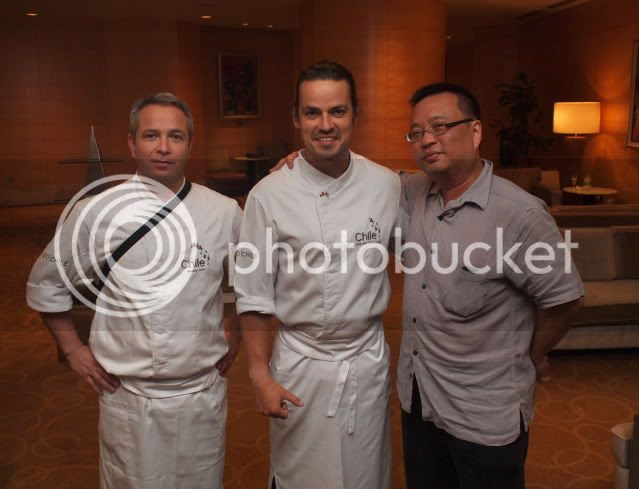 I guess there is no shame in taking pictures with celebrities.


For dessert, southern Chile berries sorbet with fresh fruit, a most refreshing end to a lovely meal. The tangy sorbet with those two biscuits that look like macarons, but are not. 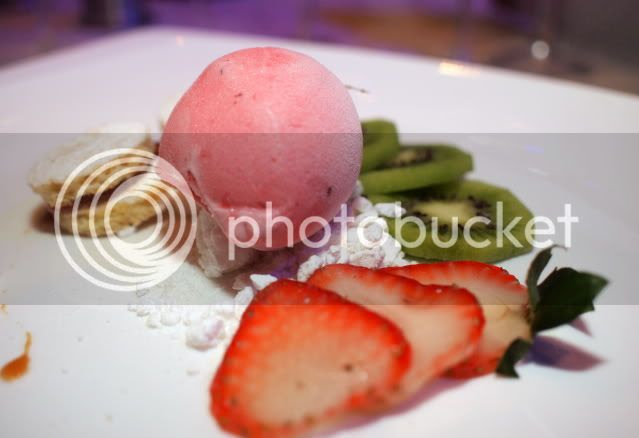 Not all men are created equal, some got their desserts with that crown of caramelized sugar threads. 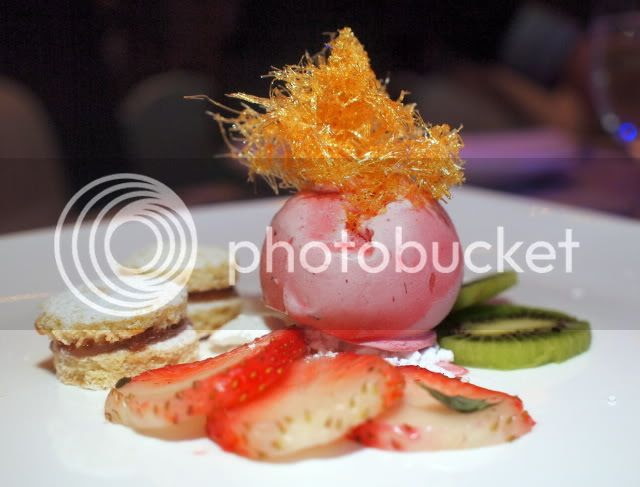 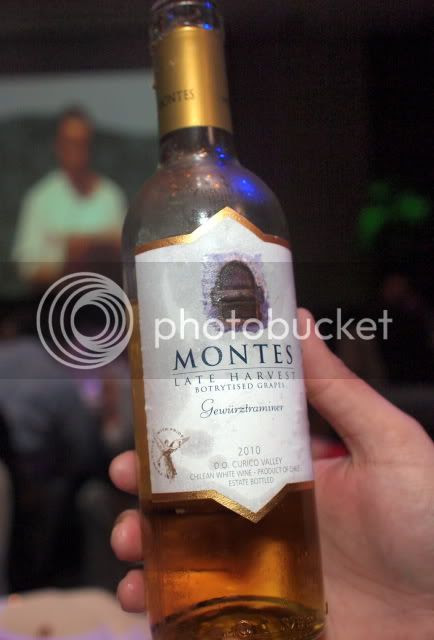 With the dessert, a dessert wine called Late Harvest. 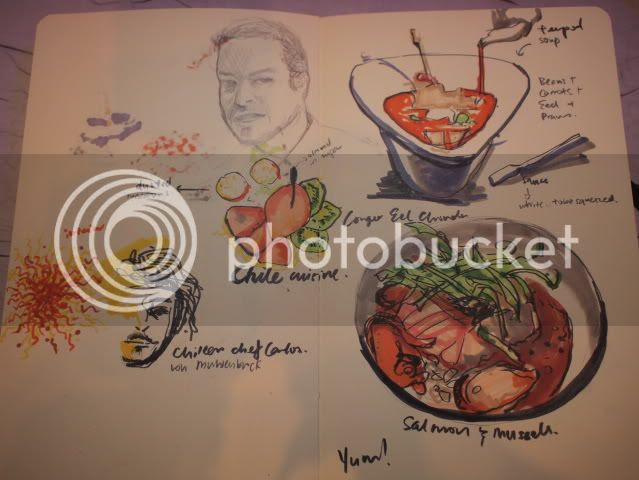 This sketch from Haze subsequently earned her a mention in the CHILEAN newspapers as well! Sigh, such talent. 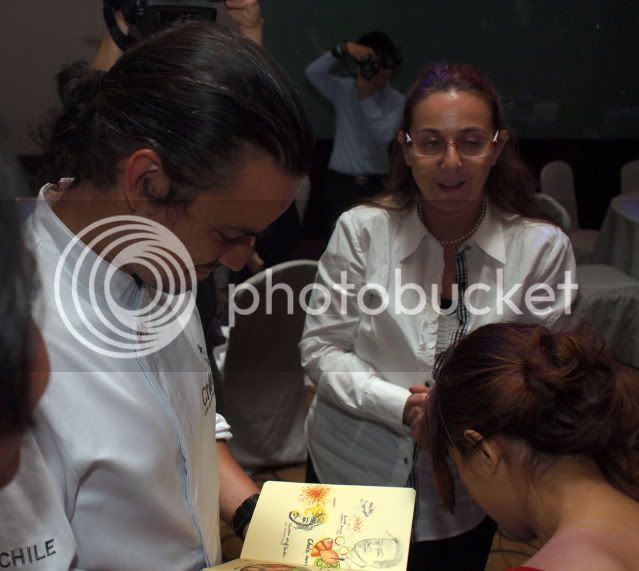 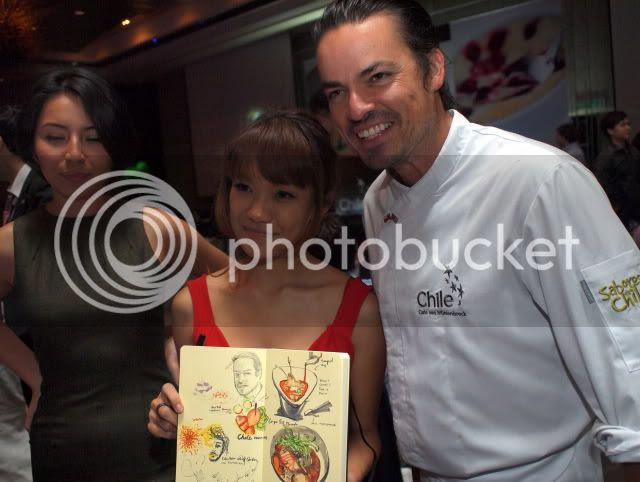 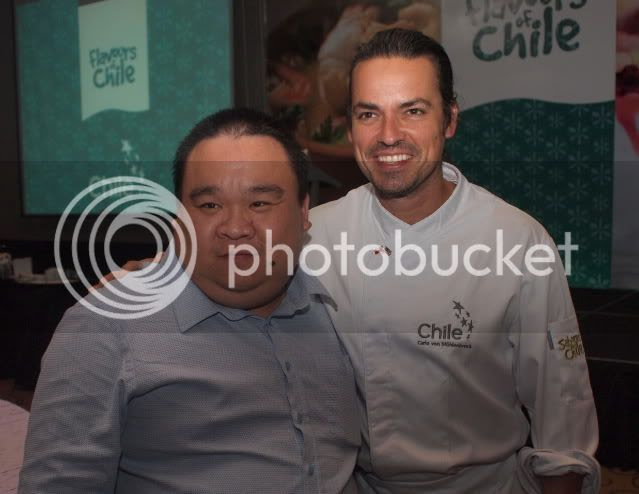 Everyone wants a piece of the Chef.

Special thank you to Marian Eu for inviting me for this lovely event.

Read CIKI's post on this HERE.
Posted by fatboybakes at 12:17 PM

you are the celebrity ok! :D

Hmm... if just about everyone's a celebrity, siapa the common man/woman? :P

AAAAAAAARGH, (Tears hair out), here I was, trying to compose a witty repartee, and all humour is wasted debating who is a celebrity. CEKIK!!!!!!

Thank you for the info. It sounds pretty user friendly. I guess I’ll pick one up for fun. thank u.

loved d post, photos and ur friend Haze is SO talented!! Pretty cool to be able to sketch fast...

she could make it into a book collection..