It's eggsasperating how yolks get the bad rap. Nothing grieves me more than seeing people eat their eggs and tossing their yolks. Okay, maybe not nothing, but at that particular moment, nothing. That is the utter disrespect and contempt for the Creator who made that perfect meal in that calcified shell.

However, just like Sophie's Choice, sometimes, separation is inevitable. Recipes call for egg whites, which begs the questions, what do we do with the REST of the egg, hallo. One such culprit is that damn dessert called the Pavlova, named after that reflex scientist, Pavlov...and his dog.... oh, hangon, maybe I'm getting my culinary history mixed up. Maybe it's named after that dancer chick...

Anyway, the yolk. What DOES one do with all that yolk? Much as I loathe people tossing their yolks from their half boiled eggs, it does make me shudder to ingest 5 yolks in an all yolk omelet. It's like being at a bad Chinese stag party. Semua telur kuning.

Since I have four hungry mouths to feed, at any one time, (the wife thankfully is capable of feeding herself), I have since found a cheap way to feed them, AND at the same time, dispose of them yolks with clear conscience. 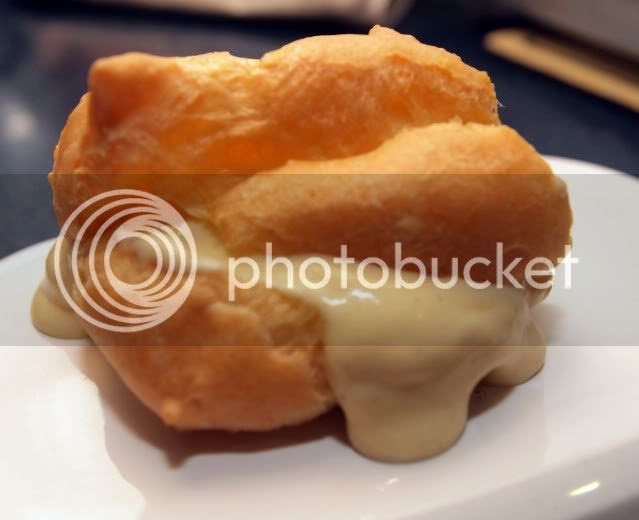 Tah dahhh, the cream puff, filled with a Creme Patissiere, lightened with a bit of whipping cream. Okay, it's not meant to be this runny, and I should have probably let it chill a bit more, but you know....kids being kids.

Here's how I get rid of them yolks.

1½ cups milk, or if you feeling generous, cream, or half and half. Nursing mothers, feel free to try out the good old breast milk, and do let me know how that goes.

Vanilla pod, or Ipod, whichever is handier.
Or worst comes to worst, that icky vanilla essence.

Boil the milk/cream with the vanilla pod, (after scraping out the seeds...if I have to explain to you how to do that, then you need to return to baking 101)...bring to a boil.

Meanwhile, and there's plenty of time to do this, whisk the eggs, sugar and cornflour, until all mixed. Pour the hot milk into this mixture, and pour it all back into the pot.

Don on your halo, because you need the patience of a saint to make this custard thicken, without burning it. Stir continuously, until it thickens, and can coat the back of a wooden spoon. It has to be wooden, you hear, because it will just SLIDE OFF a stainless steel spoon.

Stir in some butter, about 80gms, to give it some fat content and for it to thicken. What is life without some fat.

Put a cling wrap over the surface and let it cool.

1 cup water, 80gm butter - to be boiled together
1 cup of flour, added to the boiling water butter liquid, stirring until a ball of dough forms...
Remove from heat. Using an electric beater, beat slowly, adding one egg at a time, until you've used FOUR eggs.
You should get a gorgeous glossy pasty pastry, which you should immediately dollop or pipe onto a baking tray, and bake at 170C for 30-40 minutes.
Actually, make the choux pastry only after the cream patissiere is cold. Unless you want hot cream puffs with hot custard cream, which will work too.

The point is, actually creme patissiere is very versatile, and can be eaten on its own too.

What a cheap way to fill the kids. I the man. I should start a parenting blog, and how to utilise your leftover foods to fill your kids.
Posted by fatboybakes at 8:21 PM

A parenting blog sounds like an eggs-cellent idea given how you mentored one of your brood into a Junior Masterchef oredi. :D

Much easier to make creme brulee with 5 yolks. Enuf to make 6 lormaikai-sized bowls. And no need to stir until it coats a wooden spoon.

Maybe I can feed you unka with this too!! And myself! Hehe

Only you can so brilliantly link Sophie's Choice and telur kuning (not kuning telur..haha!)to the yolk. Entertaining read!

Breast milk as a substitute? Ewww...what's next? Mutha cheese? Hahaha.

eh isnt CHOUX pronounced as "shoe".. i guess not eh.. i must pronounce it as CHA OX from now on..what a valuable english lesson..

i love eggs, waste not want not! extra egg yolks can be used to make creme caramel & gelato as well

ah, babekl, what a brilliant idea, i totally forgot about those things.

nipples, i dunno whatttt they teach you in that land down under, opcors its not shoe, its cha-ox...roll eyes.

hairy berry, dare i ask what is mutha cheese? yeah, i tot the sophie's choice thing was brilliant too....alas, no one else did. chis.

gfad, i tot creme brulee must stir one? no need ah? my few attempts at CB (creme brulee, not some bad word)have been pathetic.

kenny mah, thamby and i have just given birth to the name oridi....stay tuned for the launch of ahem....FBB's pearls of parenting wisdom.

i LOVE eggs! and the yolk is the best part!! chisss .. i can't stand it when ppl order a egg white omelet! it's rediculous:P