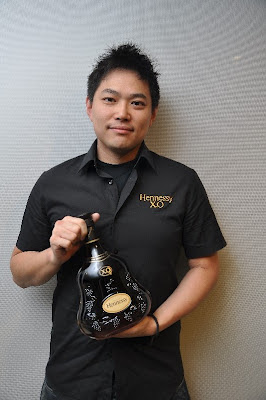 Okay, Hennessy XO as listed in the title of this post, is not a person, (at least not that I know of, but I wouldn't put it past some people to name themselves that), though Michael Han is. And is also Singaporean celebrity chef of FIFTYTHREE.

Despite getting on in years, I still enjoy the odd party or two, and if anyone knows how to throw them, it's Moet Hennessy Diageo and their PR Companies. So, it was with great interest when I read about their latest "thing", which basically entails this Michael Han to savour the food to Penang to deconstruct (seems to be the word dujour. Deconstruct. It's great for desserts, coz if a cake falls apart, just call it deconstructed) and create a dinner menu. What fun, following a celebrity chef around, (I wonder if they'll be filming him), getting to eat all that stuff, and see that the experts have to say. Much like that previous Chef who went to Penang, Edward Lee, as per my previous post HERE. (Jalan Jalan in Penang)

I quote verbatim from the press release:

Penang cuisine is a melting pot of diverse, varied influences, and it is certainly ripe for reinterpretation and deconstruction. It is with this intention in mind that Hennessy X.O Appreciation Grows invites celebrated Singaporean chef Michael Han of FiftyThree to Penang to “deconstruct” local Penang favorites to a privileged audience of gourmands. Sourcing from the heritage of Penang cuisine, chef Michael’s innovative cooking techniques is expected to break new ground.

So this will be actually part 1 of a two part event. Now part 2 sounds very exciting as well, ...

The second Hennessy X.O Appreciation Grows Gastronomy event for the year is slated to be held in Penang within the chapel of St. Joseph’s Novitiate from September 26th to 28th 2012. Flanked by Gurney Drive and Kelawai Road, the historic building was built in 1925 as quarters for novices for St. Joseph’s Training College. As part of its restoration process, emphasis was given to stabilizing the foundation. The whitewashed and terracotta-tiled building has been faithfully restored and updated in keeping with its contemporary surroundings at Gurney Paragon, a physical embodiment of the values that encompass Hennessy X.O.

Like Hennessy X.O Michael is constantly in search of innovation, refining time-honoured skills and techniques for a modern audience. His broad range of training, coupled with his knowledge of local Asian cuisine, makes him a prime candidate to approach the task of deconstructing Penang cuisine with an inspired sense of originality.

The deconstruction of Penang cuisine by celebrated chef Michael Han, the stunning locality of St. Joseph’s Novitiate and the original cognac – Hennessy X.O expresses its mysterious soul, like a classic, writing its future by drawing on the beauty of its present, without ever discarding its past. 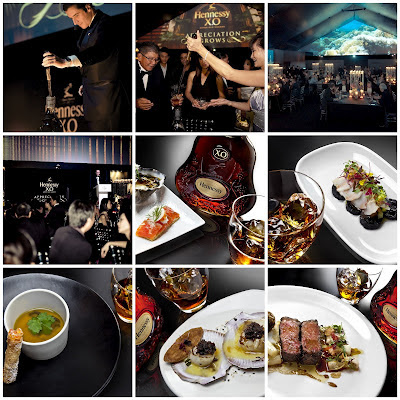 The above collage was last year's dinner at Suffolk House with Chef Chong Liew. What can I say? It was certainly a glamourous event, and we felt very privileged to be there.

I can't wait to see what Michael Han will deconstruct from this reconnaissance trip.

Law degree holder turned chef, soft spoken, apparently shy. Owns the restaurant, FIFTYTHREE in Singapore, (hmm, must find out the significance of that number, coz it definitely isn't his birth year), after stints at Au Jardin before moving on to The Fat Duck, L’Enclume and Anthony’s in England, Mugaritz in San Sebastian, Spain and Noma in Copenhagen, Denmark.

Decided to open restaurant in Singapore, because it's home to him. (Awwww, peanut did not forget skin - literal translation of Malay proverb)

Accolades (cut & pasted) - Since it’s opening in 2009, Michael has been nominated for the Would Gourmet Summit Awards of Excellence ‘Rising Chef of the Year’ in 2010 and 2011, with FifityThree nominated as ‘Best Restaurant’ in 2011. Notably, FiftyThree was featured as one of World’s 50 Best Restaurants ‘Regional Spotlight – Singapore’, and on CNNgo.com Best Eats 2010 as Singapore’s Best Gourmet Restaurant of 2010.

Okay, time to do some intensive workout before that intensive eating spree this weekend. Penang here we come!!!!

Posted by fatboybakes at 2:23 PM