The Landmark Opening of the Sheraton Macao Hotel, Cotai Central.

With so many superlatives, it was with great anticipation that we attended the Media Fam for the grand opening of this glitterati event. 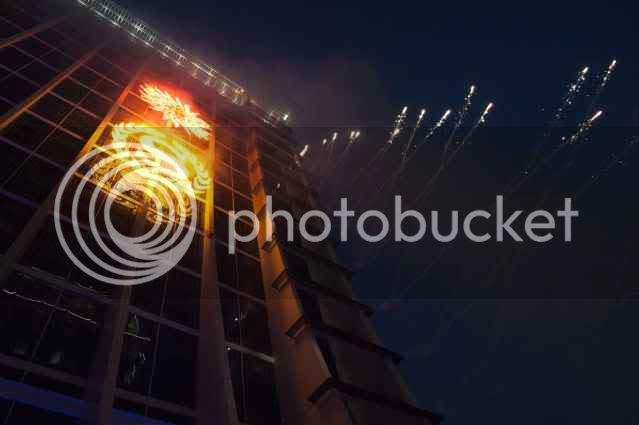 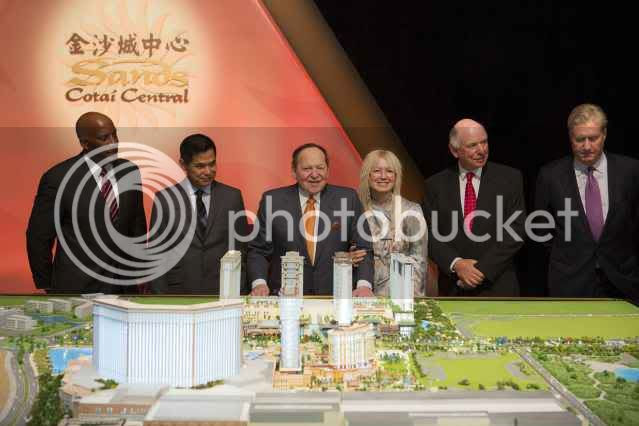 I remember the day I got an email from our dear Cindy Yoong, Director of Marketing Communications of Sheraton Kuala Lumpur, inviting a select few to attend the grand opening of Sheraton Macao, Cotai Sands.  After pinching myself to check it wasn't a dream, I quickly RSVP-ed with a resounding YES, I WOULD LOVE TO ATTEND.

We flew into Macao, bleary eyed and dazed, being on a 6.30am flight, but the minute we arrived, were dazzled by the sheer enormity of the Sheraton.  Just walking from the lobby (we were dropped off by the shuttle at the Holiday Inn lobby, as the Sheraton was still not officially opened yet) to the media centre was a sufficient work out for the day.  Security guards were placed at the barricades disallowing the public to enter into the Sheraton area, and we waved our press invites, and were ushered to the media centre, which was housed in one of many ballrooms, where Cindy greeted us and it is always good to see her smiling vivacious self amidst a sea of strangers.

We were given a tour of the hotel, in the afternoon. 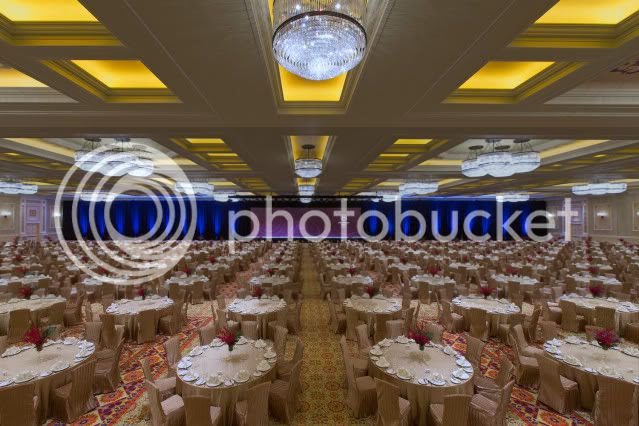 The pillarless Kashgar Ballroom, that can accommodate 5,000 guests, makes even our largest ballrooms in KL look like a mini function room in comparison.  This plus six junior ballrooms in addition to three more junior ballrooms being total flexible event space to 20,000 sq metres, or 214,000 sq ft.

Did I mention the sheer size of the common walkways, passageways, etc, is just staggering.  Next we were given a preview as to how you might live in a hotel if you are rich. 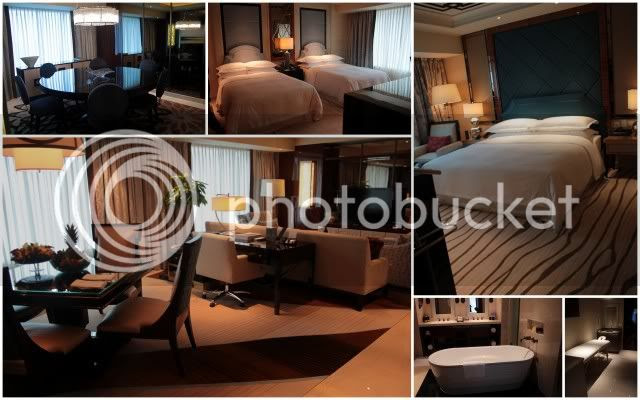 The Presidential Suite, which even has it's own massage room (right corner), 2 bedrooms, own dining room, karaoke room, pantry.  I hope one of my friends can throw their 40th or 50th birthday party here some day. 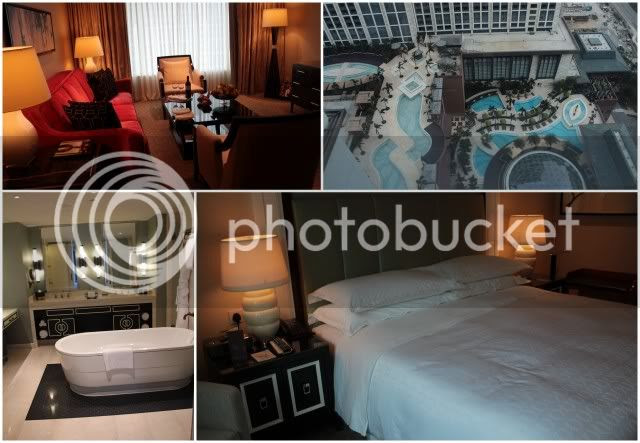 The Executive Suite.  Pretty normal, except for the stand alone bath tub.  I love those bathtubs in the middle of the bathroom. 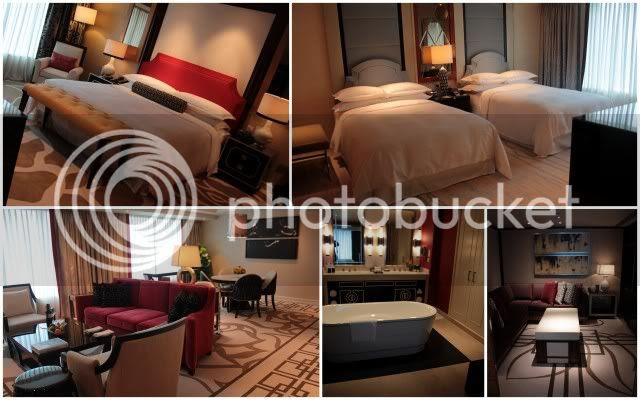 The Presidential Suite, complete with karaoke room, and 2 bedrooms.

The tour continued to the Lobby Area,which looks big enough to park a small aircraft.  However, when we saw the throngs of people on the day that we left, we realized why they needed such a big lobby.  1800 rooms, fully booked on the day of our departure.  Amazing! 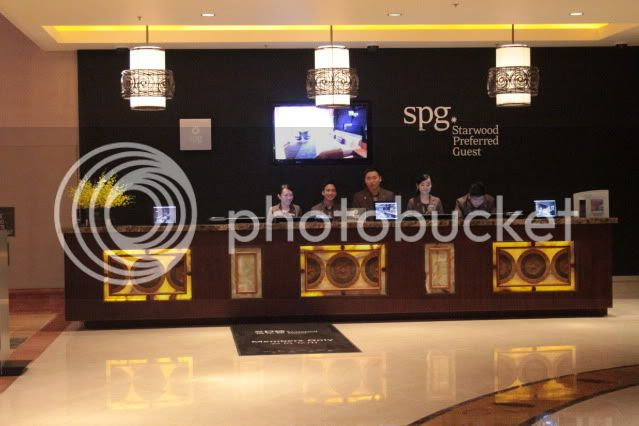 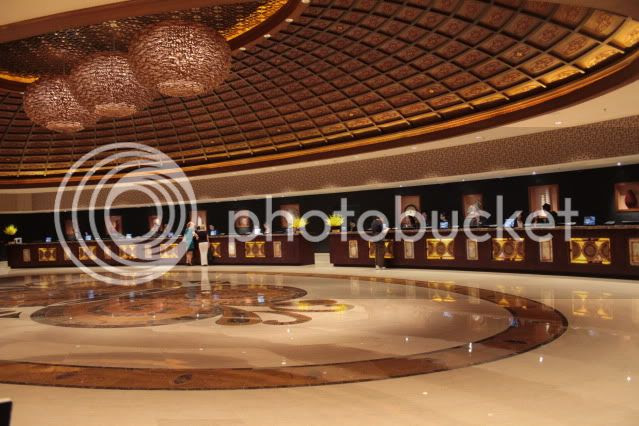 We then continued the tour, to the SHINE SPA. 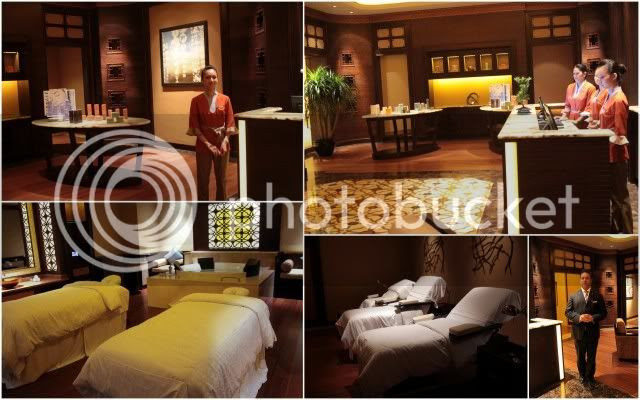 Incorporating Chinese Zodiac signs to ascertain your Element, (Wood, Fire, Metal, Water or Earth), a spa treatment with the appropriate oils and method is prescribed.  Much like a Myers Briggs test for spa treatment.  They have a program on the Ipads which is interactive that helps the customer determine their element.  The lush spa rooms come in all shapes and sizes, with couple rooms, with inhouse hot tubs/jacuzzis, reflexology rooms, ...basically an array of treatments for the weary (and loaded) traveller. 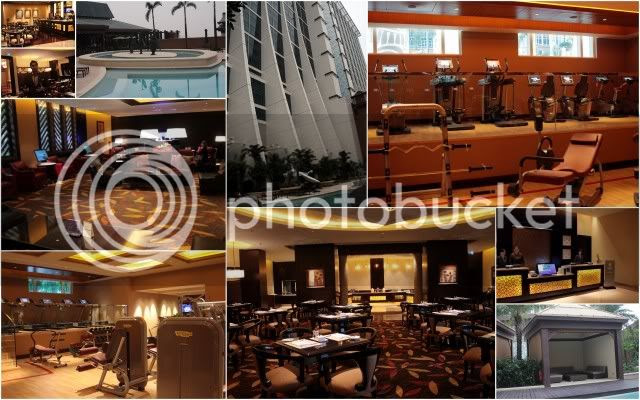 The Sheraton Club is as huge as any of our regular F&B outlets in our local hotels, if not bigger.  It has their own dining area, away from the hoi polloi, their own lounge and bar area, and access to the swimming area, known as the Sala Pools.  There are other pool areas within the complex that are not ready yet.  The Sala Pools consist of semi private type pools, compartmentalized around a circular area, with individual cabanas and kids play area. 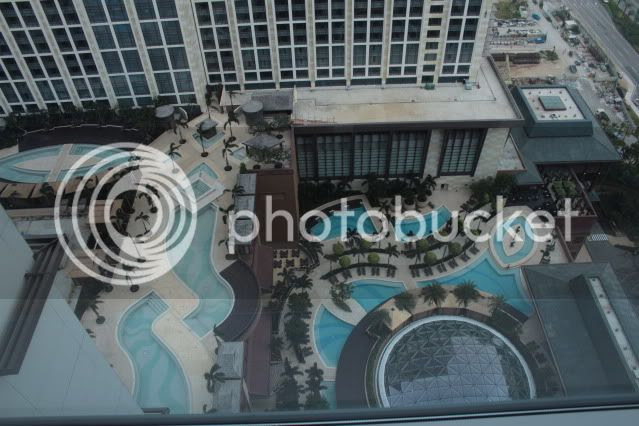 This is basically the aerial view of the Sala Pool.

The fully equipped gym made a few eyes light up, namely Ciki of CC FoodTravel, and the writer of August Man, John Ng, both gym bunnies. For me, well, que sera sera, I thought, if I make it I make it.  Talk about the antidote for not wanting to mix with the sweaty masses, the gym offers GYM IN A BAG, a bagful of items that allows you to work out in the comfort of your room.  The bag (no, it doesn't contain a personal trainer) contains workout mat, some rubber thingie for resistance, a massage roller...hmm, this sounds like more than just a workout.

After all that work, it was party time, with cocktails at the Palms Lounge, followed by a food crawl of the various restaurants.  I shall touch on the F&B Aspect of the trip in a separate post. 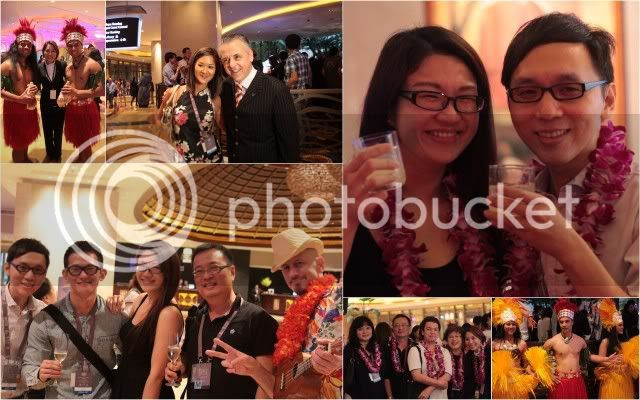 Day Two of this trip consisted of The Media Interviews, and meeting the luminaries behind the meteoric rise of the Sands group in Macao, as well as the Starwood and Sheraton big guns. 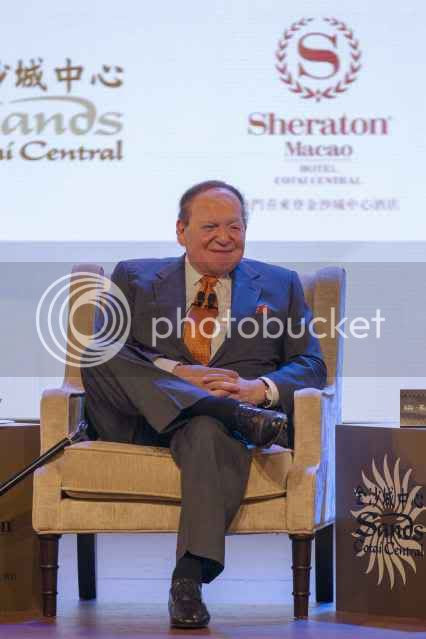 Sheldon Adelson, CHAIRMAN & CEO of Las Vegas Sands Corp.  The man with the dream, who is also behind Singapore's Marina Bay Sands Integrated Resort.  Can you believe it, Cotai (the area between Coloane and Taipa) used to be nothing, some sea, and a rubbish fill, and it is nothing short of a miracle that that "rubbish heap" is now one of the most pricey real estate in Macao, if not the world.  Like all visionaries, his original vision of recreating the Las Vegas strip in Macao was panned by critics, but tunes have changed. 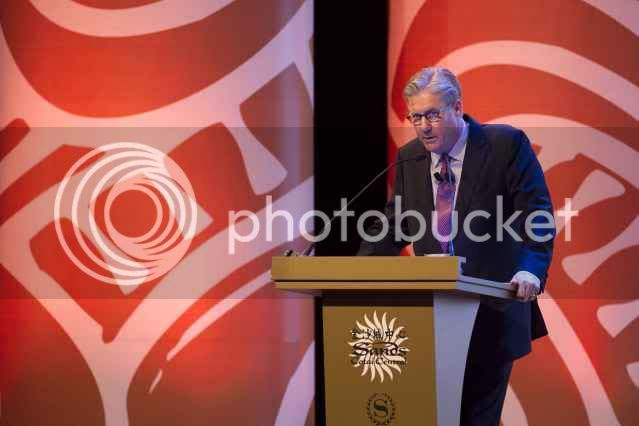 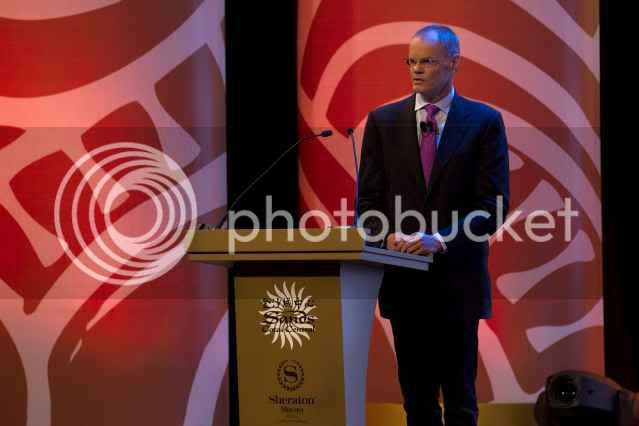 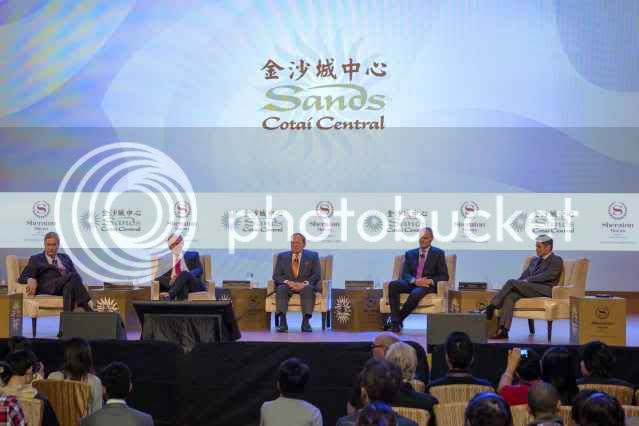 In the press conference, Mr Adelson, in reply to a question if there was a worry about the industry peaking/peaked, said that 39million visitors visit Las Vegas a year, which is 13% of the population of the USA.  If 13% of China alone visits Macao, the number would be over 200million.  So there is no worry of peaking, in a nutshell.

Amongst other developments to look forward to are the opening of THE PARISIAN, with a full scale Eiffel Tower, and buildings that will make you swear you were in Paris itself.

Just as Las Vegas in the biggest trade show venue in the world, Sheraton Macao Hotel is also set to transform Macau’s MICE scene and raise its standing and profile as a leading MICE destination in Asia. MICE is the acronymn for Meetings, Incentives, Conferences and Exhibitions.

In a question directed at the President of Sands China, he replied that they would also like to grow in Taiwan.

Just some brief statistics, in terms of Sands' EBITA (Earnings Before Interest, Tax and Amortisation) breakdown.

Certainly, Macao and the China Market are not to be sneered at.

We were also privileged to attend smaller media interviews with the Starwood & Sheraton representatives. 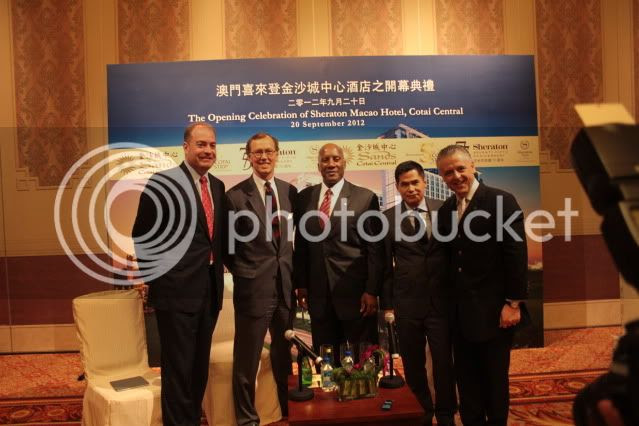 The Starwood/Sheraton interview revealed that outside of Las Vegas, this opening is the largest in the world, and the size of the Sheraton Macao is equivalent to 13½ normal Sheratons!!! With the Skytrain at Cotai Central in the pipeline, and the bridge from Hong Kong airport, which will be completed in 2016, it will take 35 minutes for passengers from HK Airport to reach the Sheraton Macao.  So the mantra by Sheraton is the RIGHT PROPERTY, RIGHT PLACE and RIGHT OWNER/PARTNER.

In the first of a few "opening ceremonies",

The local community was also involved in the day’s festivities, with a special kowhaiwhai pattern mural painting and puzzle-piecing event on Level 3 of Shoppes Cotai Central. A traditional art form of the indigenous Maori of New Zealand, the beautiful kowhaiwhai pattern – called “kori” and meaning “to flourish” – was painted and assembled as a mural in collaboration with members of the Fuhong Society of Macau, a non-profit organization providing occupational skills training and employment services to the mentally challenged. Symbolising togetherness, the event was also attended by Dr. Miriam Adelson, who helped place the final piece of the pattern, along with Qian Jin, President of Greater China, Starwood Hotels and Resorts Worldwide, Inc. 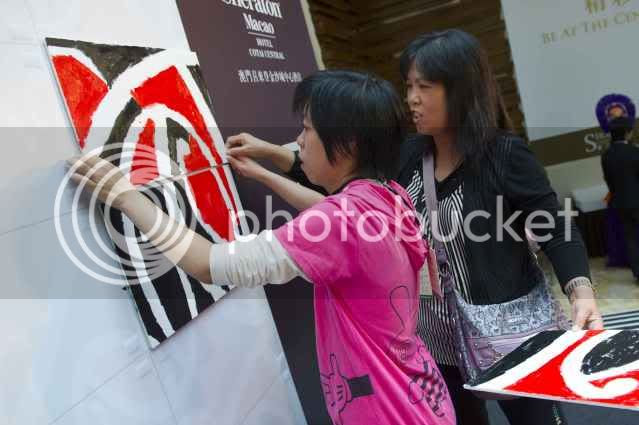 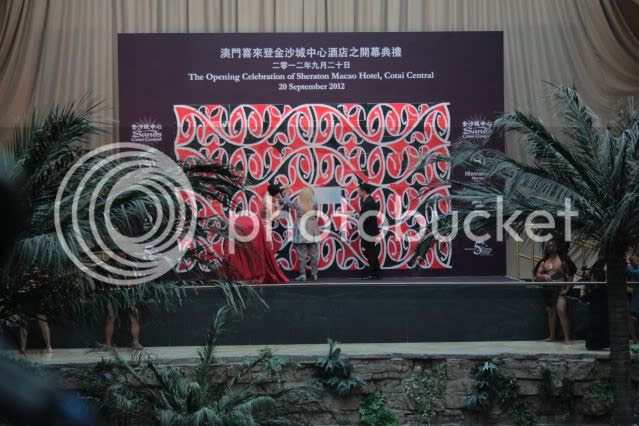 Red carpet arrivals at the evening’s ceremonial opening of Sheraton Macao included Chief Executive of Macao Special Administrative Region Chui Sai On, and Zhang Ziyi, who made a cameo appearance in all her resplendent glory. 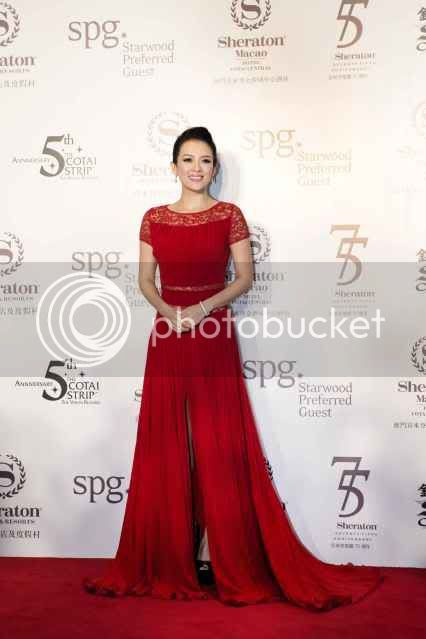 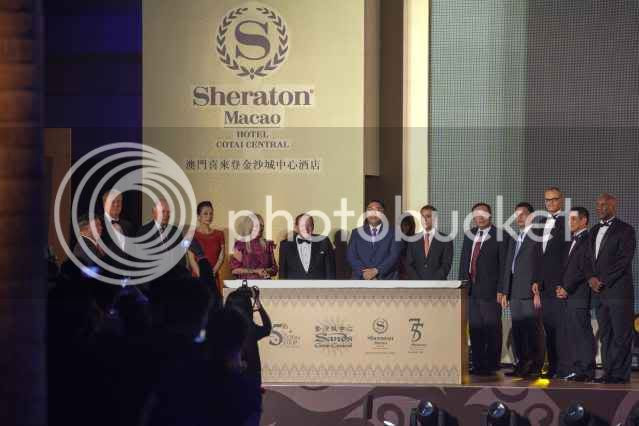 At the evening’s main ceremonial event, Maori Haka and Tahitian dancers performed at Sheraton Macao’s lantern-lit Jaya pool deck, followed by the seating of the attending dignitaries. A large goddess-accompanied heliosphere then delivered a ceremonial flame to a waiting dancer on the stage. 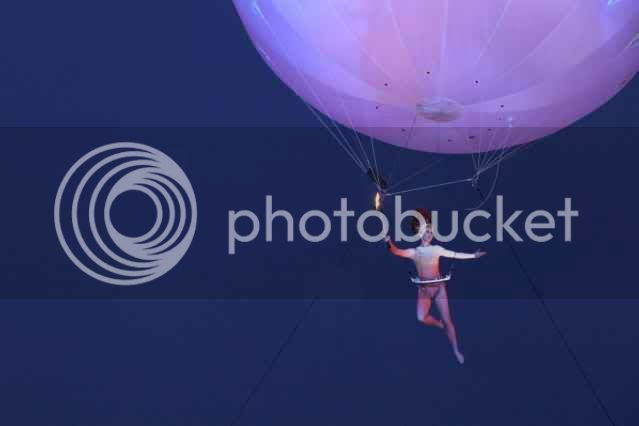 After passing the flame to the dignitaries gathered on stage, a line was ignited, carrying the flame up to light fiery logos of Sands Cotai Central and Sheraton, on the facade of Sheraton Macao’s Sky tower

– setting off a huge, choreographed pyrotechnic display that included fireworks illuminating all the Sands China properties of the Cotai Strip development: Sands Cotai Central, The Venetian® Macao and The Plaza™ Macao. Seven structures in total were lit by the display, first in sequence, and then altogether in unison for the spectacular grand finale.

I was totally dazzled (the champagne helped too) by the spectacular fireworks display that lighted up the whole night sky.  Truly an experience to be remembered. 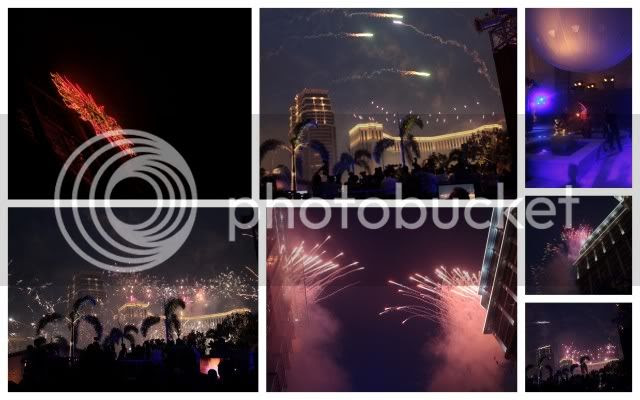 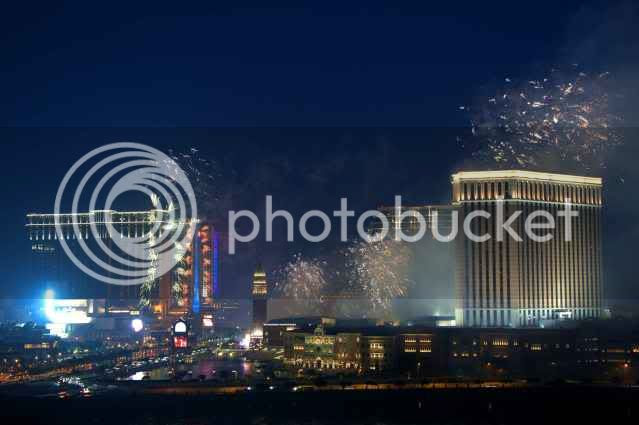 And of course, what better way to end the night than drinking it away, ....with free flow plonk, courtesy of Sheraton, at the Pool Side Party, in great and fun company! The Malaysian media contingent RAWKS! 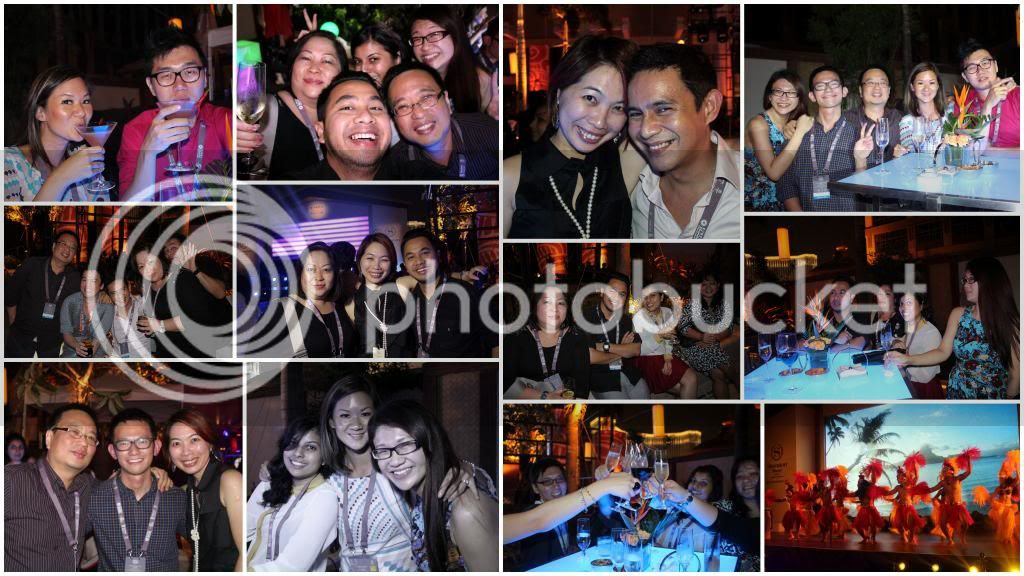 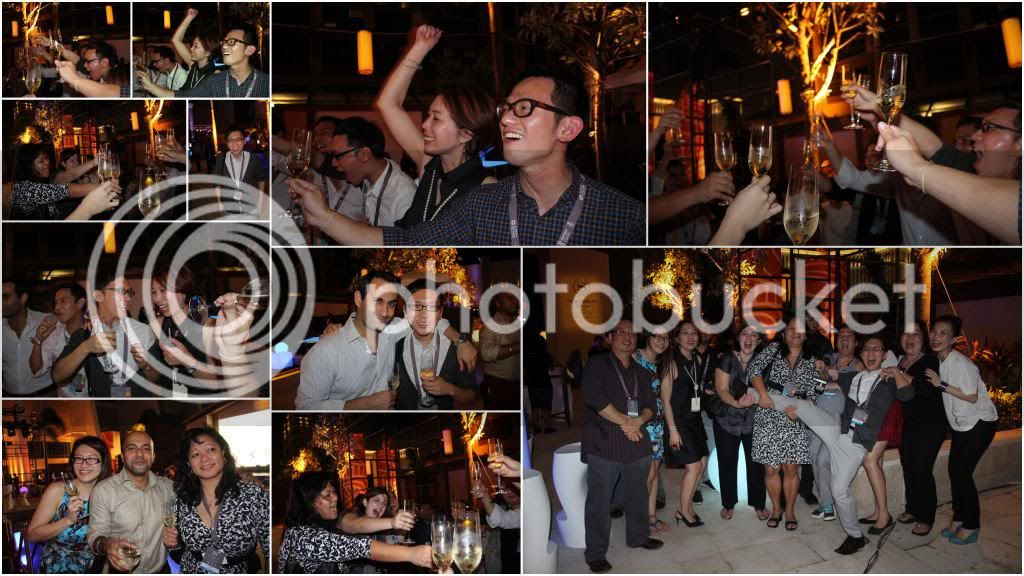 Part two coming up, and will feature the F&B during this wonderful trip.

wow! they seem to like things big in this new hotel hor? not a bad thing i must say.

i'm sure you ad a blast there...welcome back to reality :-P