You Don't Have to Be Pregnant for (Oriental) CRAVINGS

It's in the air, and this post is dedicated to all my friends who carry within them new life. (no, tapeworm and bacteria do not count as new life).

Many years ago, my mother raved about this place in 1Utama, with the delicious hokkien mee.  Strange place to find hokkien mee, I thought to myself.  And sadly, I hardly have the luxury of traipsing the mall on weekdays, and this outlet does not have Hokkien Mee on weekends.  This place I speak of is ORIENTAL CRAVINGS, located on the ground floor in the new wing.  (apparently its now the "old new wing", since the old wing is refurbished, and is the "new old wing").

I have eaten here a few times, but always in a rush, just before catching a movie, and have always found the food consistently good.  But as I was always in a rush, the food bypasses my tongue and the subtler nuances and flavours of the food gets wasted, so when the Makan Fairy Godmother invited me for lunch at Cravings, I was delighted.  Actually, apparently the lovely proprietess, Fay, had asked her to invite me.  I am acquainted with Fay by way of cake, as she had "shamelessly" name dropped Makan Fairy Godmother's name when ordering cake.  In the culinary world, it's equivalent to dropping the PM's name to secure a project.  But I digress. 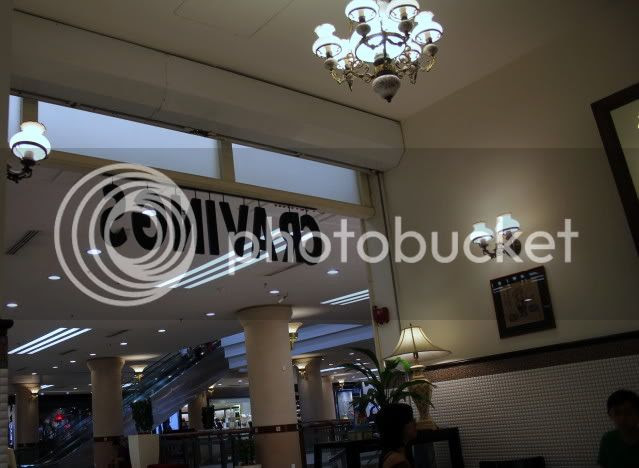 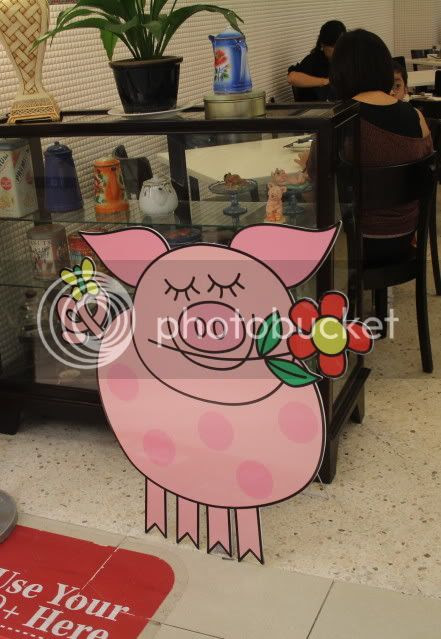 Just in case one wonders about the kosher-ness of the place, this cute lil sign says it all. And yet, to reiterate, another reminder.... 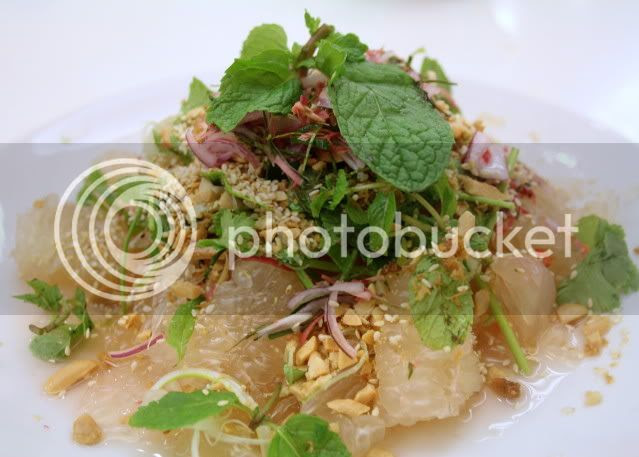 A fabulous pomelo salad, embellished with mint, bunga kantan, nuts, onions, coriander with a lovely tangy dressing, probably some fish sauce, and lime.  So refreshing it could wake the dead. 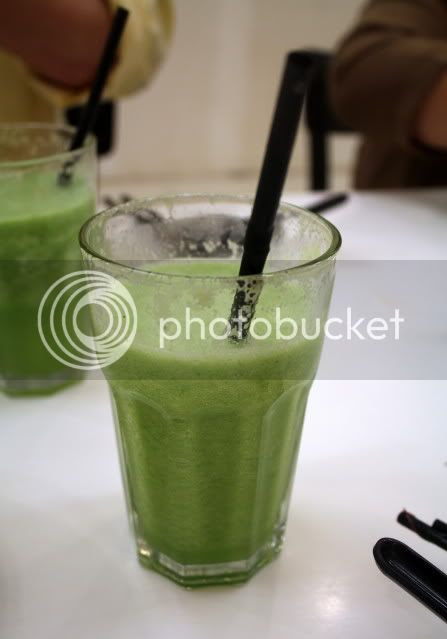 Cucumber and calamansi ...I am sooo making this at home.  How could I not have thought of this combination earlier. 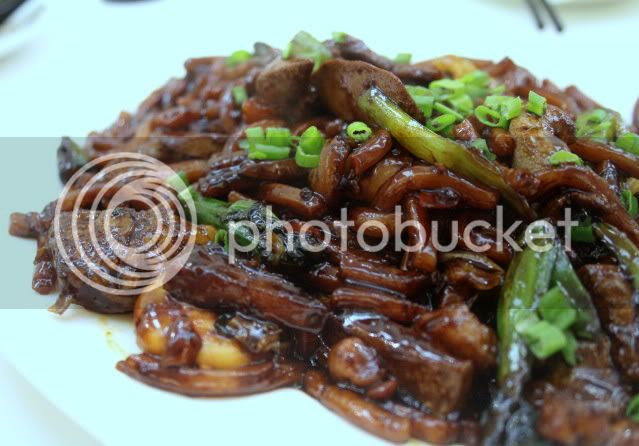 I had told Fay before that I have not tried her famous Hokkien Mee, and she so kindly ensured I was a Cravings Hokkien Mee virgin no more, and even ensured extra "liu", like liver, and lard.  Honestly, it did not disappoint, and right now, just looking at this picture, I am seriously craving for this again.  I feel like Pavlov's dog who's just heard the bell. 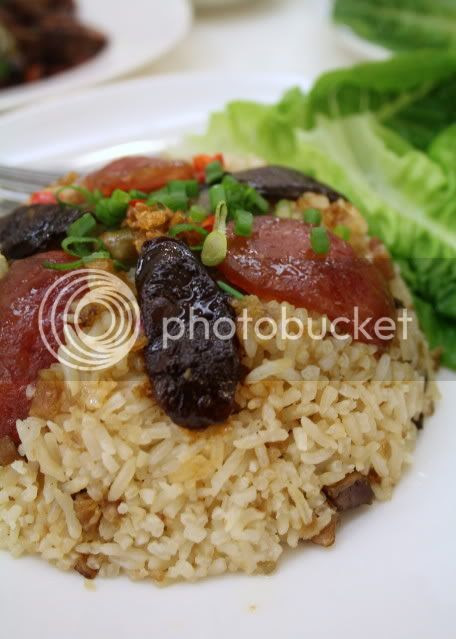 Lap mei fan, in keeping with the season.  I was watching French food at home last night, and so happened Laura Calder was bemoaning the lack of adjectives apart from "delicious", and was going through the thesaurus.  I am glad that done to death word "awesome" was not part of the accepted synonyms by the English speaking world.  She had toothsome, (which is quite nice), palatable (lacks enthusiasm), scrumptious, yummy, and scrummy...(a marriage of the former two).  So yeah, I would say the lap mei fan is SCRUMMY!  Fluffy grains of aromatic rice, the gaminess of the duck liver sausage, with the comfort of the usual chinese sausage, and the exotic chinese new year wax duck. 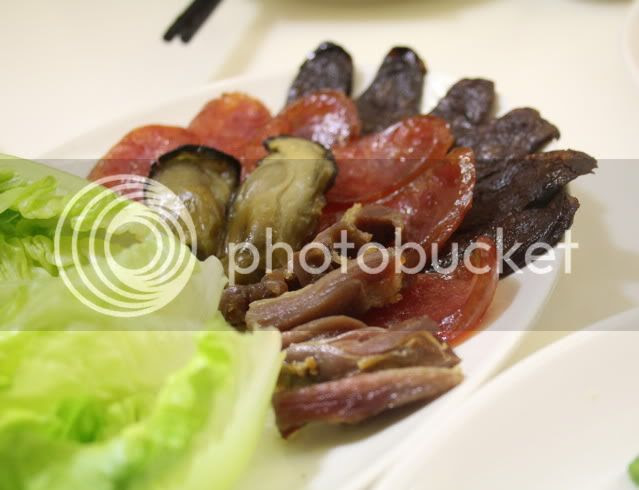 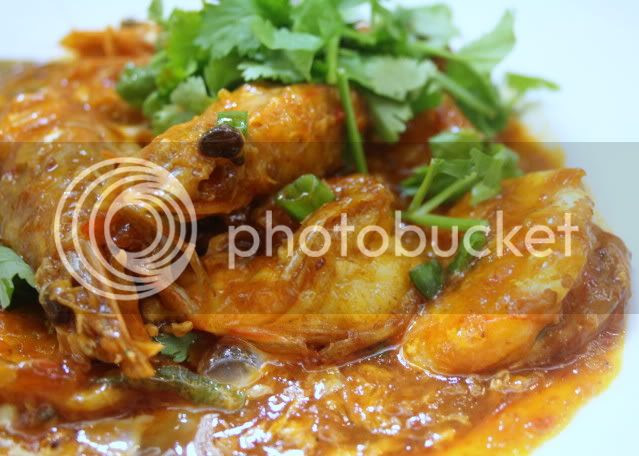 Chilli prawns succulent and a delicious gravy, served with a pile of toast to lap up all that goodness. 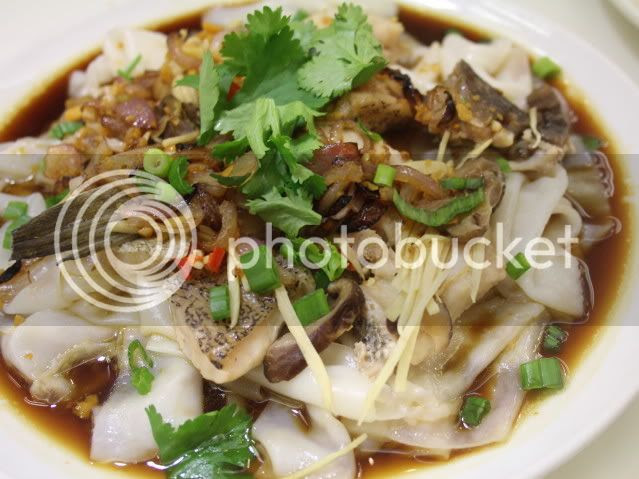 A dish apparently inspired by Pure Glutton, from one of her Penang posts, a silky smooth cheong fun that just glides down your throat, with pieces of fresh garoupa, in a most savoury soy based sauce. 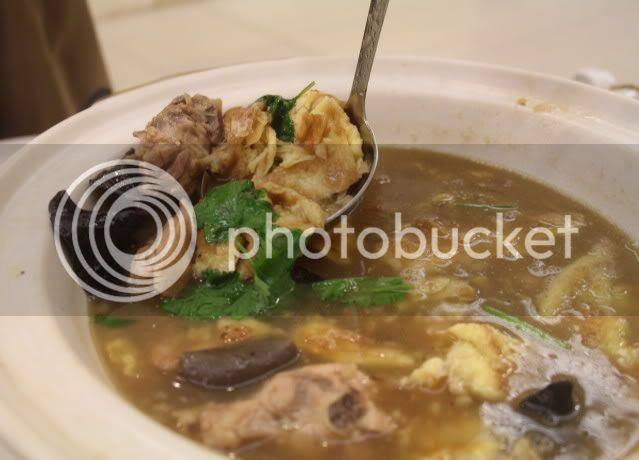 Rice wine chicken, OOOOOOOOOOOOOOOOOOOOH, I would so give birth just to be able to have this during confinement.  This version is a bit sweet, Cantonese, I believe, and I can feel my breasts ..oops, chest, warming with a glow that is akin to sitting by a fireplace in winter.  I can see why women want to give birth. 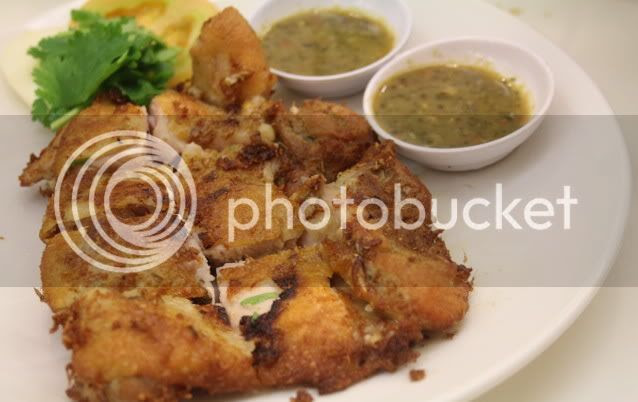 I can't remember what this is called, but it's basically some form of chicken chop, with a sauce to boot.  I was really full by this time actually, and it doesn't take a genius to figure out why.

Food is reasonably priced, and delicious and scrummy, it's a place you can revisit over and over especially if you live or work around the area.  In addition to the lovely food, there was the sterling company of Fay herself, Makan Fairy Godmother, Paranoid Android and Pure Glutton.....a most fortituous lunch indeed.

Love the food there! Always have the porky curry me! Will definitely be trying the Ginger Chicken soon hehe x