It's always nice to receive invitations from G2 PR because their events always rock! So, when the lovely Mel called me, with very little notice, to attend a Moet function the following day, it didn't take much persuasion to drop everything in the day job, and come running to the Mandarin Oriental, for the Moët & Chandon Gourming.

Well, it was an educational afternoon to say the least.  For starters, I found out how to take the feeder bus from Bangsar to the the LRT, and a wise decision THAT turned out to be because the traffic going into town on a Friday afternoon, was diabolic, to say the least.

The next nugget of wisdom I gleaned, was the shocking realisation that all my life I've been pronouncing the name Moët & Chandon wrongly.  Oft mistaken as MO-YEA...afterall, isn't it french, and aren't all French Ts silent, at the end of the word, like Cliquot, Buffet, Fillet, Chalet ... But as it turns out, the "ë" before the T has two duttis, which means the T is pronounced, so it's actually Mo-wet.  And as someone pointed out, Hermes is Air Mess.  Not owning any of the bags, I wouldn't know how to say the word, obviously, but in the case of Moët, well, I do drink the stuff often enough to at least have to know how it's pronounced.  Well, there's a whole list of commonly mispronounced words HERE, so I am obviously in good company.

Next on life's lessons, the word GOURMING, which is the unholy spawn of gourmet and tasting.  Created specailly for this culinary workshop, its purpose was to
* revive the art of elegant snacking (as opposed to inelegant snacking of peanuts and beer?? I'm not sure what that means exactly)
* let the participants understand how different types of food and cuisine can pair well with Moet & Chandon champagne. 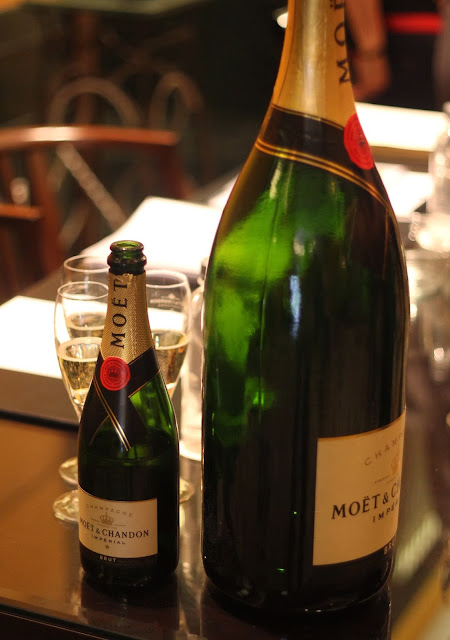 We start off milling around in the foyer, very ladidah way of spending a Friday afternoon, sipping champagne, and blowing air kisses to all and sundry, trying to appear refined.  Luckily for me, I had the company of the inimitable Fay Khoo, which automatically boosts one's standing in any event.  Needless to say, I stuck to her like a leech. 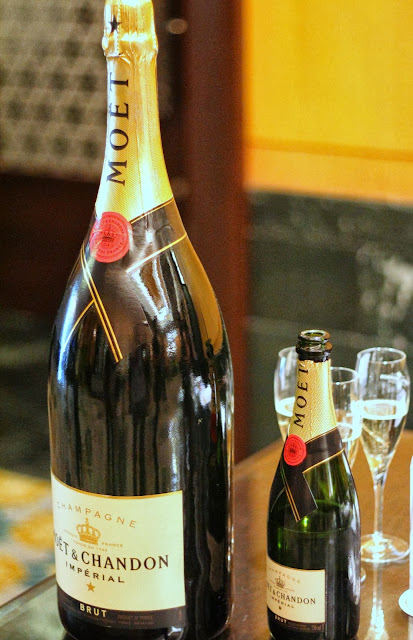 This photo, posted on Instagram, got me a reply, "Is that a Magnum, or are you messing with my mind".  Well, turns out the magnum bottle was empty actually, but the NORMAL bottle was definitely full and flowing.The Moet Imperial, a living legend, is the flagship of Moet & Chandon, and distinguishes itself by a bright fruitiness, a seductive palate and elegant maturity.  It is a balance of 30-40% pinot noir, 30-40% Pinot Meunier, and 20-30% Chardonnay.   The aromas reveal apple, pear, white peach, and citrus fruits with floral nuances and elegant blond notes of brioche and fresh nuts. 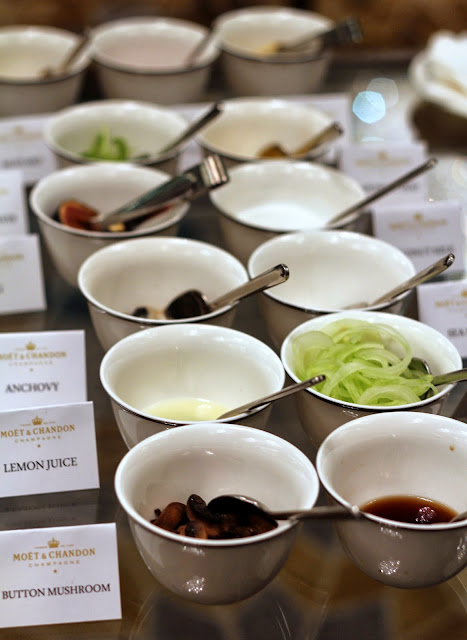 We are ushered into the ballroom, and introduced to the concept of the workshop, where by we are divided into sets of 2, (Fay Khoo being my companion), and we are given a selection of goodies and ingredients to mix and match and pair with champagne. 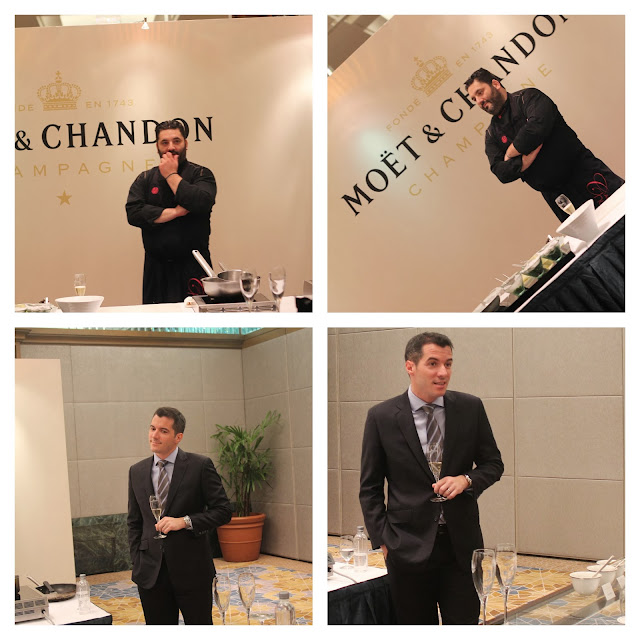 Presenting the culinary part of the workshop, was Chef Nicholas Isnard, who hails from the South of France, (isn't there something about the "South of France" that just yells refinement and culture), and was head chef of Auberge Du Vieux Puits when he was only 25.  He moved on to Le Chateau de Curzay, during which time he created his firstg revisited onion soup, and the Vichyssoise oyster.  In 2008, he bought the Auberge de la Charme a Prenois, near Dijon, and within a year, got their Michelin star.

With such a sterling resume, we were truly privileged to be able to sample some of his offerings.

To instruct on the champagne part of the workshop, the dashing Arnaud Mirey, who is no stranger to us, having been at quite a few Hennessy Appreciation Grows events.  He is the Regional Brand Ambassador of Moet Hennessy Asia Pacific, since 2008. 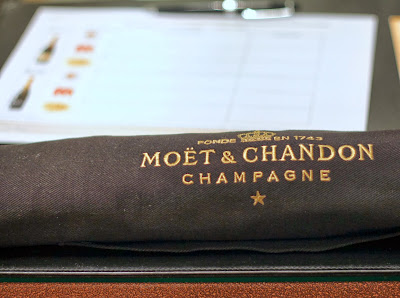 We don on these very classy aprons, which unfortunately made me look even fatter. 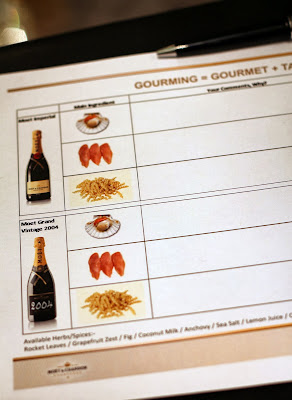 The three main dishes for the day were scallops, chicken and penne, to be paired respectively with the Moet Chandon Imperial and the Moet Grand Vintage 2004.   Grand Vintage 2004 embodies the three essential values of the Moet & Chandon Grand Vintage spirit, which are freedom of interpretation, selection of the year's most remarkable wines, respect for the individuality of each vintage for finely aged champagnes which stand out for their maturity, complexity and charisma. 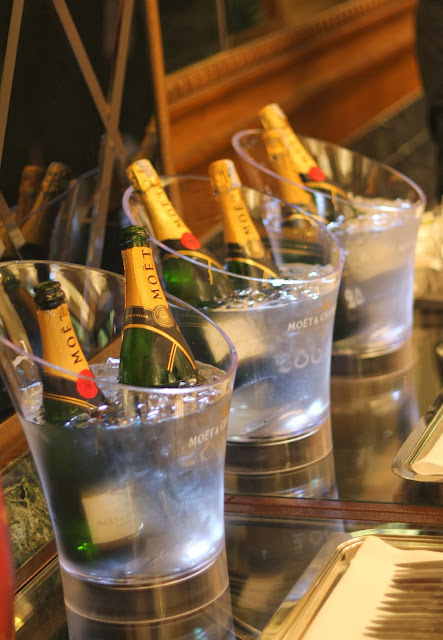 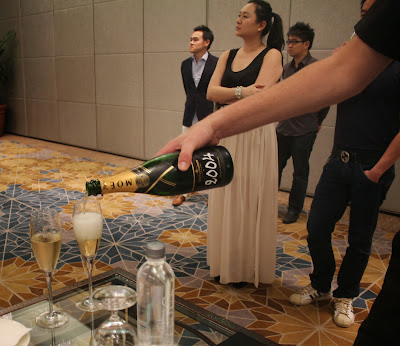 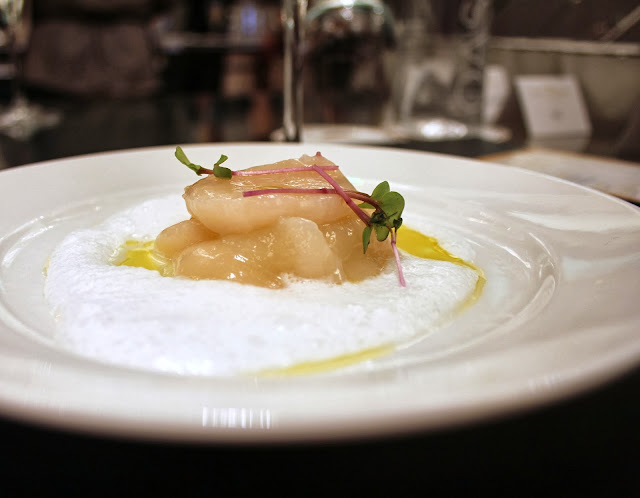 The first dish, Scallop Carpaccio , cucumber tagliatelle, yuzu vinegar and coconut milkshake.  Each bite sent shivers of esctasy down the spine, and we washed it down with the champagne.  I actually thought it paired well with either or, but of course, the Grand Vintage 2004 was better in this case.

We were left to create our own concoctions using scallop as the main ingredient.  We (by we I mean Fay and I) tried scallops with some grapefruit zest, some lemon juice, all very safe and commonsensical pairings, that went quite well. 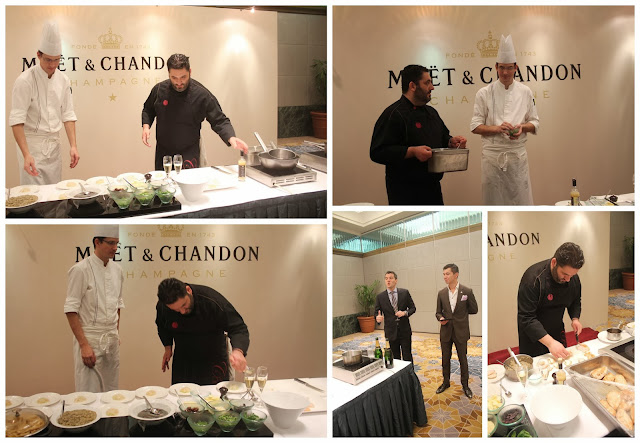 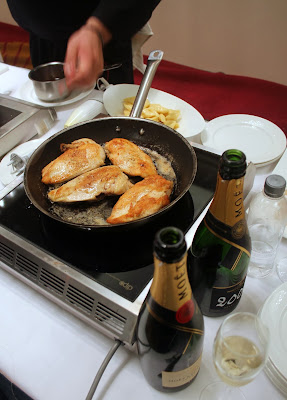 Next up was the Chicken Fillet, with Pototo Gnocchi and Eggplant.  Loved this even on its own.  Again, it paired better with the Grand Vintage 2004. 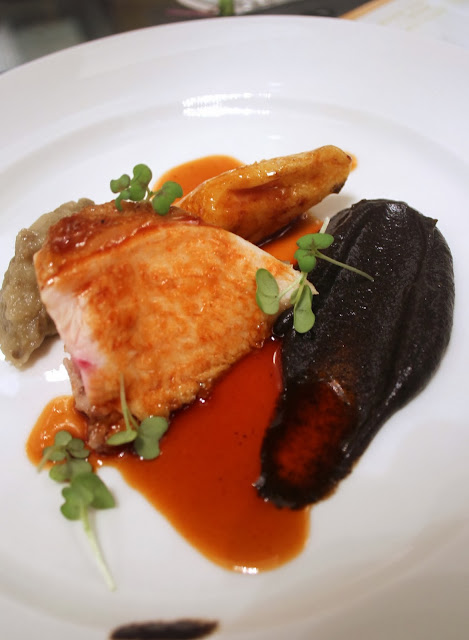 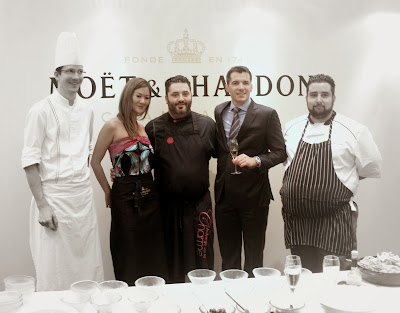 Umei of CC Food Travel always manages to get into all the glamour shots. 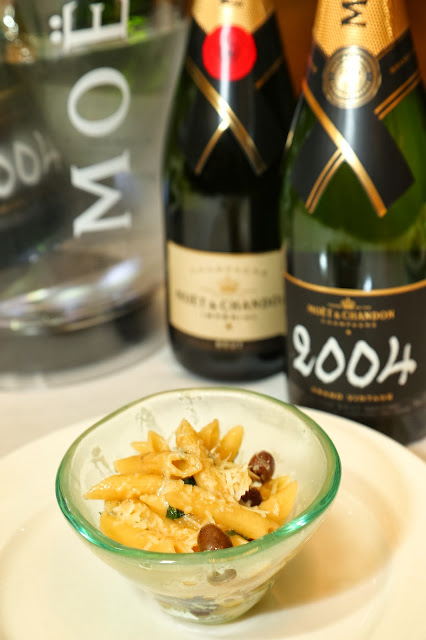 The Penne Pasta with Olives, Basil, Parmesan, which actually for some reason, tasted better with the normal Imperial.  Maybe by this time  I had imbibed a bit too much, and was flushed like a boston lobster, so the lines are blurred.

A little bit on the additional aromatics we were given to play with.  For bitterness, we had aragula, and grapefruit zest, Sweetness, Coconut Milk and Figs (I Loved the figs, they went well with the chicken, and scallops), for saltiness, anchovy and sea salt, for sourness, Lemon juice and cucumber, and button mushrooms, vinegar, etc ...listed under "less desirable" were mustard, cut chilli and artichoke.  I'm not sure why, but I thought the lemon and chilli made a fairly nice dressing for the scallops. 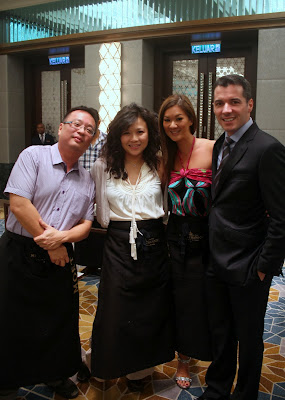 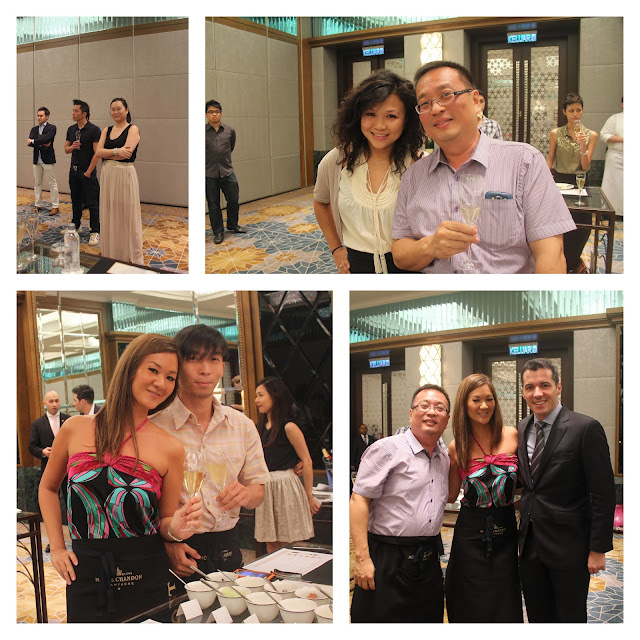 A warm buzz of contentment accompanied me back all the way on the LRT to Bangsar.  Thanks MHD & G2 for yet another wonderful event.
Posted by fatboybakes at 11:53 AM

wow. written like a gourming pro! I think we need more sessions to fine tune our skills :P

I like the word Gourming. Hope it's here to stay. All this while I have been pompously flouting my 'French' pronunciation of Moet... thanks for the education!