When I got an invitation from old friend, Jasmine, I was INTRIGUED at the idea of a pop up cocktail bar, and was really looking forward to discovering the place.  It really takes an inordinate amount of faith in the directions given, because, looking at the place from the entrance, you would be hard pressed to believe that such a place exists, I guess hence the term pop up.

Located on Jln Riong, just before the entrance to NST's Balai Berita, within the compound of Art Printing Works, a functional printing press, behind the new coffee cult place, Pulp, lies 44 @ APW.  Why 44? No idea, the main address outside is 29 I believe. 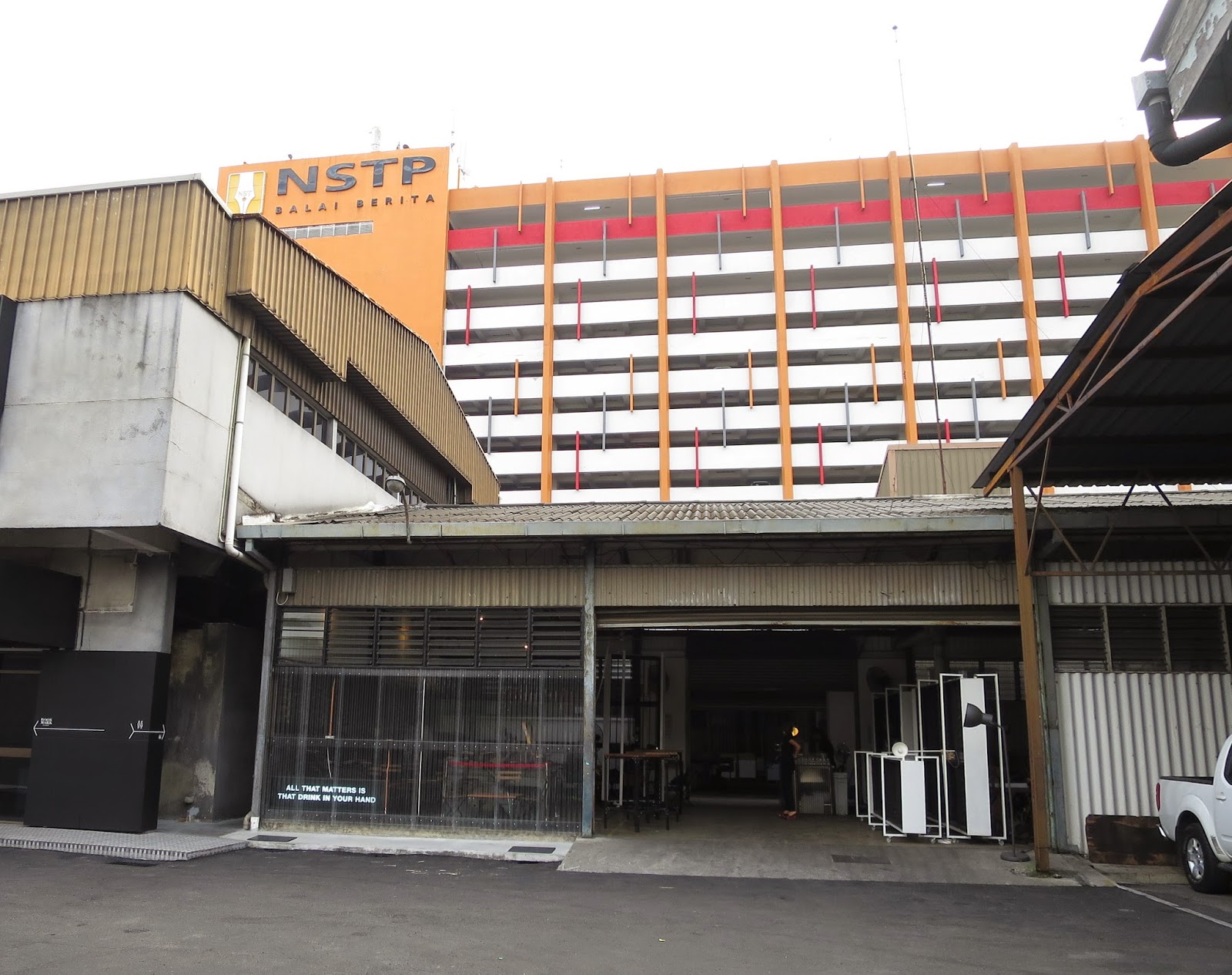 This is what it looks like from the outside.  Fear not, fine adventurers, just follow the straight path, until you see the main clue, that striking sign that says, ALL THAT MATTERS IS THAT HAND IN YOUR DRINK. 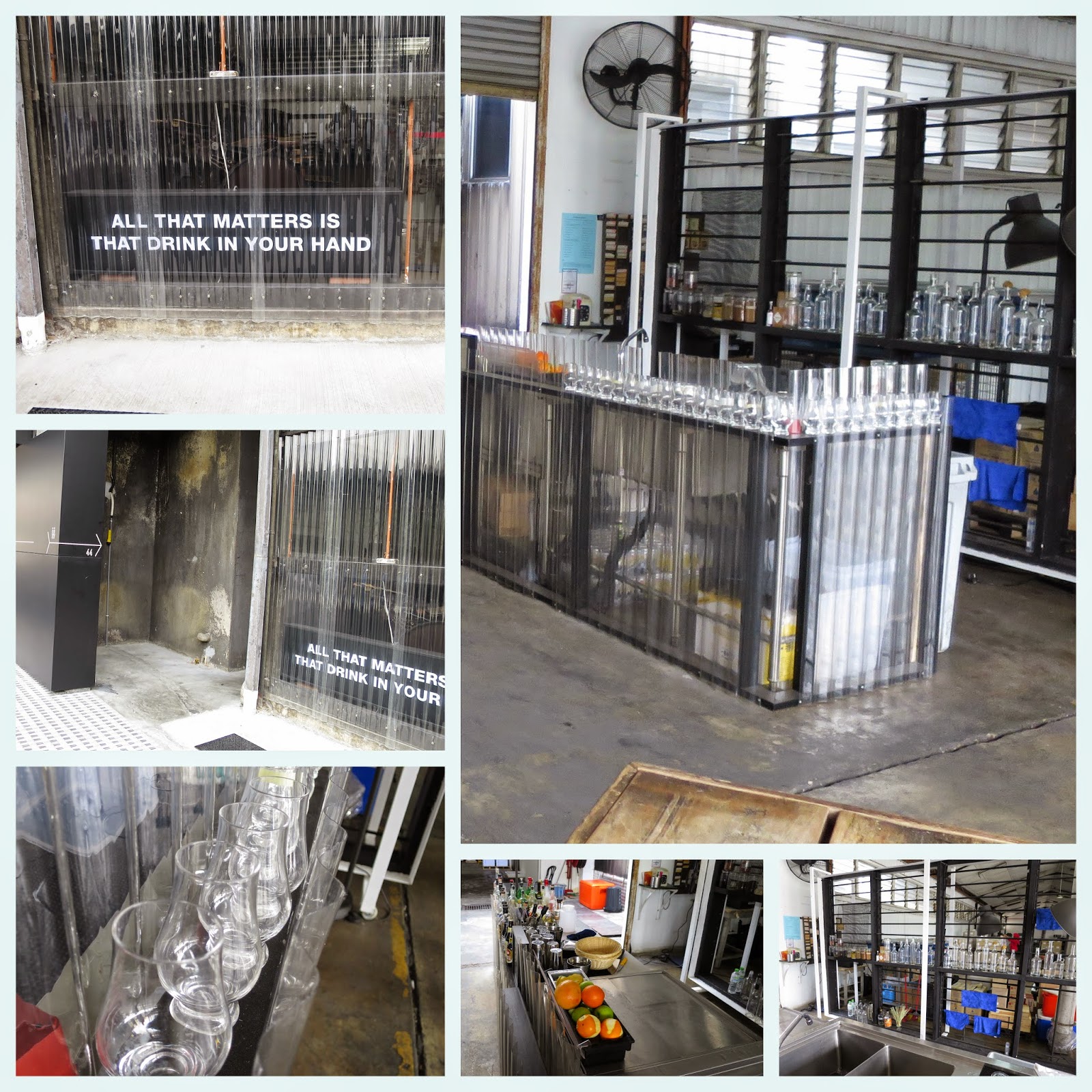 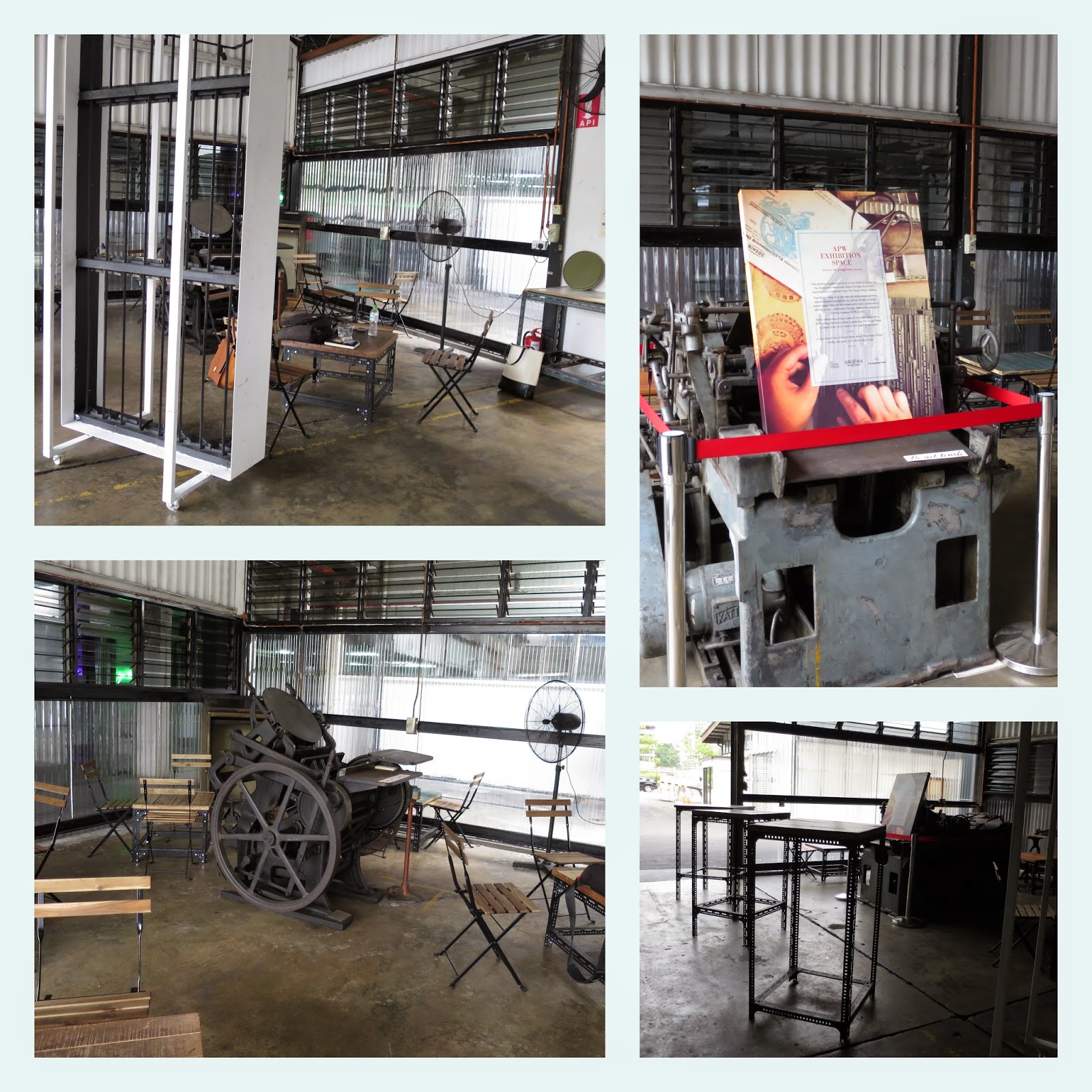 The odd bits of printing press paraphernalia dot the place, giving it a minimalist eclectic feel, and despite the lack of airconditioning, the place is rather cool, in more ways than one. 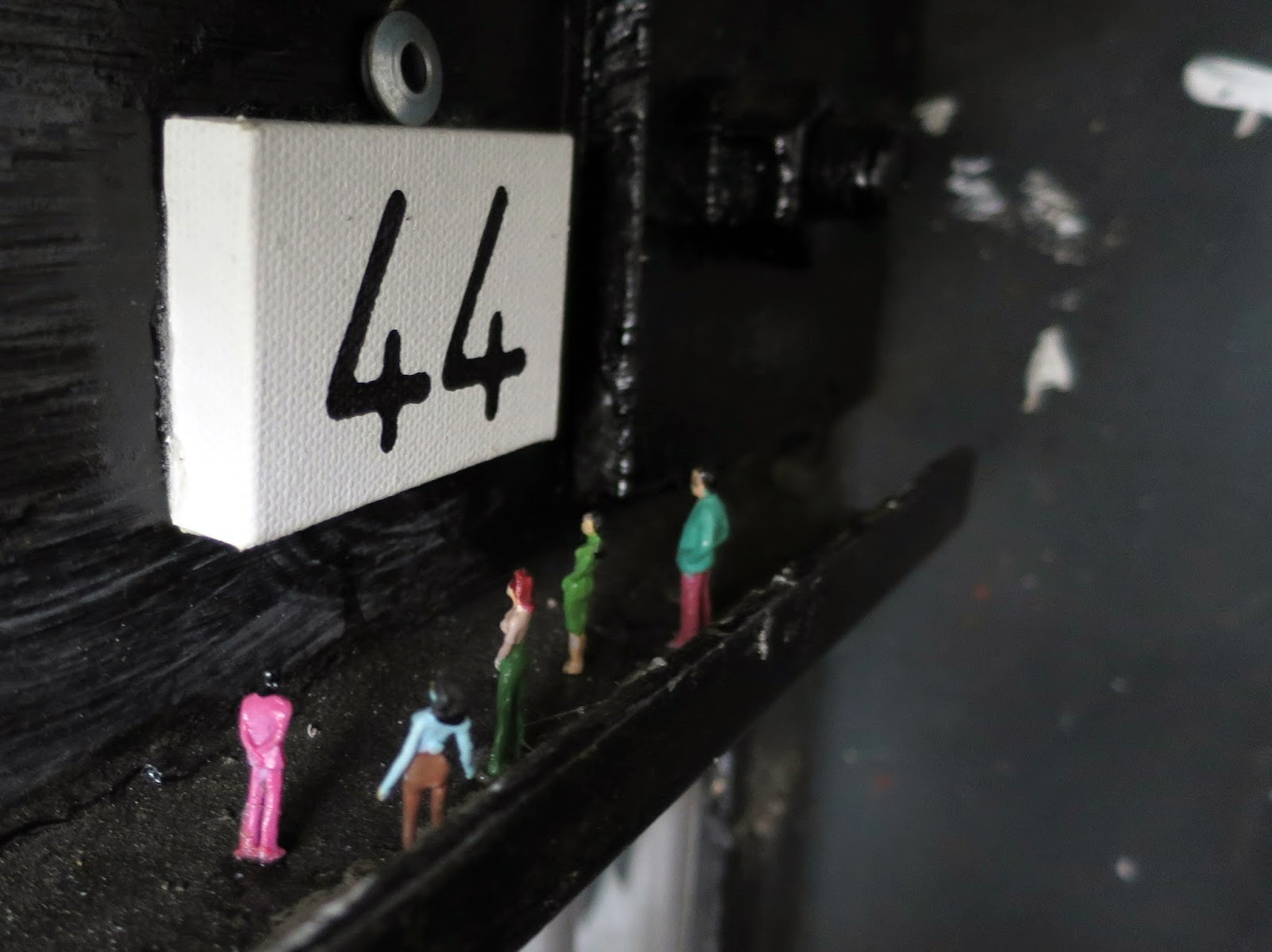 Lilliputians gazing in awe at the number 44.... 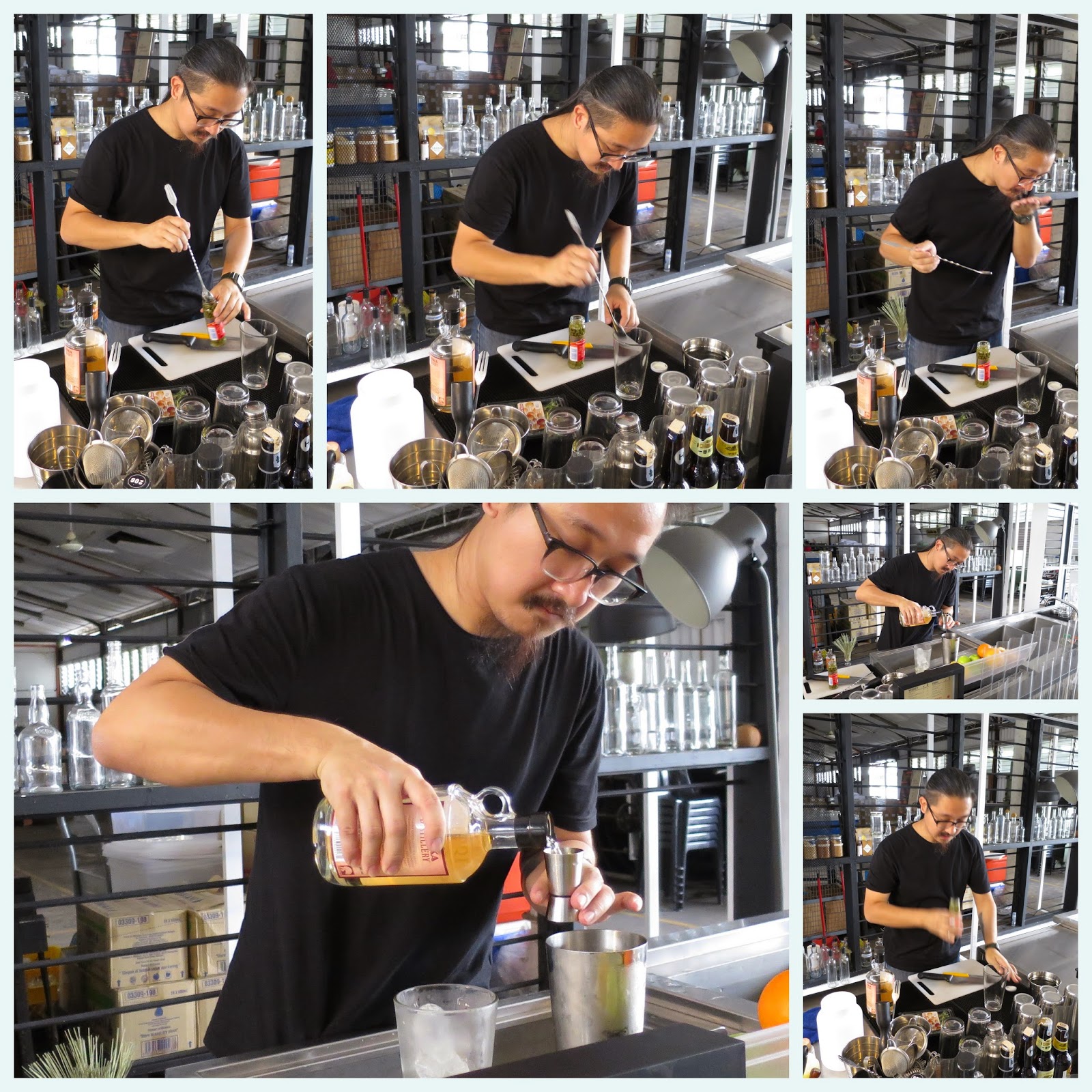 Our "mixologist", CK, is actually the GM Of the Bar for all their outlets (The Bee group of restaurants) and we were honored to have the boss mix for us that day, because the regular mixologist was on sick leave. 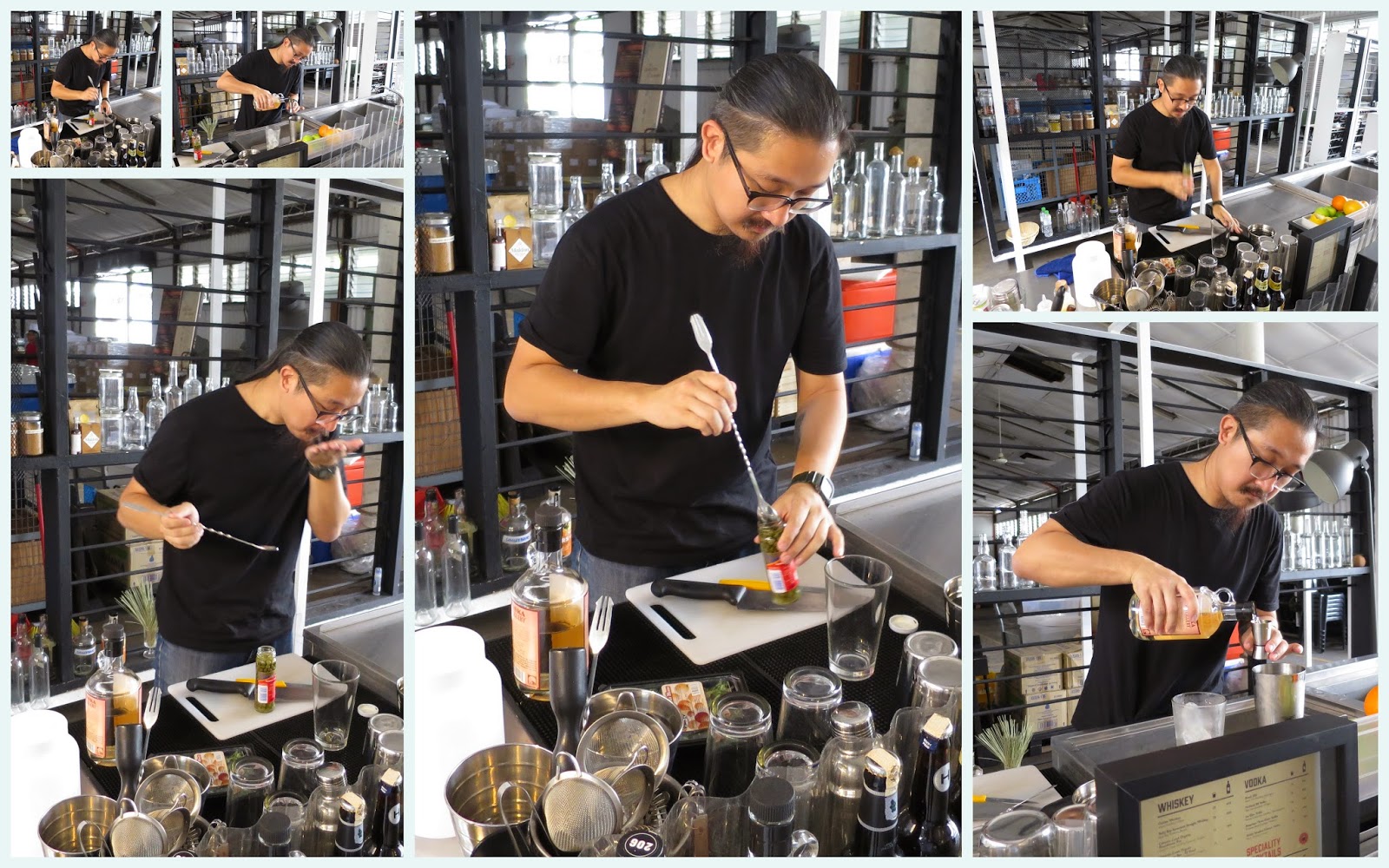 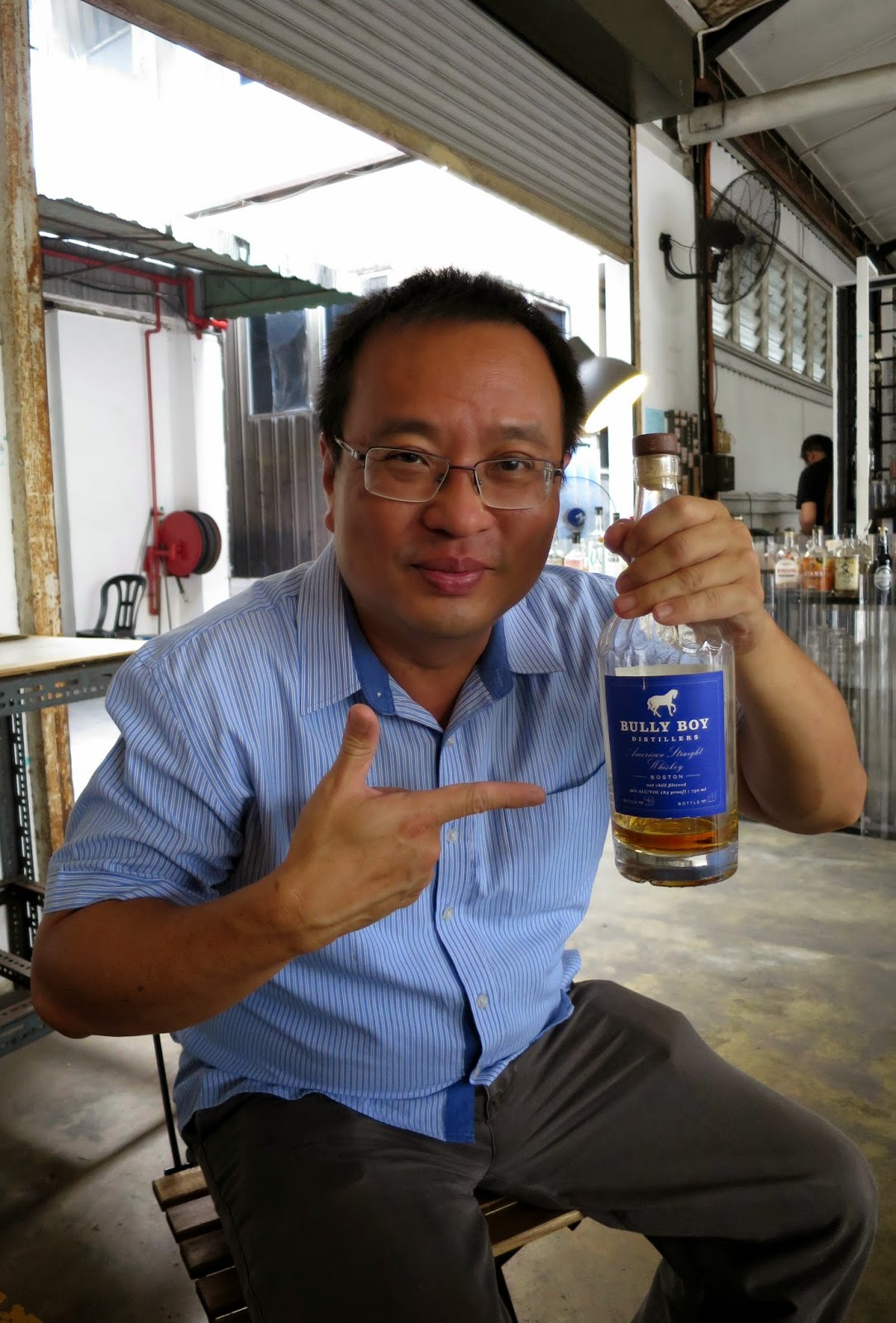 The most fascinating thing about the place is the choice of alcohol, most of which we had never heard of before.  Definitely none of your generic Glens or what not, and most of them have the most interesting names. 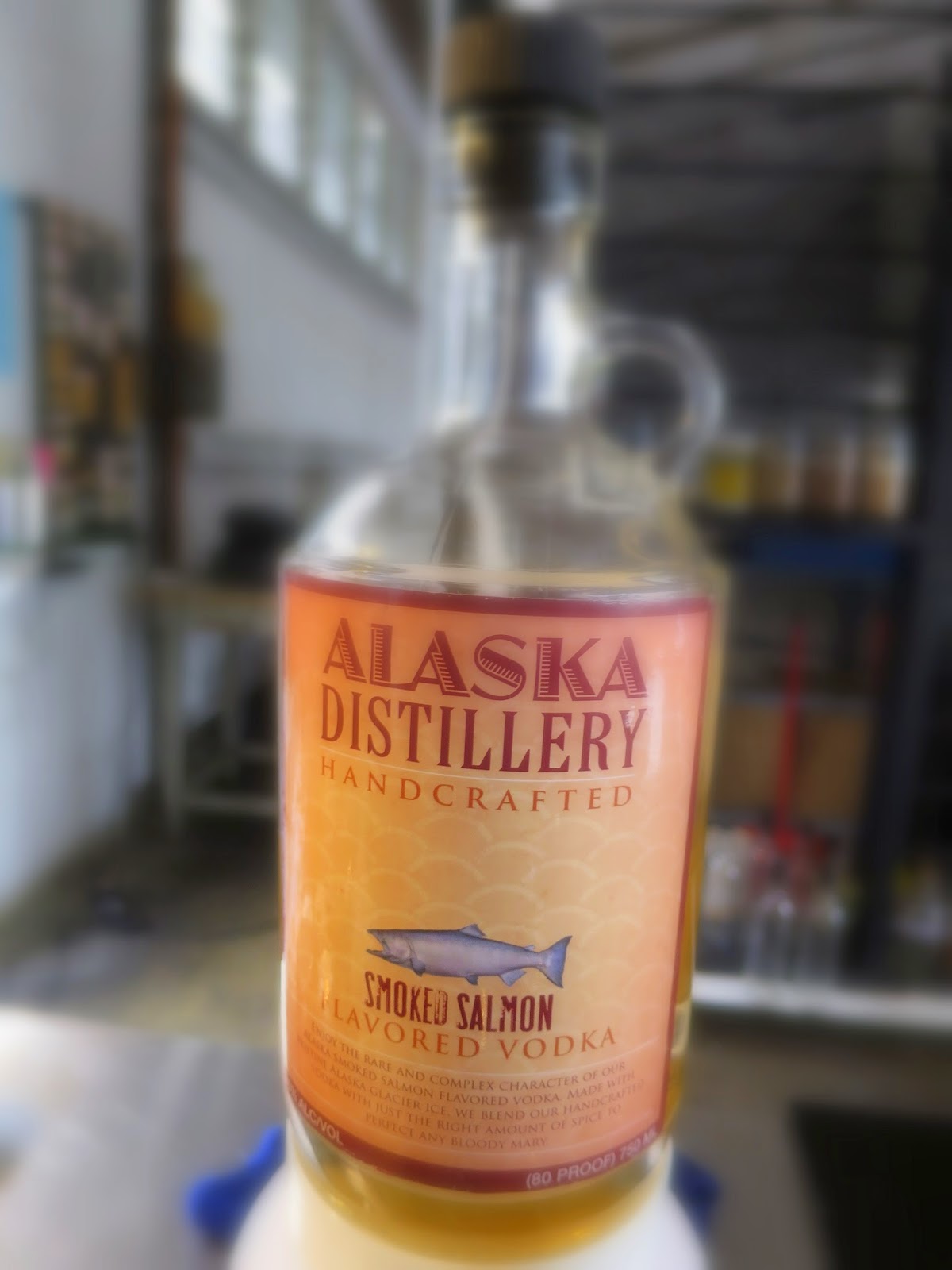 We were given a sample of this smoked salmon flavoured vodka.  The taste of the smoked salmon was rather distinct, almost as if you ate a piece of smoked salmon, and then washed it down with some vodka.  An acquired taste, no doubt, that smoky, fishy, boozy combination.  I liked it, but it's not something I'd actually ORDER to drink. 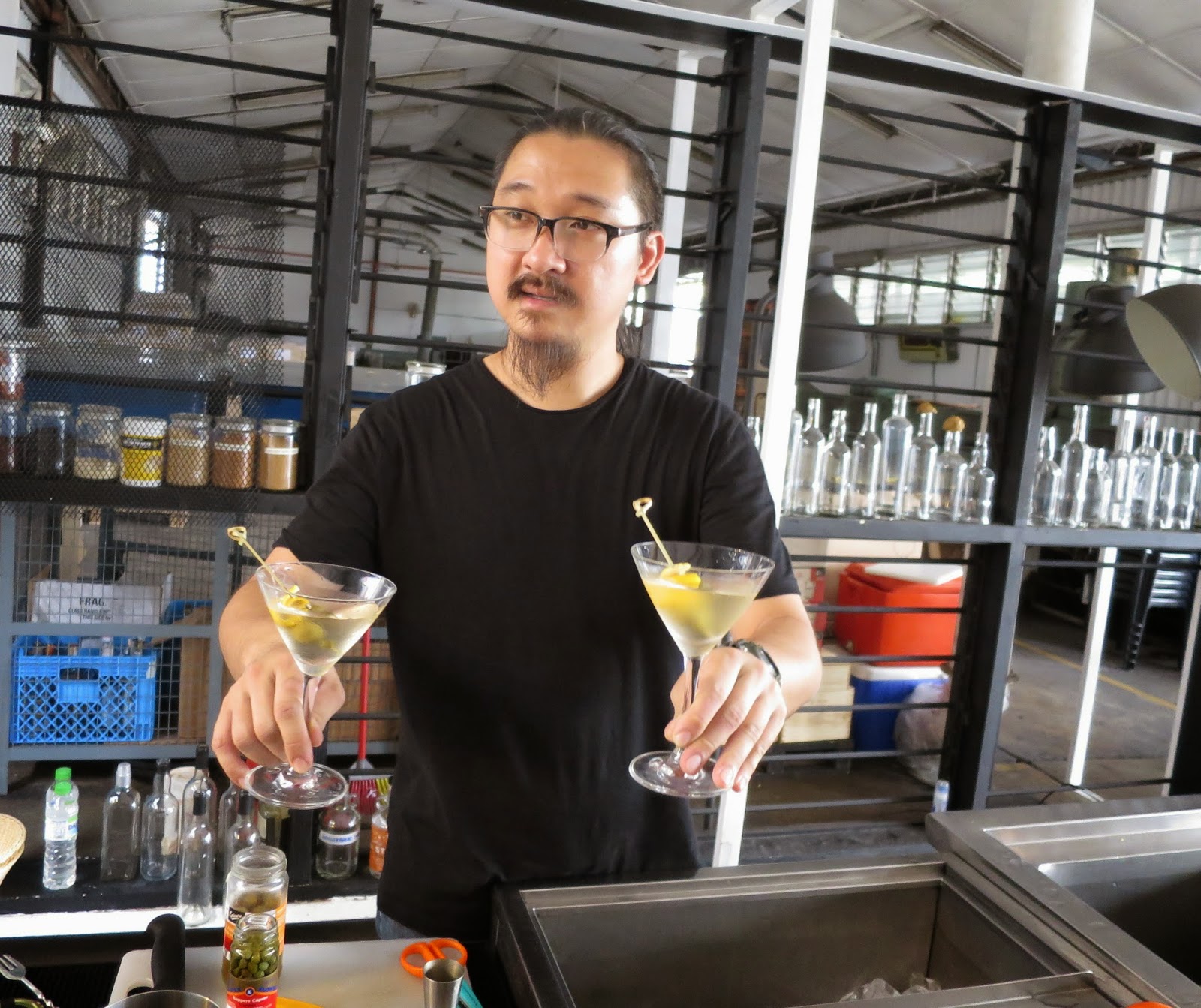 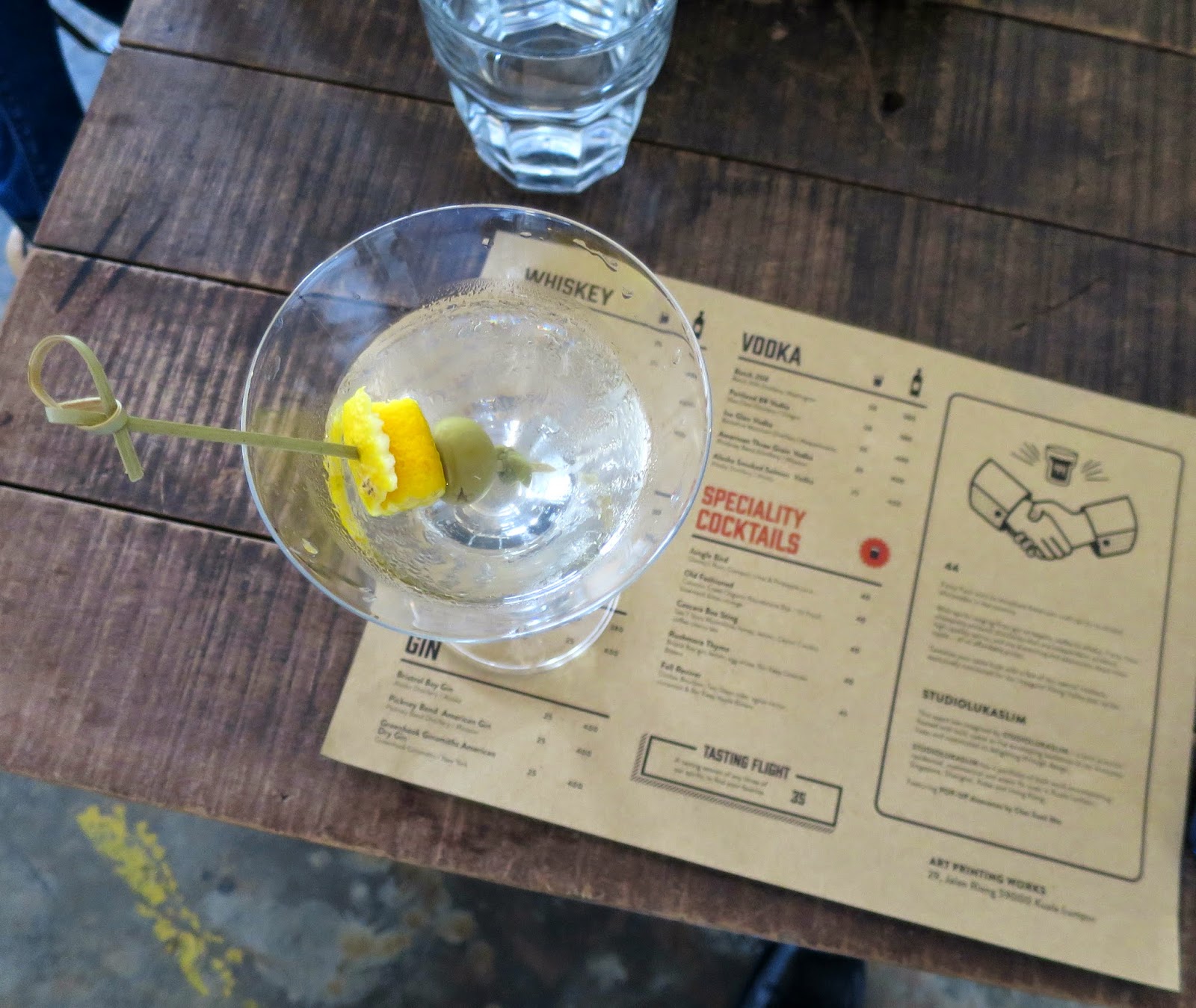 The first cocktail was a Vodkatini, not in the menu, but uses the aforementioned smoked salmon vodka.  Well, imagine a martini, slightly stronger than usual, with that whiff and aftertaste of smoked salmon. 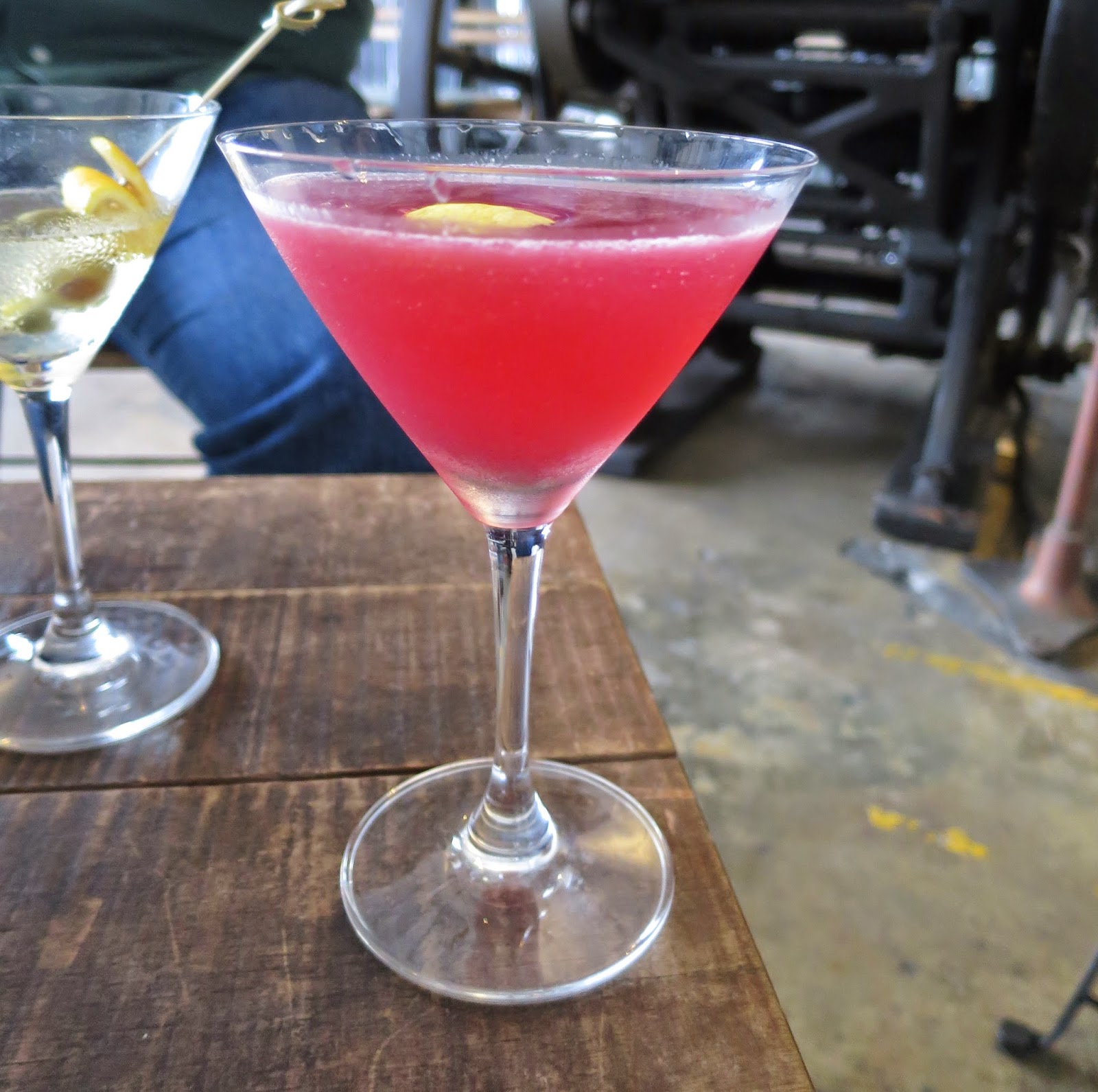 If drinks had gender, this is definitely a hot chick.  Sex and the City Meets Cosmopolitan.  Or was it the cosmo FROM Sex And the City? Whatever it is, it's definitely a chick's drink.  From colour to taste. 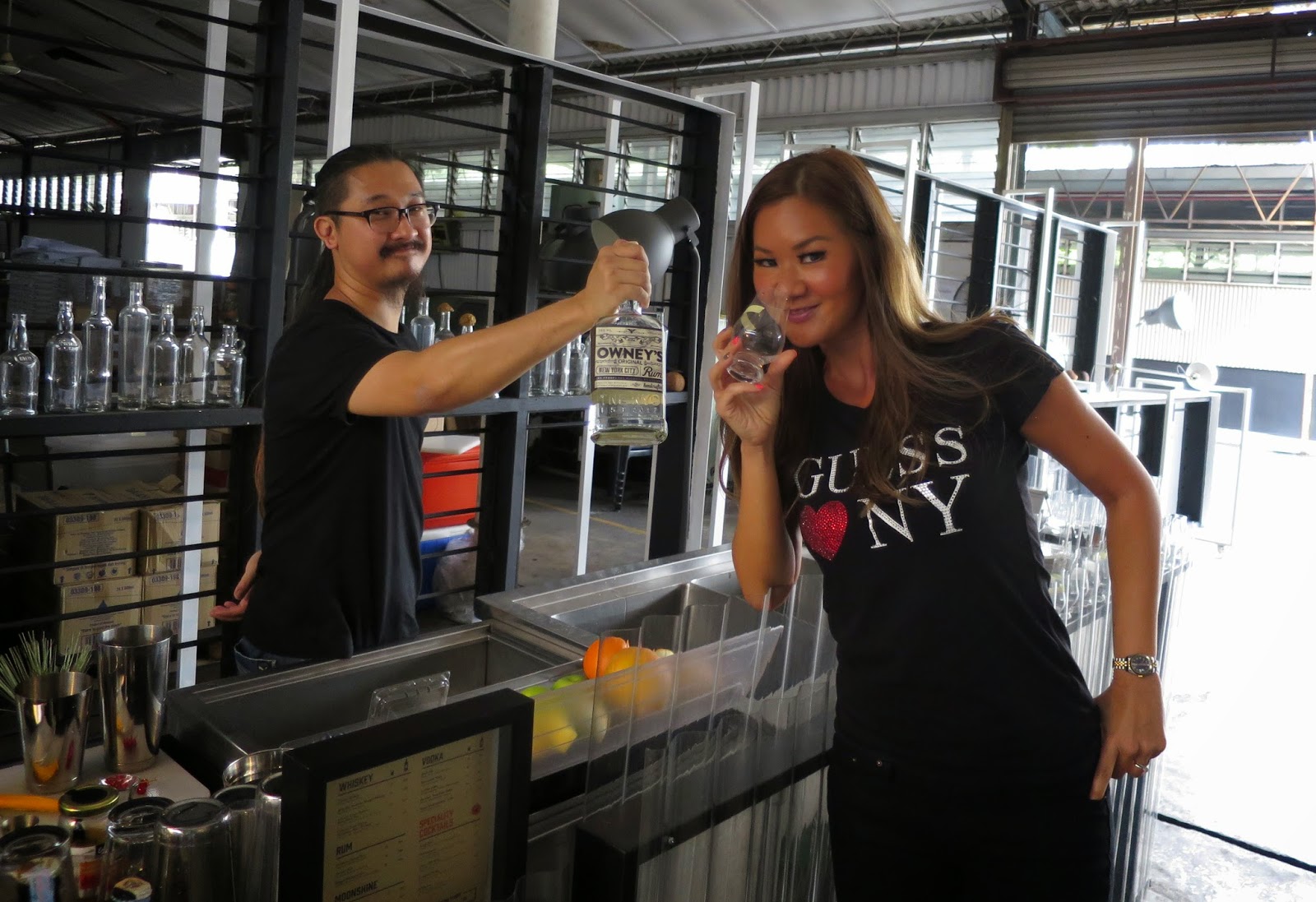 And speaking of chicks, here's one.... 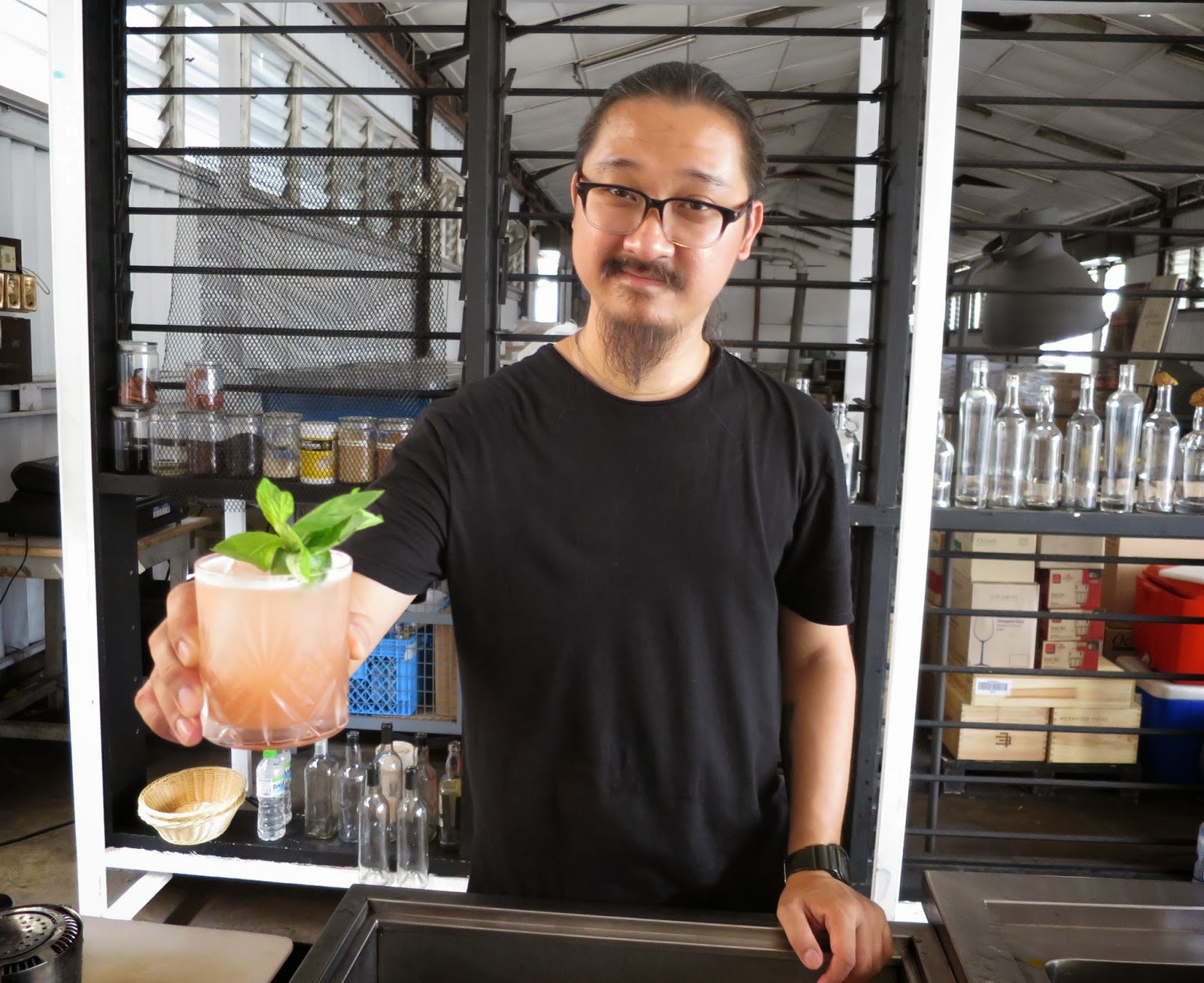 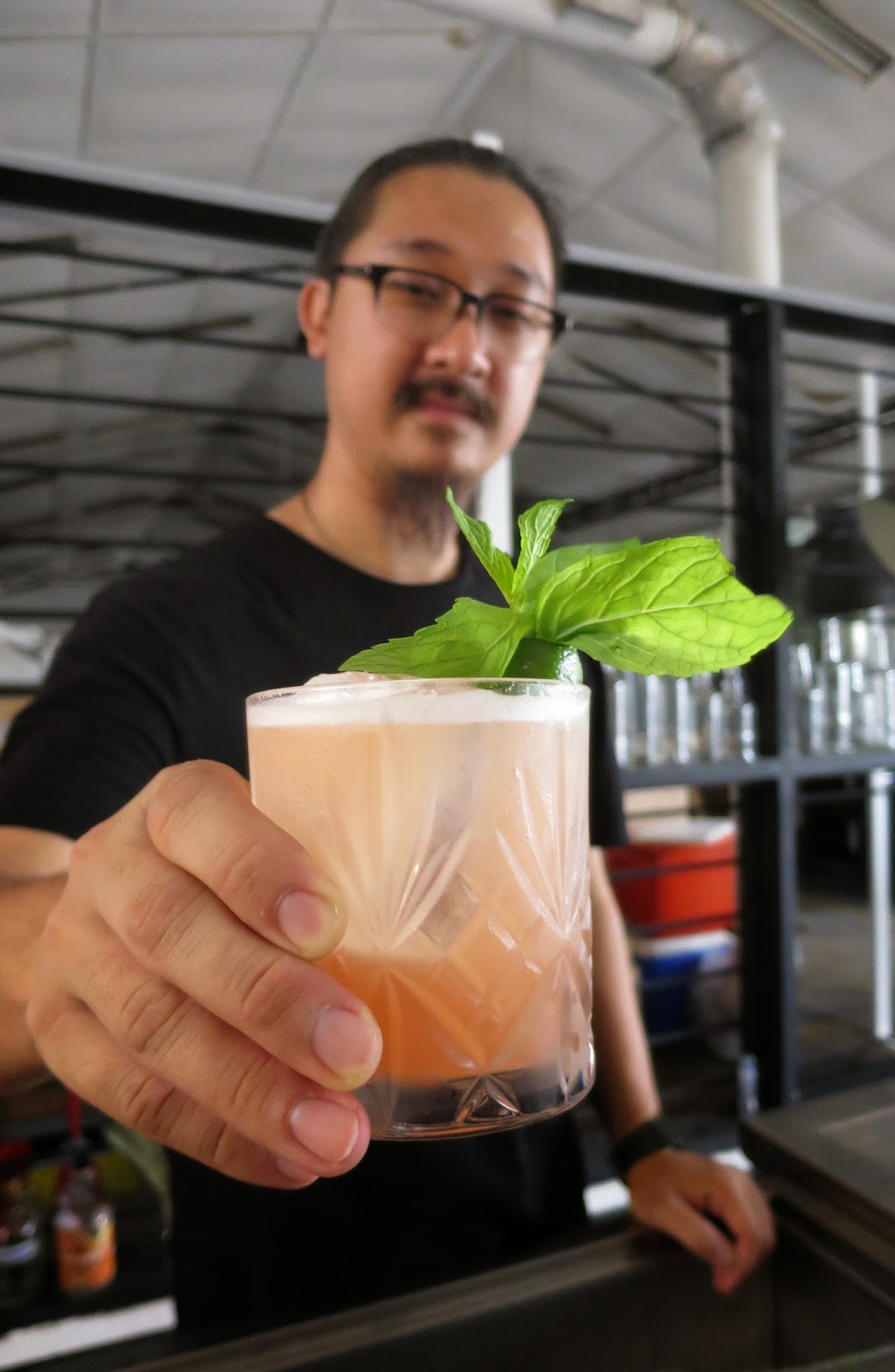 The Jungle Bird Campari...which I liked, coz of the slight bitter aftertaste.  Campari, wow, they used a mainstream drink, is always associated with the older generation, like my late grandfather, who enjoyed the odd Campari 7 Up which sounded so exotic those days. 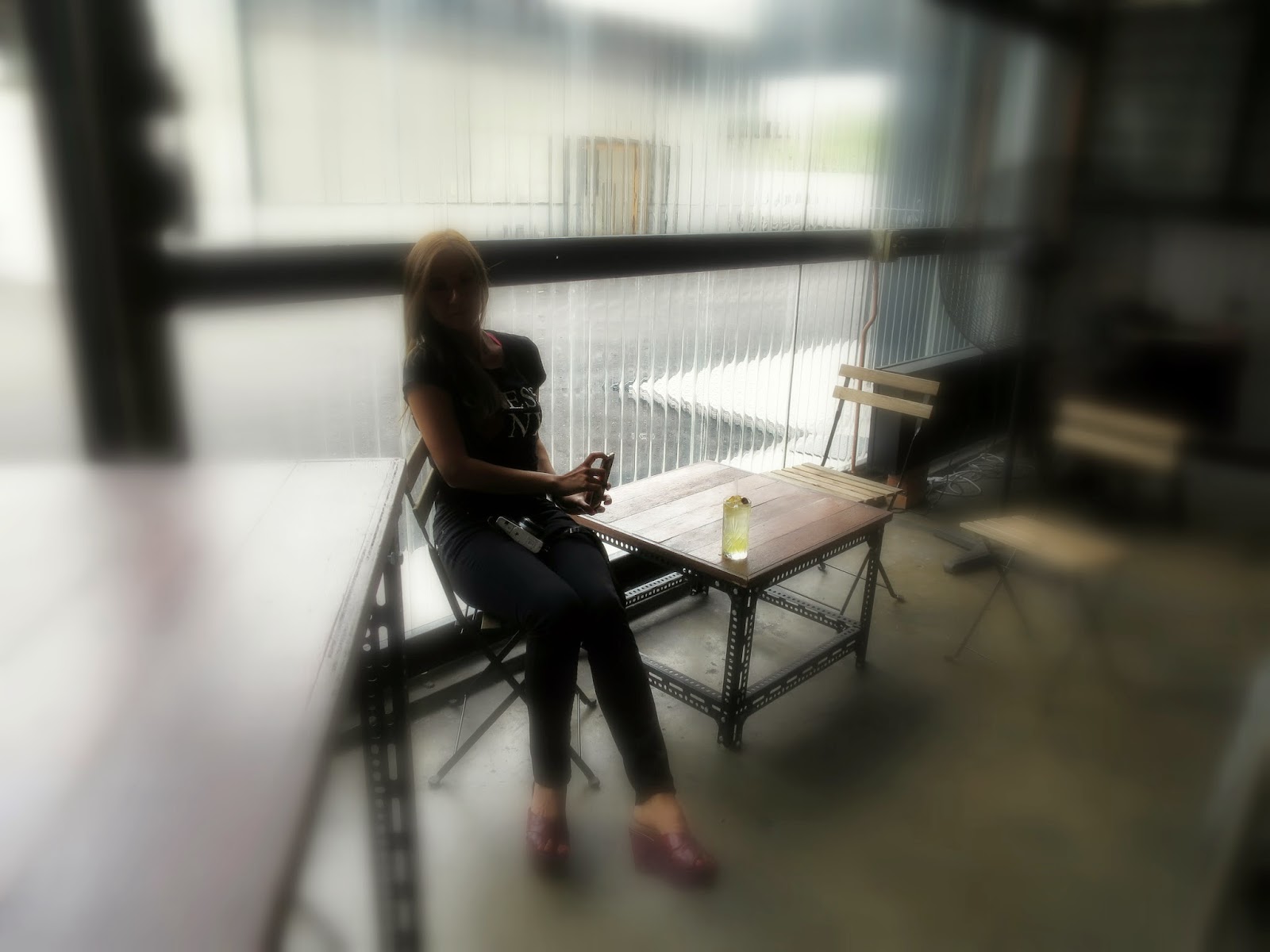 The silhouette of someone familiar. 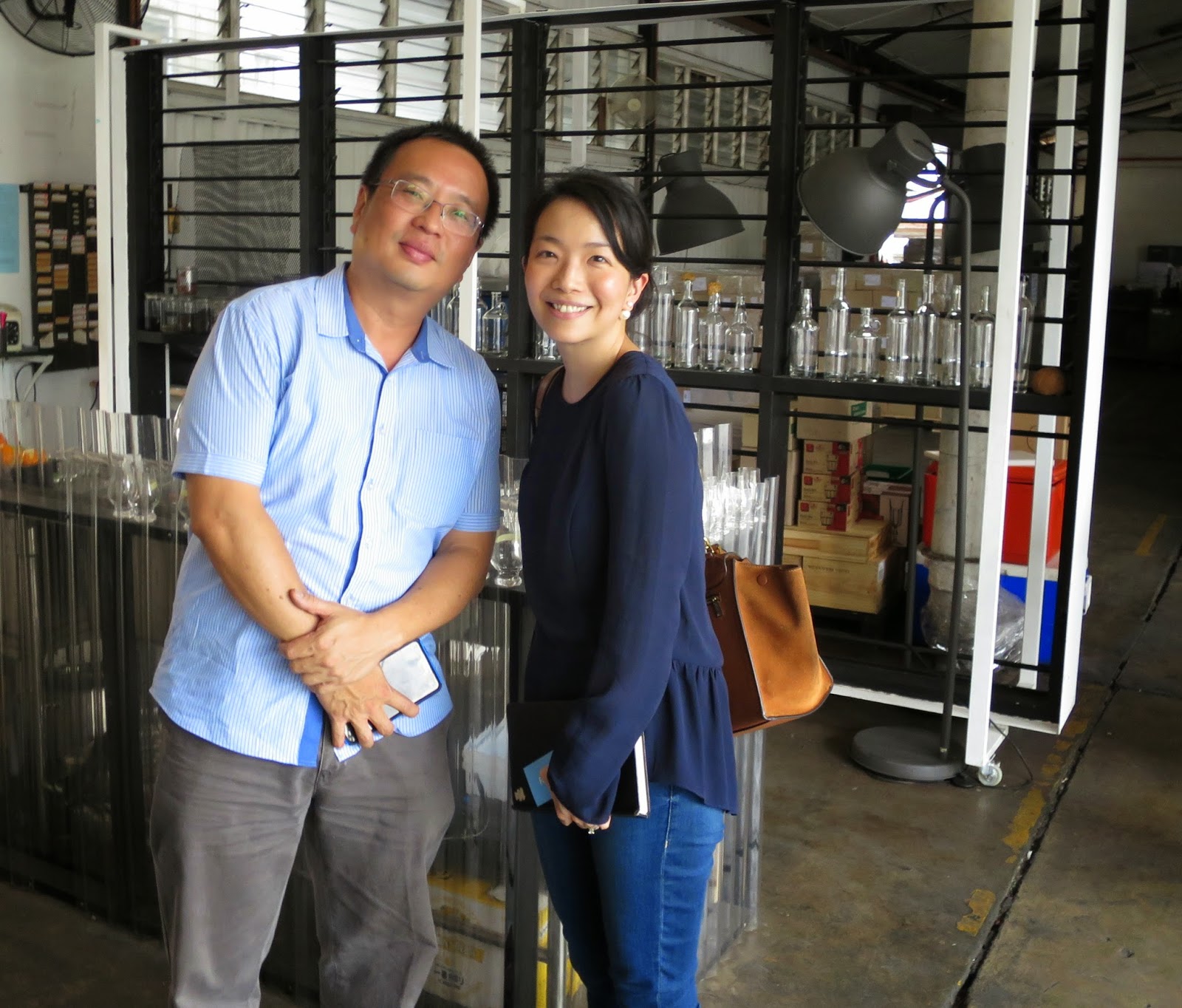 That would be Jasmine and me... 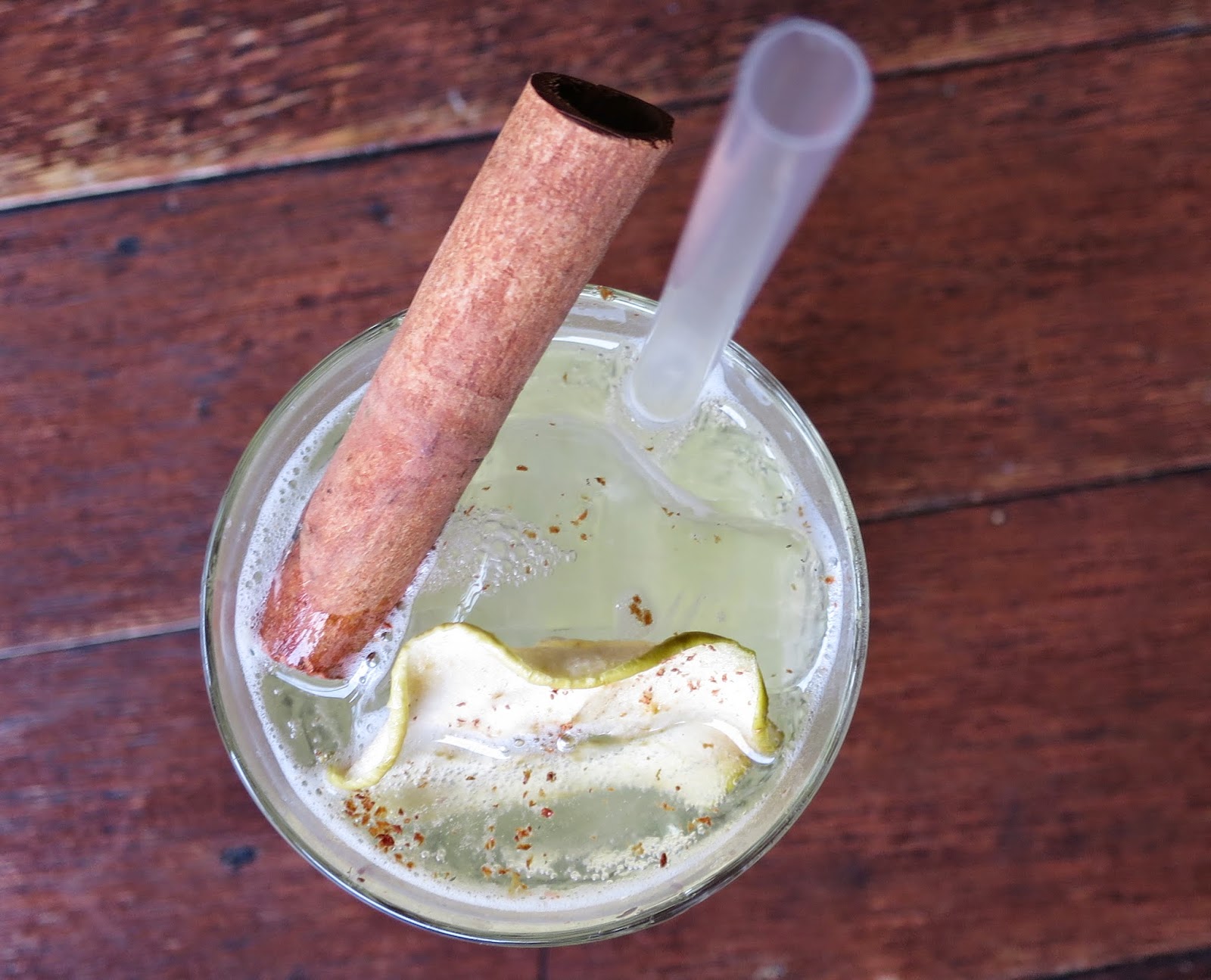 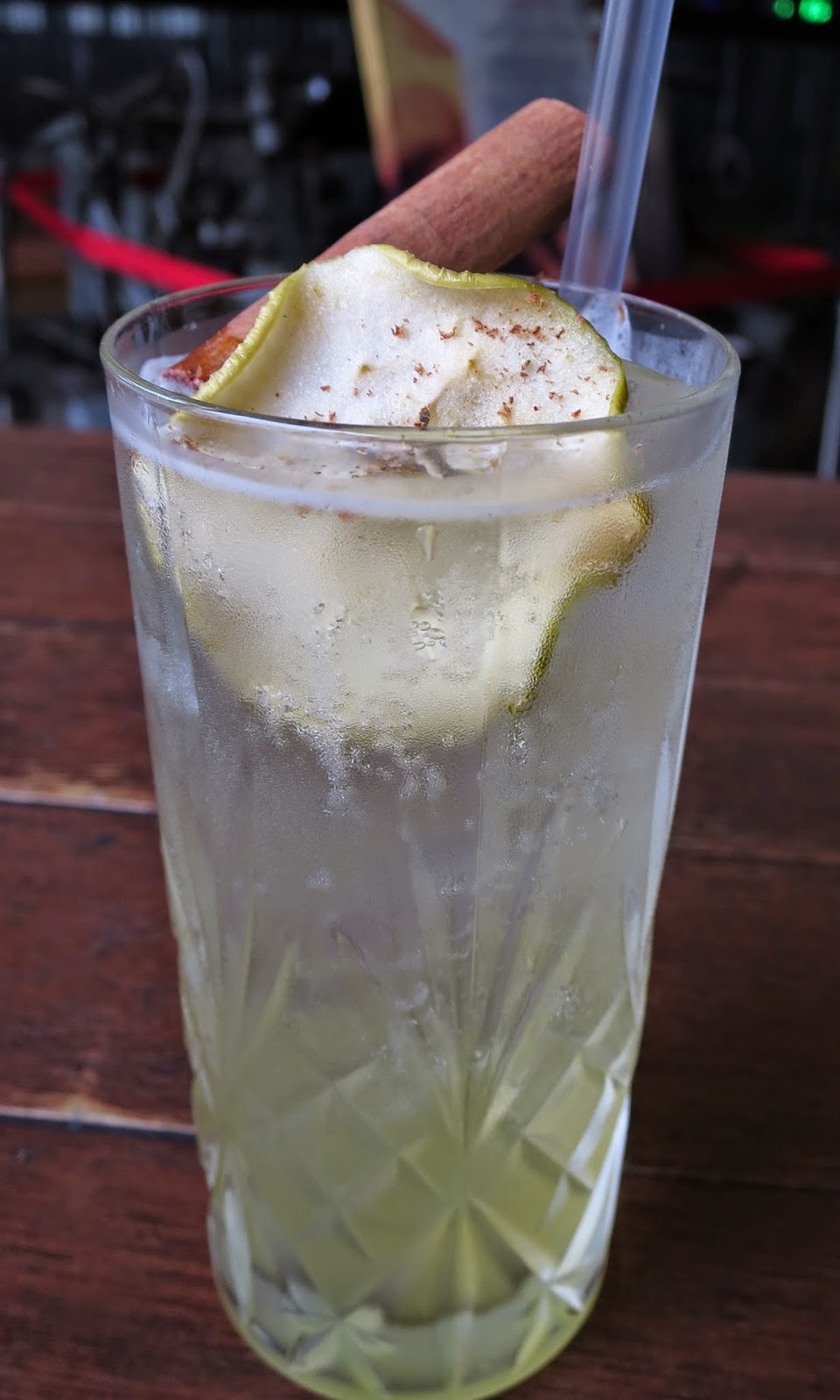 The Fall Reviver... Not sure if "Fall" is referring to autumn, or a FALL when you pass out after too many cocktails.  Predominantly apple based, with cinnamon and cider.  A rather refreshing drink, with slight hints of apple, etc. 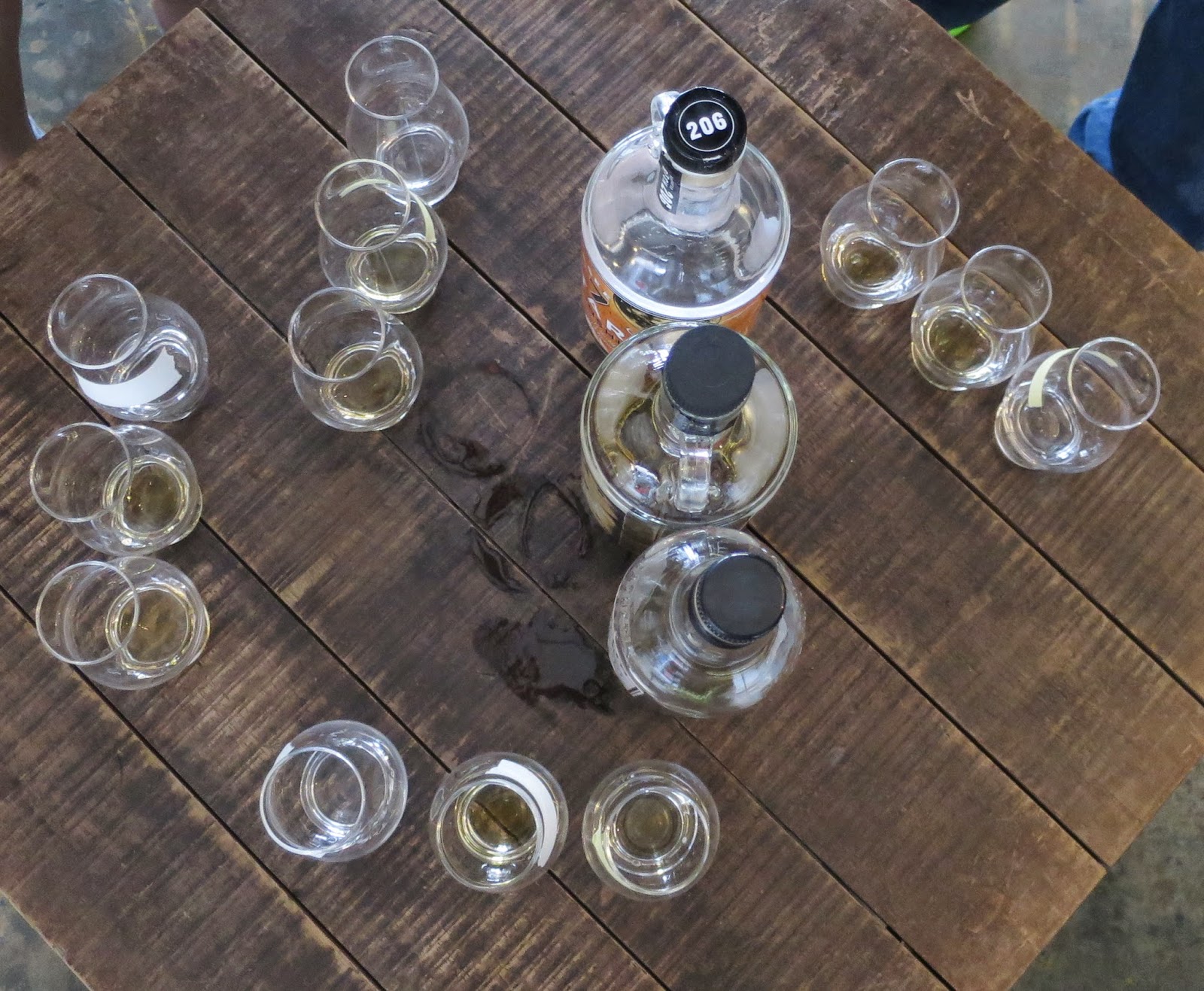 And finally, to ensure that we left with a buzz, a whisky tasting...with names like 7 Stars Moonshine....Alaska Outlaw and Catoctin Creek, we were sure we were going to have a buzz.
The Rye whisky would be the equivalent of single malt I guess, except it was single rye... 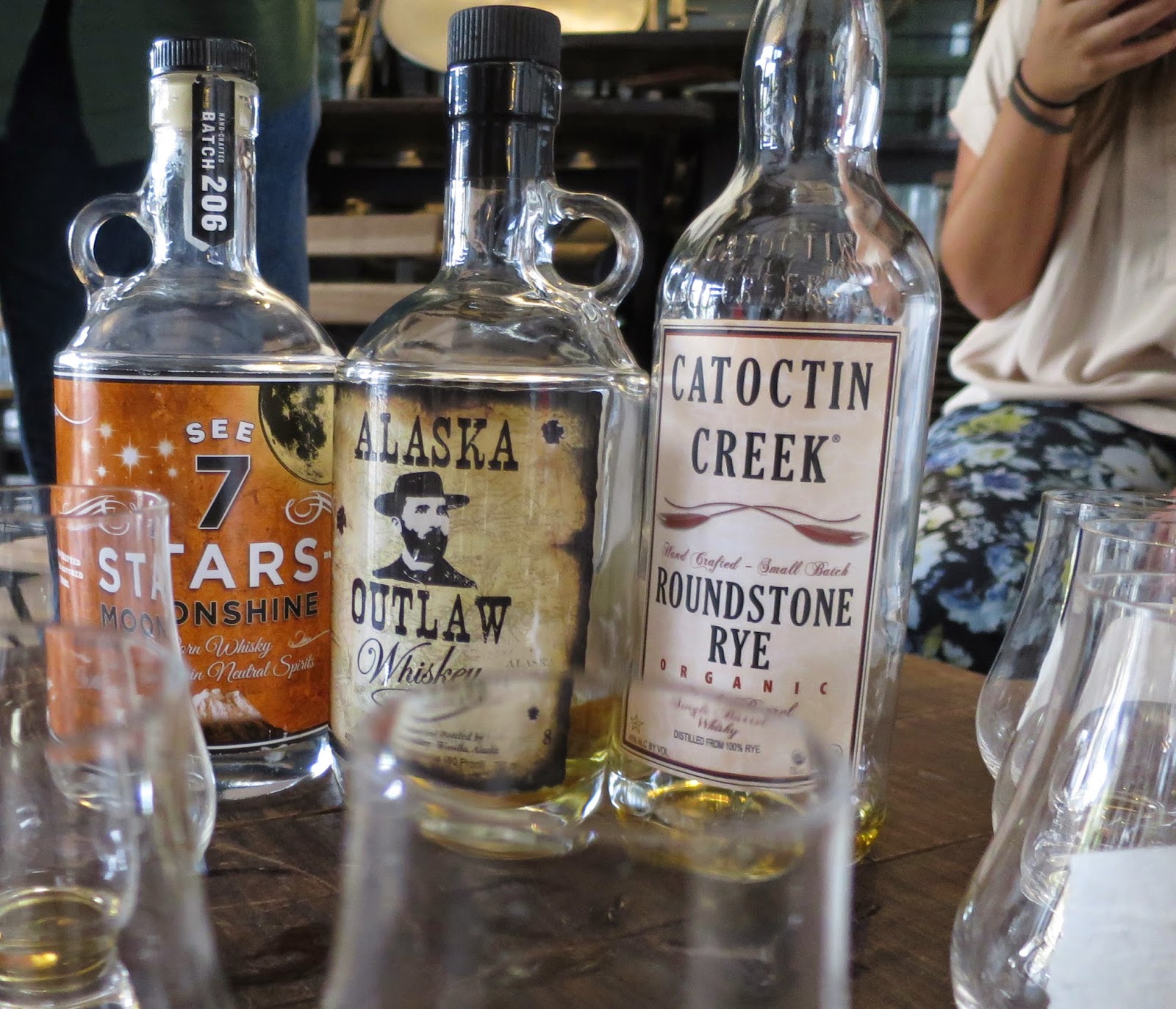 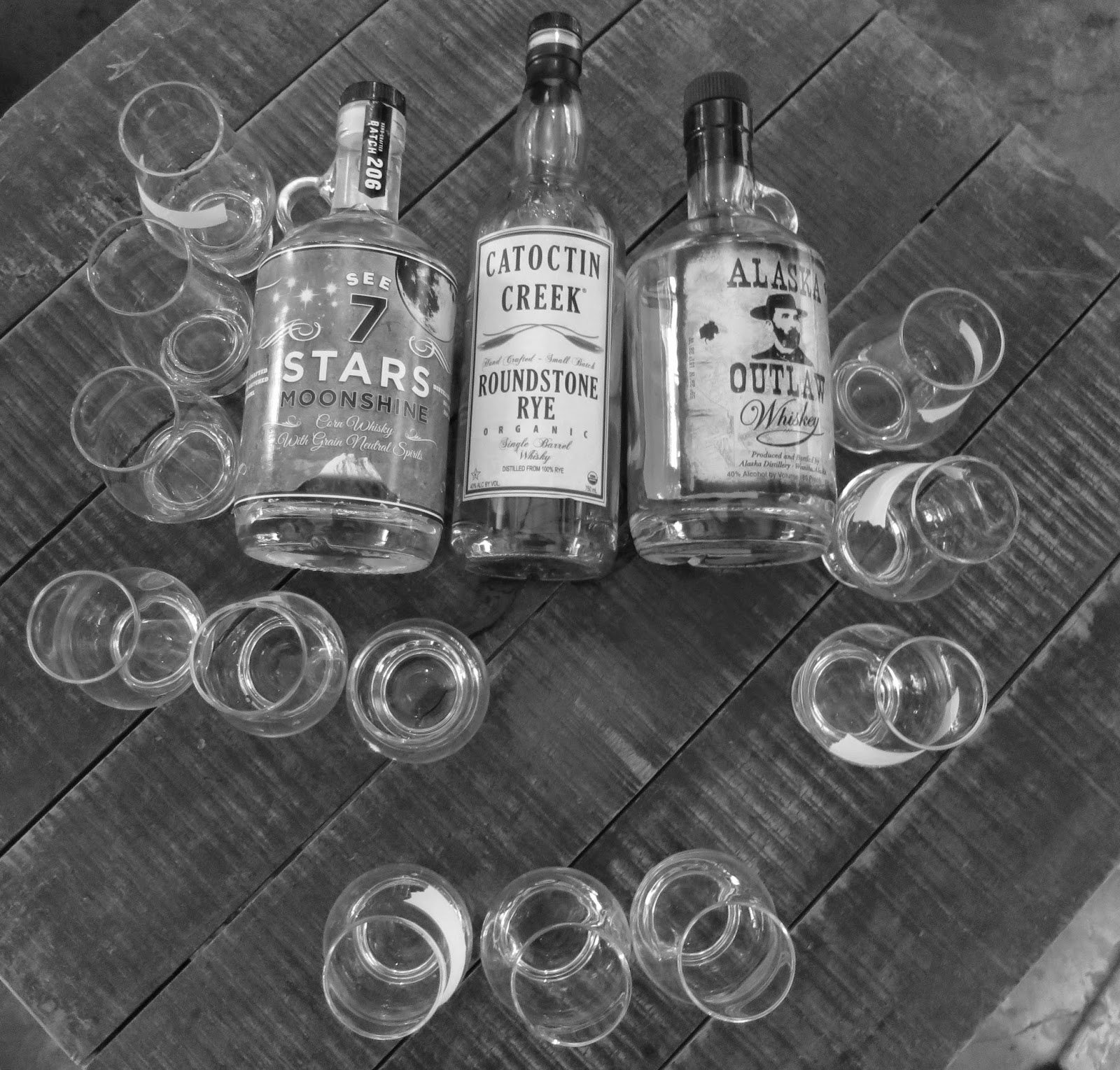 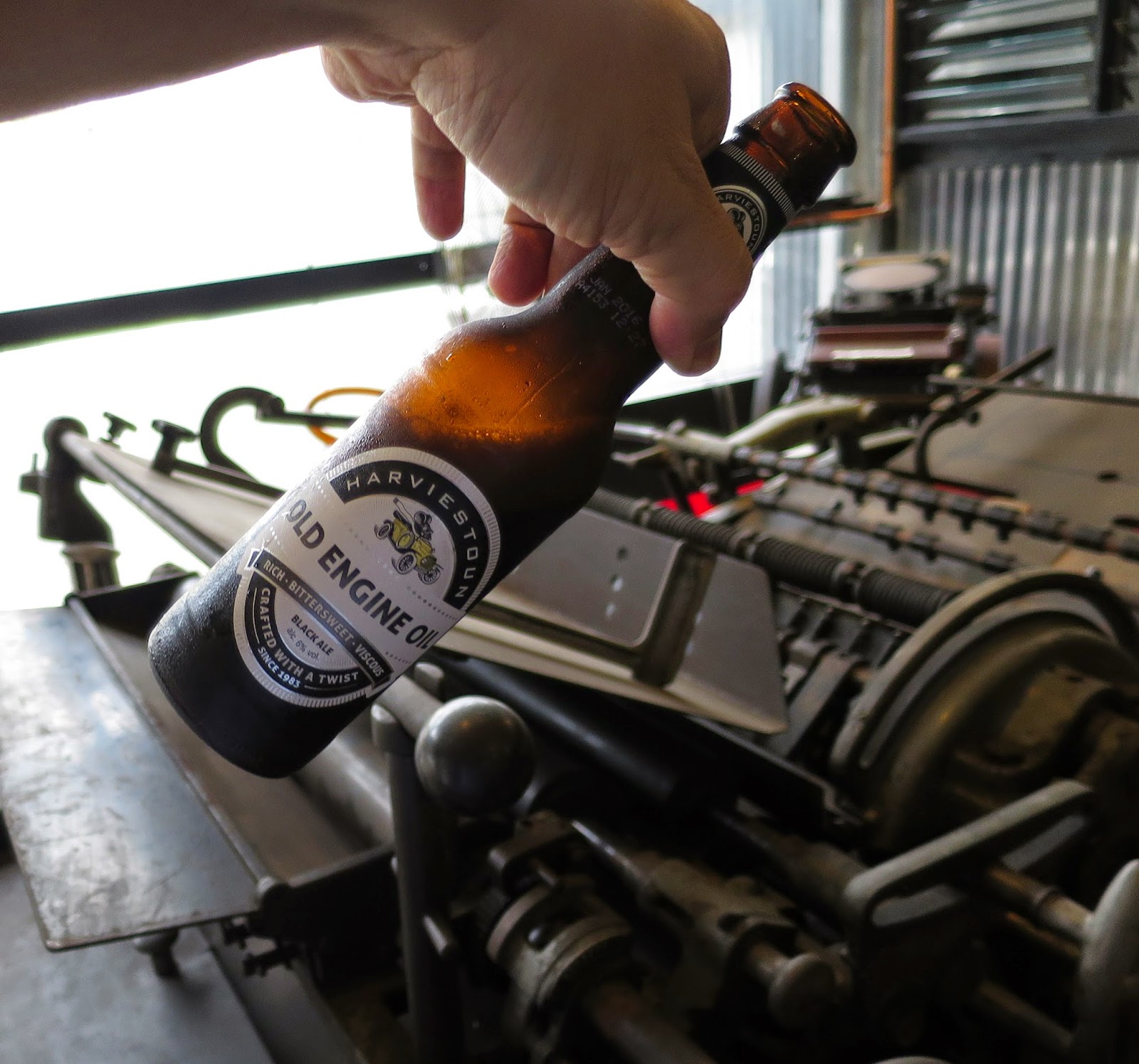 And just in case you were still not lubricated enough, some old engine oil should do the trick.  But this might not be on the menu either.  I liked it, like a stout. 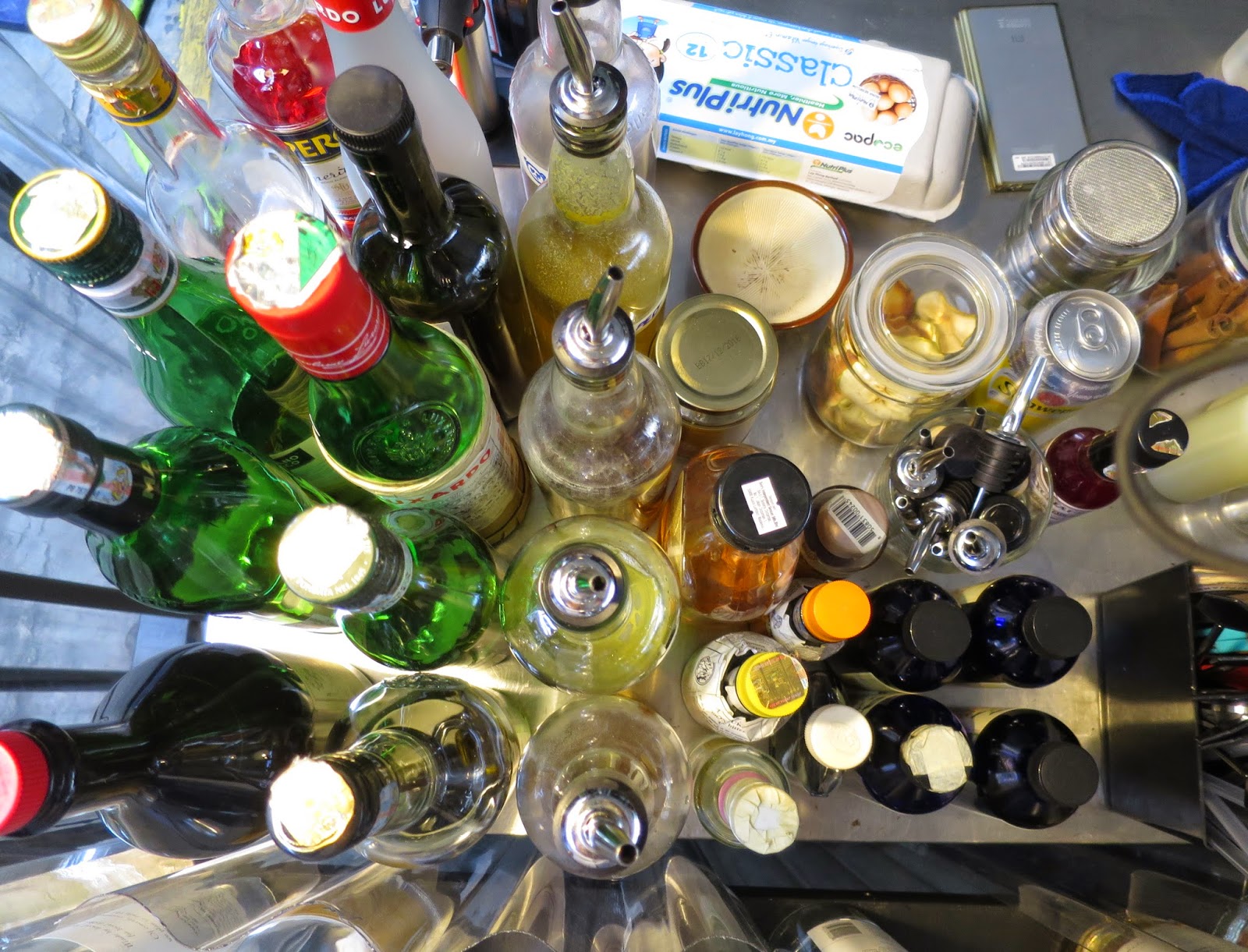 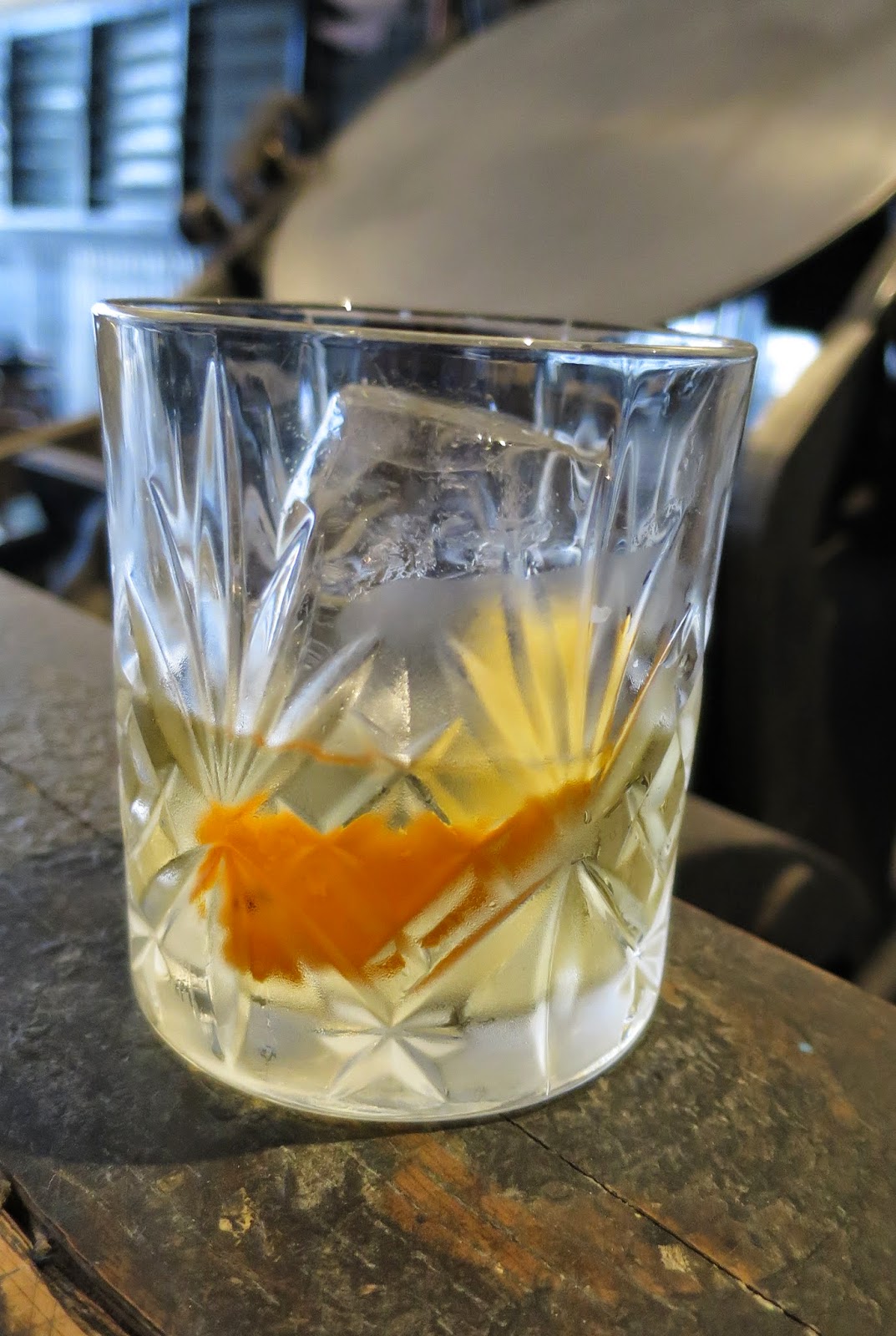 And one last one for the road, the Old Fashion....by this time, I forgot to take notes, but it's on the menu. 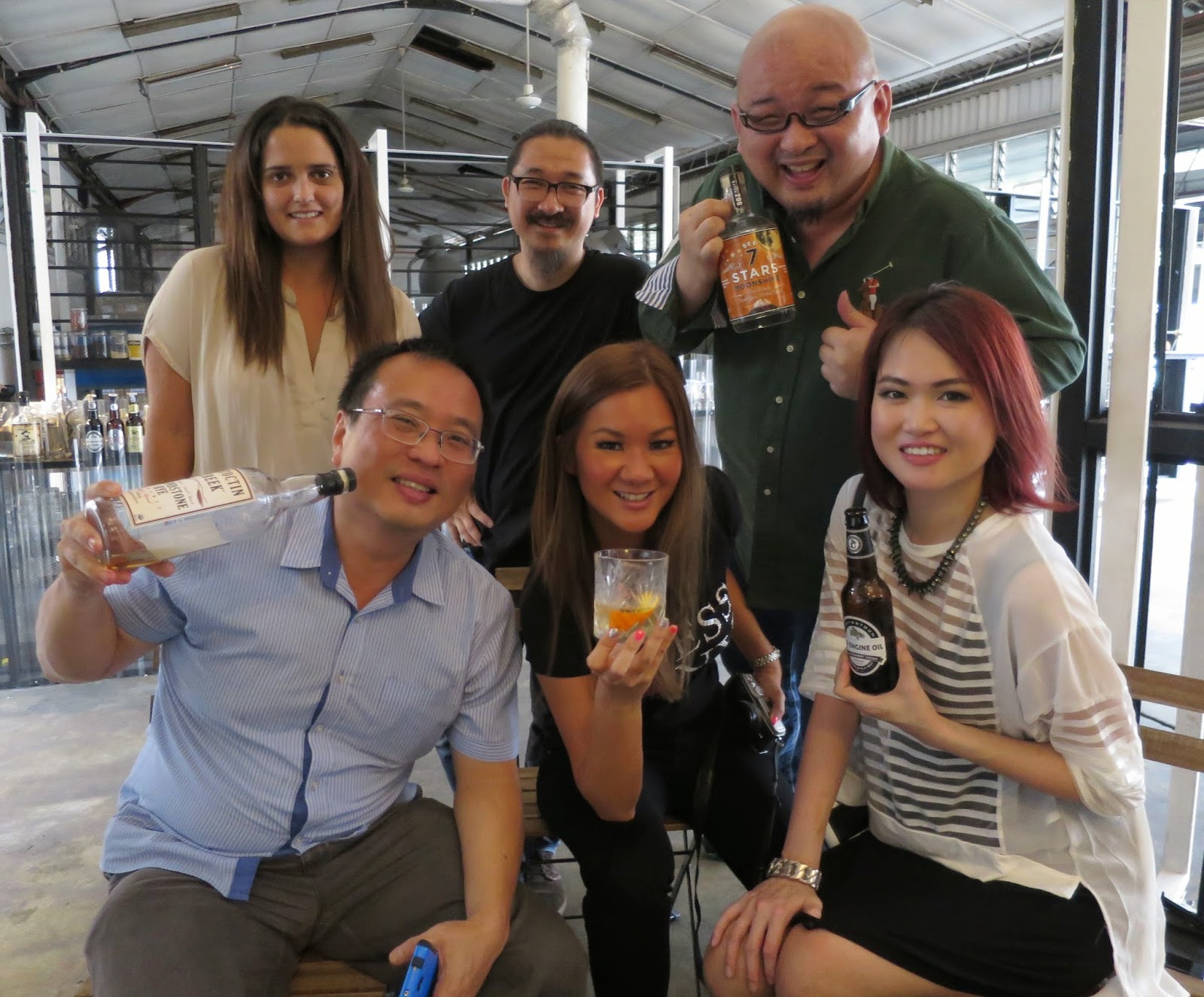 Cheers to the drinking posse!!!

The pop up bar opens from Wednesdays to Sundays, 5pm onwards.  Unfortunately, they do not serve food, which I think is a real pity, cos that REALLY limits alcohol intake, so I hope they will look into serving something soon.  Even some nasi lemak or ramly burgers would sell like hot burgers....

Yah I got that last foto too.. everyone looks so waste.. i mean rosy:P

where got look waste or rosy? we all look happy, that's all