One of the fabulous things about living in Malaysia is the CONTINUOUS, and I mean CONTINUOUS festivities that we are so blessed to be part of.  If we start from say, the New Year as a starting point, there's the lead up to Chinese New Year, which entails Yu Sang, and a host of overeating excuses, then there's Good Friday & Easter, okay, maybe not so much in these parts, then the Chang festival, somewhere along the line, depending on the lunar calendar, Ramadan with its wonderful array of Iftar treats, followed by Syawal, and Hari Raya Aidil Fitri, where the nation probably collectively puts on about 2.6 billion pounds, (as in pounds and ounces, not british sterling), then there's Deepavali, followed by Christmas... and somewhere in between, ....

MOONCAKE festival, or known as Mid Autumn Festival, which falls on Sept 27th this year.  Memories of playing lanterns though not knowing its signficance, burning offerings to the Moon, or thereabouts, grandmother's cooking, all form a phantasmagoria of flashbacks.

I shall state my stand now, that I am a traditionalist, and my favourite mooncakes are still the lotus paste with LOTS of egg yolks,...I don't mind if it's yolk with a hint of lotus... But sadly, the world has moved on, and a whole slew of new fandangled flavours assail the market, so in keeping with the times, one also has to move on.

The invitation for the first of the mooncake events came from Eddy of TT Group, and I knew it will be a fun night, as the TT Group functions are always (well, I've only been to one) rather carnival like in atmosphere, with lots of extra activities.  The launch was at Tropicana Golf and Country Club. 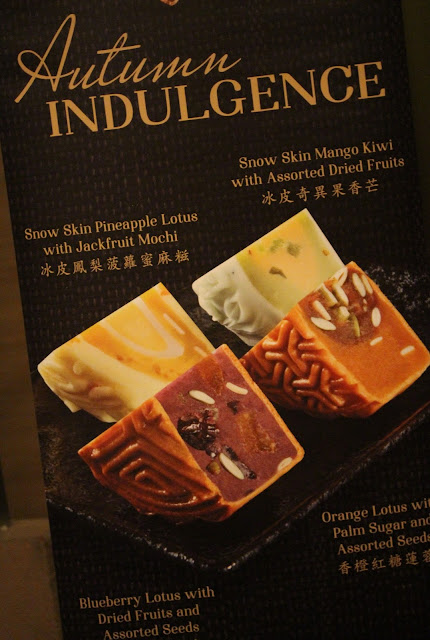 Supposedly GUILT FREE, (I really don't see how), their new range is an assortment of healthy fruity and nutty creations, by Chef Yiu Wing Keung. I guess once the King of Fruits is in the house, it is inevitable that it would hog all the limelight.... The Musang King mooncake, known as the Imperial Musang King Royale is made solely from fresh premium-grade Musang King Durian.  I have to concede that this was rather good, and we weren't given enough to try.  Priced at RM78.00 nett for a pair, this would be quite a luxury item to give away.  But the durian flavours are really very distinct, and the lovely snow skin enveloping that wonderful duriany paste, really is almost enough to convert me from the traditionalist flavours.

The other non duriany flavours cost RM18.80 per piece nett. 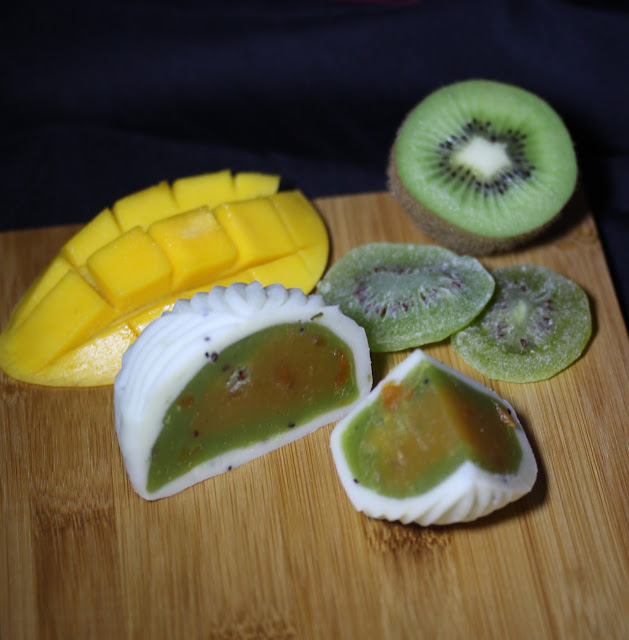 Snow Skin Mango Kiwi with Assorted Dried Fruits Refreshing with a tropical twist, sweet mangoes are paired with tart kiwi lotus paste and assorted dried fruits for added texture.  The green paste gives the illusion of Pandan, which is more common, and therefore when there is no pandan, it kind of confuses my little brain, as men are visual creatures.  I found this combination a bit on the sweet side. 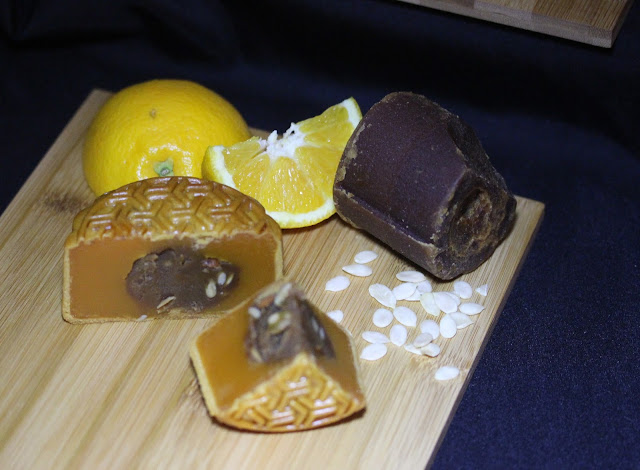 Orange Lotus with Palm Sugar - I quite enjoyed this, because of the zingy citrusy flavour, and the crunch of the nuts.  The palm sugar flavour is subtle, and complements the nuts while not overpowering. 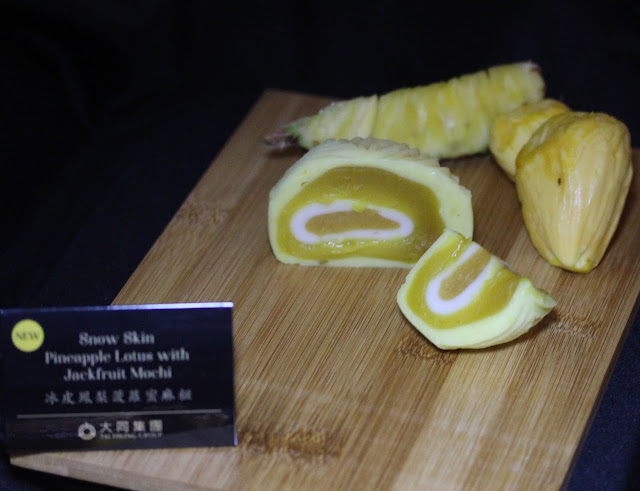 Snow Skin Pineapple Lotus with Jackfruit  Mochi.  I liked the mochi texture, which is chewy and full of body.  The combination of pineapple and jackfruit, by virtue of colour, works to the benefit of giving a summery cheerful colour. 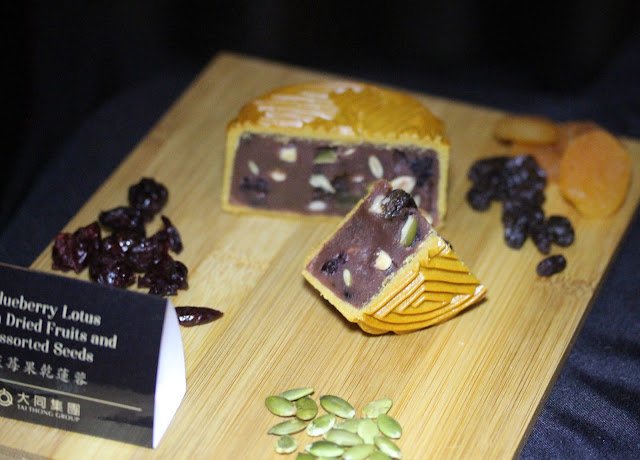 Blueberry Lotus with Dried Fruits.  Of course, blueberries' reputation as a superfoods and super oxidants might make this appeal to the health conscious eater, though I am not sure how much of that super qualities remain intact after it's been morphed into a mooncake. 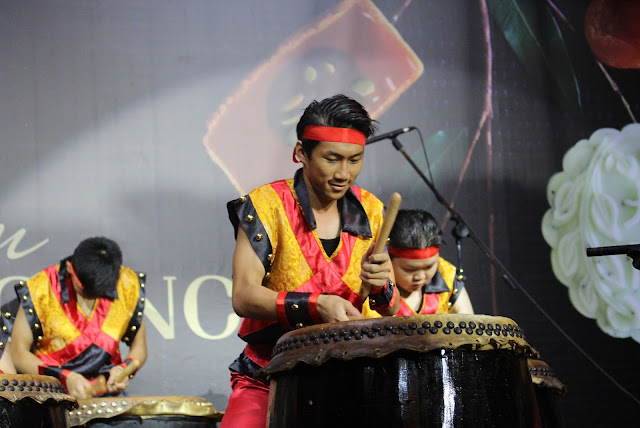 As predicted, a carnival atmosphere prevailed, with these chinese drummers to entertain and a man walking on stilts... 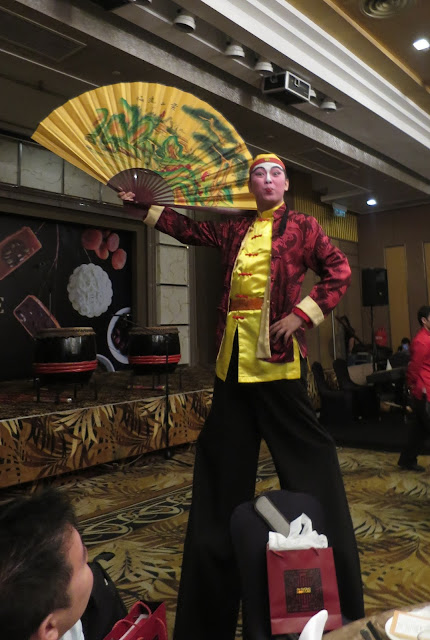 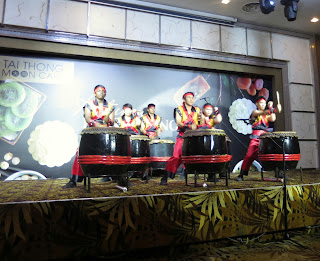 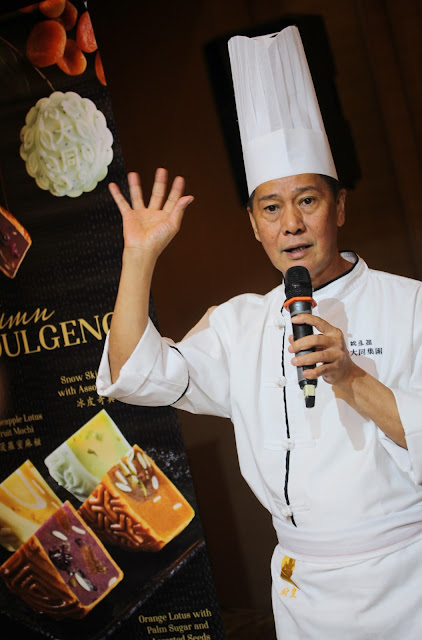 Chef Yiu introduces his mooncakes and does a short demo of the snow skin mooncakes, making look as effortless as a kid churning out playdough from a mold. 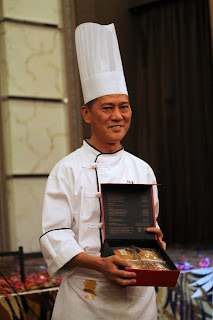 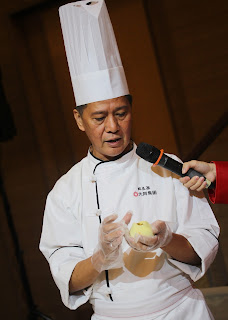 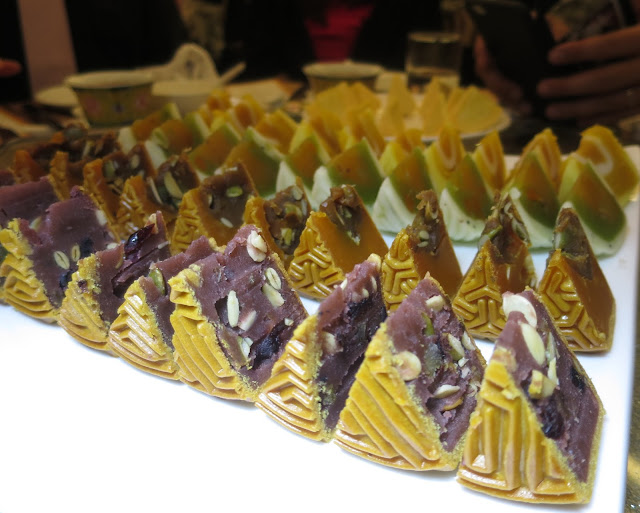 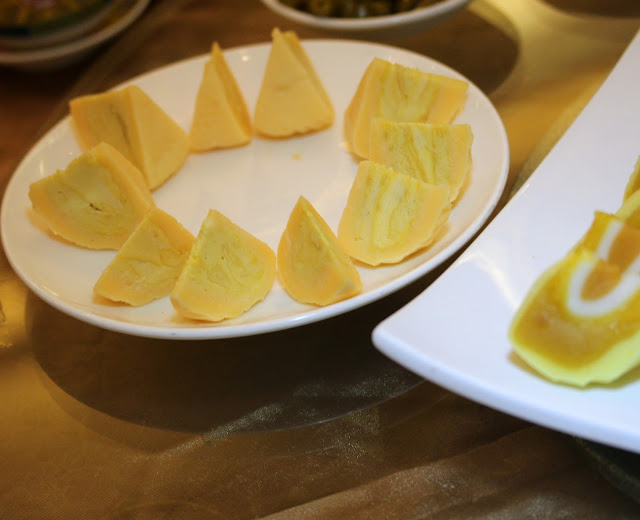 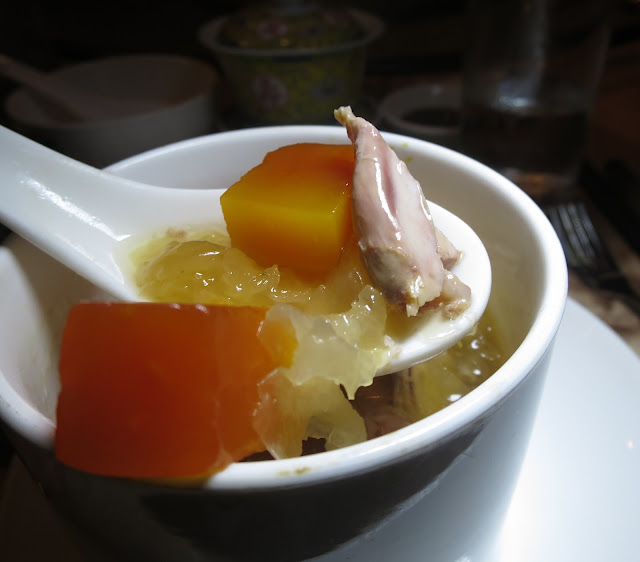 After having our fill of mooncakes, (the organizers made sure we got a kao kao taste of the mooncakes before feeding us dinner), we started with a lovely papaya snow fungus chicken soup, which was deliciously hearty.  The kon poi gave the requisite flavour. 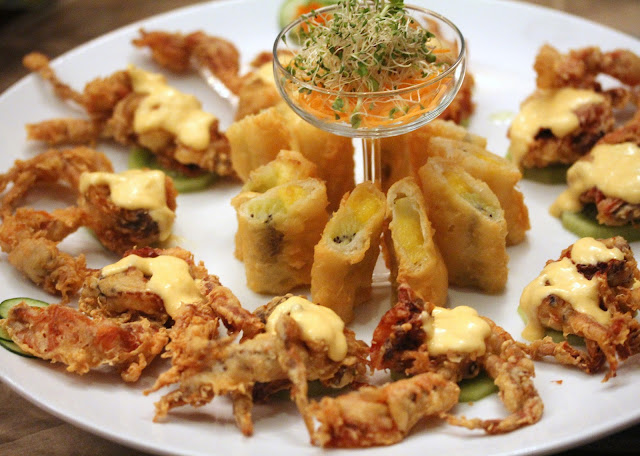 Crispy Soft Shell Crab with Mango and Kiwi Sauce.  Oh, basically the dinner was also a play on the ingredients used in the mooncakes, hence the mango and kiwi combination.... 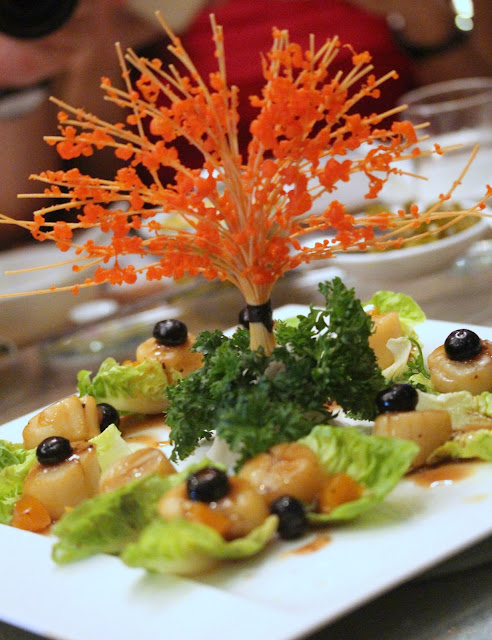 A wonderfully attractive dish, pan seared scallops with blueberry and apricot, almost like a Garden of Eden like scene, with the tree of life in the centre...the tangy sweet sauce was a good combination for the marine brine of the scallop. 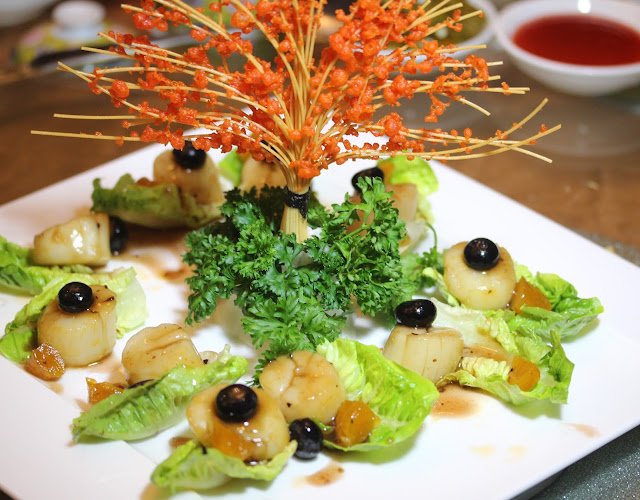 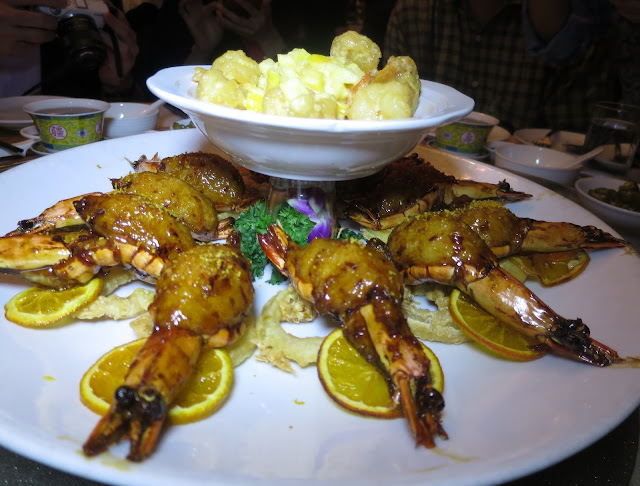 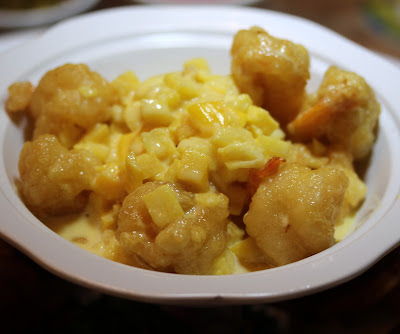 I preferred this dish, which was less striking compared with the stuffed prawn aesthetically, but taste wise was more striking.  The tang of the pineapple and the sweetness of the jackfruit give it a nice balance with the savoury battered prawns. 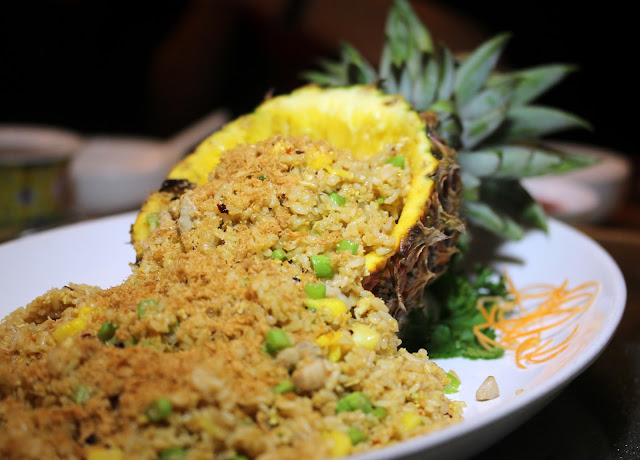 The last course, the pineapple fried rice with vegetarian floss, was certainly a good filler, for any of us who were still hungry. 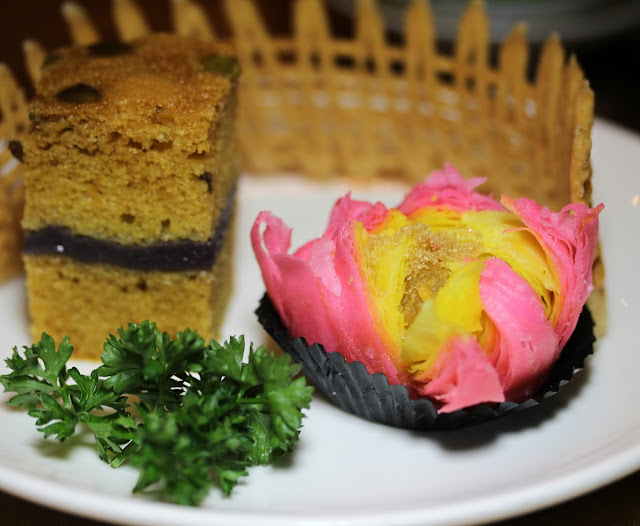 For dessert, this peony puff pastry with Pineapple and Jackfruit was really quite special, despite the horrific pink colouring that made it look like something from a little girl's story book.  The buttery fluffy pastry, melt in the mouth with the lovely filling was really quite an unexpected treat.  The steamed sponge cake with blueberry and cranberry filling was errr..... not my thing. 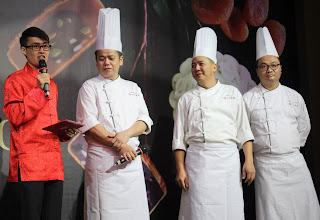 The line up of the Chefs, and finally, the Dim Sum Chef, who was responsible for that lovely peony dessert. 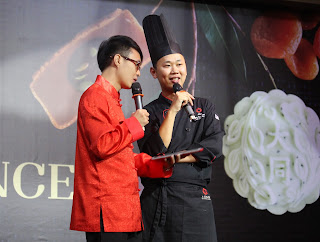 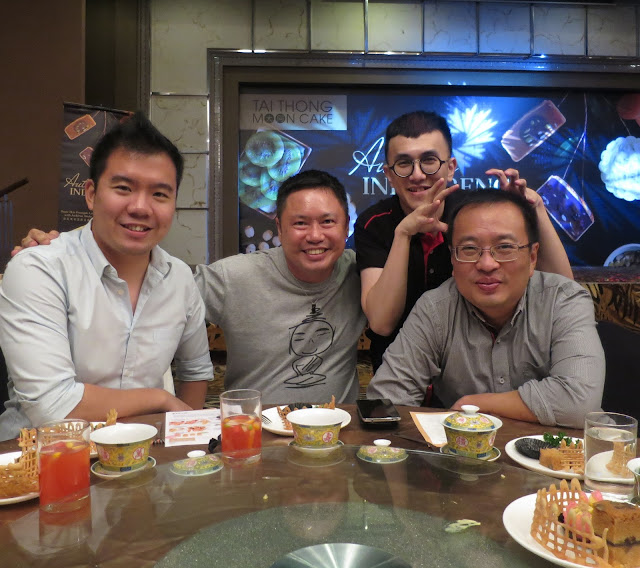 Twas nice to make some new friends as well.

For those who are interested, this is the entire menu: 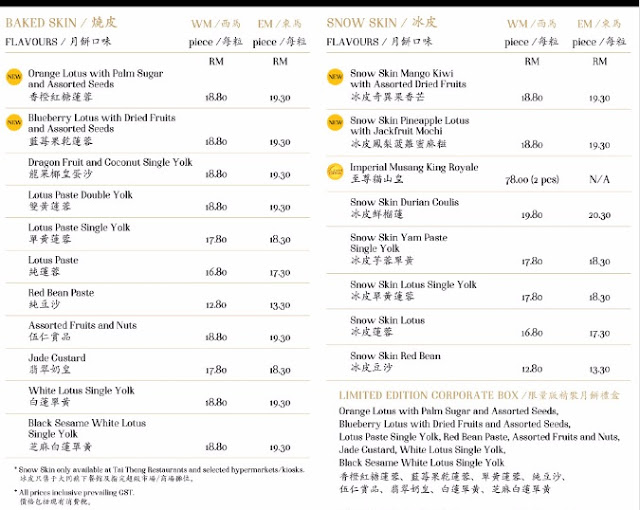 Posted by fatboybakes at 1:27 PM