I always enjoy eating at the Dynasty Chinese Restaurant in Renaissance KL, because, WELL, the food is consistently good.  It was with eager anticipation that I came for their CNY review.  By eager anticipation, I mean with empty stomach, and arriving on time, so as not "miss out".  Chef Kok Chee Kin's menus are always something to look forward to anyway.

From the myriad sets that are available for the choosing, we were given the Fortune Set, priced at RM2088 nett per table of 10.  Over and above that, we were lucky enough to have a special "guest star appearance" by a dish that truly is one of the piece de resistance of the night. 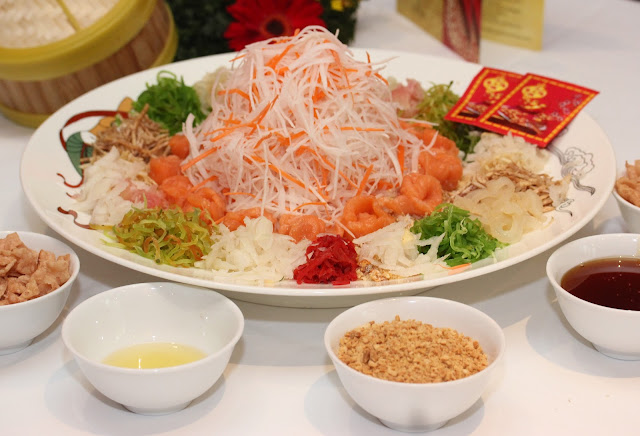 Despite "lou sang" being done to death during the CNY Period, I have to say that there is a certain amount of bon viveur in celebrating and communing over this dish.  For starters, I can't think of any dish that requires communal participation, in chinese cuisine.  Steamboats don't really count, cos that's more like everyone for himself kinda thing. 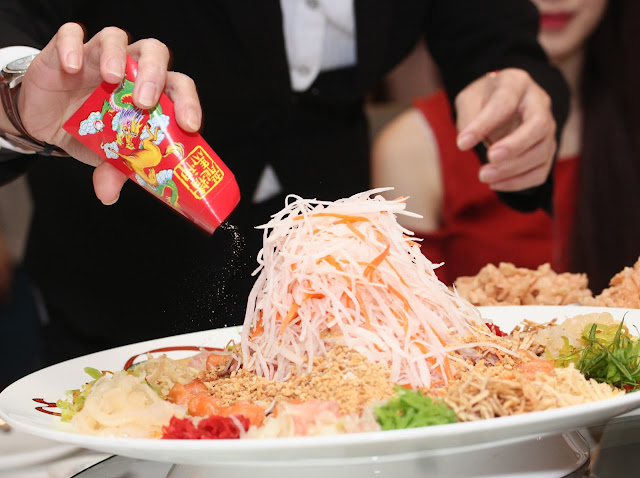 The tossing of Yee Sang is an action packed routine, starting with the various condiments being strewn over the dish, much like an elaborate salad dressing.  Whilst this is done, utterance of prosperity, good health and all things good are said, usually by the server, and this is again regurgitated during the communal toss. 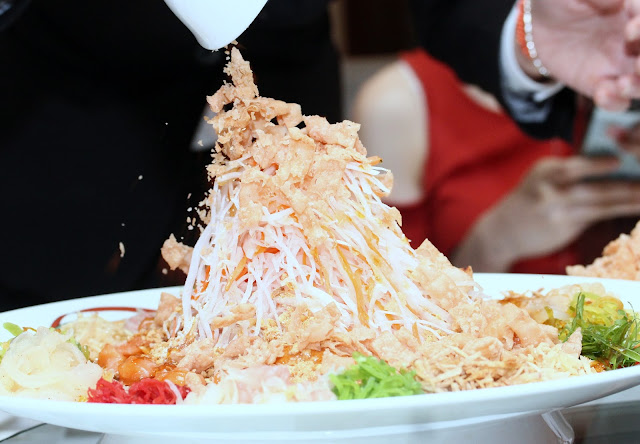 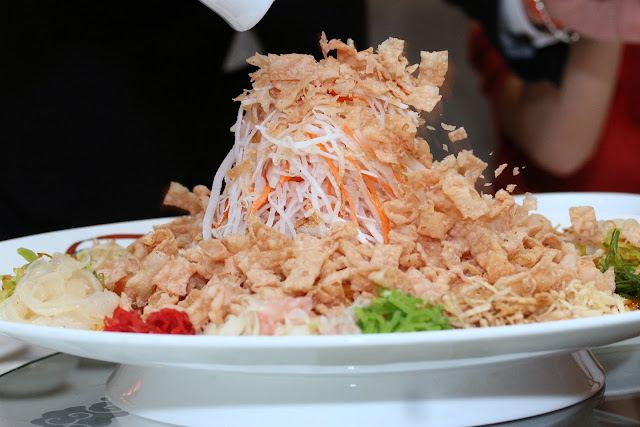 And there we have it, lift off.....At my age, the most important auspicious utterance is probably SUN TAI KEEN HONG....good health.  Of course the Sang Yi Heng Loong (business prospers) is a close second. 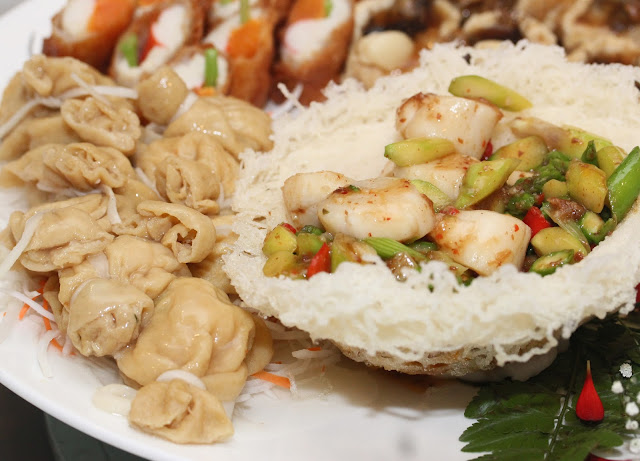 The Fortune Combination Platter, a generous potpourri of plump scallops, delicious moneybags, and the usual deep fried fritters with salted egg yolk, and an elaborate vegetable sculpture ...this particular one of the longevity old man I think. 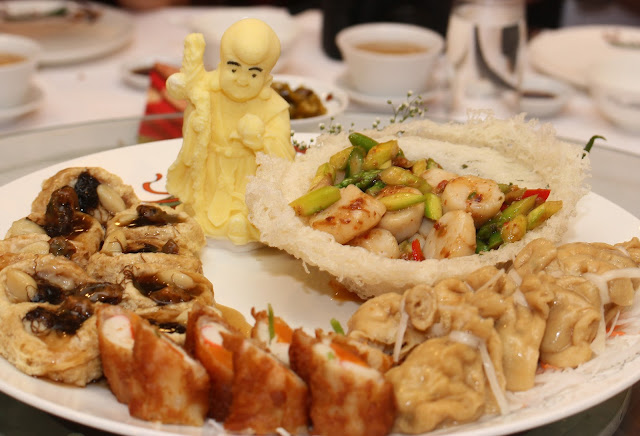 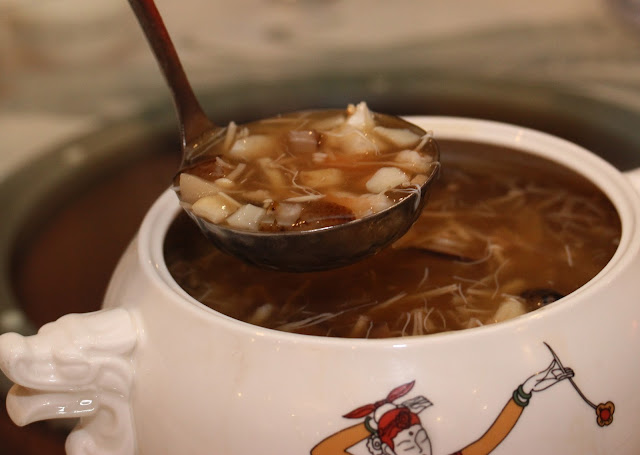 Ying Yang Scallop Soup With Dried Seafood...The flavour of the bamboo pith was a bit overpowering, which some of us didn't care much for.  I do know of some who do like that pungent flavour.  But I think it would be wise to tone it down a notch as I felt it overpowered the goodness and sweetness of the seafood broth. 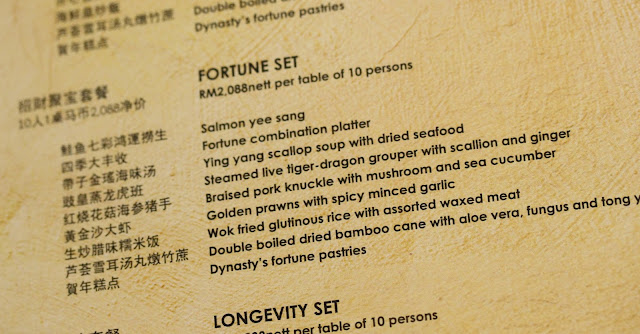 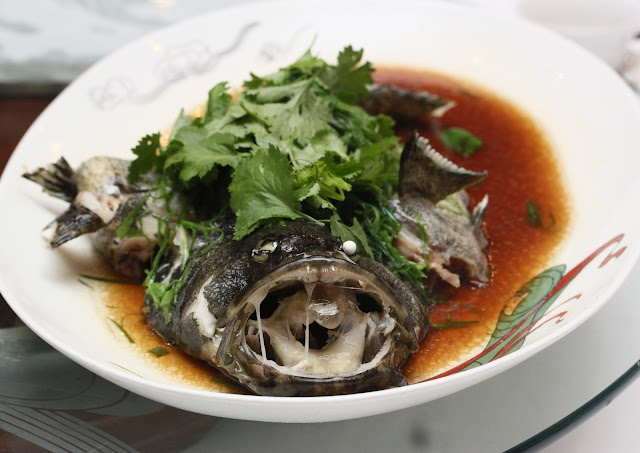 Steamed Live Tiger Dragon Grouper  with Scallions and Ginger.  Lest it be miscontrued, I think what they mean is it was swimming live before it met it's fate on the plate, not that it was steamed alive. 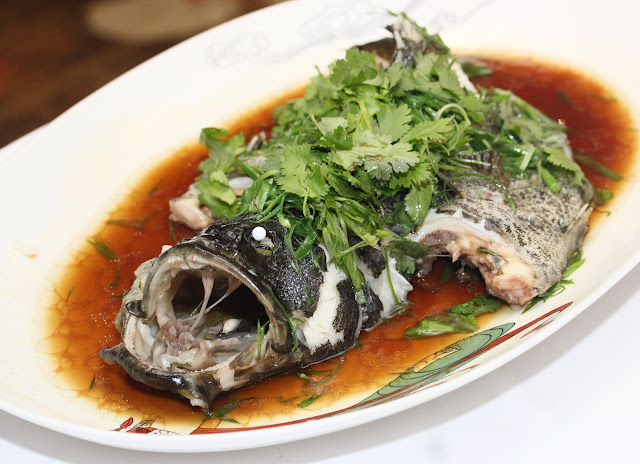 It's always a challenge to get a good shot of steamed fish, because let's face it, a dead fish is hardly the most photogenic thing.  Gone are the colorful hues that one sees underwater. 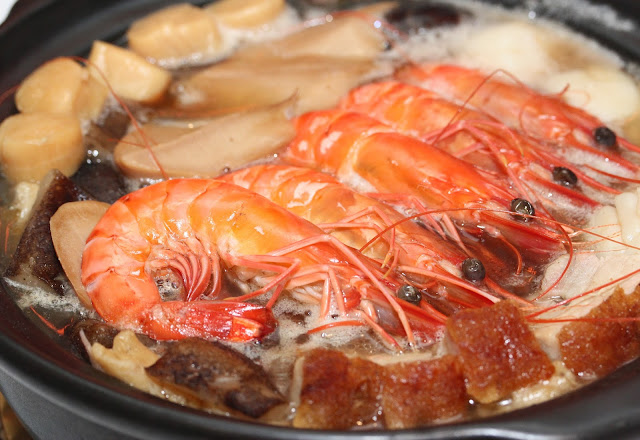 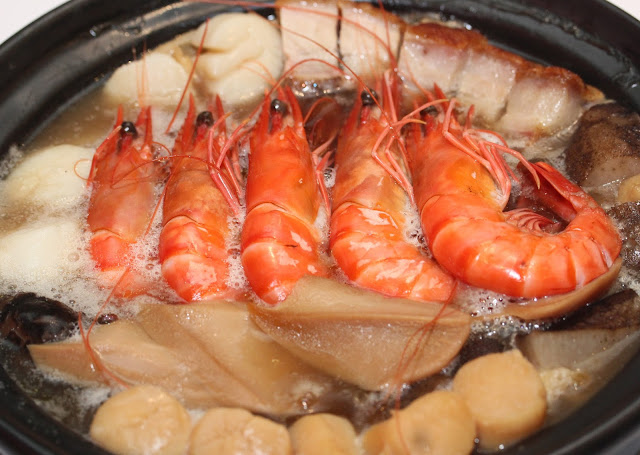 And the bonus dish for the night, POON CHOI, the prosperity pot of goodness.  Scallops, abalone, big prawns, siu yoke, and that's just the top layer.  Beneath that opulent layer was duck, chicken, mushrooms, cabbage, ...the "lesser items" of the food kingdom, I suppose.  Mirroring life in general, I suppose. 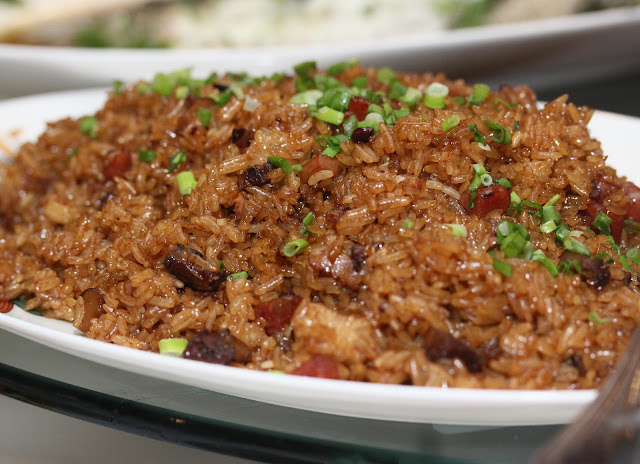 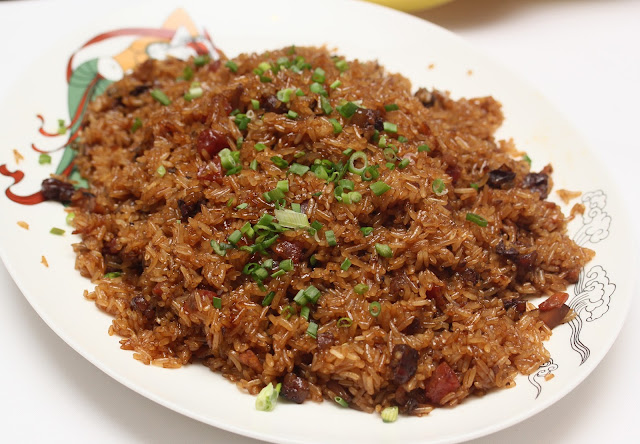 Wok fried glutinous rice with waxed meats.... A good ratio of meats to rice... and very tasty, but so very filling it's impossible to have more than a few spoonsful, especially with a decadent menu such as tonight's. 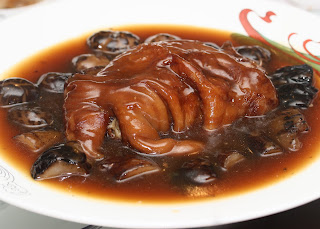 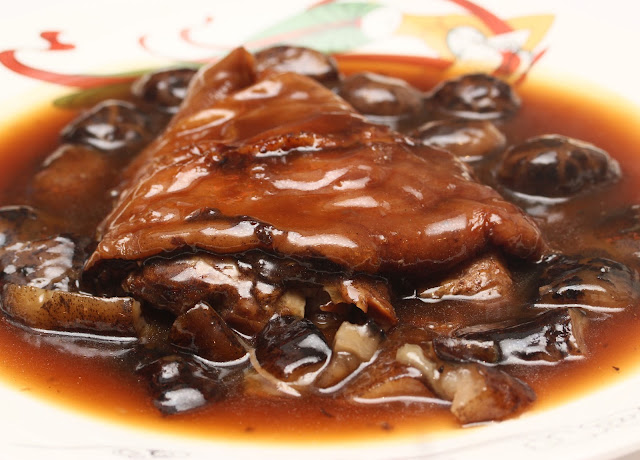 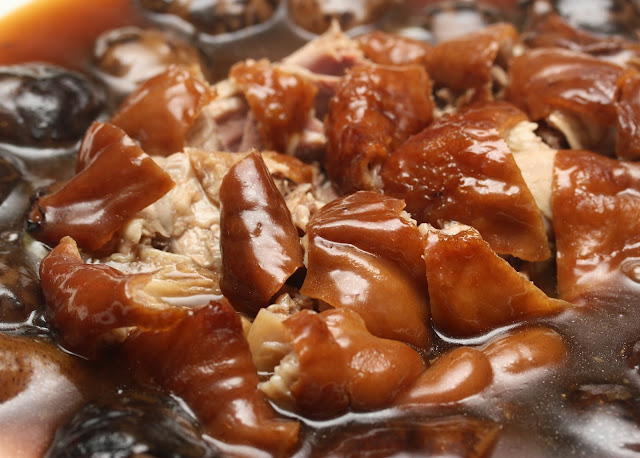 One of my favourite dishes here, the Braised Pork Knuckle with Sea Cucumber.  That stewy goodness of pork skin, fat, cartilage, and meat which melt in the mouth.  Hog heaven. 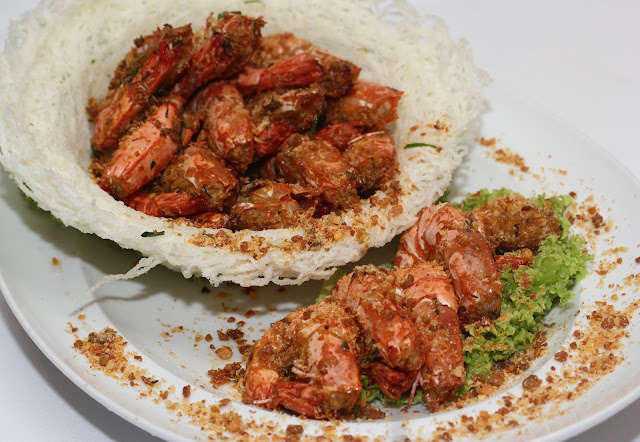 Golden Prawns with Spicy Minced Garlic.  It was interesting to see how most of the women on the table were too lazy to peel prawns, so this was by far the least popular dish based on that alone, until the gallant and chivalrous respective partners were forced into the task. 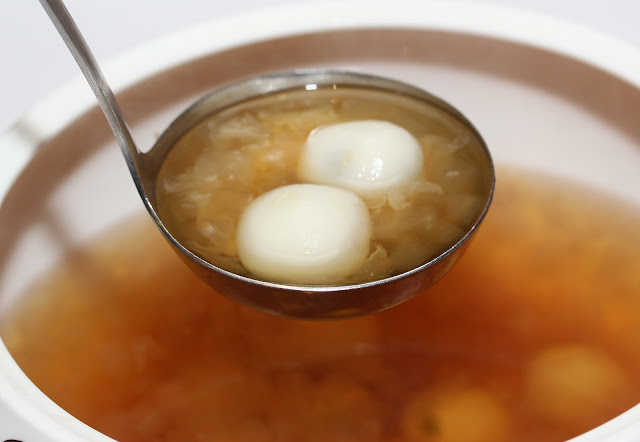 Double boiled bamboo cane, aloe vera and fungus with Tong Yuen. It's always a welcome end to the meal to have that piping hot sweet soup, often gingery, with a couple of balls filled usually with nuts or seeds, to wash down the heavy dinner. 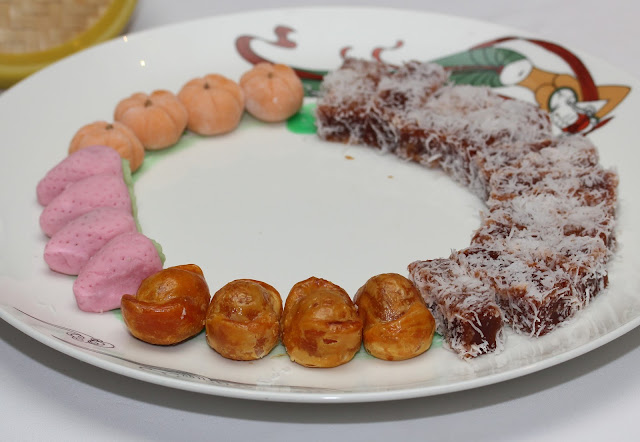 Dynasty's fortune pastries.  I have to say, the nian gao was outstanding...Perfect texture, and not too sweet. 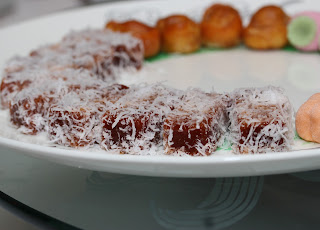 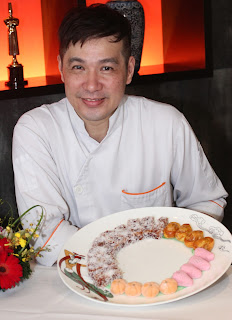 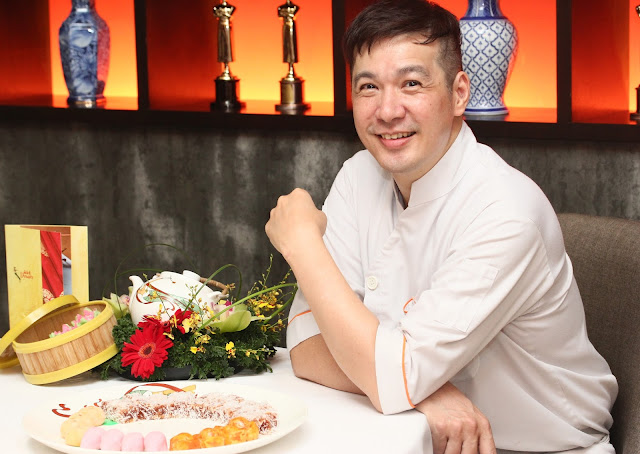