I have to say that the response to my semi commercial venture has been very encouraging. Now, the proof of the pudding is in the eating as the old adage goes, so, it remains to be seen how many repeat orders I have. Last week I've had to cater the following: Apple Pie, Tiramisu Cake, Tiramisu in A Tray, Peach and Banana Crumble, Scones, Chocolate Tart, Lemon Pistachio Sour Cream Cake, Banana Walnut Loaf, plus a side "encore" of a butter cake for Evil Twin's wife's birthday during bible study, but she no show, so the cake went to my mother's cell group. 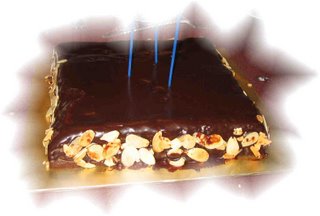 A Chocolate Brownie That Doubled Up as a Birthday cake on Thursday night, for Toekneetoe
The major bulk of orders were for pickup on Saturday afternoon. I had premade the chocolate tart the night before, and plonked it in the fridge. Honestly, I don't know if it was the domestic help's fault, or my own, but to my abject horror, the next day, when we took it out, the whole tart pastry had turned soggy from water accumulated in condensation of sorts. Now, if I had been serving friends, it wouldn't have bothered me too much, but as this was a first time sale, I had to make a proper first impression, so desperately tried to dehydrate the tart, by placing it on a perforated pizza pan, and warming in on a low heat. 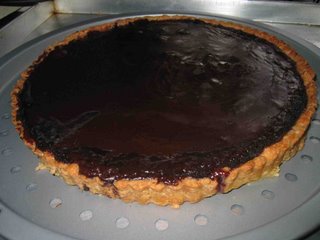 Can you see the soggy pastry?
But after half an hour, I gave up the CPR, and thankfully, had a spare pie tart casing, so after informing the buyer that I need some extra time, managed to whip up a new chocolate tart.

I subsequently froze the old tart, (no, I am not referring to cryogenically freezing some woman), which was subsequently served to the other cell group as well. I had a taste of it, and actually, it wasn't bad. However, if you are a not a chocaholic, I think this is way too rich for the average person, and can only be taken in small doses. Slithers of it. And even then, this recipe is not 100% solid chocolate, unlike some other recipes. Half of it is actually baked, with eggs, cream, cocoa, etc....

My latest treat to myself, Jamie Oliver's new book. I am not really a JO fan, but I got a 20% discount plus free brolly, so I am a reallll sucker for these things. 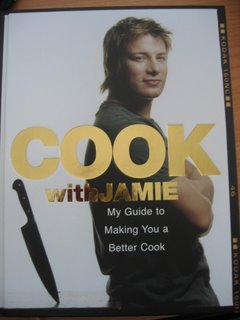 Had a glance through, it's typical Jamie Oliver, simplicity is its trademark. However the dessert section is disappointingly short. I think there are only about 20 types of desserts featured. One or two do look rather delectable, but the rest...hmmmmm......

wow, so many orders each weekend... well done! hope it keeps up. and good job with the chocolate tart rescue!

havent seen JO's new book yet, but now that i know the desserts section is short, i wont really bother looking for it :)

i think the JO book is really new, just arrived over the weekend. got some nice looking recipes la, i have to say.

Didn't know there was a new JO cookbook, must check that out. I was too busy stocking up my bookshelves at the Times warehse sale. Great save for the choc tart!

Tempted to get your chocolate tart but i think my throat would seize up. :) Looks delectably viscous.

Nigella's How To Be A Domestic Goddess is good for desserts.

I don't like JO...his show kinda pisses me off.

yar, i know what you mean about JO. i also dont like watching his shows. i dunno, i find that despite that supposedly down to earth veneer, he's actually so full of himself. not to mention that half the stuff he whips up looks terrible. as i said, the main reason i bought the book is coz got 20% off, and free brolly. hope none of my friends read this blog, lest they get it as a birthday present. (after i've photocopied the relevant dessert pages).

i adore nigella's show and books. she comes across as being a diva, but at least, she's forthright about it. i hope i hope i hope domestic goddess and forever summer are on sale at the times warehouse sale.

do take a good look at forever summer before you decide whether to buy it - from what i can see, not that many do-able desserts also... definitely her domestic goddess and feast provide more bang for the buck, as they're much bigger books for not much more in price :)

and if you have specific recipes from forever summer you know you want, can ask if i have it... ;)

Hi, Nice cake, I am looking for a cake mixer, fatvoybakes, your using which mixer? any mixer to recommend?

snowie, thanks for the offer. i thought her home made ice cream recipes looked rather delectable. but i think i have shamefully taken pics of it while browsing in bookshop, so for now, i'm good. thanks.

anonymous, re cake mixer, well, thus far i am only using my old philips cake mixer that i won in a lucky draw in 1992..which has been lying around in cold storage, with no purpose, until i picked up this hobby. in addition, i also have another free one that i redeemed from one of the loyalty programs. BUT, however, i am eyeing a proper kenwood patiserre, or master chef. apparently there's a shop in between bake with yen, and chang tung, in tmn mega, that gives really good prices on kenwood mixers. if you not investing in an expensive kenwood, make sure your cheap one has a stand and bowl that can rotate. the cornell mixer that i redeemed is hopeles.....the bowl doesnt turn.

No kitchen aid? Someone told me not to even wish for one as my Kenwood will last me forever. You can also get quite good deals at Eng Seng Hin in SS2 for Kenwood mixers.

Hey, check out the Nigella pavolva in Delicious - it's a mini version of the one she made on air.

Actually i got a pensonic mixer which got frm lucky draw. But those mixer are not so good as it cant beat longer then 10 minutes, or else it will burn. lol
So wanted to get a mixer like kitchen aid or kendwood which can mix bread dough.

Boo, how much did u bought ur kendwood? i saw u post few month ago that u just bought one.

Fatboy, My pensonic bow turn for the first few time i used, then after the 3rd time, the bow also dose not turn, and send it for warranty and now it get well, I guess cornell is also under pensonic company, maybe if is under warranty, u can send it to claim.

bloghopped here. you have a fabulous site and i love yr bakes! gosh... it left me drooling. no kidding!

anonymous, let me go check out the shop near bake with yen, and see if we can get further discounts if we bulk buy the kenwoods. (yar, like 2 is "bulk")

mariya, what a fantastic blog YOU have. your biscuits and cupcakes immediately made me put on 5kg.

wuiyo! m i MIXING with the wrong crowd here? all so learned about cooking n stuff! i oni know how to eat.

snowie, if u wanna know, the brownie cake was really good. m not much of a chocky fan but i found the choc brownie cake not to rich ... just right. i had quite a few big slices of it despite after a heavy dinner. so it was gud. u try-lah.

fatboy looks like ur SCV is really taking off.

i tink one of these days i may ode some crumble or something ... m a real nut when i comes to HOT & COLD combo desserts!

hahah man i don't deserve all the flattery! i do orders, i'm just starting out. very amateur-ish. :) and i'm from singapore.

thanks, i now agree the brownie cake is really good, steven toh - i made it from fatboy's recipe 2 nights ago and about 3/4 is finished already!! =D

I have a kenwood which is fab. I am waiting for one of my children to leave home and I'll give them mine, so that I can buy myself a kitchen aid. it is supposed to be THE best!
Mrs T