....And I'm not talking about these babies. Yummy Glass Noodles (is that what its called? Lai Fun) swimming in a divine dark sauce, embellished with bits of tripe, beef (brisket?) and beef balls.

It was the much anticipated lunch/brunch I've had in a long time. I had visions of strips of caramelized pork, interspersed with that lovely thing called lard, on a plate, melting in my mouth as I assumed the stance of pretentious sommelier smelling an expensive glass of chateaux latour.

Then I got the msn message from unkaleong.

Anyway, I was placated quickly enough when I heard BEEF NOODLES IN SECTION 17. I vaguely remember from the recesses of my alcohol wrecked brain that someone had blogged about the UNCLE CHENG beef balls. And beef and I, we go together, like rama lama lama
ke ding a de dinga a dong, remembered for ever like shoo bop shoo wadda wadda yipitty boom de boom.

The rendezvous time kept changing, like a moving target. Anyway, it was settled finally that we meet at noon, but by 11.50, I got a call from them saying they were there.

The place is easy enough to find, if you have vague bearings in section 17. There appears to be quite a lot of good stuff within that 2 km radius.

So ya, I digress. The owner, Julian Cheng, son of Uncle Cheng, has the PR skills that would make Samantha Brown pale in comparison. (I can't think of any other famous PR person on TV). Or Tony Fernandez la, to localise the context a bit. We were promised the last piece of tenderloin, in a very beefy broth, that circulates your blood faster than you can say COWA!!!

Unkaleong, WMW, Mervyn and Joanne (the latter two are not floggers, but herbalifers) were my sterling lunch company. The beef noodles, (pictured above) is exceedingly tasty, and while I don't really care much for lai fun, (that white noodle you get in assam laksa), the superior bovine qualities overrode that minor detail. The tenderloin was as good as it looked. 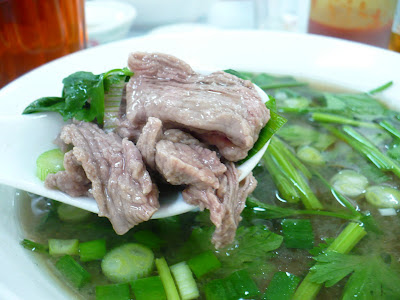 Then Julian proudly brought us THIS little gem in his large ladel. Bull's testicles. (reminds me of what the magimix chopper can do). 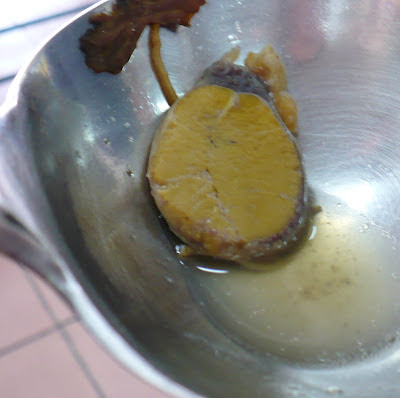 After taking pics of it, he very kindly offered it to us for tasting, proclaiming that it tasted like egg yolk. I guess eggs, yolks, testicles, seem to all part of the circle of life in its most basic form. Since the rest of the youth of today at the table virtually recoiled in horror, I thought I shant offend that very nice chappie at the other end of the ladel, so I gingerly scooped up that sliced testicle and popped it in my mouth. Well, it DID taste a bit like egg yolk, a kinda powdery cum meaty taste. I'm not sure what the function of eating a bulls' privates serves, but it only goes to show that the Chinese are such practical people. Nothing is wasted. And things that ordinary mortals won't dream of eating, are through a series of well thought out propaganda, true or otherwise, are espoused by the Chinese as having medicinal values. 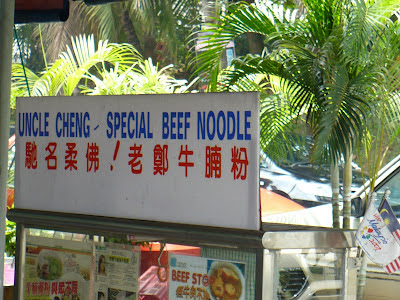 Anyway, balls aside, the meal was very delicious, and I would highly recommend the beefily inclined to stop over at this wonderful stall. It's located at Khasiat Coffee Shop, and you can spot this prominent sign. For other reviews on Uncle Cheng, check out WMW's blog and Nigel's blog.

On a separate matter, look who's been pimped in Clove today!!!! Talk about anonymity. Well, her cover's blown, so I'd say to the food blogging fraternity, don't worry about censoring HER pictures in future writeups!!!! 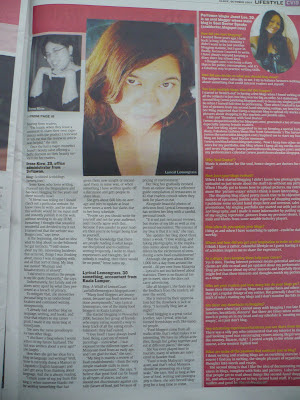 Posted by fatboybakes at 1:38 PM

At first while glancing at your first photo, we thought you were infected by Xiu Long Bao's meat ball nitemare.....lol ... as scrolled future it was uncle cheng's wonderful mentioned beef noodle!! yes, yes we will drop by soon to try......did we hear you mention BIG testicles? Woah....

Hahaha..next timelah we do Char Siew ;) WIll confirm next week...

Interesting...err...wonder if i dare to try it or not...but since you said it taste like egg, i might! Going tis Saturday! Yippee!

"I'm not sure what the function of eating a bulls' privates serves," - I can guess wat - eat kidney: boost kidney function - eat bulls balls: well! Let us know if you notice.

Just sent off LL & BE to the train station (with a little something dark and rich for you, and fragrant and nourishing for your lovely wife.) We have been teasing her all morning about her pic.

Ok, I need to officially hang out with you. You're a real food whore like me.

eh..how come looks like ikan kurau 1?..haha..some1 willing to fetch me to char siew?? i need a fix also..u know how hard is it to get char siew in damn sentral!!!??

nipples, i hope that from now on, everytime you look at ikan kurau, you'll think of bull's balls. i guess i'm close enough to sentral to give you a ride when we go charsiu-ing.

crewcut75, wow, i'm honored. dining with photographer extraordinaire. you a food whore? well, certainly got the build and looks to be a normal male whore...(running for cover)

wmw, yar, even if you had sunglasses and white stick, and a dog, you cant miss it.

msiagirl, thank you dear, in advance for the sweet treats.

unkaleong, tell me when la ok.

lemongrass, apparently the editor likes you ler. that's why big big. eh, if have to PAY for that kind of size picture in the paper ah, it will cost arm and a leg.

BBO, haha, i didnt mention BIG testicles. i just said bull's testicles. aiyo, i haven't used this words so much since form 1.

i love the description of u towards the food! Too bad i can't take beef..

wow! Hats off to you. You got guts to try it.

hmm...your beef noodle makes me drool lah. I haven't had that for more than a year already.

hi. i saw your previous post on the one you made a oreo chocolate cake. it looks great! i'd love to make one for my friend's upcoming birthday party. do you mind sharing the recipe with me?i'd appreciate that you could email it to me. thank you.

thanks again. =)hope to see your reply asap

Making me ask myself why I no stay PJ, again. *sigh*

"Uncle Cheng Special Beef Noodles" is in Facebook, his long waited First Restaurant is opening in SS2. find out more details in FB. or call Chef Julian at 012 3030626