When that woman Lyrical Lemongrass popped up on my MSN and asked me if I was keen to try out the MIGF menus..... alarm bells rang in my head the way a bank alarm goes off after a robbery. The disappearance of a lot of cash usually accompanies these kinds of adventures. Very promptly cutting and pasting the relevant links, the prices were quite staggering at some places, be still my heart.....this is all very well for HER, she who just came back from a British tour, with a newly bough canggih manggih camera from husband. I alas have no husband to bring me on trips or to buy me cameras....and a RM160++ per head dinner times 2, well, its kinda almost the months salary for the maid.

Anyway, we agreed on Pacifica Grill because it was only RM120++ and there was a possibility of a 10% discount with my MPO subscriber card. Yeah, beneath this pork seller veneer, I try to be a bit kultured la, and every now and then pop into the Dewan Philharmonik for a musical nap. I digress. So yar, it was like planning for the 70th birthday of the Queen, the amount of dinging donging that went on. And suddenly, the venue changed to GOBO, in Traders Hotel, at RM160++. Alarm bells again. ANd this is without plonk. I contemplated a hip flask, but I think I didnt want to corrupt the youth of today with whom I knew I would be dining.

I was quite excited, as I was a Traders Virgin, as in never stepped into the hotel before. Was supposed to have gone for drinks at SKYBAR last Saturday, but it rained, AND, the Skybar has no roof.

Expecting everyone to be late, I look my leisurely time, and got there at about 7.45pm....but I FORGET, these are food bloggers who take their food seriously. Apologies to LL, Precious Pea, Nipple Joe and Henry for the tardiness, which is actually very unMe, normally.

Parking was easy, as it shares the HUGE carpark of the KL Convention Centre. ANd the lift brought us straight to the place, without having to interimly wander like a lost soul in some cold lobby. They were already there, all of them, waiting like starved tigers.

The bread was yummy, freshly baked, and with bits of olives and dried herbs, coupled with the latest thing, TRUFFLE BUTTER. Does this mean that olive oil and balsamic vinegar has become yesterday? YAY, what IS with that anyway. God made butter to be eaten with bread, and vice versa. Olive oil and balsamic vinegar. It's like force feeding oat bran down a person's throat.

Lemongrass was ill, and sniffing like a dog on heat. I'm bracing myself for the onslaught of the germs, as I was within contagious distance. As a result, she wanted hearty soup and fish....which apparently is not on the MGIF menu. Once I knew that MGIF menu wasn't compulsory, I immediately grabbed the a la carte menu, which actually was VERY reasonably priced. Anyway, here's what we ate: 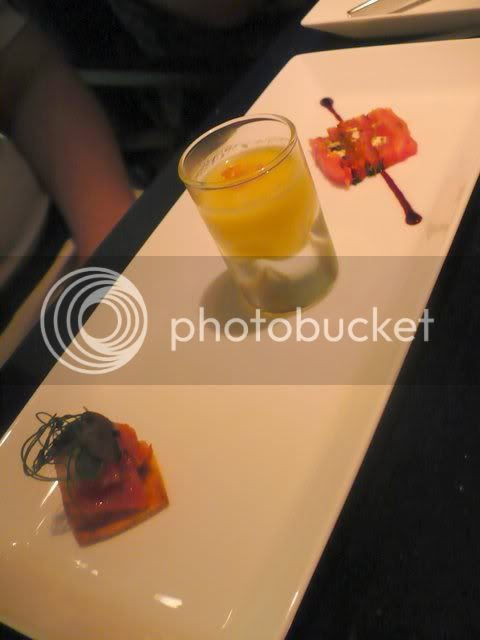 Henry went for the MGIF menu, so had a fancy smancy starter, some tomato kek lapis thingie, a shot glass of something, and another something. (I hope the editors of Vogue Travel and Living aren't perusing my very descriptive commentary of the food). 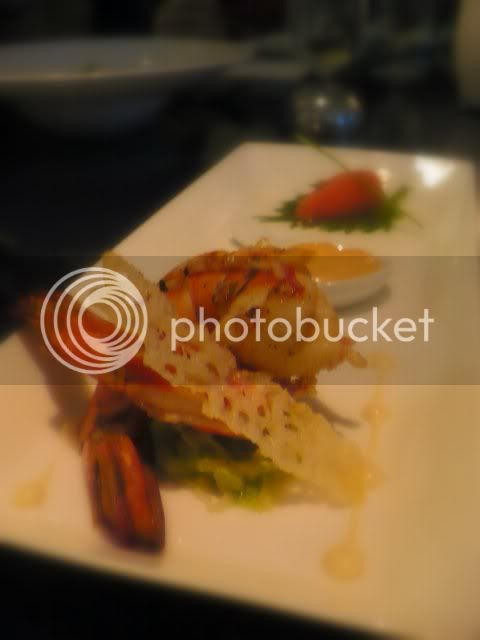 Nipples had the prawns something something. The prawn looked nice and plump and fresh. Oh, its listed as prawn cocktail in the docket. Not very descriptive are they. Prawn cocktail @ RM29. Lobster bisque soup for RM26. Lovely, creamy lobsterish stock, with no sign of any lobster meat. Maybe a small booger size morsel on the island of sushi that floated in the middle. But the taste was excellent. Nice shrimpy prawny strong flavour. 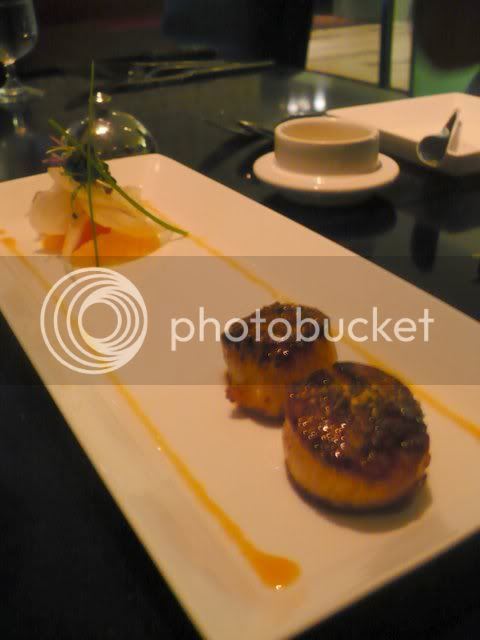 Hokkaido Scallops for starter. Since it was wife's, I managed to try half a scallop. It was fresh and firm, as scallops should be.

For the mains, I had a silver dollar mushroom as a sidedish. They aren't big on their garnishing veggies, so you have to order sidedishes of greens and what nots. 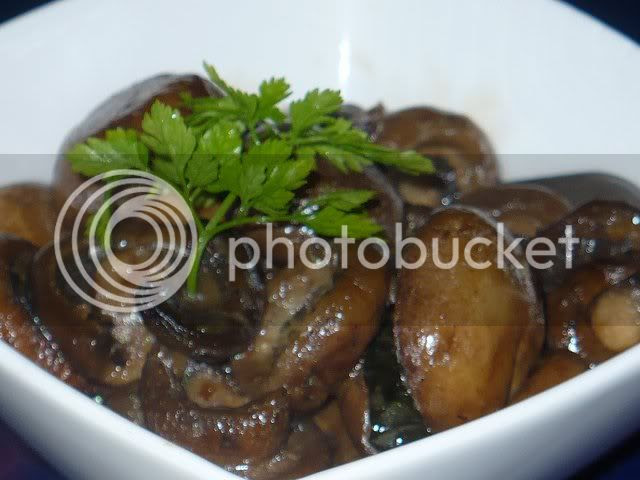 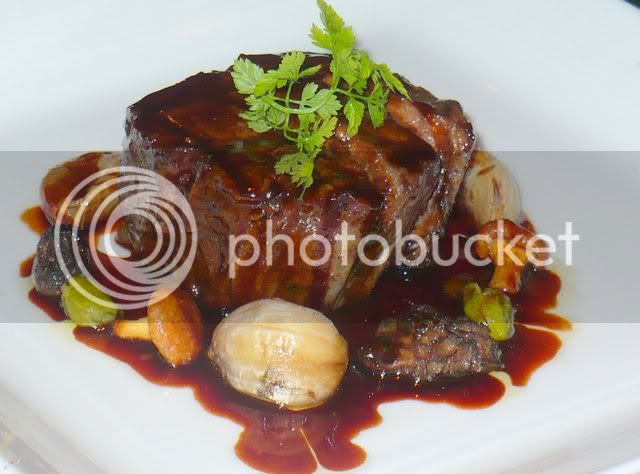 Henry's MGIF Tenderloin looked divine. It was getting quite tiresome trying to photograph these things under natural light so at some point, flash it was, hence the different shades of colour. The baby beef short ribs in merlot sauce, is FANTASTIC value for money. At RM38, it beats ANY restaurant in town hands down. Seriously, for this quality meat, tender and falling off the bone, .... makes other restaurants sound like a slaughterhouse. Oooh so tender, and the sauce, all merloty, (mer lowy), with large bone for your dog if you have one. Yummy. Thumbs up all the way. 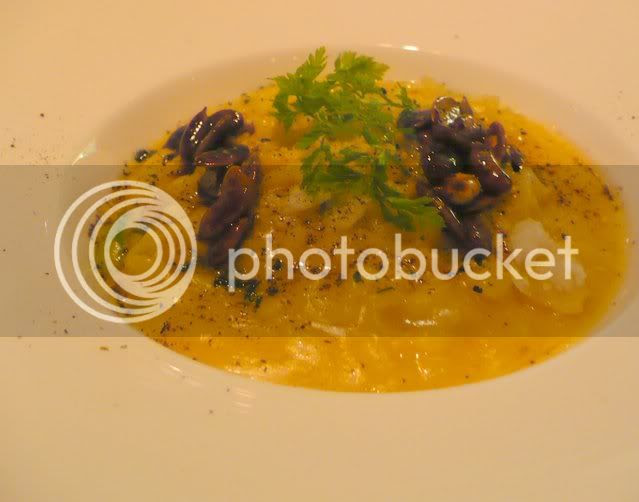 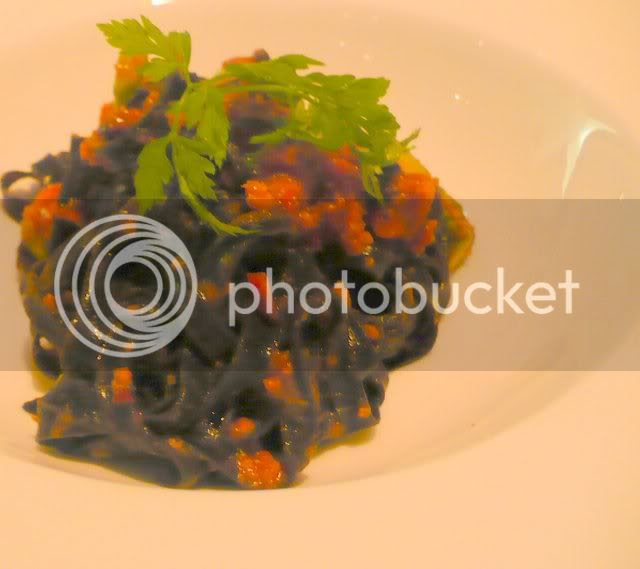 Lemongrass opted for the cod, for IN COD SHE TRUSTS, but my picture of the cod was so pathetic, I can't even picasa it back to life.

Desserts, yummy. Wife and I shared a bitter almond chocolate torta. I asked the waitress if it was bitter almond, or bitter chocolate, she looked bemused. 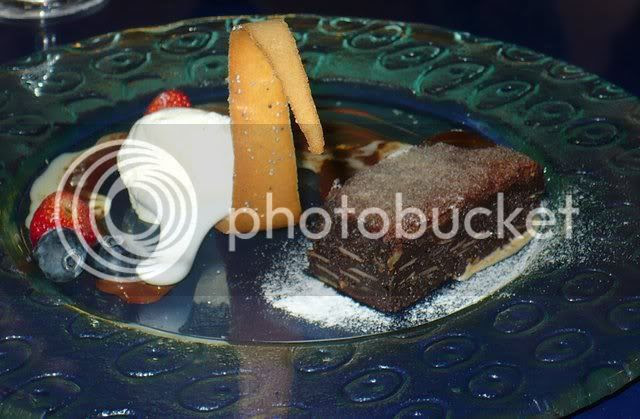 Torta was nica, but not orgasmic. Not enough vanilla icecream to go with it, and also, the vanilla ice cream wasn't creamy enough. 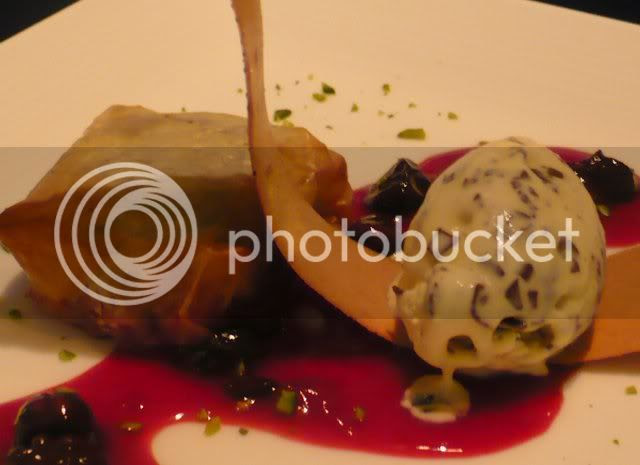 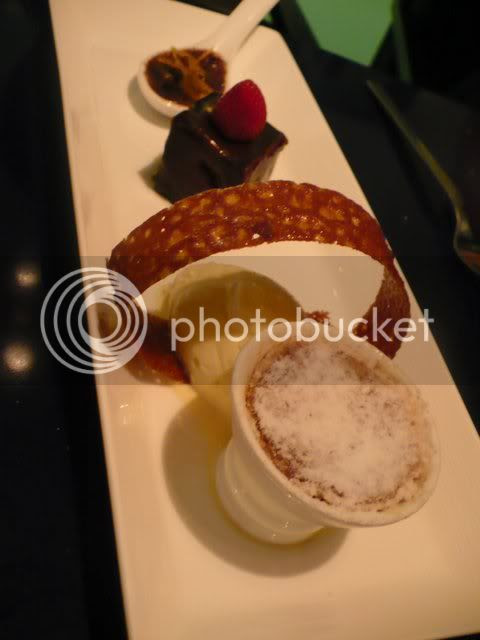 Overall a very pleasant experience and reasonably priced. Parking after validation is free as well, which in itself was a RM30 saving between us. Lemongrass's parking would have been RM17 if she had to pay. Yeah, definitely worth checking out, and the views from the SKYBAR, makes you proud to be Malaysian.

Posted by fatboybakes at 2:25 PM

I have yet to try fine dining like this kind in Malaysia...everytime I am home, I can't even finish eating the hawker food...will have to move back I guess.

Hehe...Rasa Malaysia has the same mug shot as you...minus the goatee of course. She'd just look strange with one.

I totally enjoyed my "something, something, and something". Good thing we went yesterday and not today. Today, tastebuds went bonkers. Can't even taste da chilli padi. Shit.

So shall we go out for another MIGF meal?? Or at least, a pseudo-MIGF meal? hahaha.

Ahem...we are not starving tigers, we are a pack of hungry wolves!

Looking back at Nipple's risotto, it reminds me of the comment you made. SO FUNNY!

i'm surprised with the alacarte's prices, so much more reasonable than shang!

how in the world did u manage to picasa that pic of the ribs to looks so nasty looking..aiyoyo..

haha my rissotto..yes yes..its looks like **** but tastes pretty good..

that lamb shank is affordable! what a shame.. i didn't know there's a hotel called Traders :| so, it's actually opposite klcc?

They look so so so delicious, I'll give them a try, definitely.

Hi, I liked your review. (And I'm a olive oil + balsamic vinegar with bread fan) heh. Could you elaborate a little on the type of music and crowd there? (I'm fussy like that) Much appreciated! :)