Happy New Year dearly beloved. For those of you who have been enquiring after my MIA status, I thank you from the bottom of my cholesterol laden heart, it's nice to know that there are people out there who actually enjoy reading this waffle. Admittedly, I had voiced to Lemongrass that I woke up one morning and suddenly lost all interest in blogging. I've been to Penang and back, and didn't take any food pics, or even if I did, they were half hearted attempts. The entire month of December has been one orgiastic culinary debaucherous banquet, with more champagne imbibed that I think the last few years put together.

Resolutions for 08? Ah, resolutions are for the imperfect.

Anyway, what triggered off a sudden reignition of interest in blogging was this lovely homecooked dinner I was invited to recently. 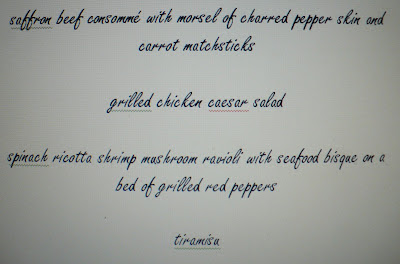 Ya, well, the friend in question resides in Hong Kong, but keeps a pad for whence he returns every so often. I was treated to a rare glimpse into his prized equipment, a complete range of kitchen knives for every culinary purpose known to mankind, from chopping to sawing to carving to paring to filleting..... Not a good place to be when confronted with a serial killer.

Anyway, as I entered the hallowed halls, the scent of a divine beef stock wafted through the air. Saffron.... the package label was "a few strands of saffron", for some absurd amount of money. As I waited for the other guest, the host let me play with his aforementioned sharp tool, and let me chop up some cheese. I was impressed at the colorful array of his cheese platter. The frozen blueberries and raspberries were given a quick blast of flame with the blowtorch. I see I am not the only Asian to serve cheeses from the very onset. An Australian guest once commented that it was unheard of to serve a cheese platter at the beginning. Blah. 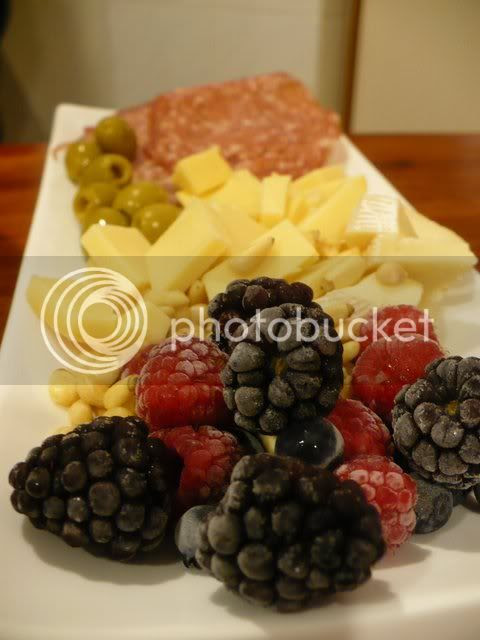 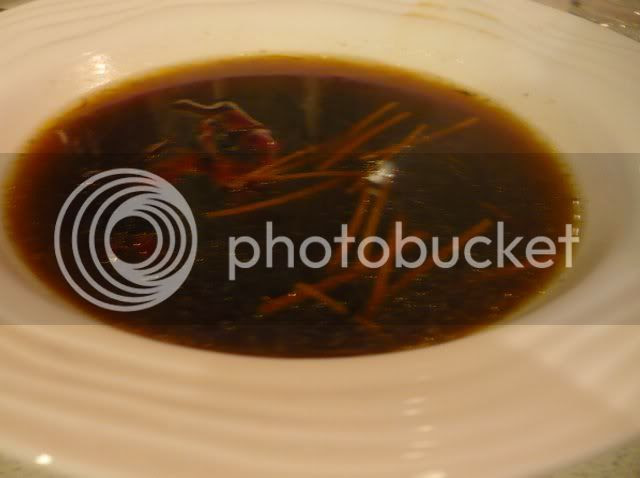 After the other guest arrived, we were promptly served the beef soup. The clear consomme was really divine, and apparently the stock took two days to prepare. From the notes from the chef, he used egg white to soak up all excess oil floating around. Well, I don't think I have had such a delicious consomme at a restaurant before. 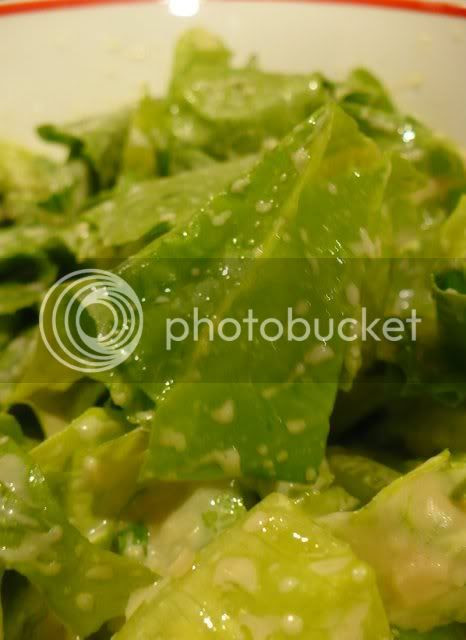 The caesar salad dressing was made by the man himself, and it was delicious. Good enough to eat on its own. He can bottle it to sell it. Above are the semi dressed leaves, waiting for the next level of garnishing. 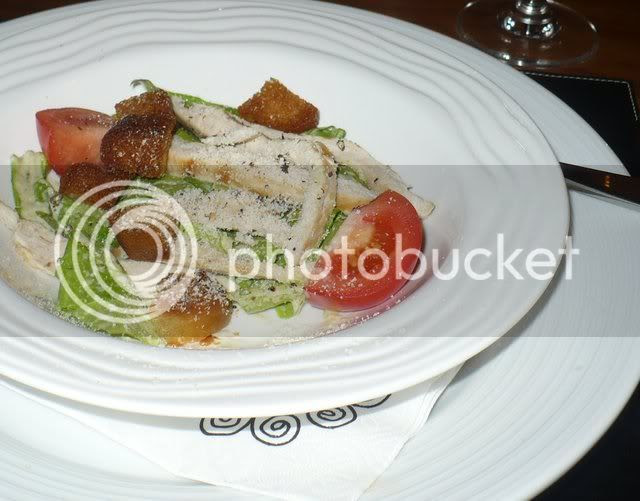 The finished product, complete with freshly grated parmigiano reggiano. Loved the freshly fried croutons, though they must be so terribly unhealthy. Always thought croutons were baked, but these were virtually deep fried. 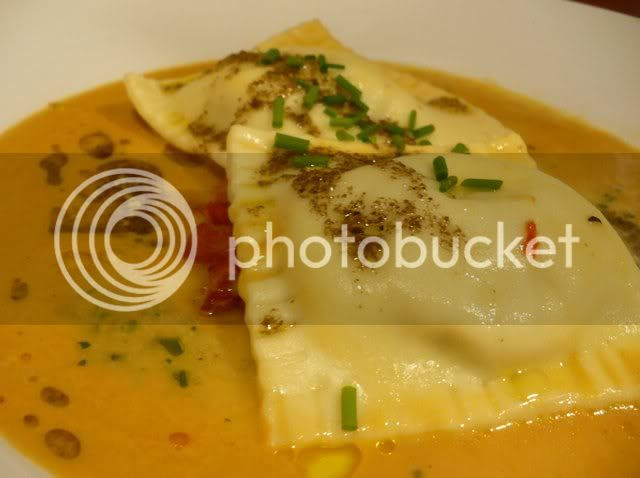 The ravioli, homemade from scratch, was rather good, but the seafood bisque on which it floated was DEEEEEVINE. Freshly chopped chives as garnishing..... 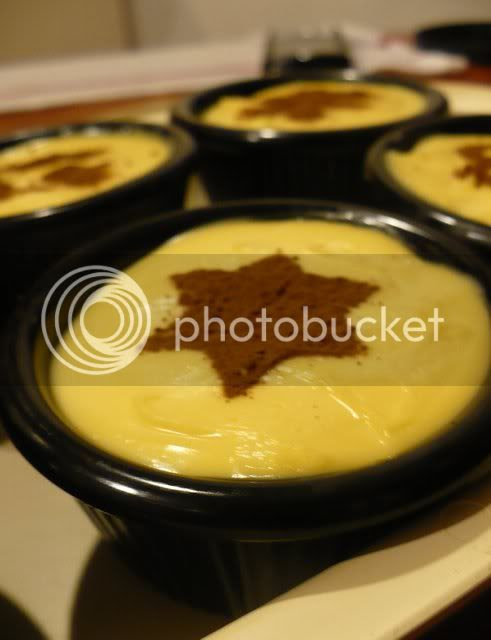 Usually I would have offered to bring some dessert, but this was a rather last minute thing, and I wasn't even sure dinner was on, as the invite was sent out when I was in some stupor at a friend's 40th. The other guests however brought tiramisu, complete with stencils to make happy cocoa faces on the surface of the tiramisu. Yummy. 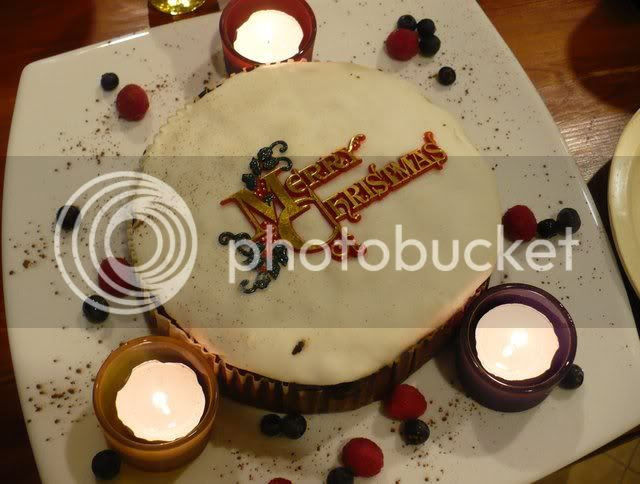 To end it, we had a christmas fruit cake, commercially bought. Alas, it looked better than it tasted, as it was a tad dry. But considering how we were stuffed anyway, it barely made a difference.

I'm sooooo glad you're back!! You left me starving for big words and delicious sarcasm for a whole month!

Food looks divine! It's wonderful to see how people take pride in their cooking to start preparing days earlier. Bravo to your friend!

well its a beginning..nxt post, you better start posting about ur dinner haha..

im beginning to wonder where in the world do u find ur frens..

glad to see your entry. I have been wondering what happen to you and miss your delicious and entertaining posts!

He works in real estate, isn't it obvious?

Yerr.. why you have so many friends who can cook so fancily wan?? Feel so like a plebian liddat. Birds of the same feather flock together... are you like your friends too?? :D

Yeaahh!! You are back and hope you had a nice break (from blogging). I really envy you la..how come all your friends can cook so well?

Welcome back *hugs*
I think the question should be ask was "How come so many friends of yours can cook so well!?"

happy new year! thanks for continuing in feeding us with big words and of course those saliva inducing dishes of yours and your frens

yay! U r back!!!!! What a great start to the new year with the post. Keep going!

daphne, thanks, was telling lemongrass that my interest hasnt been wholly reignited yet.

babe, where got big words?

jason, hugs to you too. err...dunno lah.

kat, thanks again for the thoughtful high cocoa content chocs.

nipples, what next dinner? (innocent look)

lemongrass, of course, you inspired me

i am so glad that you are back!!!!! happy new year to you and your family! please don't stop blogging cause i enjoy reading your posts soooooo soo much! =)

and if u think i can't sense sarcasm dripping from that reply, u're sorely mistaken.

Good to have you back!

Cheese Platter, my fav despite my constant shouting of being fat! Hah!

Caesar salad looks nice but i never heard of fried crouton. i always thought it's baked?

Great to see a new post up! Still not to late to wish you Happy New Year! Keep on baking (and cooking too!)...

welcome back *hugs* and I must comment that you have the 'bestest" of friend whom throws "lavishes" of dinner parties hehe, hey, keep the blog coming even if its not often as you can, do it when inspired lah ..no prob. Better than just feeding it for the sake off, right?

RM, poke poke back...aiyo, so fast nearly one year since we met hor. you coming back this CNY?

imbitchy, (ooooh, is THAT what it's meant to be???!!! suddenly dawned on me!), thanks for the encouragement. yall are all so supportive.

Jojo, i oso thought croutons were baked, but i guess not.

meiyen, awww, how sweeet!!! hey, how are the wedding preps? this is a big year for you hor!!

Glad to see u're back blogging! Long absence from you that it was getting worrying!

Hi! It's great to see that you've started blogging again! Miss reading all about your adventures :)

glad you got over that phase. cos i was really missing all you post.