I am very lucky, because these days, the only time I need to wake up really early is when I need to catch a flight somewhere. In the days of yore, I used to have to wake up at dawn for work, and other less pleasurable pursuits. So I guess I shouldn't complain, even if I was slightly hungover from a friend's 40th the night before, and having to wake up at 4.15am to catch a 7am flight to Siem Reap. (pronounced Seem Ree ap, not Siam Reep).

Since this is a FOOD blog, I shall stick to the culinary aspects of my trip, but of course one has to make a cursory reference to the other things, also to add some context to everything, afterall, a steak is a steak be it in London or Siem Reap....

While everyone has heard of Angkor Wat, (unless you completely did not pay attention in school, and were high on cocaine during your schooling years), not everyone (including me) had heard of Tonle Sap Lake, a HUGE HUGE humongous inland lake. A picture paints a thousand words, so there are 9000 here. 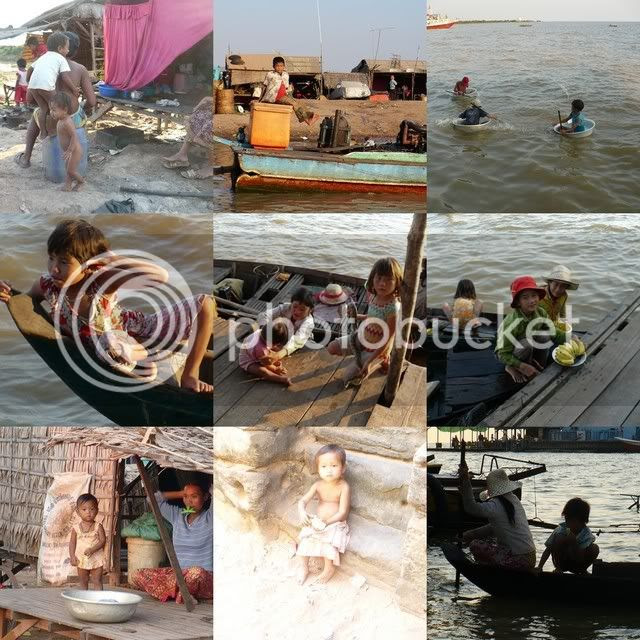 I took pictures of the children to remind ours how blessed they are. Yet, these kids seemed contented. Look at the heart warming pic of the three boys playing in the washbasins as boats.

Of course, one has to have a photo collage of the famed temples. Angkor Wat being just one of many. There are many, like the one shot to fame by Lara Croft, like the Jungle Temple (forget what its called? Ta Phrom I think), Bayon, (with the famous smiling buddhas), etc etc. That famous scene which everyone takes at the pond with the reflection of Angkor Wat....WELL, there I was looking for some monumental body of water, like the sea of Galilee, but it turns out the reflective lake was nothing more than an oversized puddle. (the middle picture in the collage) 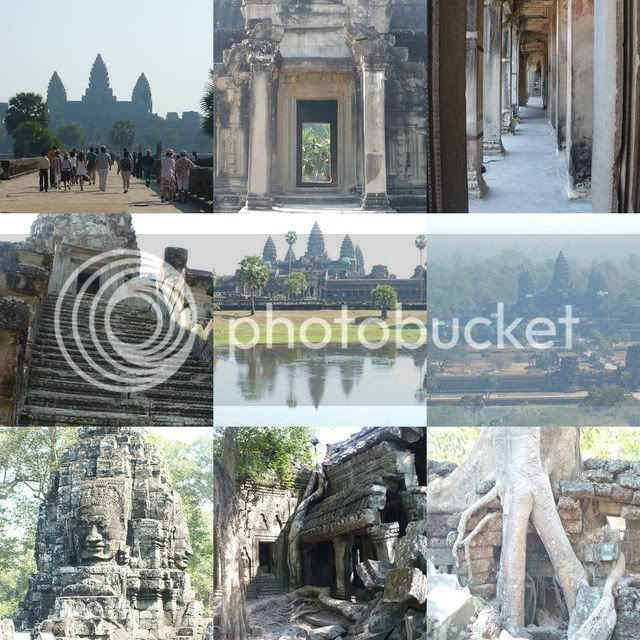 In contrast to the general squalor, Siem Reap is also host to many a 6 star hotel, from the Raffles, to the Aman Sara to the Sofitel. The one in the middle is where I stayed, some cheapo hotel from the Air Asia Go Holiday package. 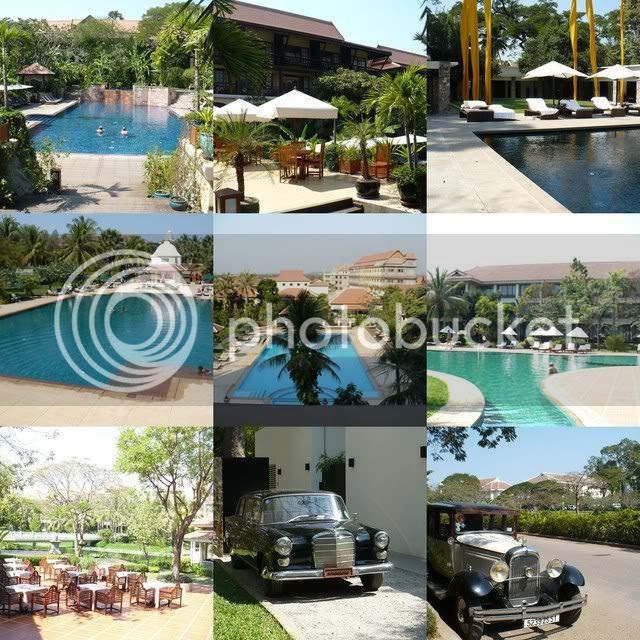 Now that we've got the sight seeing out of the way, food..... hmmm. I honestly CANNOT say that I found the street fare appealing at all. As such, I shall only show them in passing, and will only blog specifically one meal. 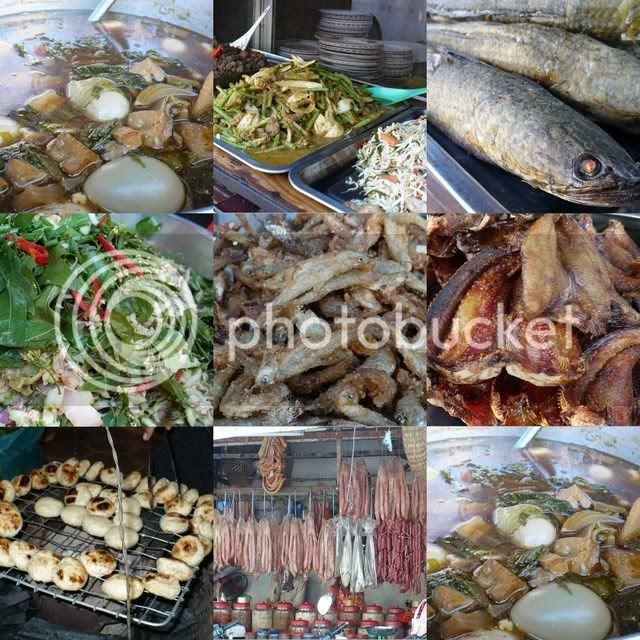 These were all taken in the vicinity of the Old Market. Honestly, give me our economy rice or nasi kandar anyday. Look at the hideous fish. Looks like something out of a Stephen King book.

Moving away from the street fare, we had lunch at the Raffles, where I think I paid the most EVER for a bowl of noodles. It was a Khmer noodle, probably their version of laksa crossed with the vietnamese Pho, but it was very ordinary, and certainly not worth the USD18. (RM 60) Why did I have that? Well, it's a long story, but call it peer pressure if you must. Wife's nicoise salad seemed to be much better value for money at USD11. Having said that, the food at the 6 star hotels aren't overly over the top, and are comparable with our hotels here. 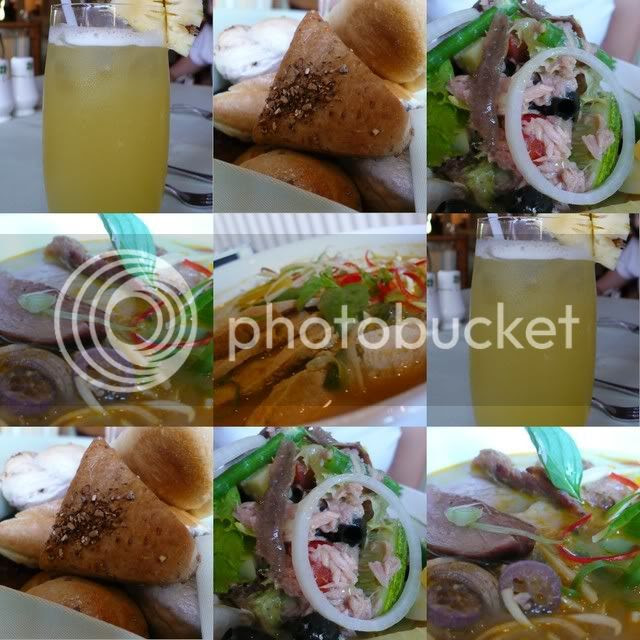 We had Khmer food on the first night. Now, the lighting in every restaurant seems atrocious, so it's virtually impossible to get proper food shots at night, at least not with my cheap camera. So basically I gave up after awhile, and have no proper record of our meals. We ate at a place called Touches, at the other end of Pub Street, and had their signature Khmer-ian Amok, (like a green curry), something that resembles pai tee, some Thai Tom Yam, etc. I found all the soups in Siem Reap not hot enough. Us Chinese like our soups piping hot. Whatever heat that was lacking in temperature was amply made up for with their Chilli Padi, which really offers a major kick. 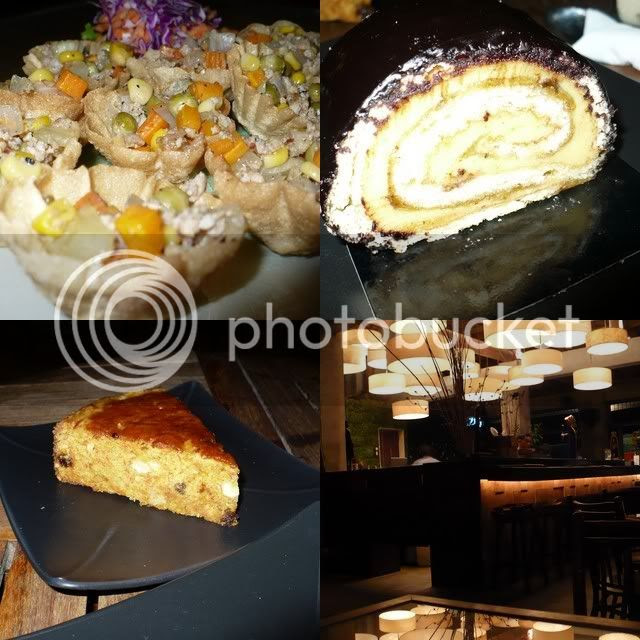 A lovely little establishment called the Blue Pumpkin offered free wi fi and an escape into a world of pastries and ice cream. My all time favourite was the caramel cashew nut ice cream. The cakes, a banana chocolate roll and the carrot cake, were dismal. 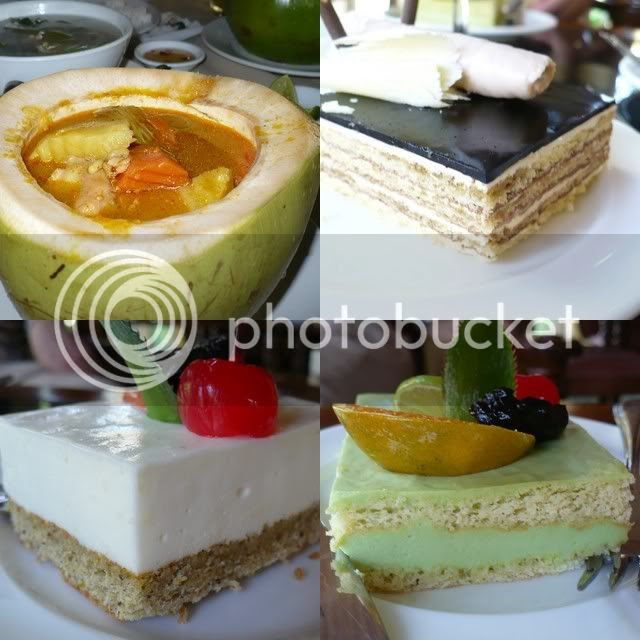 After a morning of traipsing around the temples, we had to have tea at the Sofitel. The coconut curry was from some stall where we had lunch, outside angkor wat, while the cakes were from Sofitel. Again, the cakes were dismal. Fortunately, they only cost USD2 per piece. The opera cake was a 80 year old opera singer. Dry, and falling apart. The chilled peach cheese cake would have given Secret Recipe a run for their money. The pandan cream cake was probably the most passable of the lot.

On the 2nd day, fellow traveller got an sms from a supposed Siem Reap expert friend, who said we MUST eat at this place called Indochine. Whilst we were there, at a rather quaint wooden bungalow, rather nice ambience, two buses full of white tourist came by and jettisoned their cargo, which should have clued us in. The food was exceedingly ordinary, I could have probably whipped up a better meal. Pomelo and crabmeat salad, prawn fritters, pork sates, caramelised pork (that tasted like it was caramelised with salt...and had to be sent back) .....largely unmemorable. 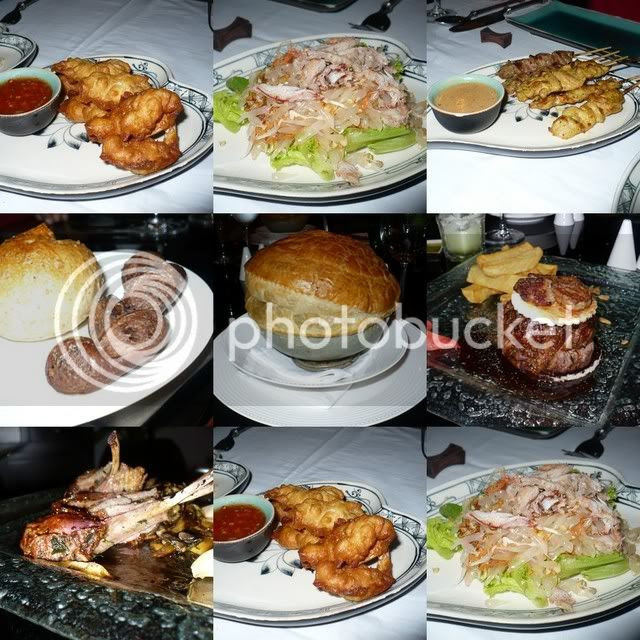 Dinner on the last night was at the Victoria Hotel, a beautiful colonial style hotel, at the restaurant called Le Bistrot, french inspired. I had the French Onion soup with puff pastry, which was excellent, and the beef fillet with foie gras. The foie gras was disappointing, the slice thinner than an anorexic Calista Flockhart, and saltier than the Dead Sea.

Okay, if I had to pick one meal to blog about it would be this. It was at the FCC, (Foreign Correspondent Club) along the riverside, a beautifully restored old colonial building, with about 31 rooms, in verdant greenery. The whole atmosphere of the place is charming, and made me feel like some indulgent colonialist screaming for a gin and tonic.

I had the potato and leeks soup for starters, a hearty thick broth, which coupled with bread, is enough for one as a main meal. Wife had the Prawn Ravioli for mains, which was swimming in a gorgeous thick seafood bisque. The bisque was divine. Prawny, crustaceany goodness. 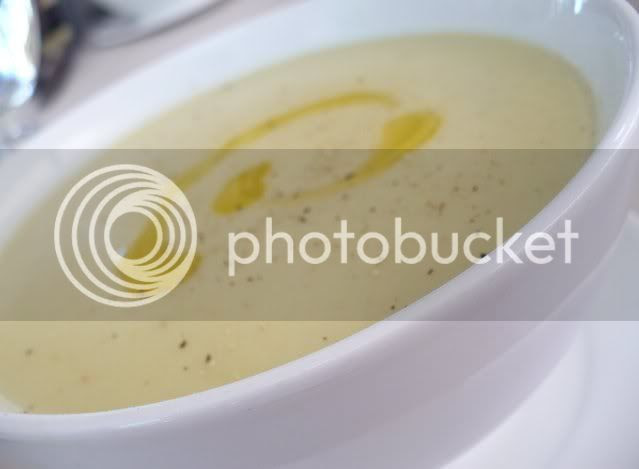 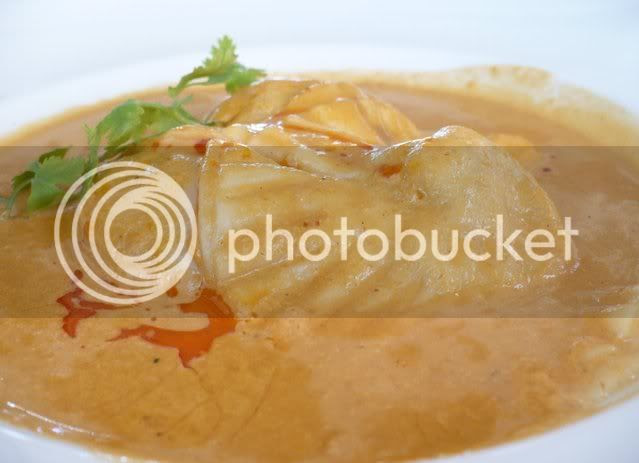 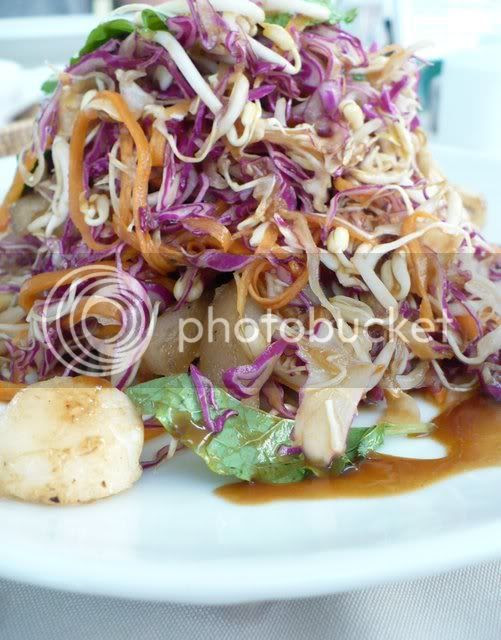 No prizes for what ingredient made this the salad of my choice. Okay, it was a bit too lardy (lardous? lardacious? lardful? lardorial? lardida?) even for me. Obviously pig in question had too good a life and never went to the gym a day in its life. But the combination was very good. Crunchy purple cabbage, beansprouts and shredded carrots gave the crunch, the dressing gave a tang, the scallops gave it elegance and the pork belly gave it completeness. 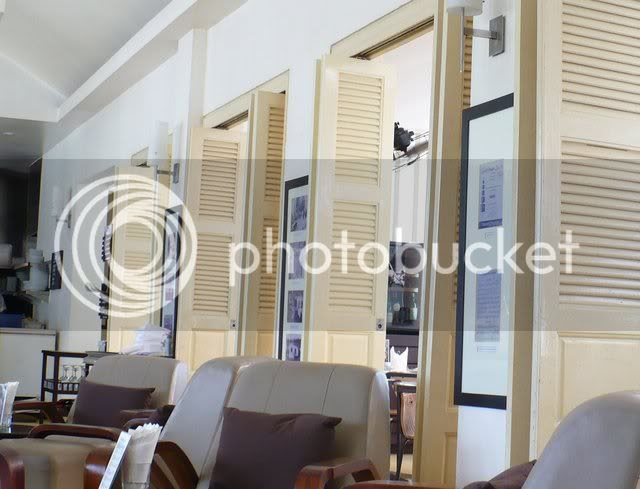 We adjourned to the lounging area for our ice cream. 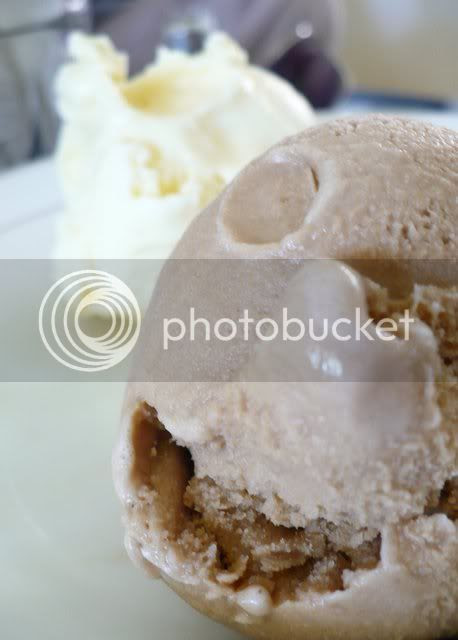 Deevine coffee ice cream with ginger ice cream, and chocolate and strawberry down below. A perfect lunch. 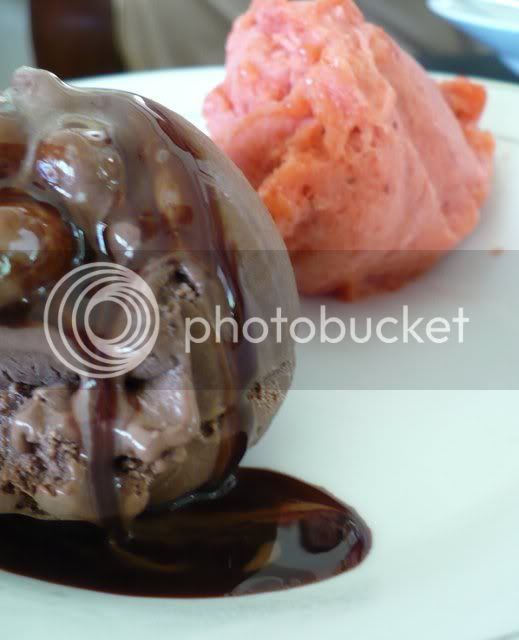 i wouldn't touch the market food too like you, not so much because of how it looks but scared diarrhea la hehe, anyway ... the rest of the places all looked good but for a USD18 bowl of noodle *gulp* .. too much leh

Who enjoyed those pictures of kids more than food? I have 2 arms up.
Don't-lah say cheapo hotel. Got swimming pool-wat.
I didn't dare take d street food there too. Not even fruits. =(

the combi of cabbage, beansprouts and shredded carrots sounds yummy!! hv to try!!!

Yalah, ada swimming pool and from pics, the hotel look quite good. And WTH with the scary fish... red eye pulak!

jason, actually the hotel is okay la, no complaints at all, its just that compared with the other 6 star resorts we were visiting and ogling....!!! at RM800 per pax, on air asia, for flight, hotel and breakfast, 4d 3n, honestly, its a damn good deal.

daphne, yes, yes, but i cant for my life place the dressing. it tastes sooo familiar....

tummythoz, you're still young la, should be more adventurous. uncle like me, better not be so adventurous. mind you, i wonder what foreigners think of OUR roadside hawkers and fare....

jojo, ya, even i only ate the lean parts of the pork...the fat was too intimidating...

imbitchy, hmmph, tell me about that USD18 per bowl of noodles. Told you, its the most exp noodles i've ever had. in shang palace, i could had a whole claypot for 3, with fat plump scallops, prawns, and sea cucumber!!!

wah, i enjoyed reading that, especially the last para on yr lard variations and how it completes you! :p

Wow! Lard in the salad! Now that would be the kind of salad I really like :o)

if i ever hold a halloween party, i'll get 'em some of the street food...especially the fish! love it! king's carrie would have loved it as a pet..i like the lard salad idea though...

nic, there's another pic of some snakelike food that i forgot to put up. but actually, as chinese, nothing really seems that bizarre.

wmw and nic, lard in the salad, now that's a oxymoron if i ever heard one.

sunshine, yes, i am descriptive hor.

Water! I finally made it to the end! Dear boy, have you not heard of editing?

Thanks for the creative descriptions...they certainly brought a rumble to my tummy. And the glorious pictures were eye candy for sure. Well, not all the pictures. Obviously some were meant for us to question the meaning of life, while others were meant to remind us to be thankful for what we have on our less than appetising plates at times.

Angkor Wat looks amazing, but I doubt if I'll be able to lug all that blubber around (and no, I'm not referring to Tim).

Lovely pics! After reading your post, I really feel, more than ever, that I need to visit Siem Reap soon! The meals sound rather disastrous but at least there was ONE good one. You crack me up lah!

I have never visit Cambodia yet; despite everyone around me had already gone there for a short vacation.
I have heard of the sad stories there and also interesting culture and food:)
Your pics were really great....but sorry that most of the food didn't really meet your expectation.

I recently came accross your blog and have been reading along. I thought I would leave my first comment. I dont know what to say except that I have enjoyed reading. Nice blog. I will keep visiting this blog very often.

aji, thank you for your kind words...do visit more often.