Apparently there was a time, when a fellow on a bicycle used to go around offering castration services for chickens. With a deft snip and thread, the deed is done, and this strapping young rooster HERE, .... 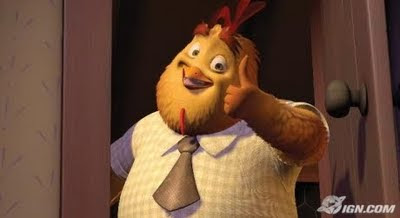 ..would not have been able to sire this little chicken here. 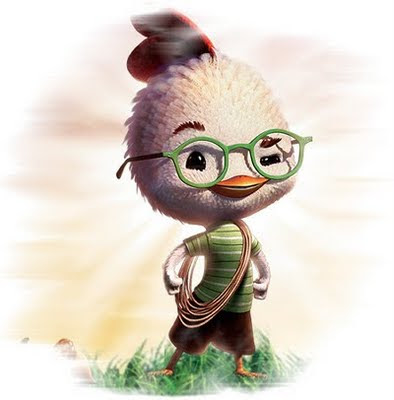 Now, the chinese are not the only ones who have no qualms about snipping off lineage (the roe and sperm of hairy crabs, for example) to satisfy the palate, apparently castrated chickens are called CAPONS in English. I just call them Eunucks.... a cross between eunuchs and cluck.... EUNUCK...

Apparently, the loss of male genitalia decreases testosterone levels in the chicken, causing them to get fatter, (oh dear, I should go check my testosterone level soon), ...as females have a higher fat to muscle ratio, according the the slimmest person on the table, CIKI.

Well, rewinding the tale a bit, we were invited for a food tasting of these free range birds, bred by the company called Sunshine Chicken, (presumably the roosters crow at dawn), helmed by Gerlad D'Cruz. The farm is in Kuala Lipis, where chooks are allowed to roam free, without stress, multiplying as they pleased, .... the equivalent of Malaysians with all our free land, as opposed to our poor Singaporean neighbours, all cooped up in HDBs...

The lunch venue was at Chef Tam, in Selayang, next to that famous seafood wholesaler, Jin Chwan. I had forgotten to RSVP the invite from Gerald, and had to tag along as the Queen's date, as her real husband, Bald Eagle, could not make it. Which theoretically means I don't REALLY have to blog about this, but the meal was so excellent, I simply have to share the good news.

We were first brought on a walkabout study tour of Jin Chwan.... a real marine treat for those who want to go diving but can't. Geoducks, alaskan king crab, moray eels, oysters, clams, prawns, fish of myriad variety, grace the tanks of this place. 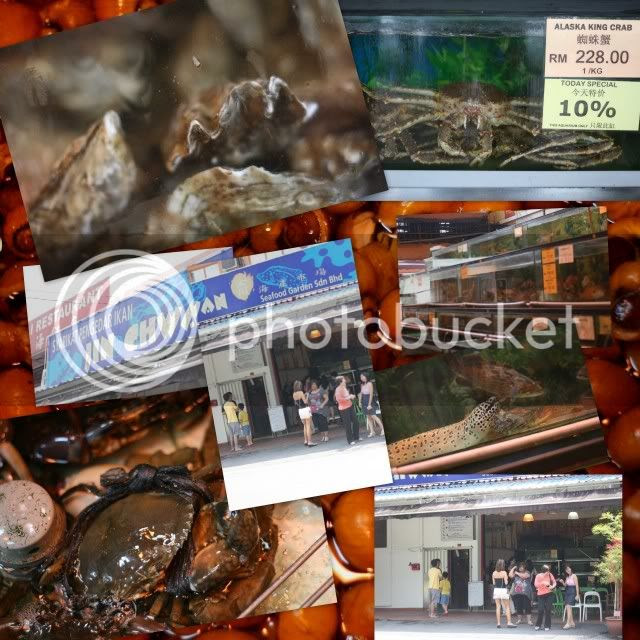 Our celebrities, who are late, make their grand entrance..... very you yeng huh! 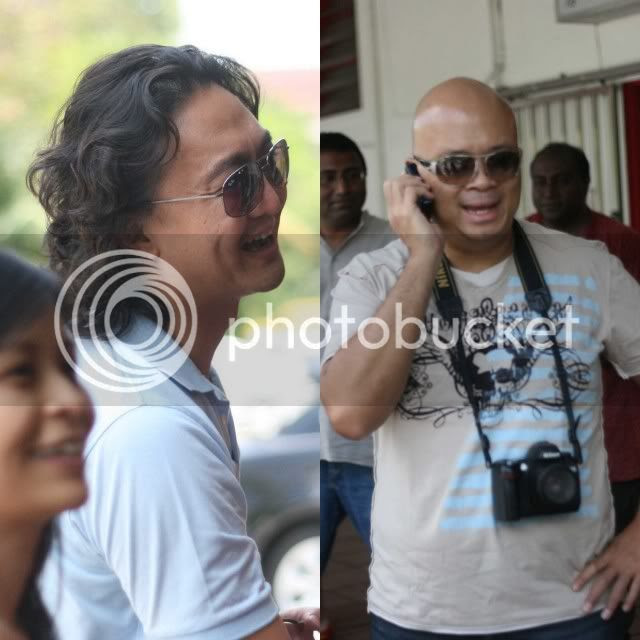 Such a celebrity couple, that one.

Most of the Wax Princesses found the 5 minutes in the heat too long, and quickly scurried back to the aircond comforts of the Chef Tam restaurant. 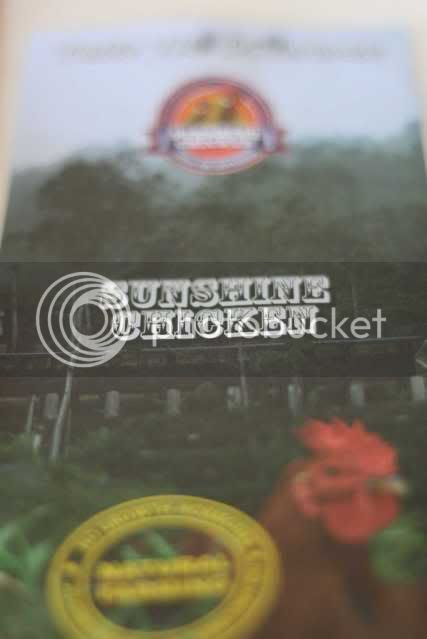 The brochure of the Sunshine Chicken. The farm as mentioned earlier, is in Kuala Lipis, and this prompted us to make sure we organise a trip there, afterall, fellow food blogger, THULE is based there, and I am sure would make a wonderful host. Gerald also very kindly offered us a tour of the farm, and the best wild boar curry ever. 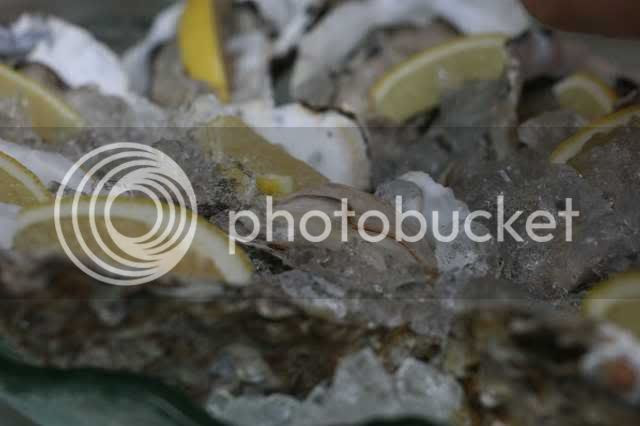 Huge plump Pacific Oysters were the perfect way to start the meal. Of course debates abounded whether small is better, or large is better, but there seemed to be an equal number who preferred small, and big. (oysters, I mean). Walking Wikipedia reckons smaller oysters are sweeter, Ciki likes hers plump and large, and they slide down her throat. 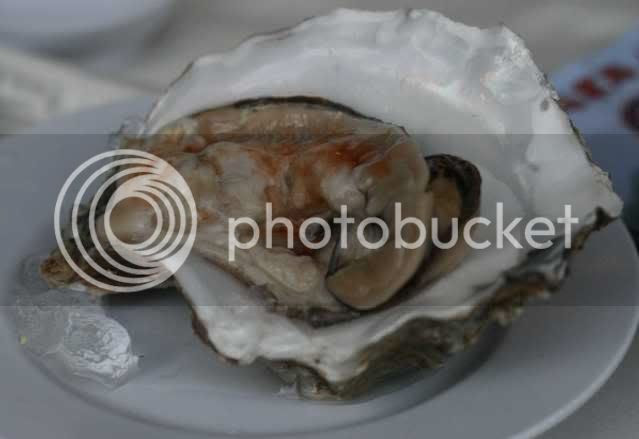 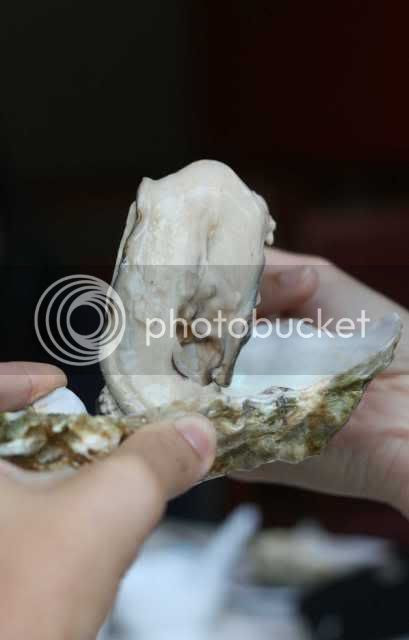 Well, they certainly were very fresh. The oysters, I mean. And not fishy. 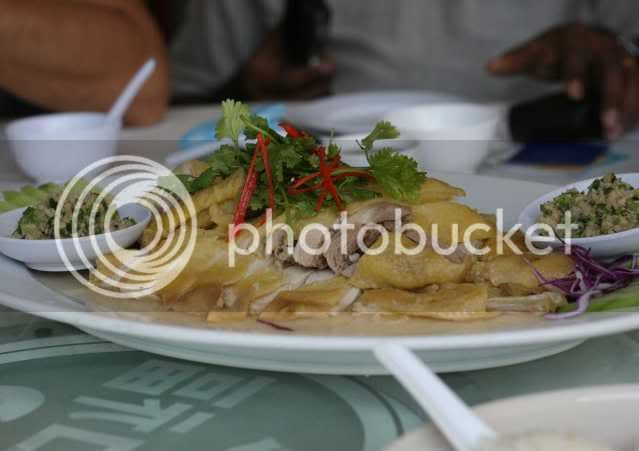 The highlight of the meal, the Yim Kai, or EUNUCK. Absolutely fantastic. Lovely golden yellow skin, with a layer of free range fat beneath the skin, and gorgeous flavour of meat that you will never get in a supermarket chicken. Texture wise, incomparable. Firm meat, with a real taste of chicken. Excellent. It's my first exposure to an EUNUCK. One wonders how one will eat normal chicken after this. 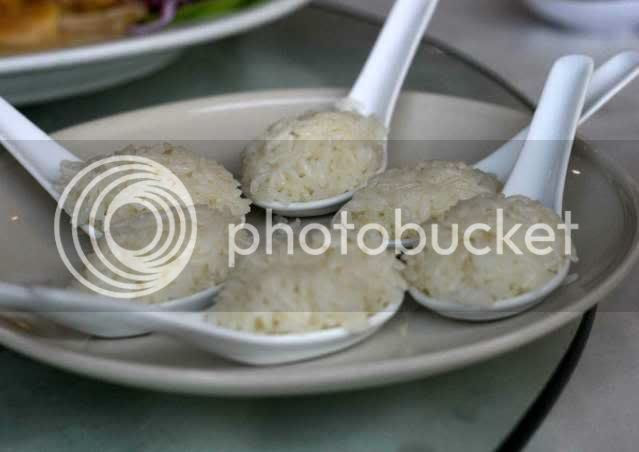 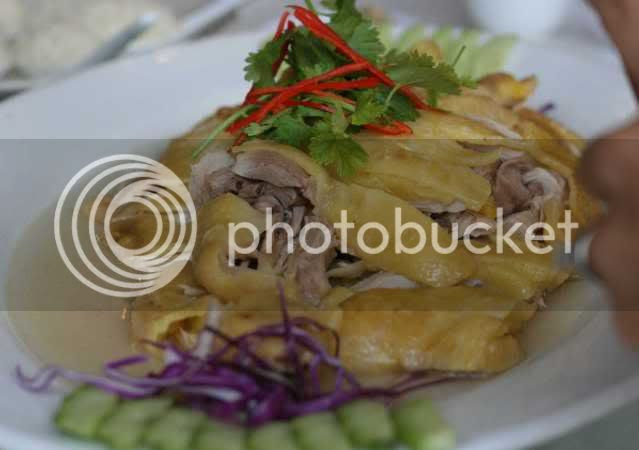 Just look at that chicken. I can understand the hype. 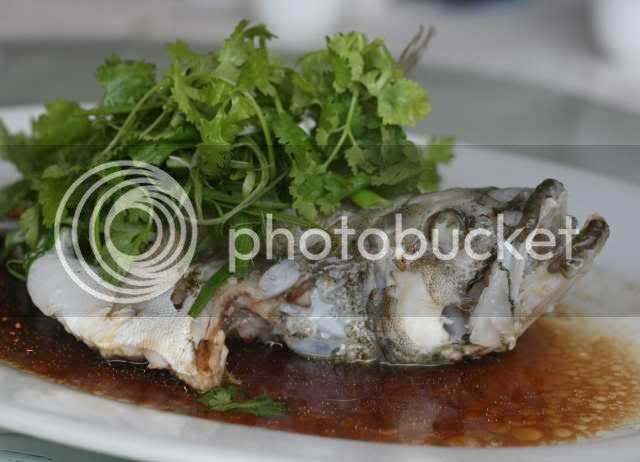 Deep sea grouper. Again, lovely freshness to it, and the flesh firm, and sweet. Steamed to perfection. Originally someone said it was a Jack Something Something, which was an utter red herring. The NEXT table had the Jack something. (not "OFF"). Oh, did I mention the cast? Babe in the City KL, Pure Glutton, Gourmet Garden from Penang, the Nomad Gourmand, our dear Hooi Khaw, Cumi & Ciki, Just Heavenly Pleasures, ROKH, and the Queen of the DSLR herself. Quite a glittering gathering. 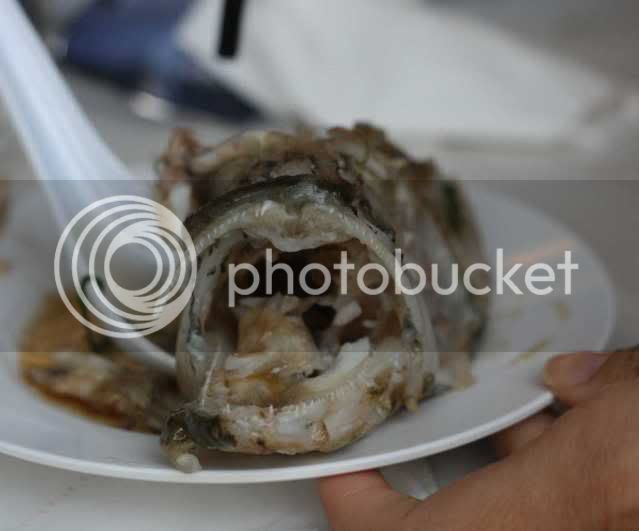 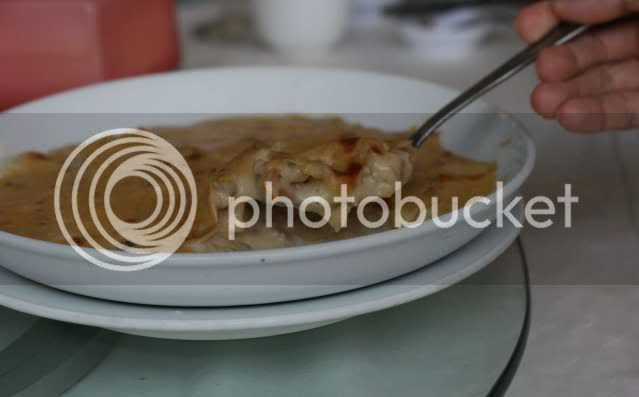 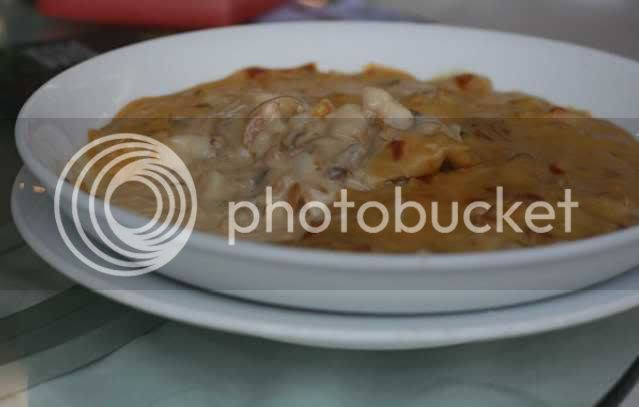 This would have been my least favourite dish I guess. Not because it was bad, but it seemed a bit inconspicuous. Japanese snails, in a creamy cheese sauce. Mornay, almost. It was unanimously agreed the cheese sauce drowned the taste of the snails, and a light sautee with garlic would probably have been better. 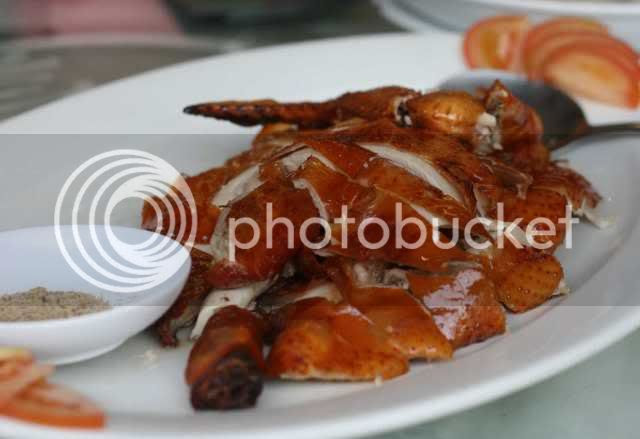 Sunshine Chickens also do breed normal chickens, and this was it. A lovely roast crispy skin chicken. Again, the natural taste of the chicken, and texture, outstanding. 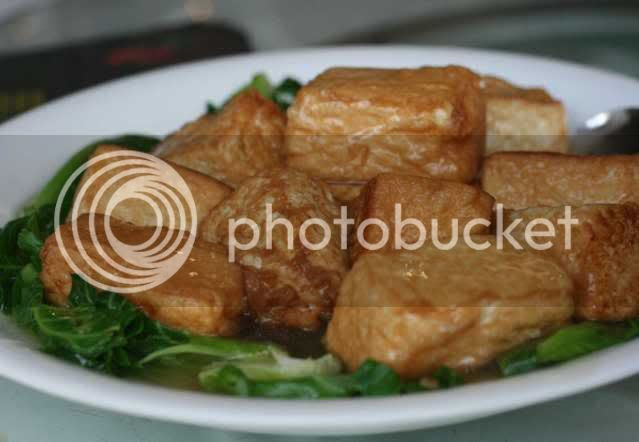 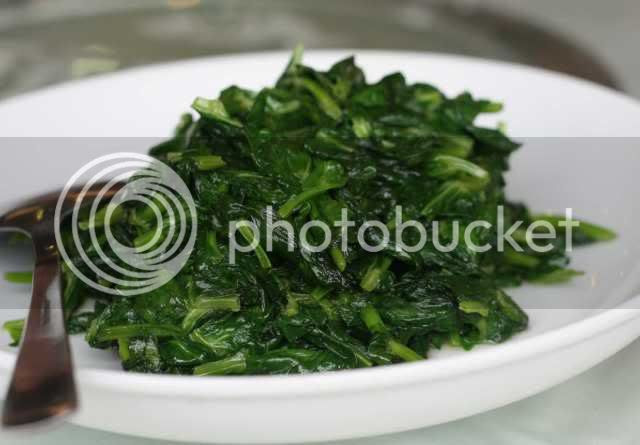 Something like the Sabah fern vegetable. Not sure what it was, but it was good. A slight slimy texture, but such a healthy feeling as it passes your throat. The Queen, not a veggie person, had a few cursory strands, and gave me the rest. 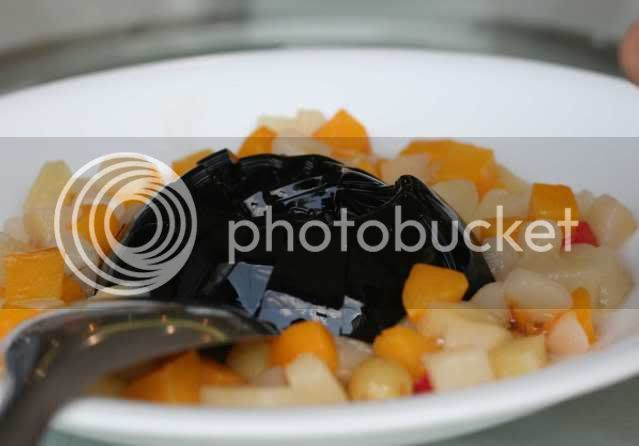 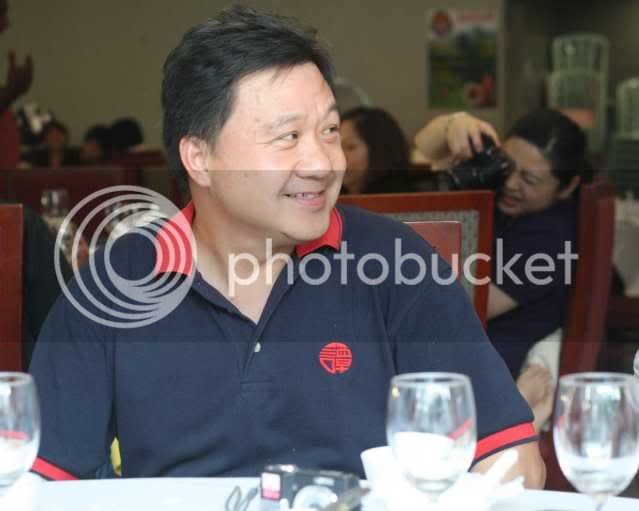 The very affable Chef Tam. According to him, (and I had to play translator to Her Madge, sitting next to me....cis, her marder is chinese oso dunno how to speak), he has no one signature dish, but specialises in the cooking of seafood. 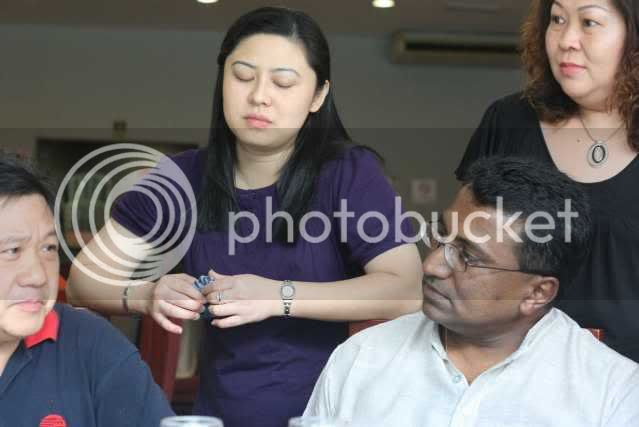 The horde of adoring female fans surround the Chef.

What a perfect way to spend a lazy Saturday afternoon. Thanks Babe for the white wine....it WAS from you right? And thanks Gerald for having us.

Well, if you are looking for excellent quality chicken, you should contact Gerald D Cruz at 012-2085590. I am already thinking that the castrated chicken would make a great turkey substitute for Christmas. So much tastier, and probably a fraction of the price. Them EUNUCKS can grow up to 5kg.... that's one large chook.

[NOTE: The Eunucks are available now on offer, at RM25 per kg. It is usually almost double the price in the markets. So chefs out there, give them a call now!]

Chef Tam is located along the same row as Jin Chwan, and judging by the food, serves excellent Chinese food at affordable prices. The seafood is purchased at Jin Chwan, and cooked in Chef Tam.

Posted by fatboybakes at 3:35 PM

i wanna go there!
i am hungry now looking at the chickeen! both the yellow one and the roasted one...

dont say no 1 leave comments for u ok?

this was the eunuch chicken u were talkin abt on saturday..selayang abit the far to drive?

thank goodness the fish was Jack Pearl not Off! LOL

sorry for unable to make it, looks good

I was still dreaming of the fab taste when I made chicken soup using regular chicken. Was so bitterly disappointed at the insipid taste and mushy meat. Am sorely tempted to buy the organic poulet from france at RM126.65 per bird..

Again never invite for yummy road trip. Who do I blame this time?
:P

Ciki said...
This comment has been removed by the author.
9:53 PM

EUNUCK! i likey.. next time someone cuts me off on the road i will wind down my window and yell YOU EUNUCK! teehee..

Ah Pa, better check if ya balls are still there and Ciki betta check if she's grown some balls! LOL

Eunuck! So smart lah you.

Btw, i love the shot of Nigel&Allen. So "mengumumkan ketibaan yang amat berbahagia..."

Laughing my balls off at this post. Heh. Good one ah pa ;) Seafood and chicken. Comfort food the soul.

monkey, it DOESSSSS doesnt it!!! glad i'm not the only one who thought so.

as for the balls, yeah, still intact thankyewberrymuch for your concern.

ciki, done.... yup, and eunuck rhymes with a lot of other swear words too...

superwilson, yalar, you missed a great meal, and ahem, of course great company.

babekl, YA YA, thanks! JACK PEARL!!!! couldn't for my life remember. was it good ah?

good point nipple joe. i also dunno how much those chooks are.

keropokman, yup, it was darn good. however, i am not sure if that's a regular item on the menu. must check la.

no no, those arent rhymes. i meant like duck.... what the duck! or muck.

yeah, chef tam is really good with seafood! we used to frequent his restaurant back in early 2000. u must try their superior stock lobster or crabs. orrrrrggaaaasssssmmmmicccc! the cheese crab oso good. milder in taste and different from king crab.

selayang. u guys are getting nearer to kepong d...yay!

yup, hairy, and trust me, your name came up a lot.
actually i used to go to jin chwan and its surrounds quite often, before they opened in damansara kim, and closed down. i even got jin chwan member card.

Anyhow, this was a good day out with friends ;)

yeah, a full chicken (hehe, satu ekor?) would cost about RM200 in the restaurant. easily.
i wasnt exposed to this special breed of ... erm, castrated cock (aiks?!) until my fren who went to HK claimed that the chicken is simply OUT OF THIS WORLD!

ohmygosh! 2kg of eunuck is RM100!!??? exorbitant is the only word I can think of... as the price for kampung chicken (castrated)that I get is definitely lesser! in that case I might consider to operate a chicken farm here myself.. since the land is abundant in Kuala Lipis! Lol... anyone interested in JV? I need the expertise here...

Oh, the Jack Pearl was superb ;-)... and not cheap, i gather. Have finally put up my post... still recuperating from surgery though. Nice catching up with u guys that day!

Great blog as for me. It would be great to read more concerning that topic.
BTW look at the design I've made myself Overnight escorts