We Live In Eggs citing Times 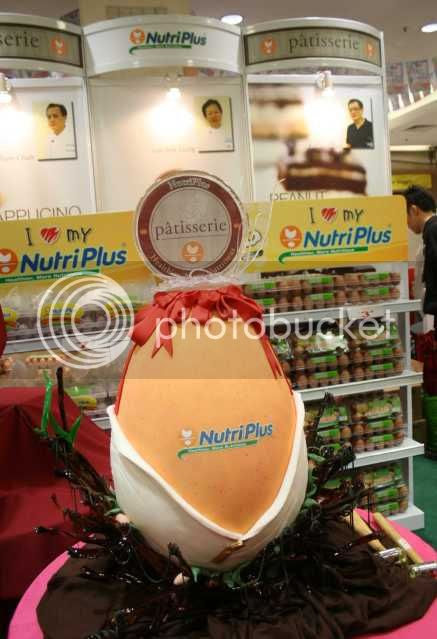 Humpty Dumpty sat in the mall
Thinking life would be just a ball
Then all these people
With hammer and chisel
Cracked him and broke him in front of all. 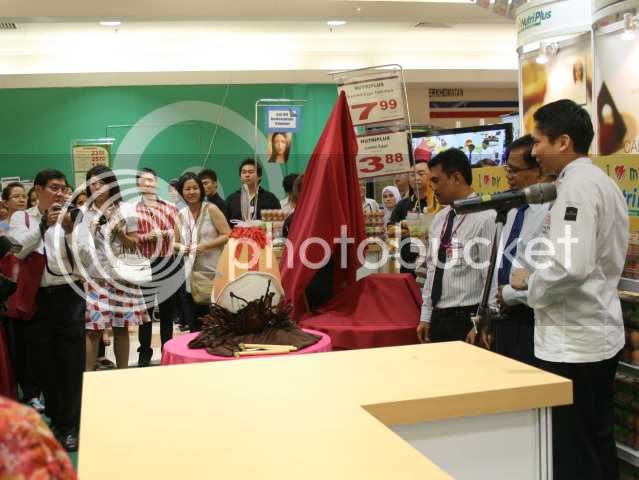 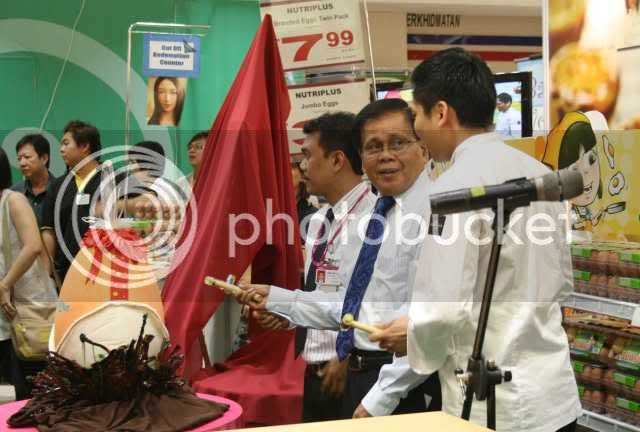 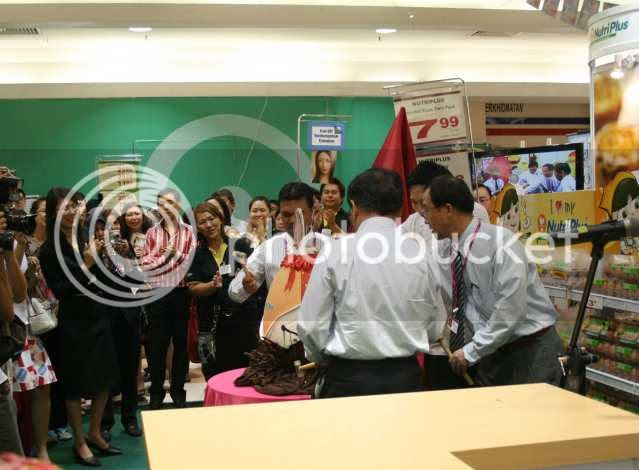 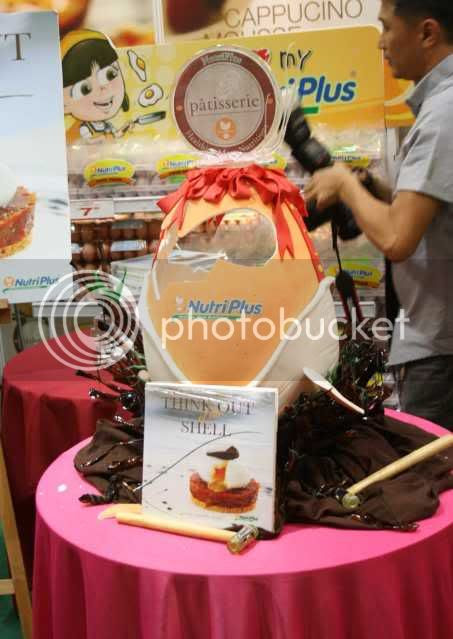 Poor Humpty, if that was indeed what happened. But don't worry, no eggs were harmed in the production of this blog.

You see, a few months back, Ryan Khang of the Cooking House and My Nourishment magazine, asked if I would be interested in contributing a few recipes for this collaboration cookbook between Nutriplus and a few regular chefs who taught in Cooking House. I represent the "non-chef" category, much like the laity and the clergy. Celibacy not being my thing, I clearly am the laity. So, I thought, why not, afterall, it will be decades before I finally realise my dream of appearing in print, in a cookbook.

Time flies by in the blink of an eye, and before you know it, the book has been gestated and it was birthing time. Or in this case, hatching time. 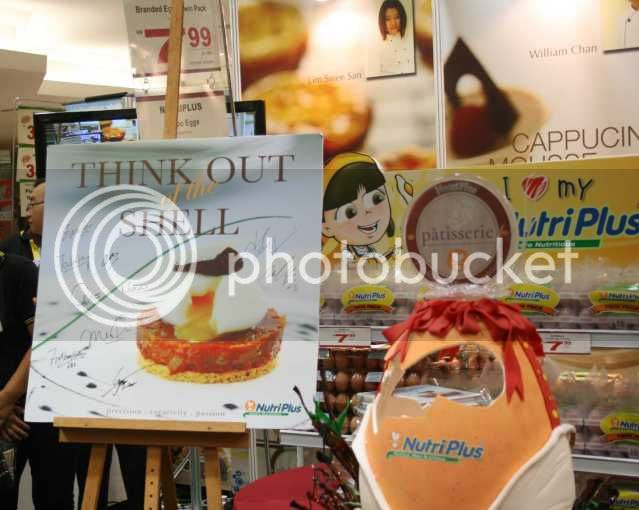 Ta-dah, the unveiling of the book, which sat within the giant egg. Hypothetically, if the egg came from a bird, you'd be looking at a Garuda or Pterodactyl. (yes yes, I know they're not birds). 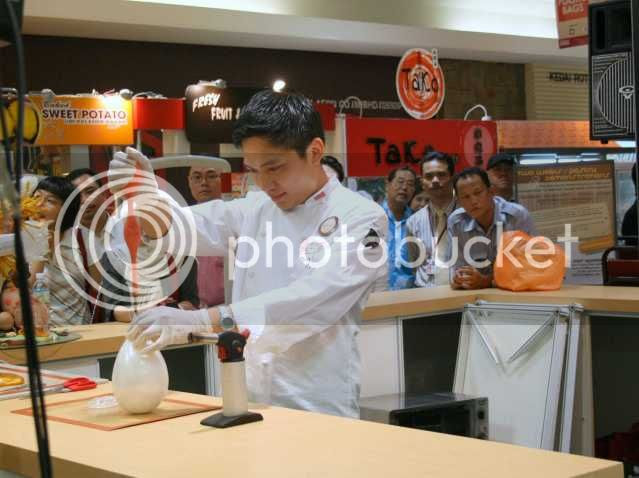 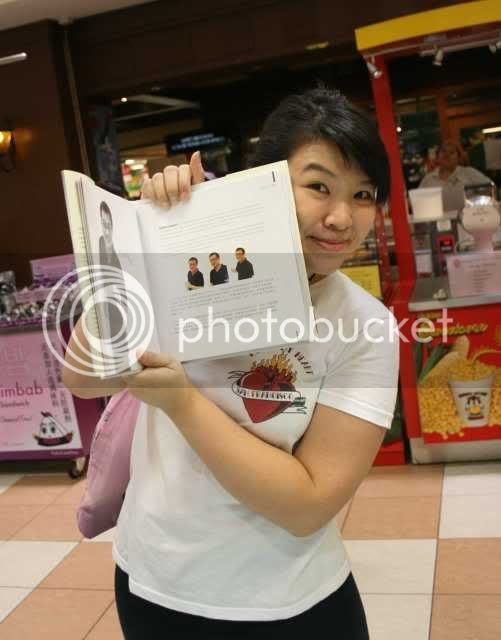 A rather pleasant unexpected visitor. Who actually came to see one of the other contributors, Swee San, that sultry looking pastry chef. 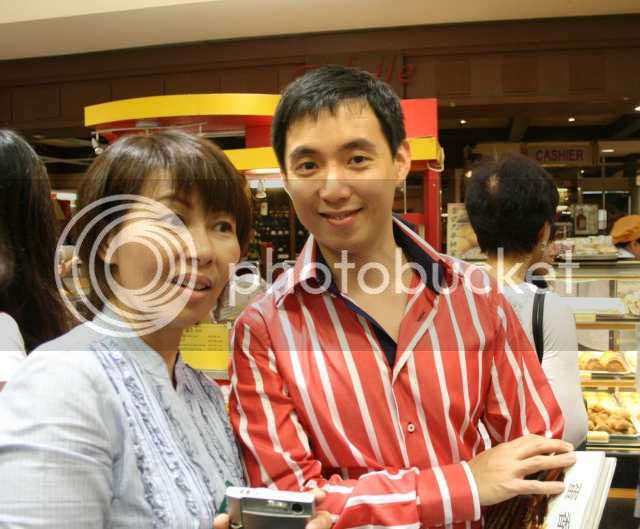 Ryan and Gina. Gina is my Magimix see foo. This woman makes cooking and baking look so simple. Of course, it isnt THAT simple. 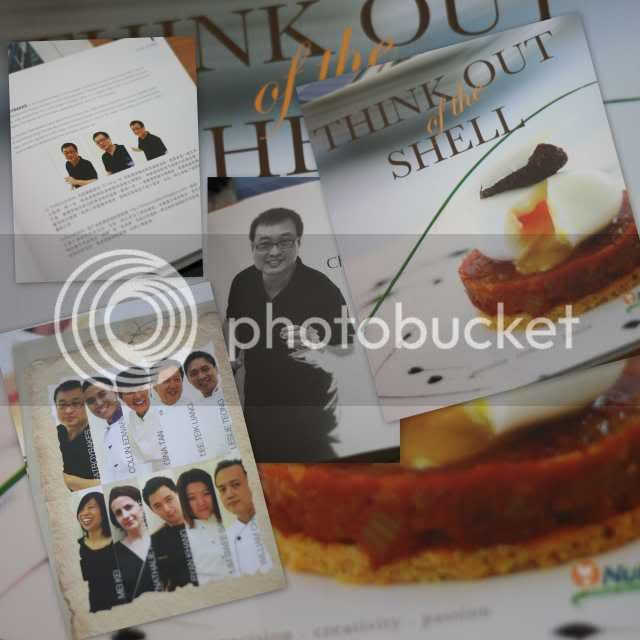 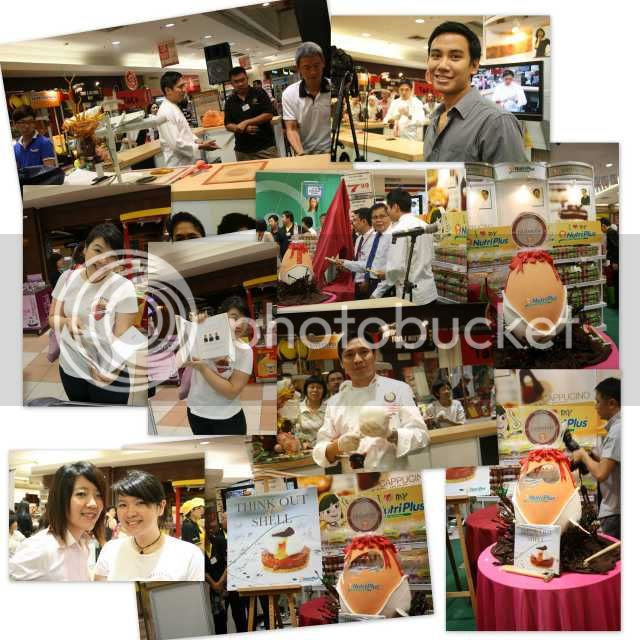 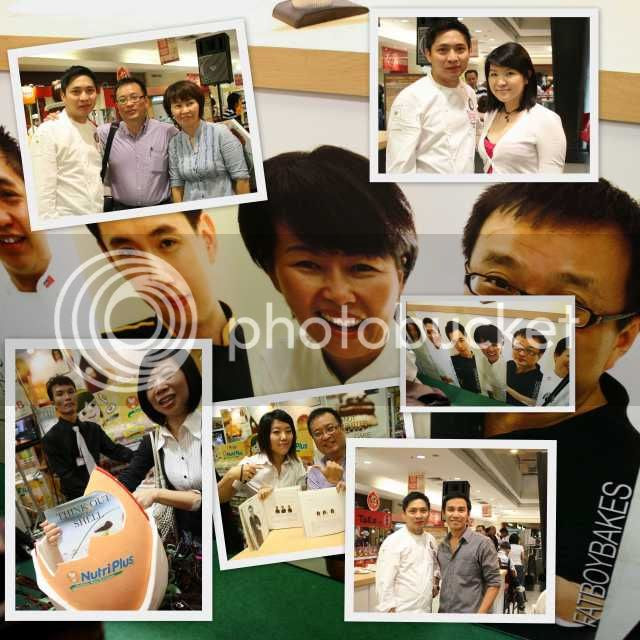 Anyway, Leslie, the celeb chef, was rather chuffed to meet our delectable Su. ;) Apparently he is her idol as well.

The book is available as far as I know, for now, in front of the Jusco Supermarket in Mid Valley Megamall, at the Nutriplus booth. It is selling for RM70, (hard cover la), but if you buy RM30 worth of Nutriplus products, you can buy the book for RM35. Makes sense to buy the products.

There is also a series of baking demos by all the contributors of the book at the booth, over the next two weekends. 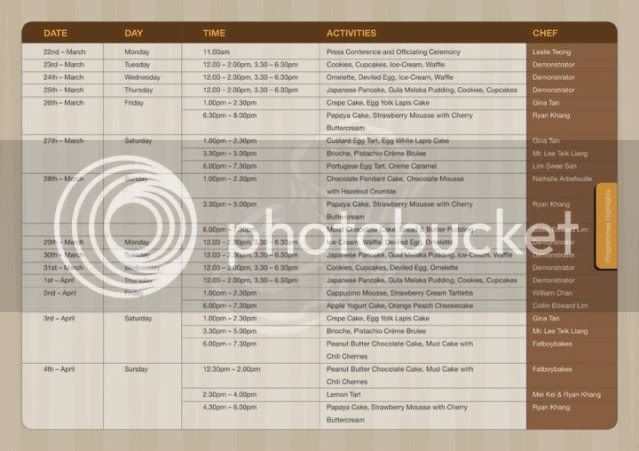 Special thanks to Ryan, Edyth and Mei Kei of the Cooking House for always being so supportive and letting me be a part of this fun project.
Posted by fatboybakes at 1:06 PM

Ah... first it was radio. (yes, I heard it) Now a cookbook.
Are you going to have a cooking show soon? On AFC?

Congratulations to all the contributors!

Eh what else does Nutriplus sell aside from eggs? I can't fathom buying RM30 worth of eggs for just me and Tim. We'll be shitting our eggs within a week.

ahpa .. u look really great. i don't know why u bother to hide ur face, when 1. it looks hamsum 2. its all over the book!

anyway congrats ahpa.. you are famous!

Wah I'm so proud of you Ah Pa! Now I can go to the playground and say "My Ah Pa's better than yours!" :P

Congrats. You have no idea how happy I am for you.

Oooh.. so GQ.. ^_^ Now how many non-chefs can claim fame to a cookbook eh? :) You da man! Can put at the reading corner in your resthouse for your guests to peruse over scones and tea..

Wow! Congratulations, FBB! I can't wait to check out the book! Hopefully you can spare 10 seconds to sign my book lah. Celeb d mah. :)

You are an inspiration!

hairy berry, couldnt have done it without all your constant support and lurve.

monkey, ah boo la, not ah san...like bride laidat hor. you so observant. i didnt even notice until you pointed it out. she changed to take photo with her idol, leslie teong.

yin, hahaha, both words are foreign to me.

J, you revealed my real initials in your comments!!! GACKKKKKK!!!

ciki dear, where i got hide face?

thamby, they got a variety of items la, sausages, nuggets, ...basically i think derived from the chickens that can no longer lay eggs.

keropokman, what chance do i have with AFC when one of my dearest friends chatted with the owners of AFC and never mentioned me even in a whiff of passing?

LFB, dashing? is that an adjective or a verb? yes, it does look like i'm dashing somewhere hor!

Congratulations on being one of the yummy chefs!... And please don't forget us when u become a super celeb ok? (GO FBB!)

Will you sign my copy? I see cook show in you not too distant future :)

can't believe that eggs nowadays also require branding.. of course with those rich Omega-3 stuff and so on :P

Your pic in the book captured you really well.

Congrats. Must pop over for your cooking demo. Since its the last one of the day, we can go makan after.

Congratulations FBB!! Another item ticked off the list of "seemingly ambitious things to do before I start to grey and sag which turned out to be, hah, quite easily achievable after all!" We can only all be so industrious...

Oooo!! Congrats! Only one place selling it? Hope they get it distributed to the mainstream soon! In all bookstores!

TNG, i not sure la, when or if it'll be in circulation. maybe its like those best seller books, hardcover first, then few months later paperback version come out. hahahah.

minchow, actually in that list, (a lot of things unachieved), the book thing was a whole book, not a 1/10th thing. so cant tick yet.

thule, ooh, u should try the nutriplus jumbo eggs. must have been laid by one mother of a hen.

unkaleong, cookshow? well, we have friend who rub shoulder with AFC bosses and did she mention lil ole me? NOOOOOOOOOOOOOOOO. how will i ever get there...HOWWWWW I ASKKK!!!

Wah, fehmes already, now can see you all over Jusco lol

The "GQ look" is synonymous with classic cool and sophistication..

will run over and buy RM30 worth of eggs and sausages!!! and of course the book, congrats!