Hoofed - The Place For the Big Bad Wolf to Hangout

Located above Tom, Dick and Harry, that famous pub in Taman Tun, in retrospect now, I can't help but wonder if Tom Dick & Harry were the names of the famous Three Little Pigs, from the fairy tale of the same name. Well, we all know what happens there.... the predator, the Big Bad Wolf, chases them down one by one like a rabid stalker, and succeeds in destroying the habitats of Tom & Dick, the two lazy pigs who built their houses from Straw & Wood.

Harry, on the OTHER hand, built a house of BRICKS, totally, not unlike this ceiling, of this fine establishment, HOOFED, where the ceiling of bricks is reminiscent of an underground cellar. But sadly for THIS lil pig who built HIS house of bricks, twas not enough to protect him from the onslaught of greedy babitarians that roam this cruel world. 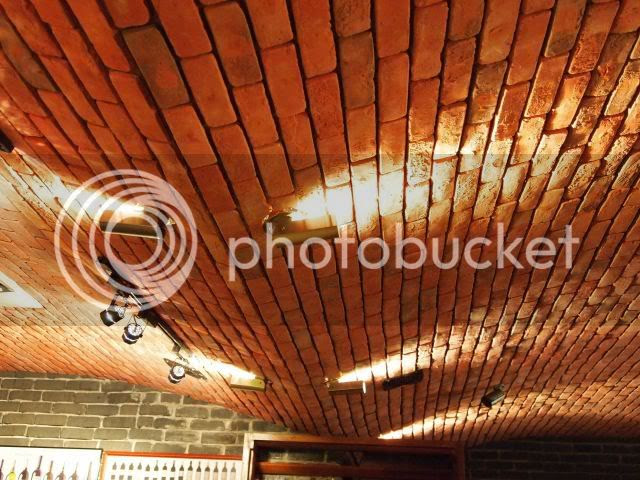 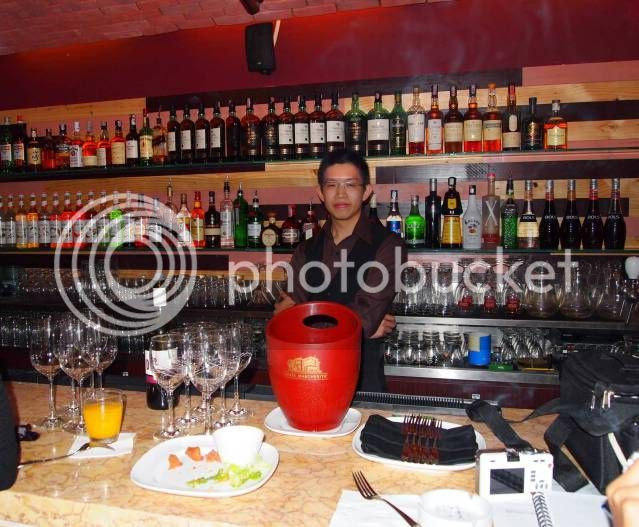 Awaiting the Pearly Piggy Gates of Pig Heaven, is Shawn, that dashing fella. a mixologist, who took leave of Senses. Not his senses, just Senses. 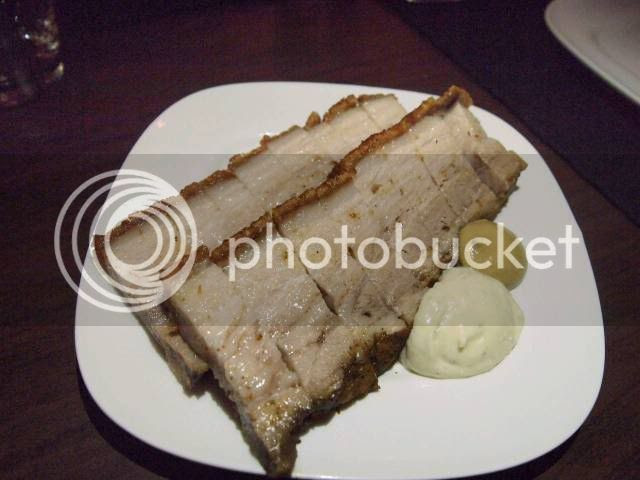 I was late, so I didnt get a shot of the nam yue belly pork, crispily fried and screaming for some fine ale to accompany. However, soon afterwards, this plate of glorious glistening siu yoke was plopped in front of us. It's different from your usual siew yoke, and seems to be from a different cut of meat. For one, the pieces seem rather long, if you know what I mean. Belly pork is quite thin, (as in opposite of thick, not opposite of fat), and you dont get such deep pieces with belly pork. 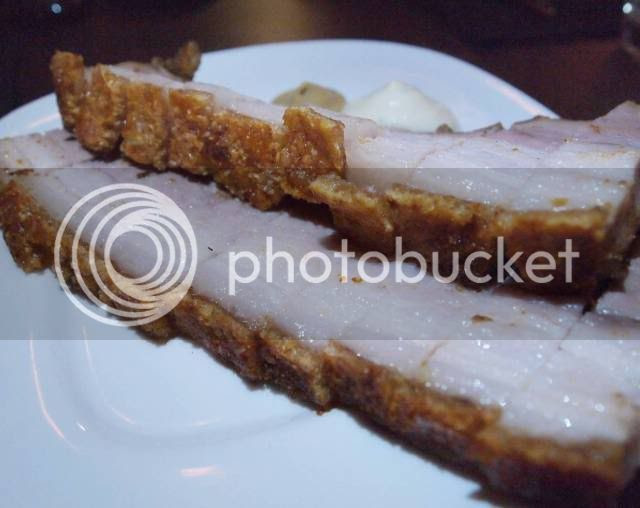 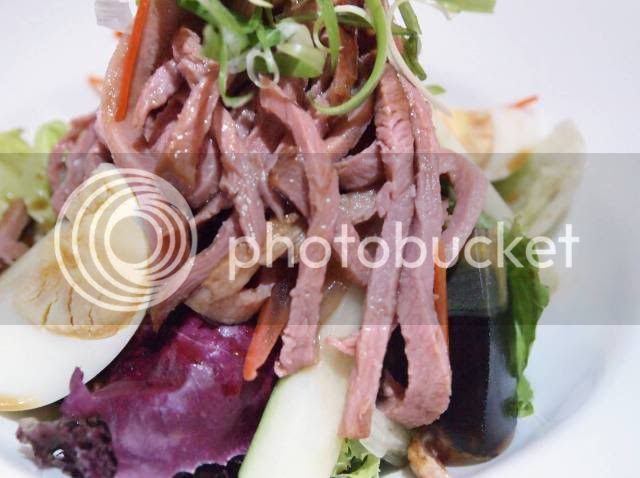 Ah, something different. Smoked duck salad with century egg. The duck is a great way to unhealthy-rize this salad, and the century egg, well, just completes the job in one fell swoop. An unhealthy salad is a great salad. And don't you forget that! 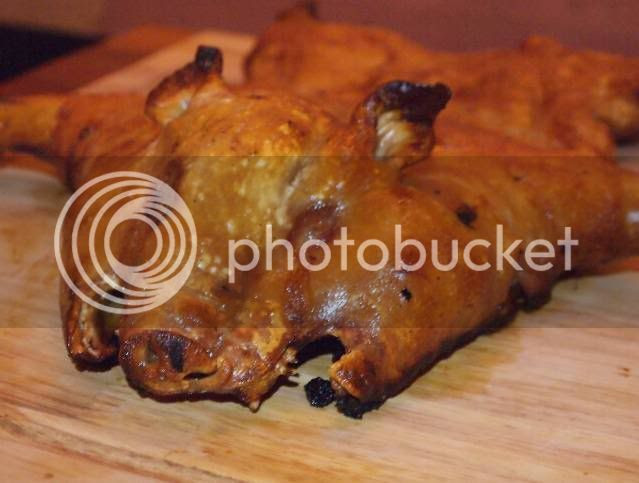 A mixture of reactions was evoked when this little fella was served. Mainly the sweet girls, namely Alison Victor, and Memoirs of a Chocoholic, whereas the guys, Walauwei, J2kFM (nice meeting you finally, by the way), and myself were a bit more detached to the situation. 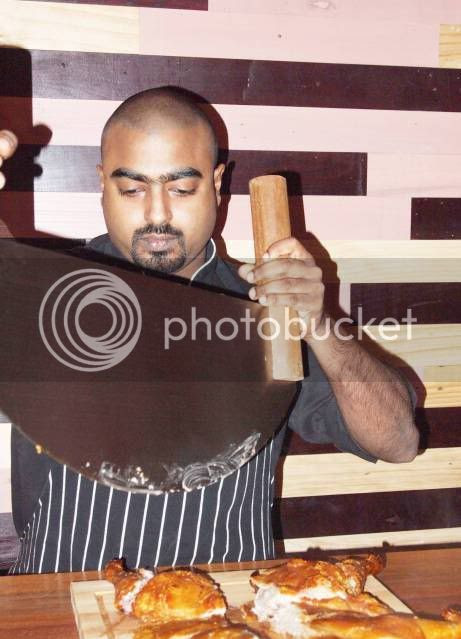 The giant mezza luna kind of contraption, used by Chef Tim effectively as the executioner beheaded Queen Anne Boleyn, was used to behead the suckling pig, and chop it up into individual portions. That sharp blade is preferable to using ceramic plates and breaking them with that cacophonious sound. 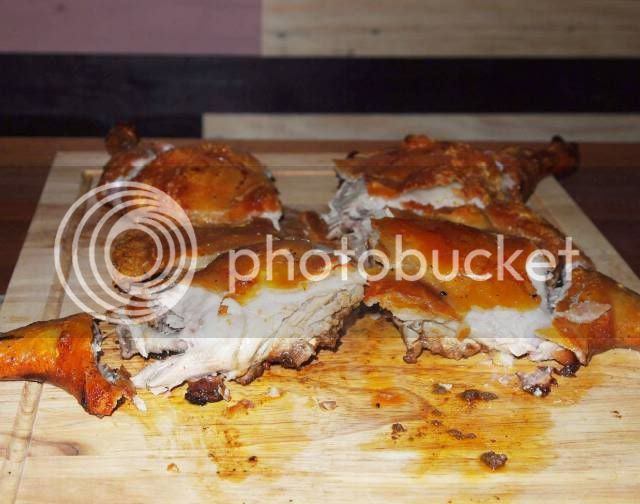 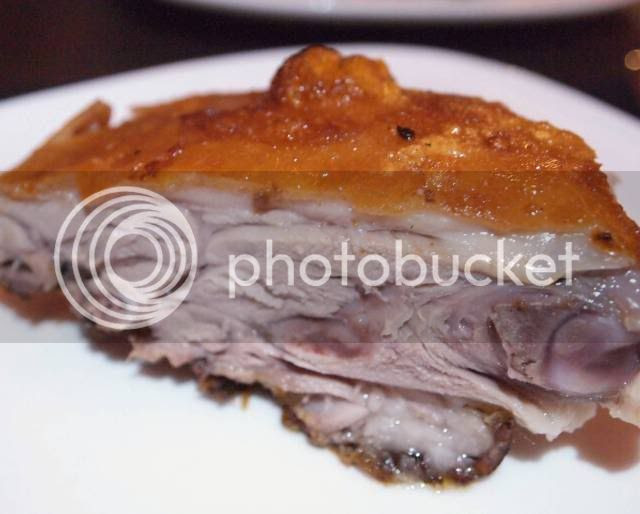 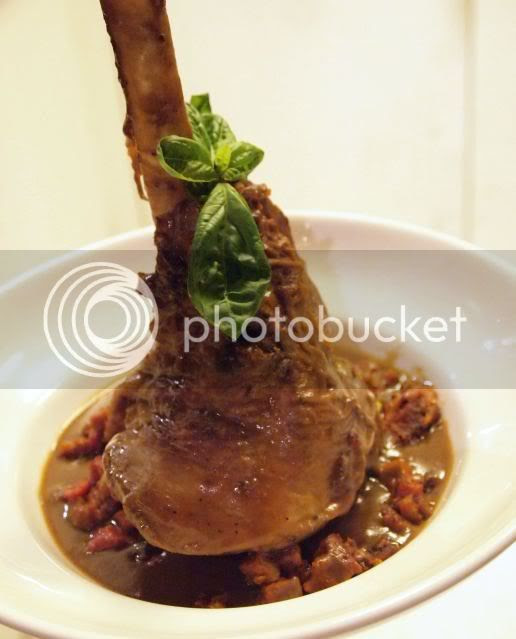 Lamb Shank..... actually, serving other meats in this situation is like asking ...errr... the winner of akademi fantasia to sing in a Whitney Houston concert as an intermission act. Completely overshadowed by the star of the show. Okay, maybe that was a bad example, seeing as to how her last concert was a disaster. But you get my drift. 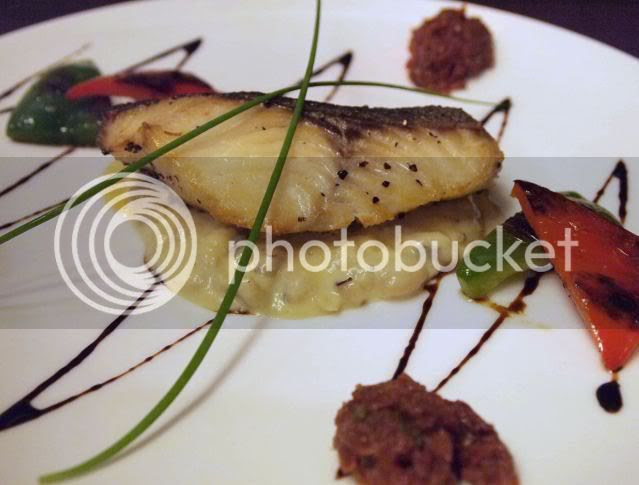 Pan seared cod...this dish was polished up rather quickly, perhaps too much land animals made the sea creature a welcome change. 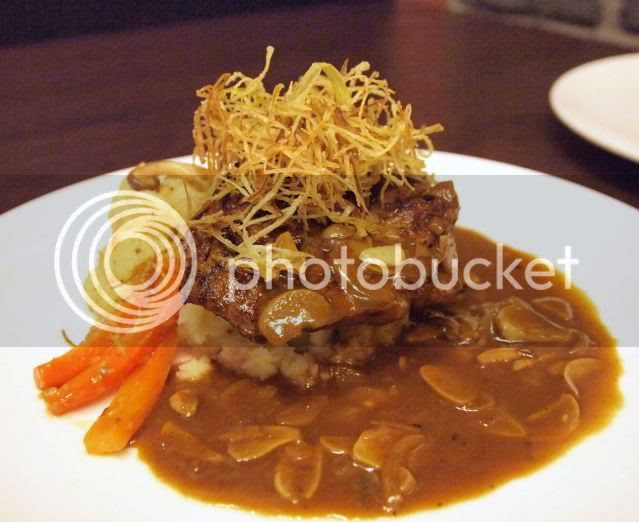 Hainanese Style Pork Chop. They use a really lean cut of pork loin, I think, for the pork chop, which as a good Malaysian Chinese, I have to object. Pork without fat is like chinese new year without ang pows. 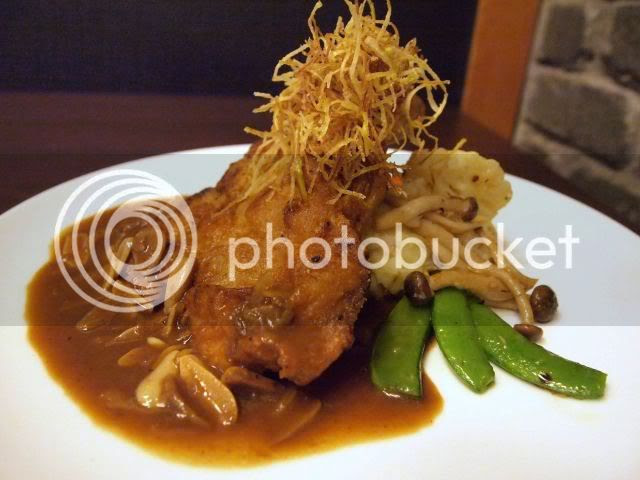 Hainanese styled chicken chop. The chicken was really quite good, moist, and the sauce flavourful. Not a bad alternative if you are having a no pig day. 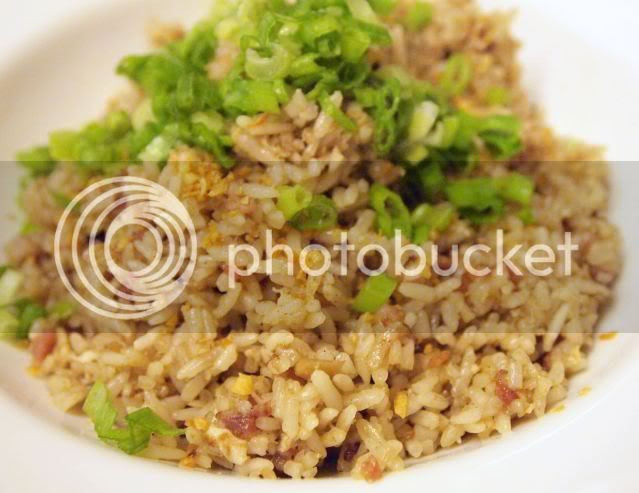 A cool surprise at the end of the porcine feast was this piggy fried rice, with pig sausage. Yummy. 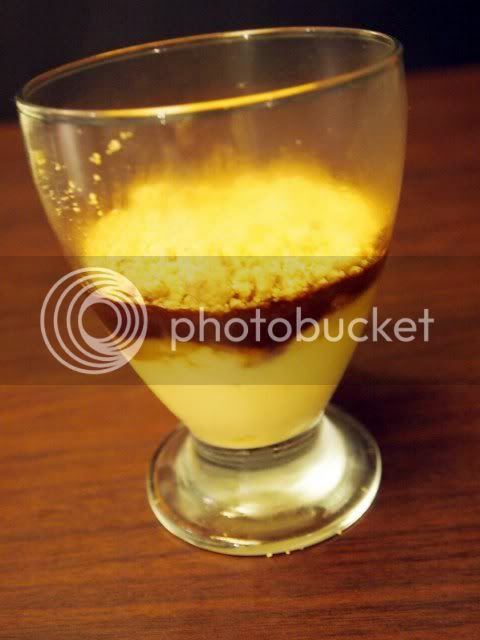 Their signature dessert, Bananarama, that is topped with a secret topping that no one could quite guess. The owners, Colin and Ernest, take pride in the fact that their recipes are tried and tested weeks before opening, fine tuned to perfection. Incidentally, those bricks on the ceiling were brainchild of Colin, and each brick (over 9000 of them) are individually screwed into the ceiling. 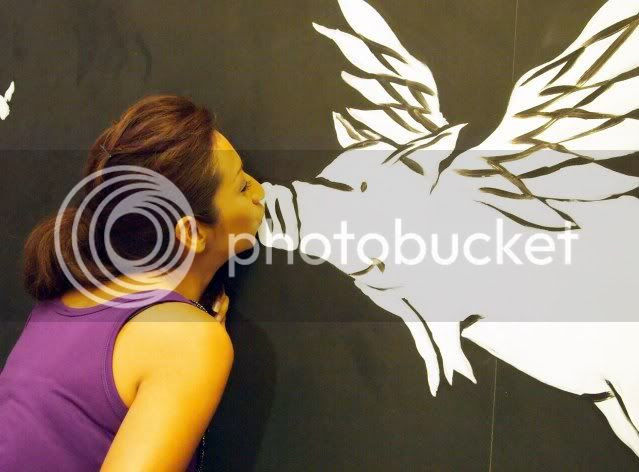 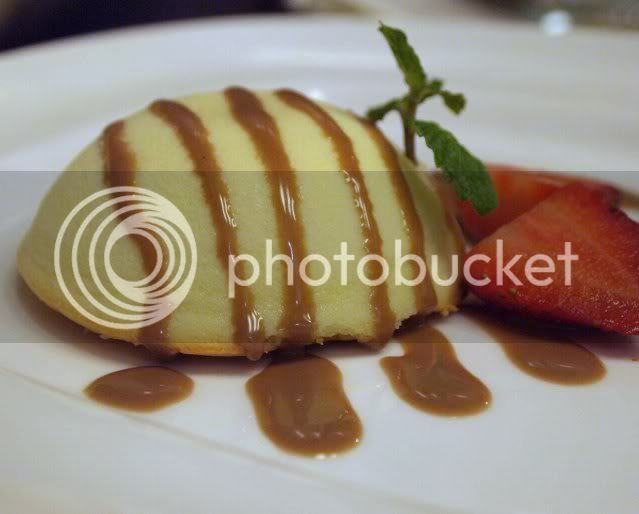 Baked Cheese Cake...would have been lovely if it wasn't for the fact that we were already force fed like geese reared for their livers... 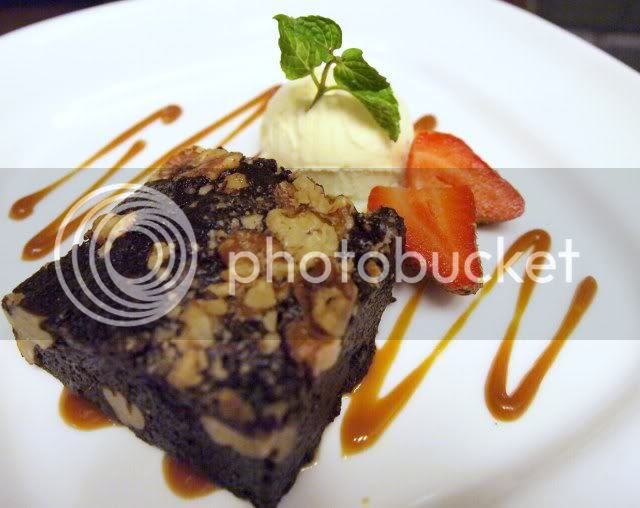 Chocolate Brownie With vanilla ice cream.... again, not in a position to objectively judge the desserts...you cant when your stomach is about to explode. 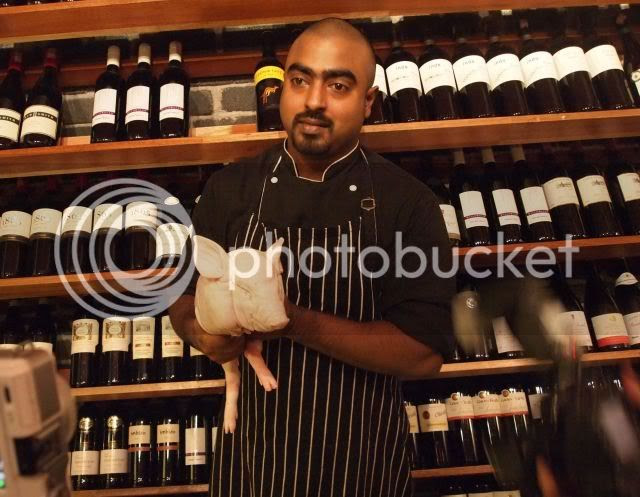 Ah, saving the best for last. Colin asked Chef Timothy to show us them baby pigs, which of course, drew pangs of guilt from some of us. Fortunately them pangs lasted all of 10 seconds. 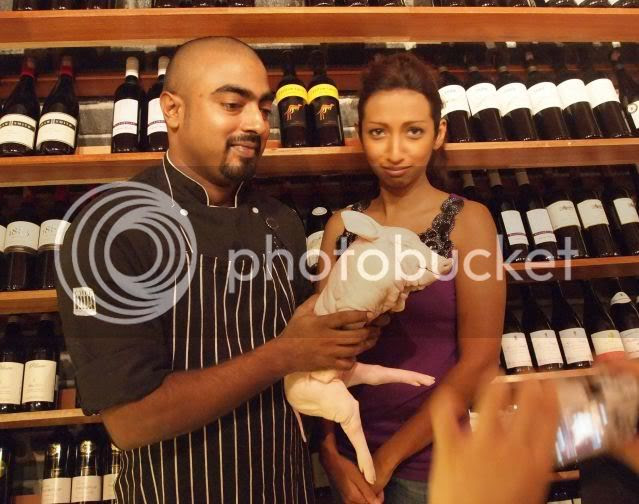 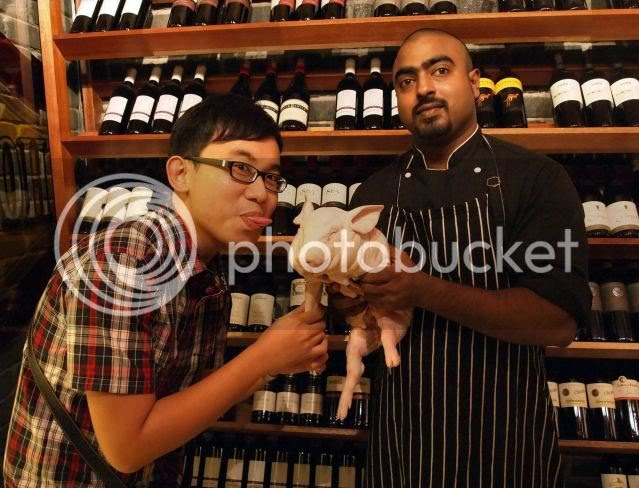 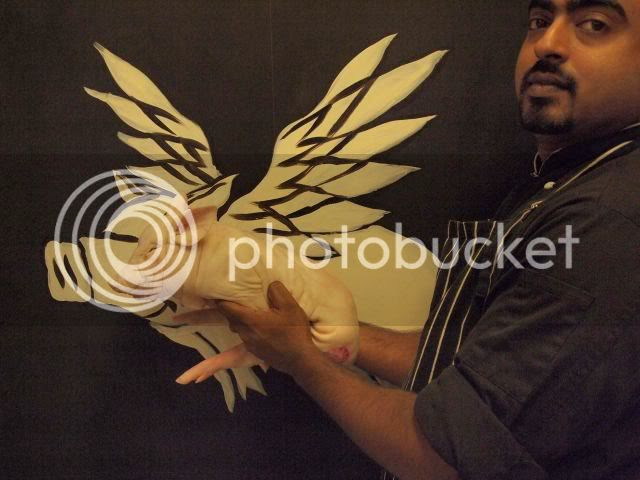 But, as Chef Tim comforted us, all good pigs go to heaven.... 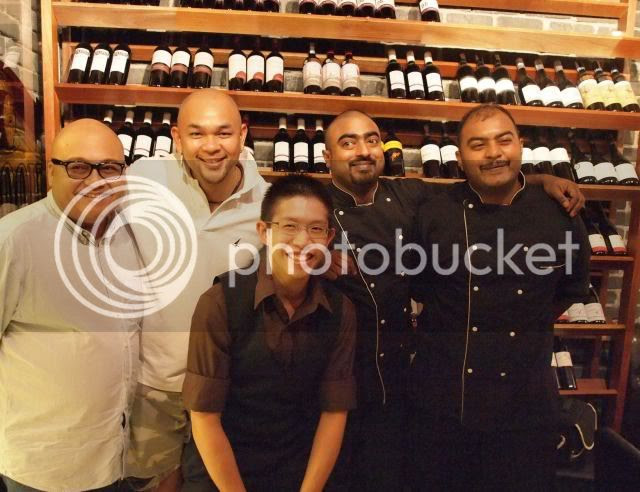 Thanks so much to the crew at Hoofed, "Ross", you know who you are, for the invite, Colin, Ernest, Chef Tim and Chong Yi Shawn.

I can't wait to head back here for a feast of pig and brew.

Aly's Wonderland
J2KFM - Ipoh Motormouth
Walauwei
Memoirs of A chocaholic
Posted by fatboybakes at 5:26 AM

Poor little piggy. We are so heartless, hor? - even such a sight couldn't stop us eating pork.
:)

I see the jetlag's got you packing in the punches! What a hilarious post. Got me up in stitches. Guffaw!

But WHY on earth do they have to bring out the lil piggy in the end. Potong steam lah.

You're back!!! Missed ya CPP!!! Awesome post! Love the similes everywhere - pork without fat is like chinese NY without ang pow - haha!

welcome back ahpa! missed u heaps.

man, no matter how many times i see that dead pig, it still totally grosses me out. I mean, i ain't no prissy git and i know where my food comes from, but that pale white skin is just in bad taste. gross.

Why do I have a feeling I'm gonna imagine every suckling pig as having the moniker "Queen Anne Boleyn" from now on? Eeks.

And that lil uncooked piglet looks exactly like the one from the movie 'Babe', doesn't it? Except more peaceful and er, "sleeping"... :P

Awww if they had shown me the piglet before a meal, I wouldn't have the heart to eat it! So, don't show it to me! :P I guess sometimes, Ignorance is indeed bliss!

Oh my.Nice siew yoke and suckling pig there. Sorry piggy. How much they charge on the suckling pig? Need to pre-order right?

Nope. No remorse at all.
Least his sibling died a graceful and purpose-ful death?
Nah ... we don't take pity on chickens, ducks, little goats or cows now, do we?

Really like the Fried Rice (Wot a surprise in an "ang moh joint"!)

And love ... Pork without fat is like chinese new year without ang pows.

j2kfm, i knew the rest could count on you to ease their pained conscience. heh heh...

simon, i guess its best to preorder. its priced at RM170 per full pig, accdg to j2kfm's blog. which is very reasonable if you ask me.

iamthewitch, awww, only nice girls seem to have this image stabbing at their conscience. (hence i'm surprised why ciki is affected). for me, alas, i cant say i am an animal lover, so animals on plates are fine. (running for cover)...kidding, kidding...(sort of)

pawm pawm, good fun hor, we should go again, get a pig and chug beer.

J, they should experiment next time and show the pig FIRST, and see how many ppl can still eat it. i reckon most will be okay.

I'm all for pork and all, but seeing it so adorably, with its eyes barely open, i just CANT bear to see it in front of me crispy brown!! :(:(:(

The bananarama looks intriguing and something I think I'm going to try to discover a recipe for!

Eeek... the way u described the cutting of the piglet is so torturous and that huge "beheading contraption" looked really deadly!

oh man, the piggy is sooo cute.. but all those roast pork looked delicious. that's an irony itself!