Kids these days have it good, because there is such a wide variety of foods available, everywhere. When I was growing up, the idea of eating in a Japanese restaurant was about as strange as the thought of coloured TV. I remember my FIRST ever japanese restaurant, I think it was Daikuku or something like that, in bangunan antarabangsa, for my dad's birthday. (He paid, obviously). We were spell bound, by the teppenyaki chef doing his culinary acrobatics.

So yeah, kids these days have it good. They even know what and how to order in a Japanese restaurant. But even luckier still, is the fact that prices are so competitive these days, and you can get (arguably, I know, esp if John Ishii is reading this), rather good chow for reasonable prices. I remember circa 1993, when I watched this Japanese arty ...almost porny, flick, called Tampopo, about this man's quest for the perfect ramen. Interspersed with some rather kinky (by the standard of the day) love scenes, (which till today I am unsure how it ties into the story as a whole), one was left drooling at the end of the movie, with an unquenchable desire for RAMEN. And hey, back in 1993, Kuala Lumpur wasn't exactly Little Tokyo. In fact, it was only about 10 years earlier that MacDonald's opened their first outlet in Yow Chuan Plaza. (where, I hear the young ones ask)

I digress. So till today, I have a penchant for Ramen, and always scour the menu for its availability. Recently, many Ramen places, Halal and Ha-Ramen have sprouted. It is no longer uncommon to get ramen with pieces of pork. One such place where this is available is Goku Raku Ramen in Mid Valley Megamall, on the 2nd floor, in front of the Jusco Entrance, next to Factory Outlet Store. You can't miss it even if you have half an eye.

With celebrity bloggers like BABEINTHECITY KL as our point of contact, we were given the "tour", of the very high tech kitchen, (no photos), and the ramen processing plant. (actually the public can view this as well). With all the canggih machinery, it looks almost as simple as chucking in the noodle dough. The dough is rolled, like reams of paper. 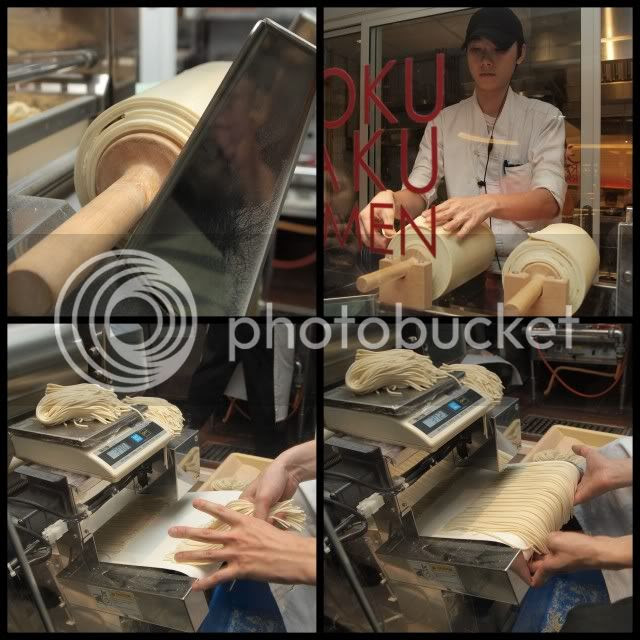 How here comes the part I did not know. Two rolls of rolled dough are rolled into one, kinda like puff pastry, for this makes a lighter springier noodle. It is then run through the noodle slicer, to produce the ramen. (oh, the dough is actually left to sit a couple of days before this second process). And here I thought ramen was as simple as Maggi Mee. Far from it.

The soups are boiled with tender loving care, taking up to 18 hours for some of the stock. The resident head chef, Shinichi Kanai, is a jovial, handsome fellow, and is very animated in his narrations. 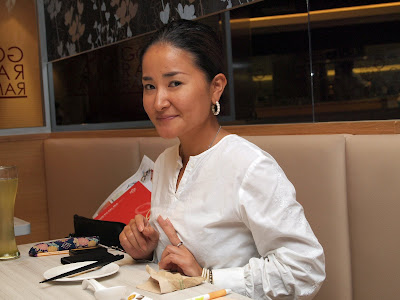 The lovely Tomoko Nakano, who is the Business Admin Exec for Sushi Kin Sdn Bhd. Yes, GRR is part of that chain. 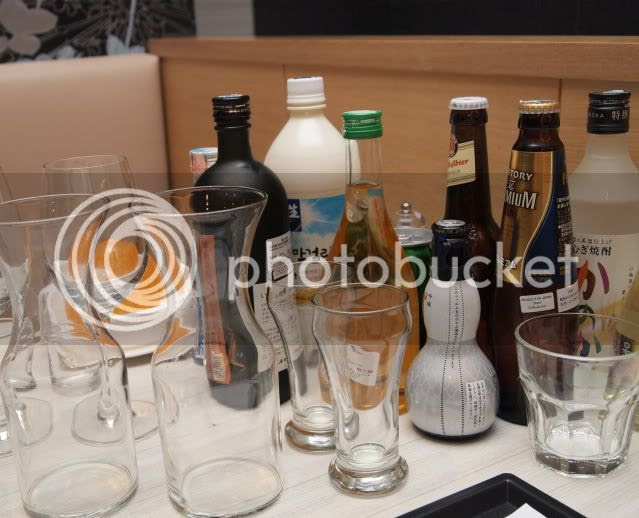 A comprehensive list of alcoholic beverages are also made available. 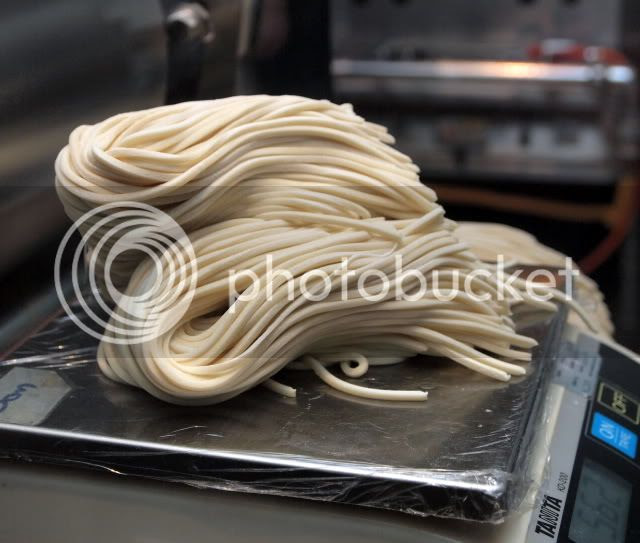 Ramen up close and personal. The three main ramen stocks, with various permutations. Prices start from around RM16.90 per bowl and there's a variety of side dishes you can add as well. 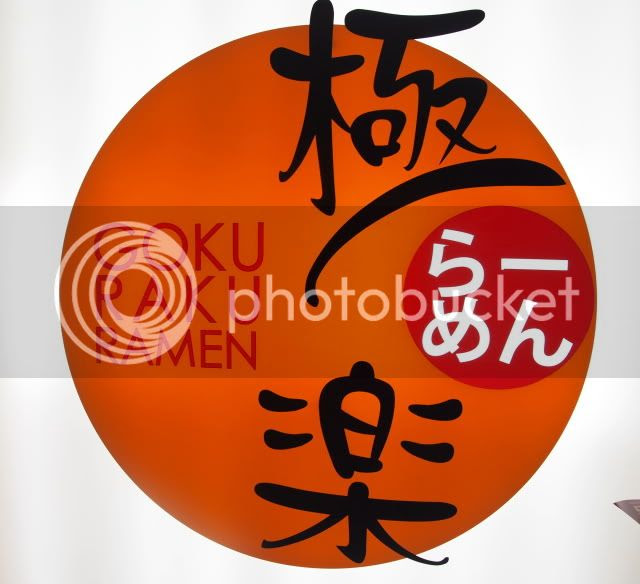 Their specialityPirikara Negi char siu, which was moist and tender, and oooh, so flavourful. Almost melt in the mouth. 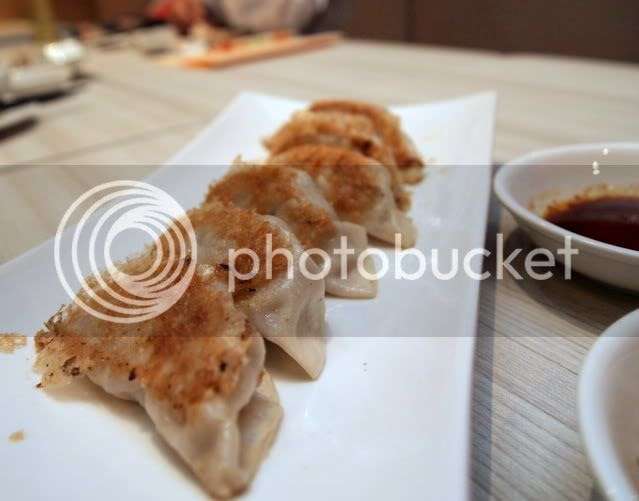 They have a special gyoza making machine too, which pan fries the thing while steaming, so you get a crispy bottom, but lovely moist gyozas. Because of that complicated process, you might end up waiting a while for your gyozas. So do check if there is a long queue for the machines, or your gyoza might arrive after dessert. They come with two types of sauces, wafu sauce or original gyoza sauce. 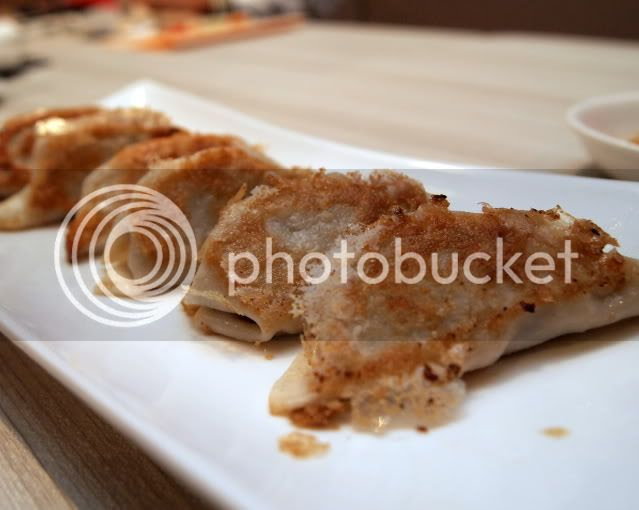 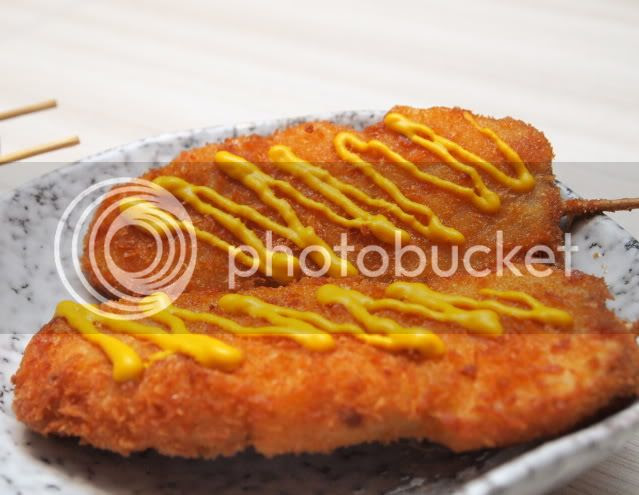 Buta Bara Kushi, deep fried pork cutlets, with a hint of fat, (in the cutlet), breaded. A sure hit with the children, and a perfect snack with beer. 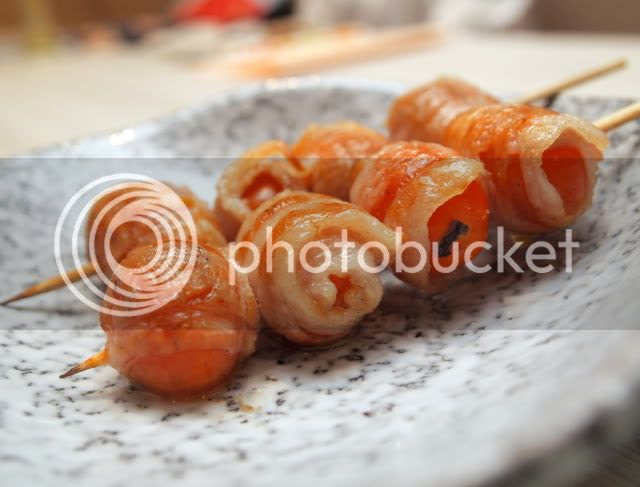 Oh, my favourite, tomato maki. Thinly sliced belly pork, not unlike bacon, wrapped around a cherry tomato. This dish screams out for an alcohol accompaniment, which our hosts and hostesses heard, so we had the Shozu set.....one with a tonic and lemon combination, 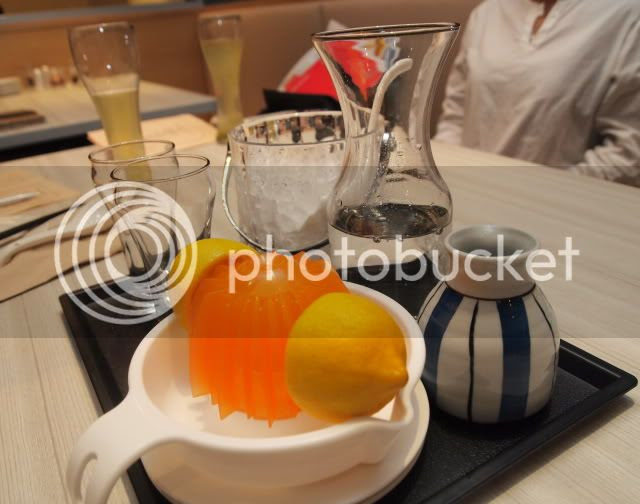 ..and another orange juice with 7 up. It really packs a punch, this shozu drink, and I suspect one too many can render you quite inebriated, without you even realising. 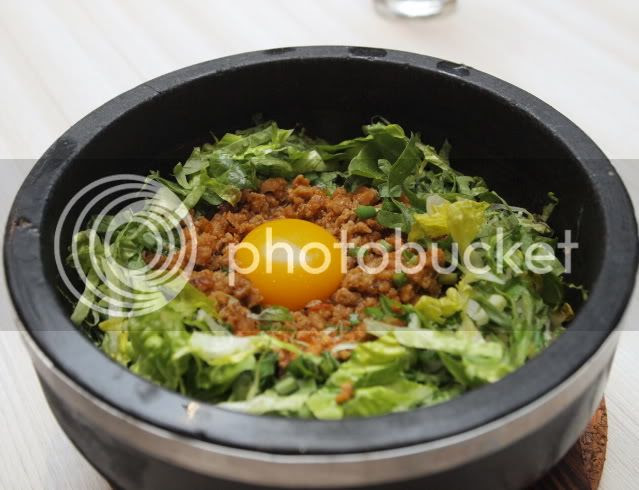 Ishiyaki (Stone Pot) garlic rice...not your normal garlic fried rice from the teppenyaki, but a wholesome pot with a raw-ish egg, which you toss together, (like lou shee fun), and the best part is the crispy bits of "kerak" at the bottom. Chef tells us the secret of his virility is in the STAMINA SAUCE.....(which they serve here) 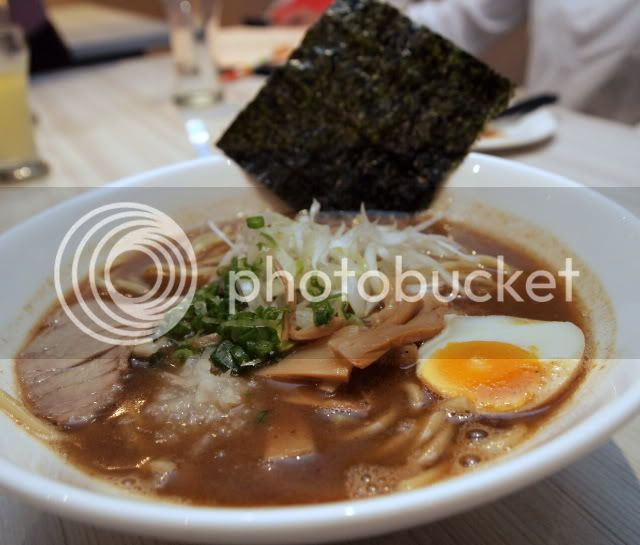 Gokuraku Ramen...actually there was a tonkutsu ramen as well, but my picture was horrible. The soups have a wonderful fragrance and aroma about them, some contain leek oil, burnt garlic, that impart a really gorgeous flavour. It does not taste like you average msg laden soup, for sure. One can almost feel the passion that goes into the soup. 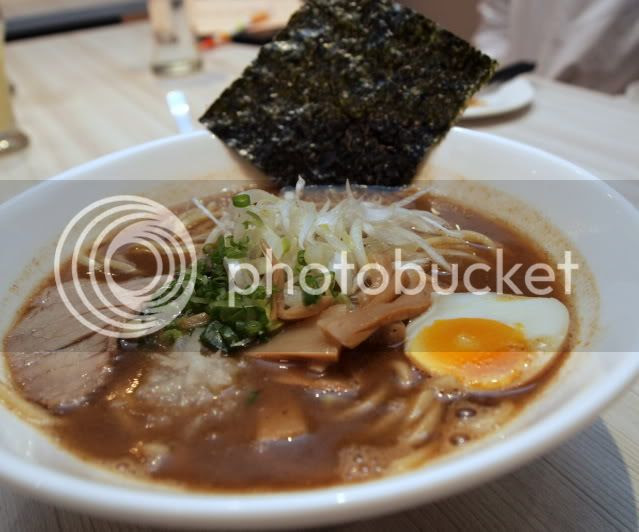 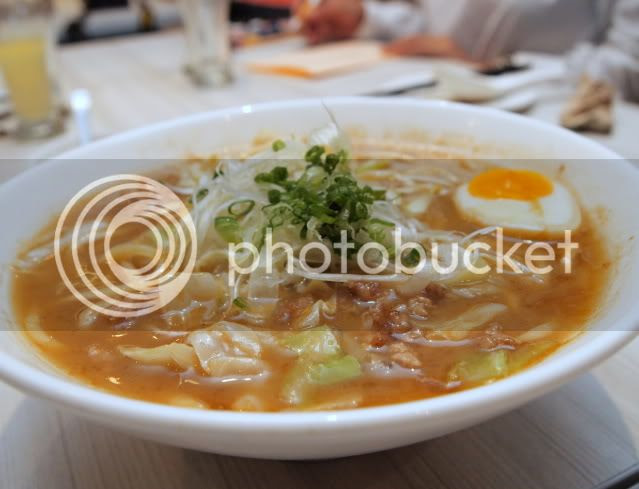 Gokuraku Miso Ramen, slightly lighter than the original Gokuraku Ramen soup, which really, you can stand a spoon in. Of the three we sampled, my favourite was actually the tonkutsu, without the picture. It was so good that I went back there a few days again with the brood, for a quick dinner before watching JOHNNY ENGLISH REBORN...that's another story altogether, but yeah, suffice to say, the food was consistent. 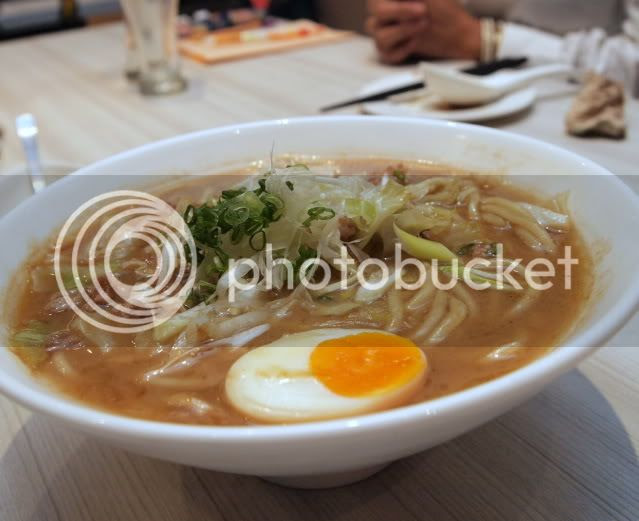 I lovee lovee loveee those eggs with the soft yolks, which are only RM1 as a side dish if you order the ramen. Yummy! 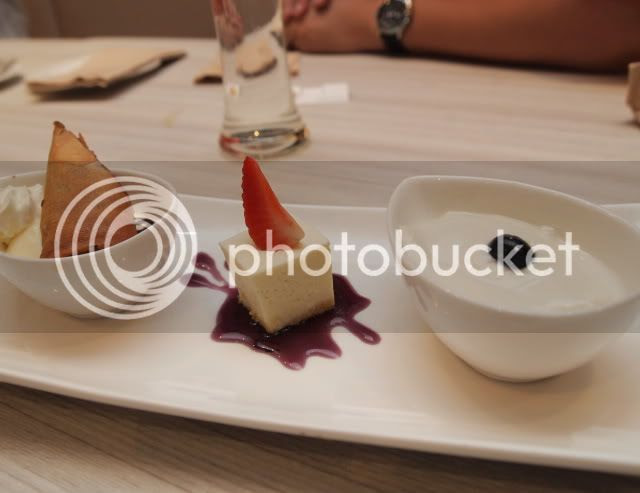 Finally, assorted dessert, annin tofu, rare cheese cake and banana fritter with vanilla ice cream. The annin tofu is like the chinese almond jelly, but very aromatic, not made from fake essence that imparts that cockroachy taste. You can taste the almond here. I am not sure what they mean by RARE cheese cake, but like the Japanese cotton cheesecakes, this one is also ethereally light, though I think its the equivalent of a chilled cheesecake. I wonder how they got it so light.

Well, I don't know what ramen in Japan tastes like, but I'd say, for my palate, this is pretty good stuff. Ah, just writing about it makes me want some again.

Remember, mid valley, 2nd floor, infront of Jusco entrance on the FOS side.
Posted by fatboybakes at 1:21 PM

Wahh new blog format - nice! :) I feel like im going on a roadtrip reading yr post, becoz of the background, LOL!
Pity I had to skip this ramen session... will check it out when i get ramen pangs the next time I'm in MV!

Those bowls of ramen look yummilicious (and this is coming from a person who's not a fan of ramen).

By the way, "rare cheesecake" in Japan just means an unbaked cheesecake (the cheese is not cooked, hence rare - like meat, perhaps?). Quite popular with the Japanese since it's not as rich and heavy like the baked counterparts.

Ironically, the first Jap buffet I had was at Kompleks Antarabangsa as well; named Shin Nichi or something. A sheer irony since the name of your ramen chef's almost similar ...

Yeah how kids these days have it easy.

PG,yup, its a lovely pork broth. u will like.

expatgourmand, thanks for dropping by. thanks for the explanation on the cheesecake, yeah, it make sense hor...rare as in uncooked, or maybe like rarified air. the japs like their things light huh.

j2kfm, got meh? never heard of it wor.

Digging the new interface. Best bowl of Ramen I ever had was within Tokyo Disneyland. Cold weather+hearty broth+succulent noodles for the win!

Ooh blog got a new skin! Nice! I don't understand why the reception to Goku Raku's been lukewarm so far... it's the hawtest bowl of ramen I've had in KL so far!

Hmm. Maybe one just has to choose the right bowl of ramen... I had the broth that was a mix of chicken, pork and fish stocks (unless I misremember) when I visited Goku Raku and it was, well, underwhelming.

Perhaps a revisit is necessary (one that focuses on the tonkutsu) since FBB's taste is impeccable, after all. In FBB We Trust! ;P

the chef looks like quite a character! I want to try this ramen.. bring me, ahpa!

I like the dessert best, everything look very well decorated as well as the restaurant itself!

btw the dough is left to rest for about 2 hours not days!

and yes it was so good that we also went back for the slurpy ramen. the kid drank up most of the broth!

Kenny, must choose the porky base broth!!!

Everything looks pretty awesome. I am quite impressed.

I just would like to give a huge thumbs up for the great info you have here on this post. I will be coming back to your blog for more soon.

I just would like to give a huge thumbs up for the great info you have here on this post. I will be coming back to your blog for more soon.

I am very thankful to you for outstanding post. Perfectly composed information really experienced knowledge. I really enjoying and I’m going to bookmark so i can read new articles you post in future.