Back in the day when I had the luxury of watching lots of TV, and when it wasn't raining daily day in day out, and our dear satellite service wasn't constantly interrupted because of the rain, I used to religiously follow several cooking shows, and one of my favourites was Sugar, by Anna Olson.  She's somewhat of a MILTFW...(Mother I'd like to be friends with)...And a few years ago, I was excited as a zitty teenager on a first date (though I was never a zitty teenager, which alas, I can't say the same for my son), when I heard that Ms Olson was going to be in town.  In that first close encounter, I actually got to watch her demos TWICE.  Lucky me.

So when the PR Company, Alice George sent out invites for yet anna-ther chance to meet with Anna, I was delighted, although debilitated by a violent stomach flu courtesy of my Beijing trip, I braved the rains, and the hoi polloi to board the monorail to Time Square, to head to the Berjaya University College of Hospitality, where the Asian Food Channel was presenting - FRESH FLAVOURS WITH ANNA OLSON. 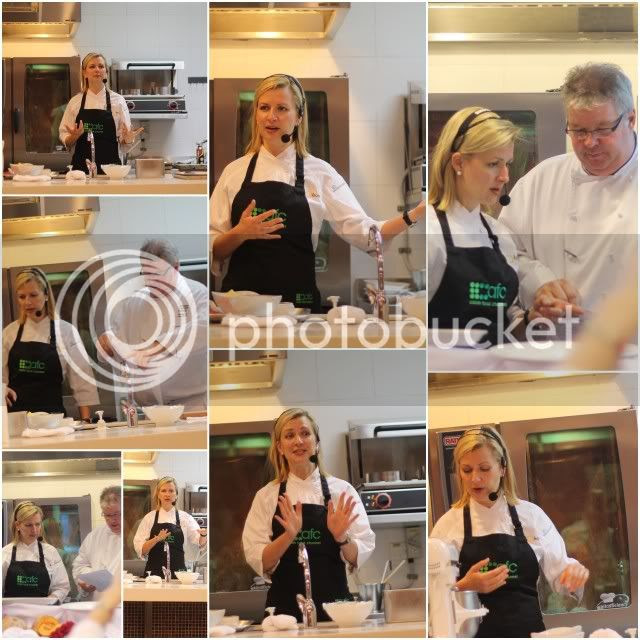 The Various Faces of Anna Olson
Anna gives a warm wave to the audience, as her husband, Michael Olson gives her a hand in prepping the kitchen.

The very popular emcee that requires no introduction, it's just that I am more accustomed to seeing him decked in black, in Hennessy XO Appreciation Grows functions. 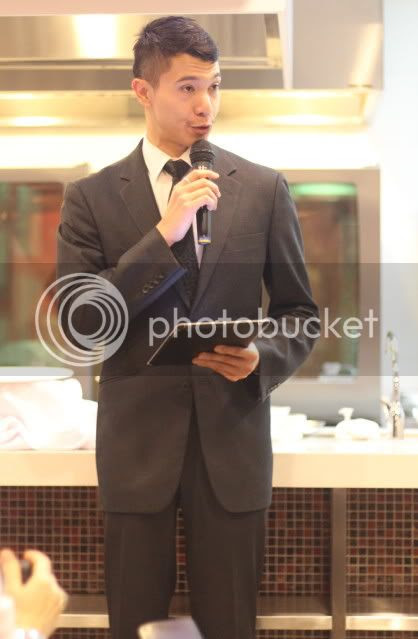 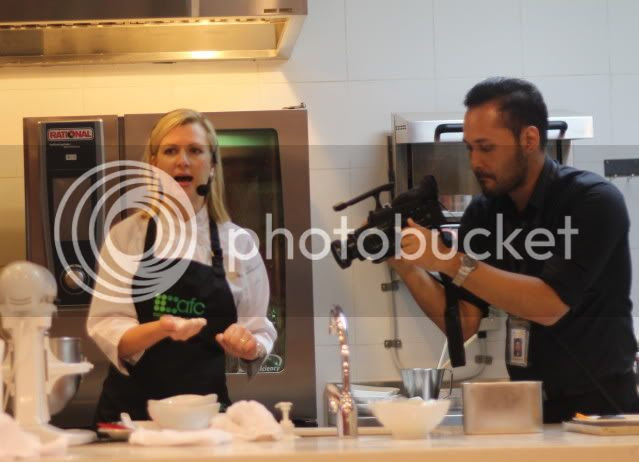 Today, she is demonstrating two recipes, a savoury and an unsavoury one.  Afterall, she was trained as a savoury Chef, before she turned unsavoury.  So she says.  She still looks quite savoury to me.  The savoury recipe for the day was the TOURTIERE, (tor-tia), which is basically a meat pie with a glamorous name. 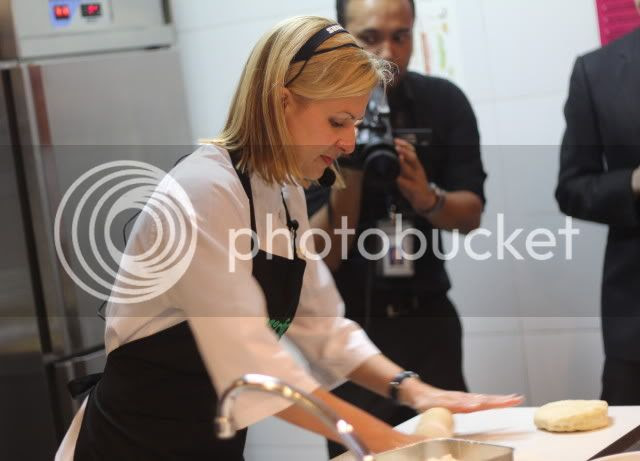 She demonstrates with great ease how to make, and roll a pastry. With the benefit of the magic of television, no sooner had she mixed the dough, miraculously a ready refrigerated one appears. 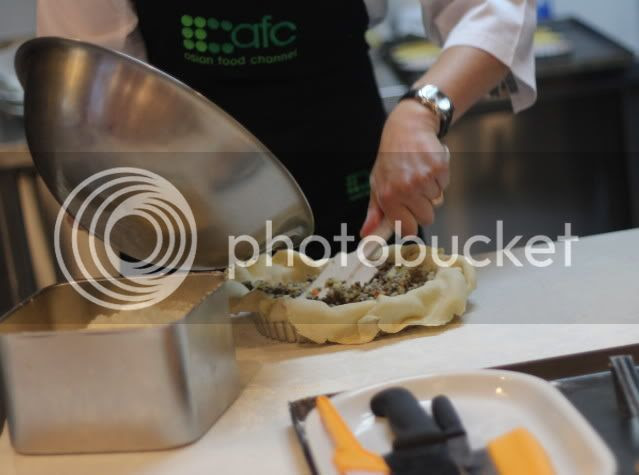 While the apprentice is mixing and stirring the filling, which comprise potatoes, beef & veal, the indispensable trinity called the mirepoix (mir puaaa) which consists of carrots, garlic and onion, pepper, celery seeds, the ALL important ALL SPICE, cider, etc.. 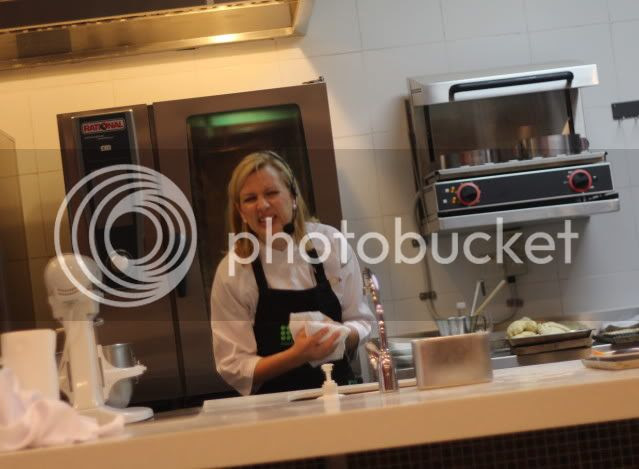 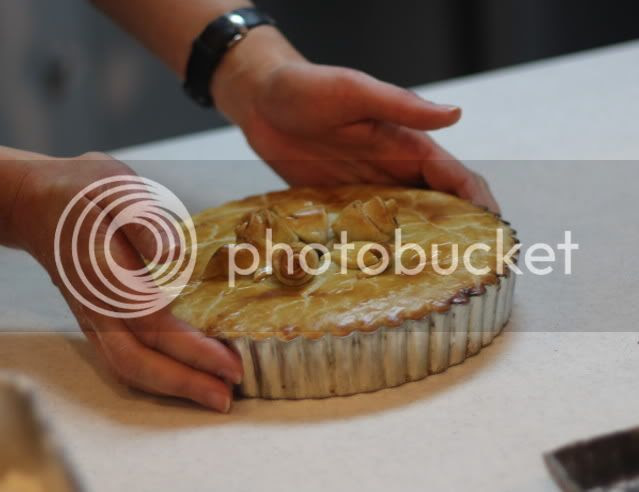 The tourtiere is ready to be served.  And what a pretty one she is. 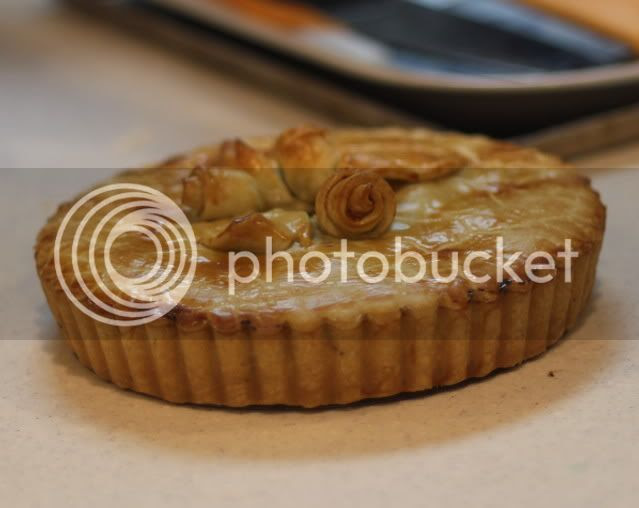 And such, is the Life of Pie, at least this one, which is bound for fame and glory as the paparazzi shoots it from every conceivable angle. 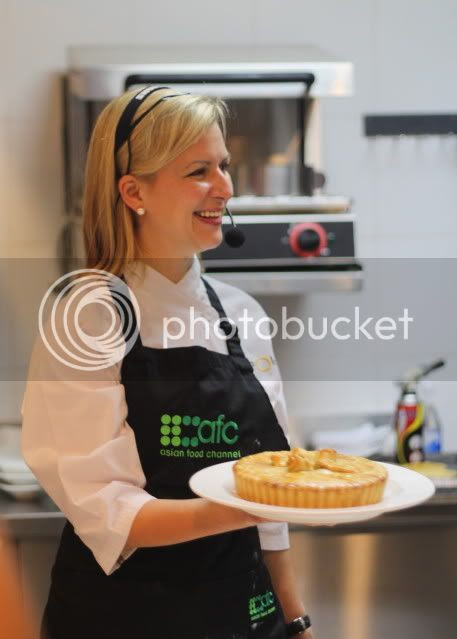 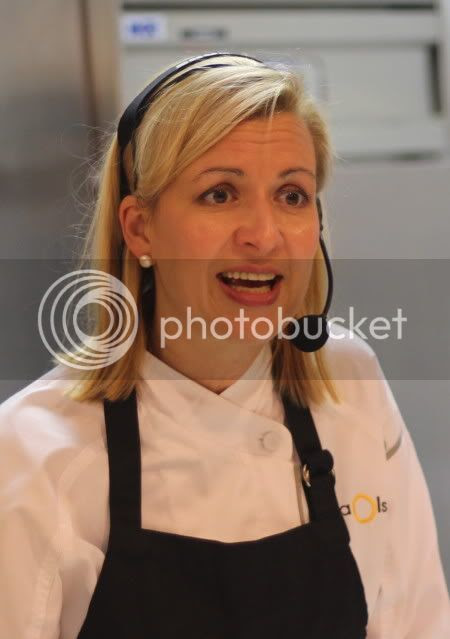 She really is very photogenic, and has a really dazzling infectious smile, that makes her so down to earth despite her celebrity status. 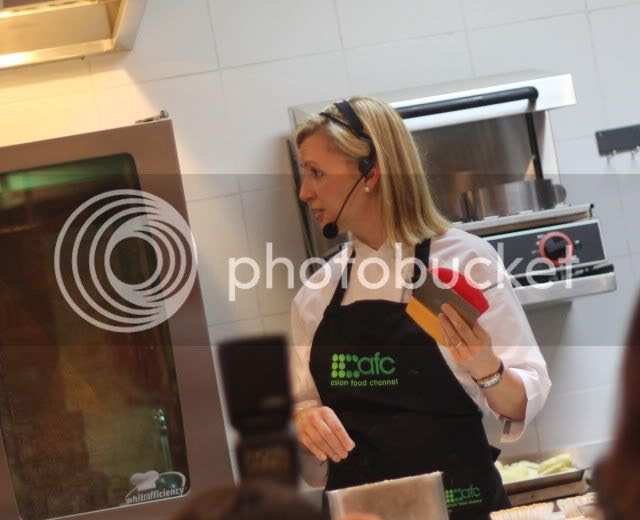 These are the two must have kitchen utensils, according to her.  One is a metal pastry scraper, for scraping off bits from the work surface, the other a silicone/plastic almost semi circular type scraper, for scraping a mixing bowl, and for reaching into the difficult parts of the bowl where the sun don't shine. 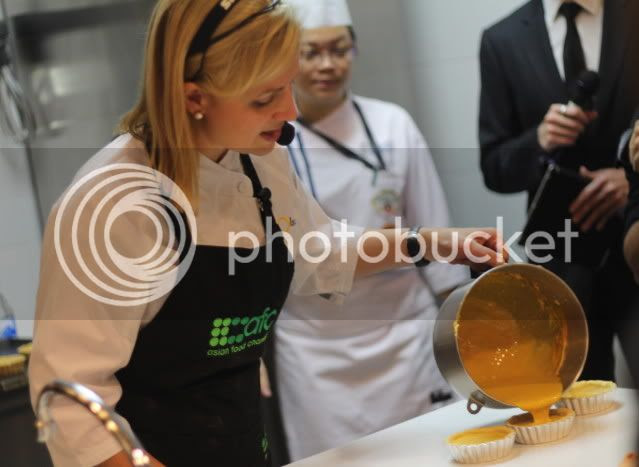 Her next recipe is Pumpkin Creme Brulee, which is actually cross between a creme brulee and a traditional pumpkin pie.  The secret to this recipe is the use of cream cheese,  instead of cream or milk which is usually used for brulees and pumpkin pies.  It requires 6 yolks, so if you are making pavlovas, and bear a heavy yolk, you know what to do with it. 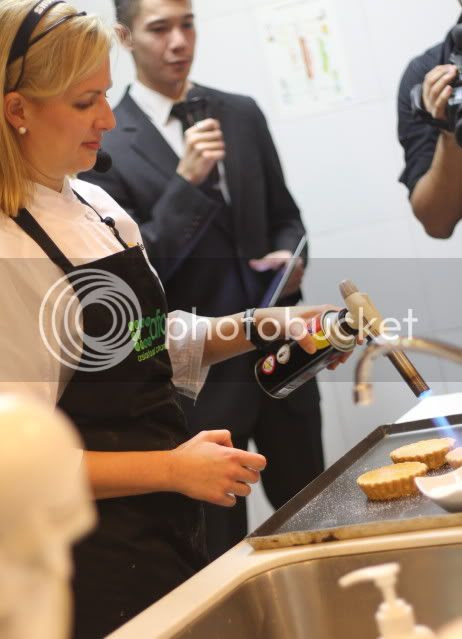 And finally, the creme brulee finish, the caramelizing of the sugar layer on top of the finished tart. 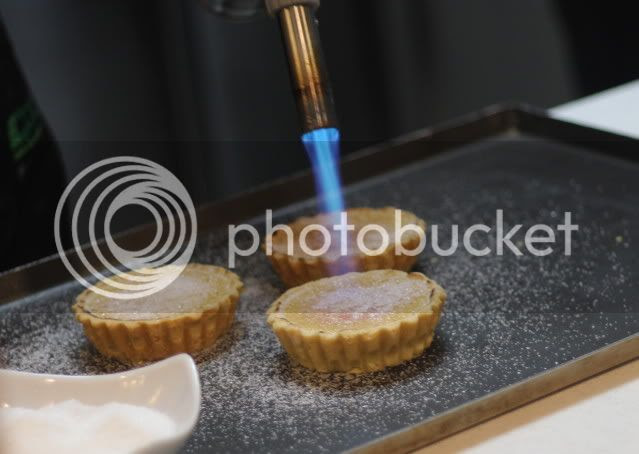 There's something unique about wielding a blow torch, it gives one a sense of extreme satisfaction, and power.  Burn, SUGAR, burn.  Muahahahaha. 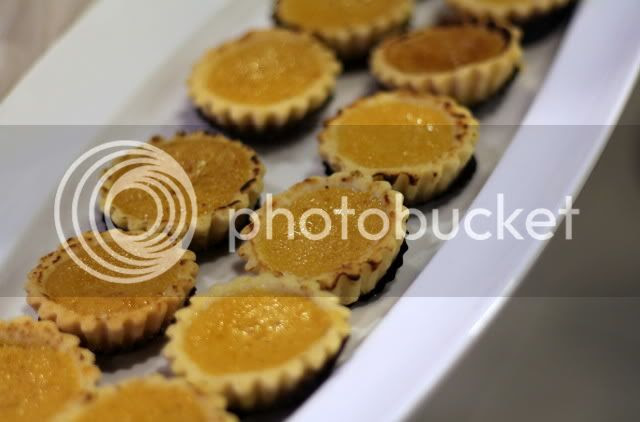 We dont really get to try the product of the master herself, but nevertheless, it tasted good, these miniature tarts.  The tourtieres, hmmm....I would have loved to have tasted the original Anna Olson one. 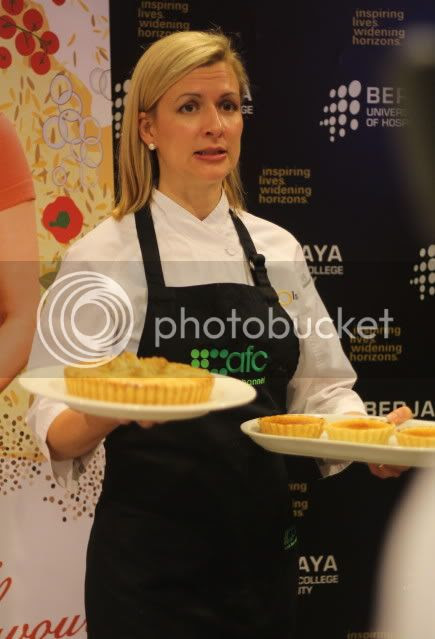 Now isn't she such a sweetie, treating the savoury and unsavoury with equal love. 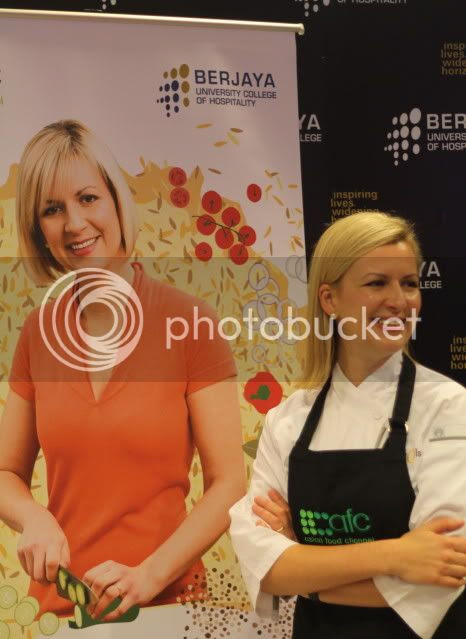 Anna's Biography, Abridged
Anna Olson is a professionally trained pastry chef with over fifteen years of
experience in the culinary field. She shares her talents with the world through award
winning cookbooks, opening culinary businesses and starring in television shows
such as Bake with Anna Olson, Sugar and Fresh with Anna Olson, all of which air on
the Asian Food Channel.

Bake with Anna Olson and Sugar, both feature Anna’s desserts making skills and her
ability to create deliciously sinful goodies. Fresh with Anna Olson was filmed in her
beautiful home in the Niagara region, which is close to some of the most fertile and
productive farming in Canada. This allowed her to showcase incredibly fresh,
seasonal ingredients in her tasty and approachable recipes.

Before realising cooking and baking was her true calling, Anna earned a degree in
political studies and sociology from Queen’s University of Kingston, Ontario. She
spent a few years in banking before deciding it was not her life long dream. Anna
promptly enrolled herself into the culinary program at Johnson & Wales University in
Denver. After graduating, Anna traveled across the United States and finally settled
herself in Canada’s Niagara region.

She began her career as a pastry chef at a premier winery restaurant located in the
midst of prime Niagara farm and wine country named, ‘Inn on the Twenty’. It was
here where she met her husband, Michael Olson.

Anna has also published several successful cookbooks. Currently, she has six
cookbook publications under her belt, with her most recent release titled, Fresh with
Anna Olson. Using food as her creative medium, Anna likes to work backwards,
starting with ingredients that sound delicious to create components within the recipe
body to get a delicious end result.

Anna currently resides in the city of Welland, Ontario. She spends any spare time
she has with family and friends; she loves to shop with her mother Donna and her
step-daughter Mika keeps her young at heart.

i was the looking for the same and related info, what you describe on your article. And found you through google search. Its helps me a lots and i understood that you are one of skill article writer/ blogger. I have book marked your blog and hope to visit again to learn more. Thanks for your valuable efforts and time.