A few Sundays back, the entire lobby of Hilton Kuala Lumpur and the surrounding areas looked like we were still the jewel in Crown of the British Empire.  Oh, hangon, wait, we were NEVER the "Jewel" per se, ...I guess.  But the Union Jack adorned the area, with the quintessential red phone booth, and the mini cooper.. All for one day  of SUPERBRUNCH, featuring arguably the best of British fare. 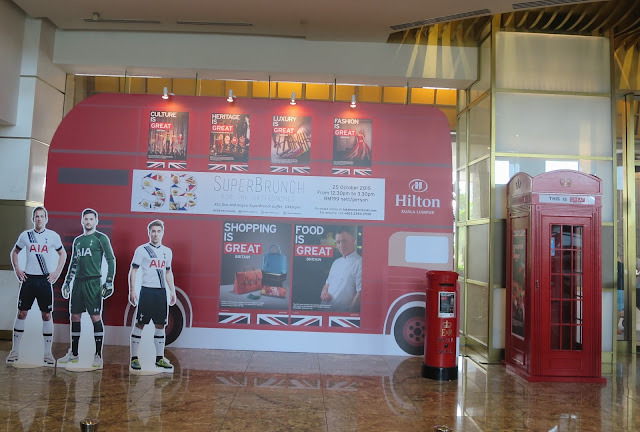 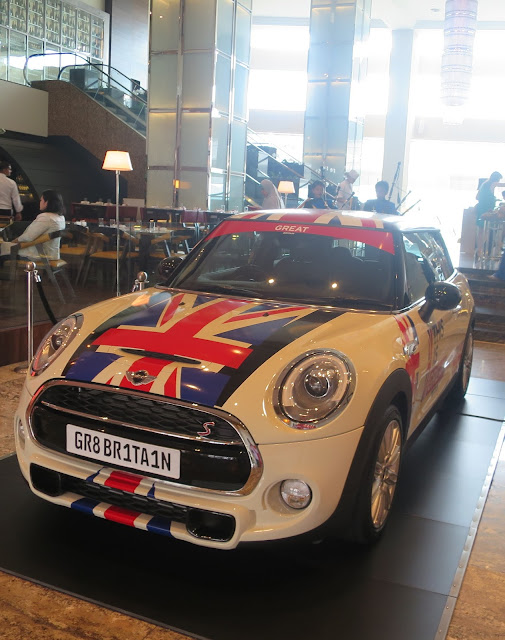 Whilst actually, real traditional British fare, like Sunday roasts and yorkshire pudding, toad in hole, etc aren't particularly stellar in the culinary spectrum, there's always a homey feel about it, more so than ladida French food, which one is less inclined to try to replicate in one's own kitchen, as opposed to say, a roast. 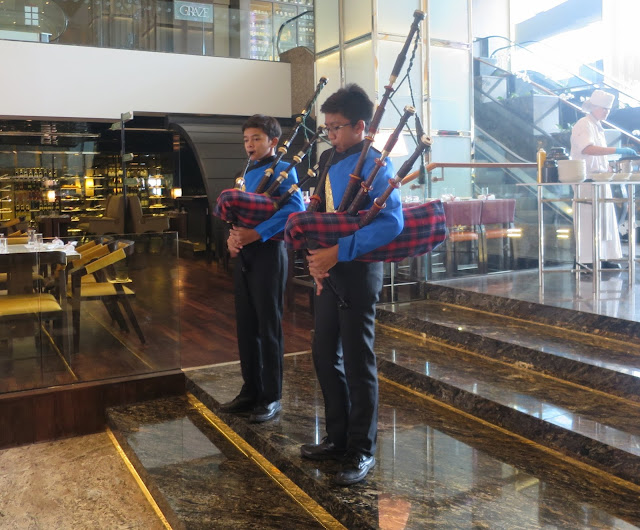 The wail of bagpipes resounded cacophonously through the hallowed halls of Hilton, (would have been better if it was Hallowed Halls of Hogwarts), played by kids, which begs the question, WHO sends their kids for bagpipe lessons?  Is it even on the ABRSM music repertoire?  I can imagine some chinky mother proudly declaring, "ooh, my daughter just passed her Grade 8 in bagpipes". 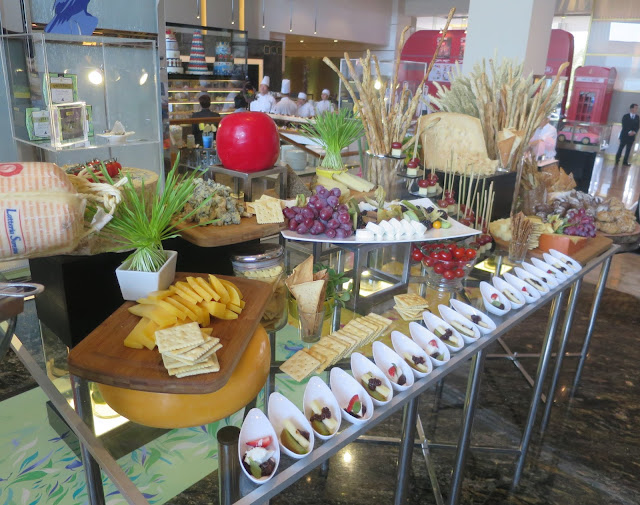 The section in the lobby area was the desserts and breads area, the highlight of which to me were the british crumpets.  A cross between a scone and an english muffin, it was delicious served with cream and jam. 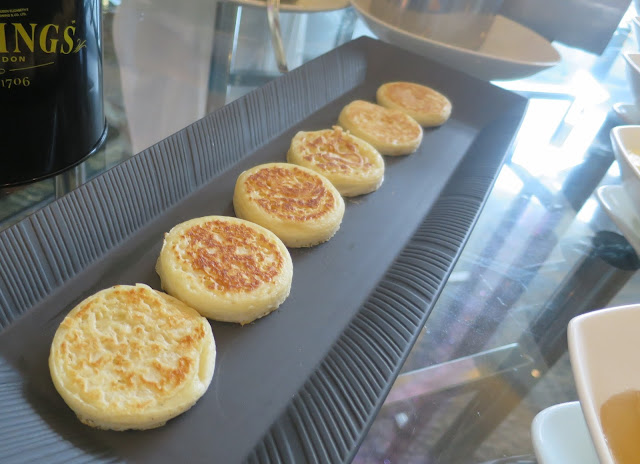 Come to daddy my little crumpet. 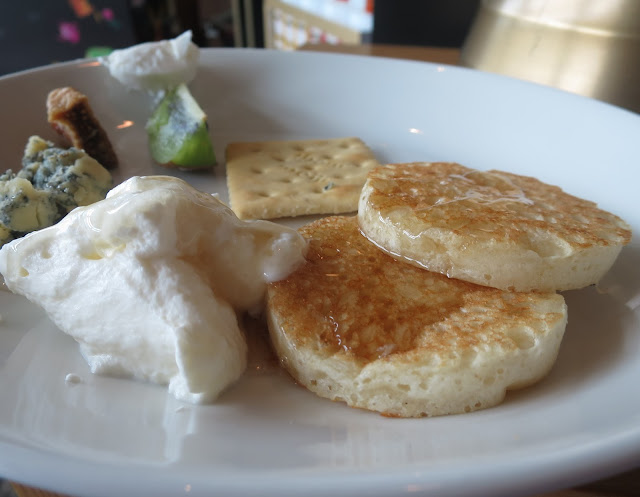 The goats cheese and the blue stilton were really good as well... 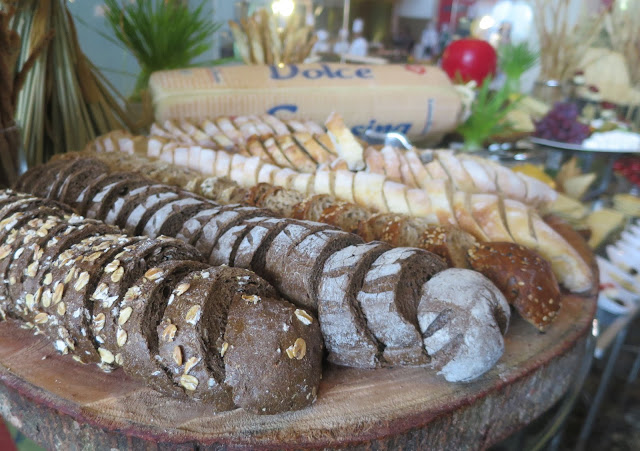 Gorgeous selection of breads, but really, who comes to a buffet to get filled on bread... that's as bad as getting full on fried rice. 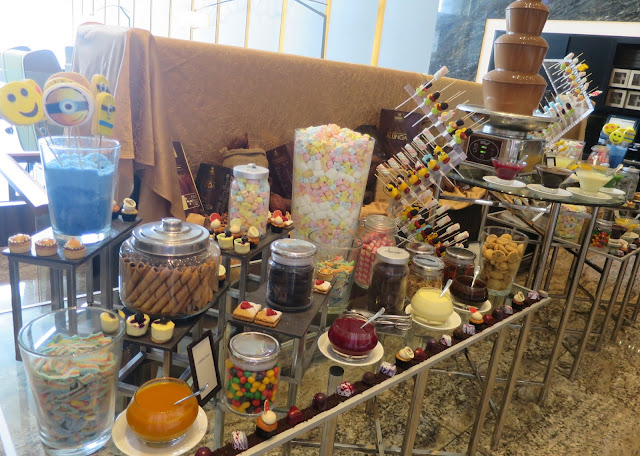 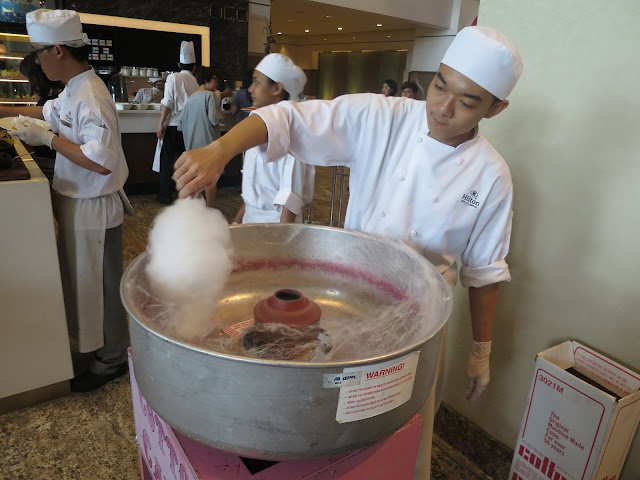 I was surprised the candy floss guy had customers who were adults...as is evidenced by the pic below... 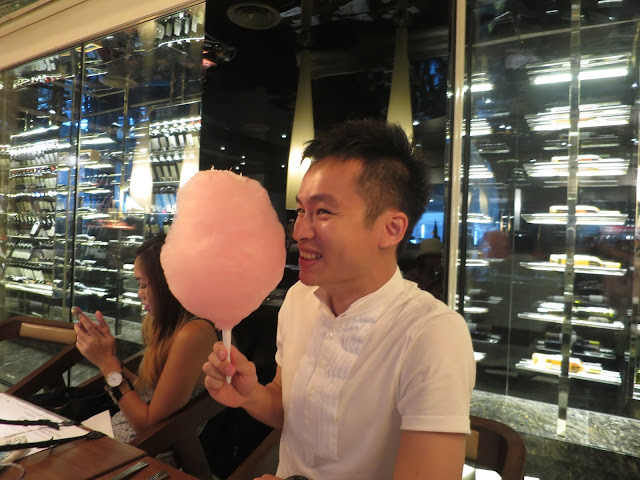 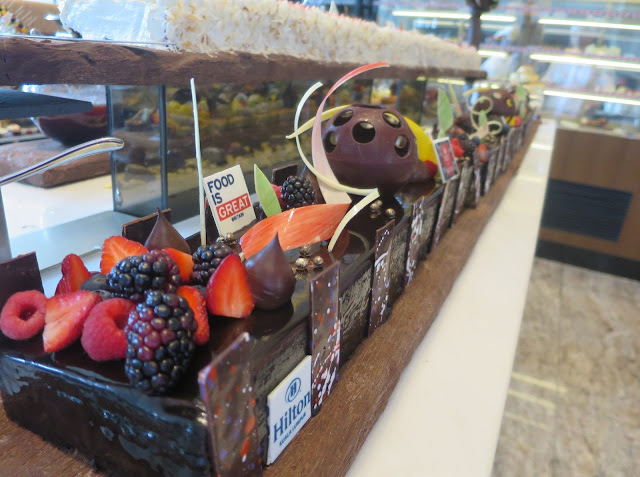 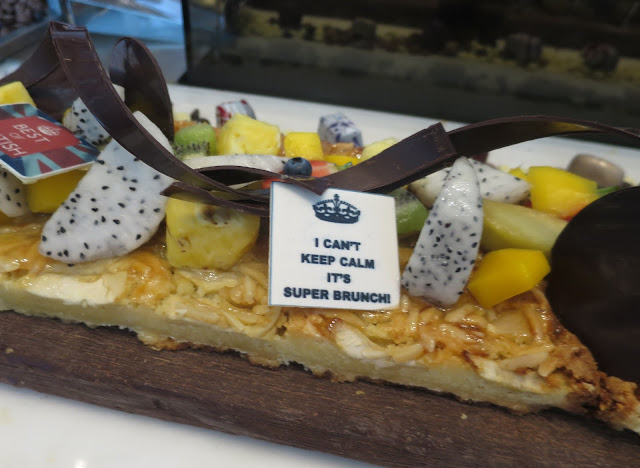 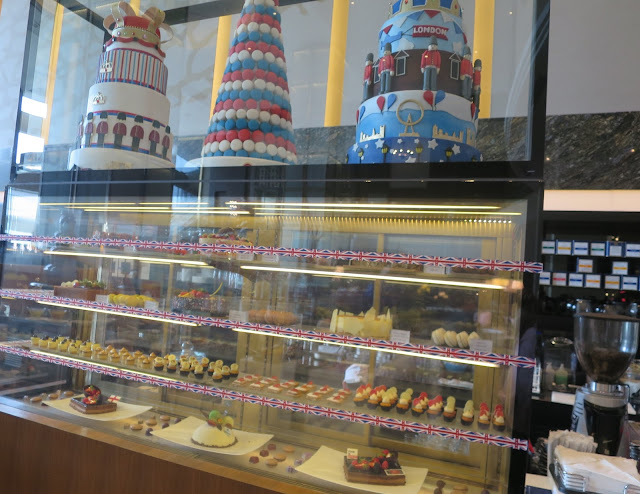 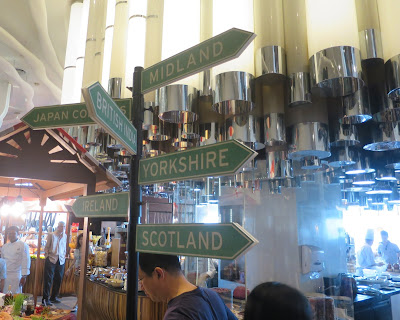 The main area in Vascos had the usual buffet spread in addition to some specifically British items, like a gianormous Wagyu leg roast, accompanied with Yorkshire puddings on steroids.  Huge mothers with an assorted accompaniment of roasted vegetables like potatoes, carrots, etc. 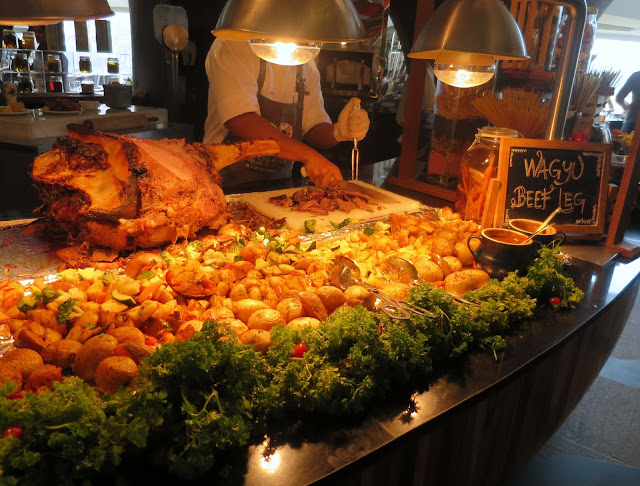 Wagyu no less, I might add.  Unfortunately, I must gotten the inner bits of the leg, which was way too well done for my liking, and was drier than British humour.   Dousing it with brown gravy helped, but what a travesty for Wagyu. 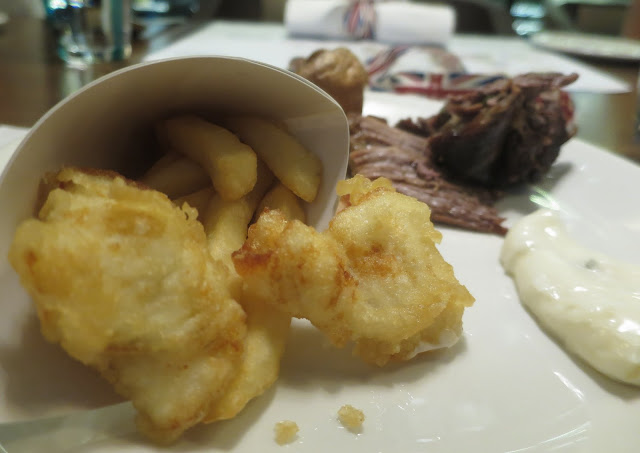 Of course, who'd have thought that Fish and Chips are actually a British invention.  Afterall, aren't French fries ..err...French? 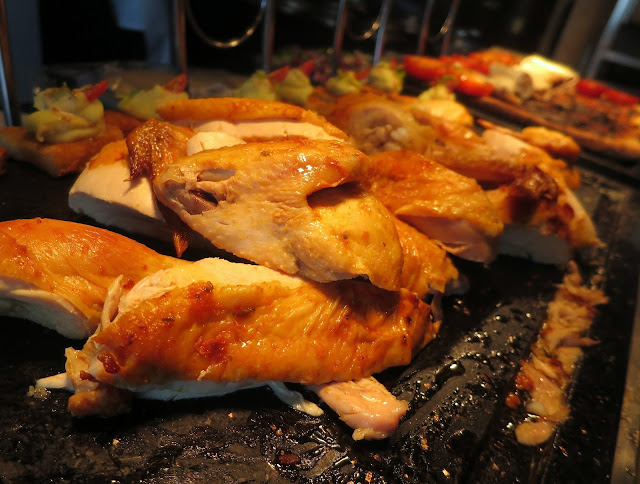 Assoorted roast fowl and bangers...  I actually liked the simple roast chicken, thigh meat of course.  Breast meat from a roasted chook to me is like eating blotting paper. 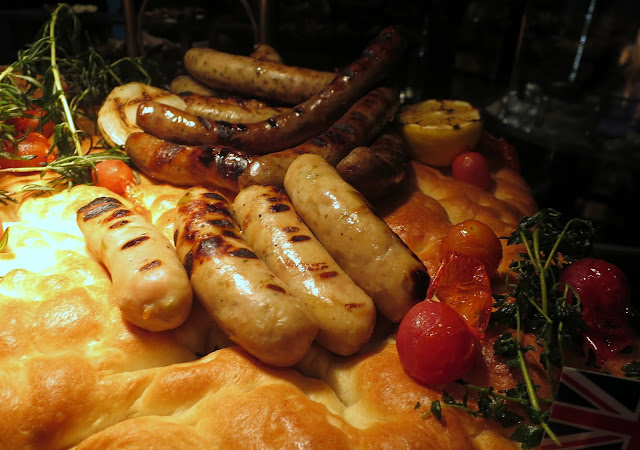 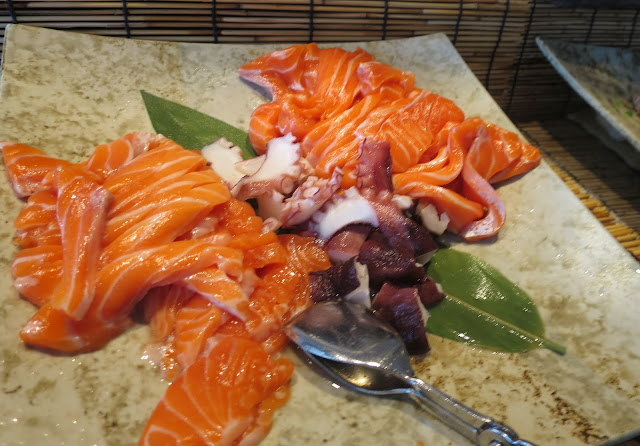 To break the monotony of meat, (land based meat), the usual Asian section with sashimi was a welcome break after my meatings.

Unfortunately the Superbrunch isn't a regular feature, although the usual buffet fare at Vasco's is not very different anyway, and is bound to be just as satisfying.  Oh, a highly recommended item from the buffet is the Peking Duck, very yummy, crispy skin melt in the mouth ...

I missed the Peking Duck. Will have to check it out next visit.