The good thing about being acquainted with Culinary Guru, Masak-Masak aka Boolicious, is it's like having a doctor on call. Now, I suspect this is why her contact is not for public consumption, or she'd be swamped with culinary emergency calls.

My recent baking "disaster" was last week. Actually, after the Christmas New Year period, orders have dropped to a grinding halt, giving me a much welcome break from the heatwave emanating from the oven. I swear I must have gotten a tan from opening the oven so regularly in December. Anyway, the good thing about having a break is, you're finally free to experiment a bit.

I had to bring a cake to a friend's house, a Tiramisu Cake, to be exact. But I thought it a waste just to bake ONE coffee chiffon cake, so I doubled the quantities. Everything was going really well until my dad started chatting with me. I had painfully separated 8 eggs, whites in a bowl, the yolks in another. While chatting, I measured the oil, and without thinking, started pouring some into the WHITE!!!!! Of course, Jamie Oliver, Joanne Fam (my instructress from Wilton) and whoever else, have always parroted the fact that EGG WHITE AND FAT ARE ENEMIES. or more precisely, Meringue and Fat are enemies. Gee, I must be meringue's worst enemy then.

Anyway, I made a mental shriek, and proceeded to scoop out whatever oil I could. Crossing my fingers, and toes, and sending an sms to Boolicious, I proceeded to whip the egg white ANYWAY. Now, I'm honestly beginning to wonder if this enmity between albumen and fats are as mythical as the enmity between Joan Collins and Linda Evans. (Alexis Carrington and Crystal Carrington). To my surprise, the meringue did whip up nicely, but as a precaution, I beat the rest of the cake mixture a bit more to incorporate some extra air into it. Now, surprise surprise, the cake turned out fine. 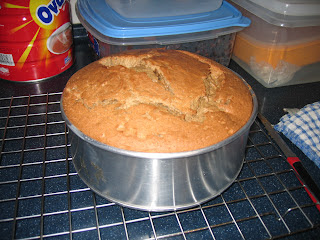 As can be seen from the picture above, everything was above board, and rose nicely. Chiffons have a tendency to collapse after taking out of oven, hence my tip to friend was to invert the tin, as most cookbook suggest.

Now, one cake went toward making the Tiramisu. I've always felt that I needed more coffee flavoured recipes, so proceeded to experiment on my own. Using a thick coffee mixture, with a little water added to dissolve the granules, (I think about 1-2 tablespoons coffee powder), mixed into 2½ cups of whipped cream, with about 3 tablespoons sugar, (or less), I used this coffee cream to intersperse the layers of chiffon. Oh, I also added a cup of roughly chopped walnuts into the cream mixture. To top it off, a layer of another cup of walnuts (which makes it quite an expensive cake, by virtue of the walnuts alone!), and chocolate rice on the sides. 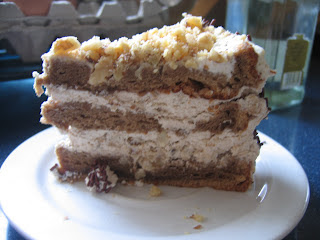 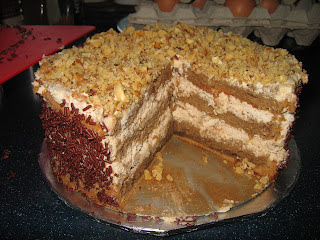 Tah dah. I have to say I was VERY pleased with the results. Best when really chilled, it really tasted rather delectable, IF I MAY SAY SO MYSELF!!!! For a more economical version of the cake, I guess the best way is to reduce the walnuts. Two cups of walnuts, afterall, costs nearly RM10 IF you buy your walnuts from Carrefour or even more, if from Cold Storage. But who buys from there right!!!

You may all now slowly thank me.
Posted by fatboybakes at 3:37 PM

Now you can write to those cookbook experts and say it's not true - eggwhites and fat can be mixed together. My mother who is the chiffon cake expert will say no such thing.

For more coffee flavour, use the bake shop's coffee emulco as that adds the aroma. I use that for my coffee jellies and it smells great.

as in your mother will say what? white and fat can mix or definitely cannot mix?

actually, it's probably true that they cant mix in certain functions lah, but in this case, it's all gonna be folded together anyway, so how is that not mixing right?

is emulco a natural substance? i've seen it, chocolate too right... okay to use huh?

I was one of those who buys walnuts from Cold Storage before I found your blog.... I now buy from shops selling cake supplies. Much more economical. Many thanks to you!

there, that slow enough? ;)

Sure egg whites and fats can mix !

As are Joan the big and Linda the bigger why not ?

Anyway I am learning some cakes, altho I hardly eat them at all !

hahah, lei seong sei ah!!! asking such question. do fat people really bake (did you mean better or batter) cakes?
i DONT think there's a correlation between waist size and ability to bake ler....
like the owner of celicakes is slim and gorgeous, and bakes wonderful cakes.