As I was kinda handicapped over the weekend, as finger was in bandage, wife had to come to the rescue for High Tea we were supposed to go for, and bring scones. As scones require kneading, I obviously could not partake in the festivities, and even had to turn down a profiterole order, as I didn't want to risk botching up the job. I also discovered that those disposable gloves that butchers and deli fellas wear, are actually quite convenient, and quite cheap too. 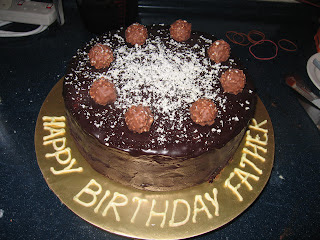 This is a 2.5kg oreo cake, my first attempt at a 10" diameter oreo cake. It's really strange, coz I also made another normal sized one, and the reviews I got, respectively were:

Actually, for the oreo cake, there is no added sugar at all. The sweetness comes from the sponge mix, the oreos, and the chocolate. So I can't even reduce the sweetness, short of using bitter chocolate, which in this case, would mean price is inversely proportional to sweetness. ie, the less sweet, the more expensive. (since the only bitter chocolates are either hershey, lindt or valrhona).

These are the stuff that we brought to the tea party, hosted by KTT. Mini chicken pies, which I made, but wife had to seal the pastry together. Chicken pies are easy to make, and always quite popular. Just blitz a bit, one roughly shredded roast chicken, (I usually buy from TMC), add frozen veggies, (pea, carrot and corn combo), shred some cheddar cheese in, a cup of cream, a packet of powdered mushroom soup, (dissolved in a bit of hot water)...supposedly no MSG, the campbells one....toss all together, and put into store bought puff pastry....you know, I can imagine doing a tv show ala nigella lawson, giving this running commentary.....except, unlike nigella, no one will watch. 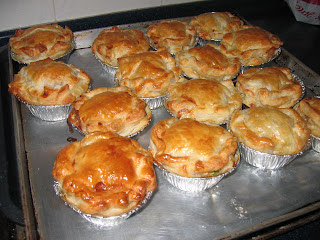 Scones made by the bini. I measured out all the ingredients, all she had to do was knead. They were rather good, if I may say so myself. Pat on my head for the wonderful measuring job. 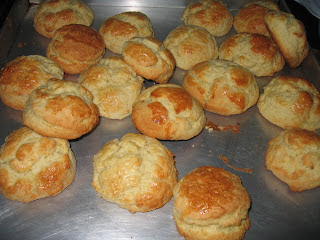 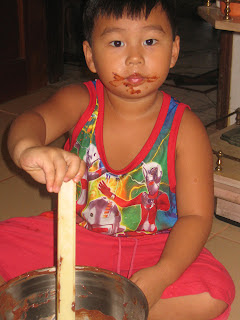 He finds solace with his mixing bowl....
Posted by fatboybakes at 12:22 PM

Hey, credit shd b given to knead-er too, rite? Your 'lil boy is most 'cubit'-able!

haha, yes yes, credit to the kneader too.
and yes, he used to be even MORE cubit-able...

Oohhh, a future patisserie in the making - your son!!!

hmm, not sure about this son. my older son is more inclined i think. he refers to nigella and jamie by first name, and asked me why nigella (lawson) hadnt appeared on tv for a long time, and if she was on holiday. i record cooking programs for them to watch, and all the three older ones are glued to the tv.