Don't Laugh, But This Is Why I Don't Do Decorative Cakes 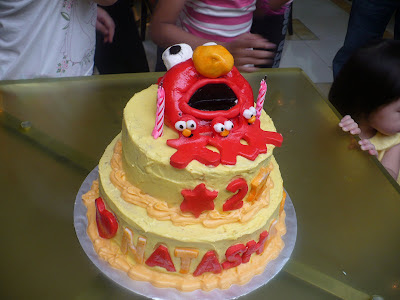 It was a slight tinge of horror that ran through my mind when Lionheart asked if I could do an Elmo cake for his daughter's birthday. And for 60 people too. I have till now avoided like the plague any orders for kids birthday cakes, but since I attended the cupcake class at Cooking House recently, and saw that fondant/sugarpaste wasn't that hard to make, especially with a kenwood, I thought I'd give it a try. What I find particularly tough about sugarpaste is coloring it. Kneading the dyes into the sugarpaste is a lot harder than it looks, especially to get an even coloring. However, since Elmo and appendages was going to be red all round, I mixed the coloring in at the mixing stage, so the entire batch was red.

Sift the icing sugar. No shortcut here. Some brands of icing sugar are less lumpy than others.
Melt the gelatine in the water. Add the glucose and glycerin into the warm gelatine mixture.

With the K paddles at slow speed, gradually add in the mixture into the icing sugar, until it all binds together. Scoop out the sugarpaste onto a surface that has been dusted with icing sugar, and knead until you get a nice pliable blob.

And then, last Monday, Lionheart tells me that he's actually having TWO parties for his little princess, and needed a Cookie Monster cake for the dinner part. Up till that point, I had no idea WHAT Cookie Monster looked like. Thank goodness for the easy accessibility to such information online. Anyway, here's my 1st attempt at Cookie Monster.

Anyway, the other thing I find really hard to do is to achieve a nice smooth surface for the buttercream, as my buttercream is pure butter, as opposed to the Wilton one, which uses shortening, which I find exceedingly gross. The Wilton "butter"cream however spreads marvellously and looks gorgeous, but you can taste the lingering greasy slime of shortening on your palate, and fingers.

They were my birthday present to the Little Princess. 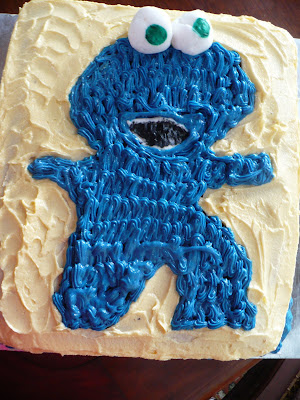 Hahaha... it looks like a small kid's drawing :P

I think you did pretty well for both cakes. Seriously, I won't be able to do this kind of decorative stuff.So much work! I don't think I can earn money from making kids birthday cake....

First, if you dowan ppl to laugh, you shudn't write out dun laugh! I didn't plan to laugh, but after what you wrote and looking at your pikchers, I couldn't help but laugh!!! LOL

Your colours are sooo vivid! And looks like Picasso Sesame Street liddat... :D Hey, that's a compliment BTW. Your dry wit is all over the cake!! That means whenever someone see a cake like that, they know it's an authentic FBB creation! :)

they are both really cute! must taste great with all the butter!

I won't laugh cos I know if you let me do it, sure it turn out worse. Anyway..cute ma...can still see that it's Elmo and Cookie Monster. But if your cookie monster is in purple, looks a bit like barney!

Hmm...I didn't laugh for the elmo one, but the cookie monster a little out of shape. BUt good attempt! Cos i only attempt butter cake and lemon butter till now.

The blue butter icing was really tasty, altho i ended up with blue icing all over my teeth!

You can use the edge of a parchment paper to scrape the surface of the butter cream. Always move the edge in one direction.

wahahaha..its a good effort..but man it looks retarded kekeke..i wonder what the birthday girl reaction was..?

sam, eh, have you started your blog yet huh? i clink on your profile and blog got nothing yet?

sunshine, its BUTTER and SUGAR...how bad can it taste right? i could eat it just like taht.

precious pea, thanks for not laughing. [licking wounds]

tracy dear, you're a real chum.

kat...hahah, picasso sesame street. thats an idea hor, just tout it as that.

mandy, you're right. its hardly worth the effort. actually in thailand sugarpaste cakes are so cheap, coz labour is cheap i guess, and they're so good with their craft. if only i could import a worker...

jason, oh, so you can identify with it la in which case....?

elmo head looked a bit like got chopped off and put on a platter (sori, a bit gross). suggest dat u just put a smile with black icing rather den make open mouth ... less scary, if u ever get arm twisted to do it again! =)

cookie monster - suggest throw in a few chomped up oreo cookies all over da cake and pretend dat cookie monster left dem there afta skipping town! no nid to draw the fella ... how convenient, hor? =)

Well, I for one would have done a lot a lot worse if you asked me to do the deco (hehe...does looks like you use two hard boiled eggs for the eyes) but am sure it would still taste very good. A cake with humour!

tummythoz, glad to be such a beacon of delight...hahaha. you are too kind. which is more than i can say for some of the brutal, brutal comments that has reduced me to tears like a 3 year old going to kindy for first time.....hHAHAHAHAHHAHAH.

u make miss sesame street. And you are such a sweet dad la.

u know, if i try my hand at this, i wont be able to call it elmo or cookie monster.. (might give them a new name to save my embarrassment)... yours looks cute and adorable! More importantly, they are the right shade of color too.

teckiee, whoever you r, thanks for the elmo song lyrics! my son has been badgering me to sing him "elmo song".

reading ur comment reminded me of how it goes! thanks. lol =P

Lama tak comment here. I too make birthday cakes for my kiddies birthday last 2 days. Both of them were both 1 year and 1 day apart. I have to bake 4 cakes, 2 for school party n 2 for homes. Since I'm not as good as you, for my daughter's cake I just used fondant and my sons cake I just slapped some choc ganache and top with is cars and tree and so on. Too malas to make cars with the fondant. No time lah.

look good and cute!! I can see Elmo at my first glance...you're too humble:)

fbb in no time you will be the master of icing & cream cakes, trust me! :)

uploaded some stuffs already on my blog. me very lazy person LOL. Sorry.

SAM!!! unbelievable stuff you have. they look EXQUISITE!!!! i am not worthy.

BBO, you too kind, but i really doubt it la, coz i got no patience.

beachlover, you're ALSO too kind...hahah.

daphne, yeah, i thought the colors were nice hor.

teckie, those cakes were for MY kids...