One Night In Bangkok Makes A Fat Man Grumble

....because of the vast array of culinary delights, Bangkok really is a disaster zone for those wishing to diet. Yet, oddly enough, one rarely sees a fat Thai.

Contrary to popular belief, I am an exceedingly romantic person. When I and the spouse go on holiday, I dutifully do all the things that a good tourist should do. 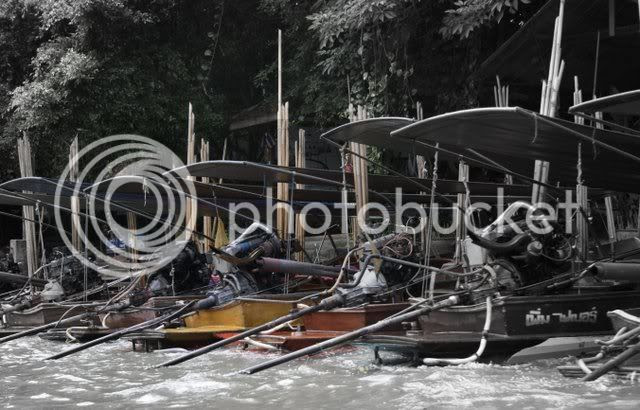 We went on a cruise. Okay, its not the Greek Isles, but hey, a river is okay too. 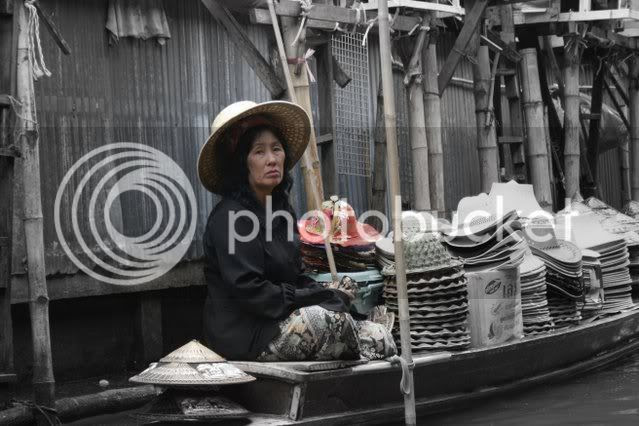 The Floating Market is one large floating souvenir shop. Tip to potential visitors to Bangkok, you can skip this part of the itinerary and you won't have missed much. Trust me. 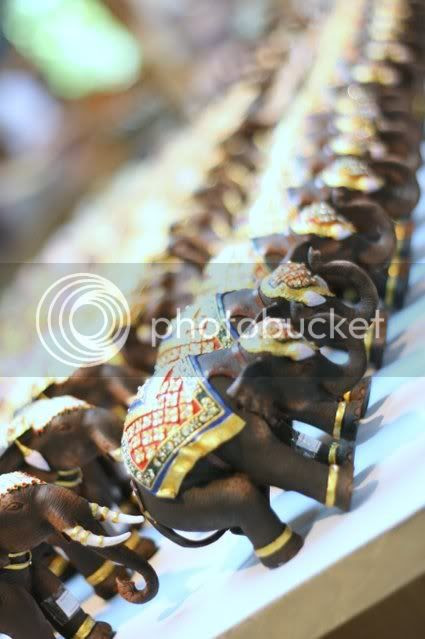 We went to the mandatory souvenir teak factory, and checked out the wild life. Reminds me of Colonel Hathi's Elephant March in Dumbo, the cartoon. 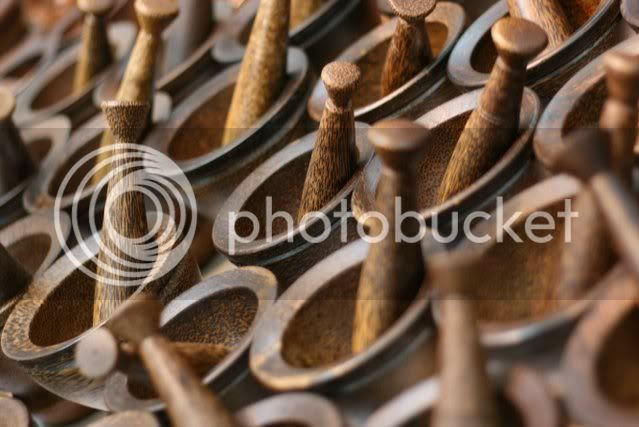 We try to be cultured, and take pointless photos of mortar and pestles. However, the workmanship is rather exquisite. 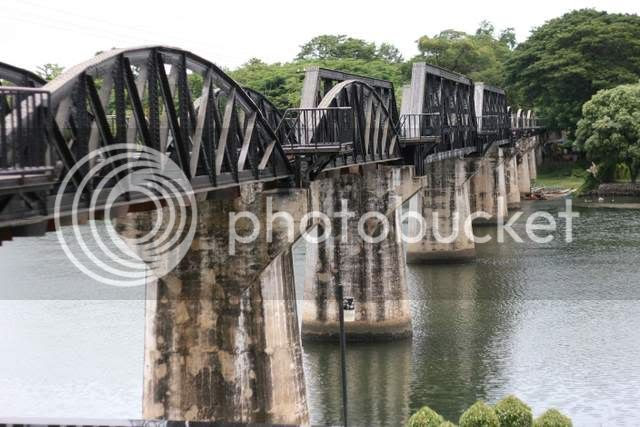 We visit historical sites, such as the Bridge over the River Kwai, aka the Death Railway. Looking at the serene tranquil landscape, one wonders how it got the moniker, DEATH RAILWAY. Ooh, check out the pic in wikipedia, same location!!! 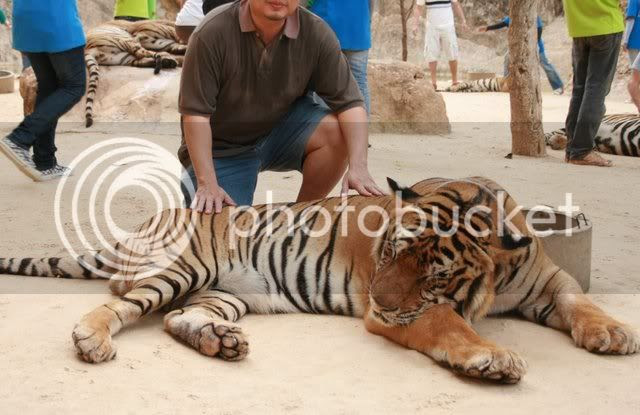 We played with Pussy.
A controversial issue, are the tigers drugged, and exploited as per documentary in (National Geographic? or is it Discovery?) TV? According to the volunteers working there, (Aussies, so that gives them credibility no?) 1-4pm are their napping time, and you can see them trooping around after 4pm. Well, I have to say, they are real hunks. Muscular and strong. No pussy at all. 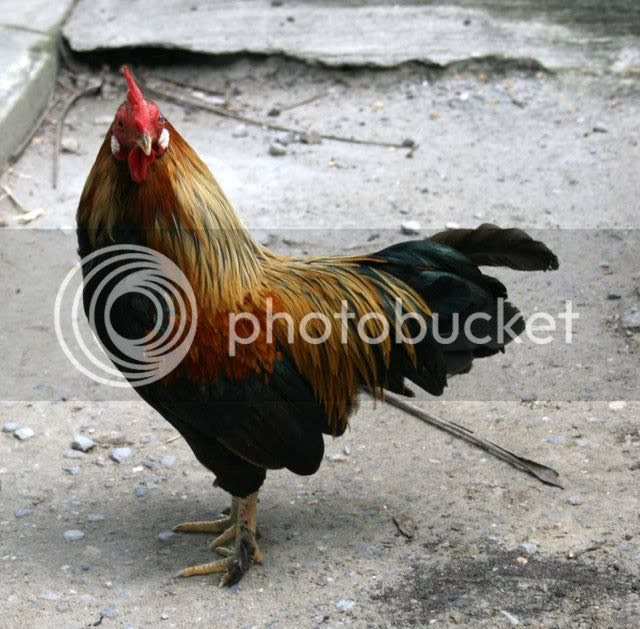 Of course, to be fair, we mustn't only see pussy, but must talk cock also.

We also try to be happening, and hangout at places like Vertigo, where the drinks bill can induce such a feeling. 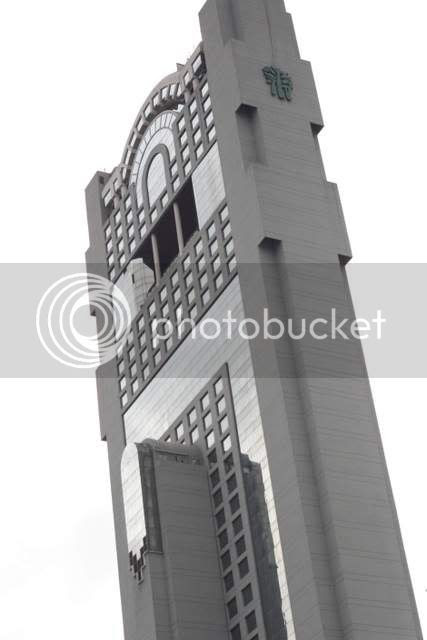 Our hotel is located just next to the Banyan Tree. How convenient. We stayed at the ALL SEASONS Sathorn. ALL is better than FOUR, of course. 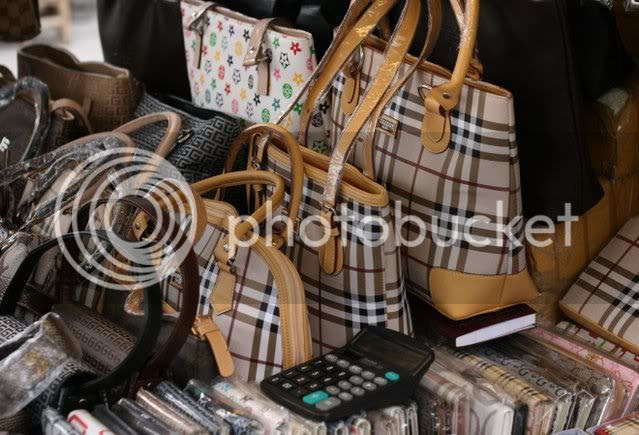 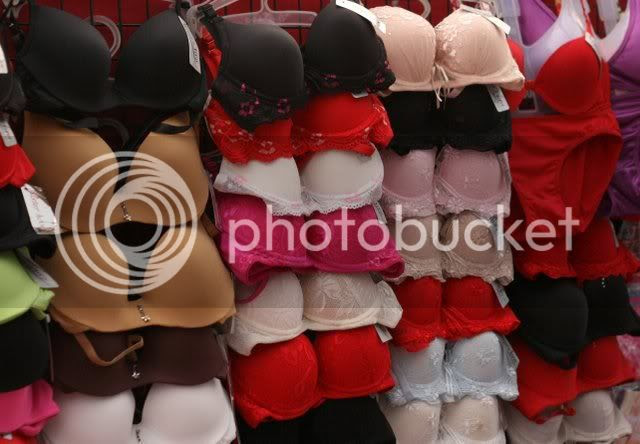 .....only the finest lingerie for my woman. 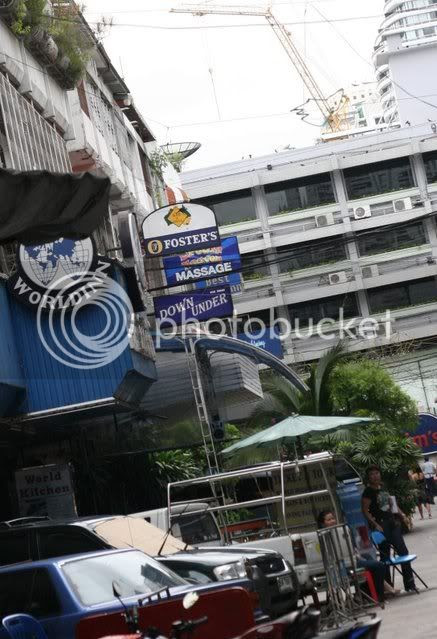 Massage Down Under.... Ooh la la, alas, we stuck to the mainstream ones. Those Thai massages where you are fully clothed in makeshift pajamas. 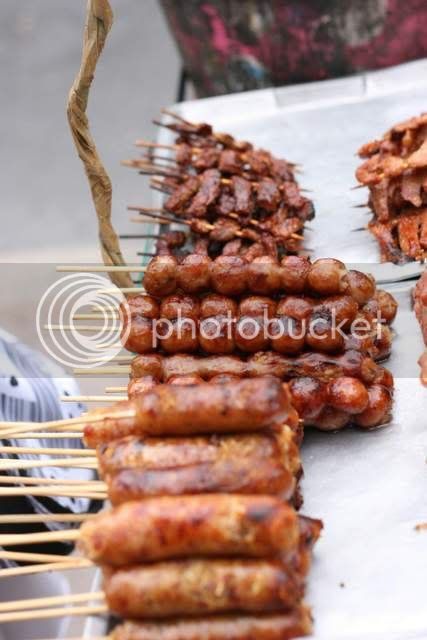 And of course, gourmet food.

Now that we've gotten the touristy things out of the way, the real intention of going there, ie, to EAT EAT EAT, can now be narrated. But darn, I've run out of time, so I shall continue in a part II, which I don't usually do. Nothing annoys me more than watching a TV series that ends with ...."TO BE CONTINUED". It makes me want to rip the TV out of the socket and fling it to a wall. But dang, I gotta run.
Posted by fatboybakes at 9:31 AM

LOL i lurve this post of yours, dang hilarious

Lovely travel pics (along with the pussy and cock shots, Hahaha...)Oh, my post on travel definitely like travel series with so many parts to them! :o)

Did wmw just say "pussy and cock shots"? My oh my this is indeed another side of you, sir... Wilder to say the least. ;)

I had to skip the whole narrative due to your warning in red. Nice pics, though. Interesting choice to go with B/W in a world of colour. Brilliant. I stand (bow) in awe.

you ARE a romantic heart! designer bags, gourmet food ... and summore, ask for 4, you give ALL seasons.. damn generous. (remind me to tell my hubs to give me what i ask for.. no need improvise.. harharhar). cute post! keep em coming!

hahah the most raunchiest i have seen in awhile..ohh my eyes..

but "why so serious"?

lemongrass, oh goddess, how can i ever even hope to be half the writer and blogger that you are!!!!

wmw, yes, we are quite aware of your travel epics...makes the odyssey look like a windscreen pamphlet. hahahahah!

one of your most entertaining blogs ~ hilarious !!

your post is soooo in-line with the vividness of the city of bangkok...

and what's that long, grey, sticky thingy stuck to that poor cock's *$$???

Don't tell me there was actually a cock parading in BKK for you to snap a pix of?! :P And tigers actually allow strange people to pet them when they are napping.. right.. such deep sleepers they are..

Your woman is one lucky chick. A husband who cooks AND takes her for no-expense-spared shopping holidays, . Where to find, aiarseu? :D

kat, yalor....forked out a princely sum of RM750 per head on airasia for the 4d/3n package leh, flights & hotel & breakfast. aitelyu, she is SOOOOOO lucky. yes, there was a cock parading around.

hairy berry, guffaw, such rapist wit as usual. oh puhleez, that aint sticking out of the cock's ar**.. its just a metal rod lying on the ground. but ya hor, now that you mention it.

enough innuendos, at least you can write this one off as a gem.

I blushed, I chortled, I blushed again. Thank goodness I wasn't at the office pretending to work.

DO they serve pussy cock there? LOL

dee, you blushed? awww, why ah? glad you chortled though. heh heh. glad u like the pic.

henry yeo, thankyew. (not sure what you meant, but it sounded complimentary enough)