As I was saying, there is no shame in holidaying with the kids LOCALLY. We did it when we were young, and God forbid that my offspring should grow up thinking it is their right to get their passport stamped everytime the school holidays come. Too bad, if in their essays on "what I did during the school holidays", their classmates tell the class about dining at Gordon Ramsay's restaurant in London, or they went tracking to the Tiger's Nest Monastery in Bhutan, and stayed at the USD2000 a night Umar Paroi resort. Nah, no no no, my character building involves cheap holidays, if possible, national service, and cheap eats along the way. Nothing sends more shivers down my spine than parents who tell me, "My kids eat only haagen daz", or "My kids don't eat in coffee shops, because no air cond". Trust me, they exist, these little brats.

So, here we are, bundled up in the wife's bus, heading towards Ipoh. Why Ipoh? Oh, there's free accommodation there for us. A relative's house. The kids get to play with their cousins, from dawn to midnight, the place has as many computers as a small cyber cafe, ....it really doesn't get any better for them. Which kid would rather be looking at art in the Louvre, rather than romping around with all day playing Runescape and other interactive games and ......indulging in some token outdoor activity?

I've been craving for the famous Pun Chun Duck Noodles in Bidor for years now. It's the nostalgia, of a carefree youth gone by, I guess. 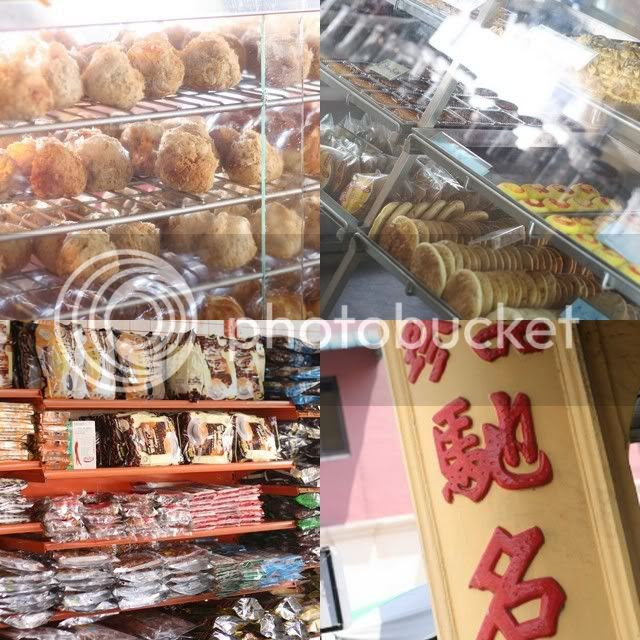 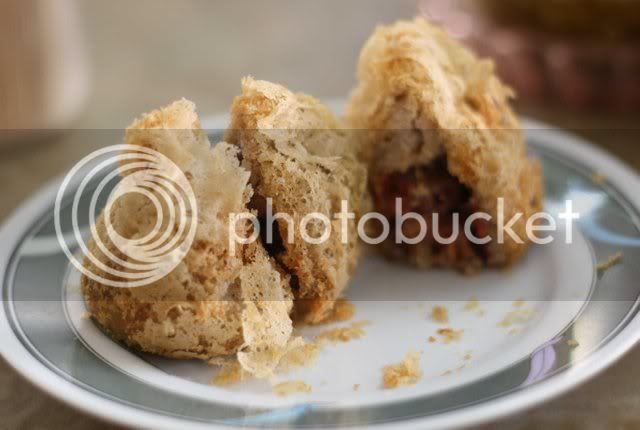 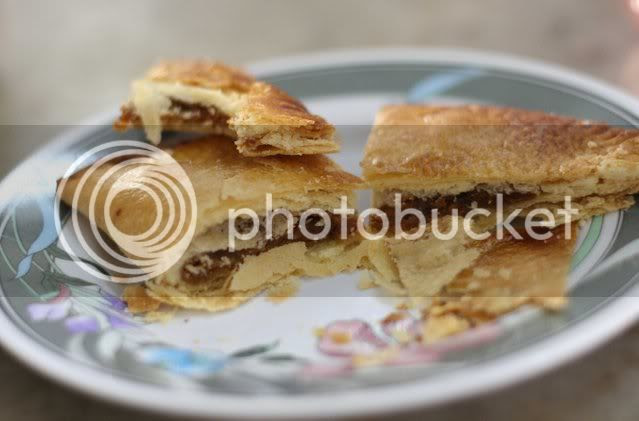 Their famous yam puff and kaya puffs. Well, I found neither to be much to shout about, to be honest. But it's not bad either. A nice breakfast. 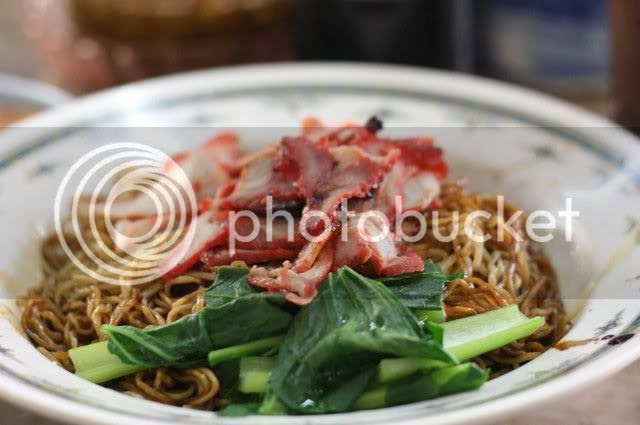 Wantan noodles. The noodle texture is nice and "song", but I dont know about these northern charsius that all look a bit too red to be real. Wonder what kind of red dye they use. 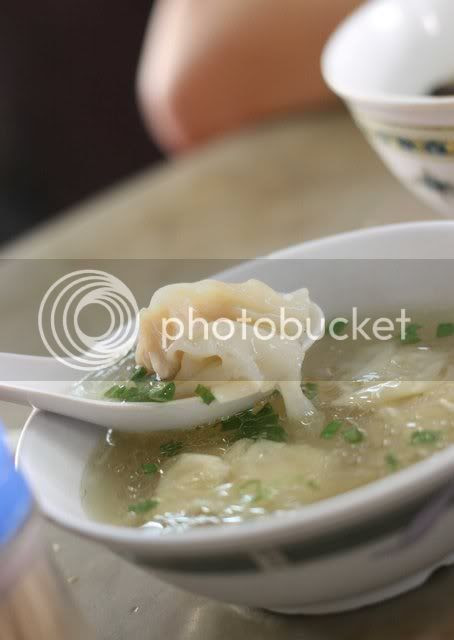 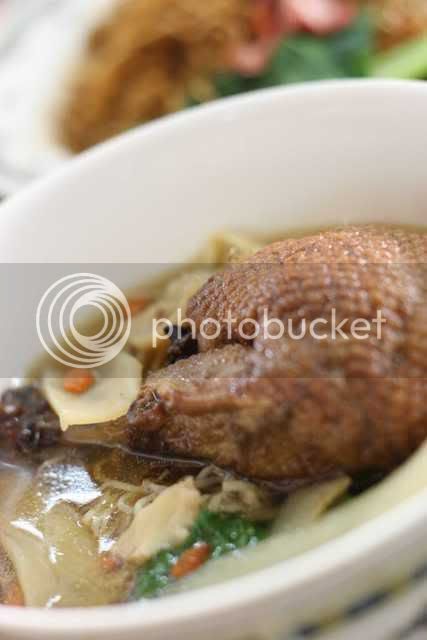 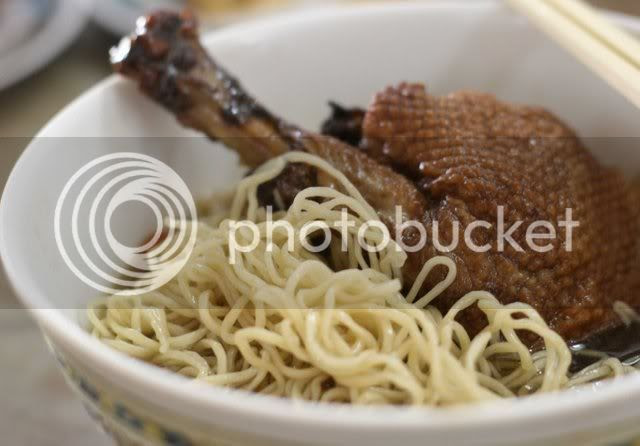 The famous Ngap Toi Mee. (Duck drumstick). Actually, it is rather yummy. The soup is a nice herbally soup, with chinese wolfenberry, strands of tong kuai, etc. I would have preferred the soup to be hotter. I like my soups piping hot. For some reason, it wasn't. Anyway, my breakfasting experience was completely ruined when one kid knocked over his newly arrived glass of Milo ice, spilling it over the brother who then wailed like a woman who's Dolce Gabanna had had red wine thrown over it.....roll eyes. Kids these days. I swear they, the boys, especially, could do with a good dose of Outward Bound School, or better still, Royal Military College.

Another 40 minutes later, we were in Ipoh. Before my bro in law moved up, it was inconceivable that I would ever vacation in this sleepy town. Even Ipoh folk express surprise knowing we're going there for holiday. I have to say, the Ipoh Kueh Teow in Ipoh is EXCELLENT. Unlike Hainanese Chicken Rice in Hainan Island, which is absolutely gross. But that's another story altogether.

No trip to Ipoh is complete without eating at my favourite Ipoh Hor Fun shop. 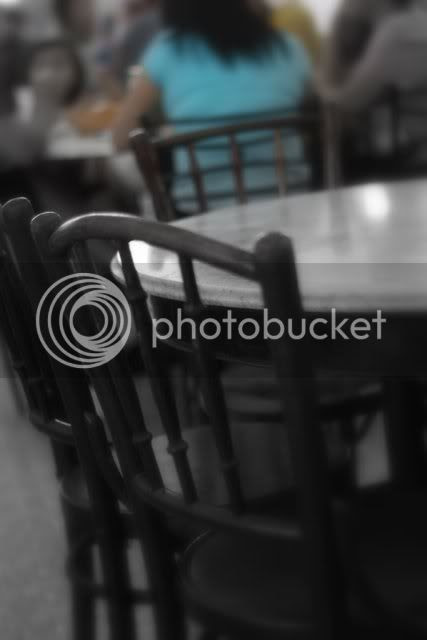 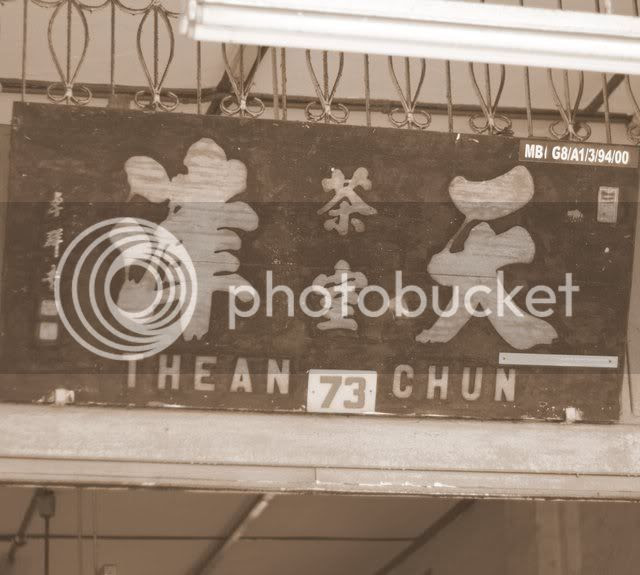 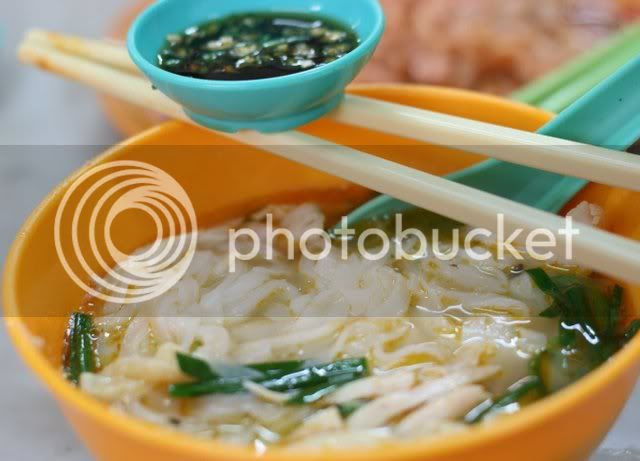 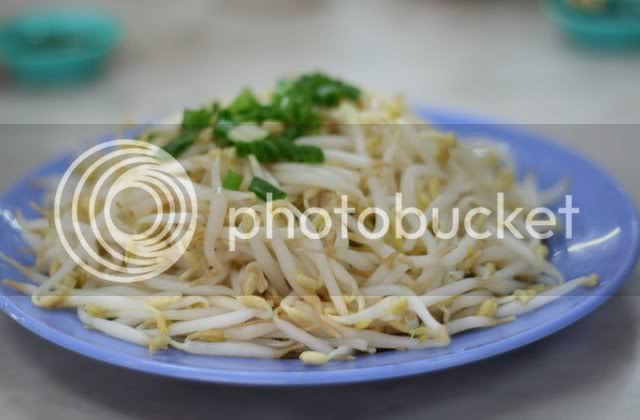 Rumour has it that Ipoh girls are all beautiful because of the water that trickles down the limestone hills. Obviously its a myth. However, it is true though that their taugeh is super plump, and juicy.
Moving on in the food crawl, next stop, dessert. Ipoh Coffee at Sin Yin Loong, and caramel custard. The coffee is divine. Nice and kau, if a bit diabetes inducing. I think any specific order for kurang manis, in any language, just falls on deaf ears. You might as well be telling them, I want to sleep with your mother. 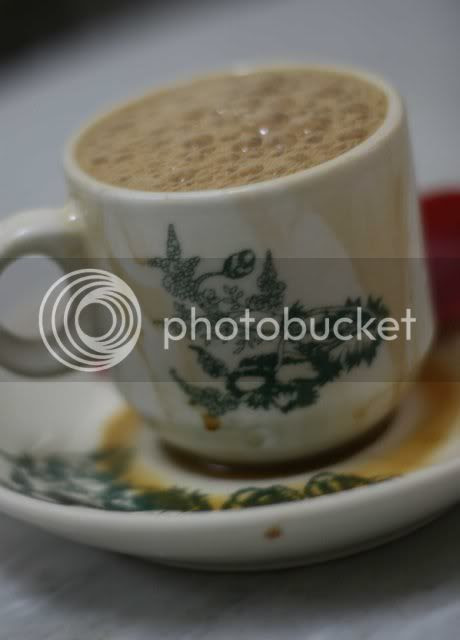 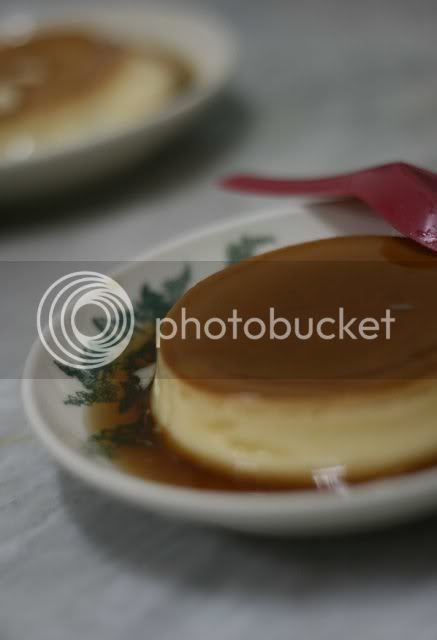 Sweet, sweet and more sweet. Not exactly my thang, but well, once in a while, and also not to appear too antisocial one indulges. I am not a caramel custard fan, but I can see why the fans would ooh and ah over this one. Silky SILKY smooth. Gorgeous texture.
We then went in search of the famous Tau Foo Fa "drive in", a hole in the wall, basically, but with queues of beemers and other luxury cars awaiting their turn for a bowl of this. 80 sen, and worth every cent. Smooth and almost creamy. 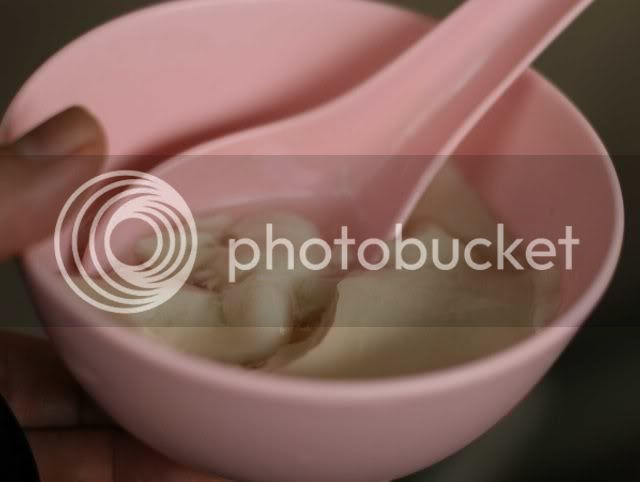 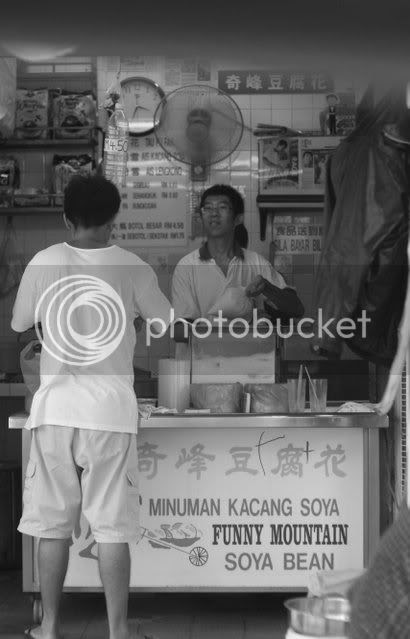 Dinner was the famous ngar choy kai. (Bean sprouts and chicken). It was pouring torrential rains and we got out the sampan to row to the restaurant. Malaysians are unperterbured, and don't mind getting their feet wet as long as their stomachs are warm. 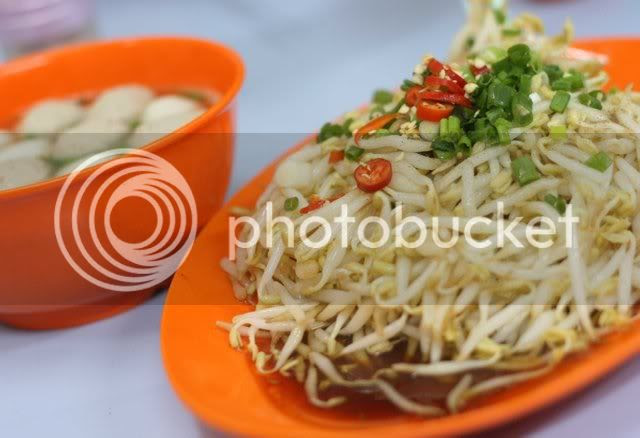 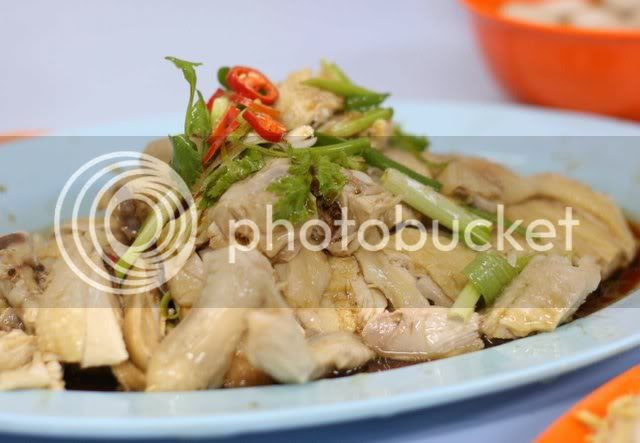 I did learn something new though. When you order rice, its only white rice. They don't serve the yau fan (oily rice) that we've become accustomed to here. Even the Ipoh Chicken place here in Jln Gasing serves oil rice. Apparently that's hainanese chicken rice. Distinct from Ipoh Chicken Rice. Nor do they serve those chilli sauces. But good, nevertheless.

For sake of expediency in downloading the page, I shall break the post into two.

I love the coffee and atmosphere at Sin Yoon Loong. Didn't know they had custard too.

Yeah, no yau fan at Lou Wong and all those places - weird esp since they have all that chicken fat!

my funny bone was expected to be tickled by (hopefully) a joke on the name of the soy bean shop.

instead, a maternal joke caught my attention...haha!

i like that pic of that woo cock...very au naturel.

oh, the colour of the wantan mee spells au naturel as well. i mean, not much alkaline water, right? or...'right'? haha!

hairy, with a name like FUNNY MOUNTAIN, i dunno how else to comment ler... snigger. its probably listed on the hong kong hang seng...
wantan mee color? huh? blur look?

you ate at all the places we love! we balik kampung 3 times a year- gpa's bday(92 candles) gma's bday(87 candles). we love bidor duck, house of mirrors and funny mountain! the only one u left out was the chee-chap-chok with the huge ass fried intestine and blood cubes.. mmmuah. Great choice Ipoh! i am all for local hols esp kicking back and relaxing in slow paced, lazy ipoh..

ciki, oooh, where is the chee chap chok? love intestine, but no blood cubes for me ....no no no, am jewish in that respect. wow, does the longevity gene run in your family? u dont have a cousin called richard foo do you?

I dunno, I was about to say no blood cubes for me too, but then I haven't tried it yet. And I do have this rule about trying EVERYTHING at least ONCE... :P

Hahaha...I think I went to the same shop as yours in bidor. On the return leg back to KL, detoured there and packed a lot of puffs for the family.

Hello my (instant) Blue Cheese Buddy!!! :) Hey, I've had those "character-building" holidays too, as a kid. Jaunts up to Sitiawan and Ipoh, stopping along Bidor occasionally. I remember chicken biscuits but I never got to try all these yummy food!

hi, IBCB. thanks for dropping by. so are u msian by origin? i lurve blue cheese on pizzas too.... sadly, no one else does.... so i only get to eat that if i make my own. sitiawan? you foo chow ah?

henry yeo, i think that's the only famous shop in bidor.

LFB, i know, i am usually very adventurous when it comes to food, and i THINK i've tried congealed blood before, ....

The Bidor Wantan mee is good, didn't care for the dim sum though. Always tar bao back when I came back from Penang to KL.

The Ipoh Hor Fun is D-ivine. No one can do that better.

Pun Chun - what for wanna drive so far? Now can get at Kota Kemuning oso.

Then again, going to Kota Kemuning is like driving to Parit Buntar liddat.

Yeah, no yau fan here in Ipoh. Guess the Ipohans are not fond of it.

I sort of grew up in Ipoh until I started school. Then we'd go back to Stone Elephant during every August school hols for grandfather's big birthday feast where he'd hire these 'caterers' to prepare the food. I use the term loosely because these guys are more like restaurant cooks whom you hire to cook in your kitchen. Helps that you have a huge shophouse to avail to them because these guys are pros who provide everything from stoves with flames that can reach the roof to huge boulders of ice covered with sawdust for you to break with an ice pick! Yeah, I am that old.. :D

Anyway, he'd have something like 20 tables every year and we'd take over both neighbours' lots for a night of feast and merrymaking. The only time where we kids can snitch shots of brandy into our 7Up and make our own Shandy.

Gootness! This is practically a post by itself! I should blog about it - these carefree childhood days.

Anyway, I am more partial to stopping in Kampar and Tapah for good eats. I still make it a point to detour off the highway once we hit Tapah because I miss all those quaint little towns that we used to pass in the old days of using the trunk road.

Maybe I'm more an Ipohite, but I also prefer it to Pg food. It's not as cheap as you would think but you get far better value. For about the same price you pay in KL, you get much better quality ingredients in Ipoh. For eating rice and dishes, 1919 at Ipoh Garden East and East Ocean at Menglembu are some of my faves. There is one more 'loh chiu phai' in Pasir Putih (or is it Pasir Pinji??) Fook something, I think. Best homemade yee sang. Their dishes are fantastic too. Public Rest in town centre is also very good.

As for ngar choy kai, I don't go the Lou Wong or the other femes one. I go to a smaller shop at the other end of Lou Wong. They make a mean ying-yong hor fun (full of wok hei)and I find the chicken better. The braised chicken feet is excellent. Dunno why, but chicken feet in Ipoh are small ones, unlike the big ones usually found in KL.

Yerrr... now I really want to go back to Ipoh!!