Recently, our Queen of the DSLR, soon to be Queen of the P&S, was featured in the recent issue of FLAVOURS, (if you're a celebrity, I guess its normal to appear everywhere), at a queue leenary (culinary) class at Cuisine Studio. Where she goes, I must follow, as the humble acolyte. So, I was rather delighted when group of old friends, comprising those from the Carrington-Colby era, and the spinoffs, decided to buy me birthday dinner at Cuisine Studio, Tropicana.

I've always been meaning to come try it out, but somehow never made it. From the sketchy details from memory, the place is run by the same people who run HTC, (the french culinary school) in IMC building, and also the gourmet supplies people, Gourmandines. Hence, chefs Jean Michel, Bruno, etc are all involved. They also hold cooking classes here.

Exceedingly stressed, from attempting to make a wedding cake, (will post this in a separate post), I arrived slightly late, but not the latest. Bottles of wines were already flowing. This group still loves their reds, ....me, personally, more a white drinker these days. But then again, they all more high class la. One couple had just returned from Barcelona. The other from Perth. Yet another from Whistler. And another was on the way to Dubai, and Iran. If I got all the frequent flyer points from trips from that table alone in the last one month, I can probably reach Uranus.

We started off with a variety of entrees to whet the palate. Lovely pates, salads, and duck sausage and "waxed duck" to begin with.... 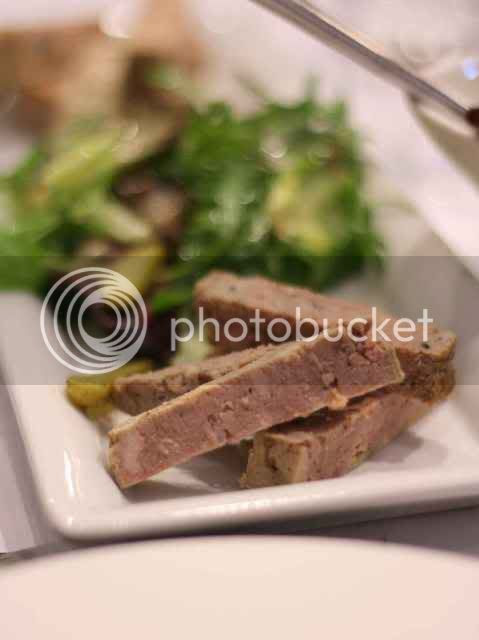 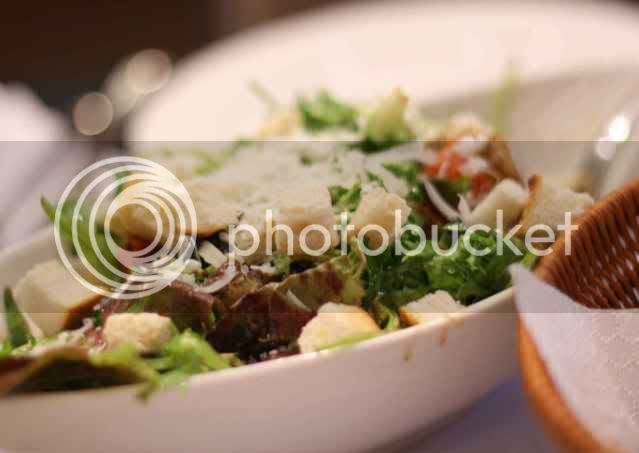 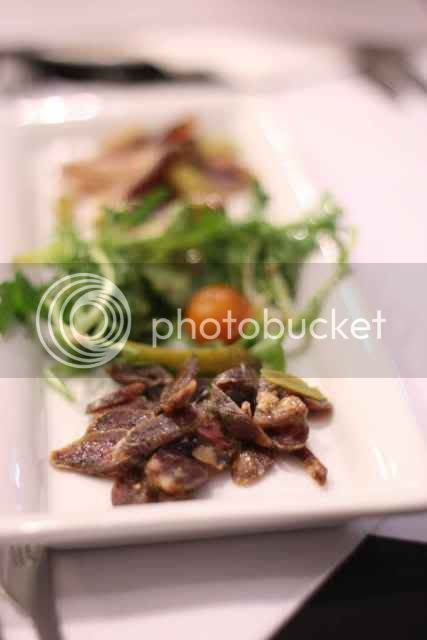 
Then I decided, heck, I am not gonna share THIS, the pan seared foie gras on caramelized apple. A bit pricy, at RM69, but oh soooooo gooooodddddddd. Seared to perfection, the blend of subtle sauces, (balsamic reductions I think) and the lovely caramelized apple....oooooooh....salivating. 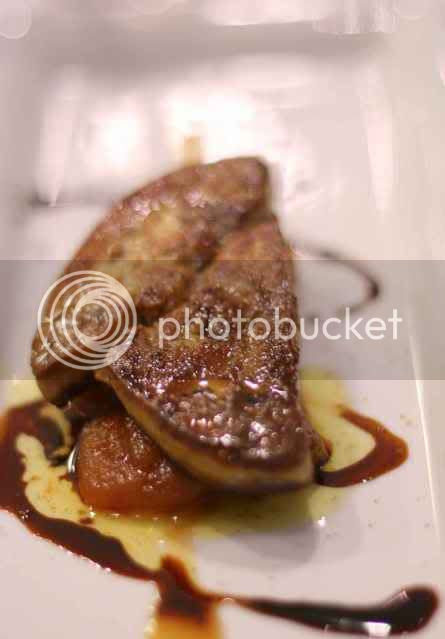 While the idea of eating a diseased liver of a force fed duck may be grounds for boycotting this dish, I personally, [hiding from all the animal lovers out there], am of the opinion, if its not endangered, it should be eaten. Hmmm, what animal wont I eat? Okay, the thought of eating cat (CAT, not Pussy), is repulsive. Crow, vultures, ravens, and other predatorial birds....also somehow seem rather no no. But a duck, awwwwww, that's just calling out for the chopping board. 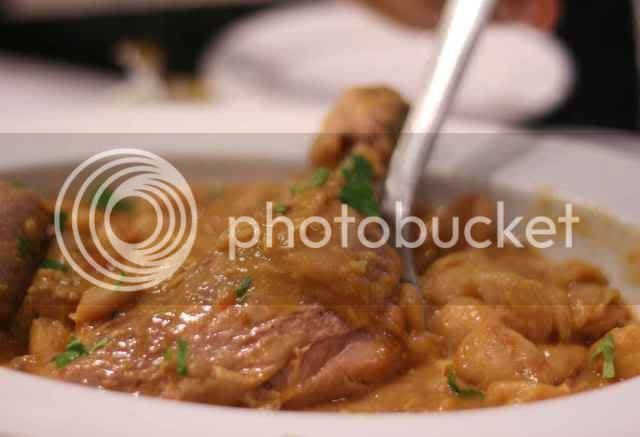 The duck confit cassoulet. More like a duck stew. The duck meat was falling off the bone, but a bit too soft for my liking. It was basically, err...stewed. I remember having the duck confit during one of the culinary classes, and it seemed different then. 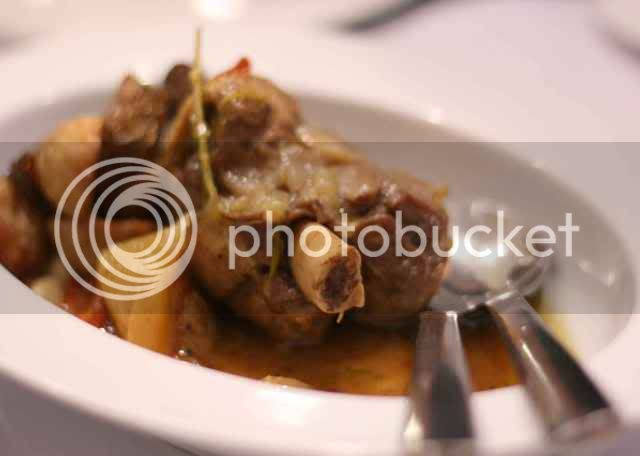 Lamb Shank Confit With Rosemary, Olive Oil and Lemon Confit. Tender lamb meat, falling off the bone, tender enough to be eaten without a knife. 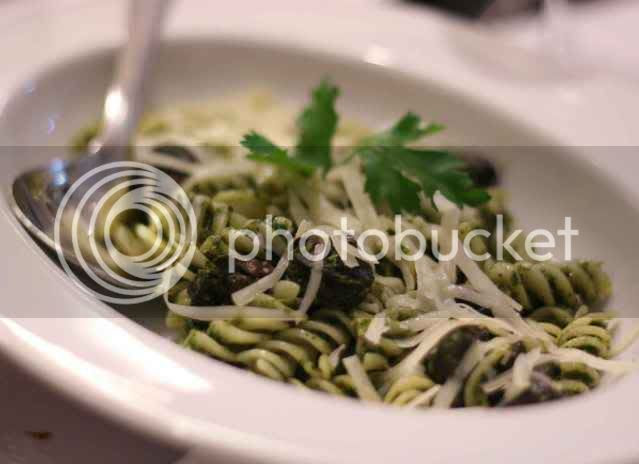 Alce nero organic pasta with basil and escargots. This seemed to be a hit, and we even ordered an extra plate for sharing. Which in the end, was a bit overkill, coz it wasn't finished. 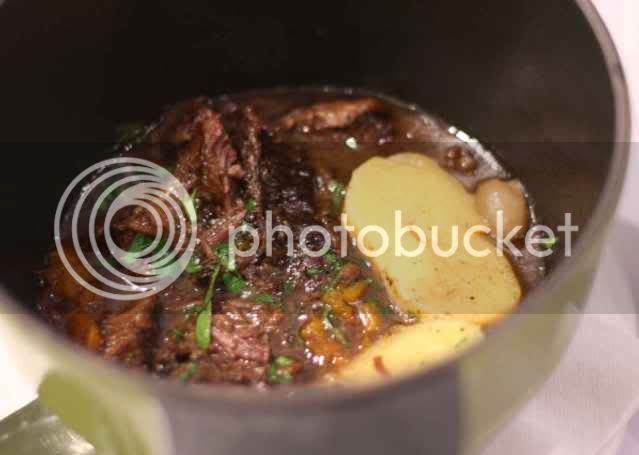 I think this was the Beef Bourgignon. A lovely beefy stew, rendering the beef wonderfully tender, but still flavourful. Real comfort food this one. Wouldn't mind eating this with a bowl of rice. Being the perennial chinaman that I am. 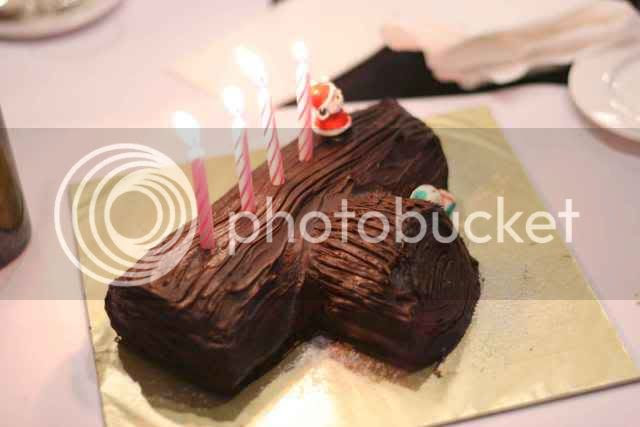 Finally, we decided to celebrate the birthdays of all those born in the plus minus 30 days or so of the dinner, incldg the november and december born. Judging by the percentage, I'd say there is definitely some trend, ....perhaps it was Chinese New Year, that gave people more time to procreate.

My first attempt at a yule log, which I am practising for a very important function. Of course someone commented it looked like turd. Show me a turd in that shape, and I'll show you a strand of Marilyn Monroe's armpit hair. 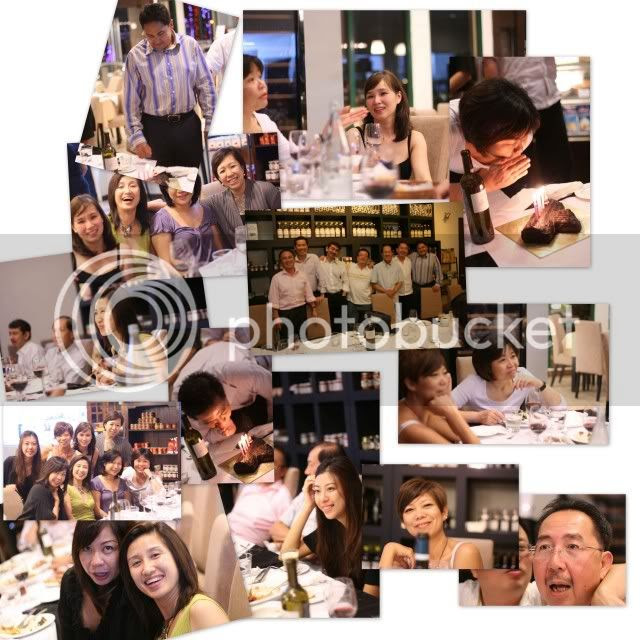 Thank you dear friends for the very lavish dinner. Love you all very very much.

Now, Cuisine Studio is by no means cheap, nor even bordering on "reasonable" by our average standards. However, they do give a good gourmet spread, in a nice casual laid back atmosphere. Nestled in the affluent Tropicana neighbourhood, and located in the Tropicana club itself, I guess it must have its own share of regular wealthy clientele. They also sell a range of gourmet stuff. Can't wait to try my cherry jam. (RM15).
Posted by fatboybakes at 1:24 PM

The word "featured" is too generous, my Tangechi.

Incidentally, I had my birthday dinner at Cuisine Studio too. We're so alike, my lub.

a place where it's best visited during special occasion (for me)
foie gras is always a controversial issue.. same like what I'm doing now.. aiya.. don't care la

Thk you for the warning. Me been scouting ard for a suitable bday dinner for Unka, and your last paragraph gave me the answer. ;p

Such happy happy faces. Sorta reminds me I missed so many birthdays this year... :P

Your log is adorable. *gasp* That sounded a little rude. Maybe just cos its on your blog and everything sounds dirrrteh anyway.

*LOL* re. the Log.
Who said that?? Mebbe they're just jelez.

hmm definintely want to give this a try..portions look satisfying enuf

The Log is nice lar! Mighty fine looking bunch of friends you got there ;)Place always looks empty when I walk pass. Will reserve this place for special occasions given :)

Their bakery section is also superb. Had so much of it when my bro was still there.

I love the pan seared foie gras too... tried to copycat at home - not the same.

amelia, must try to make caramelised apples too la.

monkey, you think ahpa so duhh ah? of course i put snow, but the wrong kind, and it "melted". sprinkled icing sugar but it got absorbed. dont worry, your log will have white chocolate.

kennymah, yalar, doesnt it remind you of louis armstrong's its a wonderful world?

TNG, well, uncle has his heart set on going.

thule, no worse than castrating a chicken i guess....

Your log looks nice and chocolatey wat. Good idea on the grated white choc. At first I thought it was grated coconut!!

Eh, if you are still going to Bake with Yen or Chang Tung before Christmas, can you please get for me some Christmas cake toppings like lil Santas, pine cones, etc? They are usually not in stock when I come back, so got no chance to buy them.