A lazy Saturday afternoon, spent overeating, and overeating..... how decadent is that.

Actually, it wasn't so lazy, as we had to kinda "work for our supper", so to speak, as we were invited to the Jarrod and Rawlins new test menu sampling. By we, I do not presume to use the royal "WE" but really, some other food bloggers, like the famous pair, KgBoy&Citygal, and The Nomad Gourmand. The other young bloggers present, who should be calling me Uncle, I was not familiar with. Elaine, that PYT from G2, the PR agency, was young enough to be my daughter. She brought her dad in tow actually, who is a hobbyist photographer, and had all his canggih equipment to take pics of the food. 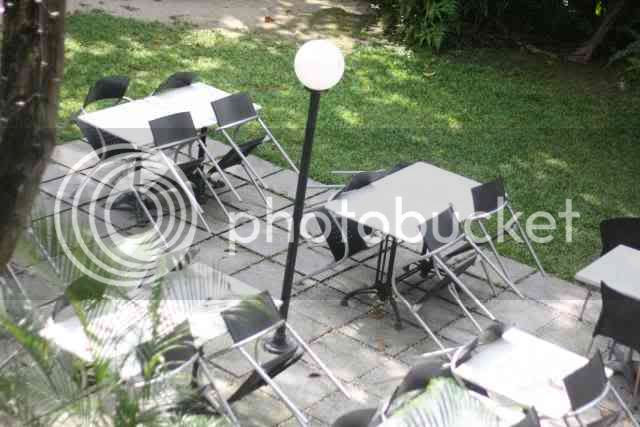 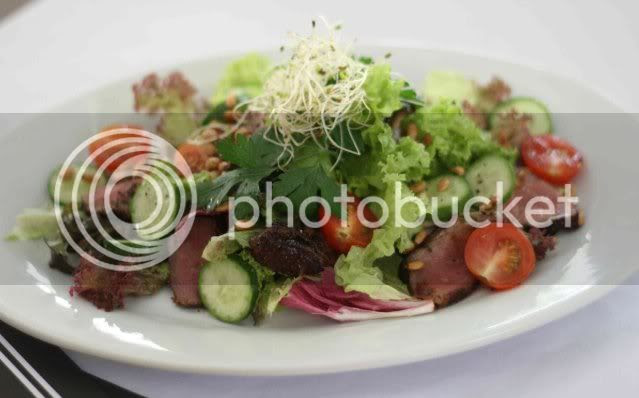 What a happy looking salad. Colorful, attractive, contains smokedDUCK breasts, has pine nuts, I could eat this kind of salad on a regular basis I tell ya. Sometimes, some ducks feel like they've been working out at the duck gym. They're tough as hell. But this particular drake, or duckess, had the requisite tenderness for it to be served with the salad. RM26 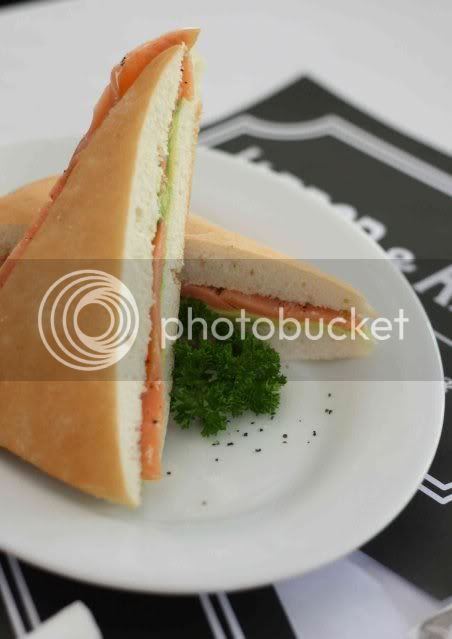 Smoked Salmon With Avocado and A Panini that I felt was a bit too ....what's the word? Dry? Stale? I might have been wrong, since some people seemed to love the bread. Smoked salmon and avocado however is like Romeo and Juliet. Meant to be together. RM24 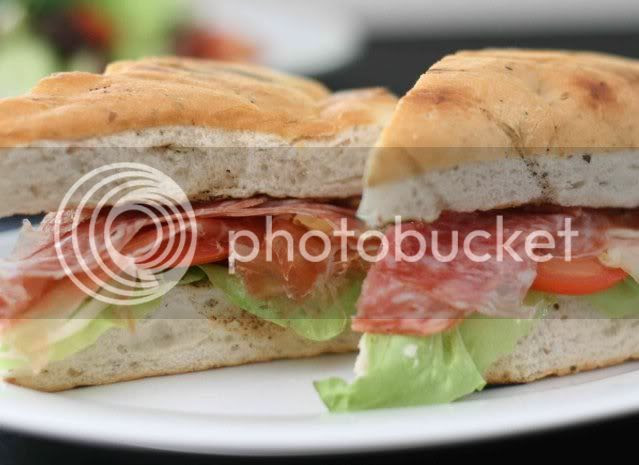 MMMM, delicious serrano ham with salami and ciabatta. This bread was much better, soft, and moist. Well, not MOIST MOIST, but you know, not dry. Gawd, Anton Ego will roll in his grave if he read my descriptions and abject lack of culinary adjectives.


Calamari Salad, with rocket and alfalfa sprouts. Alfalfa is like durian. You either like it, or you don't. I've been told its terribly healthy though. Me, I think I like it. RM18. 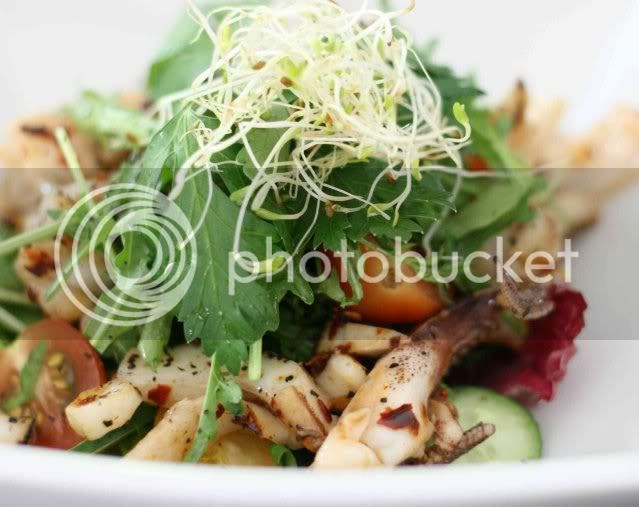 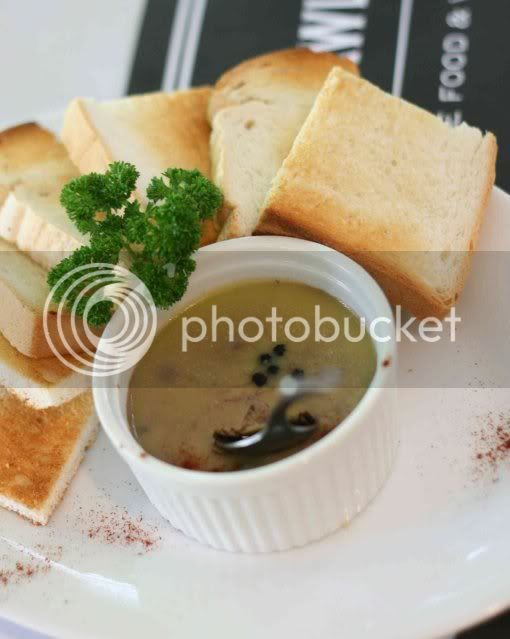 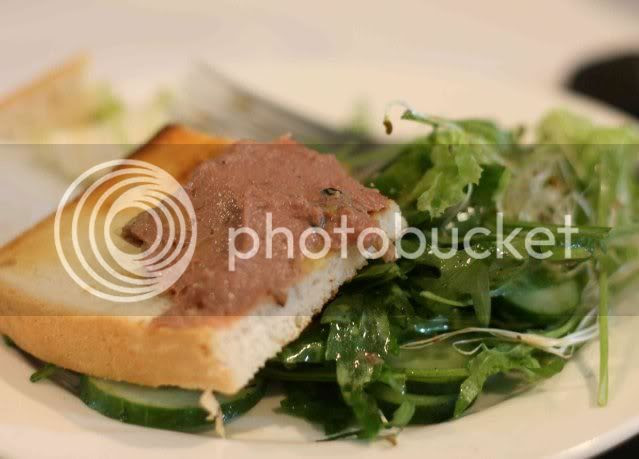 Absolutely decadent chicken liver pate. Mmmm, I could eat dollops of this stuff. Really good. No livery taste, but yet, livery in a rich sort of way. You know what I'm saying? I mean, it doesnt taste like the liver adults force feed the kids with saying, EAT THIS, ITS GOOD FOR YOU....Oh, the clincher was that it contains Sherry AND Cognac. Yummay. RM19.50 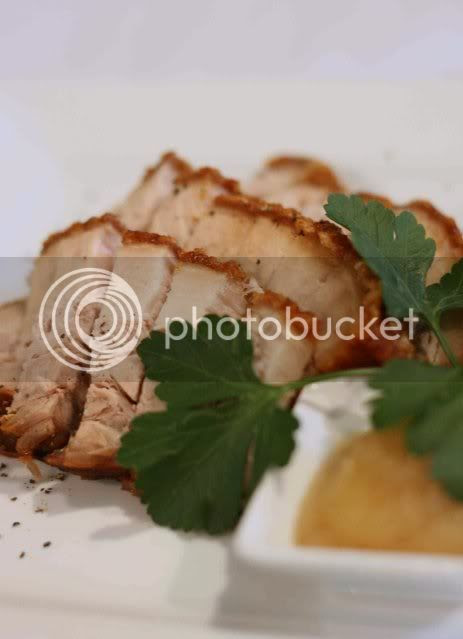 Their signature Siu Yoke. Taste wise, good, but it was cold, and it wasn't coz of the floggers chilling it with the photography. 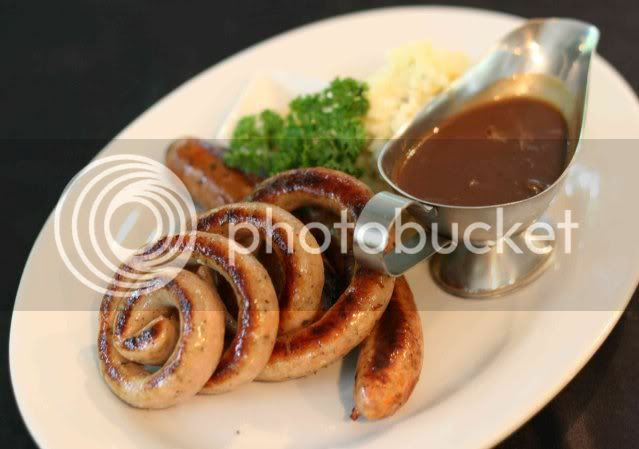 The cumberland sausages and Dynamite sausage. I know what must be going through everyone's mind when they first see that twirly whirly sausage. But the sausage was good. I prefer the straight sausage than the curly one. It has a kick of chilli in it. Hence the moniker, Dynamite. RM by weight. 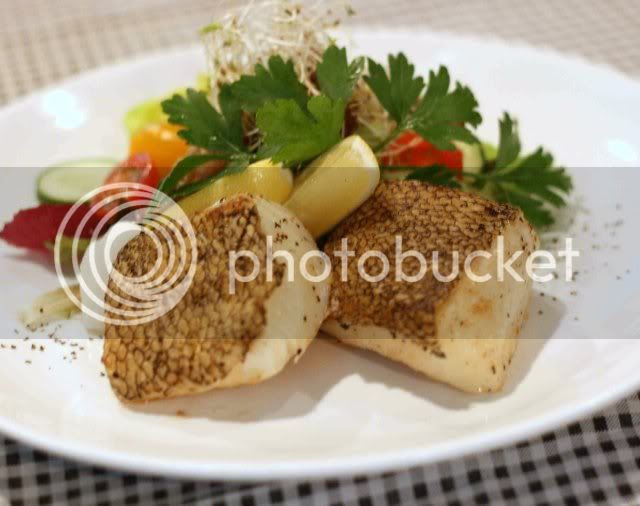 Pan Seared Alaskan Sea Bass. Which we thought was Cod. However, the sea bass was fresh, and the texture firm. I am always very wary about ordering fish dishes, coz seafood here (in this country) can be as inconsistent as our politicians and their policies.
RM 16 /100gm 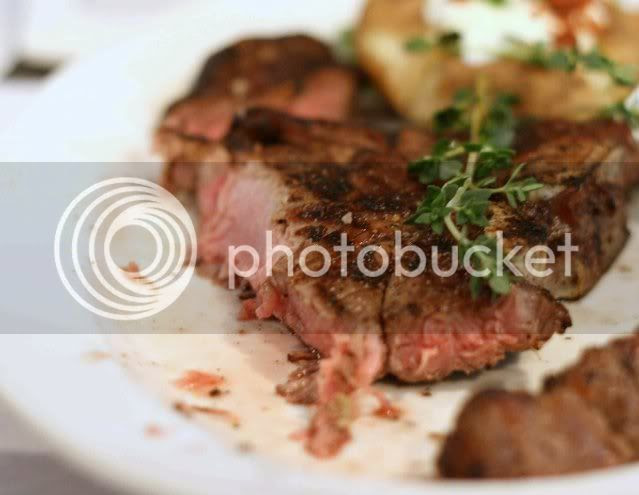 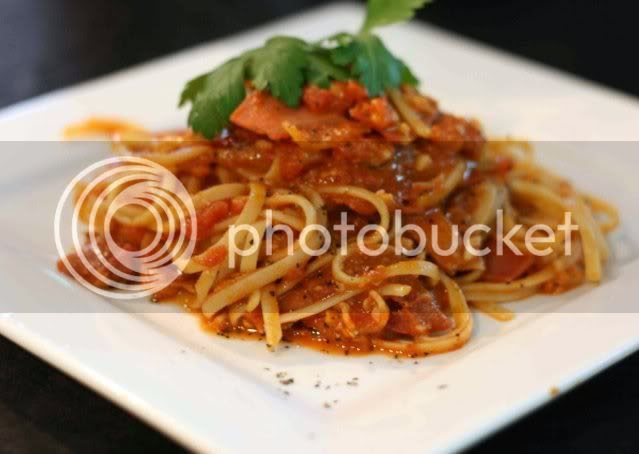 Another house specialty, the Serrano Ham & Bacon Pasta with Dried Chili & Olive Oil. By this time, we were up to our noses with food, so I probably only had a strand of the pasta for taste. So I can't remember what it tastes like. 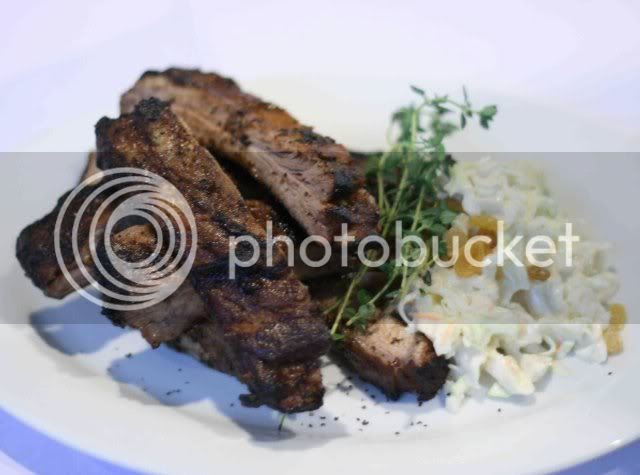 Their Hickory Baby-Back Ribs. Yummy. See, this is what I mean, stick to the pork dishes. It really is their forte. Succulent and tender. Looking at it as I blog, despite the lousy pic, makes me salivate like a hungry puppy. Albeit a fat one. RM12/ 100 gm 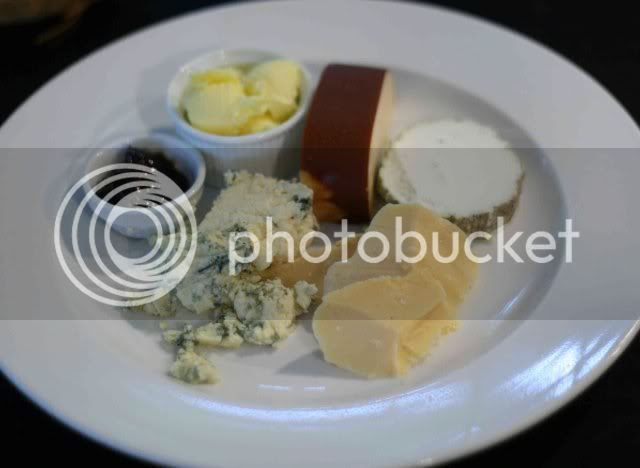 Finally, our cheese platter. Actually, not finally, there were cakes as well, but I couldn't stay. Stilton, old amsterdam, a lovely smoked cheese, etc.

As with all testing menus, there will be hits and misses, but more hits than misses. I've never really taken J&R as a serious "food place", more a place to chill, while munching over porcine delights, but looks like I have to reconsider my original assumption. It does have stuff for a proper dinner.

This particular branch is the one located at Lorong Dungun, next to Aliyah.

Thanks to Elaine of G2, for inviting me, and thanks to Sean of Eat Drink KL for giving my name to Elaine.
Posted by fatboybakes at 2:31 PM

My mum fed me too much alfafa (she grows them) when I was growing up. These days, I choose to stay far, far away from it. =P

The pork ribs looked slightly charred and its original taste retained rather than marinated... this is what will make me go :)

u be the drake, and I, the duckess! LOL.. lovely shots.. looks like time for me to go REDUX too :P

wanna come? (think not.. since u just ate there:P)

hihi, nice meeting you that day. it was a great and enjoyable late lunch :)

Thanks for joining us for this. It was great meeting you and resulted in great blog entry!

Methinks 'Duckess' should be in the Urban Dictionary :)

I love J&R! just went there last saturday for some Guinness lovinnn

KY, oh? they got good guiness on tap? must go.

J and C&C, we can go there for drinkies while yall eat.

thule, the pork ribs were yummy.

with your words of assurance, I will definitely go for the ribs one day :)

hello! nice meeting you for the very first time! ;) followed your blog for quite some time dy actually :)

"I prefer the straight sausage than the curly one."

I would go there for the sausages alone. it looks really good. yums!