I think the concept of INCEPTION is real. It is quite possible to plant a thought deep in the recesses of one's mind. For example, I distinctly remember reading in EatDrinkKL's post that Kuriya is BSC was poised to become one of the best and busiest restaurants in Bangsar. Had it come from some other random food blogger, I'd have dismissed it as one waves off a pesky fly on the dinner table, but these accolades come from the The Ultimate of the Food Cognoscenti himself...that's as good as sending Leonardo into the 4th level of my consciousness to plant an idea there.

So, you can imagine my excitement when Aly (I seem to talk alot about her these days huh) asked me to join the Red FM crew for a food review at Kuriya. I was beside myself with anticipation. Well, the thin guy in me screaming to come out would also like to have been beside myself, were it not trapped inside instead of beside. 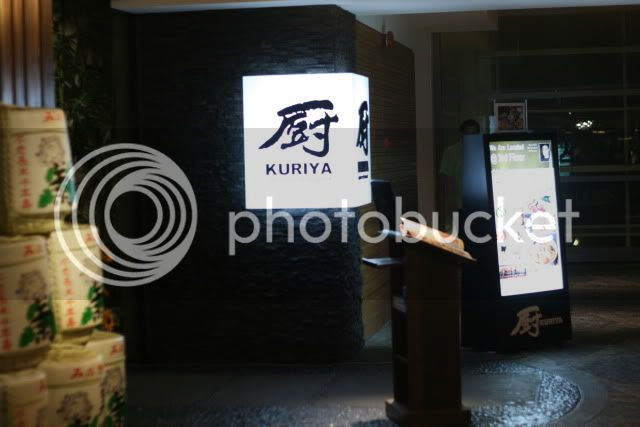 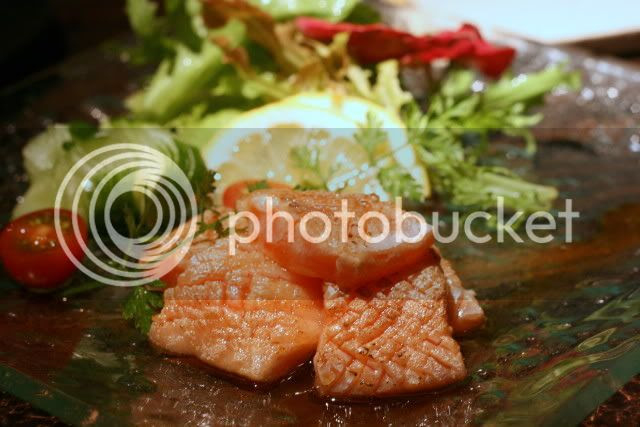 Now I did not know this until today, (my journalistic skills are about as good as my formula F1 driving skills), but Kuriya means aristocratic kitchen. The Salmon Belly Aburi was yummy, fresh and fatty salmon that melts in the mouth, married with a slightly tangy sauce. It's not entirely raw. The outsides are seared slightly. 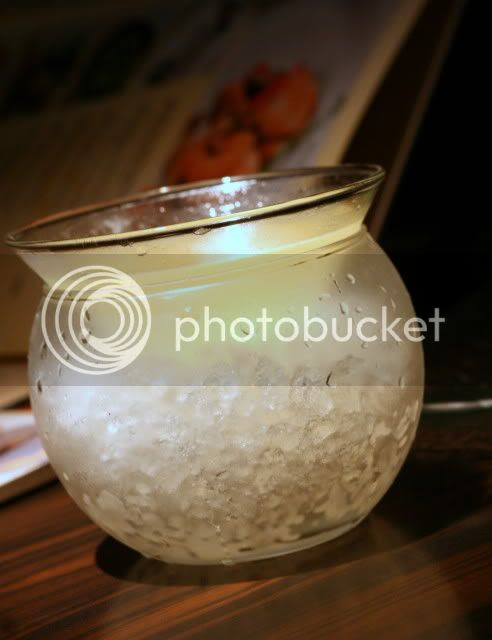 A sake margarita. Interesting, but I think I prefer the traditional tequila ones, despite having an aversion to Tequila. By the way, thanks Aly for the drink. Hope it didnt cost an arm and a leg. 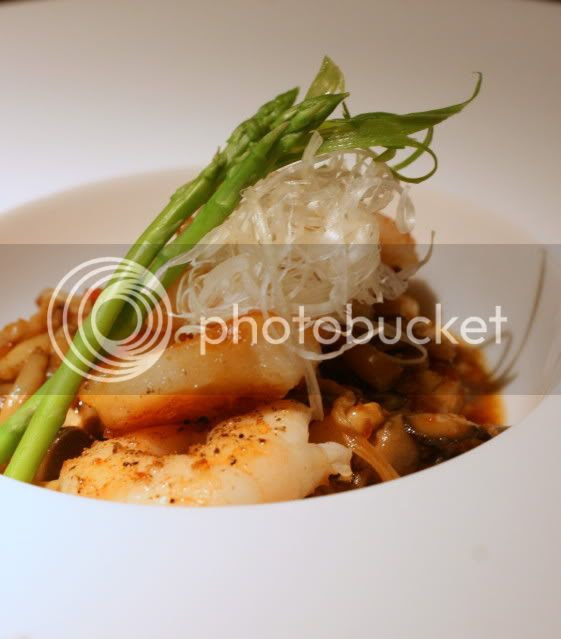 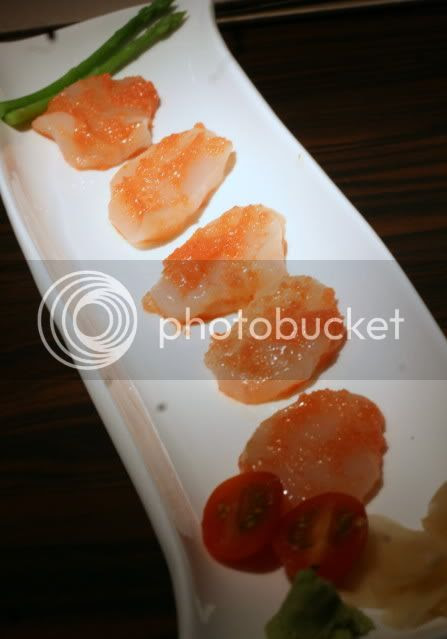 Hotate Mentai With Wasabi Mayo. Scallops, with roe and a lovely sauce with kick. The scallops were fresh, no complaints here. 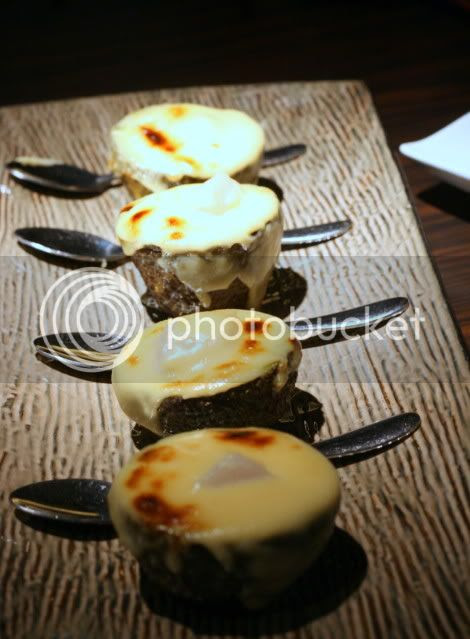 This has to be my favourite dish of the night. The Chef's Special, Avocado Kakushiyaki. Avocado halves gratinated with scallops within. Yummy. Scallops, cheese and avocado. Fabulous combination. 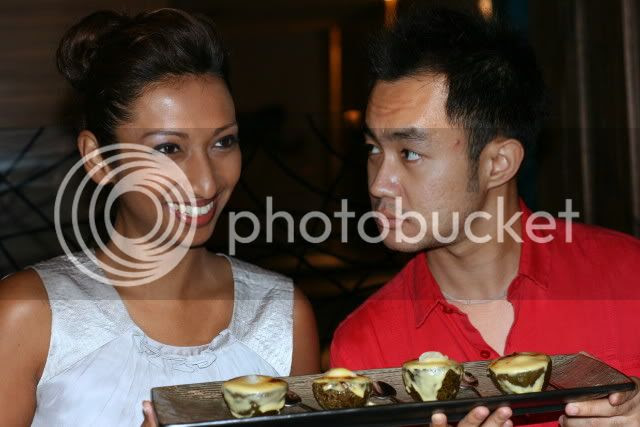 They might be smiling now, but they had to fight over the last piece. 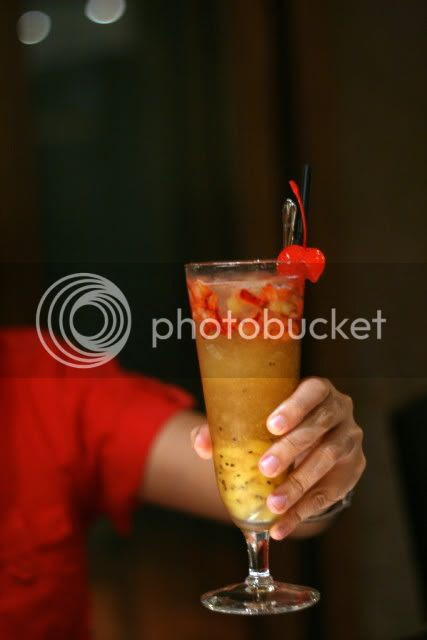 Terry's fruity drink...well, it was colorful. (FK, if you are reading this, this is for you) 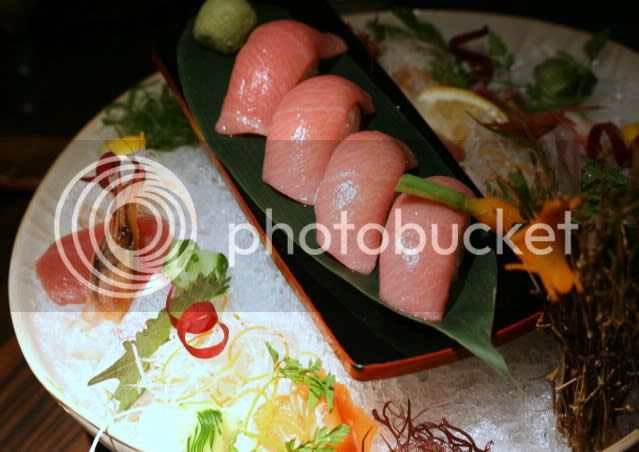 OOOH, I loved this as well. The assorted sashimi platter. Topped with Toro, and Hamachi, and raw prawns, (which I think Terry tried for the first time! Go you raw prawn virgin). The platter was exceedingly fresh. 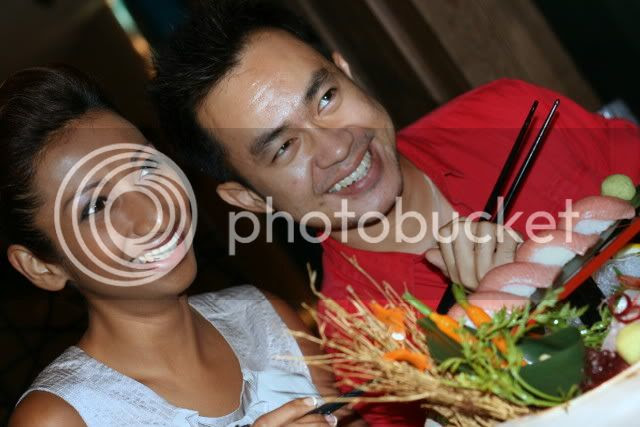 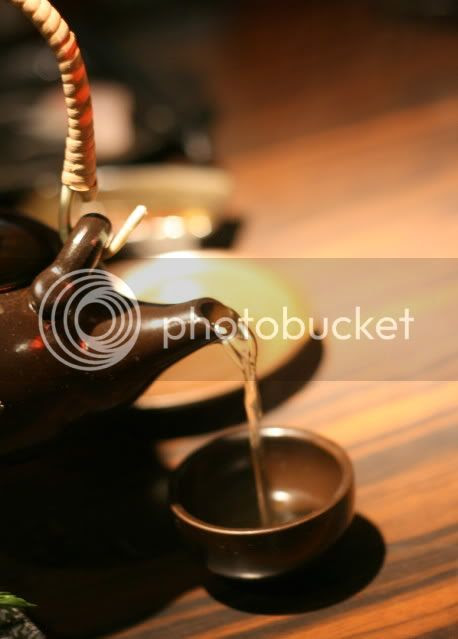 Dobin Mushi, a clear hearty broth, served in elegant teapots and a teeny weeny tea cup. Off hand, I'd say this method of serving is to ensure your soup doesn't get cold. 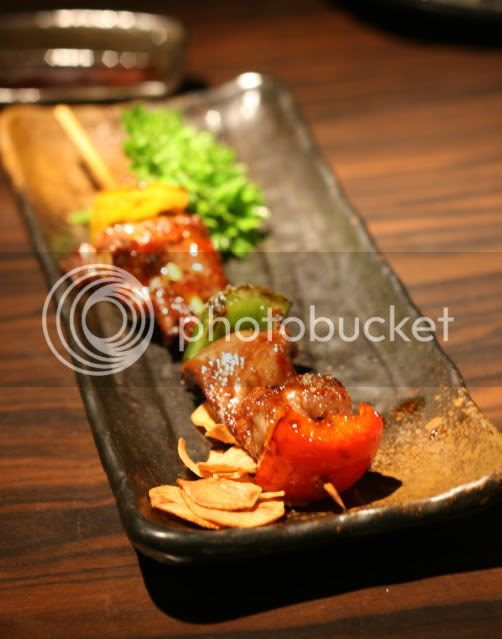 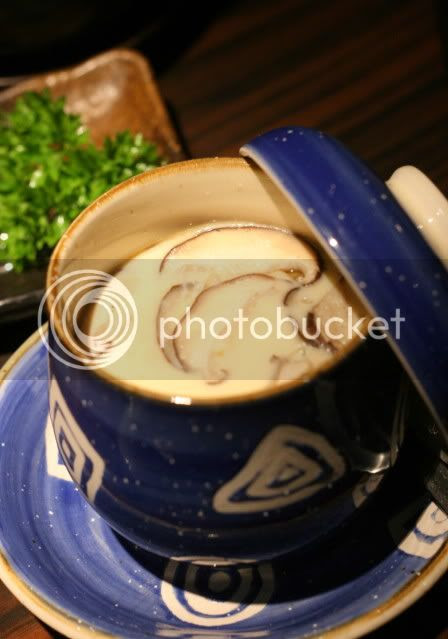 A well ingredient-ed (is there such a word?) Chawan Mushi. Smooth silky steamed egg, with lots of goodies lurking beneath. 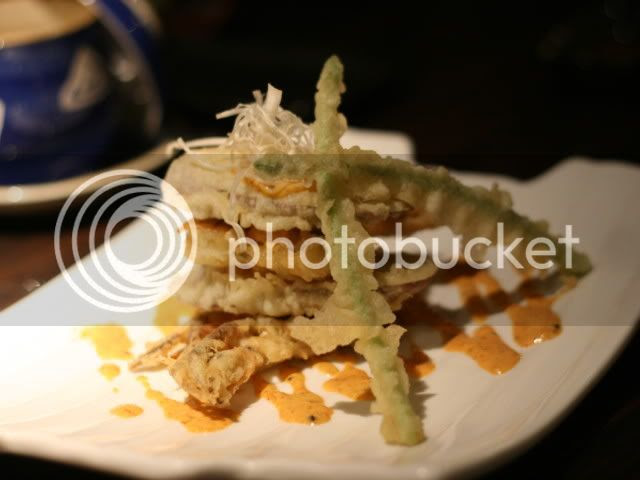 Soft Shell Crab Tempura. I love soft shell crabs, and I love tempura, because it's deep fried and unhealthy for you. So, this was good. 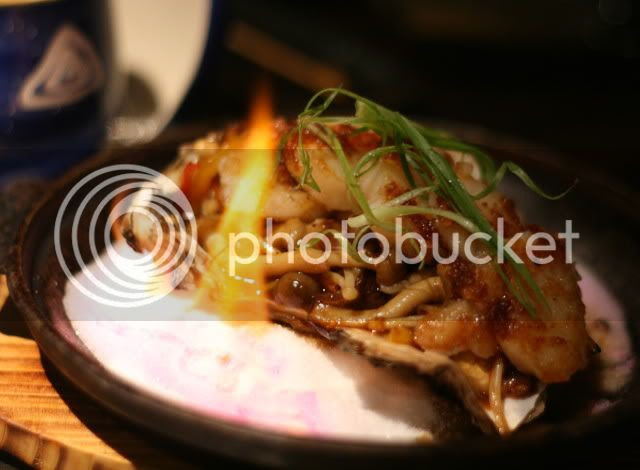 The dramatic flaming Toyota... like a flaming Lamborghini, but Japanese. I kid you. It's a Oyster Shell Flambe, and it's all about the presentation. However, I found the flames possibly rendered the scallops to be a bit overcooked and as a result were too tough. 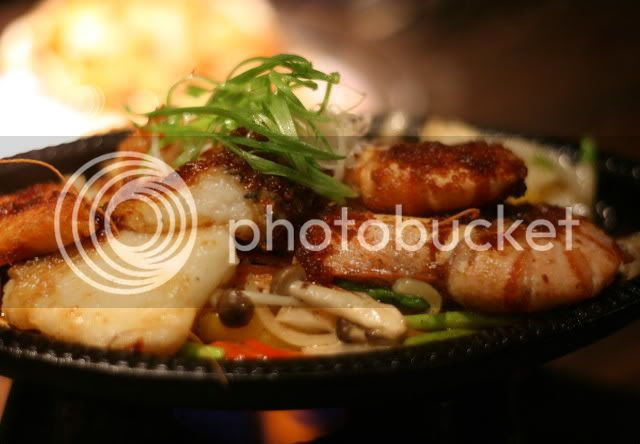 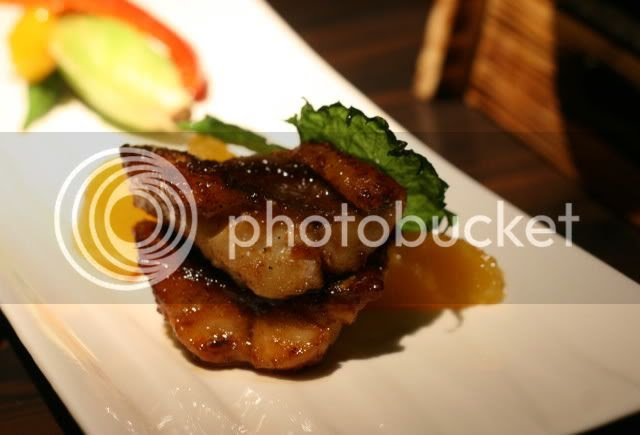 Another chef's special. A special fish, which none of us had heard of or seen before, called a Grunt Fish. A simple yet effective way of cooking, preserving the fish's sweetness without overpowering it in sauce. Exceedingly fresh. 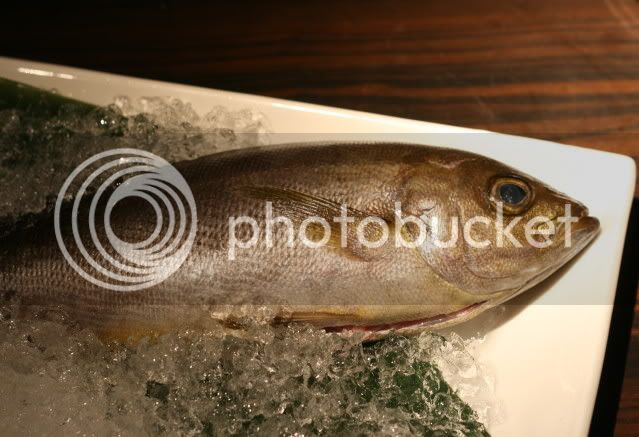 This is what the grunt fish looks like, lest you should need to identify one in a lineup.

Freshly pulled homemade Soba noodles. Actually, I had this childhood aversion to Cold Soba noodles, but this reversed my childhood experience, and I'm now a happy cold soba convert. 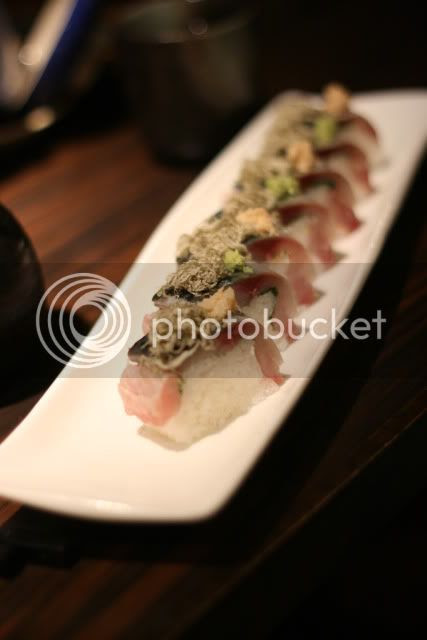 Mackerel Roll. Well, a bit on the fishy side, and probably an acquired taste. 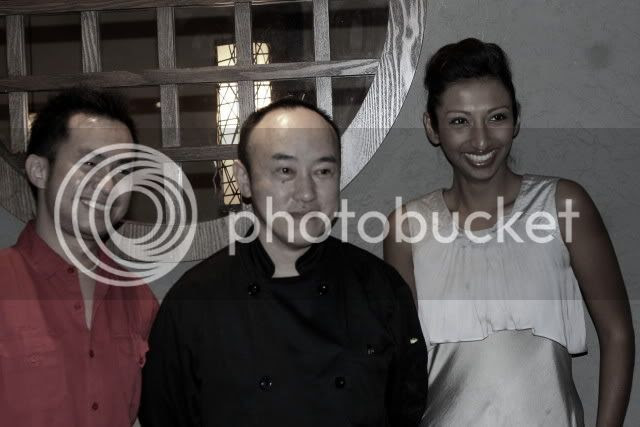 That was a rather comprehensive meal. Thanks again to Aly for the invite, and to the management of Kuriya for hosting us.

Kuriya is located on the 3rd floor of BSC's old wing, where Grand Imperial, LeMidi etc are.

Haha!Love that you slipped in - "hope the drink didn's cost an arm and a leg!" you forgot to say it's Singaporean kan. Great write up! thanks babe, looking forward to the next one...sashimi promotion comin up somewhere soon...

Kuriya - I kept thinking of squid and lo and behold, the Salmon Aburi looks like pieces of squid! But that's kurita hor? ^_^

Nice receptacle, the Sake Margarita. It is specifically for Japanese margarita? Where to buy ar? Would love to have a couple around - hate diluted drinks.

So the flaming toyota (:D) was a miss eh? The real one ain't faring too well too, with so many recalls. I'm switching to Honda next. Although the Hyundais have been coming with some spiffy designs. The other day I mistook the new Cayenne for a *gasp* Hyundai!!

Fuyoh.. new word of the day. Cognoscenti.. No wonder you is the Lexulous champion.. :D

eeeks! i can't remember having written that hyperbole about kuriya, but it looks like i did!
can i please admit now that i was totally wrong? it's not one of the best or busiest in bangsar at all. hindsight is 20/20, heheh... :D

The pics looks fab!! What happened to the bokeh shots??

Fwoargh! Romanji Jap would be so amazing to play on Scrabble! We should totally do that, with a bottle or two... it'll be a riot!

Wow! Everything looks yummy :)
Fact: I don't like Japanese food ; the idea of raw seafood scares me!

wahhh.. so good one ar? get invited to all the classy joints but aly :P better come kombat MORE.. work that booty:P

ahmei, hah, you're a fine one to talk. classy joints...you da princess of classy joints. (sorryla, cant bestow you queenship, that's been taken).

kiran, not everything is raw though...

minchow, yes, i can imagine wat fun that'll be. considering i know all of one jap word. kikoman.

nips, what tok you? still got the blur wat.

gfad, heheh, glad you got the flaming toyota. i have seen those receptacles in many restaurants la.

aly, oooh sashimi did you say!

Ooh nice colour in the last pic - so desaturated and smart chic (for the two DJs and the chef).

And thanks to your blog post, I can now identify a grunt fish in a line-up accurately, if the need ever arises. :P