To the uninformed illiterate like me, Midi is probably something in between a Mini and a Maxi. I think those were names of dressing styles when I was growing up. If I recall, it also refers to the size of a beer glass, in Australia, where words rarely exceed two syllables, and if they did, are truncated to two. A certain number of midis would put you above the breathalyser limit.

However, LeMidi doesn't refer to anything quite so frivolous, but actually a geographical region in Southern France that covers the Pyrenes to the Ryon Alps. If you dont believe me, check out the Wikipedia entry HERE.

Again, I had already read about it on the definitive KL fine dining blog, EatDrinkKL, and with an intro like "Le Midi opened on 10/10/10, instantly becoming BSC's most romantic restaurant", I was rather chuffed to get an invite from Dinesh of BRDB to dine at Le Midi. Not because of the romantic aspect, I have about as much romantic inclination in me as a balitong, but because of the stunning review by Sean...and if HE says it's good, well....

This display of live jellyfish I have to say is MESMERIZING. Melissa has spared no expense to make Le Midi a place with one of the most gorgeous ID amongst all the outlets in BSC as can be seen with this unique display of Cnidaria...very alienlike, I could almost feel them trying to communicate. "Greetings greedy earthling, don't mind us as we observe your feeding habits" 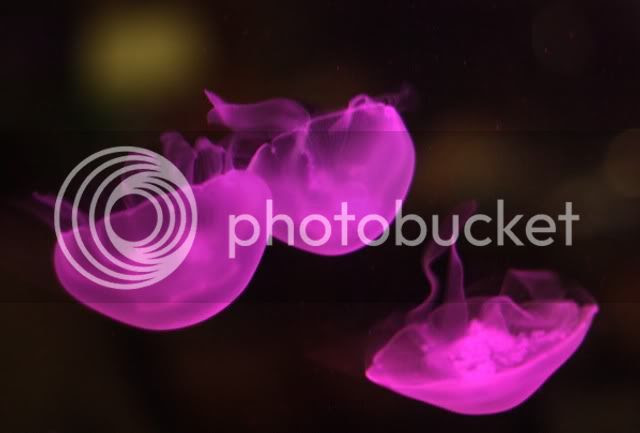 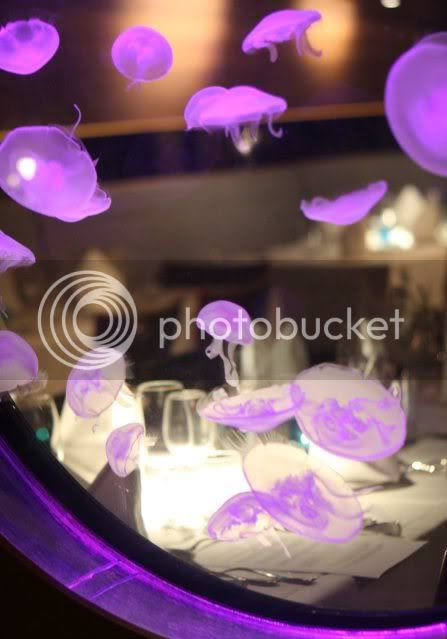 Obviously the aliens hadn't landed yet when Sean was there, since he made no reference to it.

The classy interior of Le Midi makes it an ideal place for an exclusive party, and the little lounge area is perfect for small groups to chill, while admiring a stunning KLCC view. 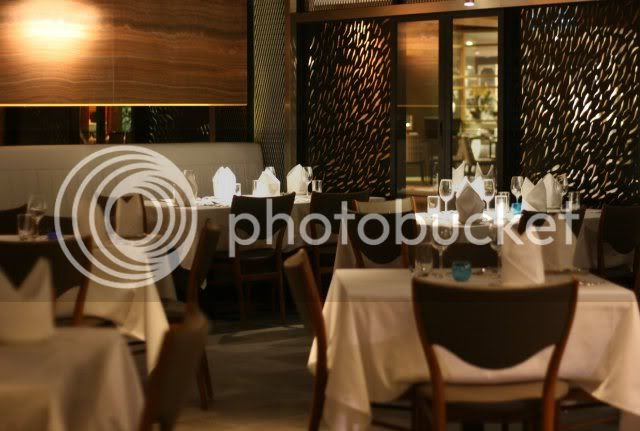 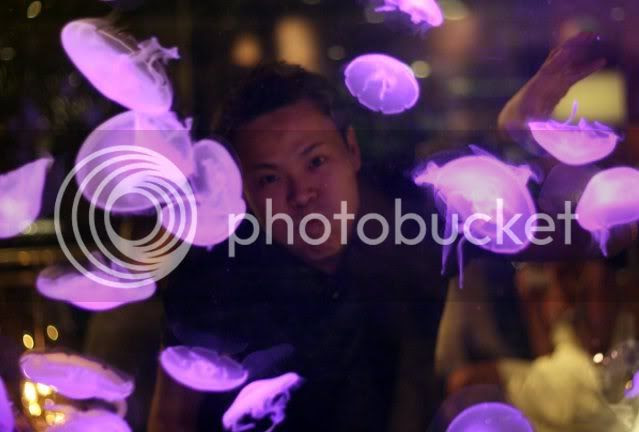 The Monkey swims amongst the Medusae...Shall we just call it the Sea Monkey 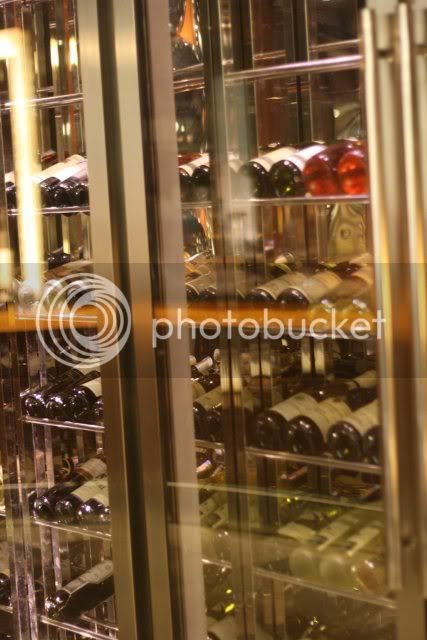 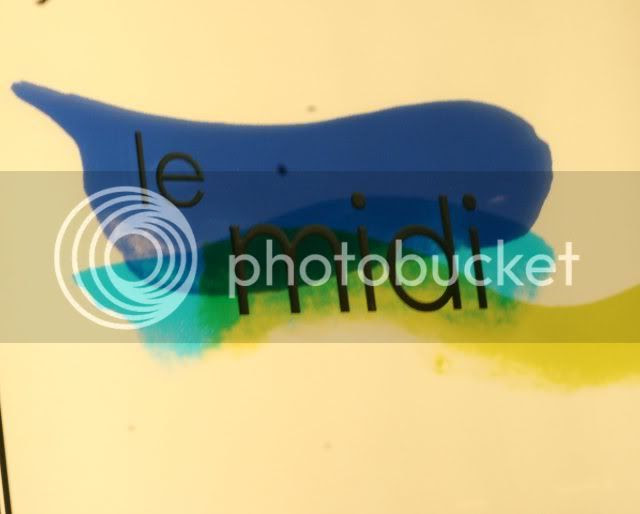 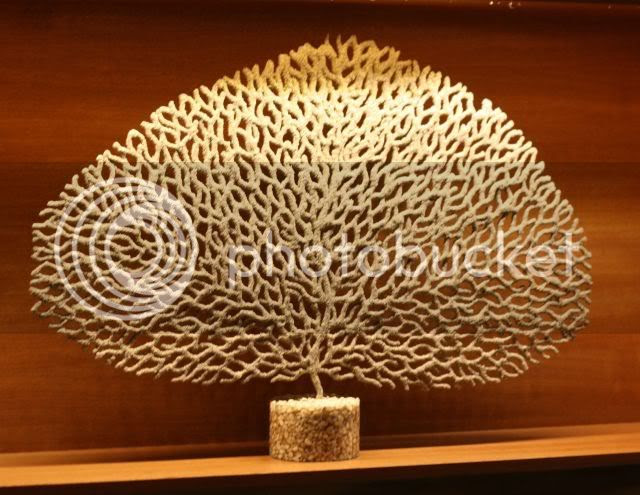 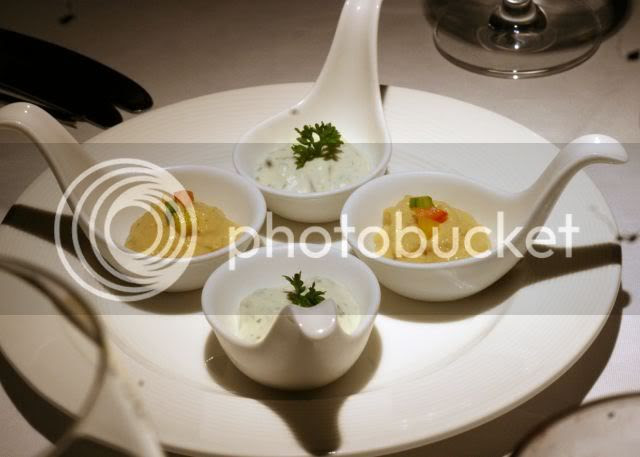 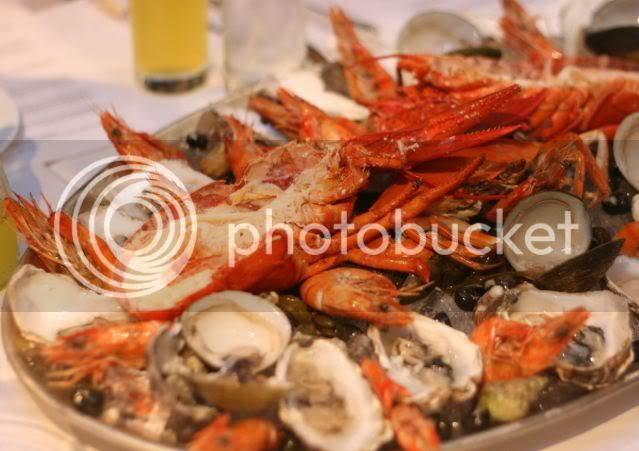 Seafood Platter, or Fruit de mer Frutti di Mare. Yes, it tastes as good as it looks. Super fresh seafood, from the Aegean to the Altantic, and even from our local shores. Amazingly fresh lobster from the Mediterranean, plump, juicy oysters that make those from the buffet lines taste like erasers in comparison. Fresh and flavourful clams, that look like Lala on steroids, but oh so good. And the tinier shells, I forget what they're called, but reminiscent of our Balitongs, and so delicate. 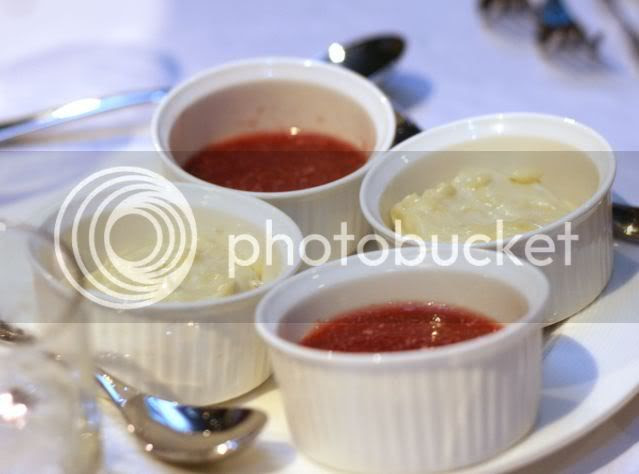 An array of chilli sauce and the most wonderful homemade mayonnaise accompany this mouthwatering bonanza of sea creatures. The only thing missing from this platter was possibly the Little Mermaid, but she's from the Baltic Sea I believe. 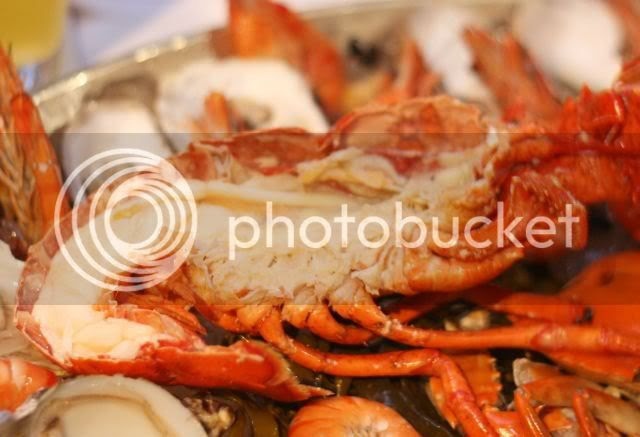 I swear you could still taste the brine of the Mediterranean in the lobster. It was THAT fresh. 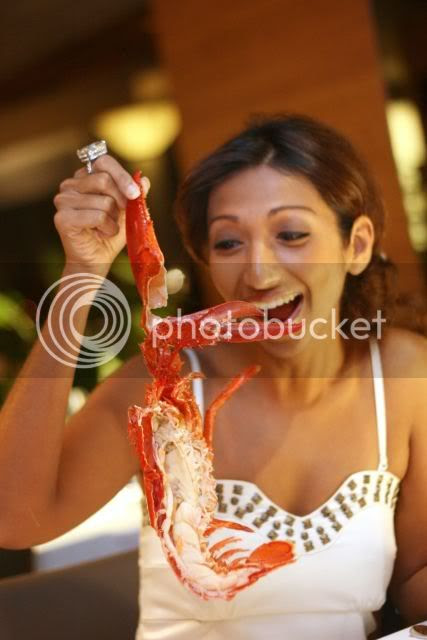 Lobsters are great to play with, especially when they're dead. 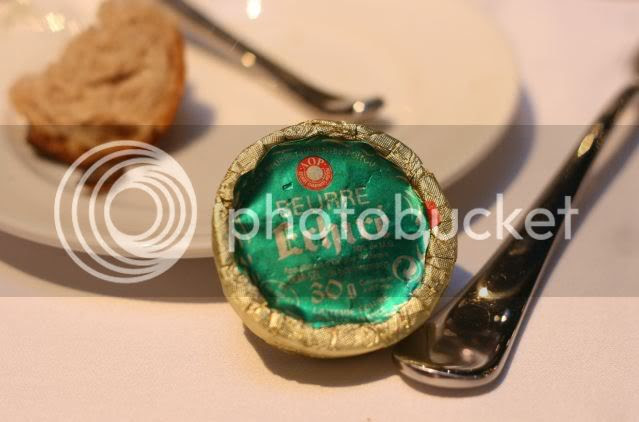 Another of life's little luxury, Echire butter that made Monkey smile like a Cheshire cat. How does one go back to eating normal butter after this creamy luxury? And the worst thing is, you can't really buy them off the supermarket shelves here. 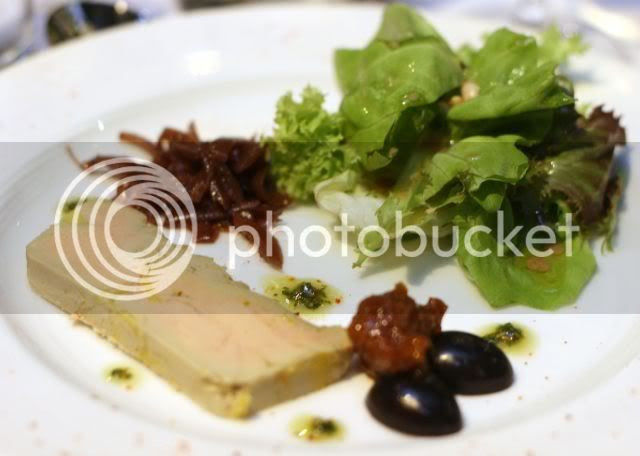 Foie Gras pate. Smooth, silk and rich, melt in the mouth pate. Fabulous stuff, paired with the Marque De Riscal Sauvignon, a Rueda region wine, that has a floral aroma and lightens the entire experience in what could be otherwise quite heavy. 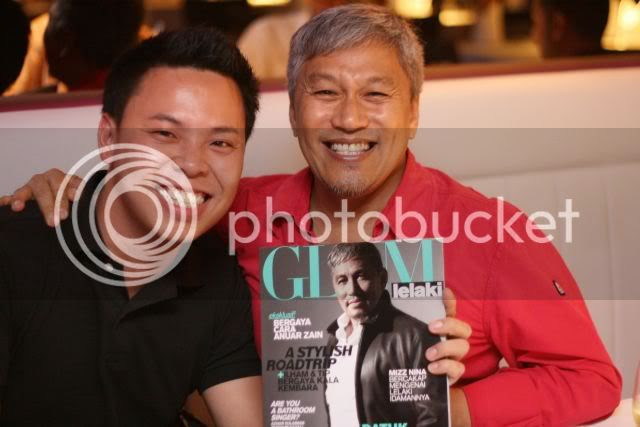 An unexpected encounter with local celebrity Chef, who needs no introduction. Our LilFatMonkey is friends with him, so we managed to hob nob a bit. 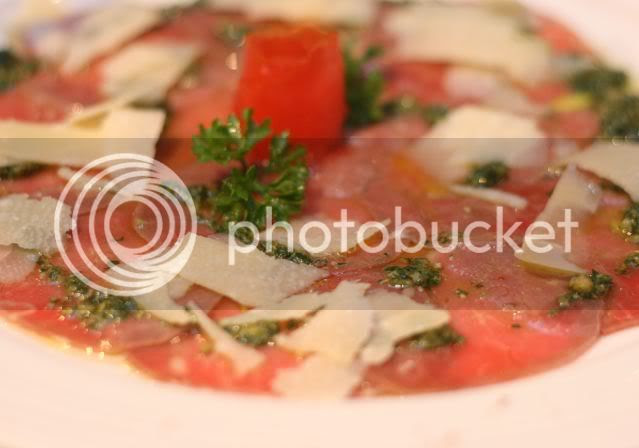 Carpaccio, apparently named after the Venetian Painter from 1930s at Harry's Bar. Raw beef, sliced to microscopicly thin slices, that just melt in the mouth. 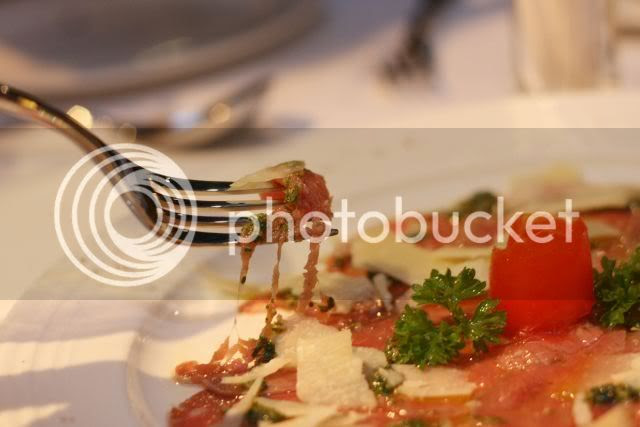 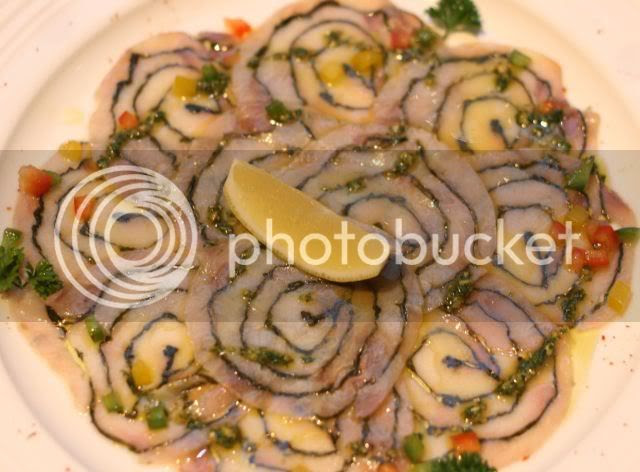 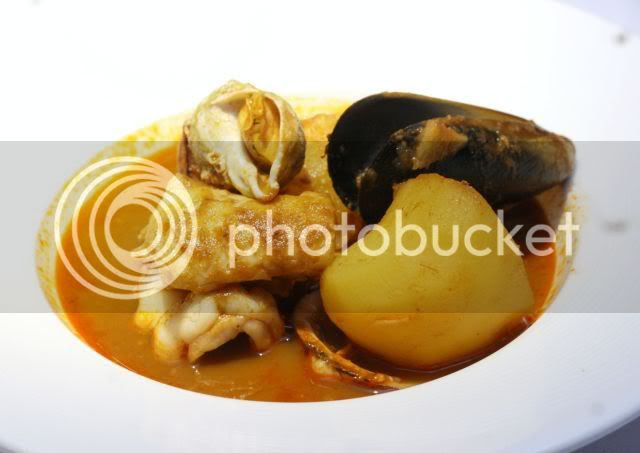 Bouillabaisse, originally a fisherman's dish from leftover seafood scraps, it has risen from its humble beginnings to become quite the gourmet's broth. The soup is like a thick bisque, full of marine flavours, and screams out for more bread with that lovely Echire butter. Except we were quite full by the time this dish arrived. 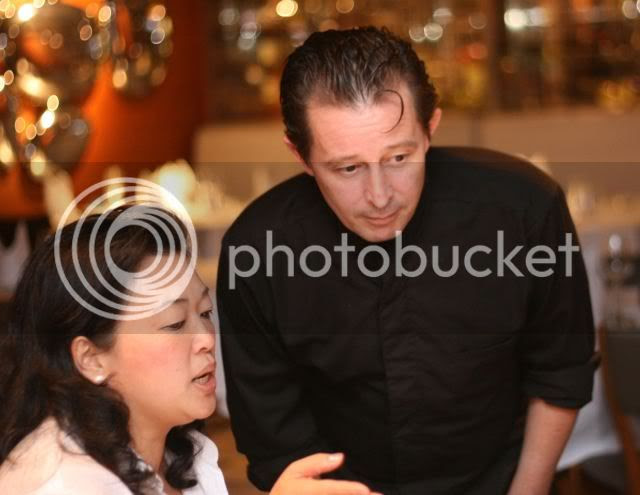 The lady Melissa herself, the epitome of elegance and grace, having a tete a tete with her Chef. 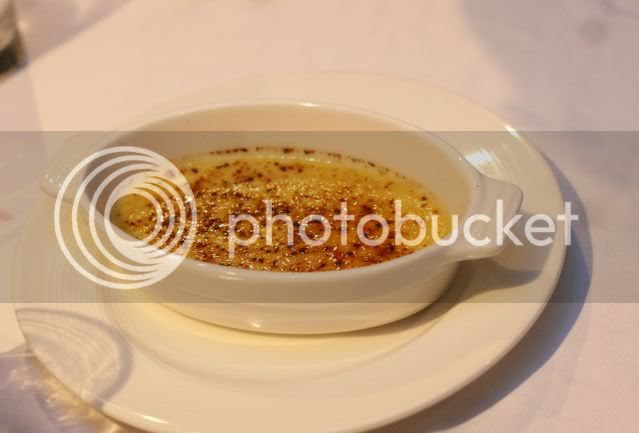 A lovely creme brulee, infused with that fabulous aroma of orange blossom. Possibly one of the best creme brulees I've had east of the Suez canal. 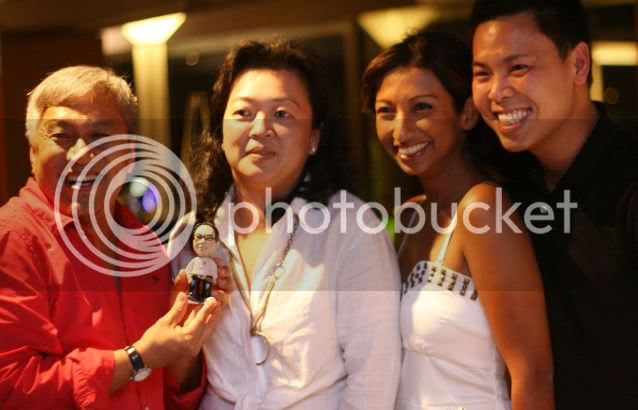 More people grabbing the opportunity to pose with the celebrity. 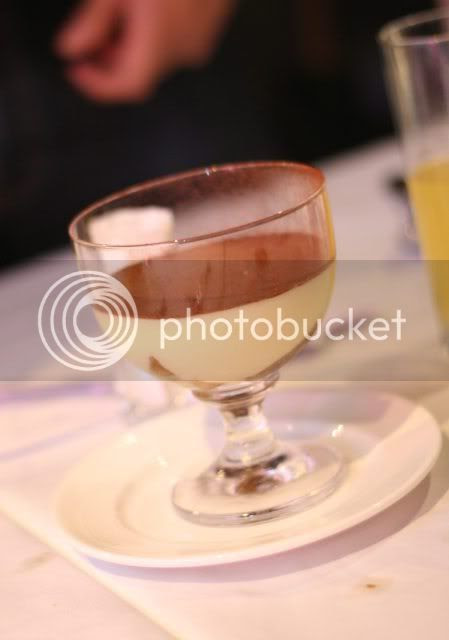 Traditional Tiramisu. Generous dousing of alcohol with the sponge at the bottom. Good old traditional fare. 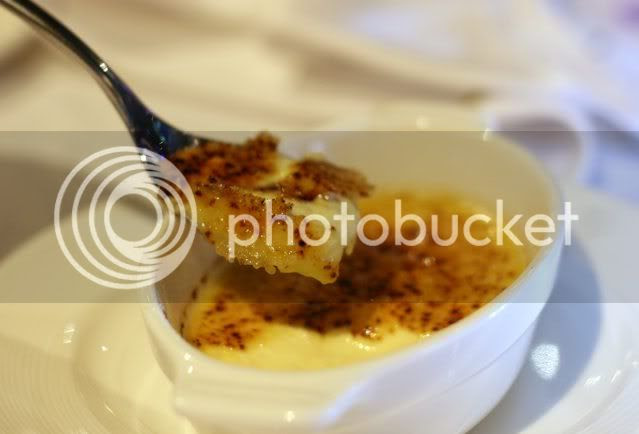 Le Midi offers a wide variety of wines to pair with their extensive menu.

Well, fabulous ambience, stunning views of the city, great food, fairly easy parking... if they can maintain their quality and consistency, I have no doubt this restaurant will become the one of the more popular fine dining outlets in the area.

A special thanks to Melissa for hosting us, and to Dinesh of BRDB for inviting us. Hope to be back soon.

Le Midi is open daily, and closes late at night, for the party people.

Posted by fatboybakes at 9:46 AM

ooh, i hadn't noticed those jellyfish! any chance they'd be on the menu too (by request perhaps)? :D

Playing with lobsters? Didn't ya mama evah teach you not to play with your food? lol

Wahh Frat so femes oredi, even celeb chef can't hv enuff of him?

I like the shots of the jellyfish! Looks very coooool.

Mini, Midi, Maxi.. hahahahah. Bet most of your (young) readers don't even know what you are tokking about.

Eh, wot happened to our Dato Chef? All grey now?? He was still black when we met at AD last year. He looks great on the mag cover. :)

Food looks good. I have orange blossom water which I don't know what to do with. Maybe I should attempt my first creme brulee.

BSC is bcoming the place to be hor, have they fixed the carpark system though? i shudder at the thoughts of having been stuck in the carpark for half an hour on a public holiday.

those jellyfish seems delicious.. u sure that they don't serve it in their menu??? I'm craving for some right now

those jellyfish are so so so cute!!

O-M-G! Y-U-M! Everything sounds fab until you got to the tiramisu. Oh well... Can I interest you in having lunch at Le midi with me next week??

So clever to have jelly fish in there. I will make a trip just for that alone. And I hope they play COCTEAU TWINS music to go with the hypnotic jelly fish ooophs ambient

Now, let me see when my review will be up. Hahahaha. Let me see if I can beat Aly and BFF to the punchline

Love food! And the jellyfish, I have seen before in some underwater world park. It's gorgeous, isn't it! Makes the dining environment so much more classy!

ya lar.. totally no alien lifeforms when we were there! LOL Would have LOVED to see those!

Jellyfish - gotta get some for my aquarium too. Wait. Gotta get an aquarium first, right? :P