Ghee Biscuits - The Latest In My Series of Weird Cravings

I've been having some strange culinary cravings lately. On Monday, I craved a Macdonald's apple pie. Something about that deep fried goodness and crunchy apple that draws me to it like a camel to an oasis. Then yesterday, through some very bad inceptionizing by fellow twitters, GFAD posted a link to LARD COOKIES WITH DULCE DELECHE ICE CREAM. Since lard is out of the question, I thought of my tin of QBB Ghee that has been sitting pretty on the larder shelf, and thought, hmm, I should make ghee biscuits with Salty Caramel Ice Cream instead. By the way, I am not pregnant. I might look it, around 5 - 6 months, but I can assure you, its just a cute little fart. 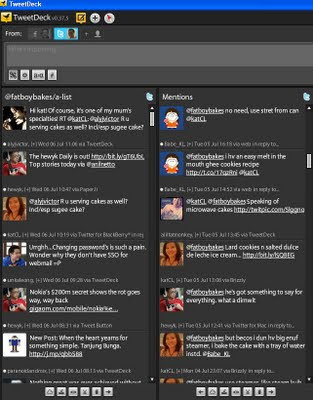 Anyway, Babe In the City KL promptly directed me to one of her recipes for easy Ghee Cookies. Yay, I thought. Easy. I like. Happy as a lark, I open the tin of ghee, the bovine smell that would probably cause my late grandmother to vomit, (sou, as they call it) hit the nostrils like a Spartan sword digs their nose. As always, being a very bad student, I always never read thee exam questions, or in case, the recipe, properly. Suddenly, I see that the sugar has to be MILLED! Who mills anything in this day and age? Luckily I have one of these handy at home. 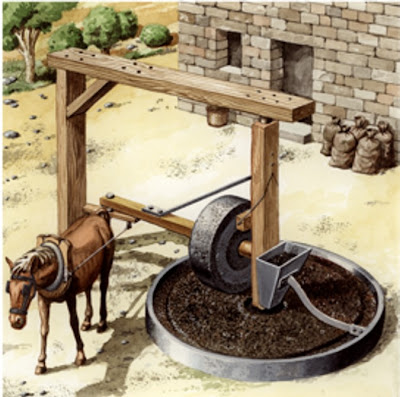 Moral of the story, always keep your ass handy, you never know when you might need it to mill some sugar. 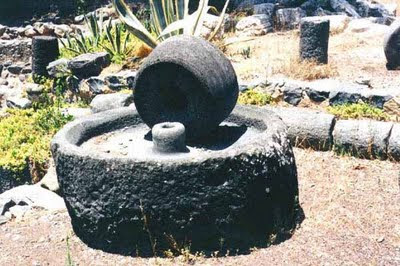 Thank goodness we have the automatic version of the miller with the ass, imagine, in my greatgrandmother's time, they had to use this manual one, with no horsepower. Or asspower. 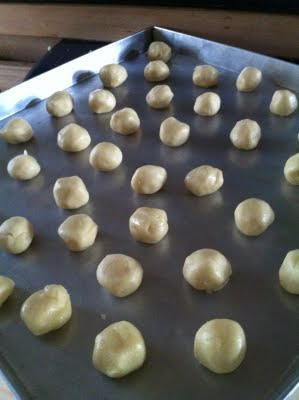 There's something very gratifying about rolling balls, especially greasy ones. I am a ghee biscuit virgin, so I was not very delicate in handling them. With all gluten, too much kneading produces a tough cookie, unlike humans, when too much needing makes one soft. [when I shared this with Awhiffoflemongrass, she said, ah, I see a blog post coming].

Incidentally, milled castor sugar has the texture of what I imagine coke would look like....or a more child friendly example, icing sugar. But you cant use icing sugar, according to BabeKL because it contains cornstarch which makes your balls hard. 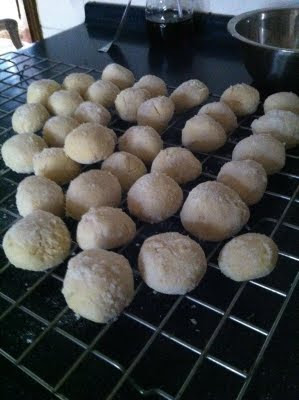 Ah, my first attempt at Ghee Biscuits. I have to say, they weren't bad at all. Rather melt in the mouth, goes well with a hot mug of black coffee, no sugar.

Thanks BabeKL for the recipe. I shall attempt it again with a lighter touch on the balls for a more melt in the mouth experience.
Posted by fatboybakes at 11:56 AM

Hi Fatboy,
My name is Richmond and I'm currently interested in starting a Melbourne concept coffee house/lifestyle cafe and would like to advertise on various FnB blogs. I would like to know your advertising rates for the adds on this blog(head banner & small ones at the side), and the rates if you were to review my cafe.
Please get back to me via email at richmondyau@gmail.com .
Thank you for your time.

What a world of difference from your previous post. Like a comedy interrupted by a death announcement of someone important on TV.. ^_^

Your balls do look rather scrumptious, a bit irregular in shape, but hey, whose aren't?

You really short of pixes hor? Have to resort to screenshot of your tweetdeck, various mills and asses. I'm surprised you din put in a pix of coke... Next time, can include shots of ingredients and various stages of milling, mixing and rolling. And maybe a red ribbon around the cookies... :D

I'm an expert on eating ghee balls. Would you like my services in ascertaining if they are up to the mark?
So...what did you use to mill the sugar? I tell you lah....around the bush and back from the mountain and still no answers.

But you cant use icing sugar, according to BabeKL because it ... makes your balls hard.

How'd she know that?

I didnt inceptionise anything that day.. other than choco cake recipe.. but I can email you the one min sent me, very easy to make, nak?

Wah got invite for review in Melbourne some more :P Femmes di ;) The balls look plump and delicious!

omgomgomg, i miss your baking posts lahhhh.....hilarious! yeah yeah, i agree that hard balls are no good, usually a sign of something bad. good job, fbb! :)

hairyberry, i know hor, i've sold my soul... i shall endeavour to do more baking posts...as was my original calling. i have been lured by the evils of food reviews...

unka, what invited to melbourne? who? your ex ah?

cuddly, thanks for the recipe..cant wait to try it out.

richard cranium, hahah, you gotta ask her how she knows that.

KY, you gotta use your hands to knead them oily balls you know...better ask haze la hor..

dei, thamby, i told you mah, i used a donkey to mill the sugar...life is tough, got to feed the ass some more...

are u calling this post a death announcement, gfad??? chis...