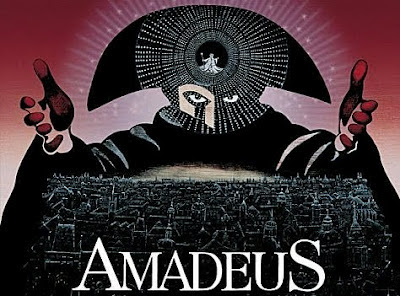 Oops, wrong picture. Though admittedly, the name was popularized by the movie, or seriously, how many people would have known that Wolfgang's middle name was Amadeus.

I speak of the latest place in town, at KL Life Centre, actually, this trendy cafe, with good food and wine from that fancy enomatic machine. Enomatic produces a wine serving system that allows you to dispense wine, one glass at a time. That way, it's like having a new bottle of wine, opened just for you, each and every time. So in effect you have a wider variety of wine you can choose by the glass, rather than the typical house wine by glass that most places have.

I love the ambience here, it's casual, yet tastefully done, and has a well stocked bar, AND I noticed, Guinness on tap. You can see the pictures of the Enomatic Machine, and the bottles of wine nestled in the contraption. Basically it pumps Nitrogen into the opened bottles, preserving it's freshness (coz Oxygen is wine's enemy, whereas Nitrogen is a friend).

I am a sucker for poached eggs, and few things thrill me more than seeing a runny yolk spurt of out its casing, the way lava oozes out from a crater. And I love asparagus, so despite the wide variety of starters, I chose asparagus with poached egg (RM19), which I know, to some sounds boring.

Ah, the runny yolk that I love so much.

Lamb meatballs RM 19 (herbed lamb meatballs with green peas in a light tomato sauce). Not really a lamb fan or of their balls.

Stuffed Mushrooms RM 18 (button mushrooms stuffed with herbed fresh cheese, served with home made chili sauce). A good finger food, but misleadingly filling. (as in, they don't look a lot, but can be very filling).

Smoked Duck Salad RM 16
(smoked duck breast on a bed of mixed lettuce and light vinaigrette dressing). Very good value salad for this price, and actually, for the healthy, this is a meal on its own.

Pan Seared Scallops on Cauliflower Puree (RM24). Scallops were seared just right, though I could do without the cauliflower puree.

Duck Terrine RM 21(duck terrine layered with flavorful stuffing and pistachio nuts, served with a slice of home made bread and pickles). Such an attractive dish, and the pickles were good!

Turkey Sausage RM 32(home made turkey sausage, served with grilled Mediterranean vegetables). For a sausage that comes from a bird with relatively low fat content, I have to say these turkey sausages are exceedingly flavourful and moist, and do not taste lean.

Penne Alla Vodka RM 26(a creamy flavorful tomato sauce flambéed with a dash of vodka. Probably desensitized by all that wine, I swear I could not tell there was a dash of vodka in this dish at all.

Chicken Roulade RM 38(chicken roll stuffed with asparagus and mushroom mix, served with mashed potato and French beans. You know, being of typical Malaysian chinese upbringing, we always mentally dismiss chicken as a "cheap" dish, especially in western restaurants, as they are synonymous with Hainanese chicken chop, that kind of thing, and are usually priced half that of say, beef. So, at first glance, RM38 for a chicken dish sounds exorbitant, in relation to say, a lamb stew. But actually, the dish was very palatable, and actually would be something I would eat repeatedly. Also, it gives the simple chicken some added dimension and layering.

Duck Confit, RM42. This was my dish. No complaints, the meat was tender and moist, and falling off the bone.

And finally, dessert...lemon cheesecake, lemon tart and creme brulee. I loved the creme brulee, and finished every last drop.

Actually, the cakes were above expectation. The red velvet was moist, and not overly sweet, and had just the right amount of cream cheese. I loved the complexity yet simplicity of the Italian Cream cake, with the slight crunch of almonds in the cake itself, and the fresh cream. The sachertorte, which most found dry, is apparently meant to be dry-ish, so might not bode well with our moist local palates. Now, it might be an urban myth, but apparently Caucasians produce more saliva, hence their breads, and now apparently cakes, are drier than those in Asia. I swear I heard this somewhere, I can't remember where.

Our delectable company for the night, hosted by the lovely lovely Dina Djumic, who we previously met at Dubrovnik Restaurant.

Amadeus is at
M-03 Life Centre

And thanks to Ciki for the invitation.

I love the seared scallops. they were brilliantly done. and the duck...oh yumms.

next time i'm gonna pour my own wine...press my own wine...whatever...i will operating the dispenser myself >.< only if Dina agrees...

Great shots, FBB - your new camera is sehr gut!! Ahhh...now i know who finished all the creme brulee... coz i didn't get to eat any! :-P

wow. looks delicious and i'm pretty sure they are...

eh, eggs need to be eaten in pairs la...to maintain harmony and balance!

ciki teh, so sarky. chis.

mr flabbyless, yalor, dunno why they so stingy with the eggs hor, i oso agree eggs should come in pairs.

pureglutton, heh heh, i finished the creme brulee on MY side of the table ler...your side got your own wattt, chis.

Tt's a new one, the one about white ppl salivating more! Love ur cakes btw, just by looks alone.