I remember distinctly the hype surrounding the opening of Ippudo back in the day, in Pavilion, where the queues to get in at lunch time were mile long.  Anyway, since then, I have eaten at the Pavilion and Bangsar Shopping Centre outlets several times, and I have no complaints ... apart from the fact that honestly, it is a bit pricey.  But then again, if you're dining in Pavilion or BSC, you'd hardly expect to be paying kopitiam prices.

Recently, well, about a month ago, (apologies to the organisers, I have been abroad, hence the delay), they launched their new 2015 Grand Menu (so it is still 2015 I guess). 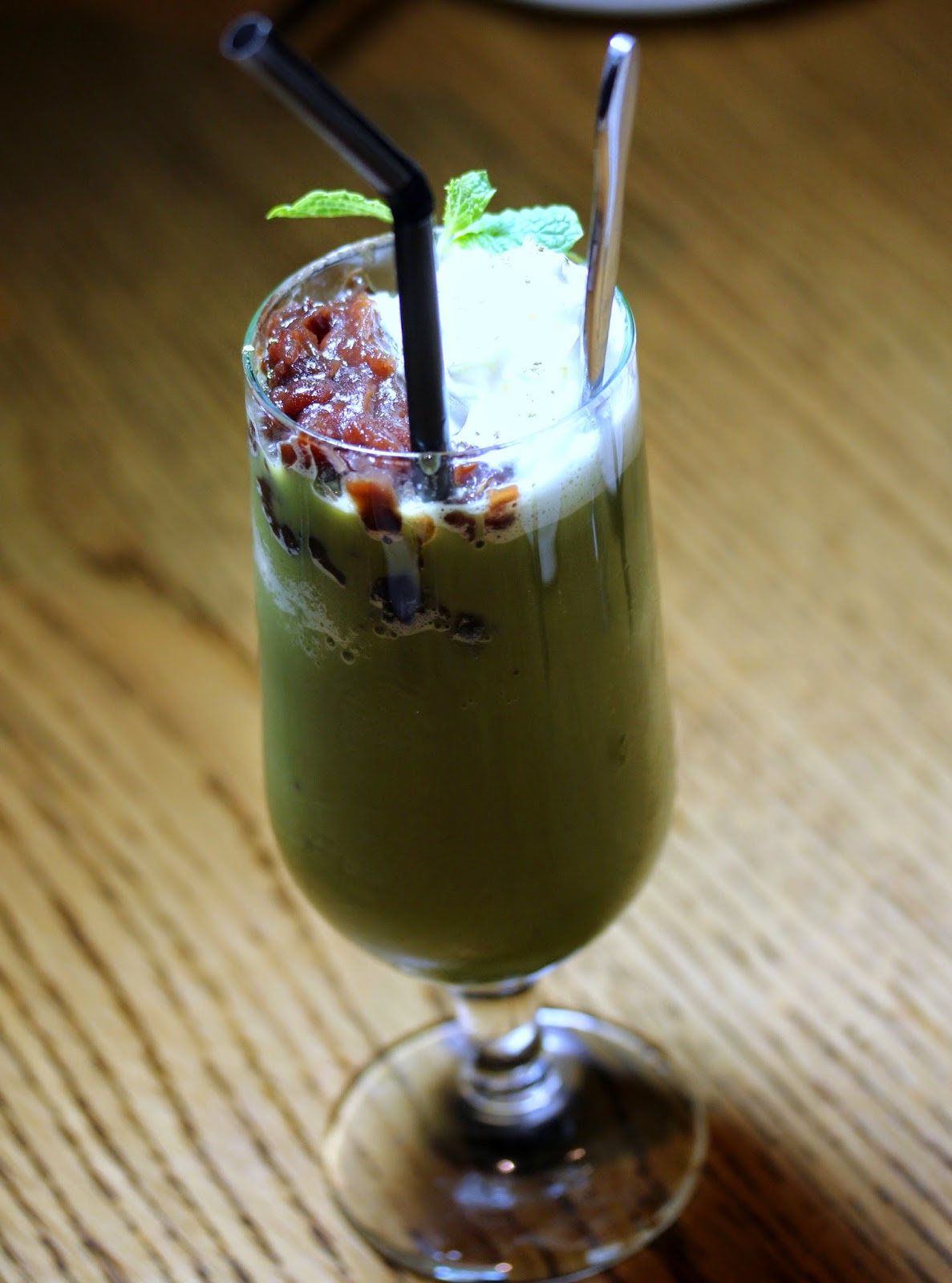 These drinks were ordered by my table comrades, which looked far too thick and filling for me.  A matcha and azuki  smoothie thingie, and the one below,  a yakult jelly smoothie.  All of which would have rendered me too full to eat anything else, because... #iamsoslim #delusional 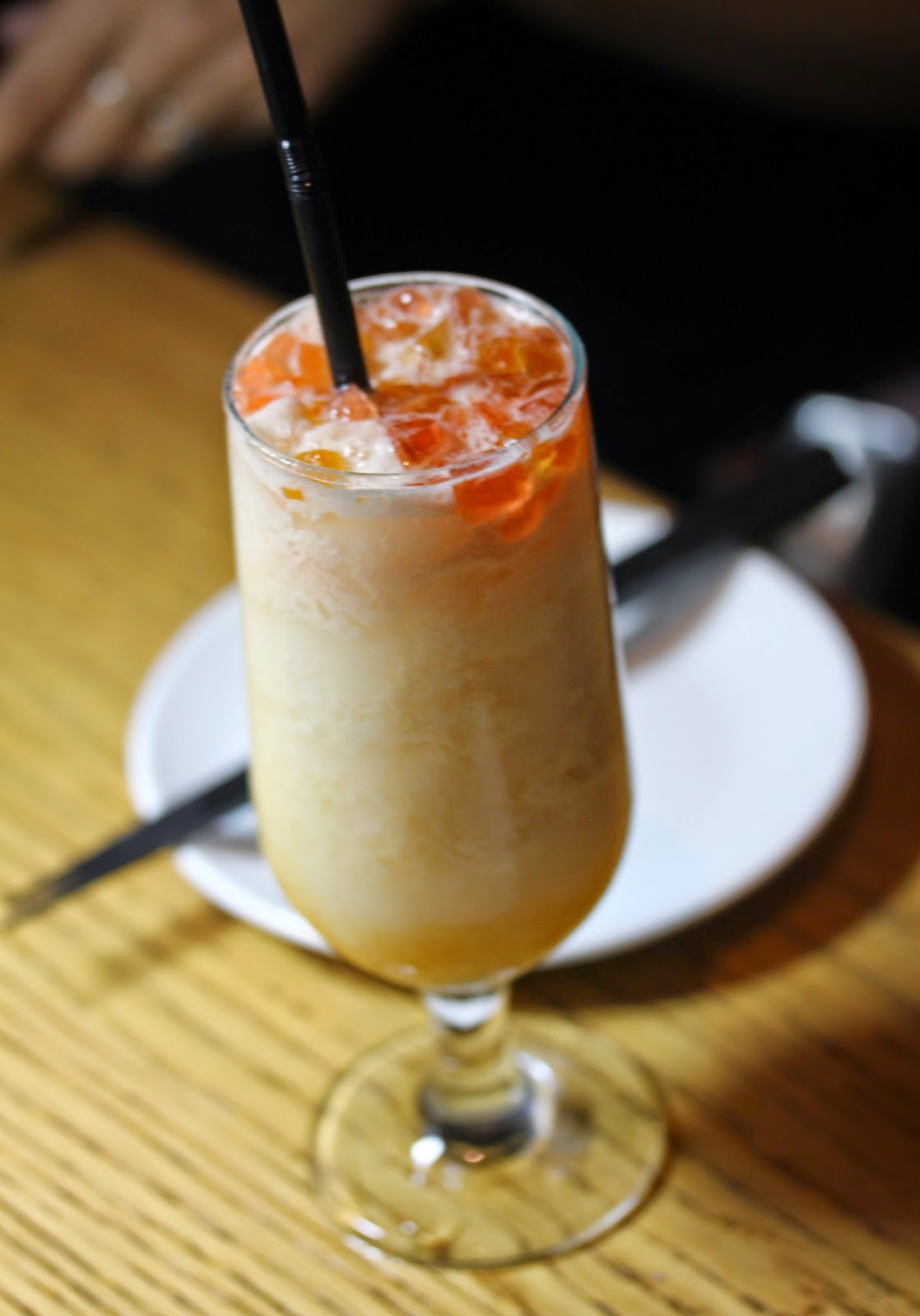 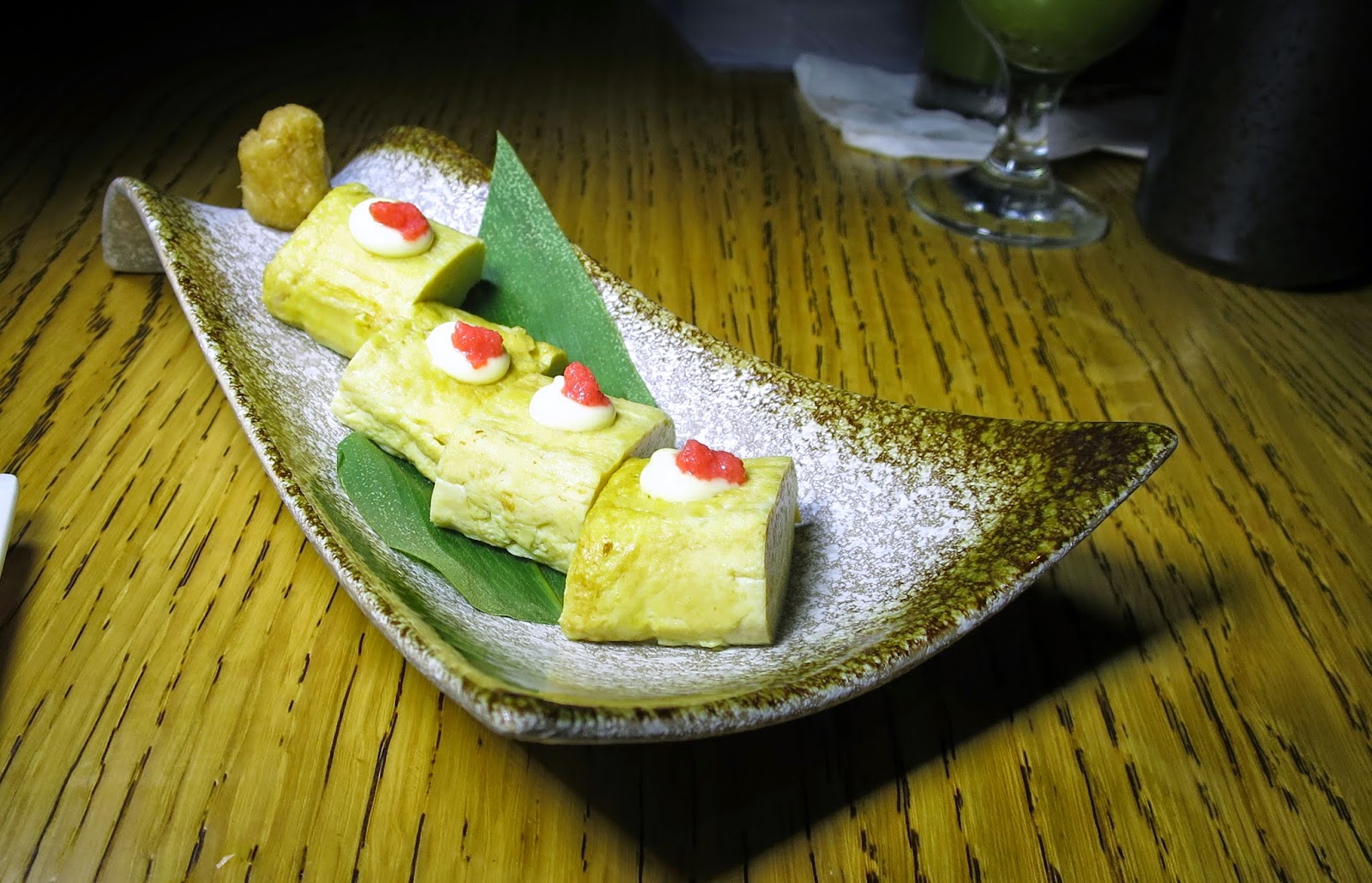 To start with, the Dashimaki Egg Roll, or nicknamed by me, Dashyat Maki... Basically well, it was a fat omelette, but since I love eggs, by extrapolation, I loved this. 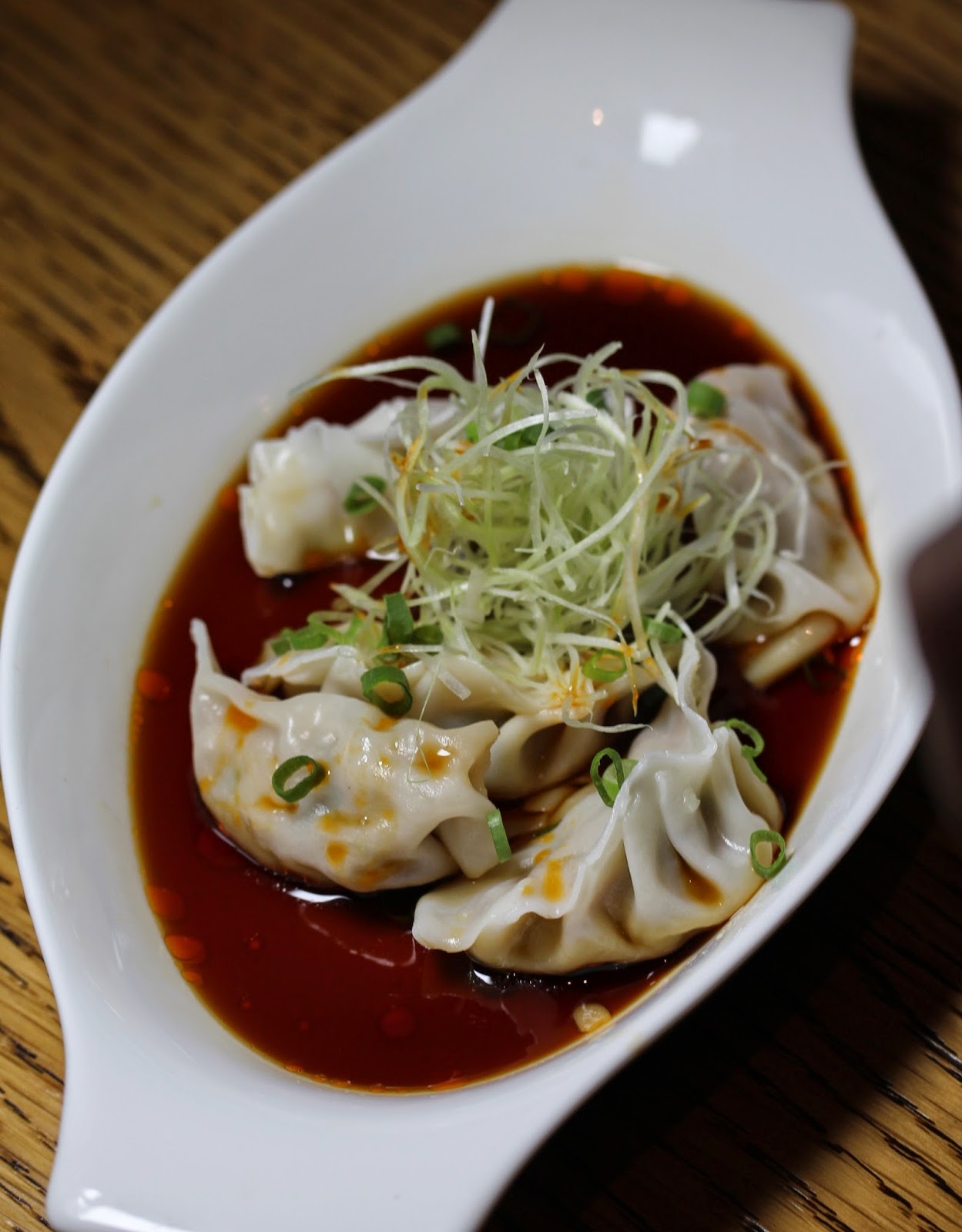 According to Ipuddo's Regional Operations Consultant, Tomo Kudo, "Ippudo always aims to bring to the table tasty selections..brimming with robust classic flavours with a hint of modern finesse.  It is founder Shigemi Kawahara's philosophy to continuously innovate"...in a nutshell.  He said a lot more.
The spicy boiled gyoza was good.  It's dainty portions certainly made it elegant, and we wouldn't have minded more. 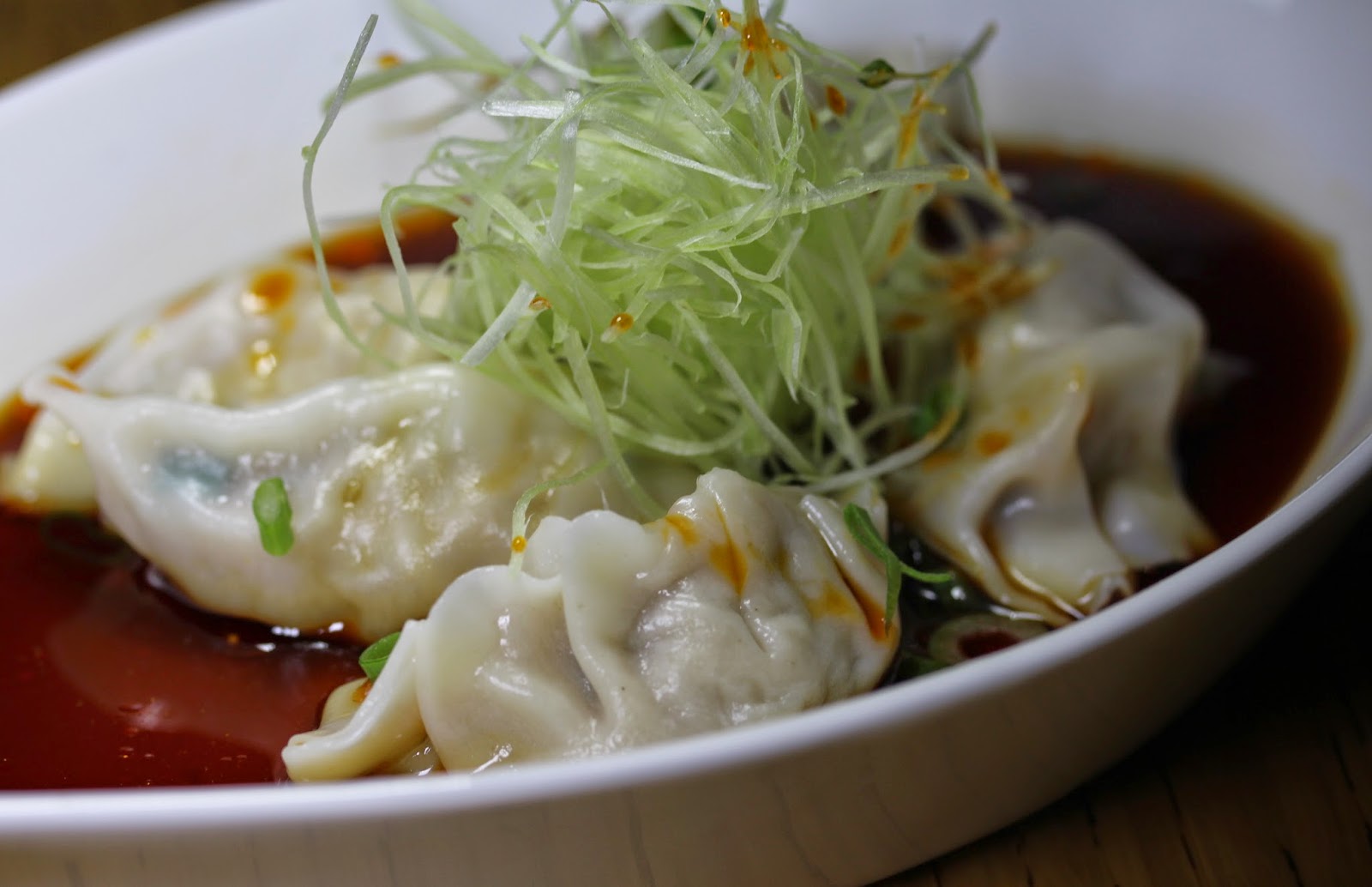 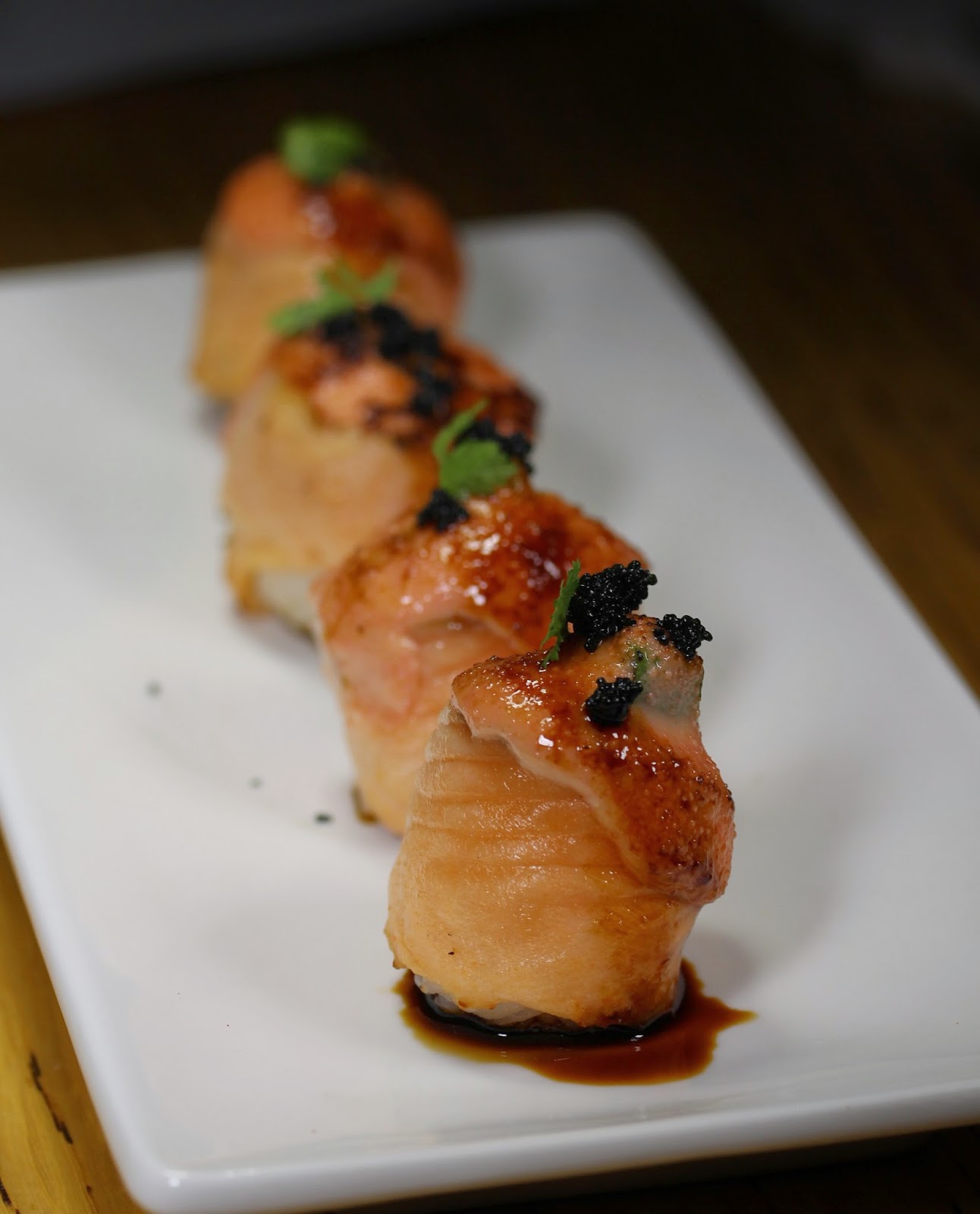 Seared Salmon Roll With Mentaiko, which unanimously seems to have been the favourite dish of the night.  I need to return to eat this again without the glare of the camera lights. 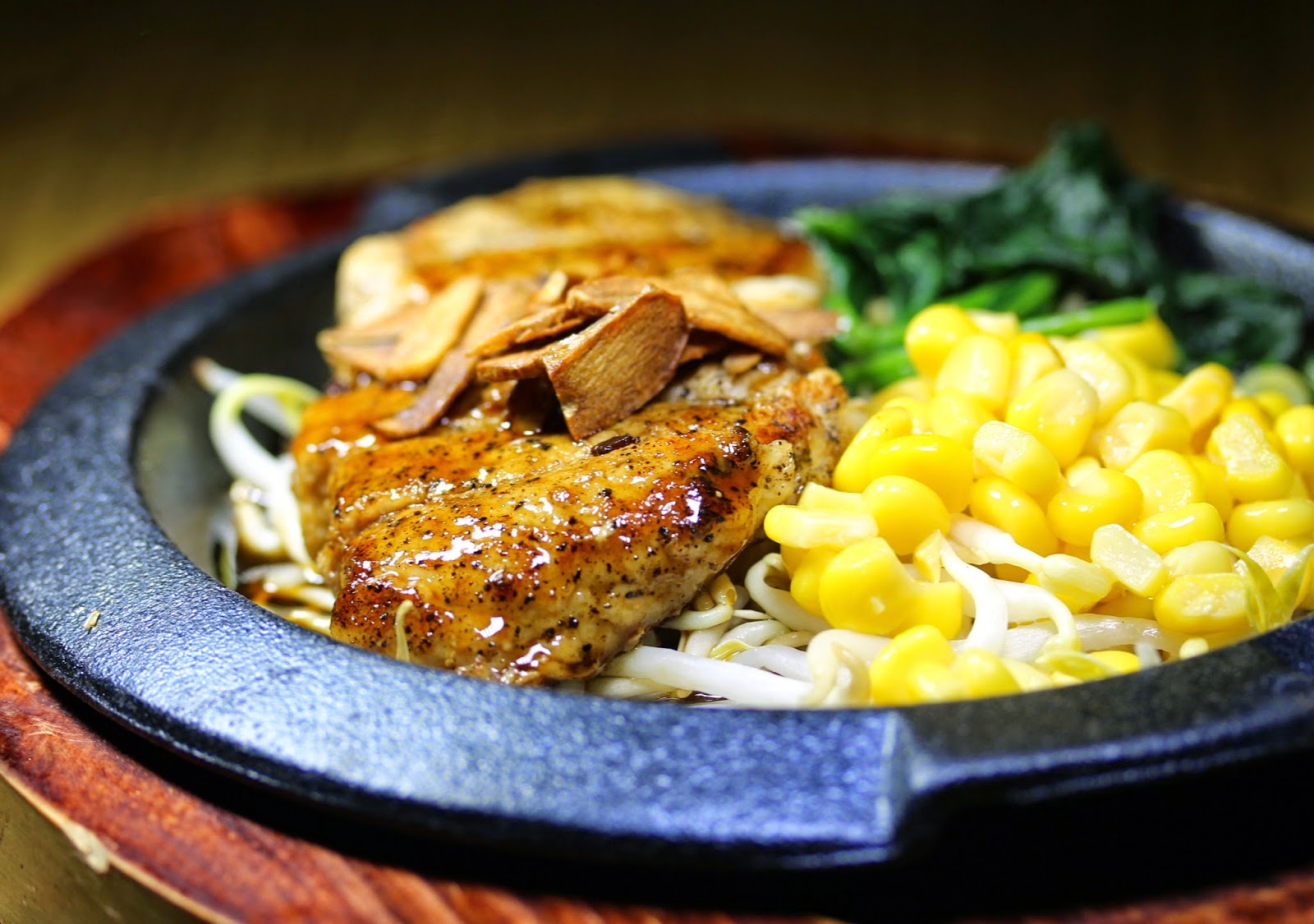 Pork Grill, which was rather pedestrian, but actually I don't mind it cos I don't like dishes drowned in sauce, so this minimalist dish of pork loin and vegetables actually appeals to me, and of course, who can go wrong with boiled sweetcorn. 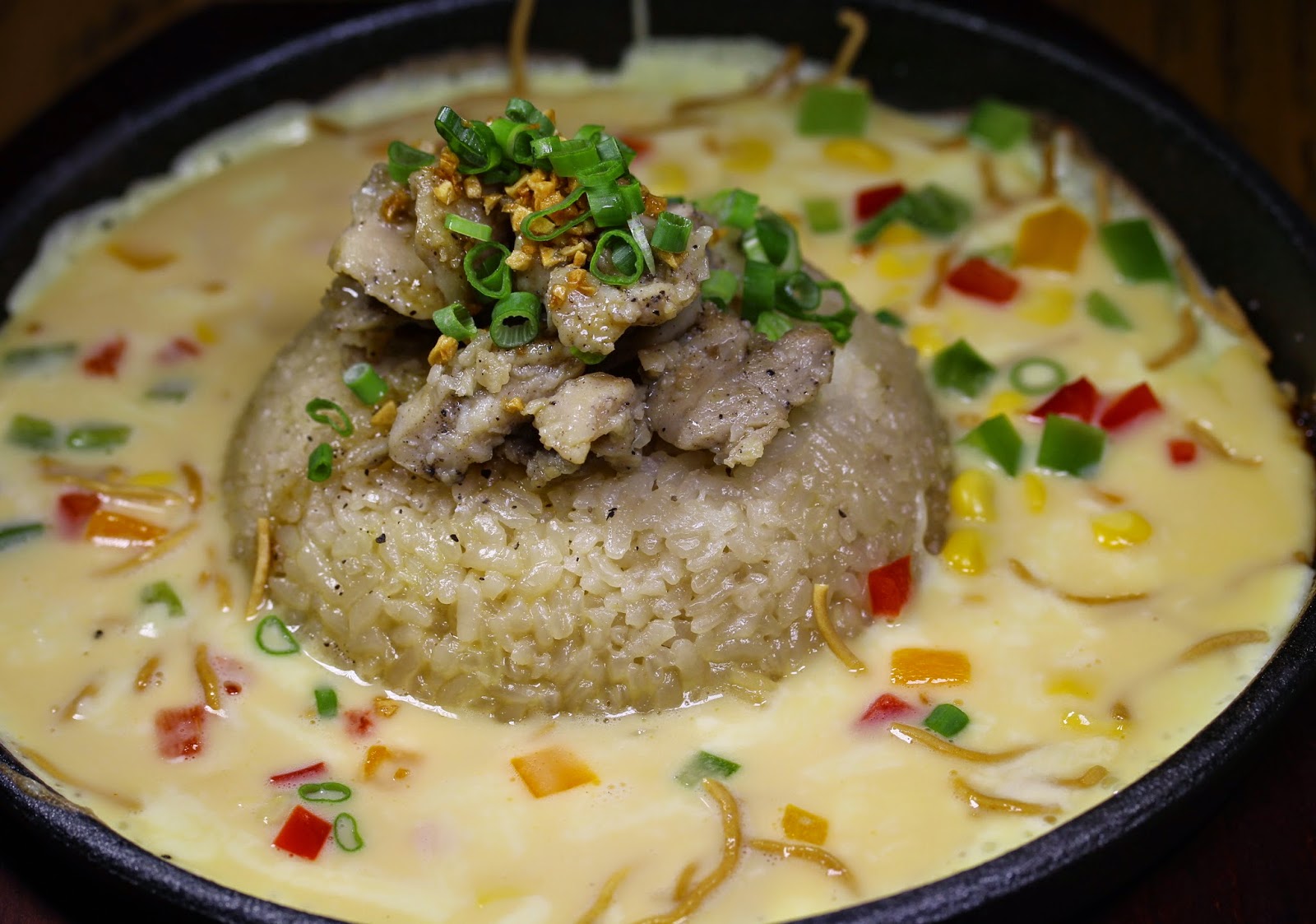 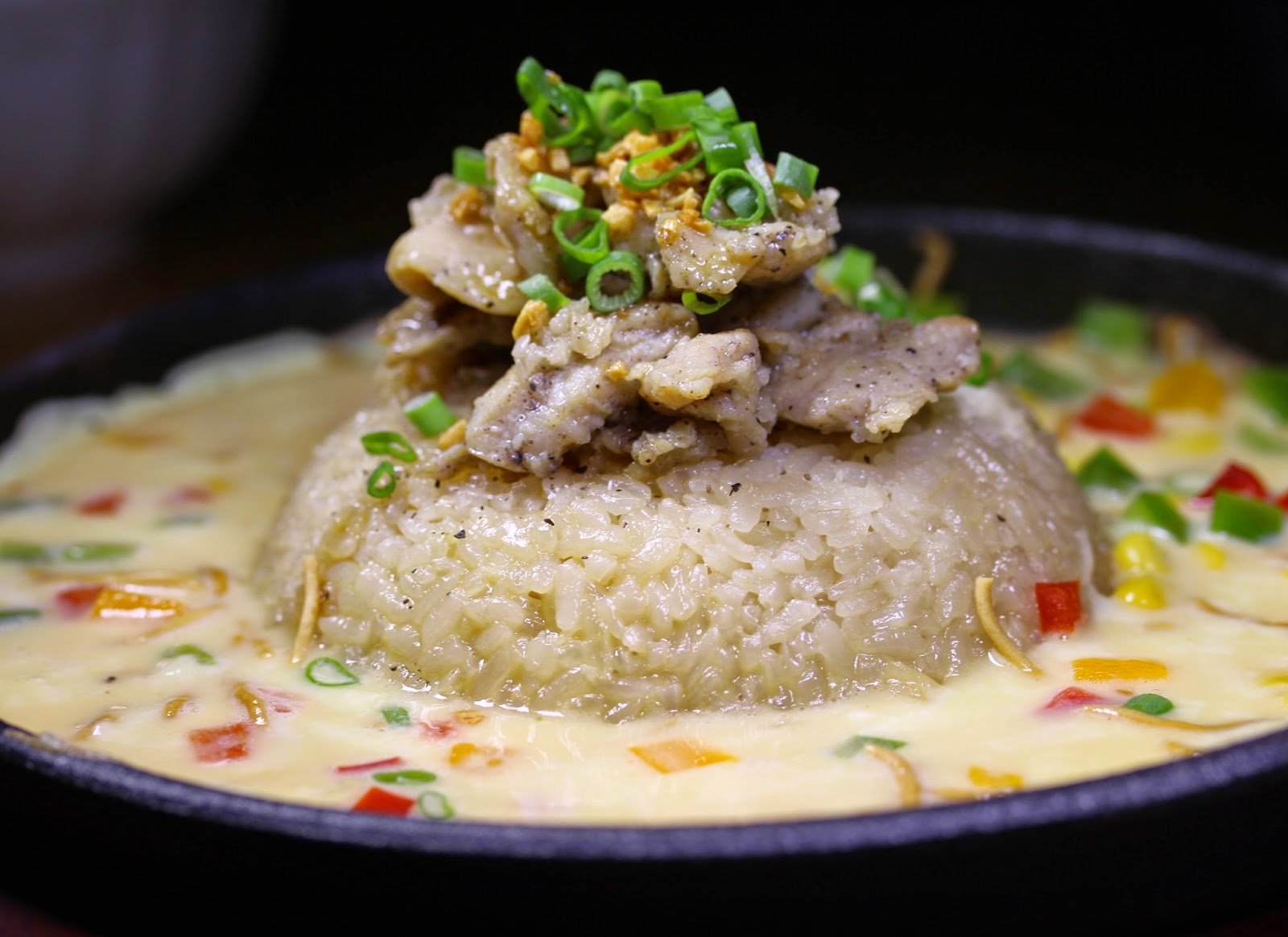 And if minimalism is the order of the day, then this dish was the exact opposite, rich creamy sauce that would clog the arteries and waterways, for this Teppan Rice With Beef Dish.  I can imagine one of my kids slurping this dish up with relish.  It was reminiscent of my childhood favourite, Chicken A'la King.  Which no one makes anymore. 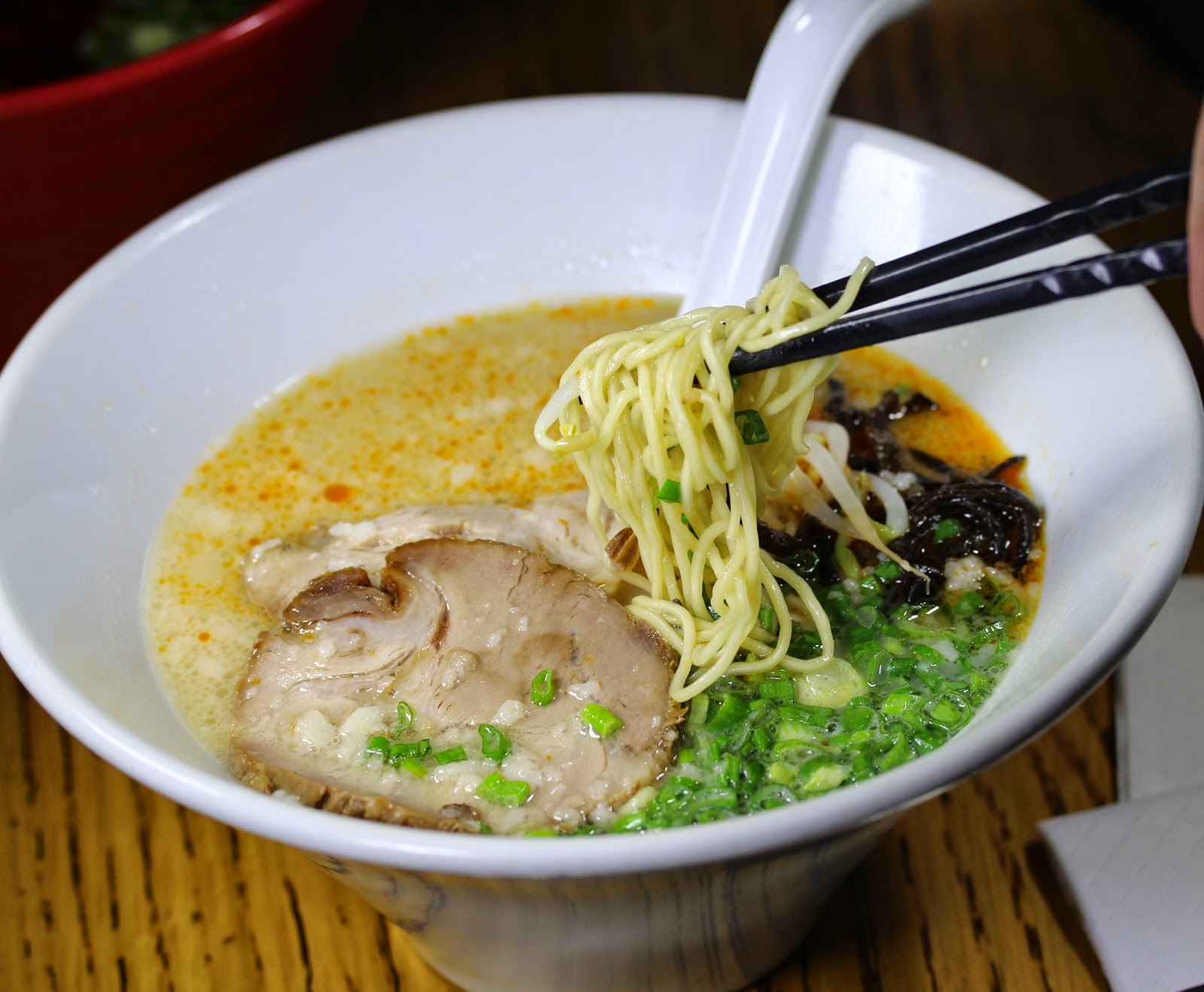 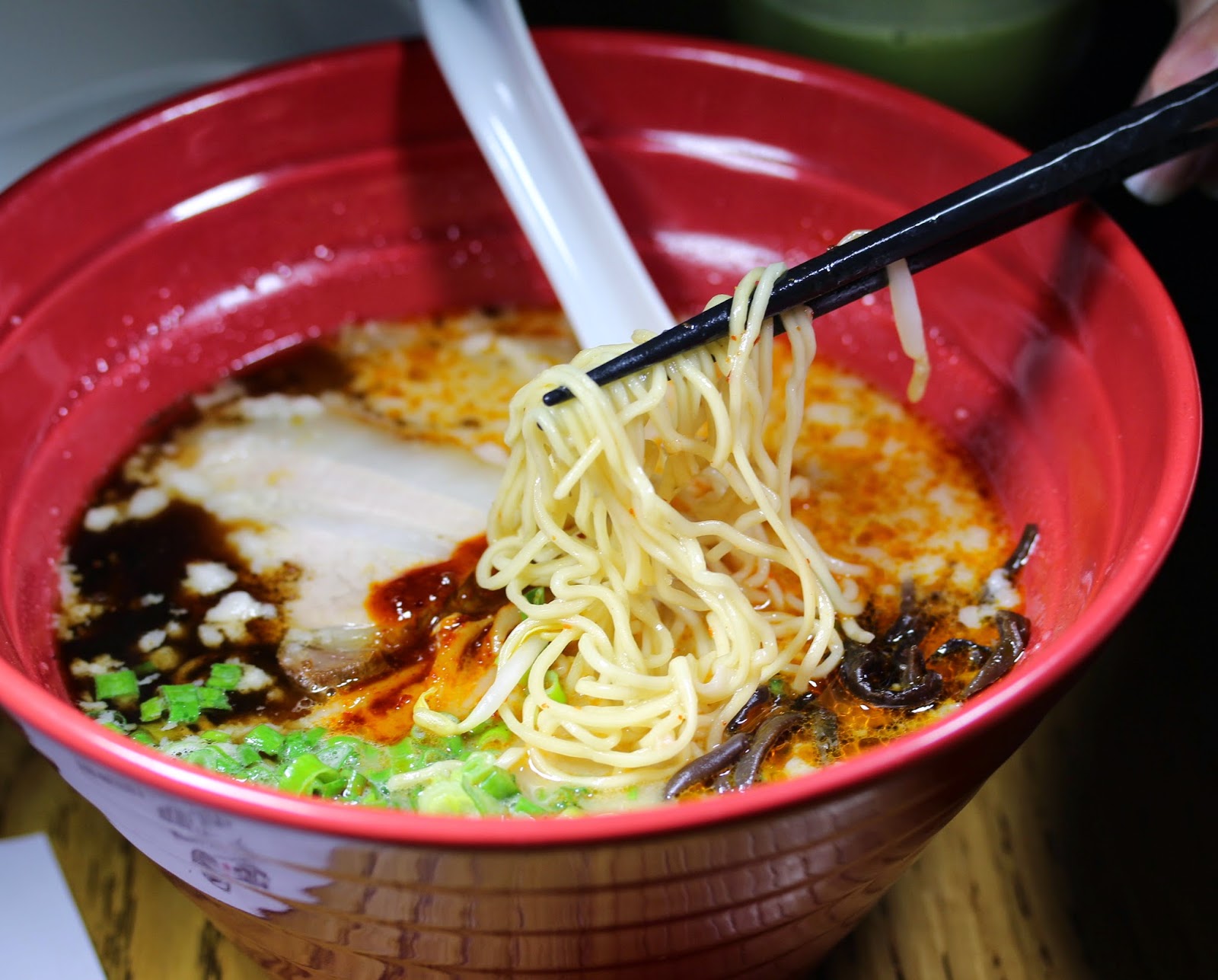 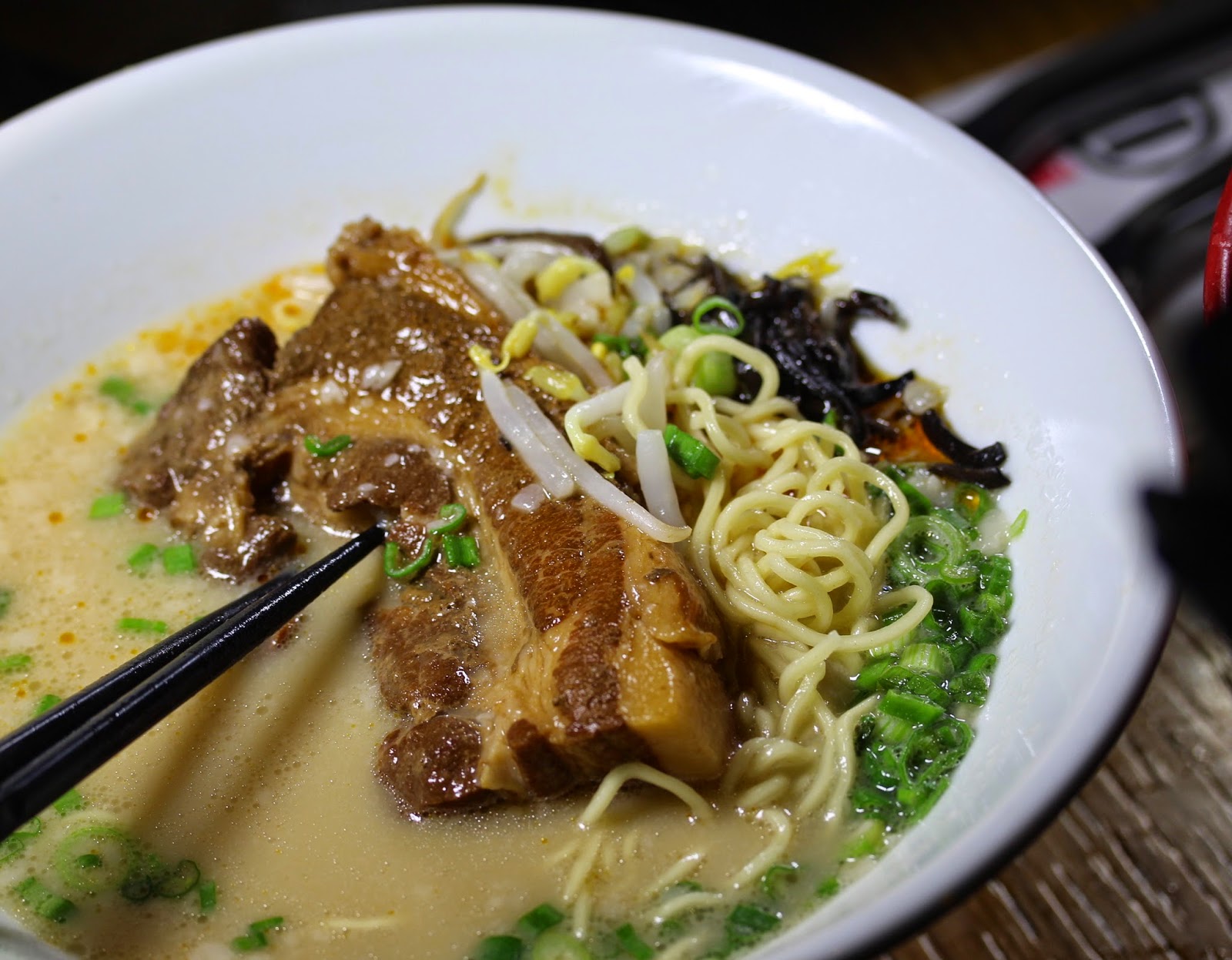 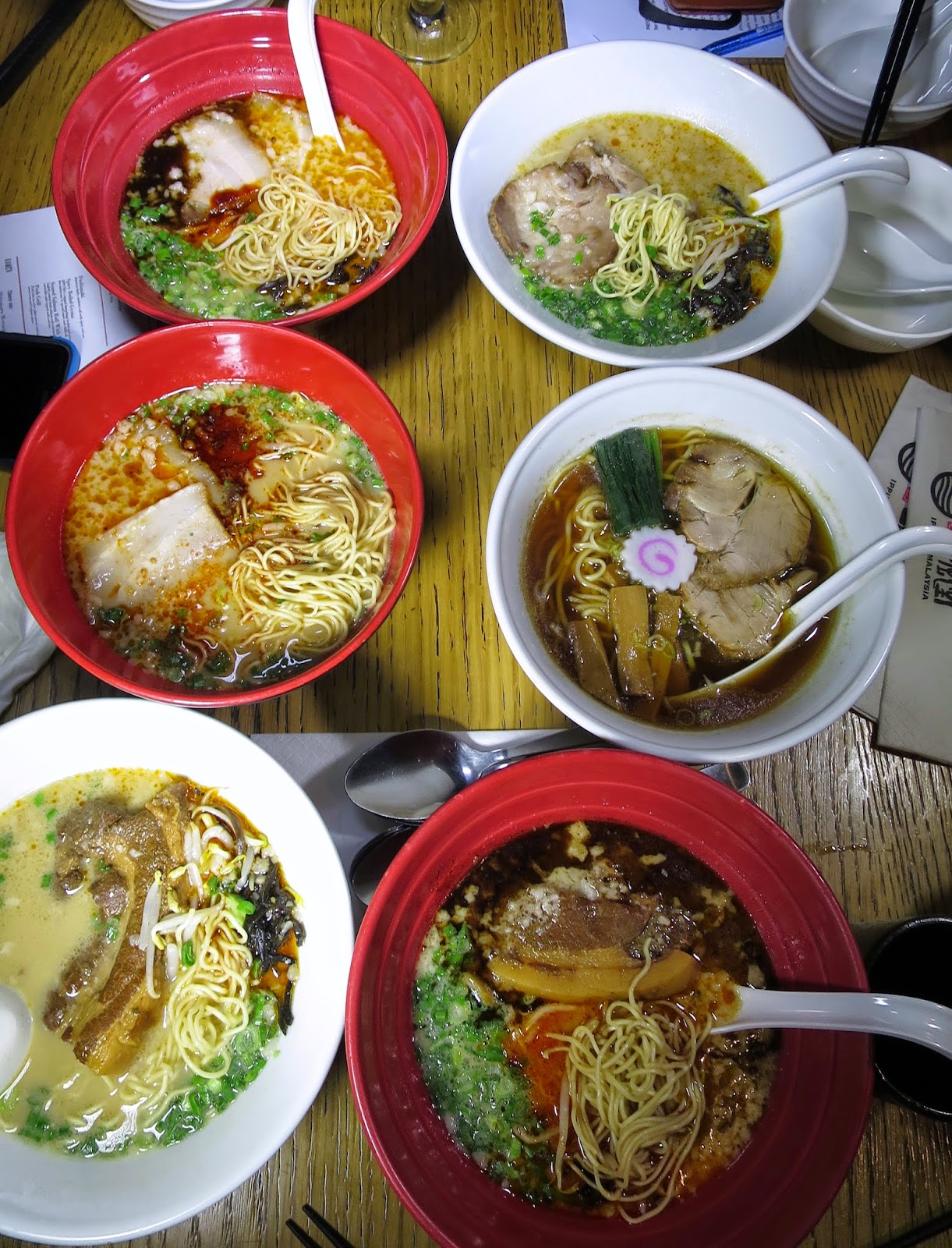 And, for the stars of the night, the new ramens.  Clockwise, from upper left, the Karaka men, the Shiromaru Motoaji, the Shoyu Ramen, The Akamaru Kakuni, Shiromaru Kakuni, Akamaru Shinaji.  Prices range from RM22.90 onwards.  Note the thick slabs of wonderful pork in most of the dishes, or the thinner slices which are equally good...which in my book, make these ramen (is ramen plural? is the singular raman?) winners.  Wholesome broth that has been boiled for many hours, 15 if I am not mistaken. 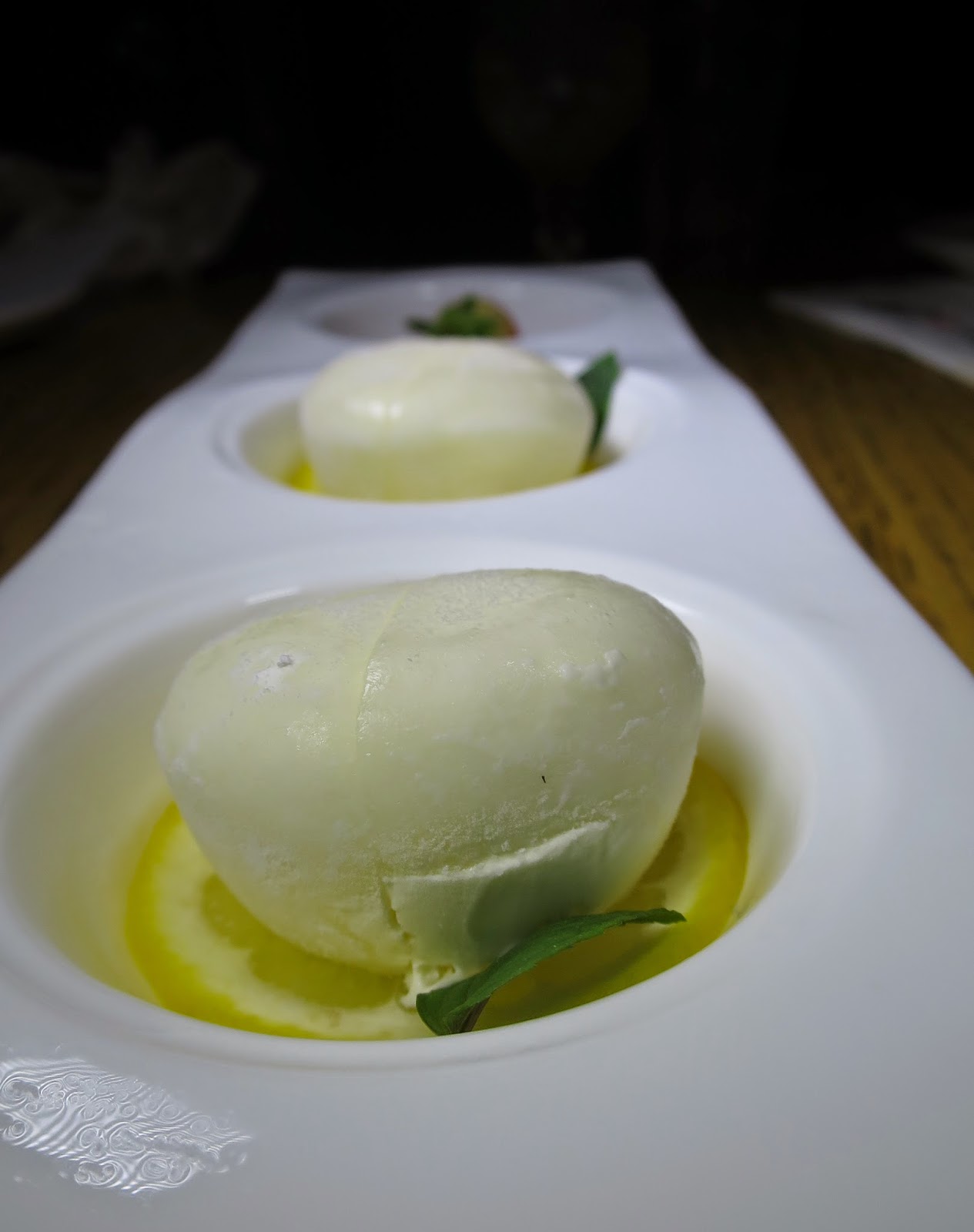 For dessert, the Daifuku, which was a mochi stuffed with ice cream, which I enjoyed.  Rather refreshing way to wash down all the lard.  Well, at least that's what we want to believe. 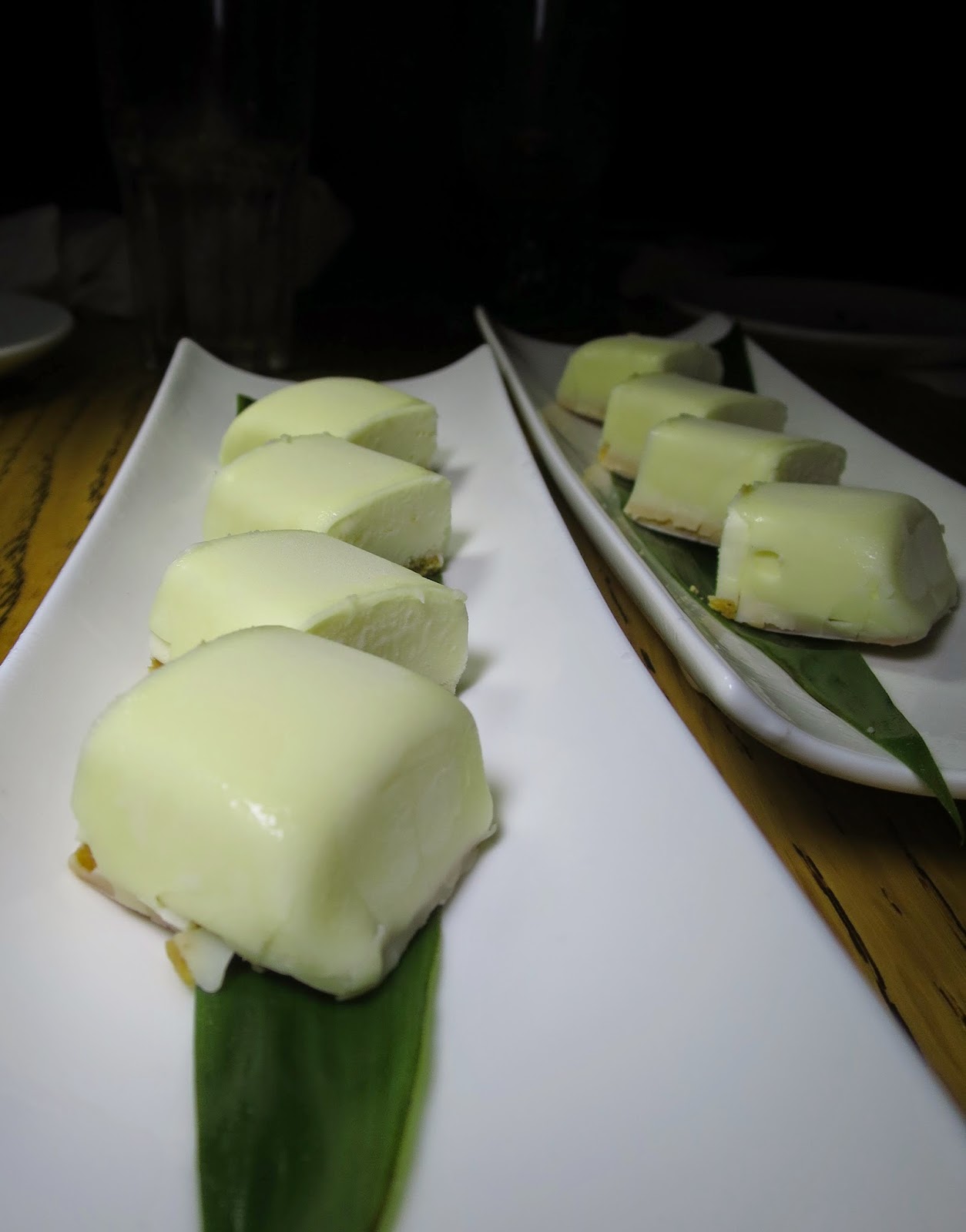 Looks like durian crepes hor... but its not. Cheese sticks actually, which is a light, typical Japanesey ethereal kind of cheesecake that really melts in the mouth.  Good stuff this. 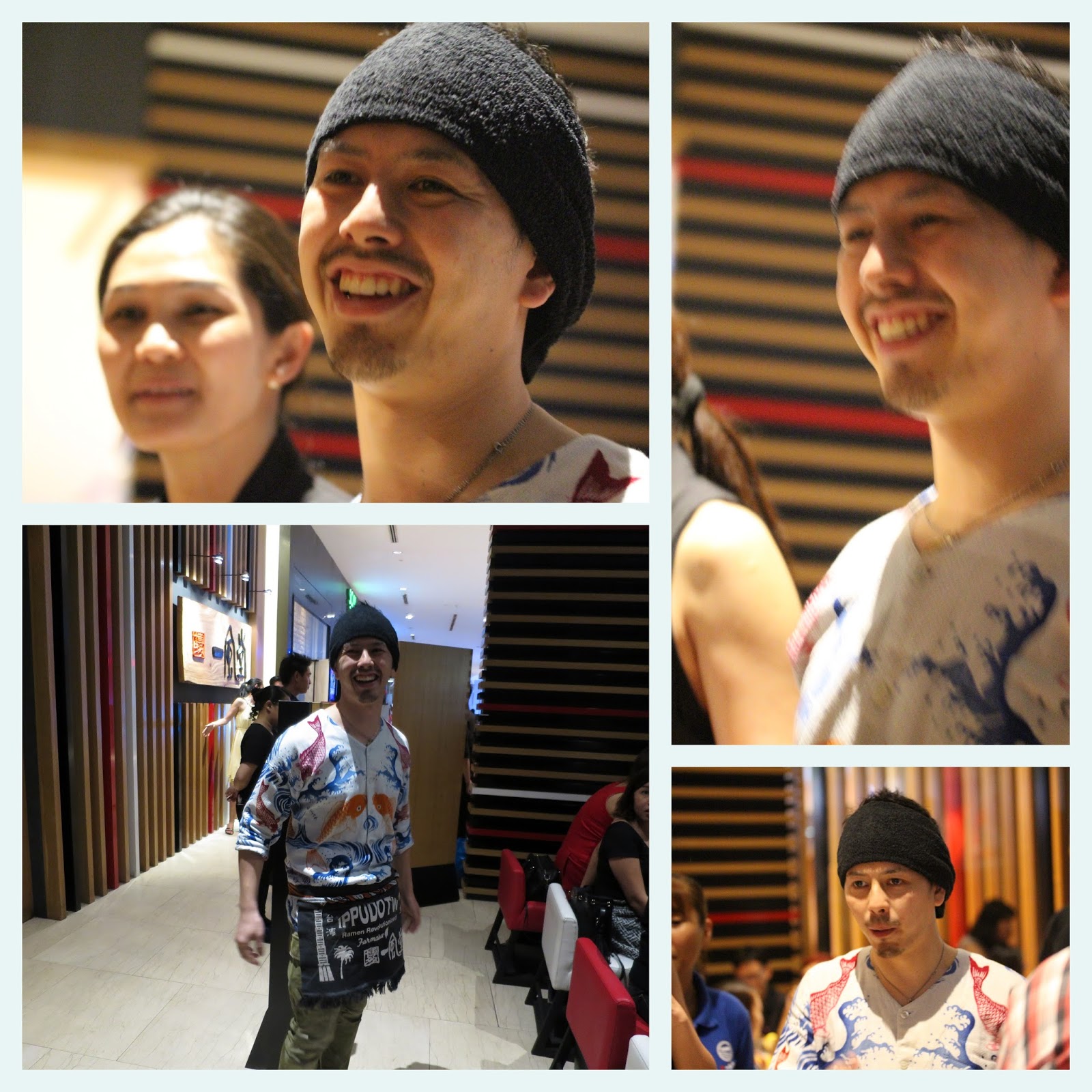 Posted by fatboybakes at 1:07 PM