A few months ago, I posted about a cute lil pop up cocktail bar, 44@APW.  As the very name implies, pop ups will pop up, and pop down... or move, like the mysterious lands above Enid Blyton's Faraway Tree.

Well, as a matter of fact, they have popped up again, at a location that is rather intriguing, at THE ROW, or what used to be Asian Heritage Row, once the hustling bustling centre of KL's nightlife.  The location is rather mysterious, basically, you use BUTTER & BEANS as the landmark, follow the rather obscure signs, go by faith down the back alley, which looks like a construction site, and lo and behold... 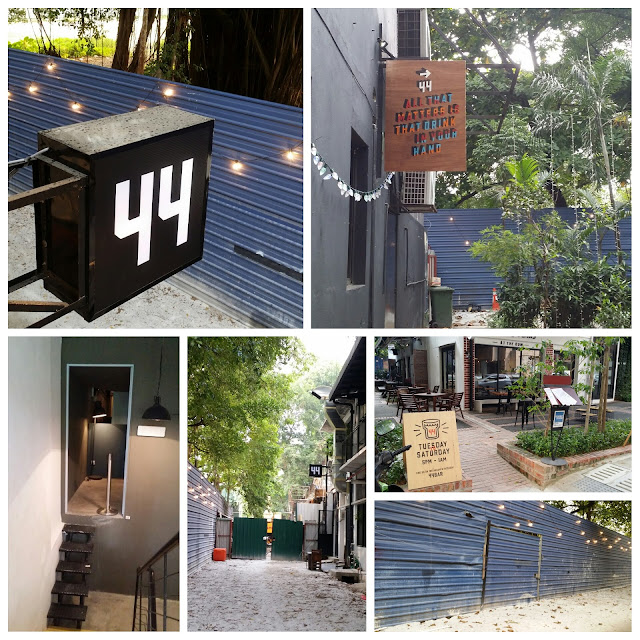 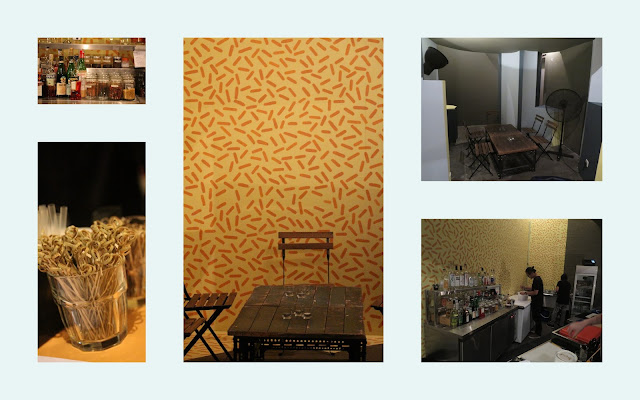 The same mixologist, CK, welcomes us, as his assistant whips up the first cocktail, Tango Mango. 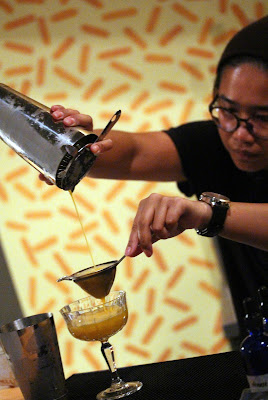 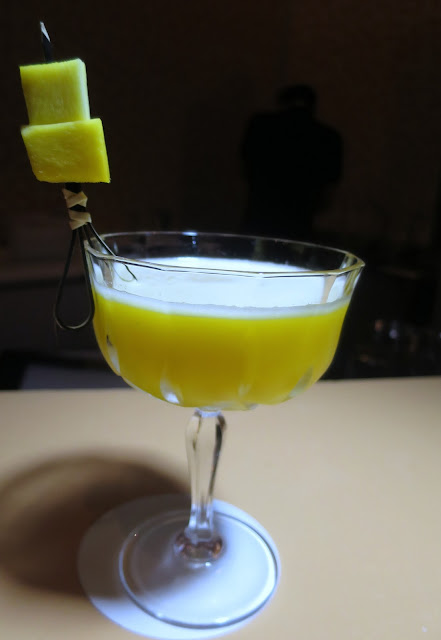 Tango Mango is a gin based cocktail, with taragon syrup, lemon, mango and egg white.  A nice way to start the evening.  A bit on the pricy side though, at RM42. 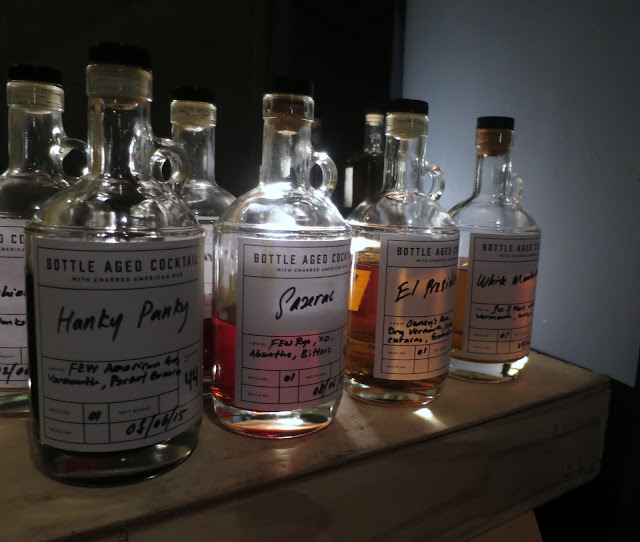 An eclectic line up of Bottle aged pre mixed cocktails that looked LETHAL!!! 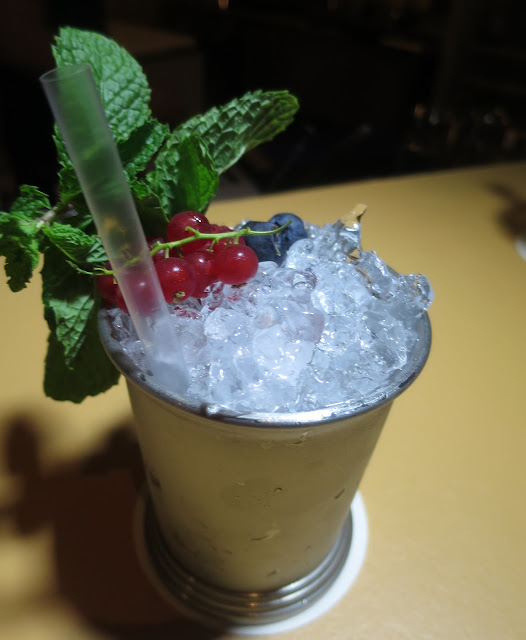 Ginger Berry Julep, Ginger, mint, bourbon and seasonal berries.  Love the presentation, in a steel goblet, so there is an air of mystery what lies beneath the ice.  Actually, I have no idea what color the cocktail is.  Also priced at RM42. 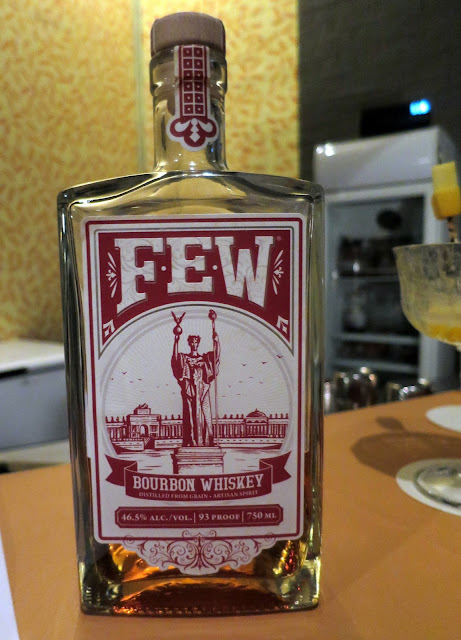 The 44 Pop Up, as we learnt the last time round, prides itself in presenting drinks we don't usually see in ordinary bars, such as this American brand, FEW, which has a fascinating history, being one of the few distilleries to have survived the prohibition.  Love their tag line on their website, FEW for the FEW.  We also learnt something interesting, the meaning of PROOF.  Basically it's the American way of describing Alc/Vol, and is basically double that.  So in the bottle above, 46.5% Alc/Vol = 93 Proof.  That's high proof indeed. 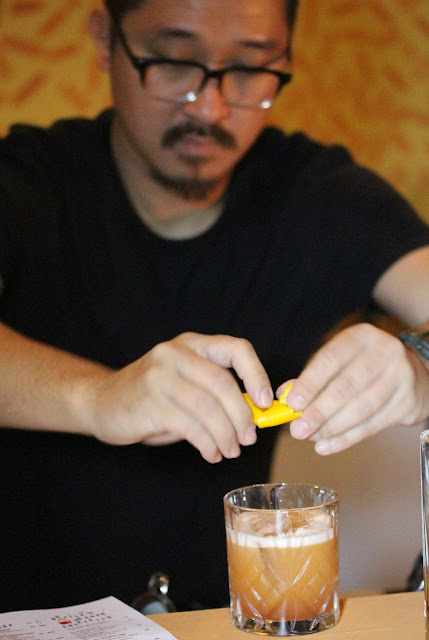 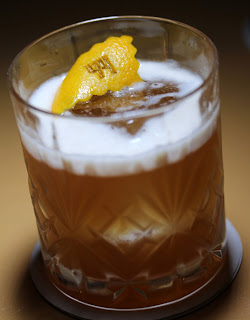 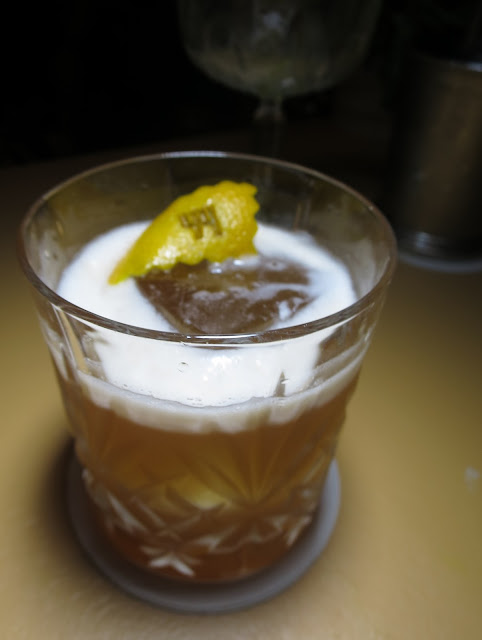 The Negroni Sour was my favourite cocktail of the day, as it wasn't as sweet as the rest,  Campari, Gin, Sweet Vermouth, lemon and Angostura Bitters, at RM40.  An assortment of flavours tantalise the palate, from the slight bitterness, to the tangy lemons. 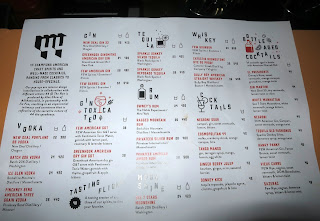 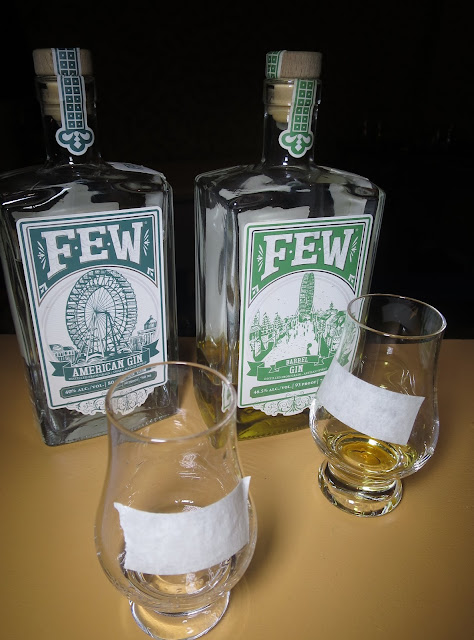 CK then let us try some FEW gin neat, which wow, is strong.  The barrel gin is stored in the same kind of oak casks for whisky, so the gin actually tastes rather whisky ish. 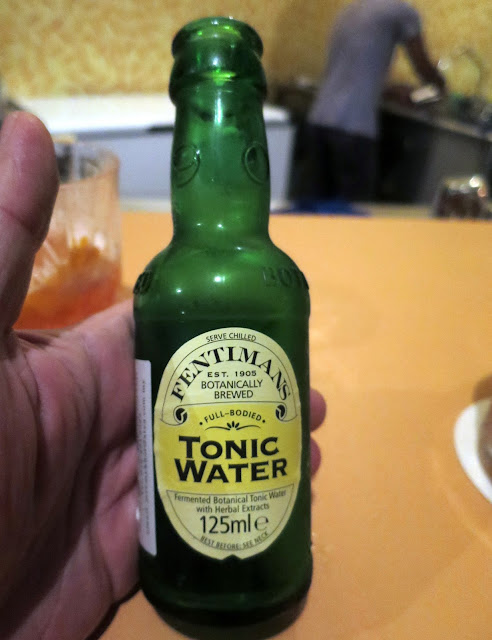 Even the tonic used for their gin and tonics are not your pedestrian Schwepps or F&N!!! 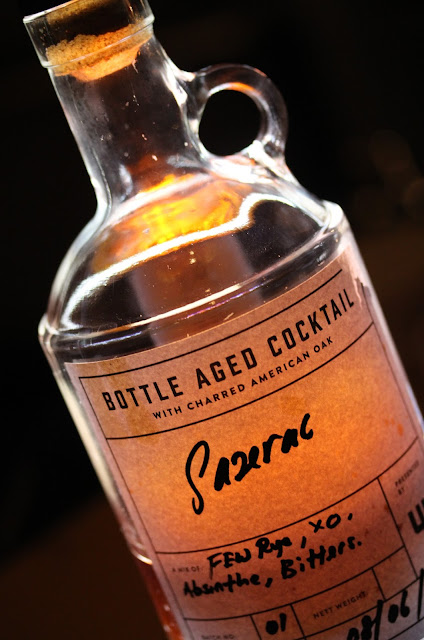 The piece de resistance, with smoking guns and all, the Sazerac, from FEW Rye Whiskey, Absinthe, XO, and Bitters... It's surprising I found my way home. 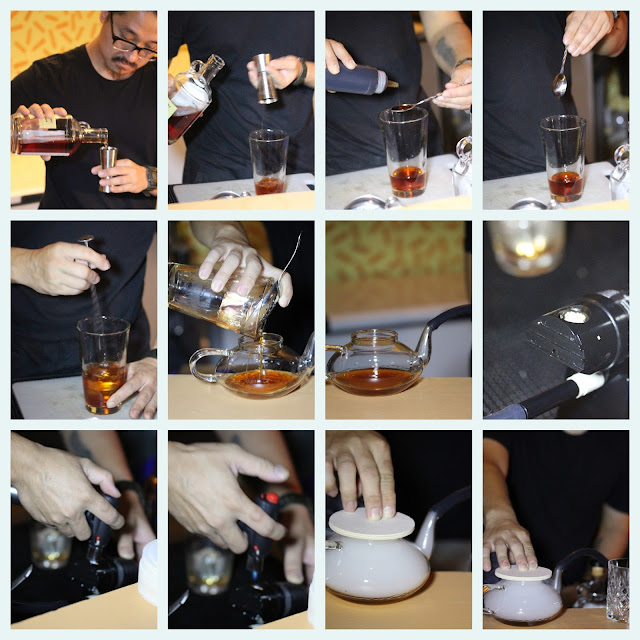 A picture paints a thousand words, so see for yourself, the complicated process, the smoking etc before it's finally served, 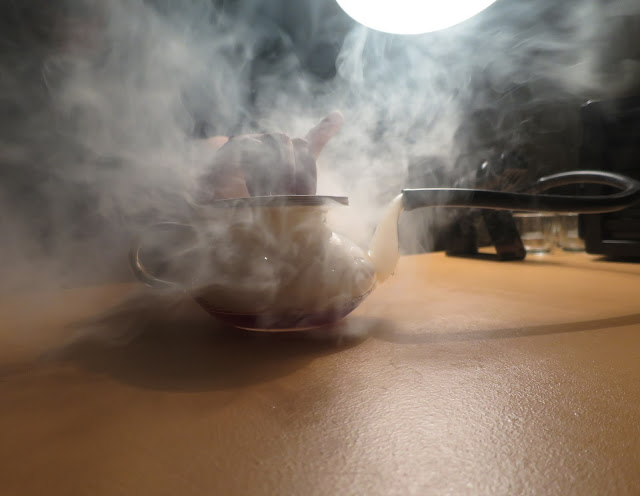 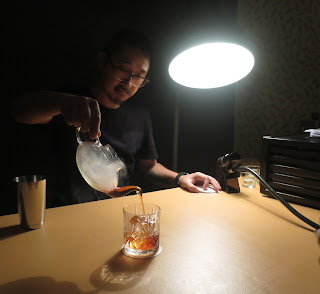 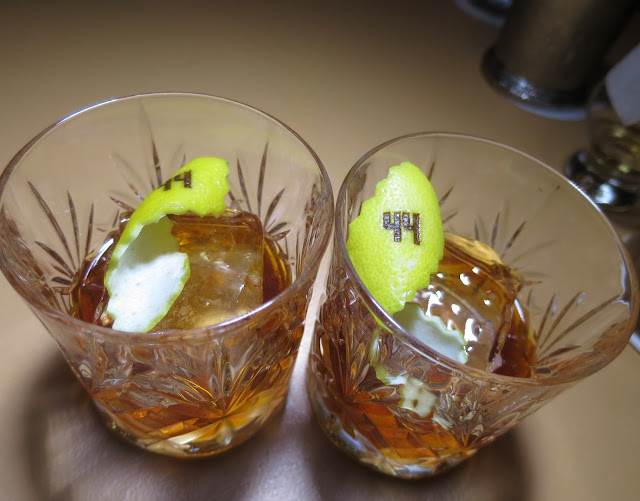 Just love how they have a branding iron with the 44 which they brand onto all the fruit skins used as garnish!  By this time, I was feeling a nice buzz, and watched in fascination as they continued mixing for the other customers that had come in. 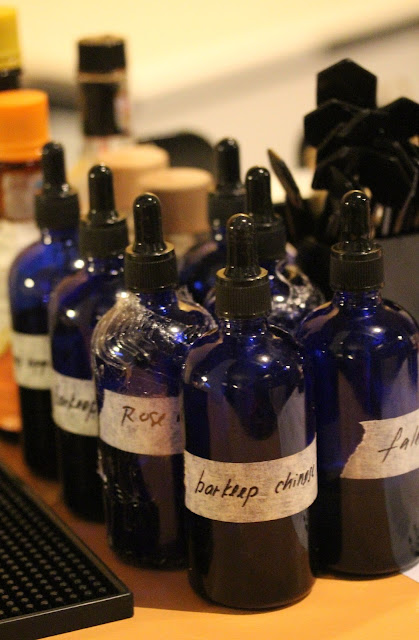 Jars of aromatics, just a drop to give that added flavour. 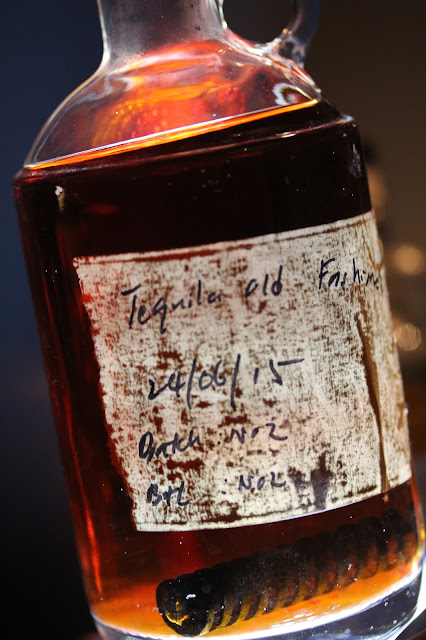 Note the piece of wood in the bottle, to help with the bottle aging process and to give it that barrelly woody taste. 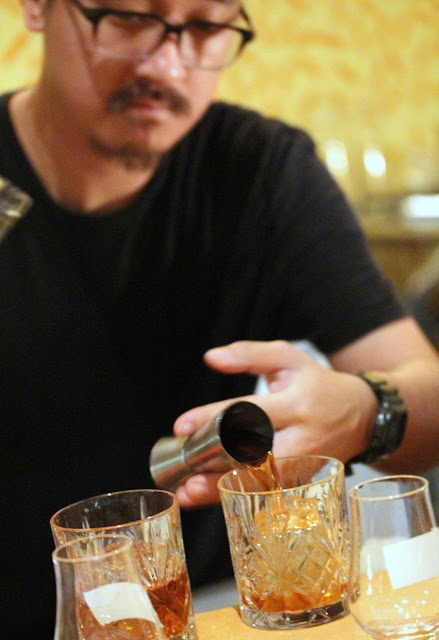 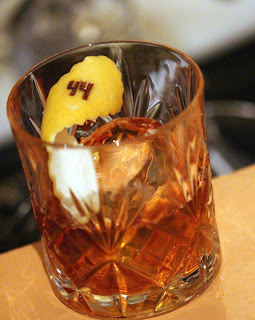 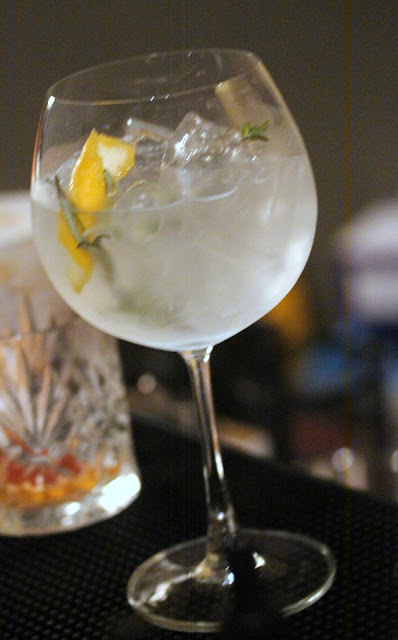 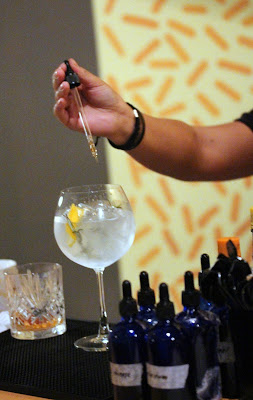 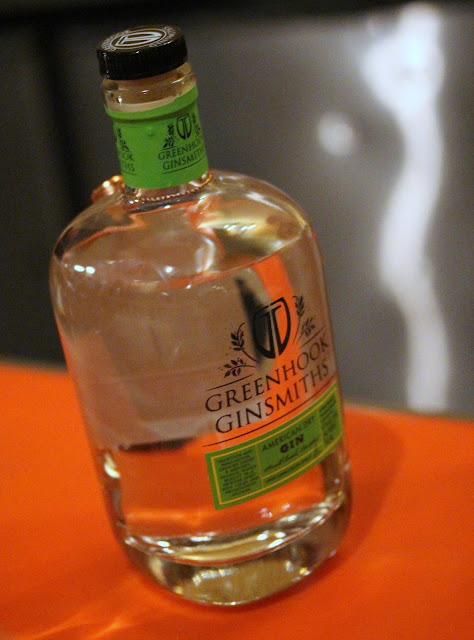 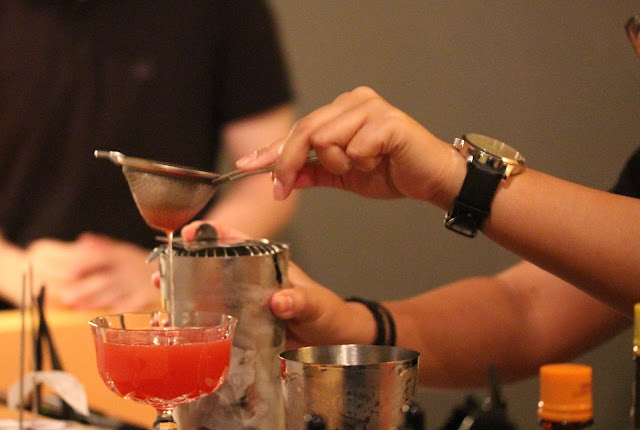 Such pretty colours. I think this was the cosmopolitan but it wasn't for me. 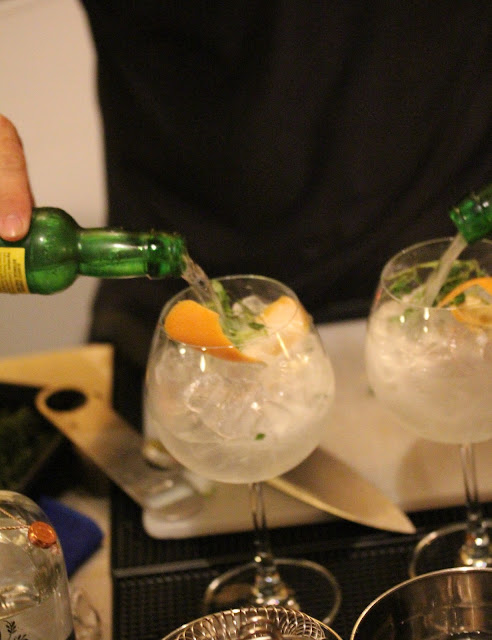 More Gin and Tonics mixed for other customers.. 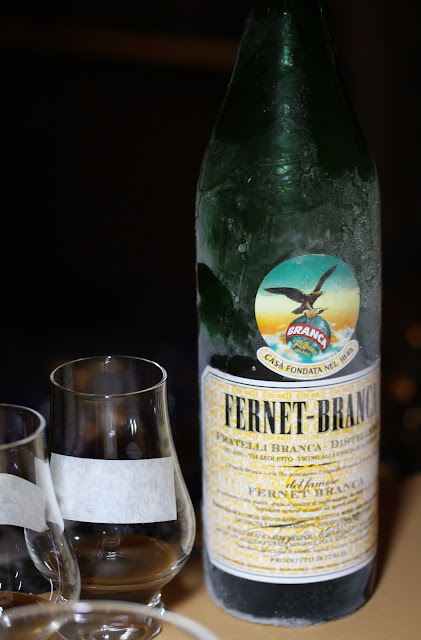 As a finale, CK whips out this frozen bottle of Fernet Branca, an Italian Amaro liquor, that has a distinct herbal taste, and also, served as what is known as the BARTENDER'S HANDSHAKE....last drink so to speak.  It kind of reminds me of some chinese herbal concoction, the type you drink for heatiness or sore throat.

According to wiki, Intensely bitter since its inception in 1845, Fernet-Branca has been produced according to the original recipe that has been handed down from generation to generation. The bitters are made from 27 herbs and other ingredients. The exact formula is a trade secret known only to the Fernet-Branca president, Niccolò Branca, who personally measures out the aromatics during the production process.

It was fitting end to a lovely evening of cocktails.

Many thanks to Delfina & Jasmine for the invitation, and to CK for his hospitality, and for the bartender's handshake.
Posted by fatboybakes at 6:36 PM

Glad you found the place and even gladder to know you got home safely after lol.

Everytime I see a bottle of fernet coming out, I run for my life. It tastes like extremely bitter herbally Chinese medicine. Confirm of wake you up even when you're half dead.