The Boundary of the Years

As the year drew to an end, there was a spate of parties, and quite a lot of baking. Remember my "graduation" cake from the Wilton decorating course? I found a good use for it, as it turns out, the next day was my parents' in law's wedding anniversary. And since that floral cake, complete with 2 love birds have this 50s/60s feel to it, I thought it would be apt, although I did point out several times it was for "decoration" and not so much for eating.

Turned out to be a good idea, coz the kids attacked the sugar flowers like bees would attack real ones. 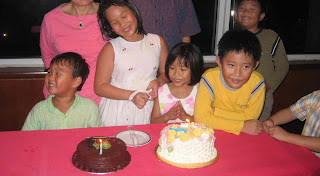 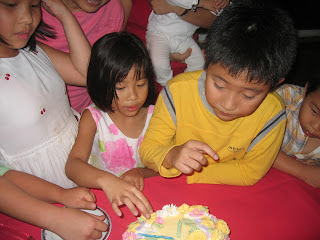 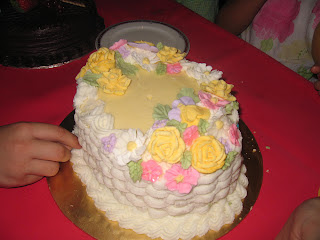 Can see that the two birds are gone. Everytime I look at that cake, I shudder at the thought of all those flowers, and basket weaving. Why oh why!!! 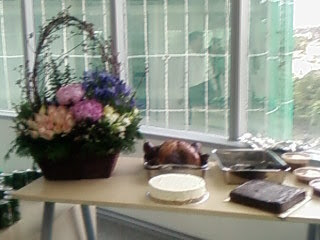 In a small screen on the phone, this picture looked like something from a Martha Stewart setting. But after enlarging, the resolution seems bad. Anyway, it was taken at a friend's office party, whereby I had supplied the cheese cake and the brownie. In the background is the turkey. 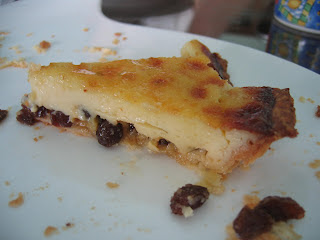 This rum and raisin pie, extracted from Martha Stewart's baking handbook, seems to be the cake du jour, as I think I had the most number of orders for this in the last 2 weeks. However, my "duty free" rum has run out, and it's no longer viable to sell it commercially, unless the buyer provides me with their own rum. (if I were to incorporate the price of the rum in, it would sound absurdly expensive). The raisins have been swimming in the rum for as long as possible. 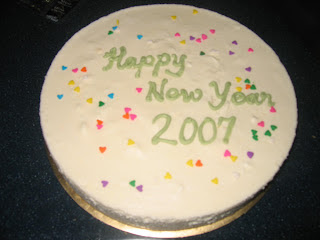 For New Year eve party, my contribution was a 2kg lemon/lime cheese cake, a choc oreo cake and a rum and raisin pie. The latter two were finished, whereas the cheesecake was not laku at all. I decided to tah pau half of it home, only to have my cousin drop the whole box on the way out.....

Ah well!!!! Anyway, Happy New Year all, may your cooking pots always overflow with abundant goodies, may good smells emanate from your ovens, and may all your kitchen appliances never konk out at the most inopportune moment.
Posted by fatboybakes at 2:33 PM

Happy New Year! Heard good things abt yr brownie from Ms. Chow which u supplied to church that day. Looks like business is booming.

Pssst, if you love Esque crockery i.e. those white plates and etc, they're selling them discounted at Hartamas Shopping Centre near to Times Bkshop (20% to 70%). Bought one 30cm white round cake stand for RM31 (great deal at 60% off) and another glass one at abt RM100 plus. The glass one is nifty as you can turn it around to make it to a trifle bowl with a stand.

happy new year, fatboybakes! wishing you lots of profitable orders and fun non-flowery cake designs in the year to come!

boo, thanks for the tip. will make my way there tonight i think.
i desperately need a good trifle bowl, ie, one with a large flat base.

snowdrop, thank you for your good wishes. any chance of us all meeting up in 2007?

Some well-wishes for your year ahead:

Wishing u a happy new year and hope i can try yr tiramisu cake one day..

if u looking for flat base one, they have another one too. It has 4 small glasses and one large one. Very good for trifle. The glass cake stand I bought - sold out for that day so hopefully they added more. Also bought white serving plates from Crate and Barrel.

HL, thanks for the flowery wishes. u too. may the fruits of your wedding cake...err...bear more fruit...

jackson, ya, when you find the time, the tiramisu's yours

boo, hartamas shopping centre is HOPELESS!!! i went there at 9pm, and everything was shut. i did see the stuff through the fence though.

Did I read Crate and Barrel?? Is that here oredi, in HSC? Um...boo, I guess that question's meant for you.

Happy New year Fatboy! May your orders for this year overfloweth until alot alot. :D

ooh, spot, what is crate and barrel?

unkaleong, i cant seem to log on to your blog lah. eh, next time u in town, we must ask backstreetglutton to organise meet up...though i understand that as expatriate returning home, you'd be inundated with social obligations.

snowie, i am counting on blog legend, boolicious to organise a meet up. we need a nice, cheap, venue with good food and where we can bring our own plonk. (booze), and wont be chased out at 10pm. oh, and of course bring own desserts. i would suggest THE VINTRY.

Can can...Will talk to my Manager to try to extend my trip home during the CNY. Work from the office in PJ. Hmm..Only you have problems accessing my blog (?)

eh, can give a refresher course on these cakes ah so we cake dungus can learn more and appreciate all yr inventions .....( afterall we only know how to eat )

eh, tonixe, saw unkaleong's reply or not? make sure u organise gathering okay, during CNY time. i WILL bring a dessert, or desserts. and boolicious can prob whip up something too.

as for refresher course, whaattttt are u talking about??? recipes, or what's available? if you want a list of all cakes available, u can go to http://fatboybakes.blogspot.com ma.

unless you're talking about a baking course in 300 words.....which is of course, impossible.

spot - yeah this place was selling some Crate and Barrel plates. Dunno whether rejects but I did find a nice white looking serving platter.

fatboybakes - I vote we nominate tonixe to organise floggers meeting. He will make sure all the pretty gals turn up. It's also an excellent way for him to get all their contact nos for his little black book.

Fyi, Crate and Barrel is an American hseware brand. Expensive stuff which I always desire for when I am in the USA.

Fattyboybakes - wow,these cakes truly speak for this blog...that is, Have your Cake and Eat it too!!!

rasa malaysia, ya gorgeous lass, thank you for dropping by. hopefully one day during the bloggers get together, you'll get to err...have the cake and see if its worth eating.