About 18 years ago, a good friend of mine brought me to this quaint neighbourhood pub, DECANTER, on Jalan Setiakasih 5. It was run at the time, by two sisters, Jo, and Eileen, and well, it became the pub where everyone knew my name...(it's not NORM). From thenceforth, me and my friends kinda "grew up" there. Seasons came and went, girlfriends became exes, we held meetings, discussing the latest "acquisitions"....indeed, many a life defining moment were captured in that pub. Their fried rice with extra bulls eye was our staple diet, so muh so, Jo always chided me for recommending "only fried rice" to my friends. They had other stuff too, chicken pot pie, their signature peach and banana crumble, home baked cheesecake..... ah, nostalgic glassy look in my eyes.

Fast forward to 18 years later.....the original had been bought up by a prominent retired politician's son, who also has a string of other F&B establishments. Decanter itself went through a total image change, and spawned more outlets, like religious people who don't use contraception. I kinda stopped going..... I mean, part of the charm of the place was the personal touch the two sisters brought...and even the waitress etc, knew what my normal order was. A new era had dawned, and the old had diminished.....

Until.... Ryan Khang of MY NOURISHMENT invited a select group to try out the food at Decanter Too. 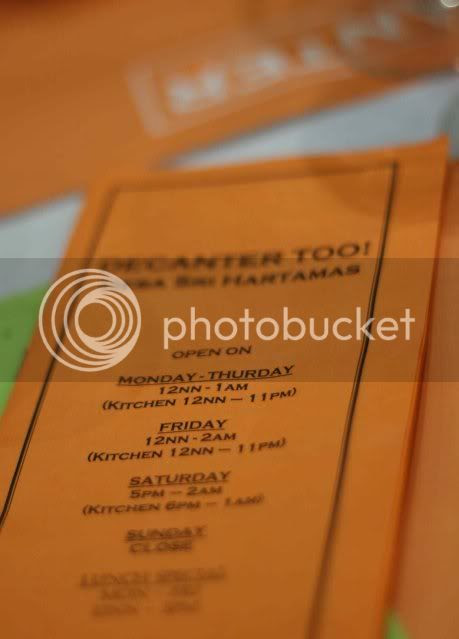 In place of the two (occasionally) grumpy sisters, a young lad, who was probably not even in primary school, 18 years ago...helming the outlet at Desa Sri Hartamas. Okay, so they have a different target audience, and a chick magnet is placed there to lure them in. 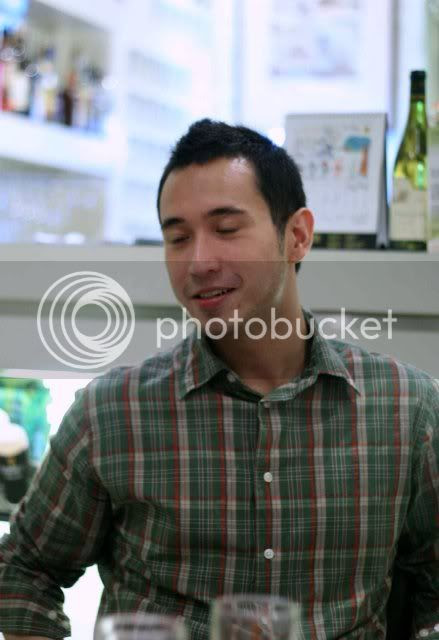 The very affable manager, Timothy, made us feel very welcome ....

A few serious moments, or so it looked. James is one of the editors of MY NOURISHMENT, together with Ryan etc. Cumi is the other half of Ciki..... 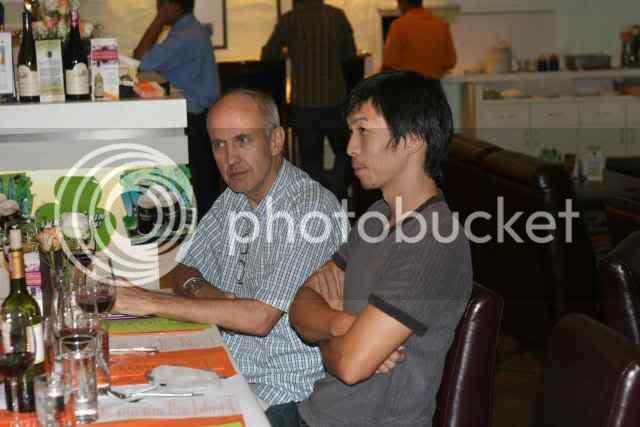 Black boards. There's something so quaint and charming about specials written on a blackboard, using chalk. I wonder if schools today still use blackboards. Remember how we used to rush to volunteer to de-dust the duster? Life was a lot simpler those days. Whacking up a cloud of chalk dust was enough to make our day. No play station, no facebook, no handphones....we could concentrate on what mattered, such as dusting the duster and making sure blackboards were clean. 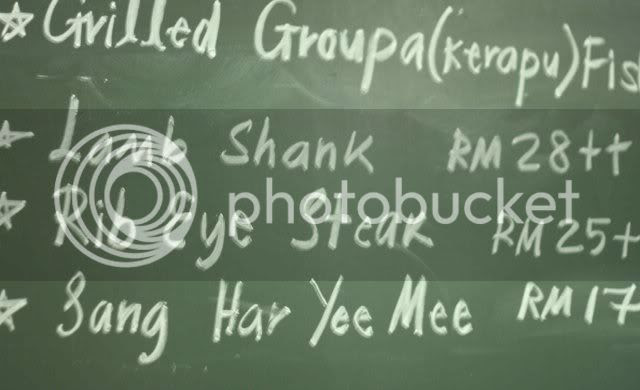 I wondered about the Rib Eye steak...RM 25, almost half the price of what is usually charged at other restaurants. Perhaps the owners have their own cow farm. 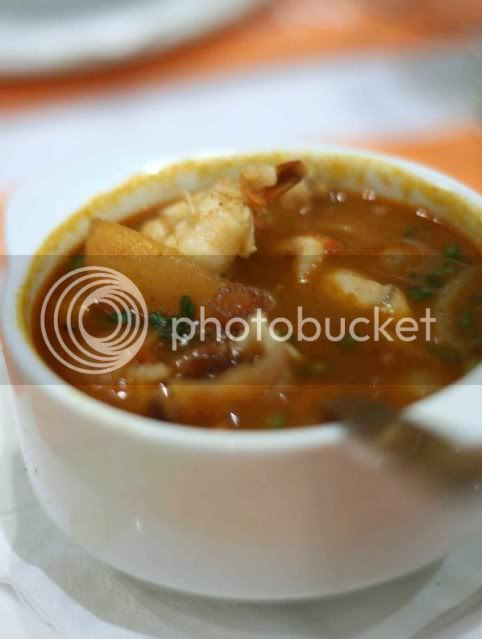 Our starter was a lovely spicy Tom Yam Soup, which only James & I managed to finish. Ciki was melting from the pedasness, Cumi doesn't take prawns, Nipple Joe had turned a scarlet shade from the chilli padi, Ryan ...well, just looked too delicate to finish the entire bowl...afterall, he has his svelte figure to maintain. I enjoyed it thoroughly, have always been a fan of Tom Yam, and this one was good. Lots of ingredients. 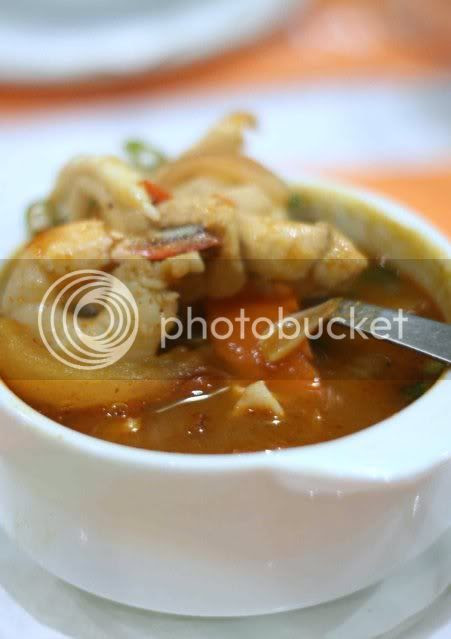 The next dish that was served were these chicken wings, but they flew away, after being photographed. Apparently they weren't meant for our table. Drat. Had we not had been busy snapping away, we'd have polished it in a sec. 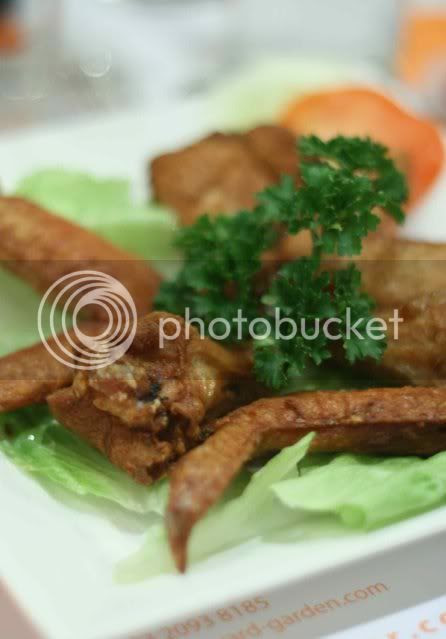 Then came the Sang Har Yee Mee. Tasty, and adequate. I personally prefer sang mee to yee mee, but it was tasty enough, and the gravy not overly starchy, though someone did comment on the liberal use of corn flour in a lot of the dishes. 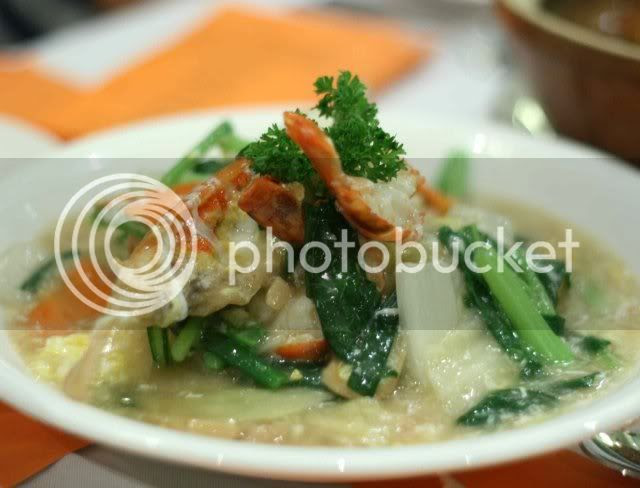 One thing I have to say is, it tasted very "clean". It lacked the years of grime and probably the wok hei that you'd find in Soo Kee's sang har mee, or other older establishments. 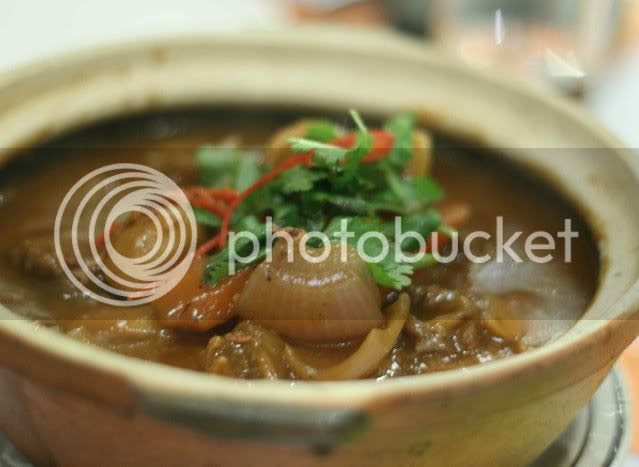 Mmm, the yummy oxtail stew. I am not sure what's ethnicity of this dish, it tastes like a cross between our soup ekor, oxtail soup, and stew, all combined in one. No complaints here. The meat on the tail was tender and falling off the bone. The gravy was screaming for some carbo, either bread or rice, but Nipple Joe was too Hak Hei to ask for it. Pan fried garoupa, with garlic butter and vegetables. Alas, I think because of the photography, etc, the dish had gone cold. 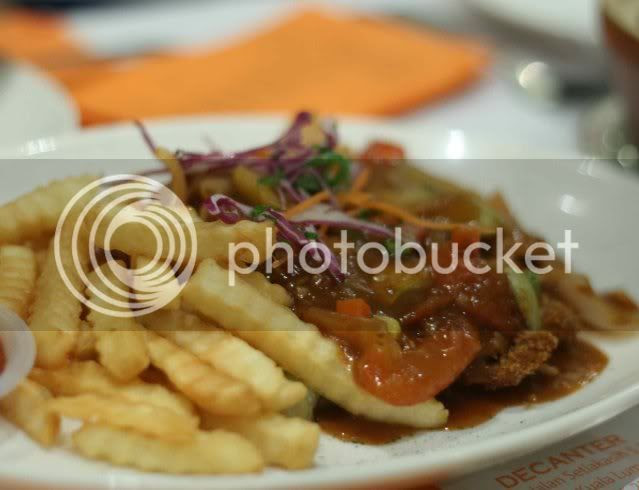 Hainanese Chicken Chop. Now, I am almost sure the moniker came about because some Hainanese flers must have been working as cooks for the British, in the good old days when we were part of the British Empire, and must have been instructed to prepare chicken chop, AND THEN passed on the recipe to their descendants, who eventually open their own coffee shops, and name it HAINANESE CHICKEN CHOP. I am PRETTTTY sure you cant find these in Hainan island. Rule Britannia!!! 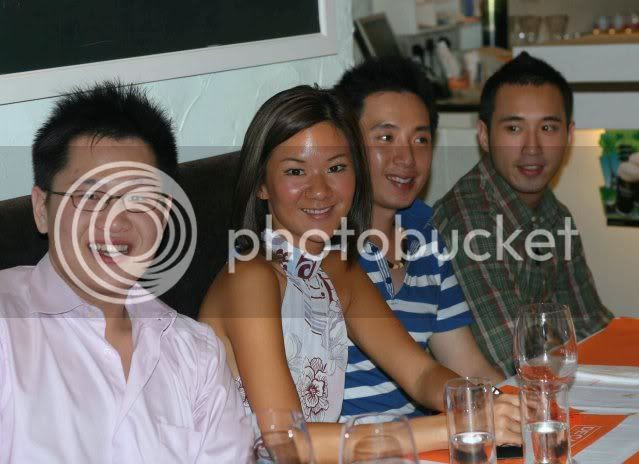 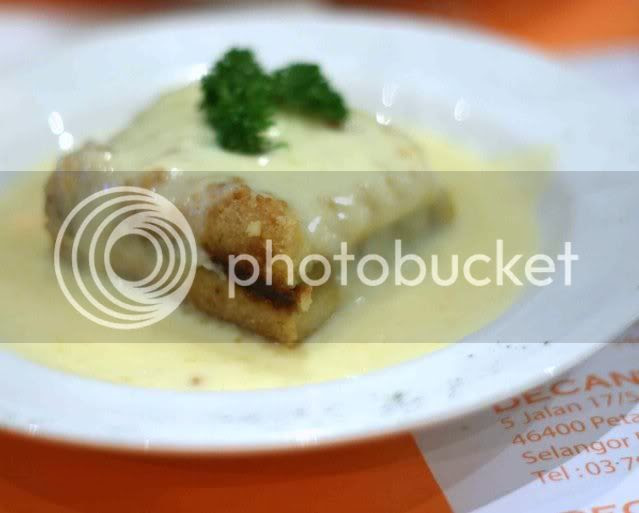 Peach and Banana Crumble. Different from the one I remembered from the original decanter, and I can't really taste the peach, but the crumble was yummy. Very buttery. However, I didn't care much for the custard sauce in which it swam. I'd have much preferred it with whipping cream, as the crumble was sweet enough on its own. Timothy on the other hand, indicated that he had a sweet tooth and liked it sweet. 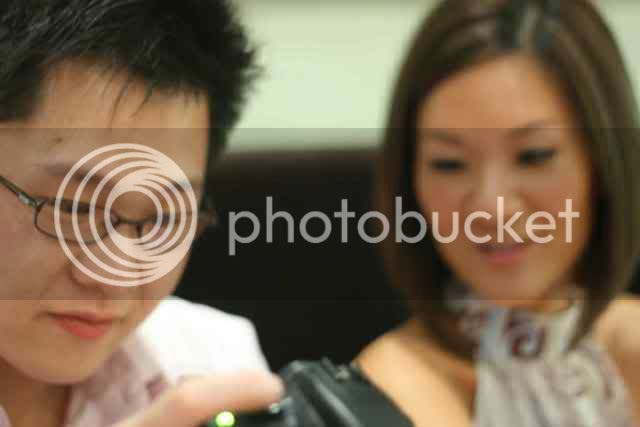 Admiring the shoot, all in a day's work.

I assume all the outlets serve more or less the same thing. To summarise, I reckon its a good place for wholesome, non pretentious food, in a relaxed atmosphere. Most of their outlets have easy parking, (Setiakasih 5, Setiabakti, Section 17, and Desa Hartamas...the latter being the hardest to park).

Of course, it helped that the manager, Timothy, was so accommodating and friendly, and made us feel very much at home. Thanks Ryan, for organising this, and thanks Timothy for being a great host.

from the glassy eyes to the duster to the ex-es, can tell that this place really means a lot to you hor. awwww...

back to the food, ohhh, oxtail stew! ya lor, some carbon would be good, pasta included!

oh, there's wifi there too, if i am not wrong.

yeah the food was quite decent..just uploaded my pics on flickr only..

I might try the lamb shank..been looking for a decent lamb shank in KL..got any to recom ahh?

Yeah...we used to have a pub liddat in the neighbourhood. Closed down many moons ago. And definitely did not serve such excellent food =)

Dusters. The only thing i remember most about dusters was that they normally came flying in my direction ;)

right... my wife told me about Decanter not long ago and wanted to go to their Damansara Heights outlet... but I never took her there. If she read this... she'll beg me to go next month for sure

I go to the Setiabakti outlet most since it's quieter. Must try the oxtail stew next!

We used to hang out in the Damansara outlet a lot couple of years back. Good food and affordable beers!!

i had the oxtail stew during the launch and it was yummy. my boiboi mopped up the gravy with the crusty french bread!

Didn't they (during the time of the 2 sisters) used to have very good, ie. lardy, fried meehoon? I remember having it a few years ago at that middle-of-housing-estate outlet (can't remember the road name, but it's the one with GDP architects) - full of cheeyauchar goodness!

GFAD, it must be your imagination...the establishment, even under the two sisters, were very muslim friendly, and devoid of all delights porcine...

babekl, yup, assam laksa is now their signature dish. sigh, i had to rush off at that launch...

toyboy, i dun remember the beers being affordable, but i guess its relative.

bangsar babe, the setiabakti one seems VERY quiet...havent been to the original one in yonks...

thule, congratulations! well, once her confinement is over, i am sure you guys will go on eating spree...

unkaleong, why dusters came flying your direction? too much flirting issit?

TNG, my friends at ISTHMUS in Northpoint used to make the most divine lamb shank, dunno if they still do.

hairy berry, us destitute ppl got no fancy gadgets, so wifi or not, no diff...

ciki, what else could you have meant?

jules, yup....but i wonder if they still had their signature fried rice from days of yore...

yeah my late grandpa made good western fare, he's Hainanese (so am i). the term probably came from the Hainanese of yesteryears workin as chef/servants to westerners in our country.

Yes blackboard really "simplifies" the food... whacking the duster was never a coveted task for me, but somehow, the blackboard just works and screams, eat up!

No old dishes? where is the fried rice that you once raved about :P

ciki, who u calling ugs? wait la, let ppl respond first before changing... might take months though, if the facebook add was anything to go by.

Looks good! I recently hosted my best friend's 30th birthday at Decanter Setiabakti and was much impressed by their service...

Of course it helped that we had not one but TWO cakes by Klang Valley's favourite celebrity baker... ahem, er, you. :D

okay fbb you got me figured out; maintaining figure was one thing, the tom-yam was burning with fire!, If you recalled my irritable coughing. I agree with you on prawn yee mee was abit on the clean side, I believe alot of people have had the heavier version, partly due to wok fire or the shaoxin wine being added as flavoring, this one lacked of that grimmy finish but its making up for the essential prawny sweetness. James totally loves the stew and was in reminiscent of the old flavor his mom used to make him as a kid, while you yearned for some rice, he was thinking of some hot mashed potato, I was thinking how come there werent much meat on it. lol, anyway, another great blog by fbb, always filled with subtle sacarsm with overt compliments.

I used to love going to the original, love the piping hot banana peach crumble with custard. Wonder if it's still good!

Thanks for the comments and support ladies and gents =)

thanks for having us, tim.

RK, hahah, glad you enjoyed the post. yeah, all of us were yearning for carbo, all too polite to ask.

LFB, i really must get round to trying out the one at setiabakti, but now that i know tim, it makes more sense to go to decanter too i guess. i like going back to places where i know the flers.

Funny, we had that chat one rainy night this week about being called "NORM" in everyone's neighbourhood bar/restaurant, and I hadn't realised you had written that on your post!

Unknown said...
This comment has been removed by the author.
5:13 AM

Went to the Decanter Hartamas based on this review and was thoroughly dissapointed. Even though the ambience was great (quiet and relaxing) the food was not that great anymore.

Asam Laksa
- Bland. Left me and my partner very unsatisfied.

Chicken chop
- Gravy on the was a little too sweet. I'm Hainanese myself, so trust me I know. You want authentic? Try Yut Kee in Dang Wangi

Banana Peach Crumble
- Ahh... this was a classic. NOT baked well as it was still very uncooked/floury. The fruit in it too was mushy and felt like it had been in the freezer for just a bit too long.